Top 10 most beautiful birds in the world

Birds are some of the most unique and gorgeous creatures on the planet! What is the most beautiful bird? It is unlikely that anyone will be able to answer this question because each species has unique characteristics and appearance. Nature has awarded many birds with incredible color shades and indescribable grace. These flying creatures are indeed the epitome of beauty and freedom!

Identifying beauty leaders is challenging, but we have compiled a list of stunning specimens! Watch and enjoy. We present a ranking of the most beautiful birds in the world: top 10 photos with the names of the majestic living creatures of the Earth-rare species of individuals of the planet.

These are the top 10 most beautiful birds in the world. 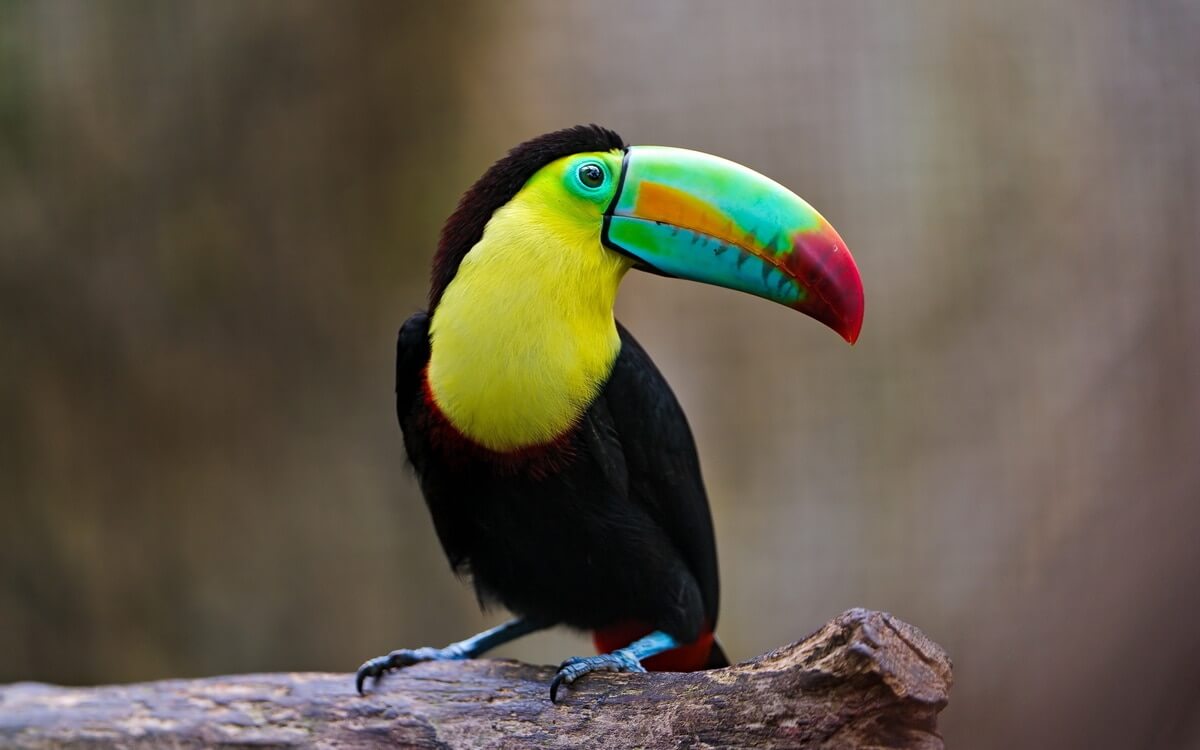 Toucan is a remarkable, bright bird that stands out among birds not only for its color but also for its unique temperament. The Toucan is considered an exotic bird, but today it can be seen in many zoos.

They are easily tamed, which makes it possible to keep them even at home. The Toucan family includes many species, but they are all very similar. First of all, I would like to note their bright and large beak – everyone has it, and inside it, there is a long tongue with which birds pick up food. 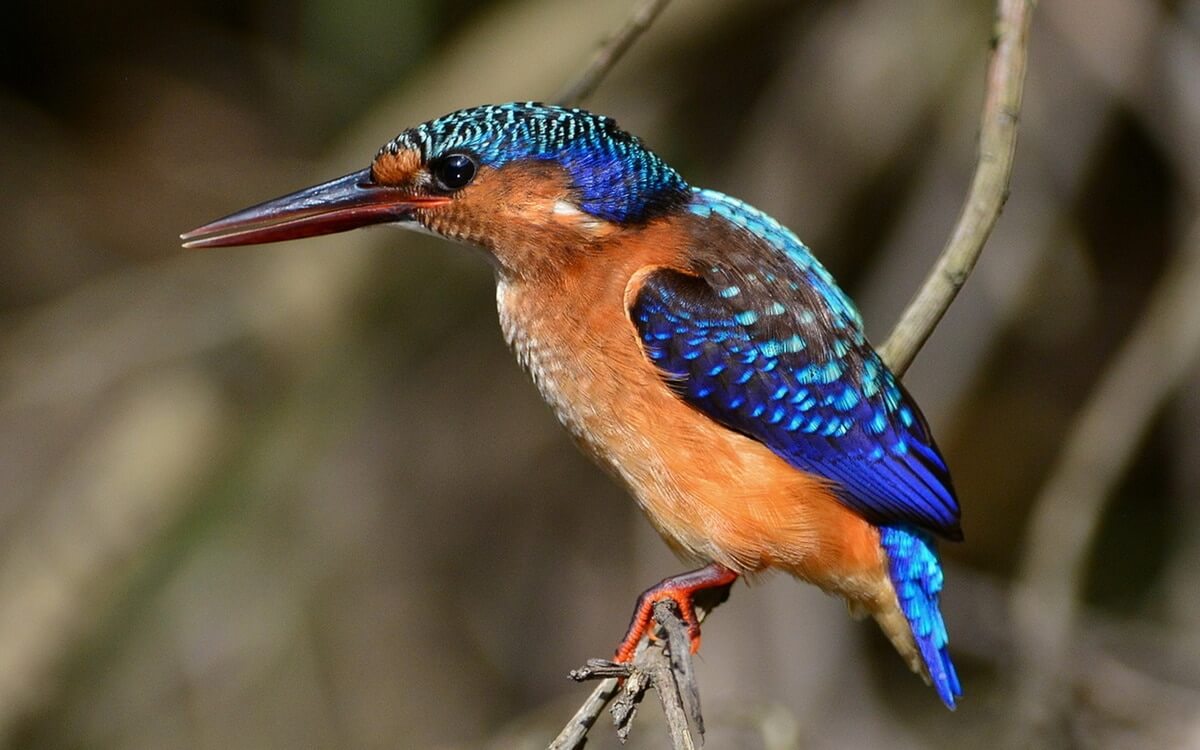 A kingfisher is a miniature bird, almost identical to a sparrow. The bird is resistant to low temperatures and lives on a vast territory from Africa to India.

The kingfisher family includes a wide variety of birds that differ from each other in size, color, and habitat. Males and females of birds do not vary in color, but males are more prominent.

The kingfisher is a bird that prefers silence and a solitary lifestyle, and they try not to meet the person. Their singing resembles the chirping of representatives of other birds-sparrows and is not very pleasant to human hearing. 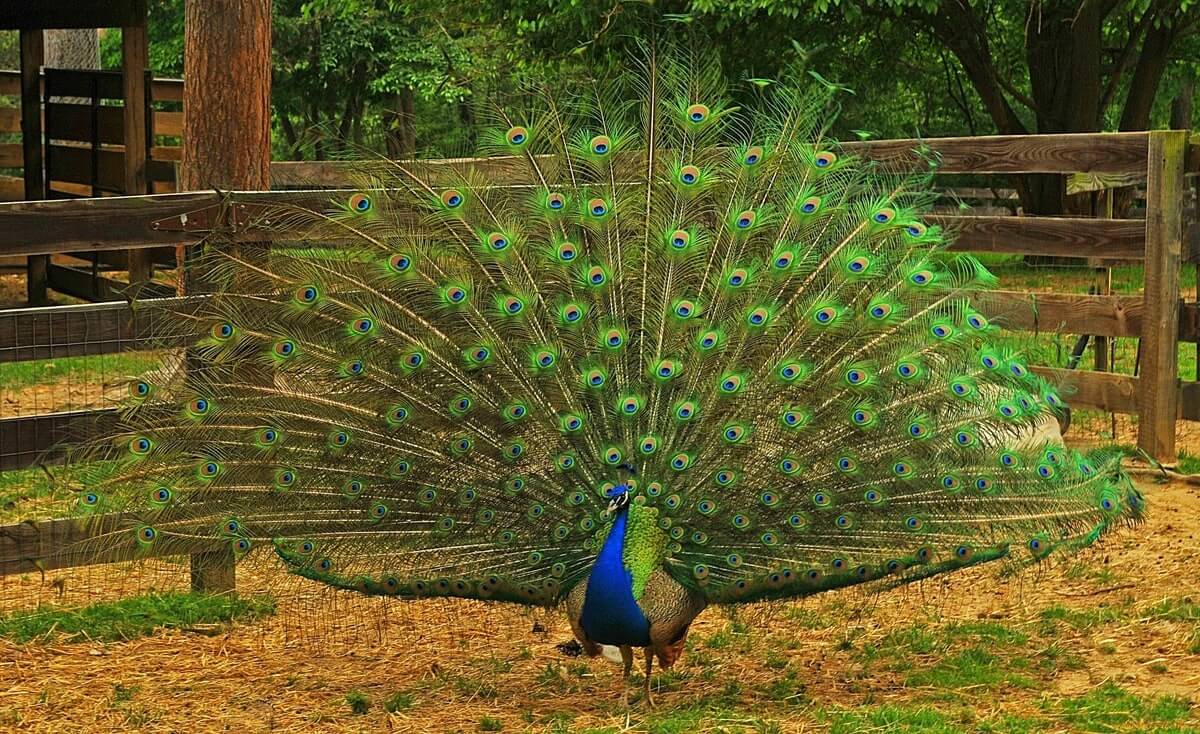 When it comes to the most beautiful birds, the peacock immediately pops up in the image, and this is not at all surprising because its tail has a fabulous, enchanting beauty!

These birds have very graceful necks and small heads with a funny crest. The crest of the male and female is different – for the former, it is blue, and for the latter, it is brown. As for the voice, if you have heard what it is, you will agree that it is not very pleasant.

In the plumage of this beautiful bird, there are the following colors: part of the sternum and neck are blue, the back is green, and the bottom of the body is black. Interestingly, nature has given only males luxurious tails, while in females, the rear consists of grayish-brown shades.

Interesting fact: the peacock symbolizes pride, an emblem of immortality and beauty. In India, the peacock is a symbol of the Buddha. 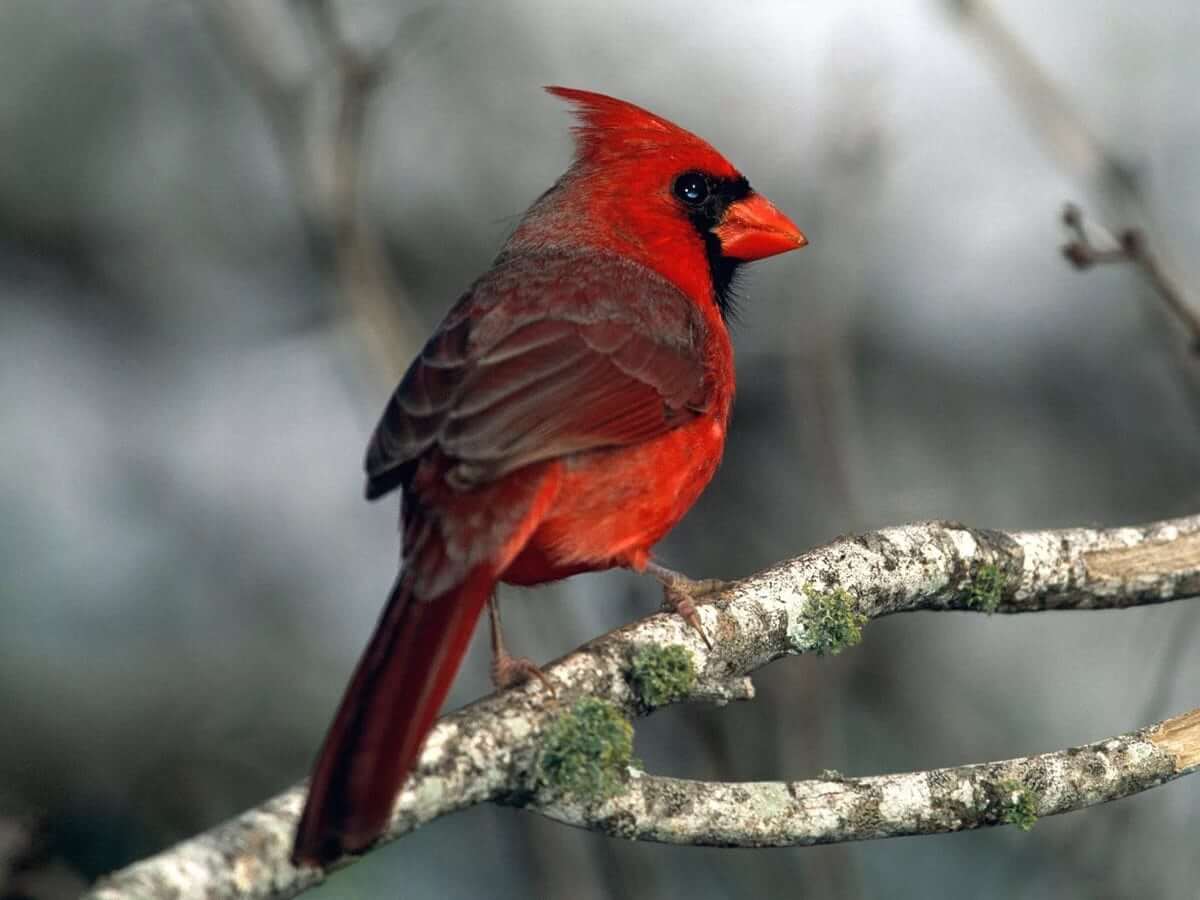 The most beautiful bird of bright color can be seen in the eastern United States, Mexico, and southeastern Canada. It has become one of the symbols of the Christmas holidays in America, Canada, and Mexico.

A medium-sized bird has a crimson color, a funny crest on its head, and a black mask. The female differs from the male – in its color, there are more grayish-brown flowers, and on the breast, wings, and crest, you can notice reddish feathers.

Cardinals live in natural forests close to humans, such as parks. In addition to the brightness and incredible beauty, the red cardinal is also famous for its singing, which resembles the trills of a nightingale. Birds live together, forming a pair for life. 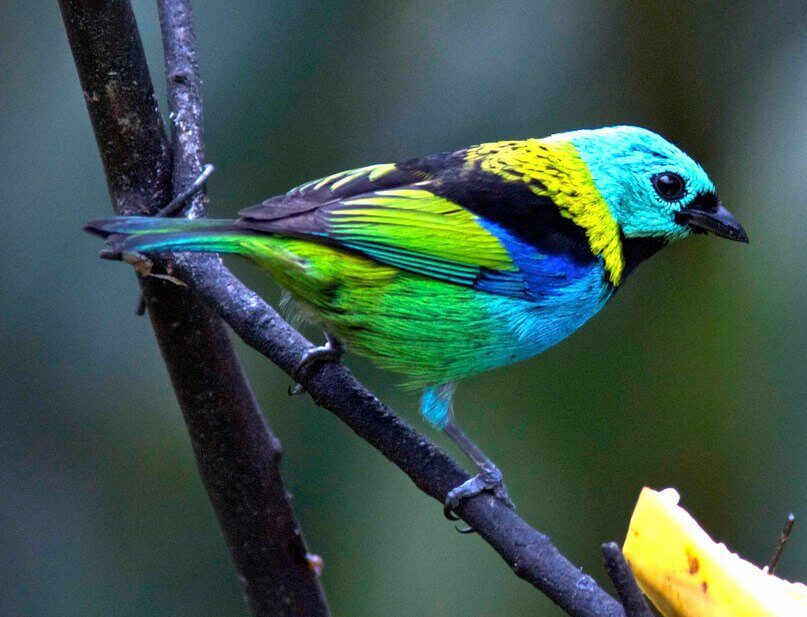 The green-headed tanager is found in southeastern Brazil, Paraguay, and northern Argentina, and the bird is listed in the IUCN Red List.

A small colorful bird skilfully sneaks among the tropical foliage, so it isn’t easy to notice. Its color is blue-green, which contributes to the fact that the manager remains unnoticed among the rainforests.

The green-headed tanager does not hunt alone; a representative of this bird species is a family creature and travels in large groups, usually including no more than 20 birds.

There is nothing more beautiful than watching Tanagra in flight! Its plumage contains the most saturated colors. You look and understand how unique the living nature is! 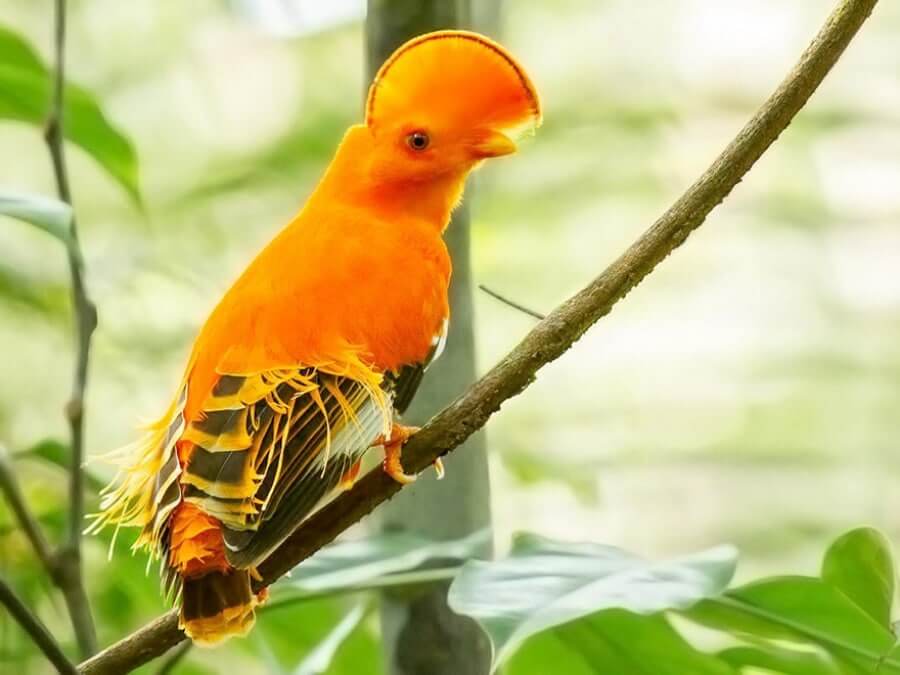 The Guianan cock-of-the-rock is a relatively rare and fantastic bird. This natural wonder can’t see its beak behind its bright feathers, but it’s there!

The bird’s name is confusing because you automatically refer to the Guiana cockerel as a chicken, but it belongs to the order of passerines. On the head of the cock-of-the-rock there is a small comb covered with feathers. In length, they grow to about 35 cm.

It is not difficult to distinguish a female from a male – the female has a more subtle color (dark brown) and is inferior in size to males. The Guianan cock-of-the-rock has almost all its feathers bright orange. 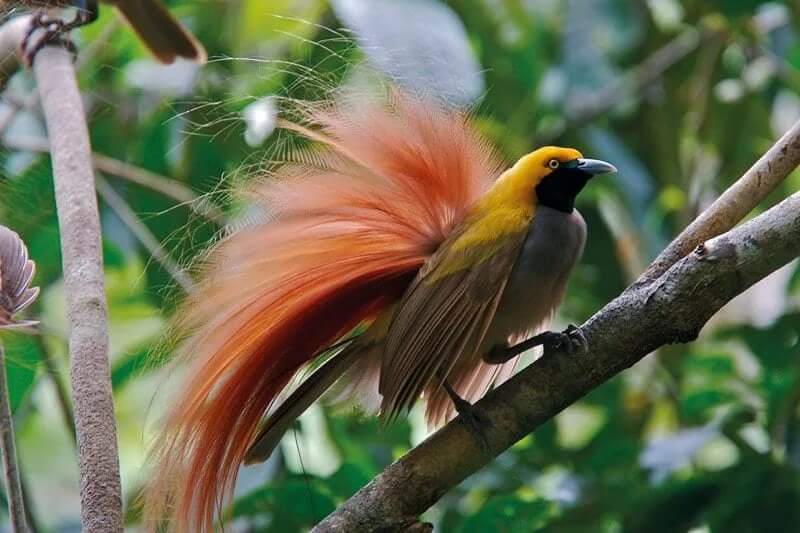 The lesser bird of paradise lives in the forests in the north of the island of New Guinea. These representatives of birds have a pronounced sexual dimorphism – females are smaller in size and have a brown color, while males have a wider tail and brighter color.

The bird reaches 32 cm in length and prefers to live alone, and few of the species of birds live in pairs.

Birds of paradise have a sharp voice that you can hear both in the morning and evening. From food, these birds prefer fruits and insects. 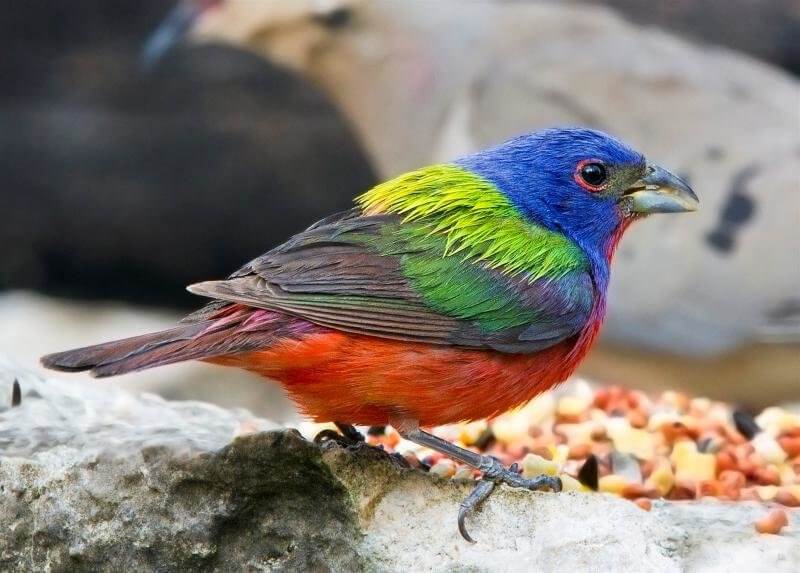 The painted bunting is a small bird common in the United States and Mexico and spends the winter in the Bahamas, Panama, Cuba, and Jamaica.

The painted bunting is an unusually timid and mysterious bird; the female and male colors differ. The female has a lemon-greenish crown, back, and nape, while the male has a blue head and red underside.

Gorgeous bunting is a beautiful little bird and a great singer! The male climbs high up a tree and sings. 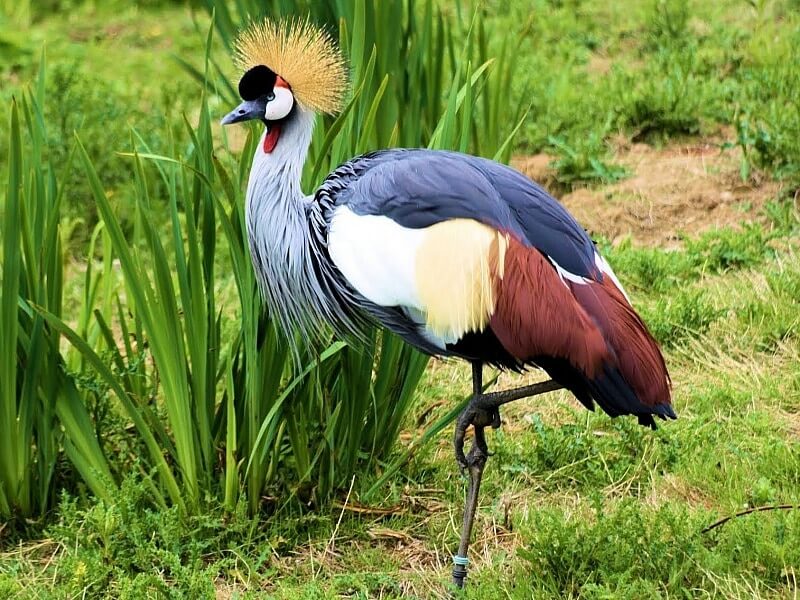 The most beautiful and large bird is listed in the Red Book. The number of representatives of the species is tens of thousands of individuals, but since the swamps are drying up, where crowned cranes live, and for several other reasons, they need to be taken care of. 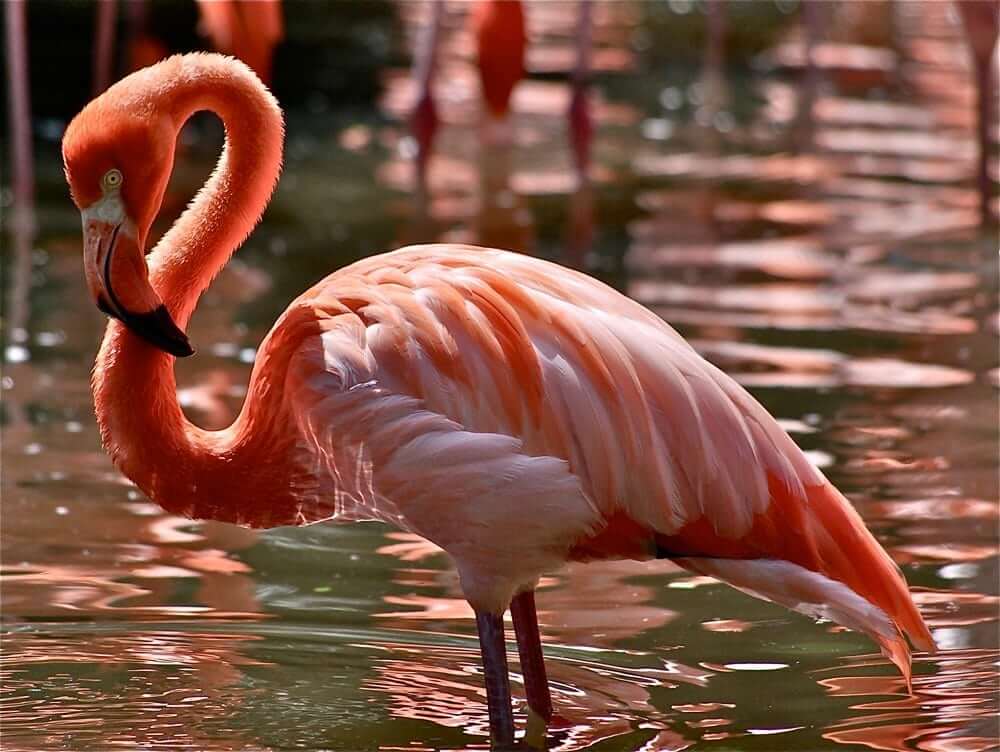 Flamingos are one of the brightest representatives of the bird kingdom! Characteristic external data of the bird: high growth, curved long neck belly, resembling a barrel. On its small head is a massive beak.

It moves due to its long legs, called stilts. The color scheme of the bird species includes shades of pink, but the flight feathers and beak of the flamingo are black.

Interesting fact: the flamingo bird often stands on one leg, and there is an explanation for this. According to numerous studies, it turned out that birds are more comfortable standing on one leg.