Top 10 biggest horses in the world

The need for huge and biggest horses arose back in the Middle Ages. The horse had to withstand the weight of not only a knight in heavy armor but also numerous weapons adjacent to it.

There is a version that some modern breeds have the roots of knightly war horses, which were called destrier. Trotters reached 2 meters in height and weighed up to 1 ton. Their distant relatives are the Percheron from French, Shire horse from the UK, and Belgian Brabant horse. The biggest horses in the world belong to these breeds.

Heavyweights Percherons are not only the strongest but also most powerful horses as well as most graceful. In growth, they reach 1.75 meters. The breed was designed for heavy work, as well as horseback riding.

British heavyweights Shire are slow. But, despite this, they are very hardy and can withstand weight five times their own. The average height is 1.7 meters and 1.2 tons in mass. But among the Shire, there are a lot of champions who can be more than 2 meters tall.

Belgian horse reaches 1.7 meters at the withers, also have their own record holders. This species was bred by crossing Flemish and Ardennes breeds. The result is a very powerful and durable trotter, designed for heavy work.

Another breed called the Russian heavy draft is distinguished not only by its size but also by its enormous endurance. The formation of the breed took place at the turn of the 19th and 20th centuries. by crossing the Ardennais with Percherons and Belgian horse. The result is a powerful and resilient horse. Its height can reach 1.7 meters, and its weight can reach 1 ton.

These are the top 10 biggest horses in the world 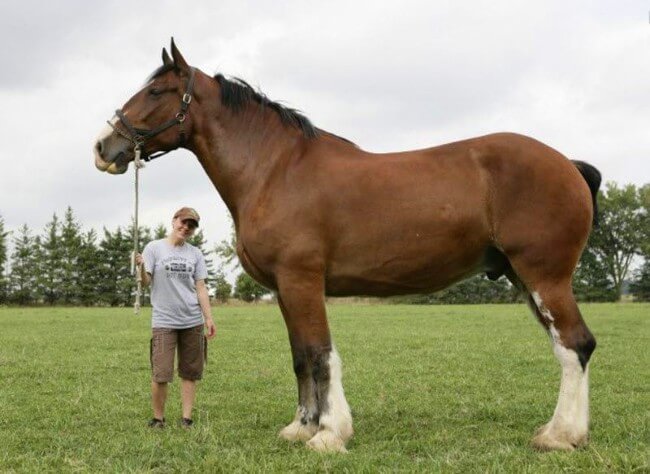 The first place among the biggest horses in the world is held by Poe horse, named after the popular writer and poet Edgar Allan Poe. The gelding reaches almost 3 meters in height and weighs about 1.5 tons. On the day, the stallion absorbs several kilograms of grain, hay and quenches his thirst with eight buckets of water. 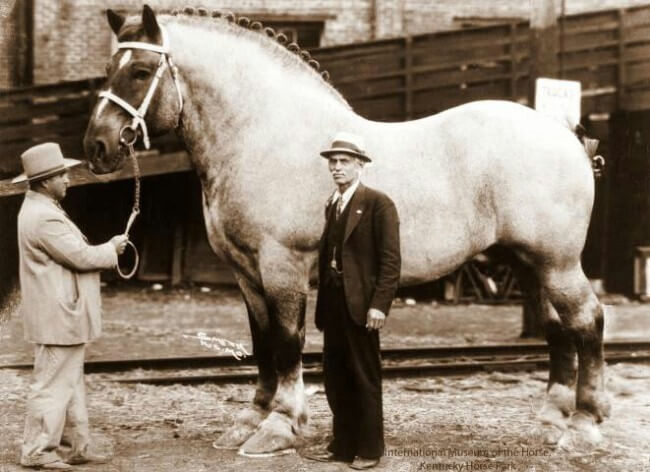 The ranking of the largest horses in the world was previously headed by the Great Sampson, but now it is in second place. The stallion had incredible dimensions and reached 2.20 meters at the withers, and its body weight was about 1.5 tons! The animal lived in the 19th century in England and belonged to the Shire breed.

Having reached the age of four, the horse was already considered the strongest and largest not only in its country but also on the entire planet. The second nickname of the stallion is Mammoth. Only the next stallion managed to surpass the size of Samson. 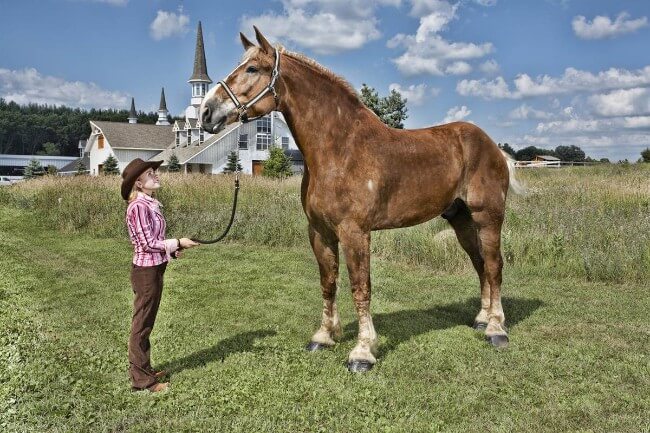 The Belgian gelding Big Jake, included in the Guinness Book of Records, is in the third position among the biggest horses in the world. An eleven-year-old horse reaches 217 cm at the withers and has a bodyweight comparable to an SUV: its weight is 2600 kg. It lives in Michigan, USA. A stall of 36 sq.m. was built especially for it. In their youth, Jake was distinguished by a violent disposition, which sometimes did not even obey the owner.

With age, Big Jake settled down and became a real star, taking an active part in various talk shows. An interesting fact is that the animal took part in the tour with the tiniest horse on earth, named Einstein. And its impressive size does not prevent it from gracefully performing on stage, gathering tens of thousands of spectators. In 2010, Big Jake was officially recognized as the largest horse on the planet. 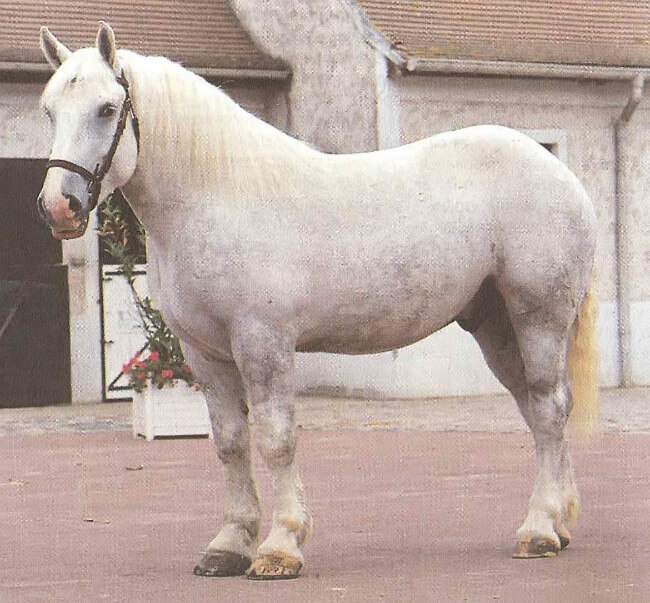 The Moroccan stallion of the Percheron breed was one of the largest in the world. Its weight was about 1300 kg, and its height at the withers reached 2.15 meters. Almost no documentary facts have survived about this giant, except for one photograph. 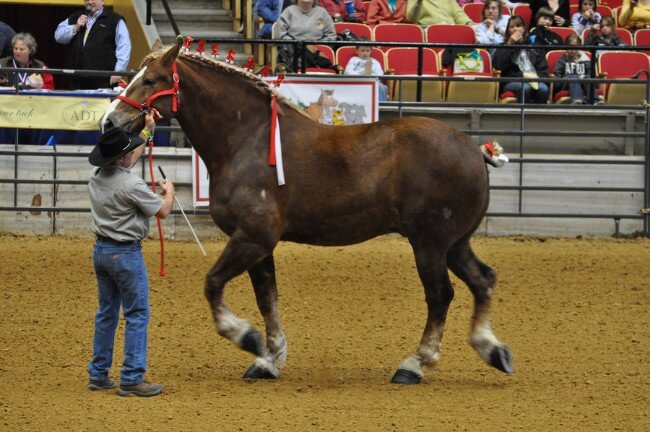 French Percheron stallion Dr. Le Ger was born in 1902. The height of the gelding at the withers reached 2.13 meters, and it weighed as much as 1400 kg. Usually, the size of this breed ranges from 1.7 to 1.8 meters, but the Doctor managed to break the records. 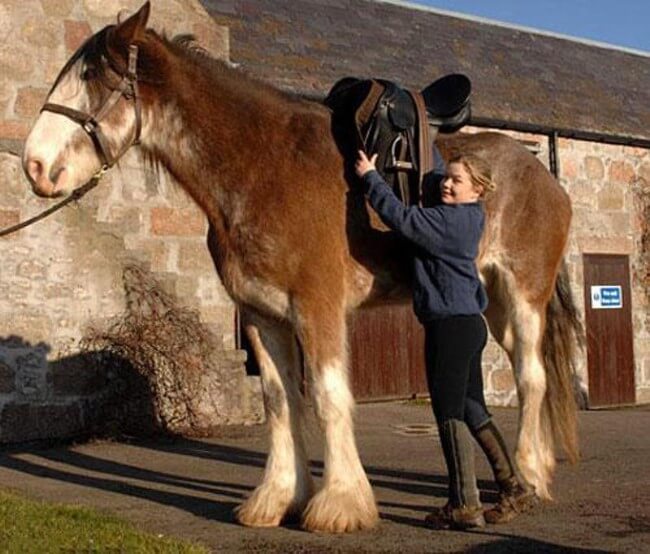 The British gelding Duke has ranked sixth among the biggest horses in the world. Today, Duke’s height is 2.07 meters. The owner of the horse claims that a special diet, including an unusual variety of apples and herbal infusions, helped to achieve this size of the horse.

Duke’s growth has not stopped yet and every year it adds a few centimeters. There are all the prerequisites that this particular animal will set a new height record soon. The pet’s daily diet consists of 10 kg of grain and ten buckets of water and 20 liters of herbal tea. Despite its impressive size, Duke is a coward and does not tolerate rodents, which it is afraid of in a panic. 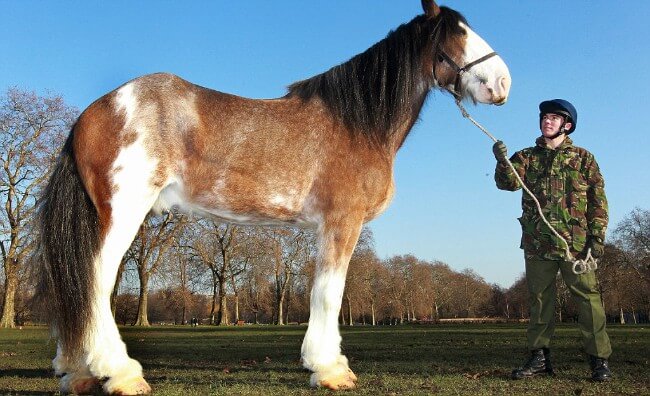 A giant shire named Gold Digger is the seventh biggest horse in the world of all time. A stallion with a bodyweight of 1200 kg currently reaches 2.02 meters at the withers. And in its four years, (a very young age for a horse) Digger grew to 196 cm.

Its unceasing growth and remarkable appetite seriously disturbed the first owner and it passed it on to another farmer for training. When Digger turns 12 years it feels great, eats one and a half meter haystack every day. 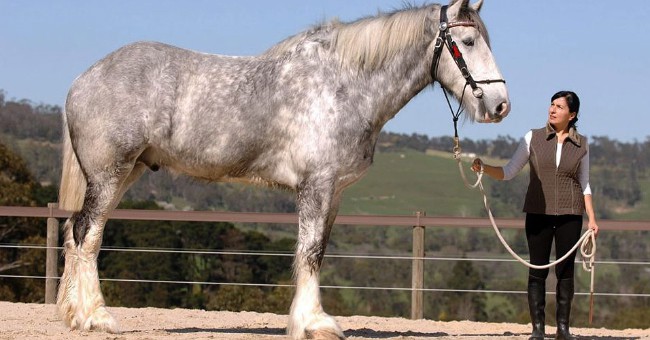 A Shire horse named Noddy from Australia is ranked eighth. Luscombe Nodram (full name) has a height of 2.05 cm and a bodyweight of 1300 kg. With its massive build, Noddy went to its grandfather Edward, which live in England, which also held the record for height. The maintenance of the giant costs its owner D. Greenman at all not cheap, so he himself has to earn money on the farm. Although for a stallion with such a weight and height, it is very difficult to transport goods. 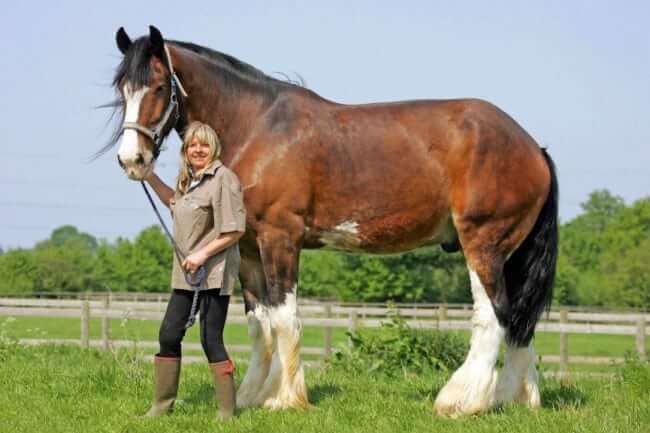 The Florida Cracker Horse is the ninth biggest horse in the world. It is so tall that its owner has to climb onto it with a stepladder. The weight is 1200 kg and the height reaching 1.98 meters at the withers makes it a giant.

Florida Cracker Horse maintains its weight with an unpretentious diet: 2 bales of hay, carrots, 130 liters of water. And it loves sugar very much. Despite his dignity, Florida Cracker is very friendly and obedient. The owner calls it a gallant gentleman. The stallion enjoys enviable popularity and has been a television star since birth. 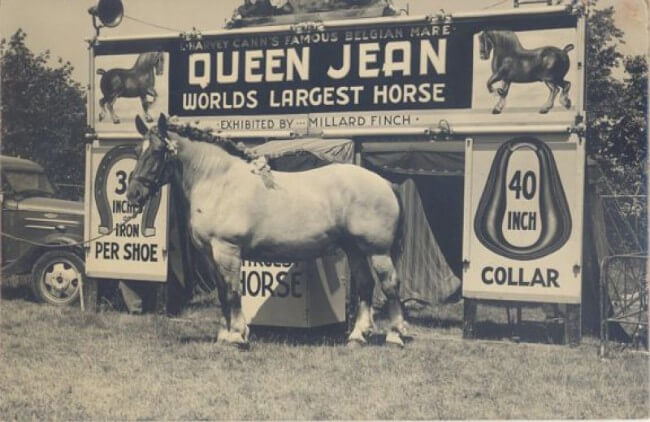 The giant Brooklyn Supreme of the Bronson breed is ranked tenth among the biggest horses in the world. Having reached the age of ten, the horse weighed 1450 kg and reached a height of 1.98 meters. To shoe a colossus, horseshoes of 3.5 kg each are required, when an ordinary average horseshoe weighs up to 700 grams. Brooklyn lived twenty years in Iowa. It should be noted that horses of this breed are not only the largest in the world but also the most expensive.