Top 10 fastest birds in the world

Fastest birds: Birds are rightfully considered to be the fastest living creatures on the planet. Moving in the air, flyers can develop tremendous speed. Some species of birds can compete in aerial flight with the first created aircraft.

The rating includes the fastest birds in the world 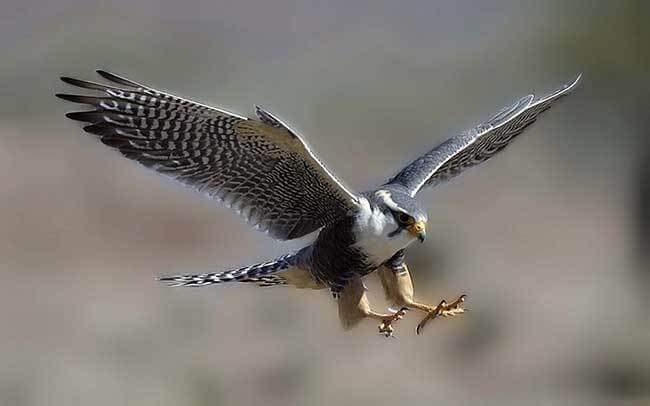 Peregrine Falcon is the fastest flyer on planet Earth. This bird belongs to the Falconidae family and has the widest habitat – all continents, excluding Antarctica. Its wingspan during flight is 1.1 m. When prey dives, it develops a speed of up to 350 km / h, this distance is about 1 km per minute.

The body of an adult peregrine falcon can reach half a meter in length, and a bird can gain weight up to 1 kg. It loves to hunt medium-sized birds – pigeons, blackbirds, starlings, and ducks. Sometimes small mammals can become their victims. For habitation, the bird chooses inaccessible places which are most often rocky shores of reservoirs. 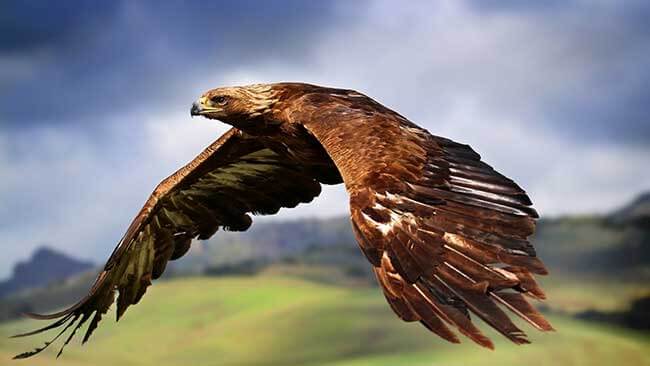 The golden eagle is one of the fastest flyers, capable of gaining speed up to 320 km / h in flight. It is a bird of prey that belongs to the Accipitridae family. The body length of an eagle can reach 1 meter, and its weight ranges from 3 to 7 kg. Its wingspan varies within 2–2.4 m. In search of prey, hunters are able to soar high in the sky for a long time, while their activity remains minimal.

Their movements in the air are light and maneuverable. Noticing the prey, the golden eagle rapidly picks up speed and rushes to the prey. The predator chooses birds, rodents, and hares as its feed. It can also profit from large, sick prey in the form of roe deer, deer, sheep, and calves. The habitat of the golden eagle is quite wide and includes most of the Holarctic, Alaska, Canada, Scotland, etc. It can also be found throughout the forest zone of India. 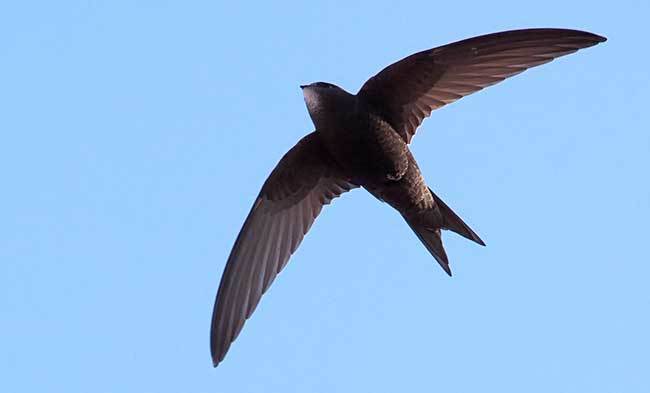 The White-throated needletail unlocks the top three fastest birds in the world. A flyer of the Apodidae family with a wingspan of 55 cm is capable of gaining speed in the horizontal flight of 170 km / h. Its body length reaches 22 cm, and its weight is about 150 grams. White-throated needletail can be found in South Asia, the Far East, and Siberia. For settlement, they choose groves and forests near water bodies. The peculiarity of these flyers is that they never land on the ground. 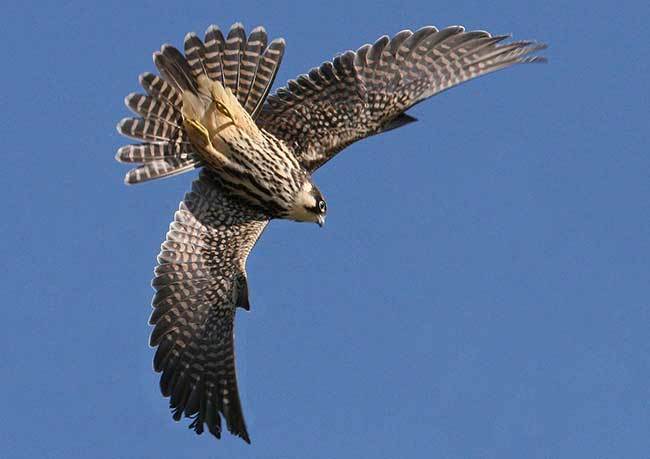 The Eurasian Hobby is a small bird of prey of the Falconidae family and is one of the fastest birds in the world in terms of flight speed. With a wingspan of 80 cm, the hobby is capable of speeds up to 160 km / h. Outwardly, it looks like a peregrine falcon but differs in size, which is 28-36 cm.

The flaps of its wings are fast and maneuverable, alternating with sliding, acquiring the shape of a sickle. The flyer is widespread throughout the continent of Eurasia and prefers to settle in forests and forest-steppe zones. Since it is a predator, it feeds on small birds, as well as large insects like beetles, butterflies, and dragonflies. Less often, mice and other small animals become its delicacy. 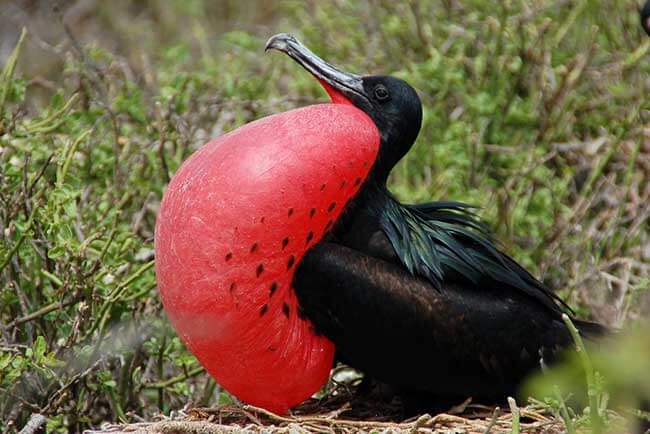 The Frigatebird is one of the fastest flyers in the world, gaining speed up to 150 km / h. Most of the time Frigatebirds prefer to hover in the air without moving their wings. They have rather long and narrow wings, the span of which can reach 2.5 m. With an increase of 1.1 m in length in body weight, they can reach 1.5 kg.

Skillful flyers move around rather awkwardly and cannot swim. A distinctive feature of the male is an inflatable red throat sac with which he lures the female. These birds have chosen tropical and subtropical islands as their habitat. They can be found in Australia and Polynesia. Since the Frigatebirds themselves cannot swim, they hunt flying fish or take prey from water birds. 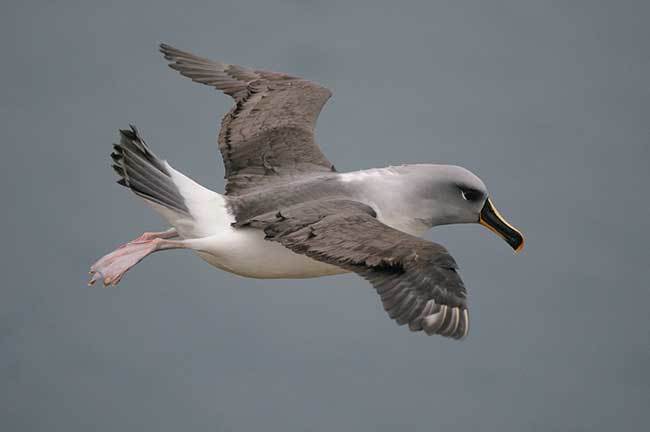 The Grey-headed albatross with dimensions of 81 cm in length and a wingspan of 2 meters can gain speed in airspace up to 147 km / h. For a very long time, it is able to stay in flight and in its entire life covers huge distances, Circumnavigation around the globe several times. Its habitat is the islands of the Southern Ocean. Gray-headed albatrosses feed mainly on squid, fish, and shellfish. They can dive to a depth of 7 m for food. 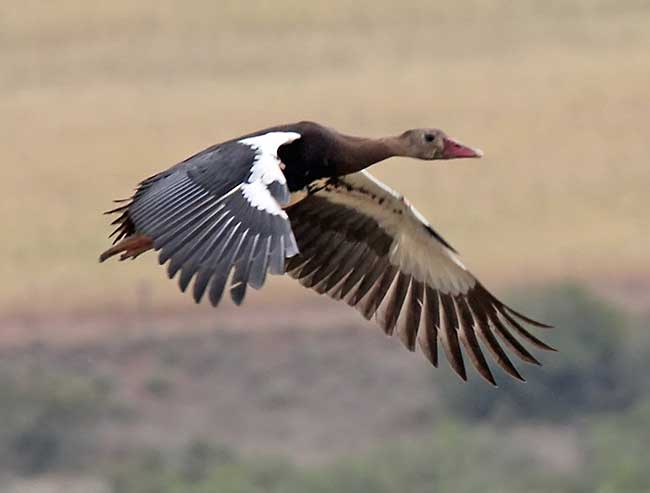 The Spur-winged Goose is one of the fastest birds in the world, capable of speeds up to 142 km / h in flight. This species belongs to the Anatidae family and is rather large: in length, it can reach 1 meter, and in body weight, it gains up to 6 kg. Males are larger than females.

The Spur-winged goose runs pretty well and nimbly on the ground, and in its manner of movement, it resembles a heron. It is common in South America, in particular in Namibia, Zimbabwe, and South Africa, and prefers to settle near freshwater bodies of water. It prefers aquatic and coastal plants, as well as insects and small fish as a feed. 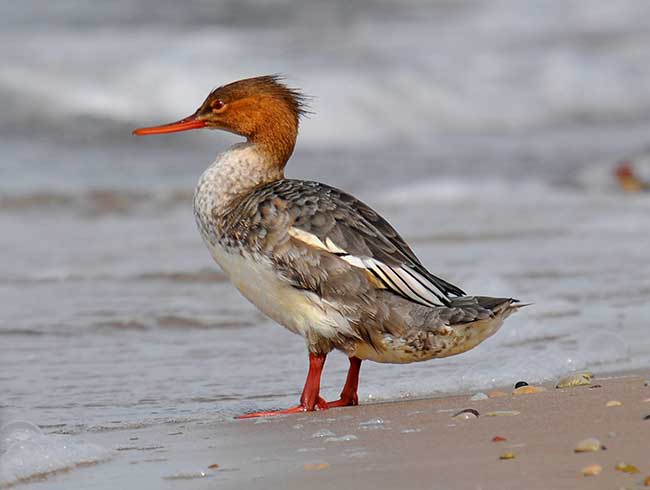 The Red-breasted merganser belongs to the Anatidae family and is considered one of the fastest birds in the world. In flight, it can pick up speed up to 129 km / h. The average merganser is rather large – its body length can reach half a meter, and its weight is 1.3 kg.

Like others in the Anatidae family, this species can swim and dive well. You can see the Red-breasted merganser in North America and Eurasia. For habitation, it chooses flowing lakes and rivers, where it feeds on fish, frogs, insects, and worms. 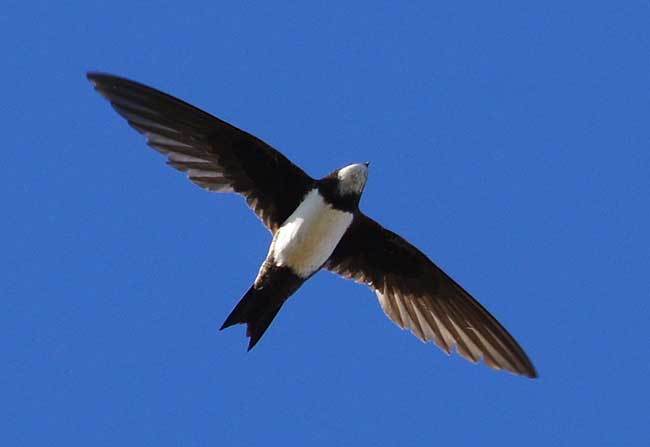 The Alpine Swift with a horizontal flight speed of 124 km / h is in the ninth position of the ranking of the fastest birds in the world. These are small birds, similar in appearance to swallows, are widespread in Europe, North Africa, and Asia. They choose rocky areas for habitation, but they also can live in urban environments.

The main food of the Alpine Swift is insects, which it catches in flight. They spend most of their lives in the air and prefer not to build their nests. 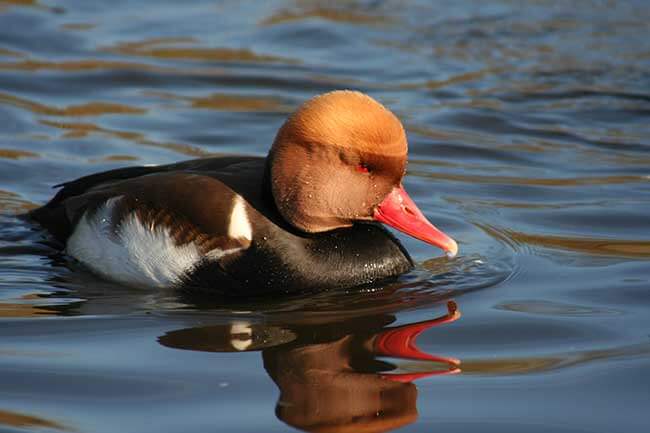 Pochard bird is a large waterfowl that ends the rating of the fastest birds on the planet. With a body length of 48 to 56 cm and a weight of up to 1.5 kg, the bird is capable of speeds up to 116 km / h in the air. Its flight is notable for its ease and longer duration among others from the Anatidae family.

In addition, the bird runs pretty fast and swims well. This species is widespread in Central Asia and Western Siberia. These birds prefer to settle near fresh reservoirs overgrown with reeds. The main food of the Pochard bird is seeds, aquatic plants, mollusks, and also fish.