Top 10 most beautiful butterflies in the world

Butterflies are one of the most beautiful creatures on the planet. They look like natural flowers. It is not for nothing that since ancient times these winged insects have been associated with spring, beauty, eternity, the rebirth of the soul. The Italians called them “flowers blown by the wind.”

In India, it was believed that witches turn into butterflies after death. After all, only they could take on the appearance of such beauty. And in other Asian countries, this is not just a beautiful creature, but also a delicacy.

The beauty of butterflies is created by the scales that cover their wings. The scales have ribbed walls, and when sunlight hits and refracts them, different colors appear.

It was the external data that elevated these insects to the pinnacle of popularity among collectors. About 200 thousand species of Lepidoptera are known.

These are the most beautiful butterflies in the world 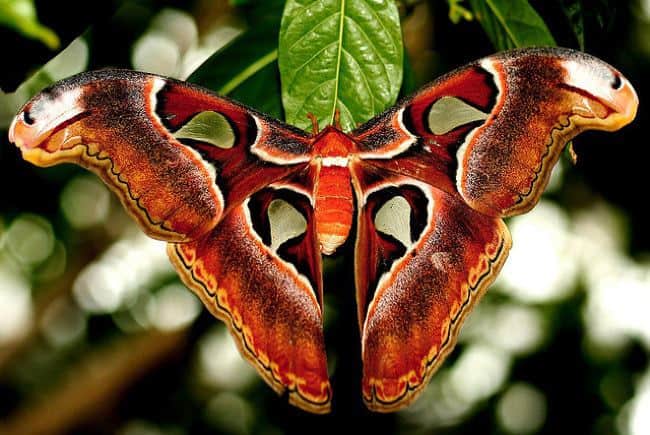 The rating of the most beautiful butterflies is started by the Atlas moth or the Prince of Darkness. Atlas prefers to lead an active existence in the dark, which is why it’s also known as Prince of Darkness. It is also the largest insect of its family.

Its wingspan can reach several tens of centimeters. The color and shape of the wings resemble the head of a snake. Thus, the Prince scares away animals that are not averse to feasting on insects. Its life span is only ten days. While still a caterpillar moth, it actively replenishes its body with nutrients, due to which it will exist, turning into a butterfly. 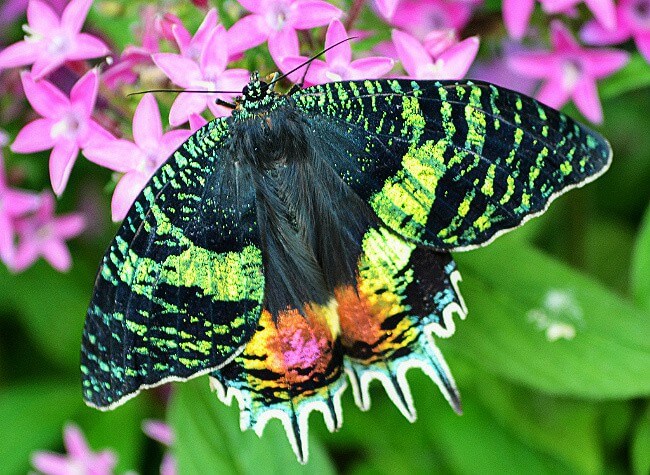 One of the most beautiful creatures of nature is the Chrysiridia rhipheus butterfly. These are rather large flying insects with a wingspan of up to 9 cm. Under a magnifying glass, you can see that the wings of Chrysiridia rhipheus are multi-colored scales that together form an amazing rainbow pattern.

On the edges of the wings, there is a white edging, which gives a special individuality and uniqueness to the appearance of the butterfly. Its bright, unusual coloring is a protective element from those who want to hunt for it. An unusual color signals to insectivores that these butterflies are poisonous. Chrysiridia rhipheus love daylight hours and are vigorous during the day. In the evening, a flock of beauties gathers in one place for the night. 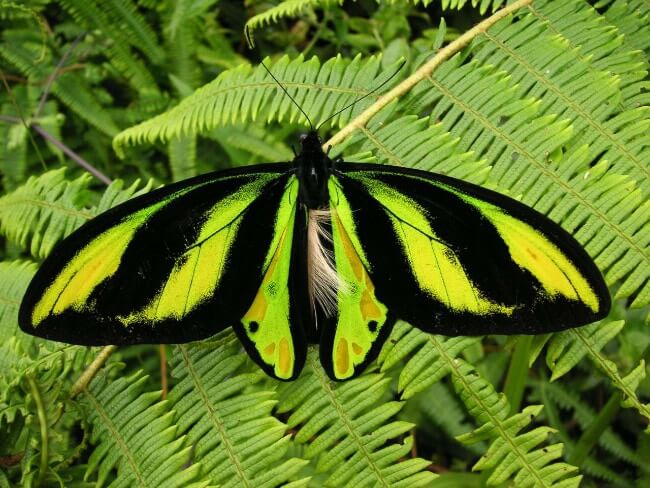 Queen Alexandra’s birdwing took the third position among the most beautiful butterflies, which is considered one of the most valuable pieces among collectors. The insect is found in New Guinea. Males are considered more beautiful than females, thanks to their amazing colors, which attract the attention of not only females but also aesthetes among people.

Their wings shimmer with the most delicate shades of green-blue and resemble graceful, narrow leaves of an outlandish plant. Females cannot boast of such beauty. In size, they are much larger than males. During the flight, they can create a wingspan of up to 28 cm. 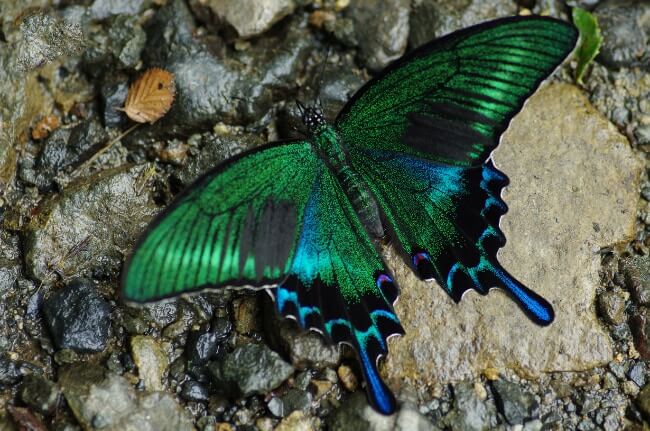 Alpine black swallowtail or Blue Machaon is not only one of the most beautiful butterflies, but also the largest in India. Males have an incredibly beautiful color, shimmering with a dark green tint, against which black fields appear. Often, males form clusters and settle near streams and rivers or on wet roads after rain. Soaring into the sky, the disturbed flock forms an amazing sight from an iridescent dark green cloud. 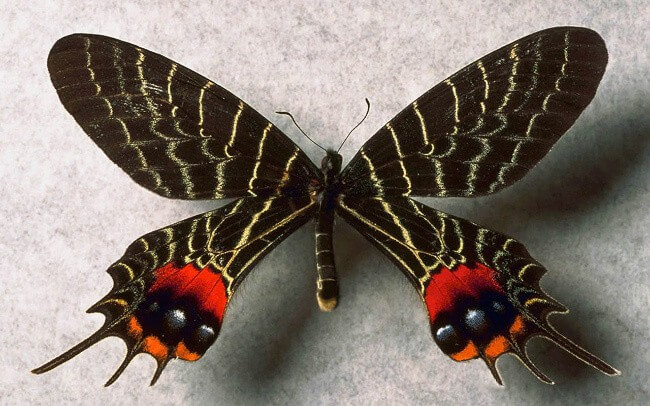 Mountain butterfly Bhutan glory ranks fifth among the most beautiful butterflies in the world. Its amazing shapes and peculiar color will not leave indifferent any esthete. The wingspan does not exceed 10 cm. Each wing has three bizarre tails at the back, which gives the arthropod a special zest.

Two bright red spots on the back warn winged hunters that they are inedible. The Bhutan glory has the ability to fold the rear fenders under the front ones, which makes it almost invisible. In India, these species of butterflies are protected. 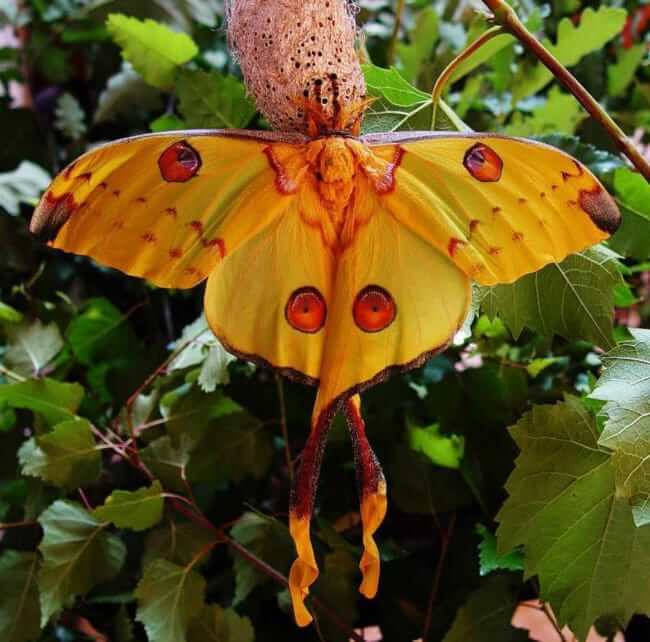 The Madagascan Comet moth is not only a real beauty but also the longest butterfly in the world. Behind its bright orange wings with brown eyes are decorated with twenty-centimeter tails, which tend to fall off literally after a few perfect flights. The life span of the Comet moth is calculated in just a few days. This winged insect lacks a digestive system and mouth, as it feeds on the accumulated nutrients that it received while still a caterpillar. 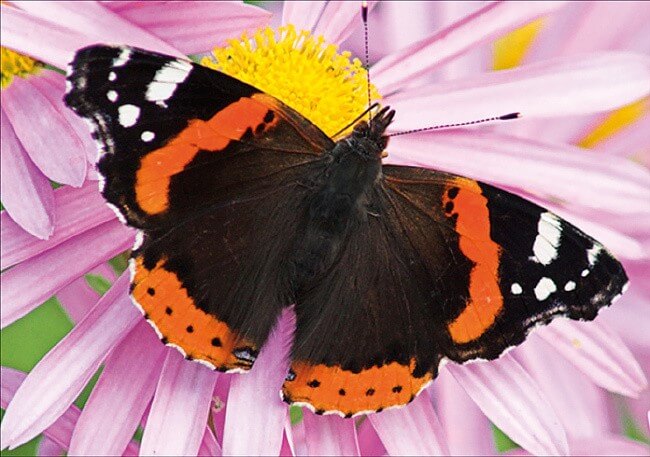 Among the most beautiful winged insects is the Red admiral butterfly, which got its name for its bright red stripes on black velvety wings with white spots. This relatively small beauty has a wingspan of only 5-6 cm. A special feature of the Red Admiral is that it makes long-distance flights in autumn, as it is sent to winter from Russia to Africa. The life span is about 9 months. 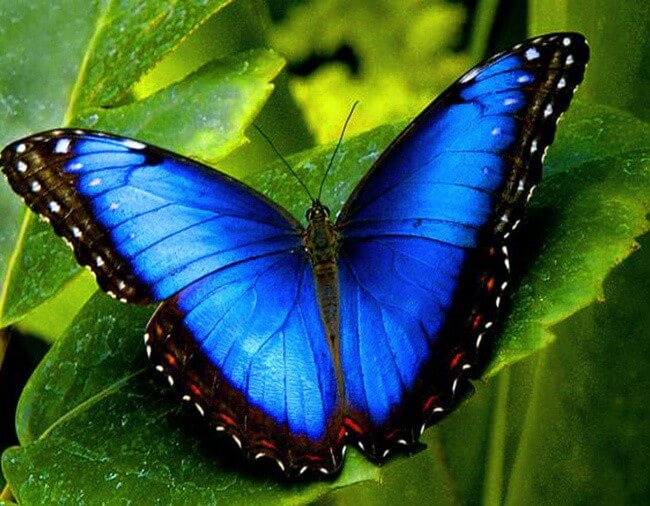 Blue Morpho or Morpho peleides, which means beauty in Greek, lives up to its name. Its shiny, blue-blue wing coloring has a black frame around the edges with called white spots. The unique shade helps to attract butterflies of the opposite sex and scare away its hunters. Blue Morpho’s life is not long and averages 2 weeks. A feature of this species is that males prefer to live in groups. 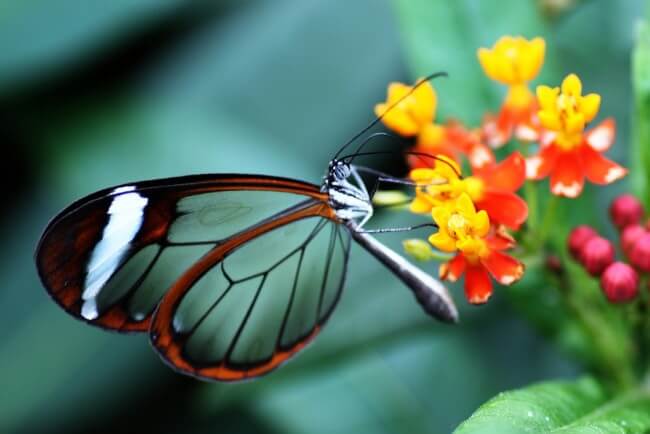 Greta oto or Glasswing Butterfly is one of the most amazing types of winged insects. The glasswing butterfly got its name because of the transparency of the wings. In Argentina and Mexico, this is the most common butterfly. One of the smallest creatures has wings with a span of 5 cm. Crystal-transparent wings are decorated with a red or brown border around the edges.

This species plays an important role in the ecosystem, as it participates in the pollination of most native plants. A feature of Greta Oto is that it prefers only poisonous vegetation as food. Accumulating many toxins in their little body, they become unattractive to insectivores. A glass butterfly can cover a distance of up to 12 km per day.

Peacock butterfly ends the list of the top 10 most beautiful butterflies in the world. Its small wings, the span of which can reach no more than 5.5 cm, are very brightly colored. On a bright red background, four iridescent spots resembling eyes are located at the edges. Peacock butterfly lives for about 9 months. For wintering, it goes to the cracks of the tree bark, where it waits for the arrival of a warm pore.