Sony decided to please the youth audience: the acoustic system Sony GTK-XB7 is primarily designed not for watching movies or classical music (although they are coping well with them), but for noisy parties. Even when the volume level rises to the maximum, the column does not rip to rattles but demonstrates the high quality of both the high and low frequencies. In this model, a beautiful backlight is also implemented: The diodes are built into the column.

Contents of the Article show
What is what?
How does it look?
How is it managed?
How does it sound?
What in the end? 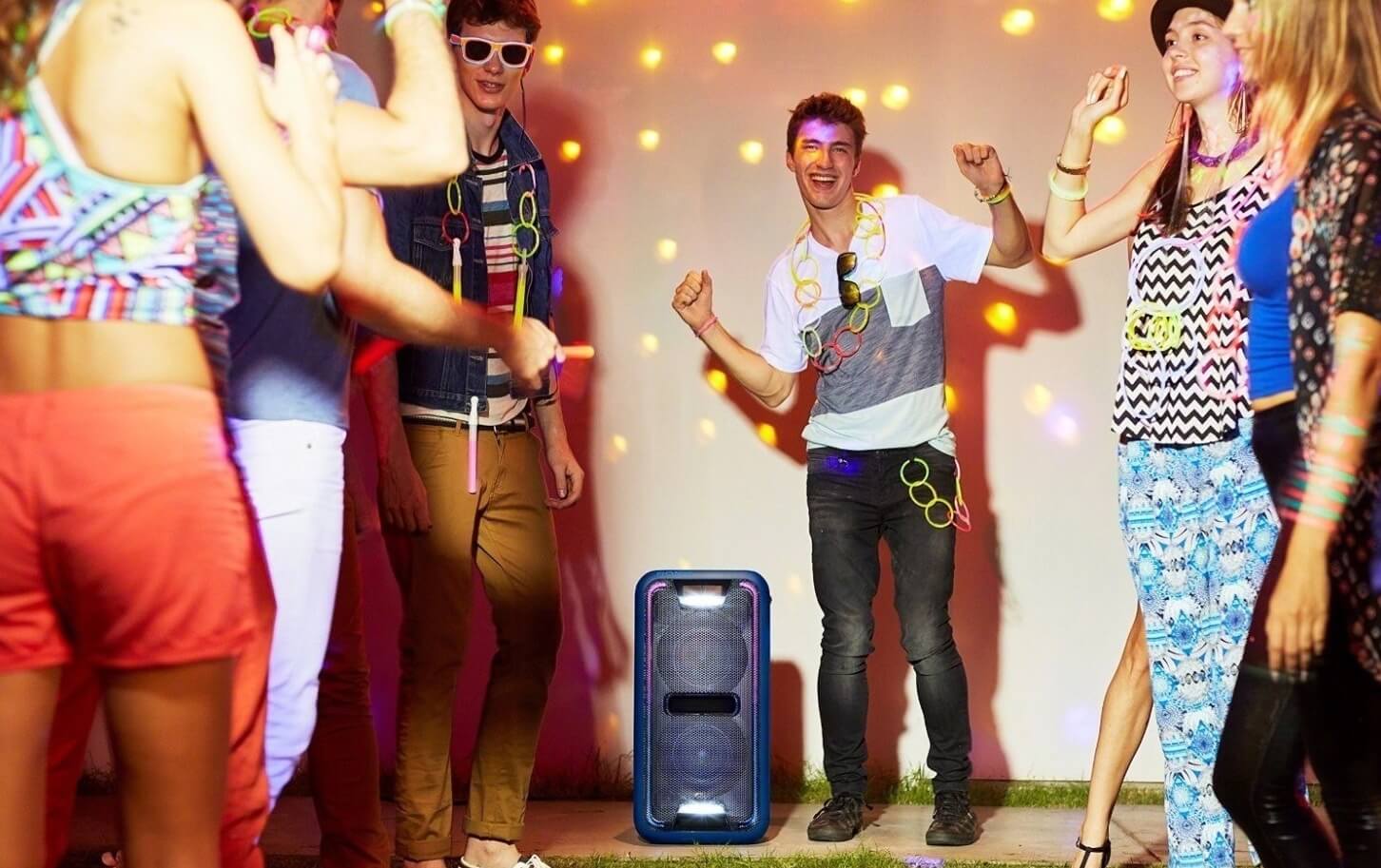 This is an excellent solution for home and country parties. The DJ is not needed, but the music is answered by the one who first connected his smartphone to the device. Sony GTK-XB7 is powered from the network, and a Bluetooth / NFC module * is required to connect external devices – sound sources. In general, on paper, all this looks pretty cool. Let’s check what the column is in real life.

In the bundle with the column, only a power cable is supplied, a compact remote control, which for some reason does not combine with the device itself in color, as well as the batteries for it.

How does it look?

The design of the Sony GTK-XB7 case can be called restrained. One of the main design features of the device is the backlight, which can synchronize with the tracks. So with proper imagination and suitable environment, any apartment will look like a nightclub with spectacular illuminations. The main thing is to immediately agree who is responsible for the music, and who is behind the counter in the improvised bar in the kitchen. 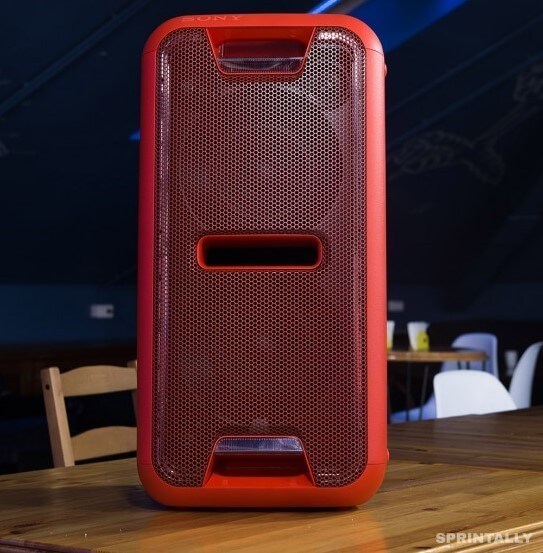 The backlight is visible from all sides, it is impossible not to notice it. In addition to the diode tape that surrounds the speakers under the protective grid, there are two stroboscopes and small light sources on the speakers themselves. In daylight, the backlight is not so bright, but at night the room is literally filled with flickering lights. 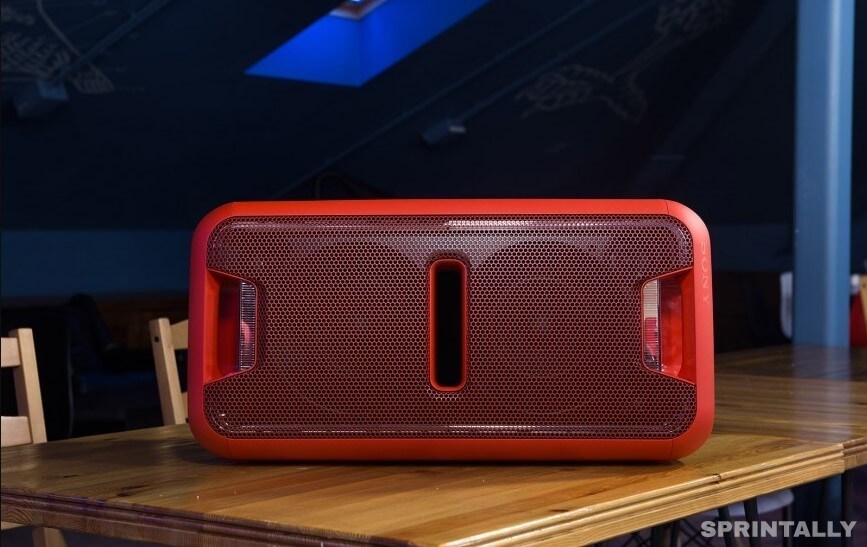 The weight of the column is 12 kg. It is difficult to carry her from one room to another, probably to everyone, but to carry such a load with you even if you have a car will be difficult. Thanks that there are convenient handles from above and from below, which allow to easily move the audio system.

You can arrange the column either vertically (conveniently if it is on the floor) or horizontally (for example, on a table). On sound quality, this does not affect in any way, since there is a sensor in the column that determines its position and adjusts the sound accordingly.

And, of course, it’s worth adding that in addition to the bright red color that you see in the photos, the column is available in classic black and dark blue performance. But, in my opinion, the color of the case does not matter, since in the colloquial mode you do not pay any attention to it because of the bright illumination.

How is it managed?

The control scheme is extremely simple, even a child will understand. All buttons are located on the upper end: on the right – two round buttons for volume adjustment; on the left – a key for turning on and connecting wirelessly to another speaker, as well as a dedicated button Extra Bass *, which enhances low frequencies. 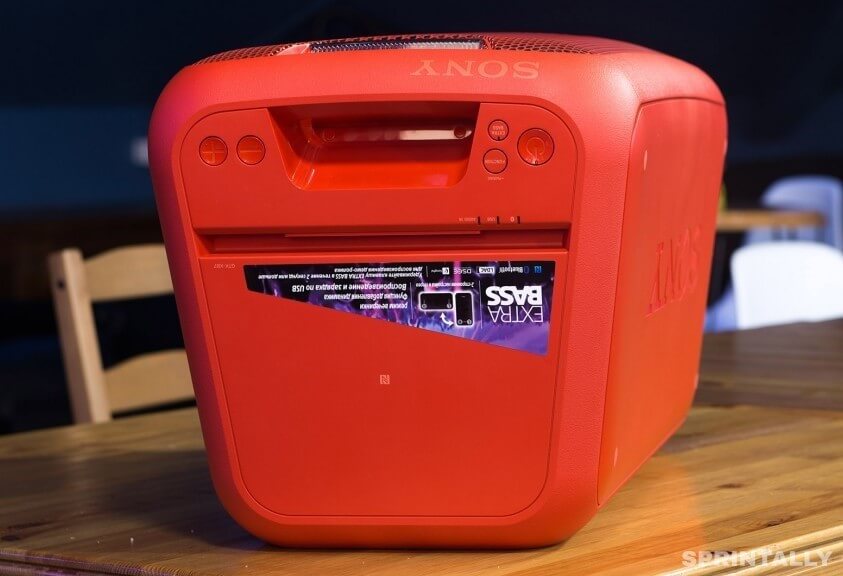 There, for clarity, there are three LEDs that show the source of playback: via USB, Bluetooth or analog “tulips”. Well, here, next door is the NFC * module, which greatly facilitates and accelerates the replacement of playback sources. Any party member can in seconds connect his smartphone and blow up the dance floor with some bright dubstep remix.

At the back are the analog input, output, USB and power connector. This set of interfaces allows you to connect the column to the TV, listen to music from a flash drive, smartphone and any other device. You can, of course, complain about the lack of the usual AUX, but still, it’s a trend – the connector is gradually disappearing into the past. 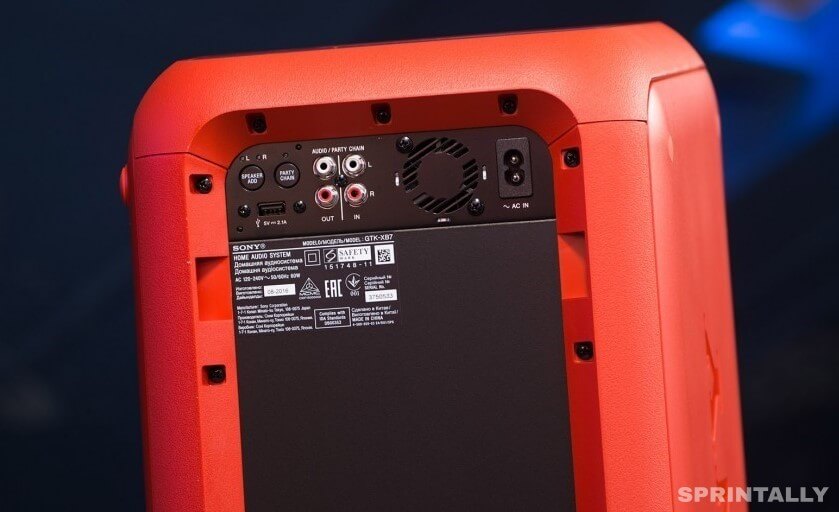 And why superfluous wires when Sony GTK-XB7 perfectly reproduces records on Bluetooth? Almost all mobile devices support this standard. In extreme cases, there is USB. Through it, by the way, you can charge any gadget, smartphone, tablet or even a camera. And if one audio system is not enough, you can easily add a second, third – yes, as much as you want, in principle. In this case, the first system becomes the main one, and the rest receive a signal from it.

The functionality of the system can be estimated as basic, but there is a free application SongPal * for Android ™  and iOS ™. After installing the program, you can manually change the lighting of the column, create your playlists for playback, move the sliders of the equalizer and even add DJ effects. SongPal * completely unties hands: there is no need to approach Sony GTK-XB7 at all to change the settings. Moreover, there are no hardware buttons for equalizer adjustment on the column. The range of options, by the way, is more than sufficient for ordinary listeners. Instead of a smartphone for remote control of acoustics, you can use the remote that comes with the kit.

How does it sound?

Sony GTK-XB7 is suitable for large rooms with a crowd of people – yet the power here is prohibitive, as much as 470 watts. The maximum volume level is such that in a medium-sized room it is impossible to take it out. To the sound of no complaints, especially if you listen to genres with an abundance of bass – then the button Extra Bass * will be very useful. When it is pressed, the low-frequency sound is amplified, while the music remains clean, no distortion or unnatural shades appear.

Club music in the style of “tuz-bats-boom”, metal and heavy rock, jazz, classics – it seems that there is no genre in which Sony GTK-XB7 will feel uncomfortable. And although this is not the highest segment, the overwhelming majority of listeners will definitely be satisfied with the performance of the system.

Sony has taken into account the features of the work on Bluetooth – it is logical to assume that this way of audio playback will be used more often than others. On smartphones and tablets, usually recorded compressed formats, whether MP3 or AAC, used in iTunes. The speaker can improve the sound quality of such files. Nuances of sound that are lost when compressed, the system returns – well, as far as it’s possible. Now it is difficult to find a person who buys music on CD, and not in digital services, so the direct comparison could not be done. But we do not have any questions to play compressed formats.

What in the end?

During the testing, I was not able to detect obvious flaws in the Sony GTK-XB7. The audio system confidently holds the signal through Bluetooth, beautifully changes colors to the beat of the music, reproduces the deep bass and sounds juicy. At maximum volume, the sound is distorted, and not every acoustics boasts of this result.

But, of course, this is not a device that can be recommended to everyone without exception. Still, the genre of the audio system for parties is very specific, so it’s worth taking it only if you have many party-goers friends, and parents leave the country house every weekend.