Blessing the competition in any of its manifestations! It’s been only six months since AMD ceased to produce “computing furnaces for the poor” and created RyZEN, and Intel has already abruptly stopped idling and for the first time in six years began to try to make processors in desktop PCs faster. But the computer enthusiast is not the only one living with desktops, and gaming laptops based on the “red camp” components appeared. How does all this iron good work in the 17-inch case, and how profitable are the gaming laptops with RyZEN and Radeon in return for Intel Core and GeForce?

Contents of the Article show
What is RyZEN? Which Strix? What are all these computer hardware?
Large, but at least “the bone is not wide”
A good screen and a “cowering” processor
Catch up, but not overtaken

What is RyZEN? Which Strix? What are all these computer hardware?

ROG Strix GL702ZC – the model is special. After all, the world’s first gaming laptop based on AMD RyZEN processors. For such a step of ASUS company every honor and respect – after the deepest crisis, when the coolest AMD processor barely jumped to the level of Intel Core i3 and prevented to work with powerful video cards in full force, almost all the allies left the “reds”.

First, said goodbye to MSI, which until 2014 released models with the flagship “AMDs” hardware for the price of mid-range notebooks with Intel-NVIDIA. A little later, Dell capitulated, which abandoned the low-power AMD processors, but gladly used the graphics Radeon in hefty 17 and 18-inch Alienware. 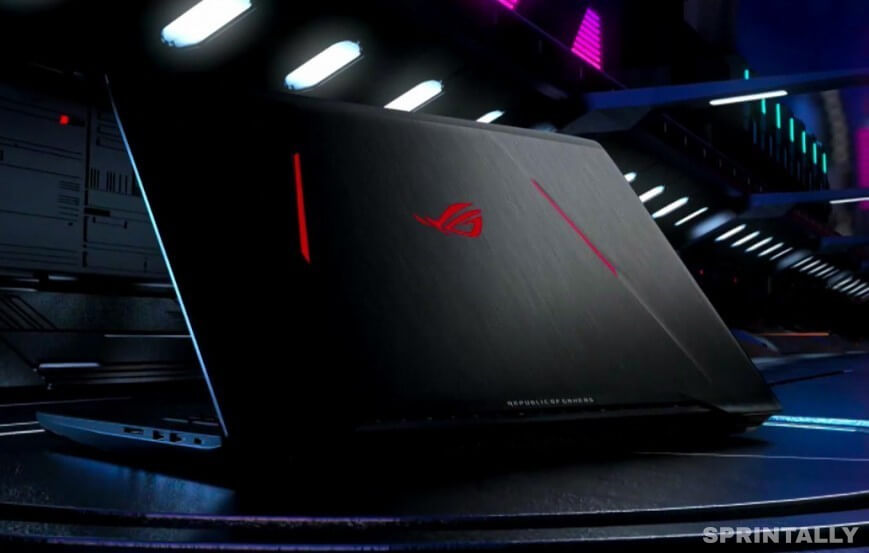 In modern times, Lenovo was turned over to the half-forgotten producer of computer hardware – for the first Y-series gaming computers, the Chinese were looking for the cheapest components and the pliant CPU / GPU manufacturer. With the almost monopolists Intel and NVIDIA, which automatically “pocket” the money of laptop manufacturers, it was more difficult to agree. Therefore, in 2016, the light saw the Lenovo Y700 with the flagship AMD Carrizo processor and not the flagship, and such, “to draw,” the average price of the Radeon R9 M385X (something between the GeForce GTX 950M and 960M). In general, we wanted it better, but it turned out as always – the processor raised its “paws up” in any games where it had a serious load, and the laptop started to “hiccup”. 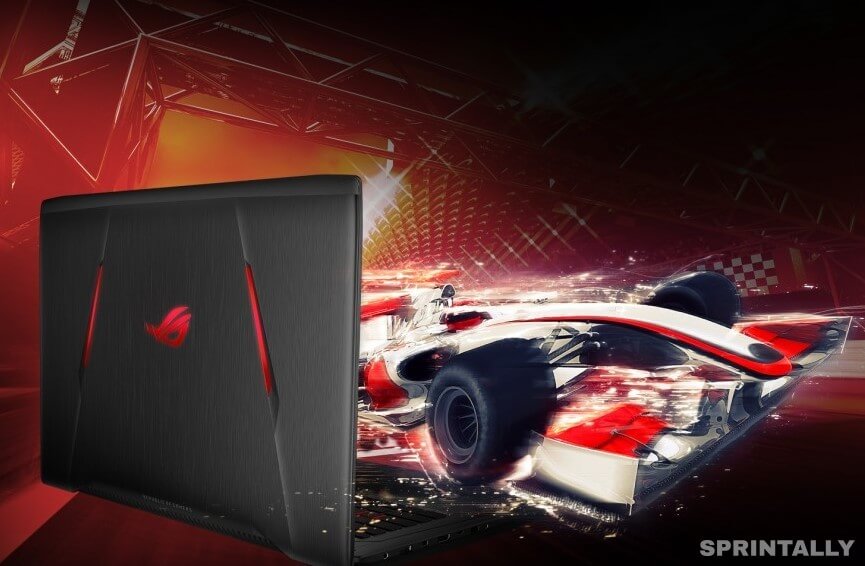 But with the release of really new AMD RyZEN processors in desktop computers, the situation changed dramatically – the eight-core RyZEN 7 1700, performed on an equal footing with the best “civilian” quad-core Intel Core i7, and outperformed the Intel processors in working non-gaming tasks. A video card Radeon RX 580 sensation, of course, did not create, but in terms of performance, it’s an analog of the GeForce GTX 1060, which in games “takes fire on itself” and less stresses the processor – in laptops where shaking cores in a thin case is not very comfortable , it goes to the video accelerator only in plus. However, the greed with 4 GB of video memory versus 8 GB in the desktop RX 580 and 6 GB of competing for 1060 is not encouraging. 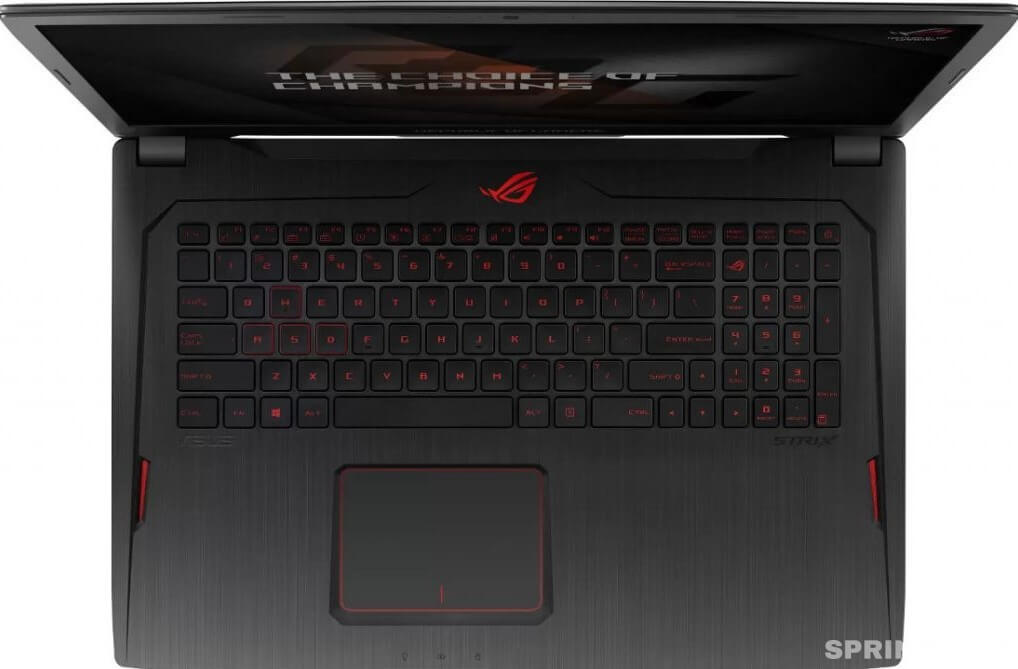 I hope, now you understand what power the laptop is talking about. But all this is theoretical calculations for the “ideal world”, and we are interested in what laptop was wrapped over the AMD components, and whether it is really cool for all 1,494-1,793 USD, which will be asked for in shops. There will be a cheaper modification with RyZEN 5, but we do not need such hockey. Because the “five” is not competitive.

Large, but at least “the bone is not wide”

Just a couple of years ago, a typical 17-inch ASUS laptop looked greedy with a brand-new body made of matte plastic, a metal ” snag ” on the lid and an “exhaust system” in the McLaren style . Today, this “aerodynamics” on a computer with the proportions of a tractor looks ridiculous, but in 2014-2015. the design of gaming Asusov seemed almost businesslike in comparison with MSI, which, it seems, was painted by young gypsies. 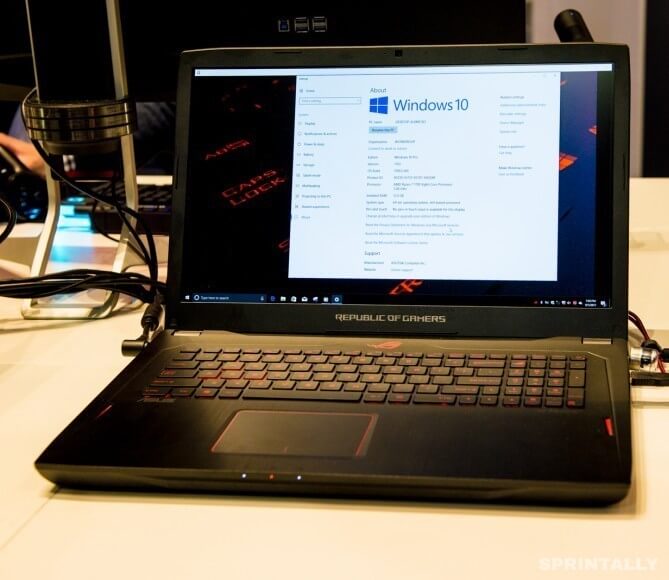 If ASUS were an arrogant middle-aged lady or Apple, he would have had the phrase “not you, scum, talk about my beauty” to multiply the same design over the years. But ROG laptops are not your iPhone, with them the argument “big frames and cumbersome cases – it’s cool!” Does not work. Therefore, new gaming models ASUS began to ” lose weight “, and now the gamer’s 17-inch notebook with ultra-“hot” components looks like an unburdened 17-inch model.

Correct “building” of the working surface, without the islands of special keys that floated beyond the basic row of arrows and the “elephant” touchpad, as it was before. A lot of good metal – and on the working surface, around the keyboard, and on the lid. Although it’s still not a super-hard laptop, it’s better to bend under you than ASUS will spend extra money on more solid case materials. 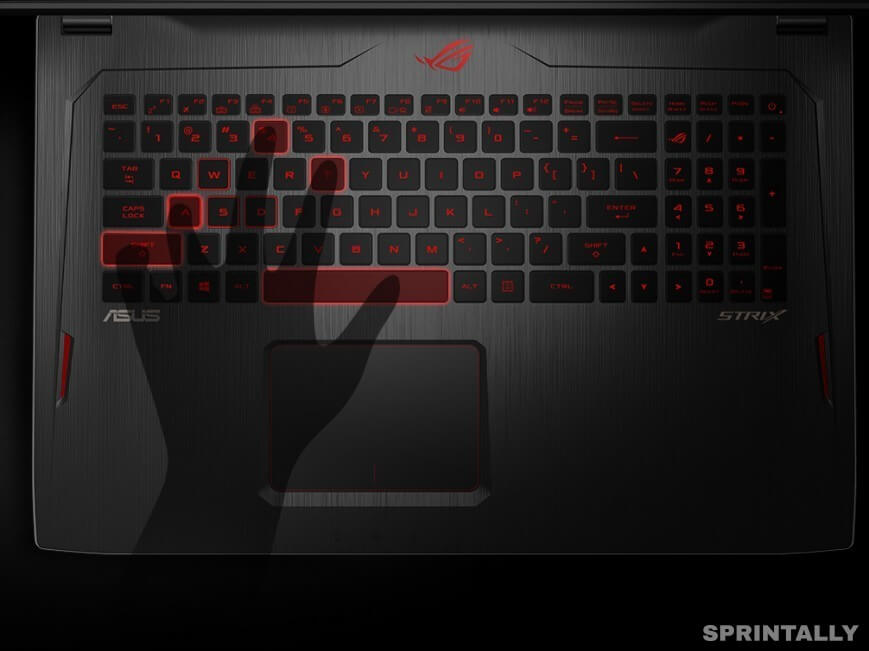 It weighs three kilograms at a thickness of well over 30 mm – on the one hand, it’s the dimensions of more powerful notebooks (with the GTX 1070 on board), on the other – the “nature error” called ASUS X751SV weighs 2.8 kg, although inside is not even nothing gluttonous and hot, the laptop works on the basis of the Tablet Intel Pentium and the “plug” GeForce 920MX. In short, the normal Strix GL702ZC dimensions.

The keyboard is densely packed, but everything is in place, the size of the touchpad is also enough – before we are not an ultrabook bedside, to which the mouse does not feel comfortable. The connectors on the sides are as much as necessary, although fans of the MacBook Pro with trimmed ports can “witty” notice that the USB-C is only one and it’s not enough. 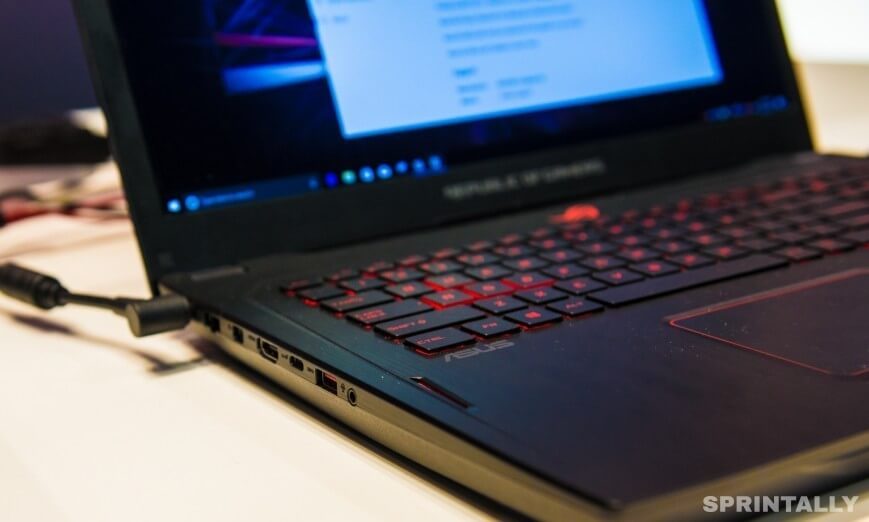 A good screen and a “cowering” processor

It’s better to be rich and healthy than the poor and sick, so I’m also in every way for 4K-displays in 17-inch laptops and would be glad if the “hardware” in mobile computers is the most 4K “pulled”. But does not pull. So let’s not be like schoolchildren whose camera quality is measured in megapixels, and the quality of the screen is in the number of dots, and pay attention to the classy, very bright (370 cd / m2, if you believe colleagues abroad) IP-matrix LG-Philips LP173WF4 -SPF5 with correct color rendering. The same display, by the way, is installed in “licked” all bloggers Lenovo Legion Y920 or brand new Acer Predator 17 X. Sin complain. 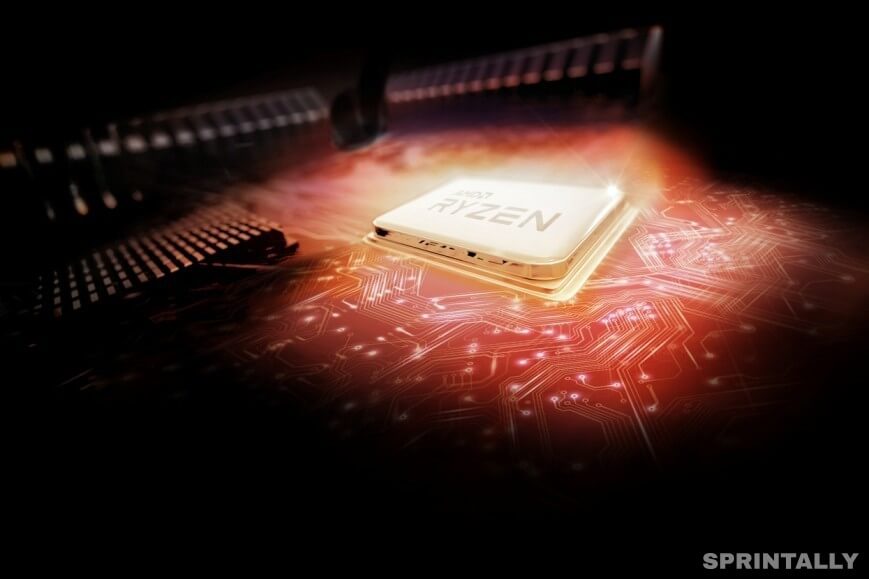 And what processor! This is a bomb! In the good sense of the word – in benchmarks, processing photos or video, in tasks that load the computer under the ceiling, RyZEN 7 1700 is faster by 70-80% than the coolest notebook Intel Core i7 7820HQ now! Yes, this speed is not given without sacrifices – the AMD processor is 40% hotter than Intel, but this speed in “photoshop” will not give you any more laptops. The cooling system goes to the maximum speed and works with the loudness of the “Zhiguli” engine in front of you. But no overheating and eight powerful cores in the “just a laptop”! By and large, we have the first laptop with an eight-core laptop processor – all the other hand-made articles in the history of mobile PCs, or they scooped up processors in tablets, as did the Chromebooks or manufacturers installed processors for desktop computers in the notebook (all kinds of Clevo, Eurocom, Sager, etc.). 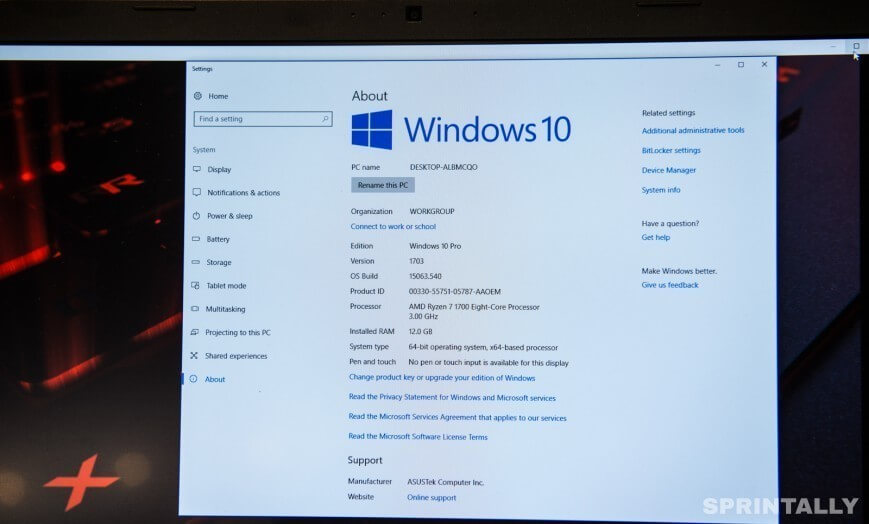 Romance evaporates in games, because the RX 580 is not enough, which in itself is slightly inferior to the similar in class GTX 1060 in some games, so it also rests on 4 GB of video memory in some cases. And the eight-core processor gives a win only in games that are able to “eat” (involve) all 8 cores. In the case when the game takes 4 cores for its needs, each of the RyZEN cores is slightly, but weaker than the same core as the Intel Core i7.

In any case, almost all the games you will “fly” even on ultra-detailed graphics (Full HD the same!). It is very rare to lower the detail to “very high”.

The sound in AMD’s Strix is good and loud – “re-routing” the dynamics in games will do, and even movies with 2 speakers and a subwoofer look nice. But with autonomy, everything is bad – from 1 to 1.5 hours, regardless of whether you read the text or travel on the Internet. At the maximum brightness of the display in games, the laptop will not last an hour. Yes, you do not want to play like that – without connecting to a socket, the processor and video card do not work at full capacity, and the laptop is not very gaming. 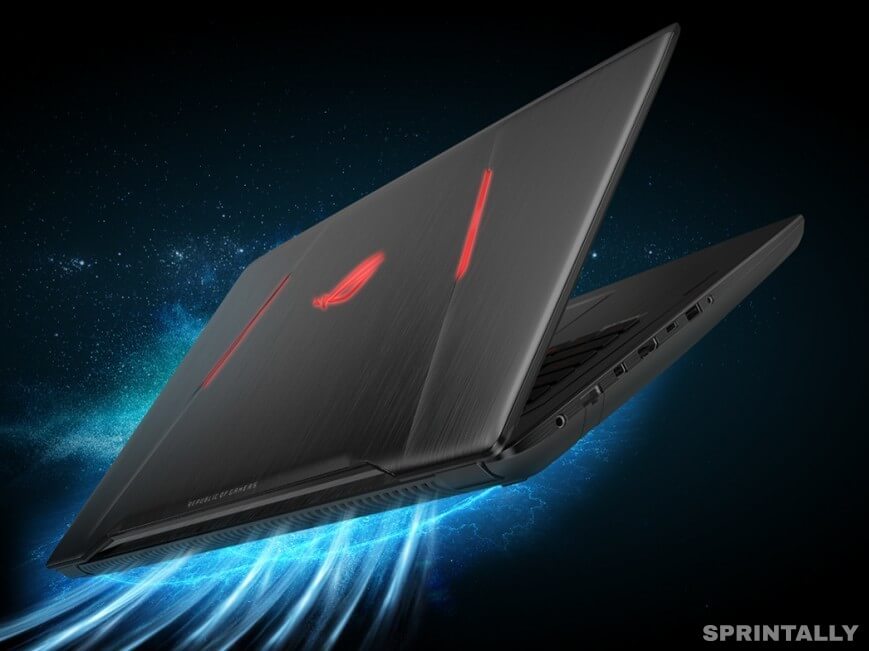 Catch up, but not overtaken

You can not imagine how through the “fifth point” all laptops with AMD hardware on board in the old years worked. And here I am, and therefore I sincerely rejoice that ASUS released the first balanced laptop – a laptop in which the processor’s power does not limit the card’s power, and all the “feed” still has to “go to the horse,” because the cooling system performs its work perfectly. In addition, at the moment this Strix is a cool laptop for both “racing” and for work. So fast that it makes no sense to indulge in an extreme desktop computer to such a mobile computer in addition.

Only this leadership is very fleeting – as the leadership of diapers according to the association of pediatricians (created in order to advertise diapers). In games, the GL702ZC works like a laptop costing 80-90 thousand. But our hero will cost 120 thousand minimum, and this is here and now. 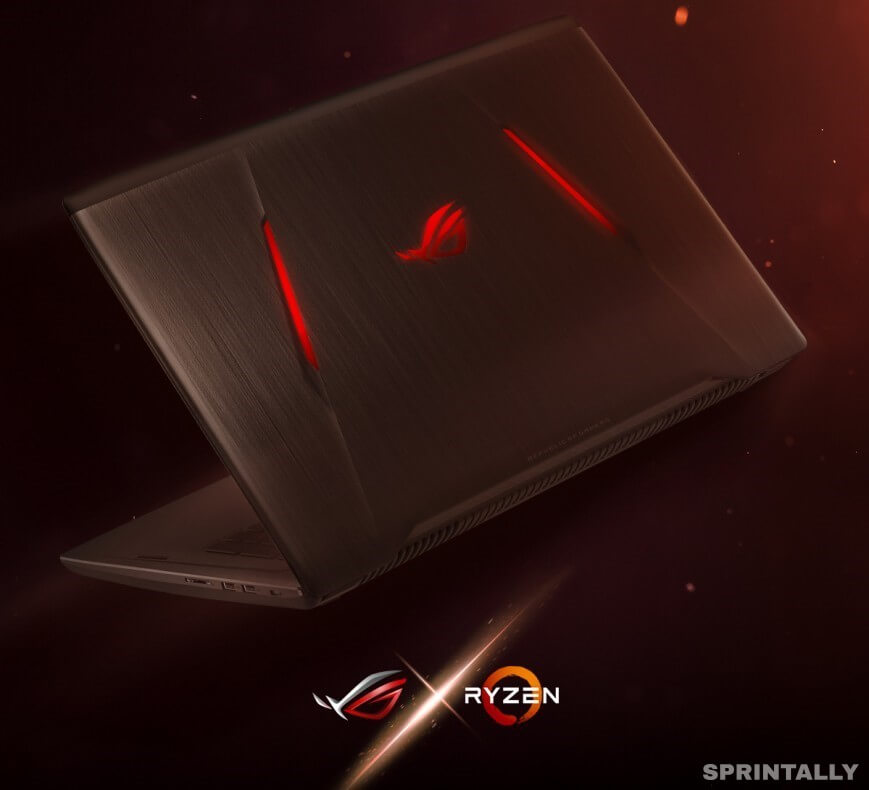 Furthermore, The other day Intel will roll out a new generation of Intel Core, in which the lord of processors lazily get out of the bins of the development, which he took in case AMD overtakes the current processors for performance. These will be six-core processors based on the Coffee Lake microarchitecture, but these six cores will heat up less, consume less energy and work just as well, or slightly faster than RyZEN. From now on, the success of AMDDB depends only on whether the “red” price war will withstand their big and thick competitor. In any case, buyers will benefit – worse than it was during the monopoly of Intel Core Sandy Bridge / Ivy Bridge / Haswell / Broadwell / Skylake, 6 years old, will not be anymore. Will be better.