10 monsters that were discovered in the depths of the...

Oceanic monsters: It’s hard not to agree that nature is a brilliant artist. It is he /she who creates works that then inspire poets, musicians, and artists. But it is not always nature to “work” on creating beauty.

When you look at some animals, for example, you can’t help but shudder at their appearance and the realization that you live on the same planet. Most of the monsters that nature has created can be found in the depths of the ocean, and they can truly frighten even the most fearless person. 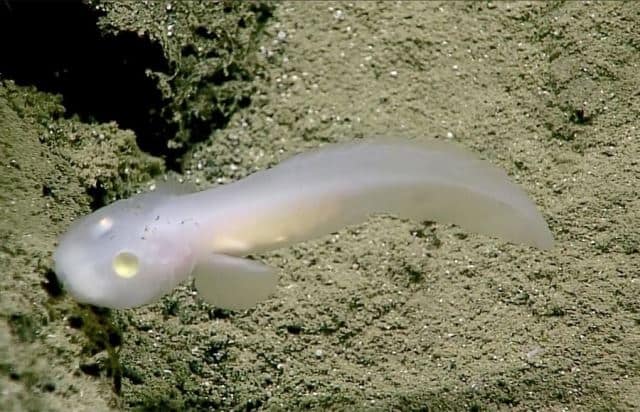 The uniqueness of the ghost fish lies in the structure of its eyes. Outwardly, they look more like large orange balls. Next to them are smaller balls. And this is the second pair of eyes. This feature is due to the need for the animal to be constantly alert.

Round eyes allow it to get an all-round view and avoid falling prey to larger predators. Because the fish’s eyes are divided into two parts, this allows the animal to look back and forth at the same time. While the black eyes are focused on finding prey and hunting, the large orange eyes are careful not to fall prey to another predator. At the same time, the ghost fish’s body is completely transparent. 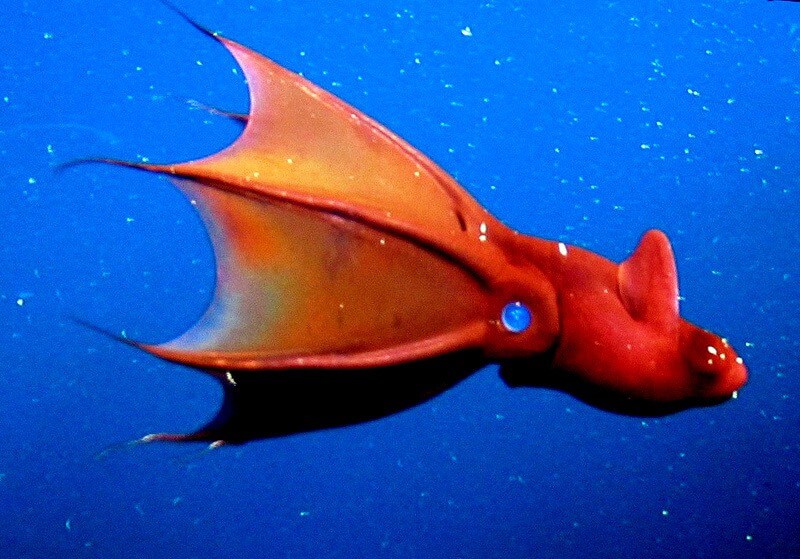 The vampire squid is a truly unique creature. It has blue blood in its veins. And it lives at depths of up to 1,000 meters, where the oxygen level is so minimal that most of the animals simply died. The vampire squid is a small animal that does not exceed 15 cm in length. But some researchers claim that the squid can grow up to 30 cm. The body of the animal is similar in consistency to jellyfish.

Depending on the lighting, the body’s hue may change and turn black, purple, brown, or reddish. The animal’s eyes are bulbous, and also change their hue depending on the light. The squid has 8 tentacles, which are connected by membranes. On the reverse side of the membranes are small antennae and needles. There are suckers at the ends of the tentacles. 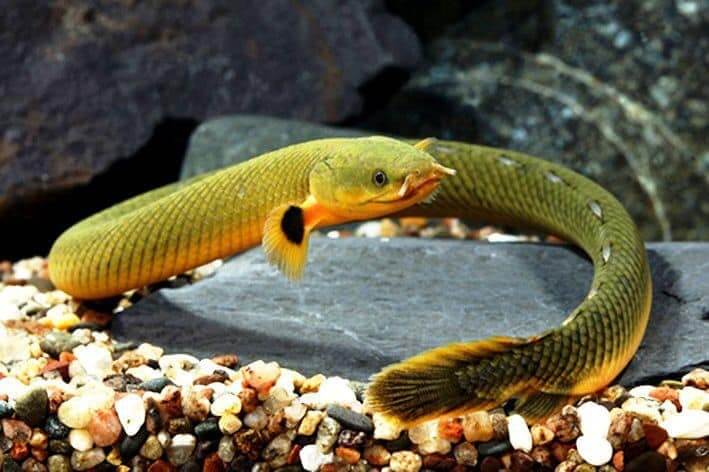 During the day, the Reedfish prefers to hide in the depths of the waters and keep a low profile. But at nightfall, the creature moves to shallower areas. There, it often gets caught in the nets of fishermen. In captivity, the Reedfish does not live long, but thanks to this, scientists were able to study it in more detail. All over the body of the fish, there are glow organs that help it hunt.

The massive jaw allows it to hold its prey firmly. Closing the jaw, the victim enters the esophagus, where several curved spines are located. With their help, the prey is pushed into the stomach. It is a sac-like cavity. Reedfish can even hunt large prey. Thanks to this, the fish do not hunt for several days. 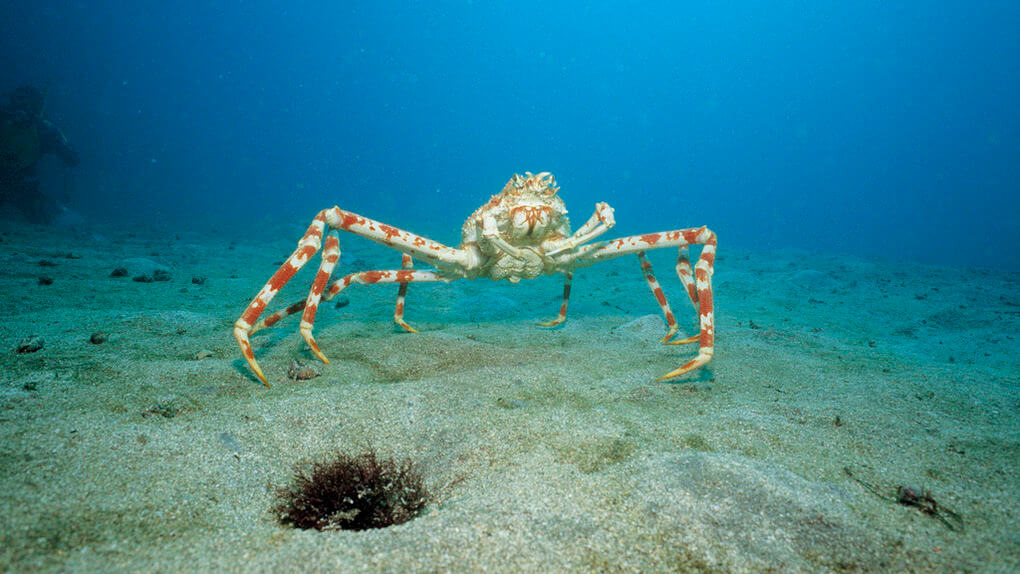 The Japanese spider crab is the largest living arthropod on earth. Its body, together with its pincers, reaches a length of up to 4 m. More precisely, the body of the crab itself is small, the main part of the length falls on the claws. To imagine a spider crab, remember what spiders with long, thin limbs look like.

In appearance, these two creatures are very similar. From this, the crab got its name. The meat of young giant crabs, which have not yet begun to reproduce, is even consumed as food. But sexually mature individuals are not suitable for cooking delicacies. Their meat is tough and bitter in taste since crabs prefer to eat carrion. 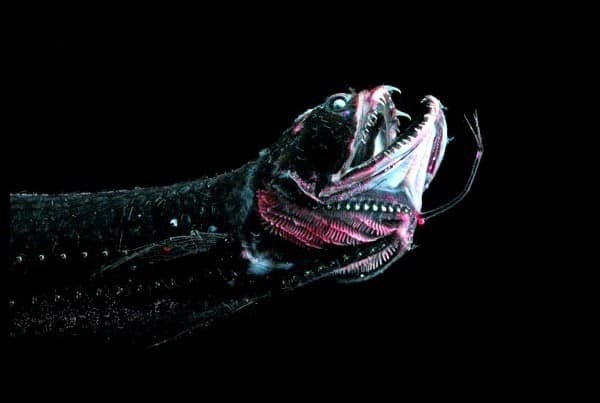 At a depth of 2 km, there is a unique fish that can shock even the most persistent person just by its appearance. If you look at the creature of the deep waters of the ocean, it may seem that instead of scales, the fish is dressed in black latex. In addition, it has huge sharp fangs, with which it deals with victims.

Like most deep-sea fish, the black dragonfish has learned to produce a glow using bioluminescence. This glow is necessary for the black dragonfish to attract prey. Dragons are aggressive predators, despite their size. In length, the body of the fish reaches 16-20 cm. The maximum length that was recorded was 60 cm. 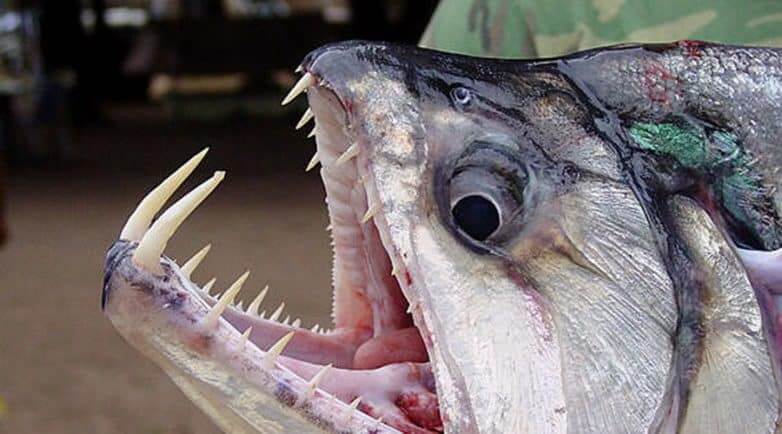 The fanged fish lives at a depth of more than 5,000 meters. The pressure in such depths could flatten a person. But for fanged fish, these are ideal living conditions. The creature’s body is very flat. A distinctive feature is a large head and a massive jaw, inside which there are huge long fangs, with the help of which the prey of this monster has no chance of survival. Among fish, this species has the largest teeth relative to its own body. 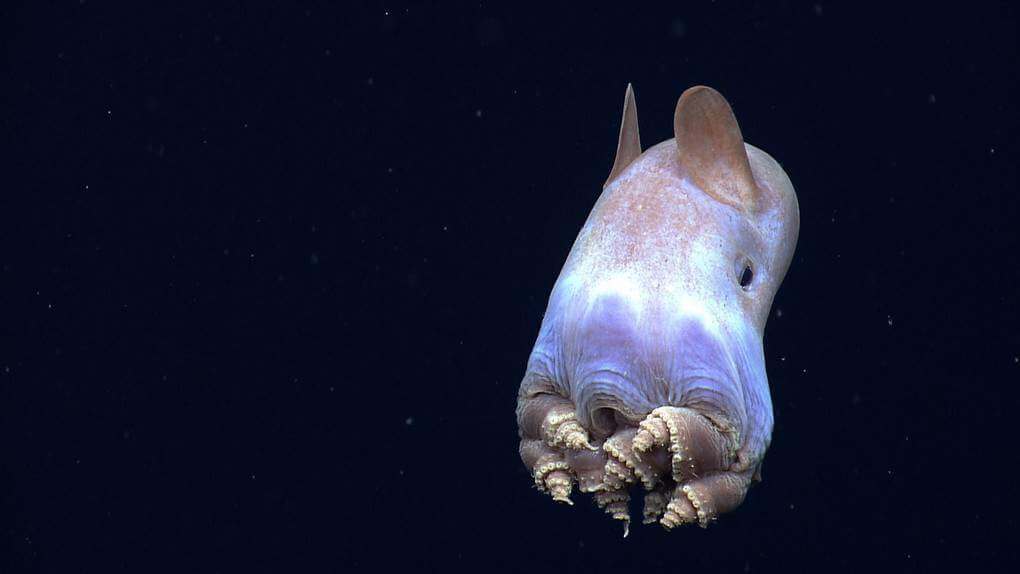 Grimpoteutis or Dumbo octopus lives in the ocean, at a depth of 100-7, 000 meters. This species looks unusual compared to the usual representation of octopuses. On its head, some outgrowths resemble ears in appearance. But they’re actually fins.

In length, adults reach 20 cm. Grimpoteutis feeds mainly on small crustaceans and bivalves. In the case of Food, the octopus prefers to swallow whole. You can distinguish a female from a male by the size and patterns on the body. 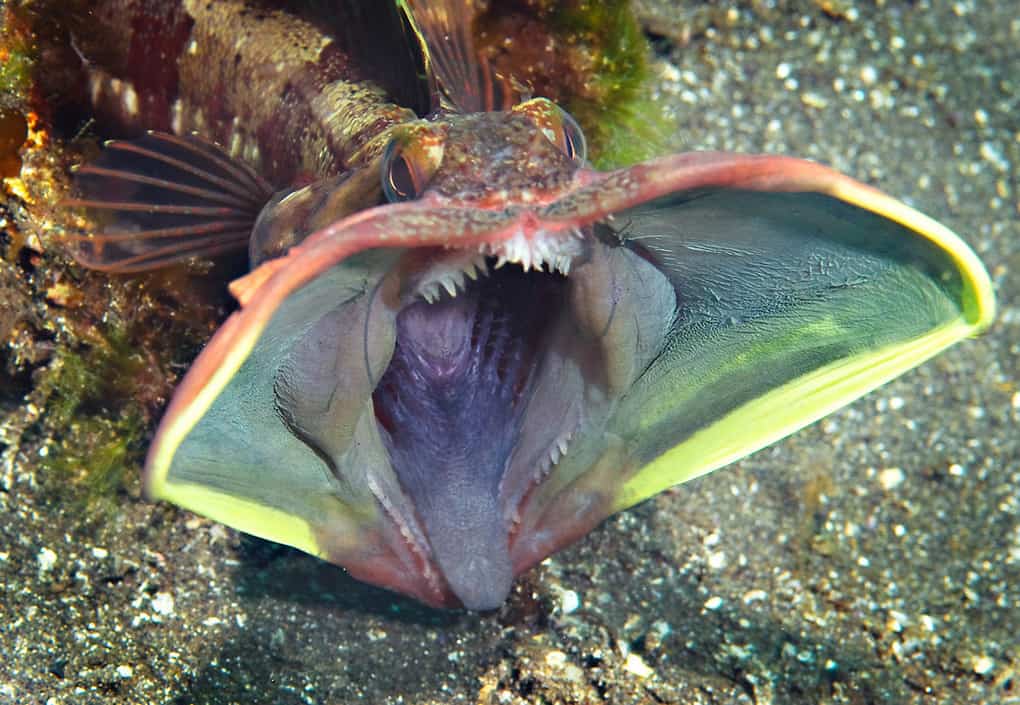 The habitat of the Sarcastic fringehead is subtropical seas. A distinctive feature of the fish is a largemouth, which is a sign of the superiority of one individual over another. During a fight between two males, both open their mouths wide and suck on each other. It looks like a kiss from the outside, but in reality, this is how males fight.

The Sarcastic fringehead is a very aggressive fish and sometimes attacks even divers. When intruders invade their territory, fish protect it with all their might, but in most cases they prefer to stay in the shelter, sticking out only their heads. The body of the Sarcastic fringehead is smooth without any traces of scales and flat, which makes the creature look like eels. 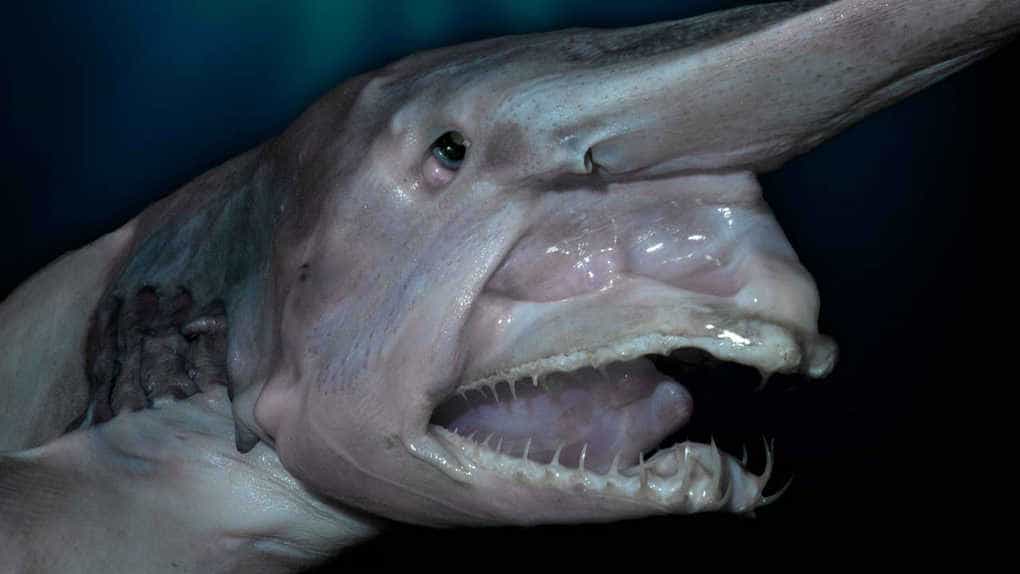 Sharks in principle can hardly be called cute creatures, but the goblin shark breaks all records among its fellows. Evolution functions in such a way as to help animals adapt to their environment. And such changes are not always beautiful. A characteristic feature of the goblin shark is its long nose, which is located above a wide jaw with sharp teeth.

Moreover, the fish’s jaw is very powerful and if the shark has caught prey, then the victim will not go anywhere from it. Fish live in the depths of the ocean, where sunlight does not penetrate. In this regard, the goblin shark has very small, narrow eyes. 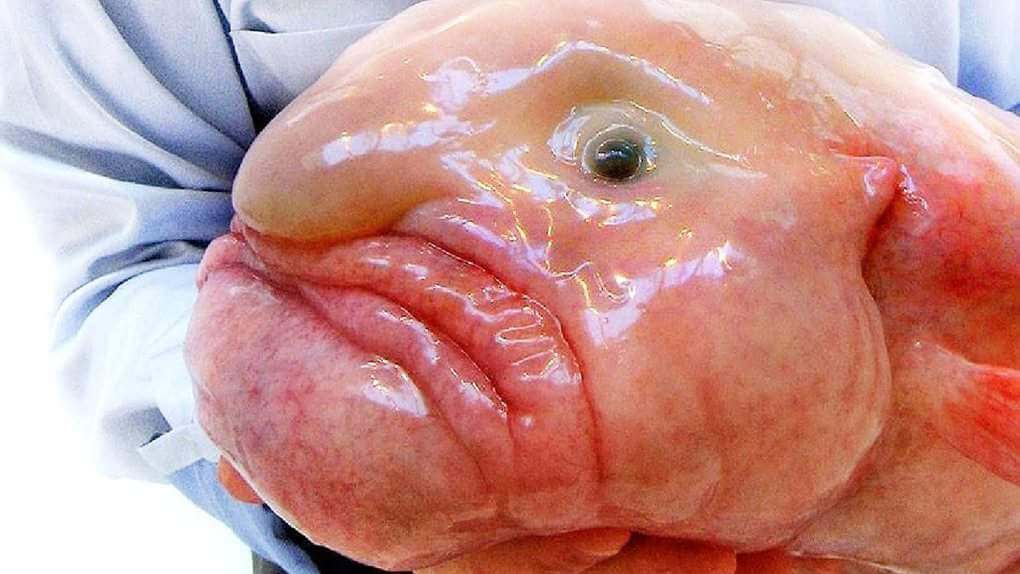 One of the strangest creatures on the planet is the Drop fish. This fish lives in the depths of the ocean, very often fishermen catch it completely by accident. The appearance of the fish resembles a shapeless mass with a very sad face. This appearance made the Drop fish the star of many memes.

This is not to say that the creation looks scary, rather, just unusual in comparison with the traditional attachment of fish. Although Drop fish is not considered edible, some exotic restaurants offer their guests a taste of it.