Top 10 smallest spiders in the world

Smallest spiders: Spiders are not the most desirable guests in the house. Everywhere they try to get rid of them, using improvised methods: slippers, for example, or chemicals. But once you take a closer look at these creatures, the desire to get rid of them is replaced by another – to release them.

Indeed, think, at the next meeting with a spider, why do not you, instead of killing them, release the representative of the arachnids carefully through the window or staircase? This requires only 2 items: a glass and a lid. You put the spider in a glass, put a lid on it, and then release it.

Did you know that you cannot kill spiders? Many legends are associated with 8-legged creatures. Among the ancient peoples, the spider in the center of the web was a symbol of the sun, from which the rays emanate.

And there is also a sign according to which a small spider (by the way, our article is about them) – for money, albeit small, and a large one – for solid amounts. As ordinary people say – the omen works, so first think about how to run for a sneaker.

In this article, we want to tell you about the smallest spiders in the world, look at their photos 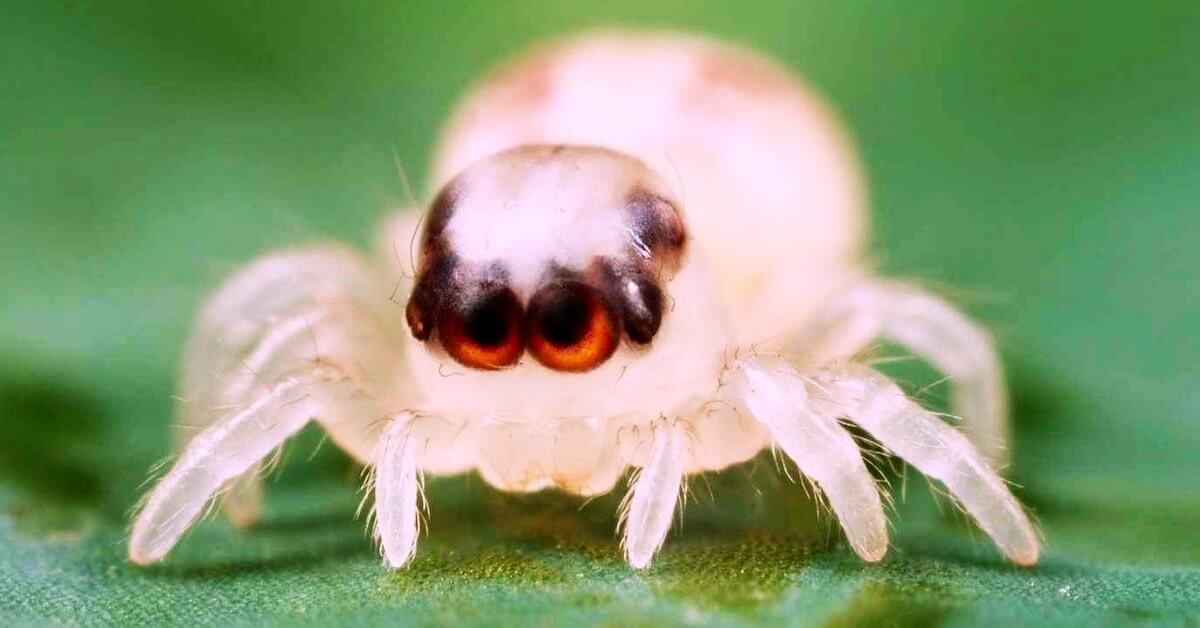 Patu digua is the smallest spider among all. Scientists have found that the size of the male is only 0.43 mm. – without a magnifying glass we can’t see them. The spider belongs to the family of symphytognathidae. Distributed in West Africa on the Ivory Coast. 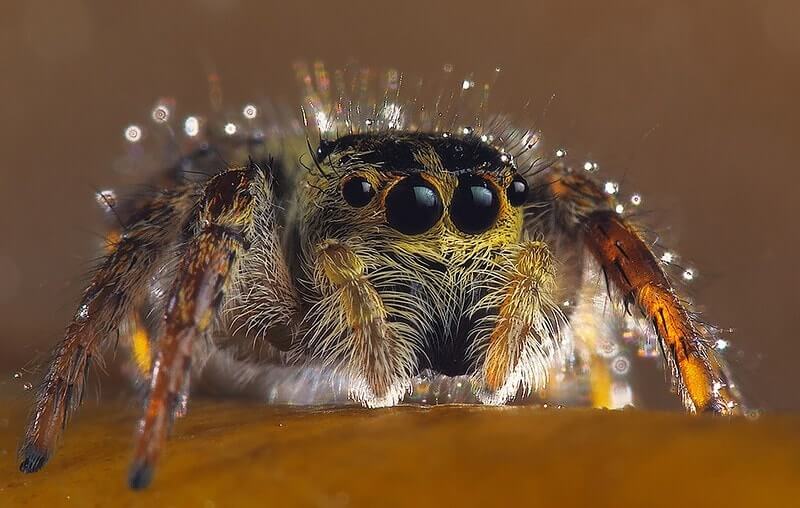 The Himalayan spider is tiny in size – the male does not exceed 5 mm, and the female grows up to 6 mm. For the first time, this unusual tiny spider was found on Everest, so that the representative of the arachnids can be attributed to the highest of all spiders on our planet.

If you pay attention to the name, it becomes clear that it was created for a reason, but means “living above everyone else.” The Himalayan spider was first discovered in 1922, but this species was qualified in the scientific world only 2 years later – in 1924. 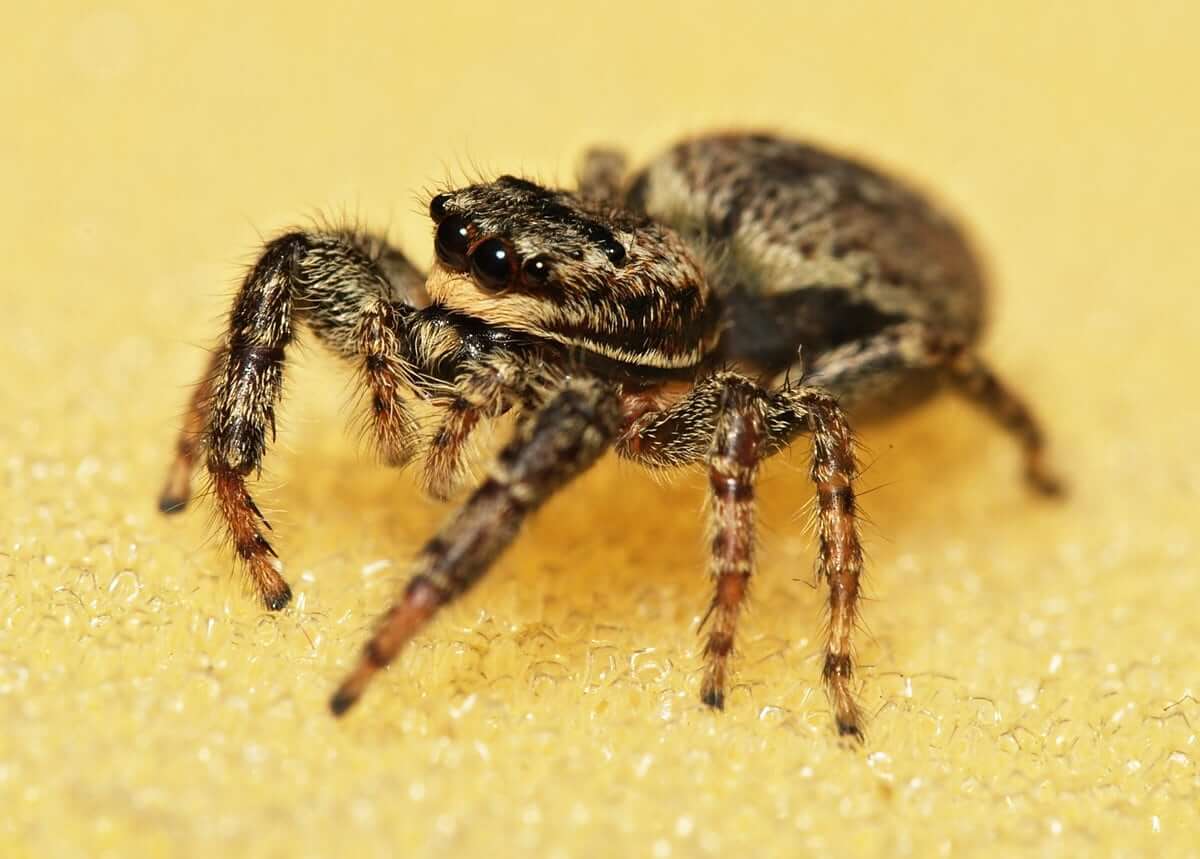 This type of spider can be called the most charismatic. Distributed in the Palaearctic. Marpissa muscosa in length reaches 8 mm, the color varies from gray to brownish. The spider got such an interesting name due to its appearance because its entire body is covered with hair, which is very similar to moss.

Spiders of this species prefer to settle in nests that they create in dead trees. The Marpissa muscosa inhabits North Africa, Europe, and the Asian part of Russia. 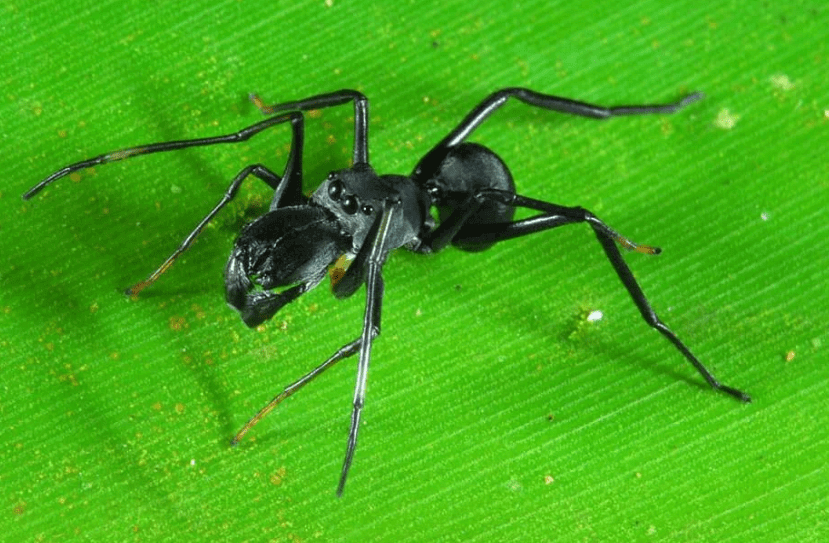 The Ant Spider Horse is called a miracle of nature, outwardly it looks like an ant. Its dimensions do not exceed 12 mm. Among other representatives of the arthropod species, he stands out for his jumping ability and is the owner of excellent vision. Many researchers even believe that the ant spider is endowed with intelligence.

Spiders of this species are representatives of fauna and flora, they are found absolutely everywhere. Once, in 1975, one of the subspecies was discovered at the top of Everest – at an altitude of more than 6500 m above sea level. There is a version that ancient ant spiders first appeared in Gondwana, and subsequently spread throughout the Earth. 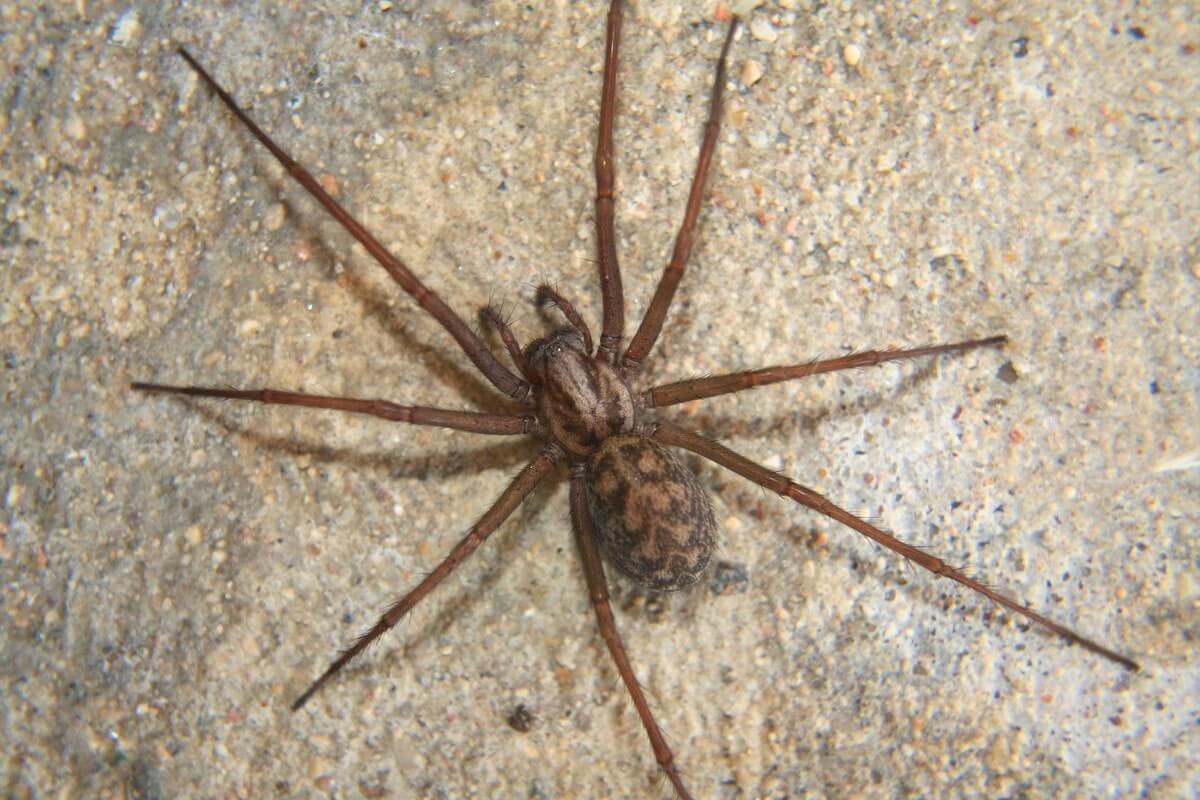 The Tegenaria domestica or house spider belongs to the funnel spider family. Of all the species, it is the most common – it lives everywhere in the wild, and also prefers to settle in human dwellings, especially they like attics. By the way, they manage to get into the apartment very easily – in warm weather, they do it through open windows.

For a person, a house spider up to 12 mm in size does not pose a danger but attacks only if it feels that something is threatening it.

An interesting fact: the house spider perfectly senses changes in atmospheric pressure. If it rains, they crawls deeper into the hole, and sits there, not sticking out. 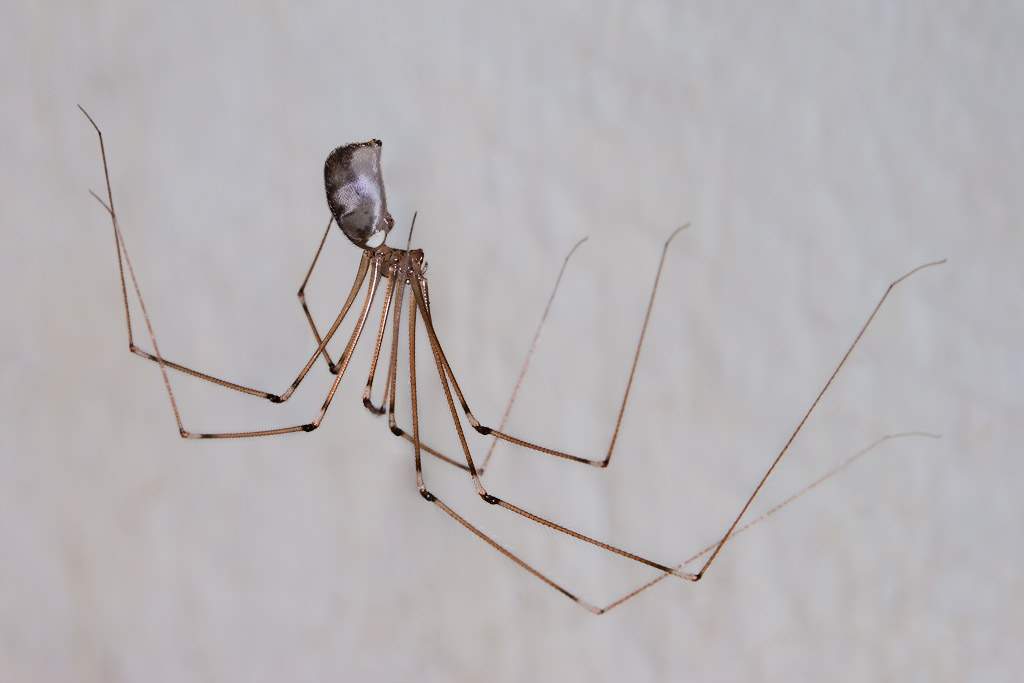 A characteristic feature of this baby (the length of adults is only 7-10 mm.) is the ability to tremble with the whole body and the net, in case it was disturbed. The trembling occurs with such frequency that the outlines of the spider blur in space, and it is almost impossible to see it.

Despite its strange feature, the phalanx spider is completely harmless to humans, and when it penetrates the skin (by 0.1 mm), a person feels only a slight burning sensation. 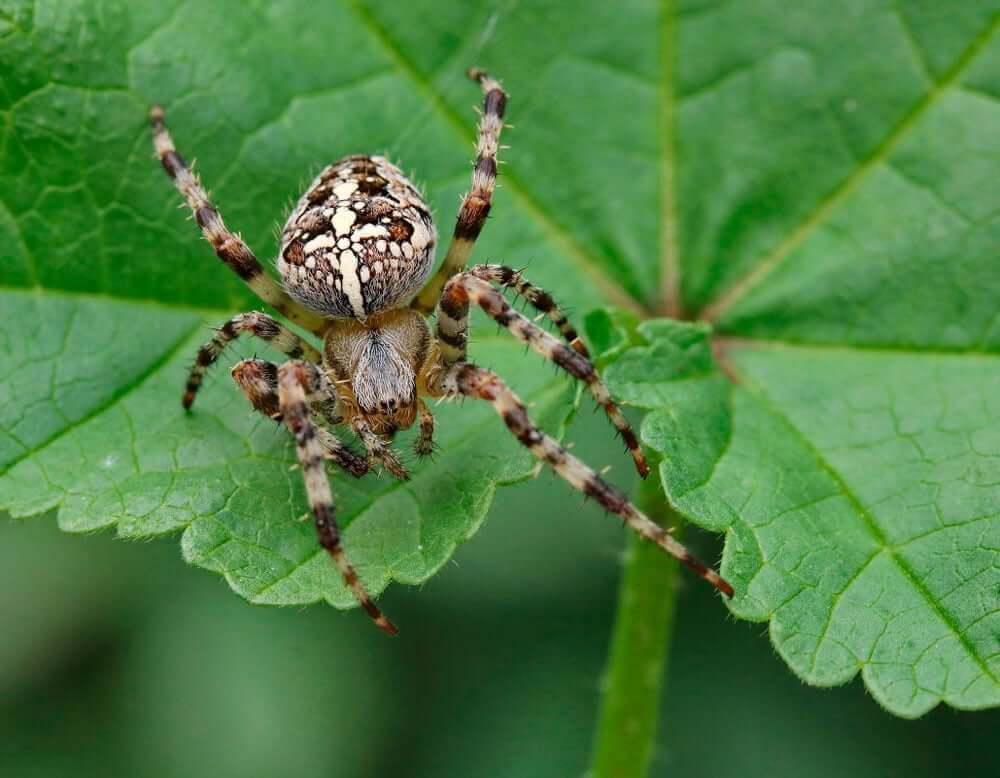 There is a statement that the spider is dangerous to humans, but in fact, this is a myth – one of the most common spiders is poisonous only for small animals: rats, mice, etc.

The European garden spider is considered peaceful, but when outdoors it can cause some inconvenience. This species prefers places with high humidity, most often it can be found in gardens or shrubs that grow near water bodies.

The spider got its name due to its appearance – on the back of the arachnid there is a cross formed of white spots. Females are larger than males – their size reaches 25 mm, and the male does not exceed 11 mm. 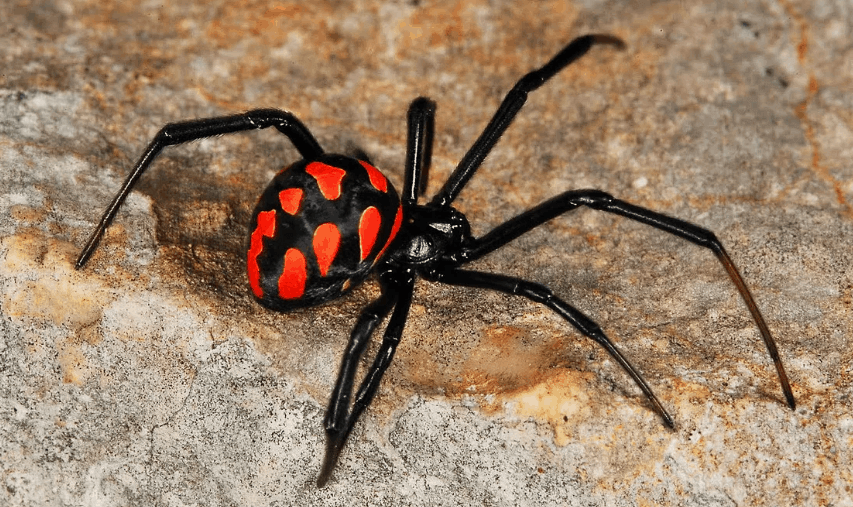 In another way, Latrodectus tredecimguttatus is called the “Mediterranean black widow“. The reason for this is two facts: the color (there are red spots on its black abdomen, but in adult females they are absent – black spiders resemble a widow) and the treatment of the female with the male – after mating, she eats him.

It is not surprising that one of the most dangerous species of spiders has been nicknamed the “Mediterranean black widow“. The spider has an interesting body structure – its abdomen is shaped like a ball. The bite of a Latrodectus tredecimguttatus is very dangerous, but all the people should not worry (if only residents of Azerbaijan, they can also be found there), because spiders live in North Africa and Central Asia. 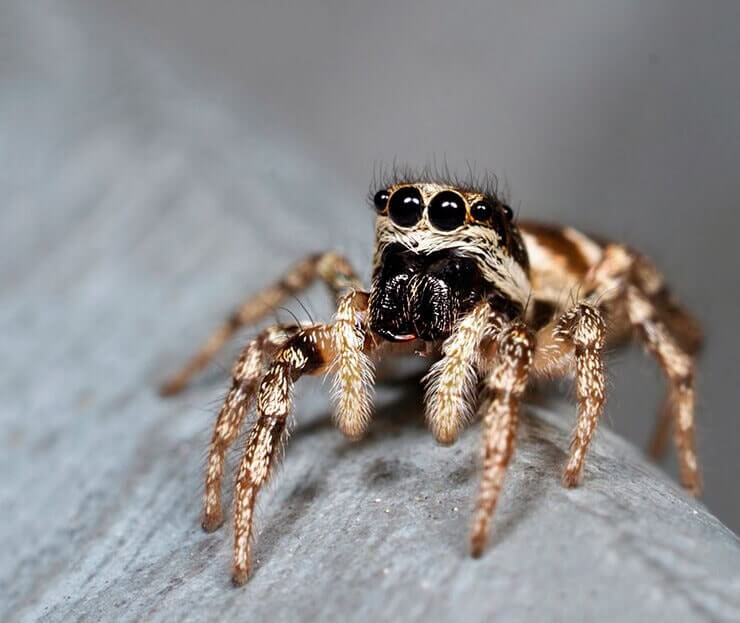 This spider species has excellent vision, providing an all-round view of almost 360º. A pair of peepholes in front, like binoculars, gives a magnifying image.

The muscular horse was named after the mythological character of the son of Hercules. The jumping horse can be attributed to the smallest spiders in the world, but to one of the largest representatives of the jumping spiders – its length reaches 2 cm.

This interesting arachnid can be found in Southeast Asia, in forests, near swamps, and in foliage. The spider has one peculiarity – it does not weave webs, but during the hunt uses a safety thread, attaching it to a solid surface. 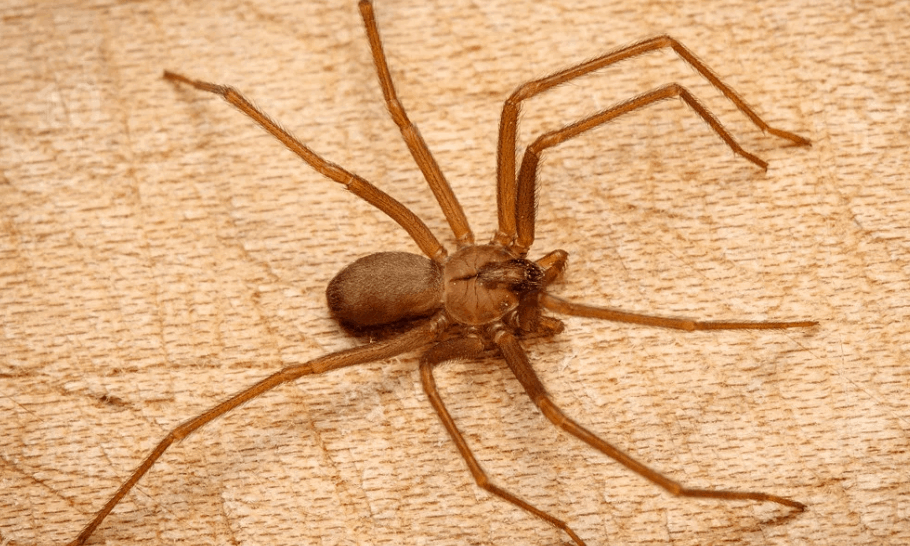 The hermit spider is quite tiny, with legs its dimensions do not exceed 20 mm, but this does not prevent it from carrying a serious danger to humans. Its poison is so strong that without timely medical intervention, a person can simply die. In this case, the pain is not felt immediately, and the person can become a victim during sleep.

The brown spider likes to live in abandoned buildings, but it can also get into an apartment building. It is distinguished from others by the number of eyes – usually, a spider has 8 of them, and this species has 6. Despite the fact that the spider is called brown, in reality, they are also gray or dark yellow.