Top 10 largest whales in the world

Largest whales: Several tens of thousands of animal species live on our planet, but only a few of them are of impressive size. Animals live everywhere: on land, in the air, underground, and in water. We will stop at the last place of residence of living beings.

From childhood, everyone knows that whales are the largest animals living in the aquatic environment. But few people realize that among them there are also incomparable giants.

We present you the 10 largest whales in the world

The blue whale is the leader of our ranking of the largest whales in the world. It is considered the largest creature that has ever lived on the planet. The mammal is 33 meters long and weighing more than 150 tons, feeds on plankton, and small schooling fish.

Blue whales live alone. Sometimes they get lost in small groups, but even in them, they swim separately from each other. They inhabit the entire territory of the World Ocean. On average, blue whales live for about 80 years. The oldest officially recorded age of the animal was 110 years.

Currently, the blue whale is on the verge of extinction. And in the 60s of the last century, it was practically exterminated. Scientists are doing everything they can to increase the population. Now the number of mammals is 10,000. 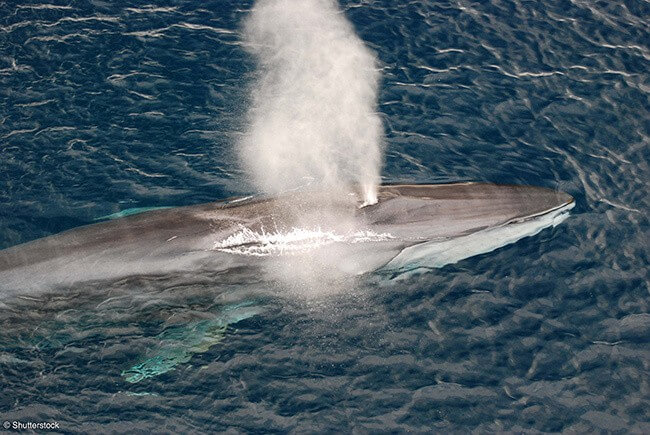 The fin whale is the second-largest animal in the world and the closest relative of the blue whale. The species that live in the Northern and Southern Hemispheres belong to the minke family. The maximum adult length reaches 27 meters. The size of the females is larger than the size of the males, but their weight is approximately the same from 40 to 70 tons.

An animal with a dark gray back and a white belly prefer to live alone. But sometimes it gets lost in flocks of up to 5-6 whales. It is considered the fastest whale in the world. Its speed reaches 50 km / h. It dives to a maximum depth of 230 meters. 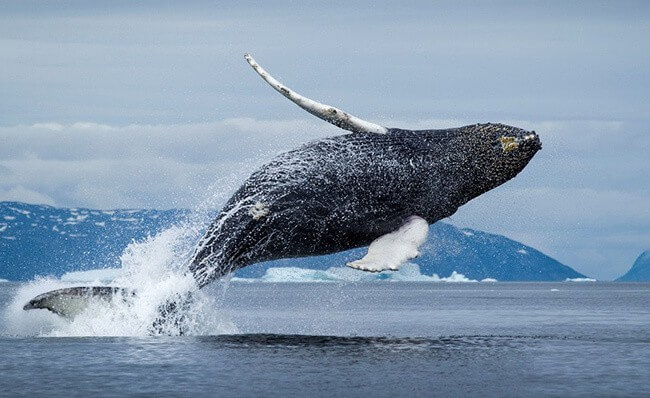 The Bowhead whale is the most seasoned whale in the world lives in the polar regions of the Arctic and off the coast of Greenland. It has a size of 18-22 meters and a bodyweight of 75 to 150 tons, depending on the sex of the animal. The mammal accelerates to a speed of 20 km / h. It dives to a depth of over 200 meters and can stay there for 40 minutes.

Lives about 40 years. Some whales can exist for more than 100 years. The bowhead whale has a lifespan record of 211 years. The animal, ranked in the third position of the top largest whales in the world, feeds on plankton and crustaceans. 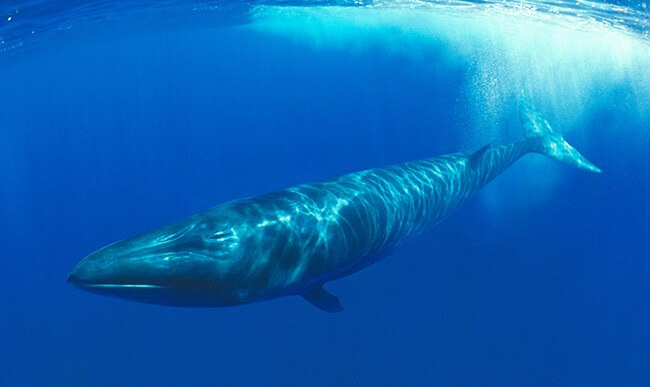 A whale reaching a length of 20 meters and a mass of 30 tons belongs to the family of minke whales. A dark-gray whale with a large dorsal fin feeds on mollusks, schooling fish, and crustaceans. Sei whale has been living for over 60 years. Puberty occurs at the age of 5-7 years.

It develops a speed of over 25 km / h. Habitat: the entire World’s Ocean in places with temperatures above 8 degrees, but below 26. In Russia, this species of one of the largest whales in the world can be found near the Kuril Islands and in the Barents Sea (rarely). 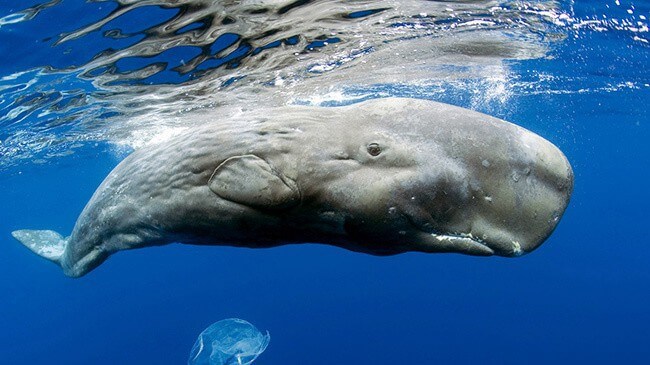 Sperm whales live in groups of several dozen whales. This type of mammal has a pronounced sexual dimorphism, that is, females are smaller, differ in the shape of the body and head. The largest whales of males reach a length of 20 meters and weigh 50 tons. Females are 15 meters, 20 tons.

The mammal, which ranks in the middle of the ranking of the largest whales in the world, feeds on shellfish and squid, reaching 14-18 meters in length. It is considered an aggressive animal, so hunting it is very risky.

The habitat of the sperm whale is distributed throughout the oceans, with the exception of the coldest regions. 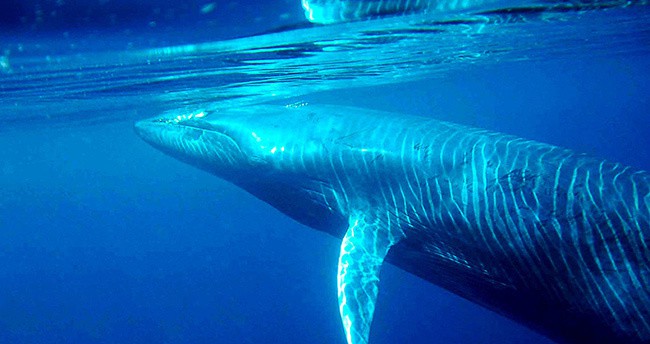 This species of whale is not very different from the North Atlantic right whale, but it is larger. Particularly large individuals reach 19 m in size. The weight of the Japanese whale does not exceed 80 tons. Individuals of black color with a small dorsal fin feed on crustaceans. They swim slowly, but they like to jump out of the water often. The birth rate of Japanese whales is low. Females give birth to one cub every three to four years.

Moreover, they themselves must reach the age of 6-12 years for puberty. They live in the North Pacific Ocean, sometimes found off the coast of Mexico. Now the Japanese whale is threatened with extinction. On the planet, there are 400 whales of this species, one of the largest animals in the world. 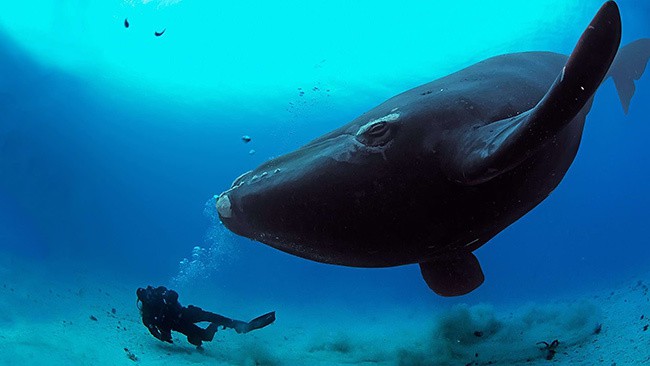 Another species of the Balaenidae whale family. Animals are 18 meters in length and weighing up to 80 tons, have a color ranging from dark brown to bluish-black. A distinctive feature of southern right whales is growths under the jaw and above the eyes. The head is 1/3 the size of the body. The dorsal fin is missing. Females of the southern right whale are physically larger than males.

The animal is in the 7th position among the largest whales in the world, lives in the Southern Ocean (temperate and subpolar latitudes).

For a long time, this species was under threat, but, at present, the number of whales exceeds more than 7,000. 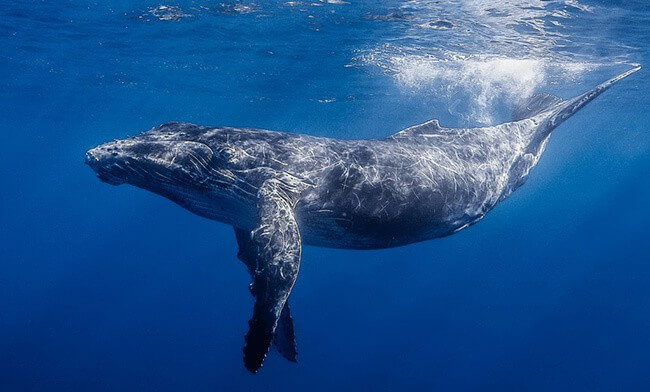 Another animal in our ranking of the largest whales in the world, from the minke family. It got its name from the hump-shaped dorsal fin. The largest whales of this animal species reach 17-18 meters in size. The Weight of the Humpback whale does not exceed 50 tons.

The whale has a specific body shape and color, very long pectoral fins (30% of the entire body), and a large caudal fin. The species is distributed throughout the world’s oceans, except for the Arctic. In Russia, it is found only in a small part of the Barents Sea. 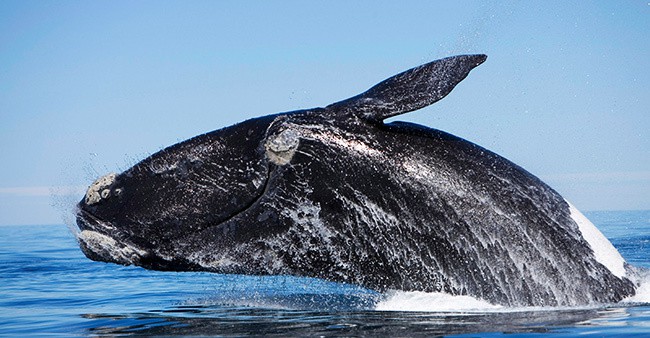 This species of the family of North Atlantic right whale is common in the northern waters of the Atlantic Ocean. Whales are 13-17 meters long and weigh over 100 tons. A distinctive feature of this whale is the absence of a dorsal fin. The black animal, which ranks 9th in the top 10 largest whales in the world, has a large number of parasites on its body. Especially they are teeming with the forehead of a mammal.

The whale’s speed is no more than 8 km / h. As a result, it becomes easy prey for humans. It is currently on the verge of extinction. The number of surviving whales does not exceed 300 whales. 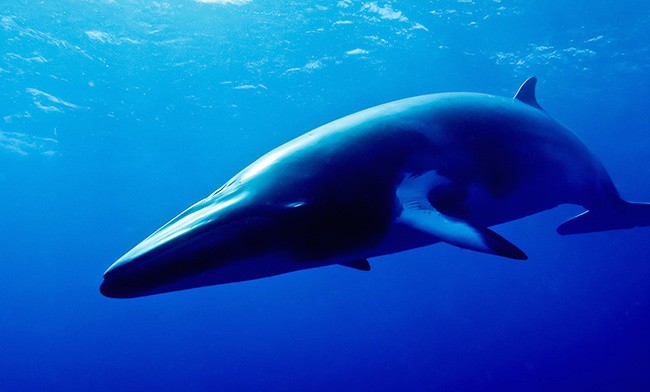 The smallest whale of the minke family reveals the world’s top largest whales. An animal that feeds on plankton and small fish has white fins and a belly, and a dark gray upper body color. A distinctive feature of the minke is its white stripes on the back of the head.

It lives in the waters of both the Northern and Southern Hemispheres. The largest whale was 10.7 meters long.

The leader in the number of annually harvested minke whales is the “Land of the Rising Sun” – Japan. Whaling is about 900.