10 wild animals you can have at home

Wild Animals: Almost everyone in the world loves pets or animals. Surely each of you at least once in your life lived at home with a little pet. Cats, dogs, fish, parrots, hamsters, and turtles are so firmly embedded in our lives that we do not even think that once all these animals lived in the wild and only then were domesticated by humans.

In recent decades, people around the world are increasingly domesticating new animals that have never lived in a human home before. Instead of kittens and puppies, people bring raccoons, owls, and even foxes to their homes.

Unusual animals at home are quite a responsible event, they can not then be released back into the wild, where the former pet will simply die.

A special approach is important for each wild beast and a lot of effort to tame it. But the efforts spent on caring for wild animals will pay off with a sea of positive emotions when you watch an owl hooting at home every day or a raccoon rinsing fruit in a basin.

These are the 10 wild animals you can have at home 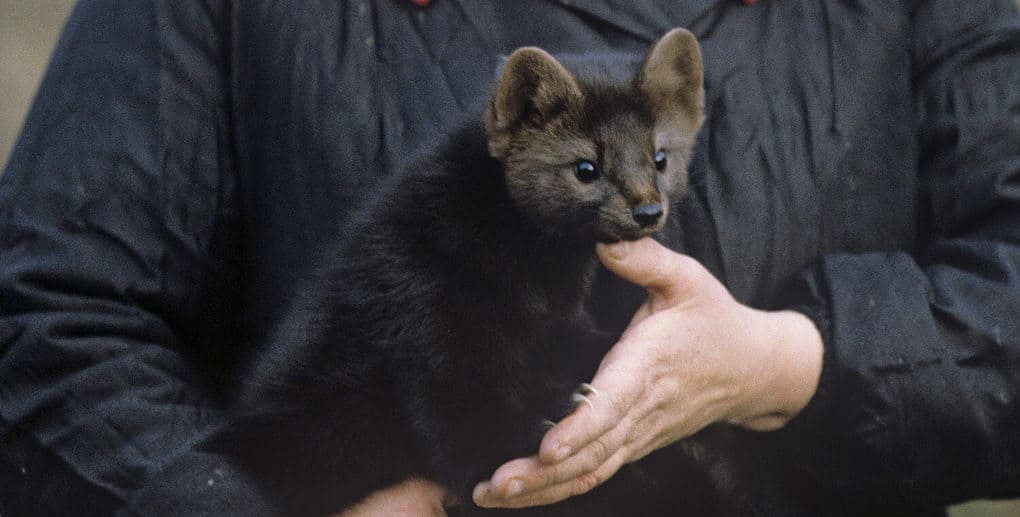 Most often, sables (like raccoons and foxes) are bred out of a desire to save the animal from the fur farm. There, fur-bearing animals are grown, so that later they can make a fur product from the skin of a sable.

Sables are insanely beautiful, smart, sociable, active, and incredibly clean. Such a mobile animal will need a whole room, or at least a heated loggia, which must first be carefully prepared for a new inhabitant.

Please note that the sable likes to mark its territory. Sable tags are odorless, and this makes life much easier for the owner. But there were cases when the sable urinated on the network extension cable, and the wiring was shorted.

An active animal will demand all your attention, but in return, it will repay you with incredible friendship and loyalty. 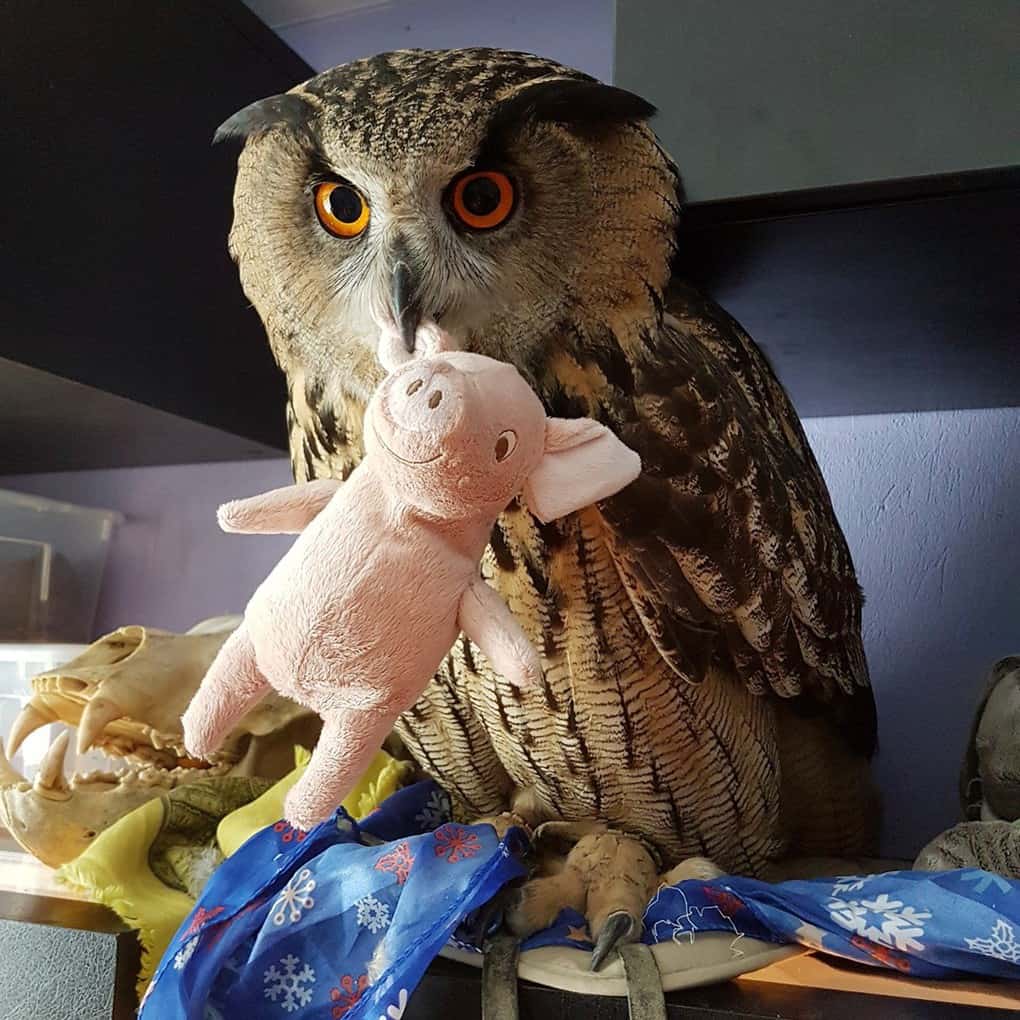 People began to keep owls at home from the moment the first part of “Harry Potter” was released. In the early years of the little Wizard movie saga boom, there were sad statistics about owls that were constantly dying all over the world. People, without thinking about this decision, bought owls, and then put them out of the house in the hope that the bird would just fly away.

The fact is that caring for owls is very difficult. And you need to decide to get such a bird very responsibly and rationally. They are moody, awake, and noisy at night, and their powerful claws can leave real wounds on your arms and shoulders.

Taming an owl is very difficult, but caring for it is an even bigger, gigantic labor-intensive process that not everyone is ready to go to. 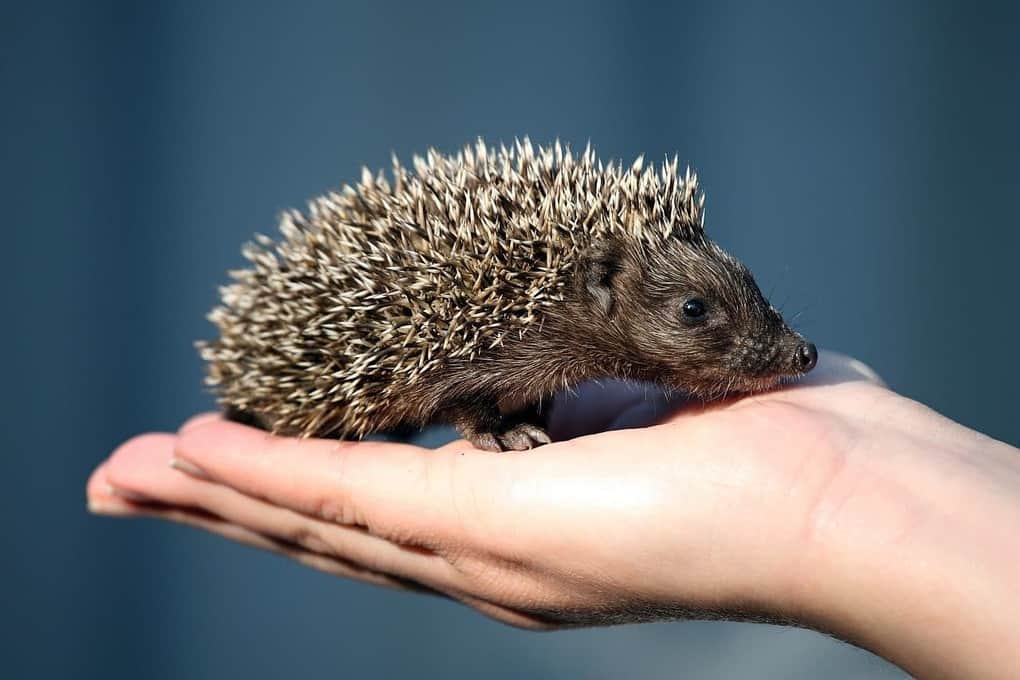 Taking a hedgehog to your home directly from the forest is, of course, free and quite simple. But this is strongly discouraged. Adult wild hedgehogs are almost impossible to tame.

It is best to contact the breeders of African hedgehogs. They are home to small animals that have lived side by side with humans for generations. Therefore, taming an African hedgehog will be much easier.

A small animal will give you a lot of positive emotions if you are ready to surround it with proper care and attention in return. Hedgehogs are unpretentious in food, but it is more time–consuming and responsible to properly equip the cage, clean it and monitor the health of the hedgehog. 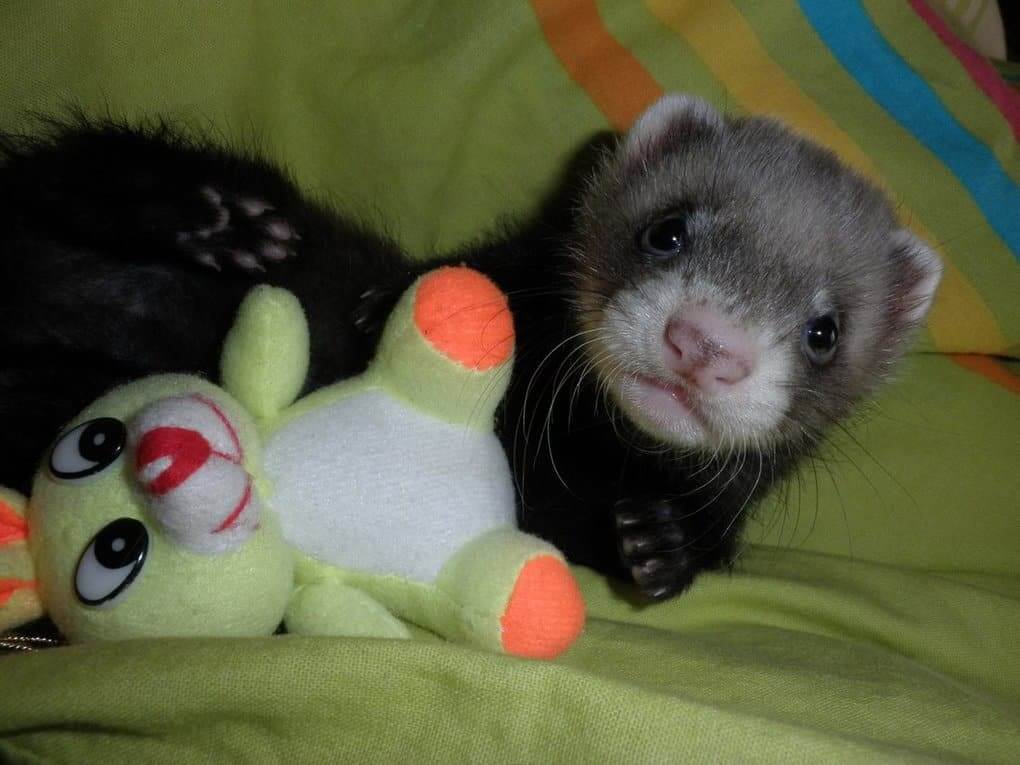 The fashion to have ferrets at home began in India recently, it is only about 10 years old. In Europe, ferrets were attracted as pets for quite a long time, almost half a century ago.

Ferrets are very curious, quick-witted, and intelligent animals. They get along well with dogs, but a ferret can have a conflict with a cat. You should not have a ferret in a house where there are small children. Because of its curiosity, the animal can get into an unpleasant situation and, for example, bite the child or scratch it painfully.

Ferrets love to play, so be prepared to provide the animal with lots of toys and your own free time. 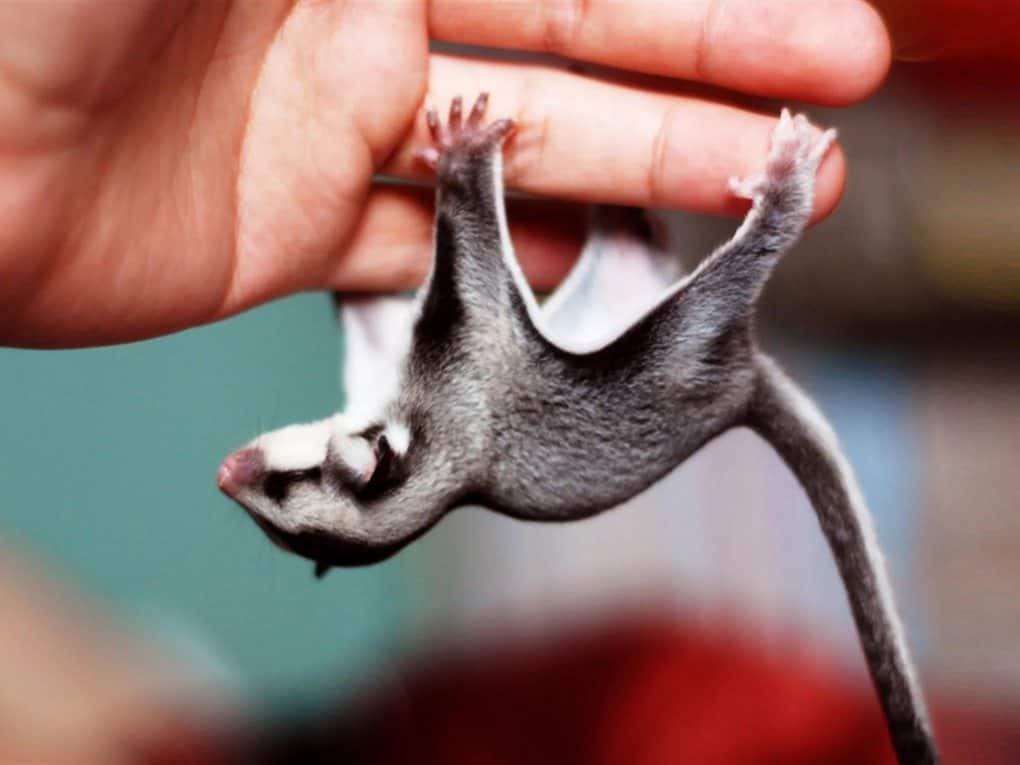 The main feature of the content that future owners of flying squirrels or Sugar gliders need to know is that the animal is insanely sociable. You will have to devote several hours a day to your original pet, otherwise, it will inevitably get sick.

A flying squirrel can become a loyal companion, but in return, it will require you to carefully and properly care for it. The diet of these animals mainly consists of protein food, so they are perfect for dried insects, as well as fruits.

The flying squirrel cage should be spacious enough so that the marsupial beauty can safely fly in it, spreading its membranes. 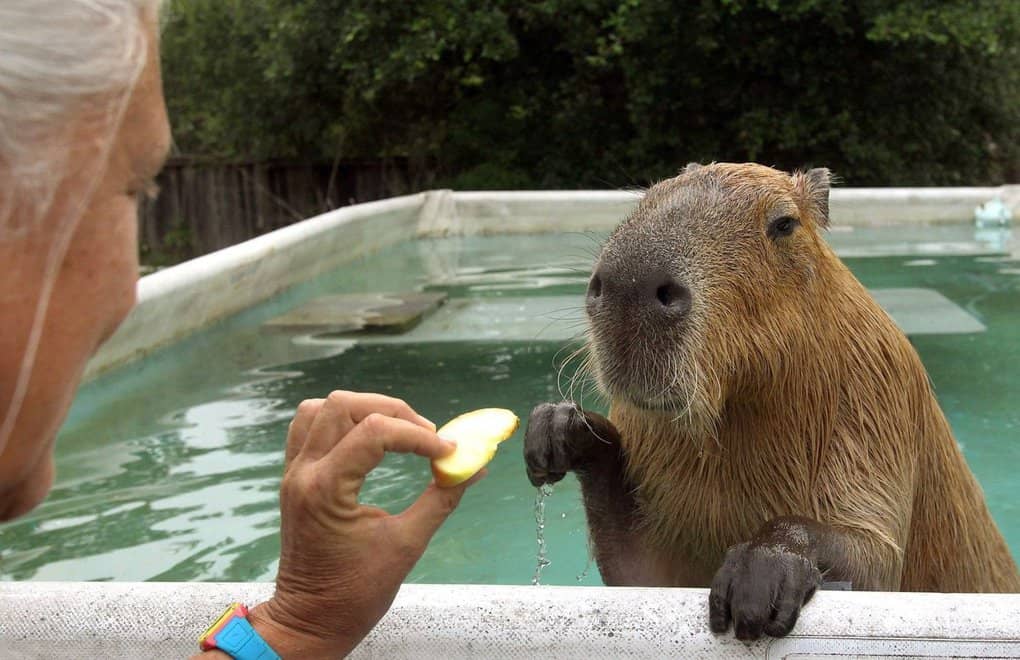 The capybara is an amazing animal. No wonder the Internet is full of photos of a cheerful capybara sitting quite friendly next to cats, dogs, monkeys, and even crocodiles.

Surprisingly, even the most dangerous predators among animals never touch the capybara. All animals are irresistibly drawn to communicate with this creature. This giant rodent has won the love of the whole world.

A few capybara owners are always enthusiastic about how tame and affectionate they are. Despite its formidable appearance, this wonderful creature does not pose any danger to humans and can become a loyal and kind friend. 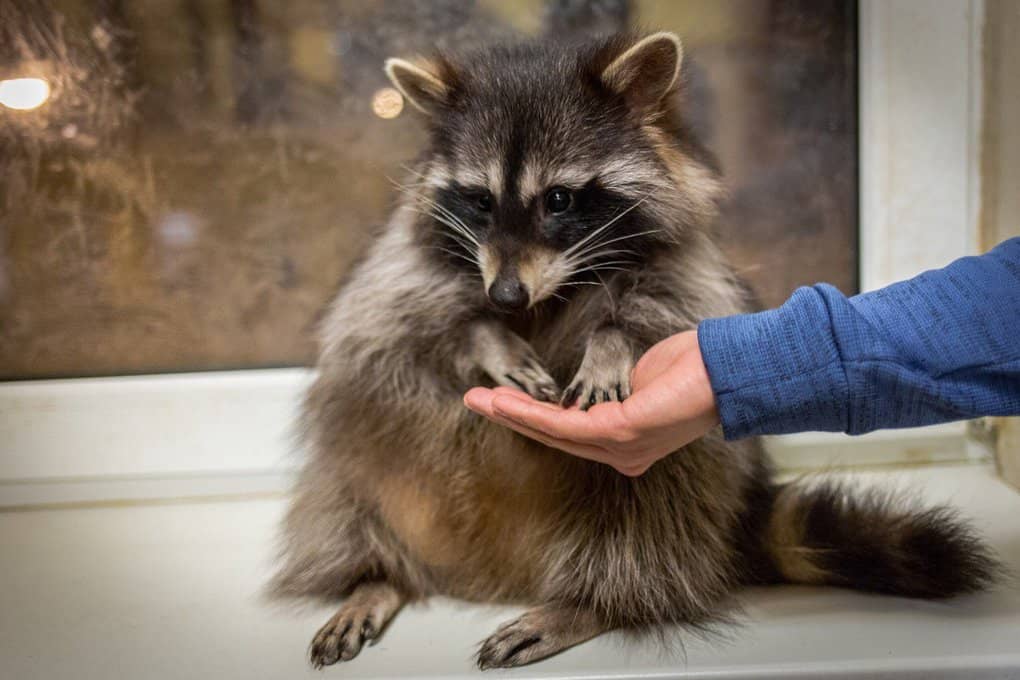 Getting a raccoon in an apartment is funny and adventurous. Raccoons are insanely curious, so in rooms with sockets, electrical appliances, and water, the animal should always be under your close supervision.

It is recommended to allocate a separate safe room or a spacious aviary for the raccoon, where food, plenty of water, and various toys are always available.

Raccoons are social animals, they are great friends with cats and dogs. It is better to start a hooligan animal “in a mask” from its infancy so that the raccoon has time to get used to you, master the tray, and become as homely as possible.

But you can’t make a raccoon completely tame – these animals are too curious and freedom-loving. 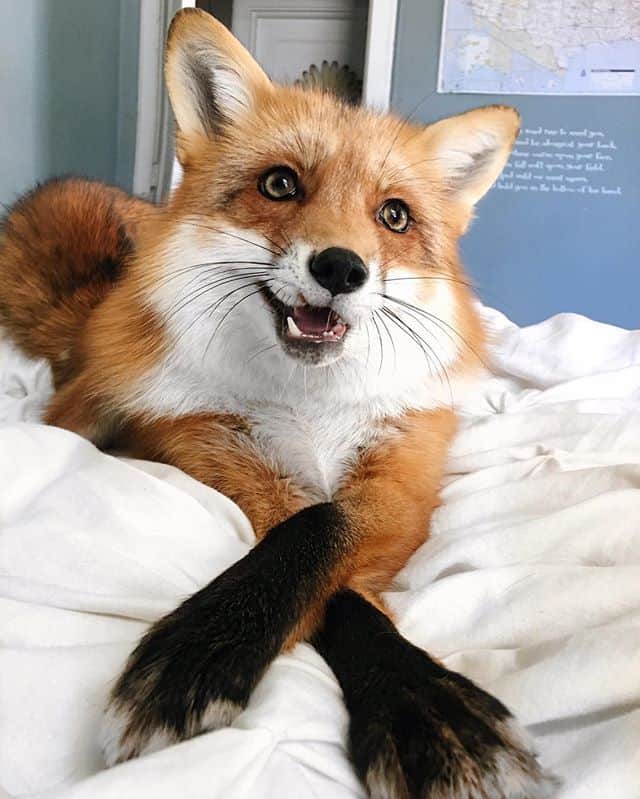 It is most desirable to get a fox if you live in your own house and are ready to build a spacious aviary in your yard according to all the rules. The main thing is that the cunning red-haired thief does not dig a hole in it and does not run away to freedom.

It is not recommended to keep foxes in the apartment-again, because of the constant digging and the specific smell of wool.

Care for foxes needs careful, the beast can not be left for a long time without attention. You will have to play and walk a lot with the fox.

But to teach it to cope with natural needs only on a walk will not work. Devotion and gratitude, despite all your efforts, also do not expect – the fox in character is not at all like a dog. 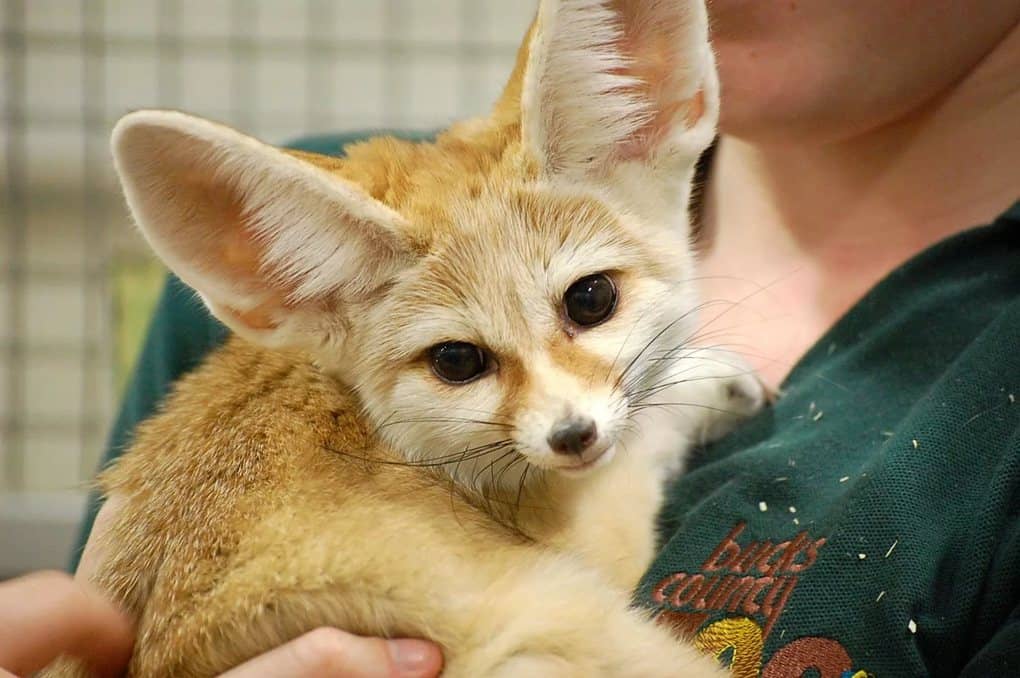 Fenechs are charming little foxes with huge funny ears and a sly expression on their faces. Very many people who think about having a wild animal at home, pay attention to the touching Fennec foxes.

But buying such an animal is very expensive, so few people can afford such a luxury. And the maintenance of such a fox is not easy. It is advisable to allocate a separate room for the beast, where it would not get sunlight. There should also be sand in the room because these animals come from deserts and like to dig it up.

Fennec is a heat-loving animal, even minimal coolness can lead the animal to disease and death.

To tame the Fennec fox, you need patience, care, and attention. If you’re willing to spend enough time with your big-eared pet, you’ll get an incredibly loyal friend in return. 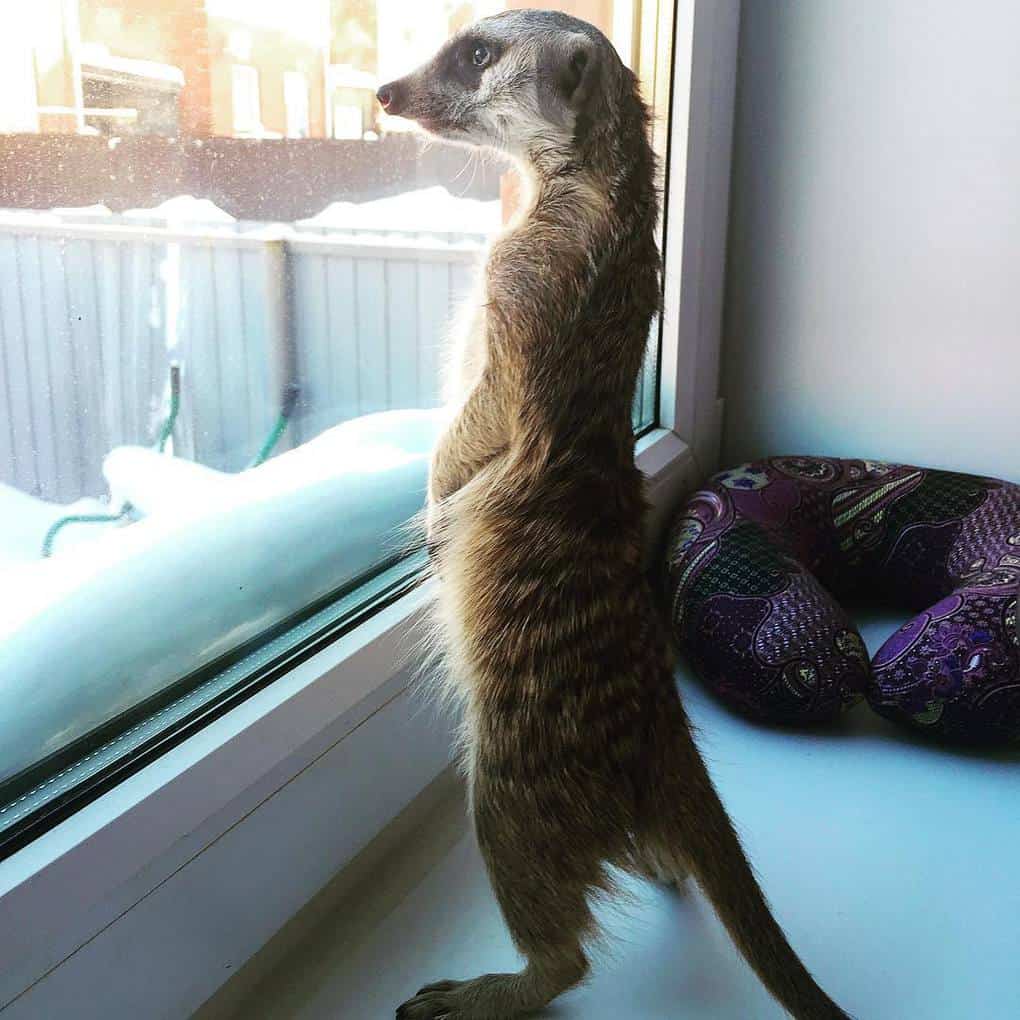 Charming miniature animals from the mongoose family are insanely charismatic and energetic. To keep a meerkat at home, you will not need a special aviary or cage. The baby will calmly move around the house and sleep wherever it is necessary.

Meerkats can easily be trained to the tray, like the most ordinary cat. They feed on mushrooms, nuts, lean meat, milk, and sour cream.

Meerkats are companionable animals. They will easily make friends with a dog and a cat. But they get along best with each other, as they live in groups. Therefore, try to get two touching creatures at once, so that they will not get bored one by one.