What is a Linux shell?

In this article, we will understand what a shell is and why we need it, and also look at the most commonly used command shells in Linux and Unix.

Contents of the Article show
What is a shell?
Internal and external shell commands
How do I know which shell I have installed?
Command shell types

What is a shell?

Shell (or “shell”, “command shell” ) is not only a command interpreter that provides an interface for interaction between the user and the operating system kernel but also a kind of programming language in which there are such constructions as conditional branching operators, loops, variables and much more.

The operating system (OS) launches a command shell for each user when they log in or open a terminal window. The first thing a user sees in a terminal window is a shell prompt – it usually consists of the username and hostname, separated by a character @, followed by the path of the current working directory and one of two characters: $or #.

If the user is not endowed with special rights, then the symbol will be displayed as a prompt to enter commands in the terminal $. If you were logged in as a privileged (root) user, then in the terminal you will see the symbol #:

Note: The tilde (~) sign indicates that we are in the current user’s home directory.

After being prompted, the user enters various commands into the terminal, the shell launches programs for the user and then displays the result of their execution in the terminal. Commands can either be entered directly by the user or read from a file called a shell script or shell program.

Below is an example of executing a simple command datethat returns the current date and time:

The commands entered by the user are divided into two types:

To determine the type of command, just enter in the terminal windowtype <type_name>:

As you can see, the team dirs, pwd, cdand true– are internal commands of bash. But the commands uname, idand whereis– are external, because they link to the corresponding files in the / usr / bin directory.

For a complete list of internal shell commands, use the command help: 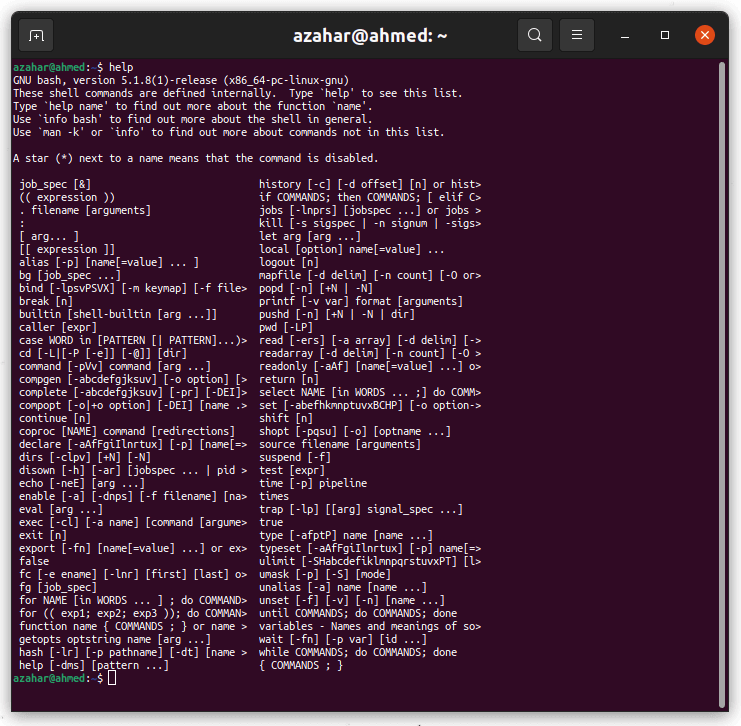 How do I know which shell I have installed?

If you are just starting with Linux and have not changed your shell, then it is most likely that your system is using bash. The easiest way to find out which shell is currently in use is to refer to the environment variable SHELL:

In addition, you can use a command psthat returns information about the process with a given identifier. In some cases, the shell identifier is the characters $$:

It’s not hard to see that the bash shell is currently being used. To view all available shells on your system, you need to refer to the contents of the / etc / shells file :