Which desktop environment should you choose in Linux?

A desktop environment is an implementation of an abstraction of a real desktop from our life, which makes it easier for us to work with a computer using a specific set of tools, namely:

And all these components can be linked together according to a specific user interface or its design. The design determines how successful your experience of using these components will be. In addition, it also affects the functionality, flexibility, extensibility, and adaptability of the desktop.

Why choose a desktop environment at all?

The type of desktop environment used is often a crucial argument when choosing a distribution because it determines the appearance of the system, the experience of using it, and the possible range of user options and settings. I often compare choosing a desktop environment to choose the interior of a new car. The interface of the dashboard of a car and the location of control elements inside its interior can vary greatly depending on the make and model of the car.

And as we know, car drivers often choose a particular vehicle based on its appearance. If the buyer of a car does not like the interior design of the interior and the experience of using the car, they will make a different choice. The technical characteristics of the car may be less important than how you feel at the wheel. This is also the case with Linux distributions: all the advantages of your chosen distribution will go to the second (or even third) plan only because you will not be comfortable working with it due to the inconvenient desktop environment.

How do I choose the best desktop environment?

Since Linux is a very flexible system, we can simply install a different version (different from the default one) of the desktop environment in our chosen Linux distribution. You can even have multiple desktop environments and switch to the one you need when you log in.

So which Linux desktop is best for you? First of all, it depends on your needs, preferences, and performance of the hardware used.

Do you need a desktop similar to its counterpart in Windows 10 or macOS? Some of them are designed to give you a Windows-style taskbar at the bottom of the screen and the long-familiar Start button. Alternatively, you can have a dock panel like a macOS computer.

GNOME is one of the oldest and original desktop designs in Linux. Over time, its appearance has evolved from the classic Windows XP style (in a variation of GNOME 2, which is currently not supported) to a more modern interface with pop-up panels at the edges of the screen (a variation of GNOME 3). The GNOME Shell is the foundation of several other desktop environments, such as Cinnamon or MATE.

MATE is a variation /fork of GNOME 2, and therefore very much resembles its classic interface. MATE is considered not a very demanding desktop environment, which is well suited for legacy computers.

KDE (K Desktop Environment) – It is one of the most powerful and customizable desktop environments on Linux, with special visual effects and many other handy features. Linux beginners often find KDE a bit confusing, but the various ways to decorate the appearance (in KDE Plasma 5) and the number of different customization options make it one of the coolest and most beautiful desktop environments. 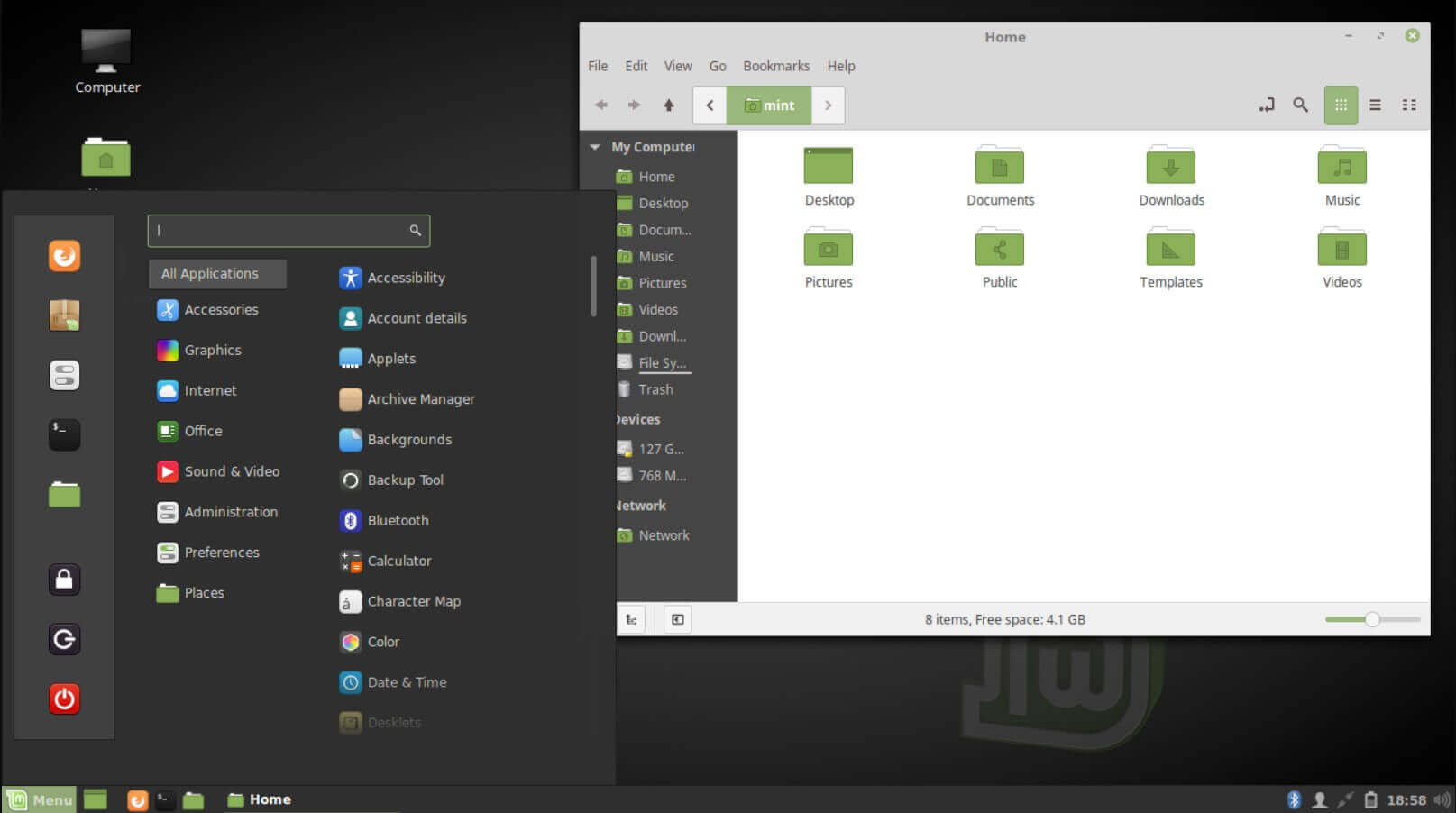 Until recently, it was safe to say that this is a lightweight desktop environment, ideal for both new and old computers, providing a functional interface without unnecessary animation and other special effects. But recently, Xfce’s appetite for consuming computer resources has grown so much that in some places it has become more voracious than even KDE itself (who would have thought).

LXLE is a fast, lightweight desktop with additional functionality. It consumes less system resources than Xfce, which makes it a better choice for use in conjunction with older hardware. 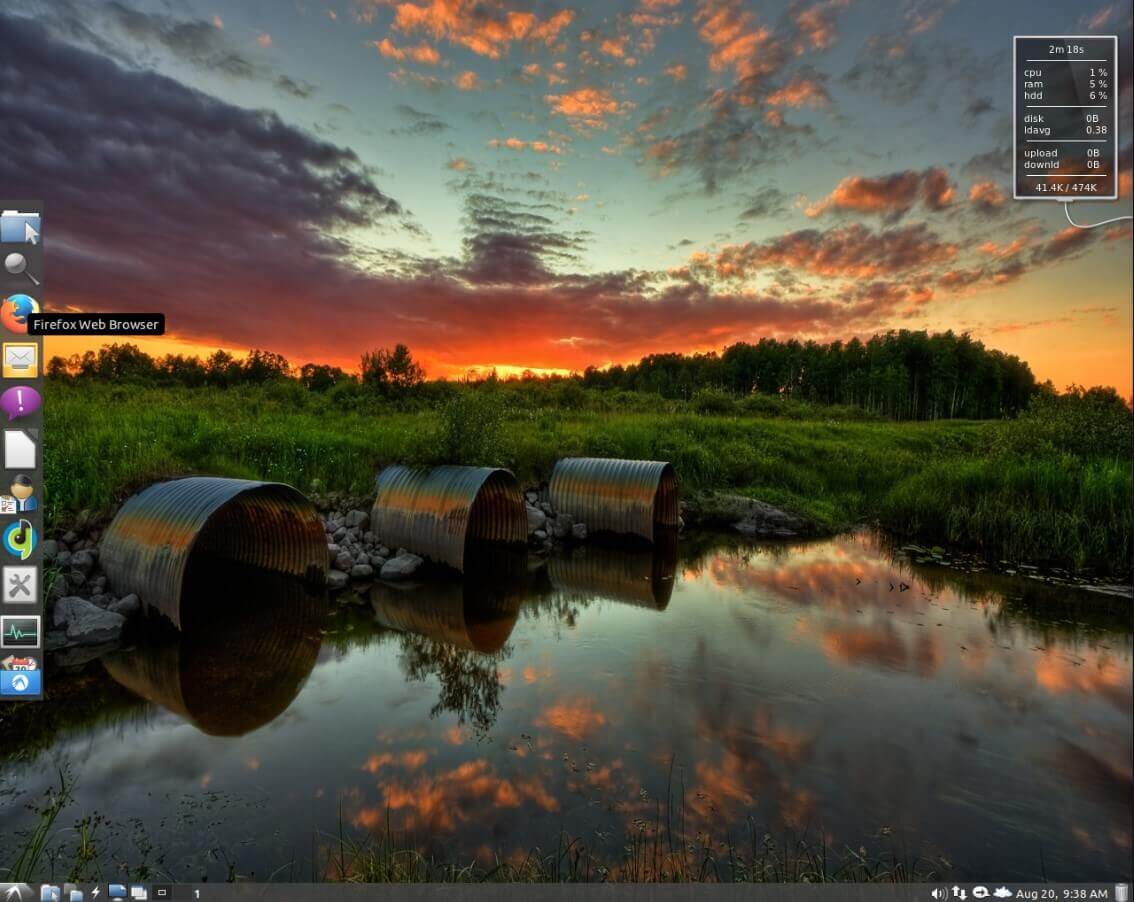 LXDE (abbr. “Lightweight X11 Desktop Environment”) has a conventional appearance and many system settings for configuration according to your preferences. The appearance is very similar to Xfce. 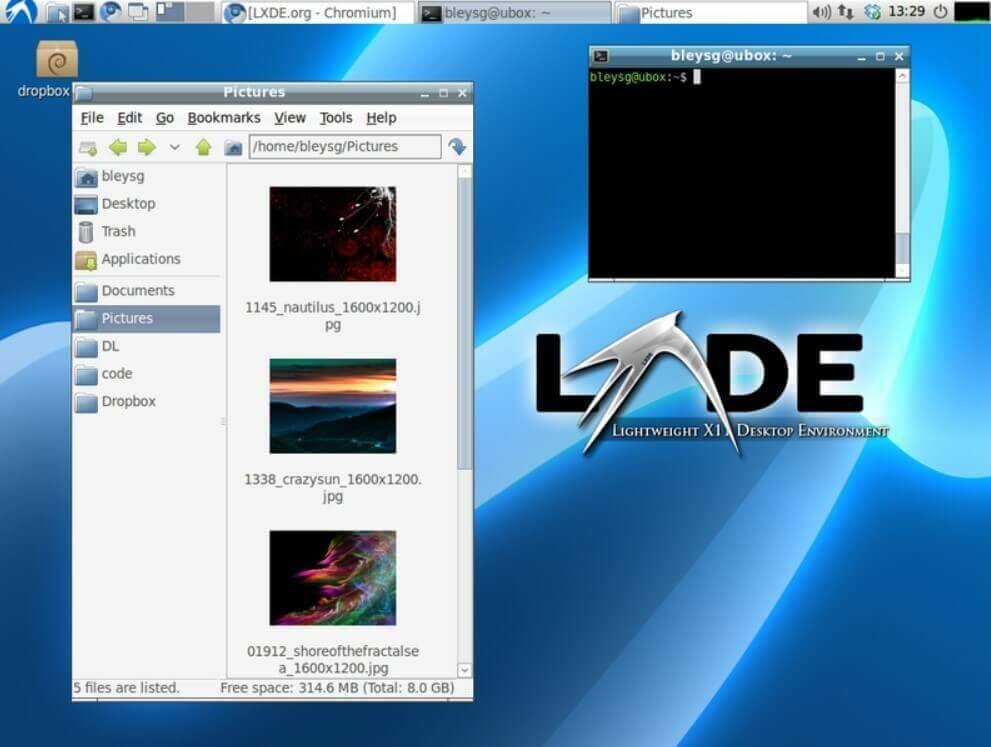 LXQT is a kind of reimagining of LXDE, a version with improved performance that combines the LXDE shell and the Razor-qt desktop. Lightweight, modular, fast, and easy to use. 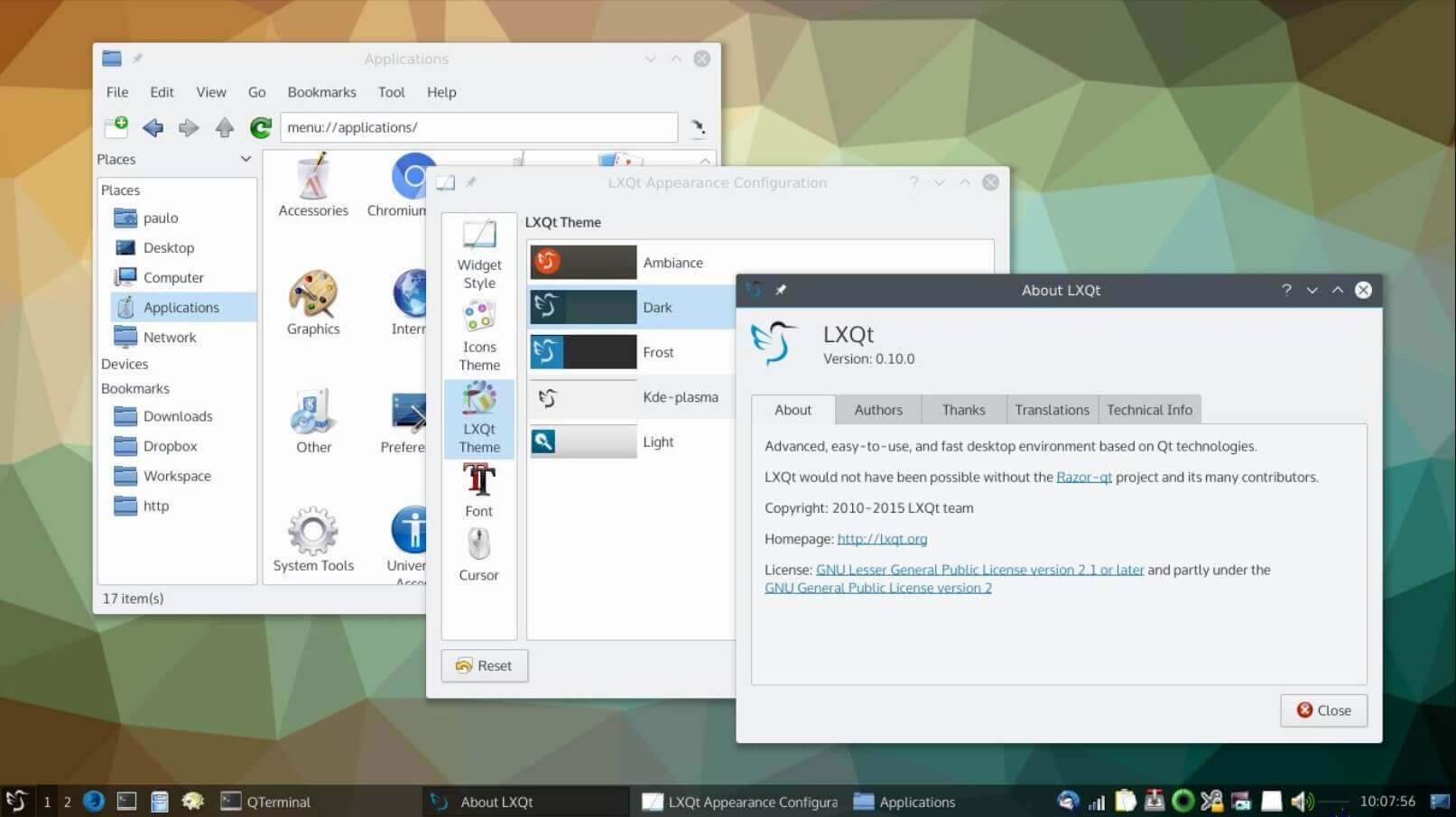 Pantheon was originally conceived as a standard desktop environment for the Elementary OS distribution. Unlike other shells, Pantheon is distinguished by its modern appearance, combining graphic elements of Android and macOS, and a simplified approach to desktop management. 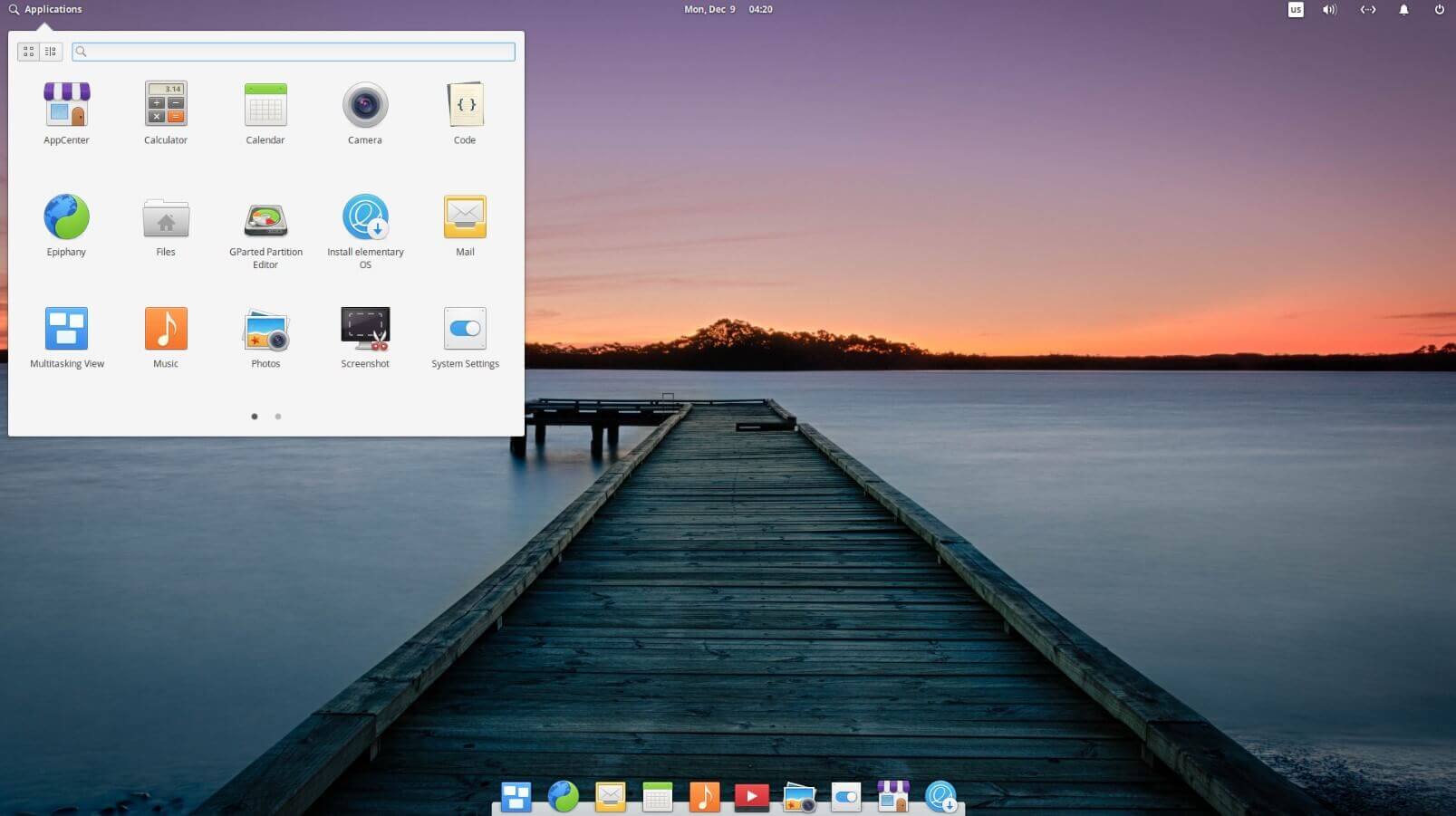 Budgie is a desktop designed with the needs of the modern user in mind and focusing on simplicity and elegance. Having an initially simple and minimalistic appearance, it can be configured to mimic the appearance of the GNOME 2 desktop. Very easy to use. 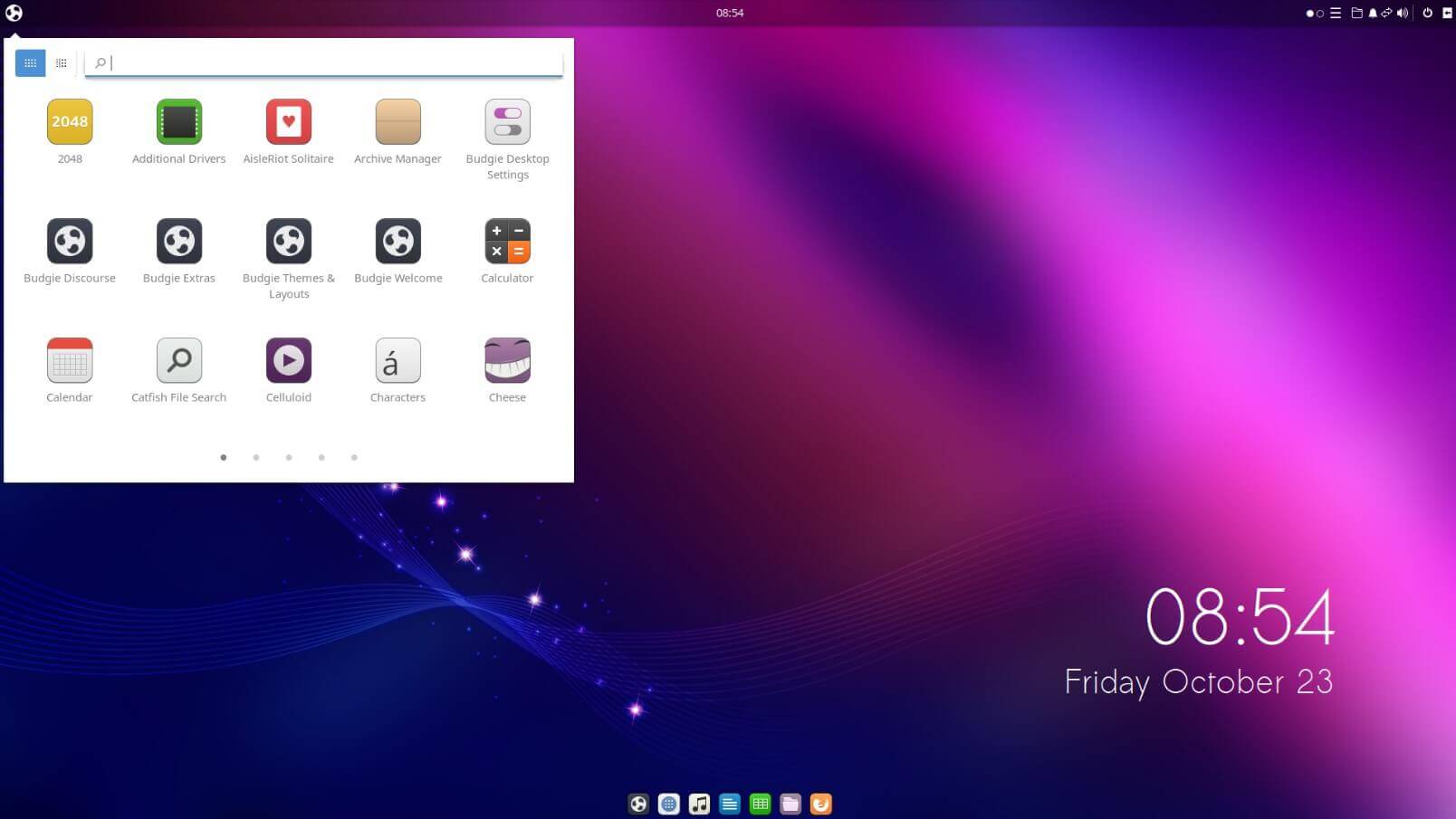 Comparison of desktop environments in Linux

We will compare the four most popular desktop environments: GNOME, KDE, Xfce, and LXDE. All of them offer excellent graphical user interfaces( GUIs), which can be put on a par with similar desktops in Windows and macOS.

If you ask different people which of these four options is the best, you will probably get a lot of different answers. This is largely a matter of taste. In addition, the capabilities of your computer hardware may also be important when making a decision. For example, users with older computers prefer to look in the direction of Xfce or LXDE, while users with newer hardware can get a wide variety of desktop graphics effects by choosing GNOME or KDE. My recommendation would be to try out all four shells and decide for yourself which one works best for you. GNOME, KDE, Xfce, and LXDE are all excellent, and each can be customized to suit your needs to some extent.

GNOME 3 is a radical change from the “classic” GNOME 2. x. GNOME 3 has only one panel located at the top of the desktop, and there is no longer a traditional menu. 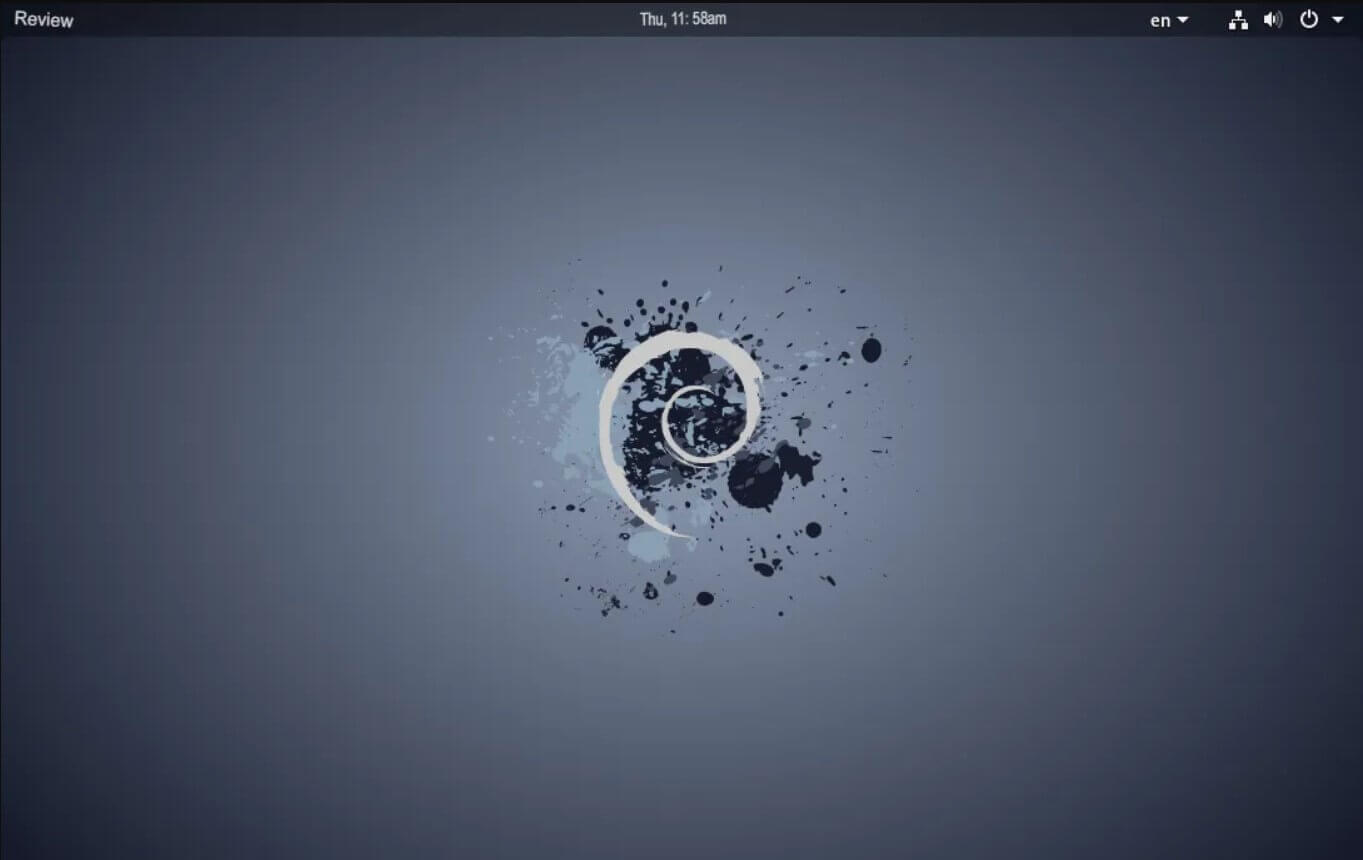 To access programs, users click on “Browse” in the upper-left part of the screen, resulting in a pop-up launcher panel on the left. It has an icon in the form of dots – “Applications”, which provides access to all installed applications. There is also a search box that allows you to quickly find the app you need, knowing its name. In addition, when you click on the “Browse” button, a radio button appears on the right side of the desktop. 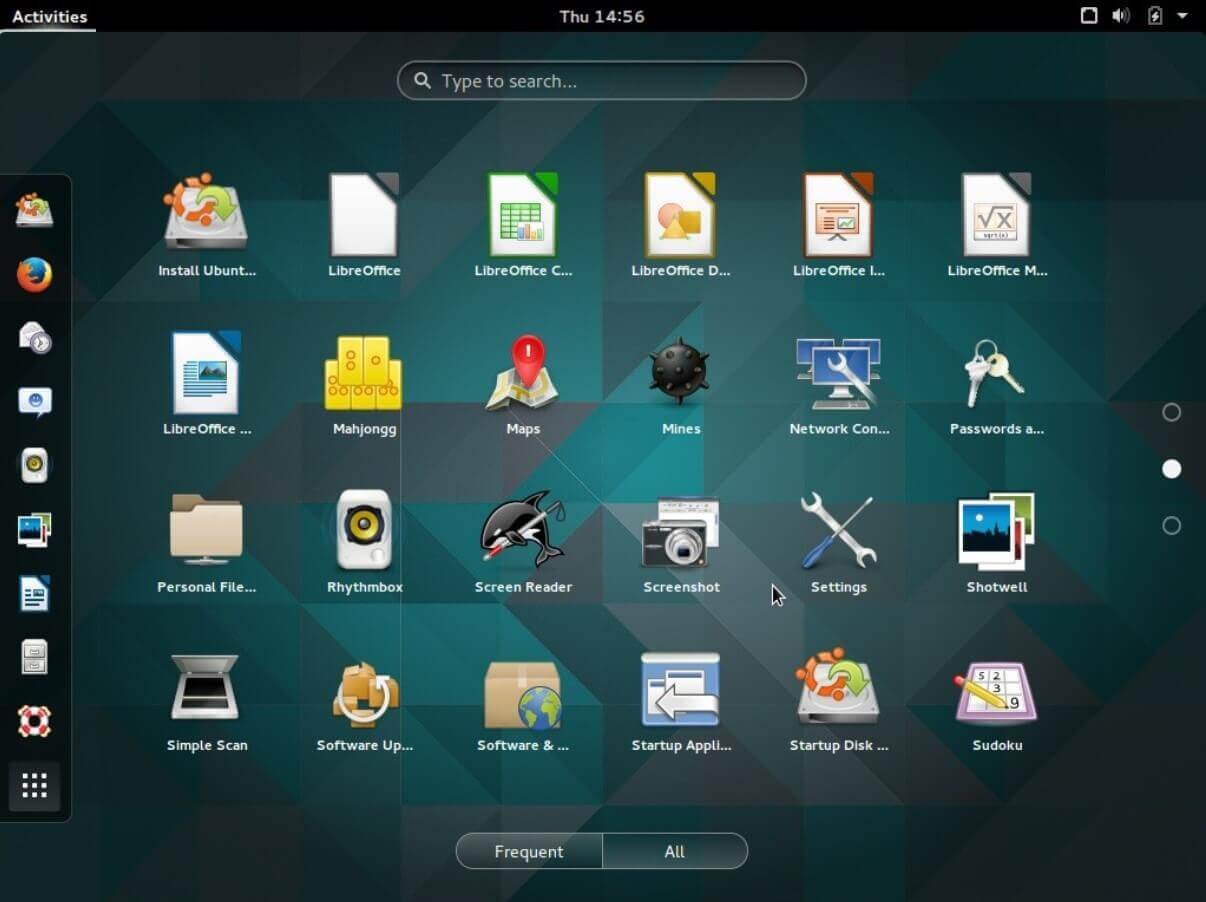 Another change concerns buttons on windows. In GNOME 2. x and virtually any other desktop environment, there are at least three buttons at the top of each window: close the window, minimize the window, and expand the window to full screen. However, in GNOME 3, there is only one button that is used to close the window, and it takes some time to get used to it.

Overall, GNOME 3 is a very simple, clean, and visually pleasing desktop, but also quite cumbersome. 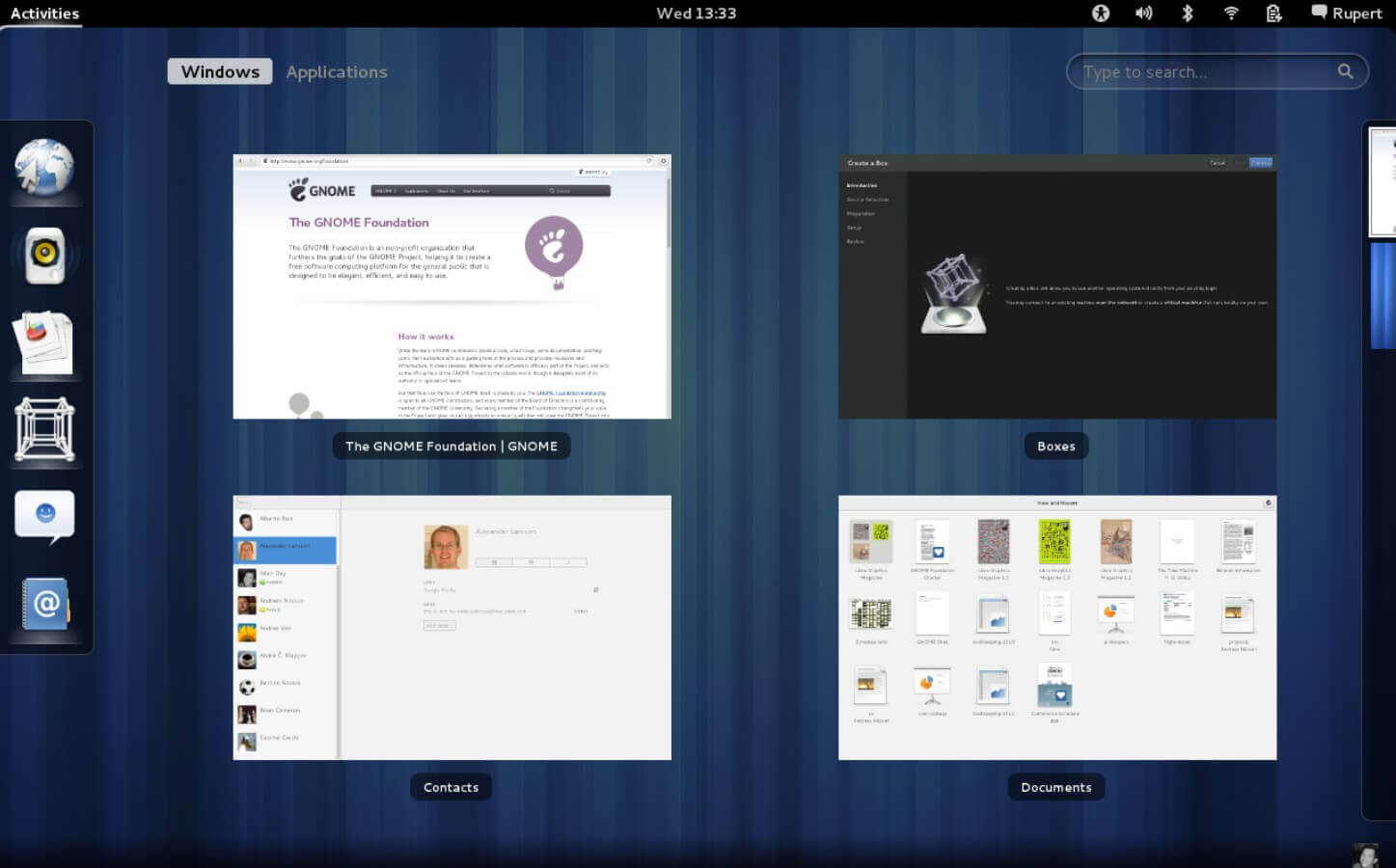 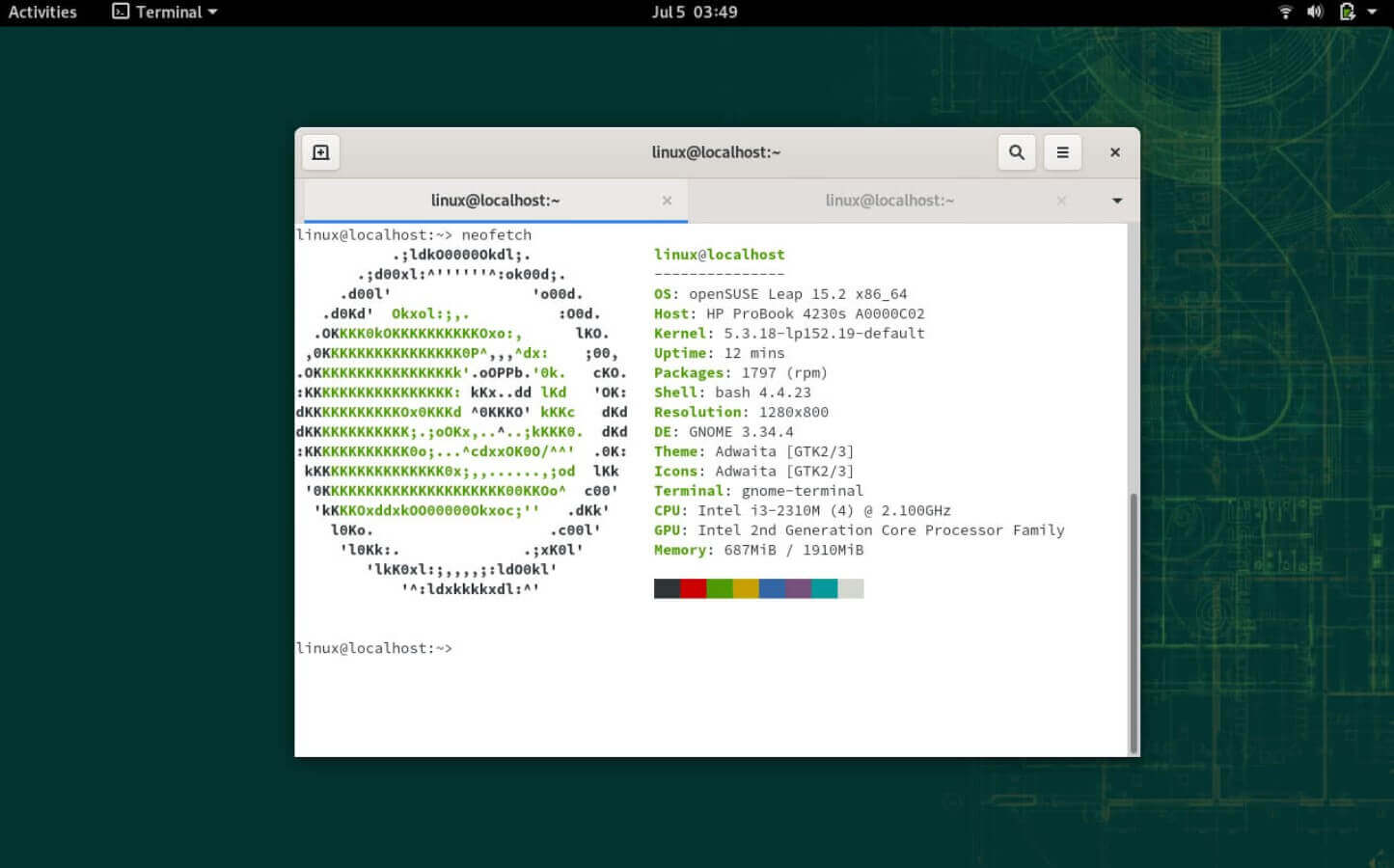 KDE is very similar in appearance to Microsoft Windows, and users of the latter will most likely feel very comfortable using this shell. As with Windows, they can open the KDE menu by clicking on the corresponding button in the panel in the lower-left corner. By default, KDE has one panel at the bottom of the screen. However, this can be changed by the user. The KDE shell is also considered one of the most resource-intensive desktop shells (although it is worth noting that recently Xfce has been trying its best to take away this “title” from KDE). On the other hand, KDE requires less RAM than GNOME 3. 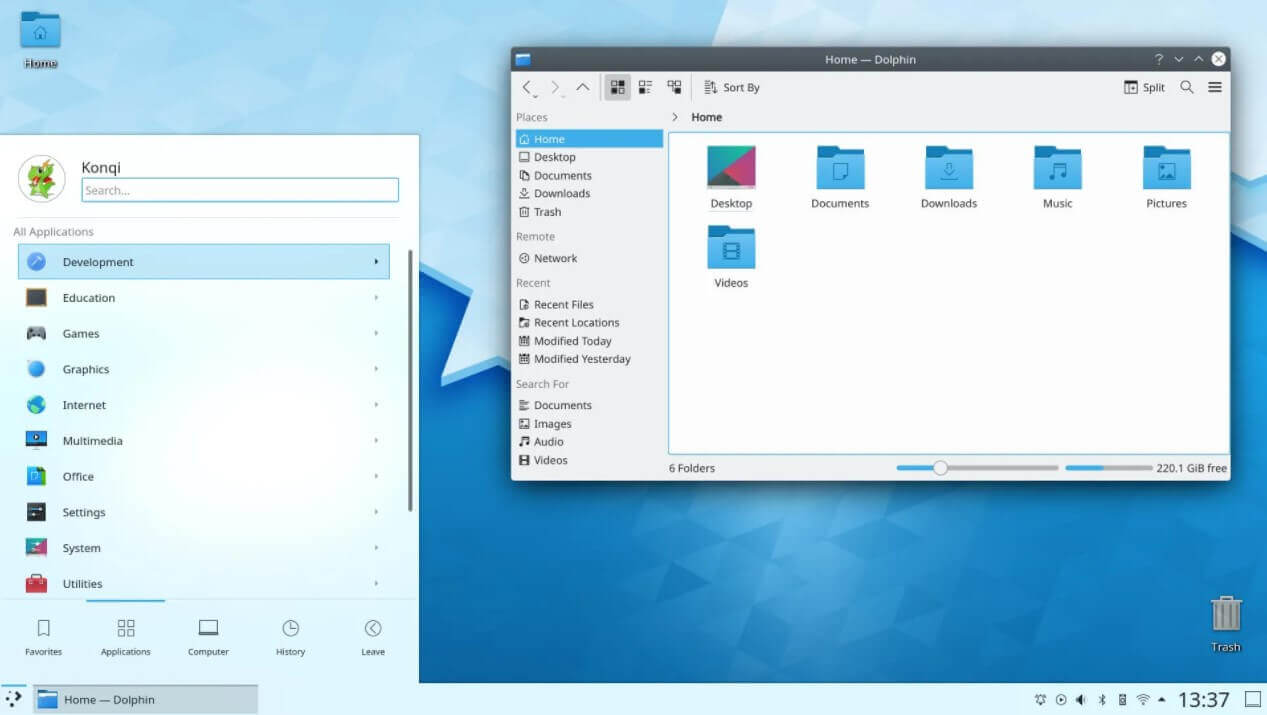 Like GNOME, KDE includes a large number of applications, many of which have names starting with the letter “K”. For example, Konqueror is the default web browser: 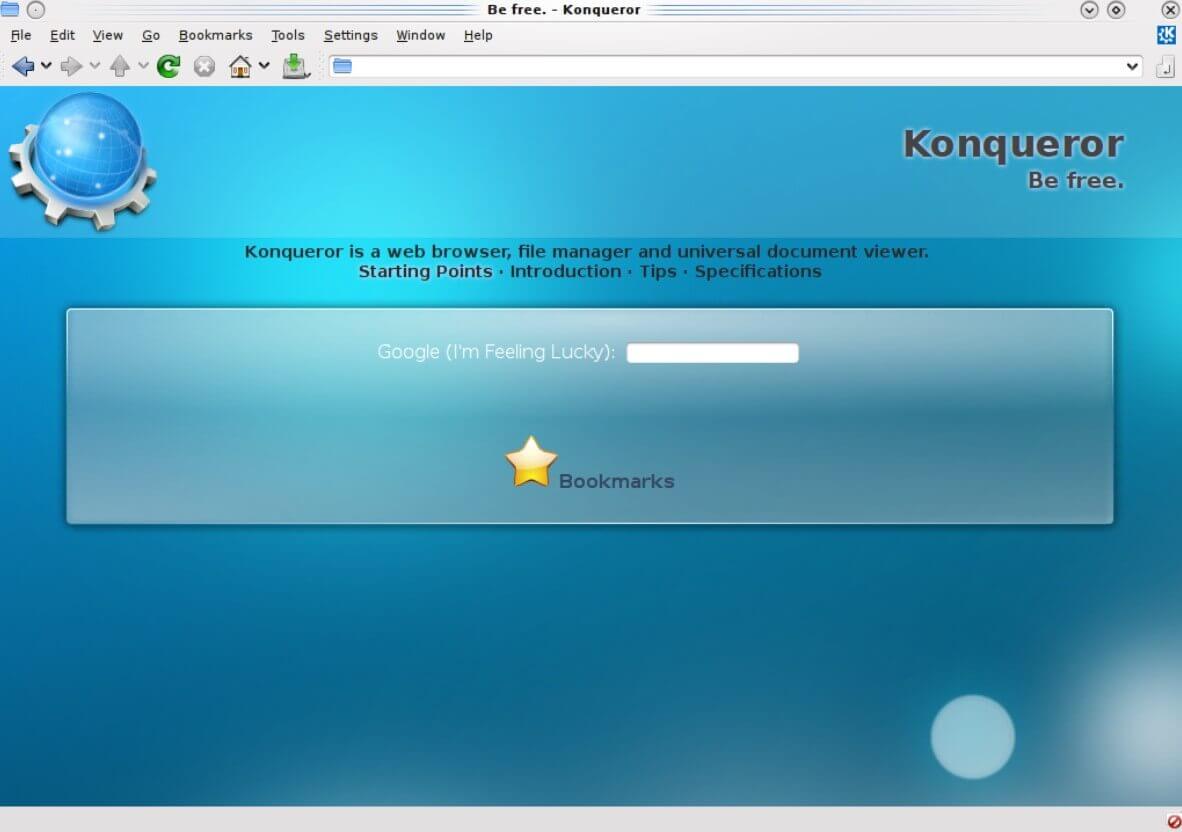 Dolphin is the default file manager: 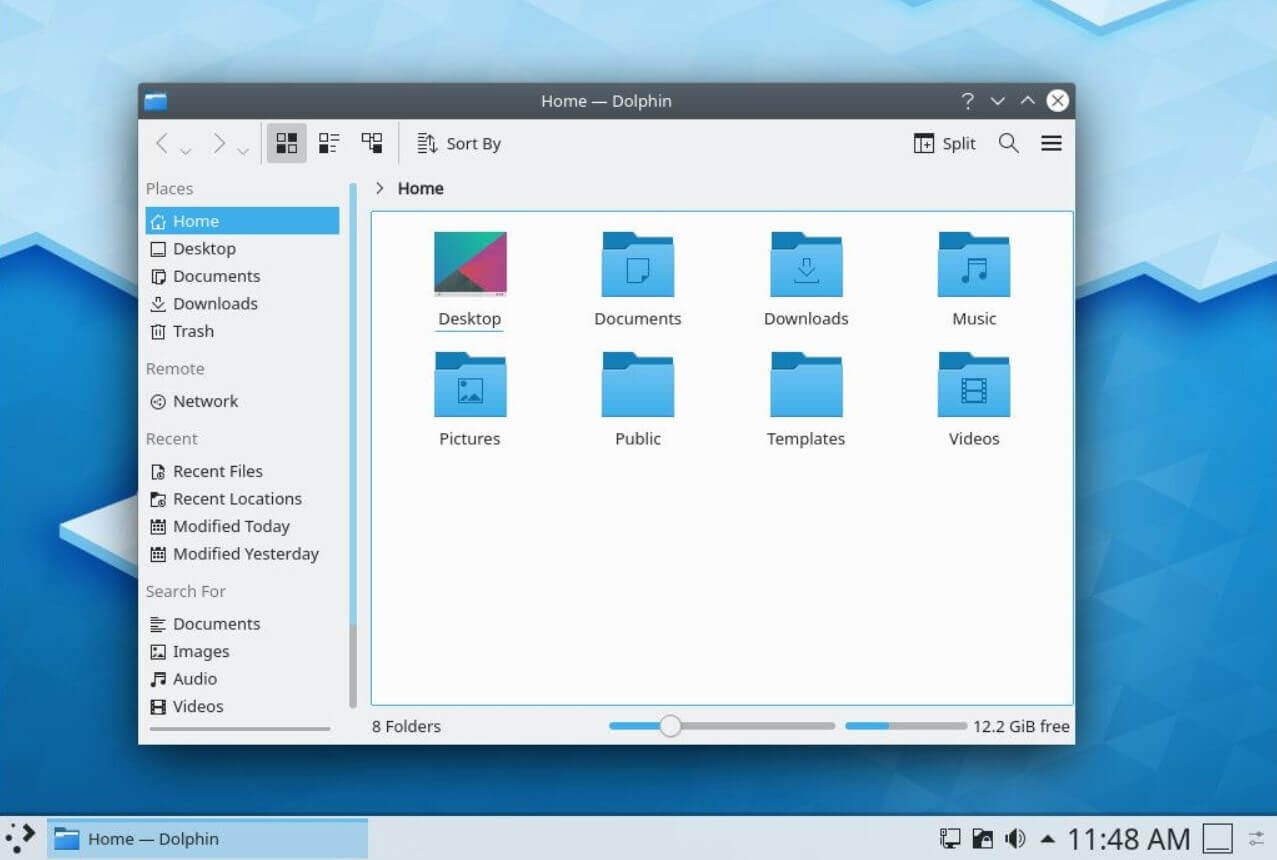 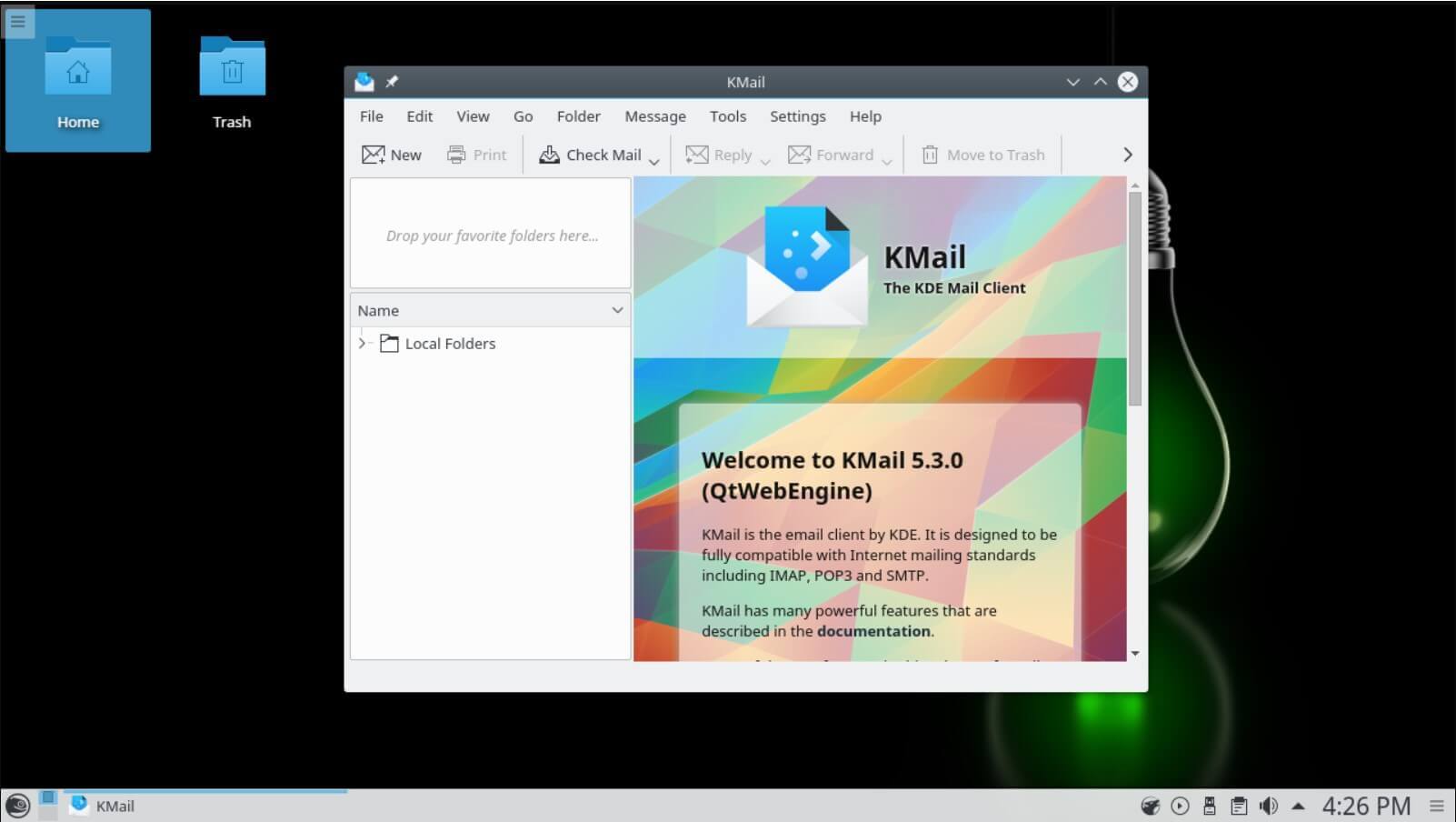 In addition, like GNOME applications, KDE applications can run in other desktop environments as well. You can click here to see a list of KDE applications. openSUSE, Manjaro, Mageia, PCLinuxOS, Kubuntu (the KDE version of Ubuntu), and Debian are just some of the major Linux distributions running KDE in their major releases. If we consider all the things, KDE is a great desktop shell that deserves attention.

Xfce, a less resource-intensive desktop environment than GNOME or KDE, is an excellent choice, even for older computers. In my opinion, Xfce provides a good balance between functionality and system resource consumption, while maintaining a beautiful desktop. The standard appearance of the Xfce shell is very similar to Mac OS X, with its dock panel located at the bottom of the desktop. Users can drag and drop their favorite apps to the bottom dock /panel in a similar way to how you can do it in Mac OS X. 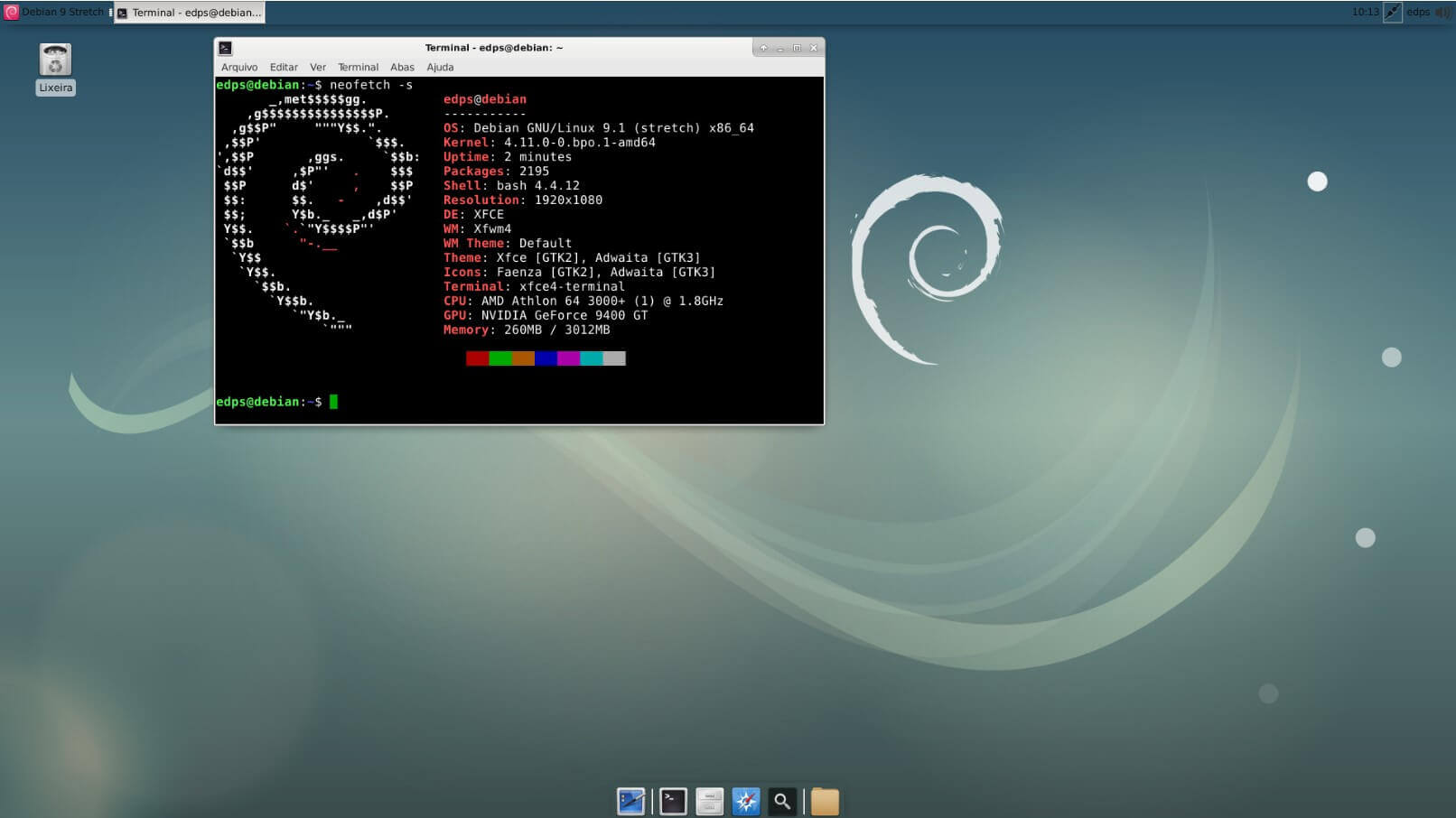 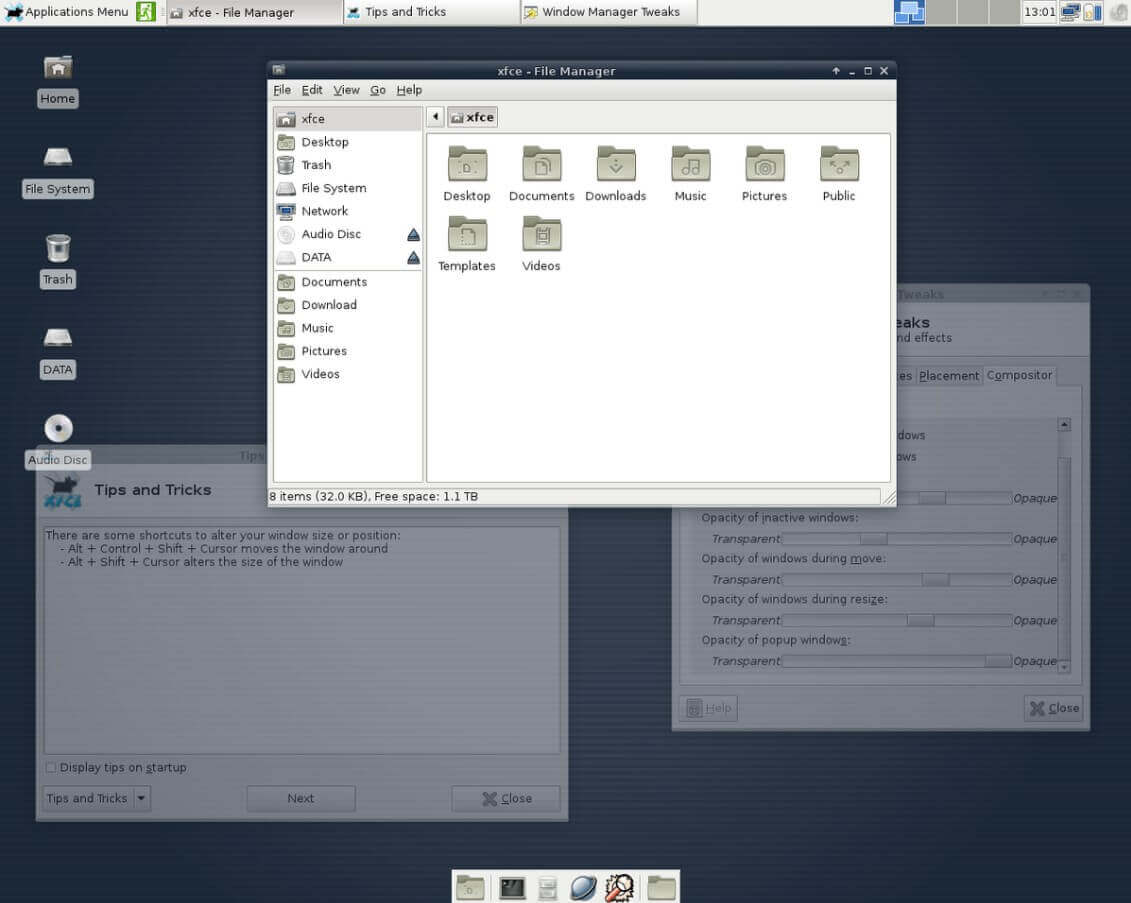 Xfce can also look like this (similar to GNOME 2.x): 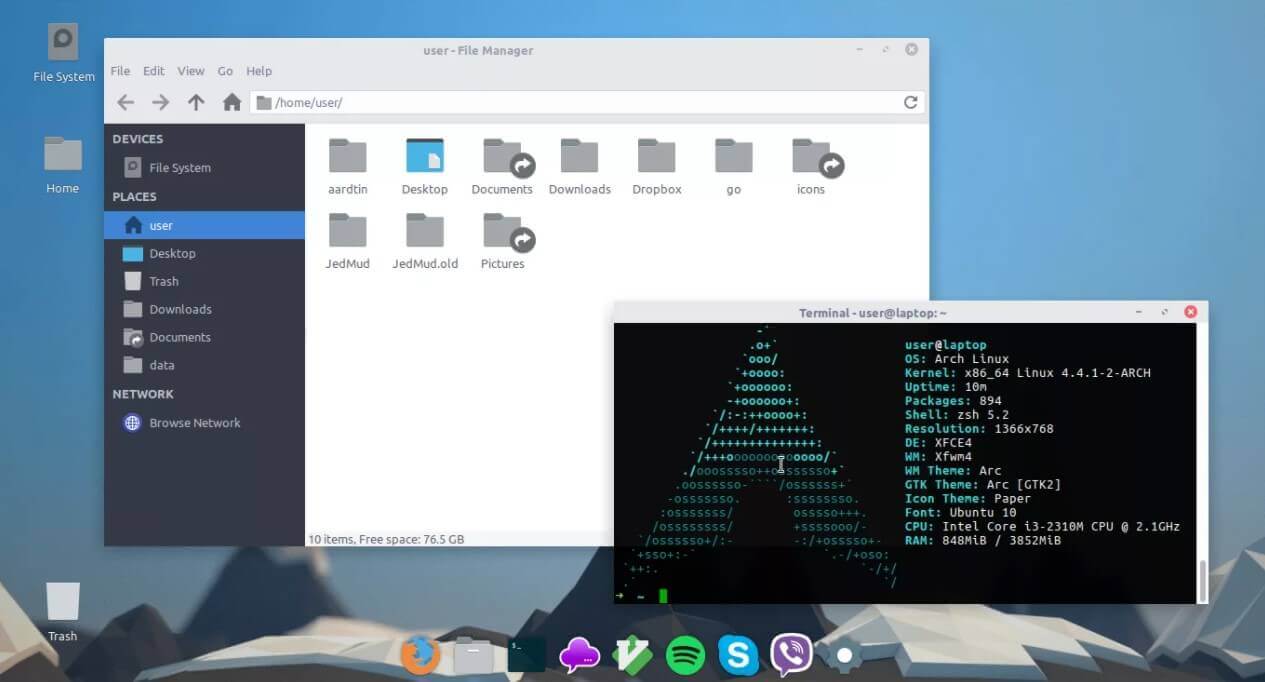 Just like GNOME 2. x and KDE, Xfce can be easily configured to look more like Windows, or in any other desired way. The Xfce shell can be found in distributions such as Xubuntu -a version of Ubuntu with Xfce, Linux Mint, and PCLinuxOS. Many other Linux distributions also offer Xfce versions.

Of the four main desktop environments on Linux, LXDE (Lightweight X11 Desktop Environment) is the least resource-intensive, making it an excellent choice for older computers. This shell will also work very quickly on new computers. Despite its super-efficiency, LXDE is still a pleasant and multifunctional desktop shell with simple and clear menus that are very easy to navigate. 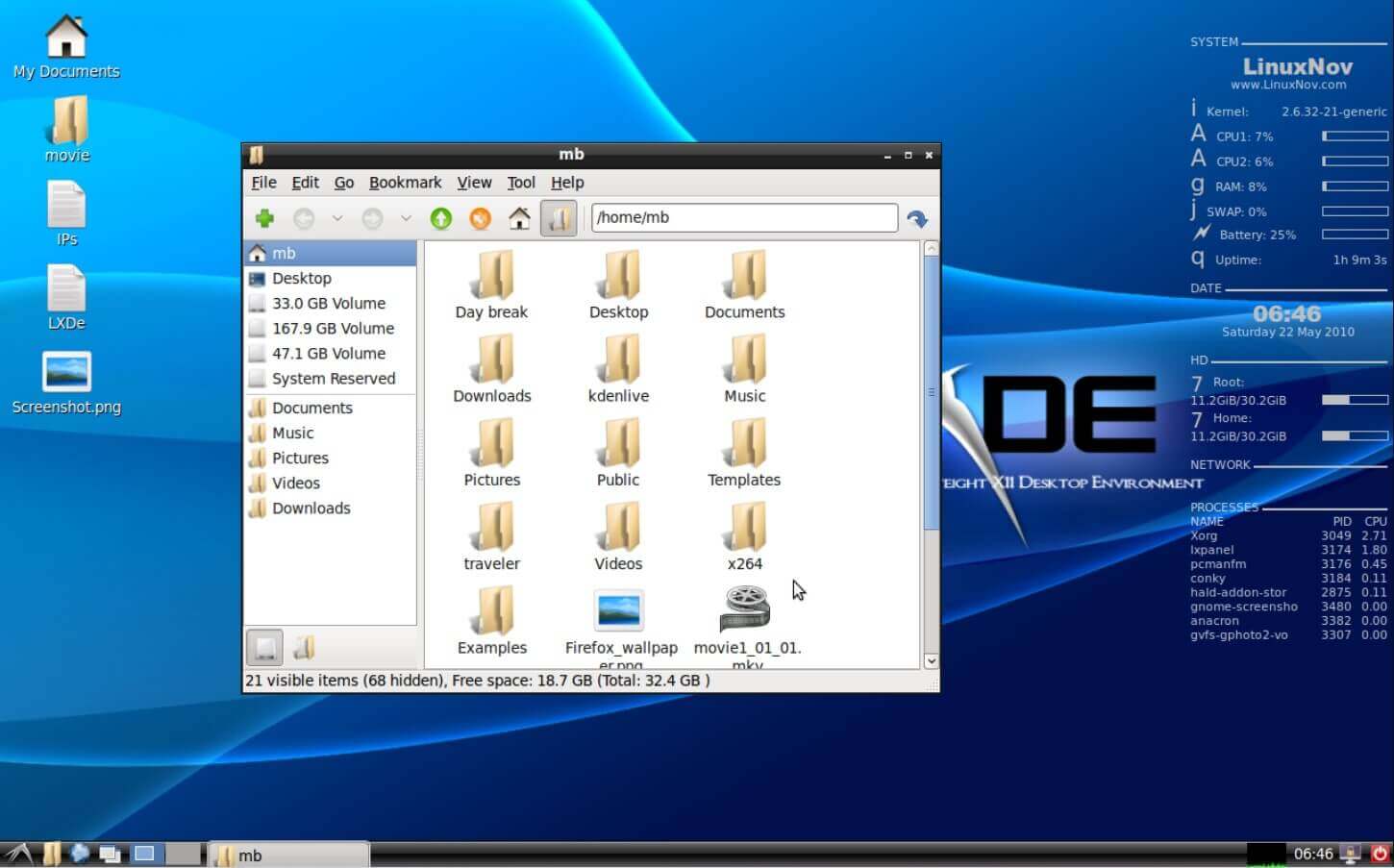 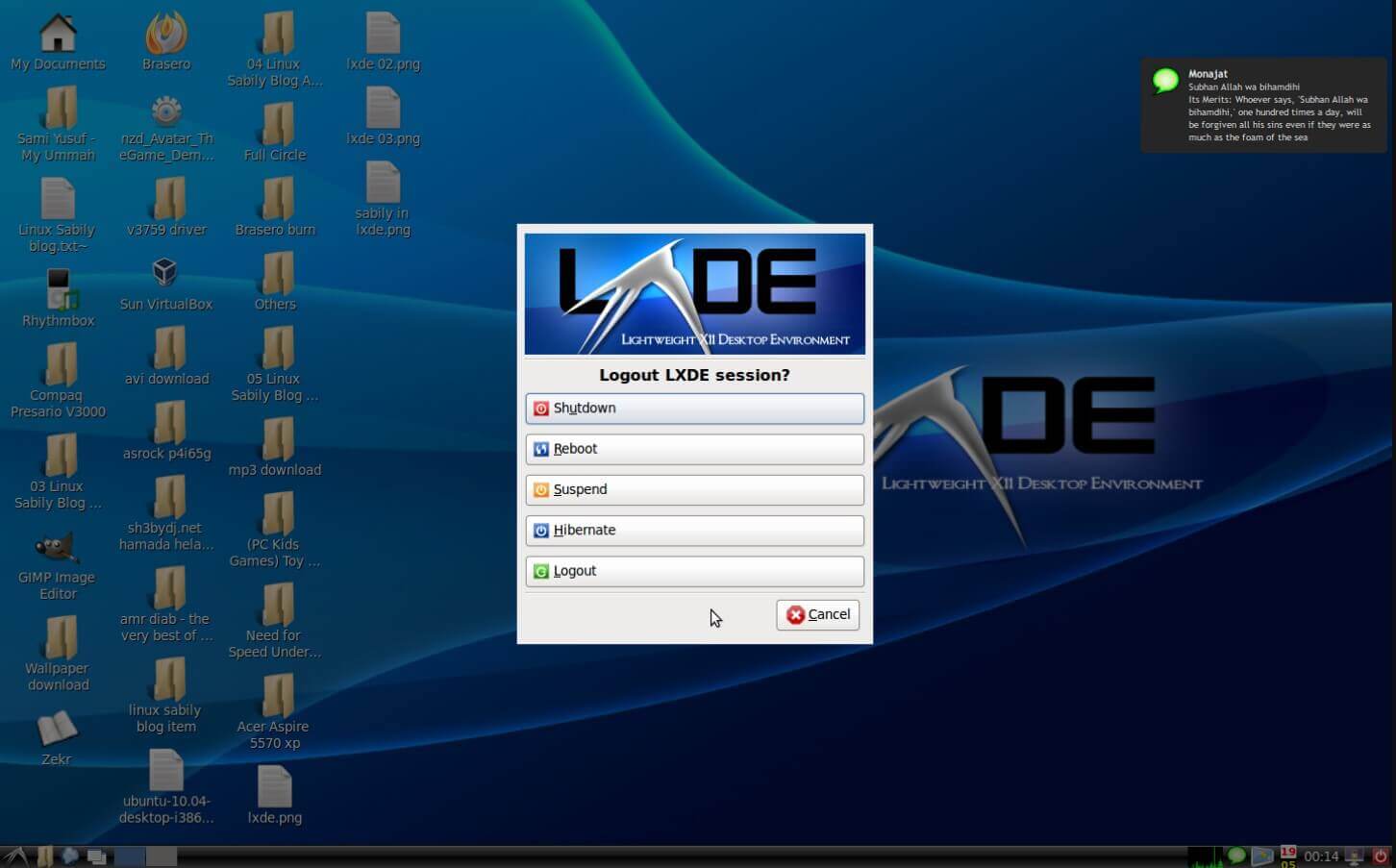 In its standard appearance, LXDE resembles older versions of Windows (for example, Windows 98 or 2000), with a single panel at the bottom of the desktop and a menu located on the left side of this panel. But like GNOME 2. x, KDE, and Xfce, it can be configured in various ways. Lubuntu (the LXDE version of Ubuntu) and Peppermint OS are popular distributions that use LXDE as the default desktop environment. Many other Linux distributions, such as PCLinuxOS, also offer versions with LXDE.

In addition, there are also such window managers as Fluxbox, IceWM, JWM, and Enlightenment.

One of the great things about Linux is that programs/applications created to run in any of the above desktop environments usually run in others as well. For example, the GNOME terminal can also run in KDE, Xfce, or LXDE, while KTerm also runs in GNOME, Xfce, and LXDE. It should be noted that many major Linux distributions offer their versions in several variants of desktop environments. You can even install any combination of GNOME, KDE, or Xfce at the same time. However, when installing multiple Linux desktop environments on the same computer, it is important to know that each shell will contain many unnecessary tools and applications (system utilities, games, etc.).

Another outstanding feature of Linux desktop environments is their flexibility, which gives users great opportunities to customize the desktop environment so that it looks unique, or to mimic the appearance of other operating systems, such as Windows and macOS.