Top 10 fastest fish in the world

Fastest fish: The fastest land animal on earth is the cheetah, which can reach speeds of over 100 km / h. But some sea creatures have no less speed of movement and skill.

These are the 10 fastest fish in the world 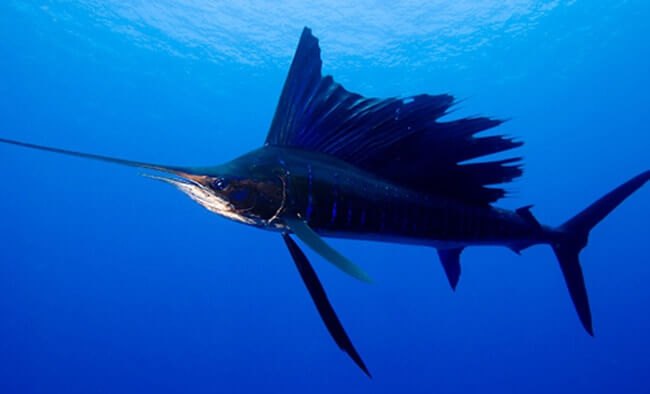 The Sailfish is the fastest fish in the world, capable of speeds over 100 km / h. During a series of tests carried out in one of the fishing camps, the Sailfish swam 91 m in 3 seconds, which is equivalent to a speed of 109 km / h. Unlike the overwhelming majority of bony fishes, sailfish and related species of the families of sailfish and swordfish effectively use turbulence, that is, water flows around the body not in layers, as in laminar movement, but forming rapid eddies that help them reduce water resistance.

The far protruding tapering of the upper and lower jaw allows for a turbulent effect at lower speeds. When sailing fast, the sail folds down and retracts into a special recess on the back. The long pelvic fins are also hidden. During sharp turns at high speed, the fins rise sharply. Sometimes Sailfish drift slowly near the surface of the water with the sail fully extended, protruding above the water. 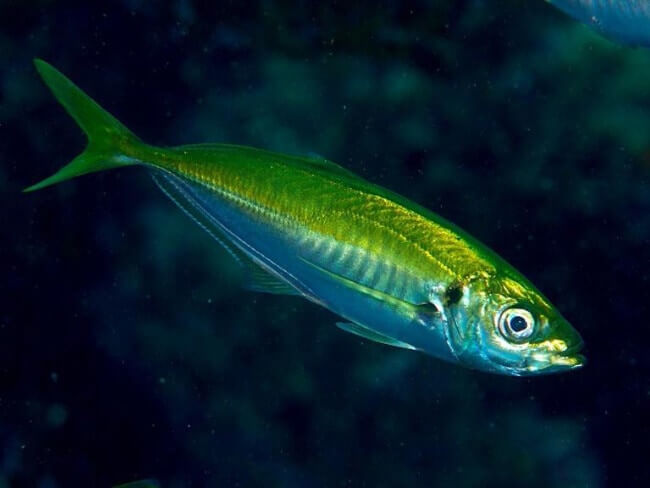 Jack mackerel is ranked second in the ranking of the fastest fish in the world. This sea fish is capable of developing an impressive swimming speed, which is 80 km / h. High speed plays a very important role for Jack mackerel because it is a fish, which helps it overtake its prey quickly.

It is a schooling fish that, moving in the water column, forms schools. Inhabits warm waters within the continental shelf, often close to the coast. Breeds in the warm season. It feeds on plankton and small fish, sometimes benthic invertebrates. 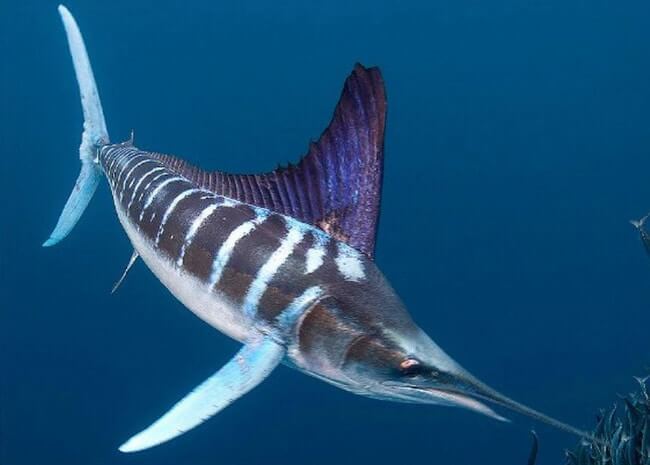 The striped marlin tanks the top three fastest fish in the world with a speed of up to 77 km / h in water. It got its name due to the well-pronounced transverse striping of the body. It is extremely rare in the equatorial zone and undertakes significant migrations. This fish moves to higher latitudes in the warm season and returns to warm-water areas of the range in winter. The predator feeds mainly on squid, fish, and crustaceans. 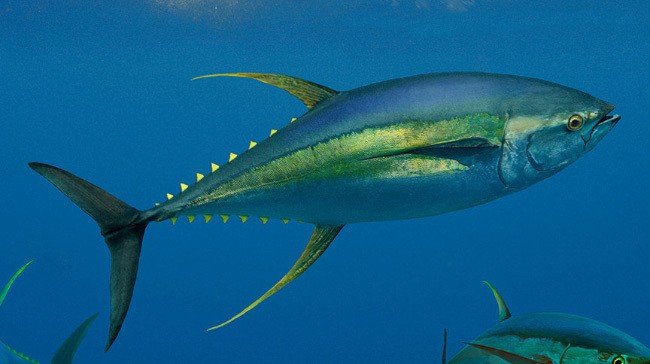 Yellowfin tuna is one of the fastest fish in the world with a movement speed of 75 km / h. This marine fish is distinguished primarily by its enormous size, it is capable of reaching two and a half meters and weighing 200 kilograms. It received its nickname for the corresponding color, its body is painted in gray-blue, and longitudinal lines of yellow-white pass along the back. There are 20 such lines in total. 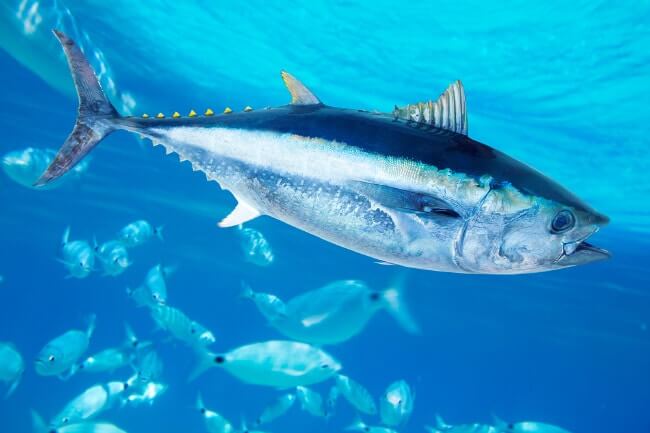 Pacific bluefin tuna with a swimming speed of 74 km / h is the fifth-fastest fish in the world. Pacific bluefin tuna are in constant motion. When they stop, they have difficulty breathing, since the gill covers open by the lateral movements of the body to the left and right. Water passes through an open mouth into the gill cavity only on movement. 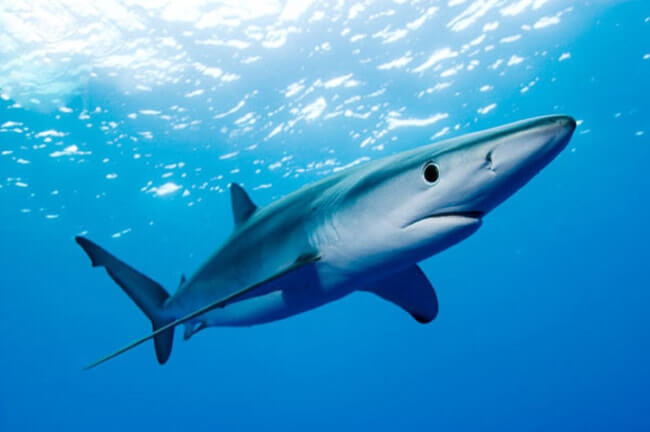 The blue shark is one of the fastest marine predators with a maximum speed of 69 km / h. Large predatory fish is found far from the coast, in the oceanic expanses, and at the very coastline. But it is more customary to see these fish in the open sea, as part of a convoy of ocean ships and liners, so the blue shark is considered mainly a pelagic fish. Perhaps this is one of the most numerous species among sharks of the Ocean World, along with such common predators as herring and salmon sharks. 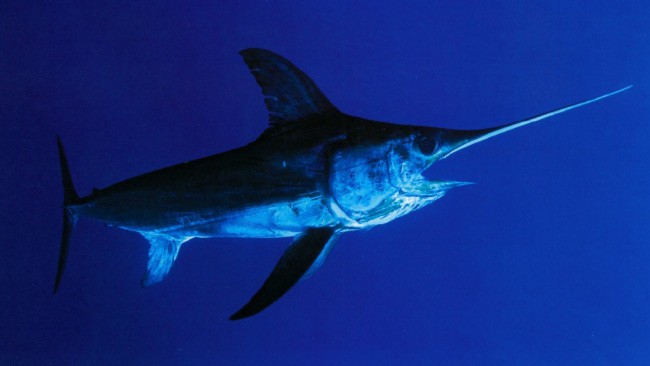 The swordfish is capable of moving in water at a speed of 65 km / h, which makes it one of the fastest fish in the world. It got its name from the highly elongated and flattened upper jaw, which has the shape of a sharpened sword and is up to a third of the length of the entire fish. The pelvic fins of the swordfish are absent, and the tail has a crescent shape, immediately showing the high-speed qualities of its owner.

As for the dimensions of the marine life, it can reach 4.55 m in length and 650 kg in weight. The swordfish is found in tropical and subtropical waters of all oceans, it is rarely found in the Black and Azov Seas, where it appears only in summer. It is fished mainly for the pelagic longline, and a valuable sport fishing trophy – trolling. 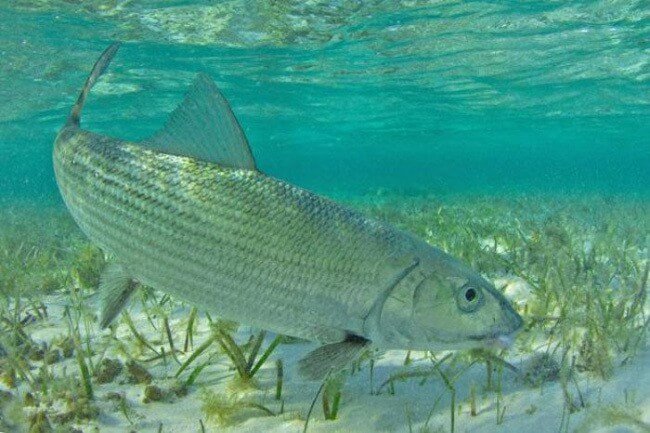 Bonefish ranks eighth in the list of the fastest fish in the world with a maximum speed of 60 km / h. It is a predatory fish that is found in the waters of tropical and subtropical seas. The size of a large fish can reach 1 meter in length and weigh up to 9 kilograms. Most of the marine life is used as a catch for sport fishing. 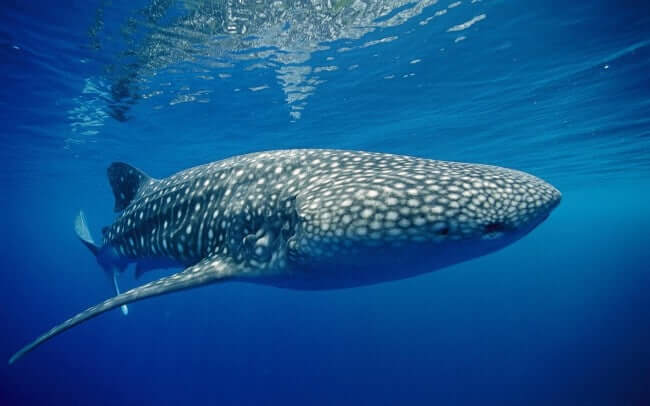 The tiger shark is one of the most dangerous and fastest marine life with a maximum speed of 53 km / h. It is also one of the largest modern sharks with a body length of up to 5 meters. Active predators and excellent swimmers, tiger sharks usually slowly patrol the territory, making subtle movements, but become quick and agile when they smell food. When attacking or fleeing, they can instantly develop high speed. Tiger sharks are found close to the coast, mainly in tropical and subtropical waters around the world. 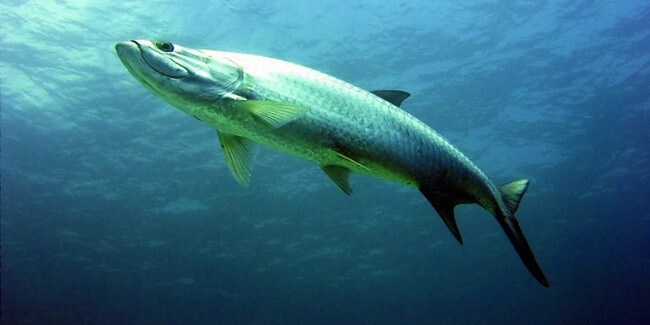 The Atlantic tarpon ends the ten fastest fish in the world, which is capable of speeds up to 50 km / h in water. Tarpon has a peculiar appearance and slightly resembles a large herring. In search of food, tarpon can travel great distances in a week. It feeds on various mollusks, crustaceans, fry of other fish species that prefer smaller habitats and walk closer to the surface of the water.