Top 10 most expensive pigeons in the world

Most expensive pigeons: All over the world, there are lovers of pigeons, these beautiful ornamental birds that delight with their plumage or the ability to fly quickly. Historians believe that the domestication of pigeons took place about 5 centuries ago. Since then, hundreds of breeds have been bred that differ from each other in habits and appearance. If initially they were bred for practical use, now many people are engaged in them “for the soul.”

For some, it is a great happiness to watch these snow-white birds flutter against the background of a bright blue sky. Experienced pigeon breeders try to replenish their collections constantly. Given the fact that there are about a thousand domestic pigeon breeds alone, they have a lot to choose from.

Real professionals can purchase and provide decent care for rare breeds. Not everyone can afford the most expensive pigeons in the world, but they will undoubtedly be the jewel of any collection. You will learn what is unique about them and what their price is from our article.

These are the top 10 most expensive pigeons in the world. 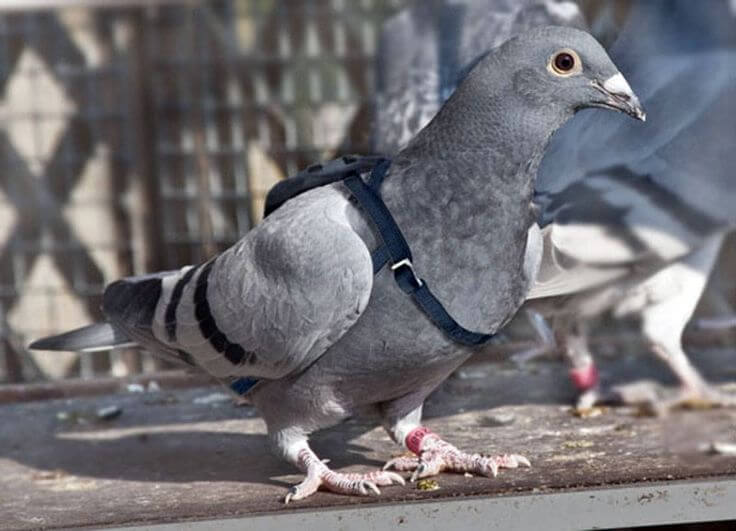 English Carrier pigeons have become one of the most expensive. In 1992, a Dutch breeder of elite carrier pigeons, Pieter Veenstra, set up an online auction. He sold several birds for $ 2.52 million through a well-known Belgian Internet site.

The most expensive pigeon was Dolce Vita, which translates as “Sweet Life.” He passed it to the Chinese businessman Hu Zhen Yu for 329 thousand dollars. It is the winner of various exhibitions and races. 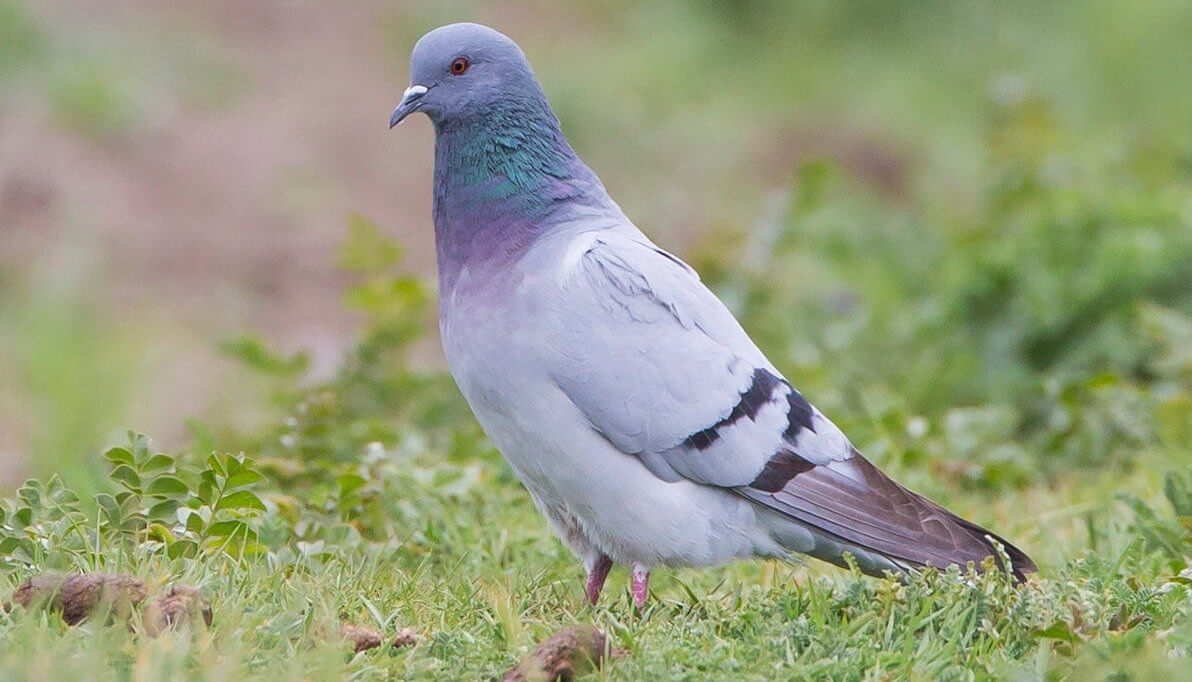 Armando’s racing pigeon became the best long-distance pigeon and the most expensive in the world.

They didn’t even dream of selling it for that kind of money. The owners expected 400-500 thousand, at best – 600 thousand. But two buyers from China began to bargain for this champion, and in just an hour, the bids increased from 532 thousand to 1.25 million euros or 1.4 million dollars. But Armando is worth the money because he has won the last three major races.

Interestingly, they bought it not for racing but for breeding fast pigeons. Armando is 5 years old, but racing pigeons produce offspring up to 10 years and can live up to 20 years. 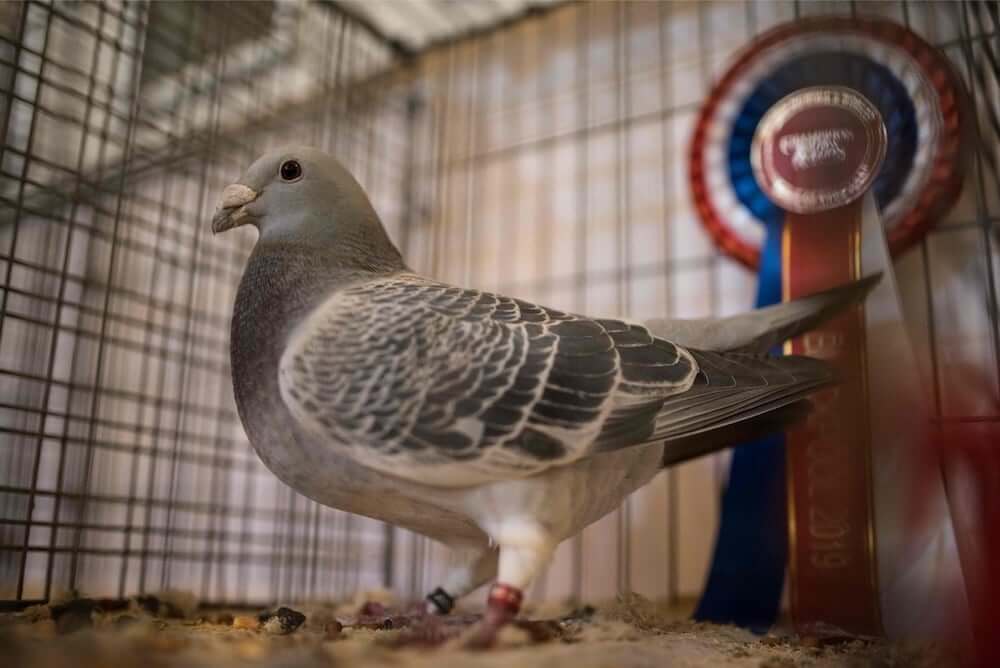 In 1992, a pigeon named “Invincible Spirit” sold for 7.6 million Taiwan dollars. It was a 4-year-old male who won an international competition in Barcelona. 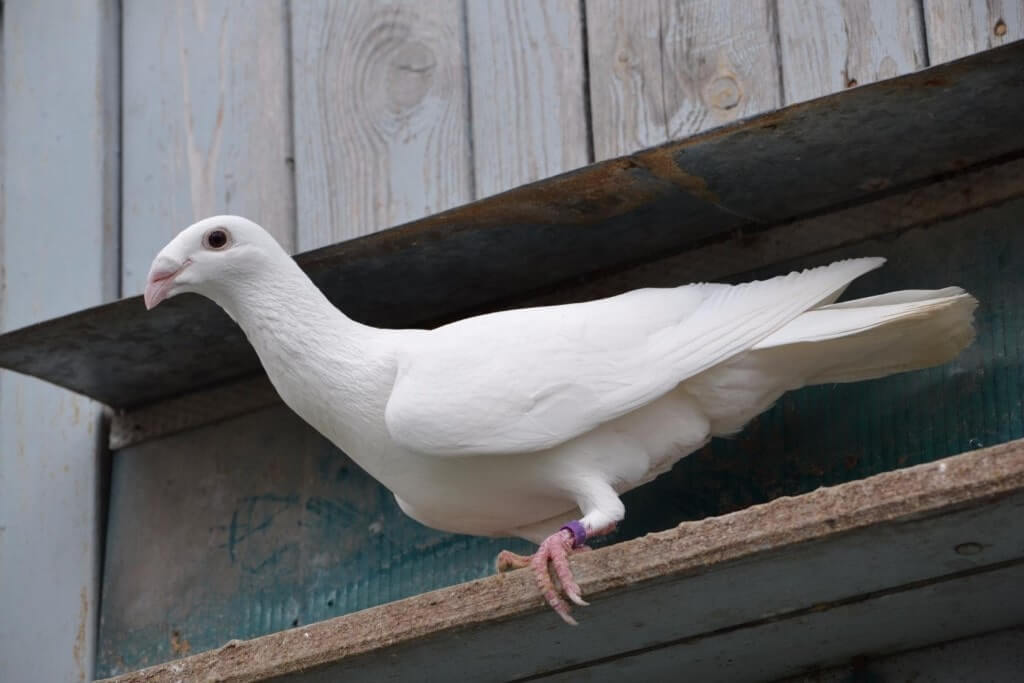 In 2013, a carrier pigeon grown in Belgium was sold for almost 400 thousand dollars; the exact price is 399.6 thousand. Leo Heremans was the breeder of the bird.

He passed this carrier pigeon to a Chinese businessman. It was only a year old and was named Bolt after champion Usain Bolt. He planned to use it for breeding pigeons because he has an excellent pedigree; at one time, they gave 237 thousand dollars to Bolt’s parents. 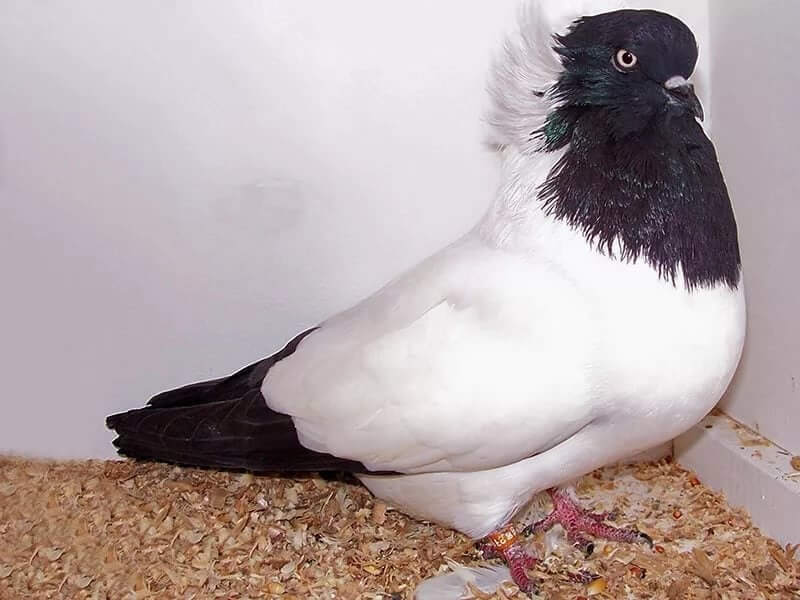 Another name is the Nun pigeon, and this is an ornamental pigeon breed that was bred in the UK. There is a hood made of feathers on the head, which is why his breed was called “Nun.” When flying, they open their wings, so a cross becomes visible, hence the second name.

The Nun pigeon was bred as a racing bird, so it needs constant training. Snow-white, but the head, apron and tail feathers are black. 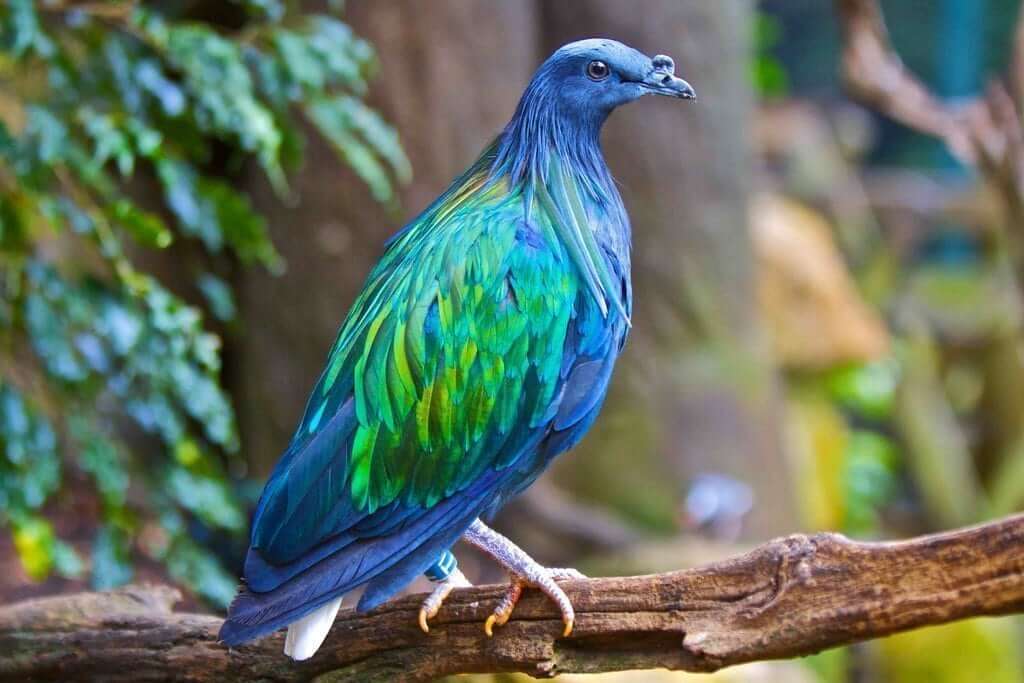 The only representative of maned pigeons is also named the Nicobar pigeon. It lives on the Andaman and Nicobar Islands and other small uninhabited islands where there are no predators in the jungle.

It is terrific, with a sort of mantle around its neck. This necklace is made of long feathers, shimmering with emerald and azure; under the bright sun’s rays, it shimmers with all the rainbow colors.

The maned pigeon is not very fond of flying. It grows to 40 cm in length and weighs 600 g. Most of the time, these birds spend on the ground; only because of the approaching danger can they fly up a tree. In search of seeds, fruits, nuts and berries, they can unite in flocks and fly from one island to another.

Even though this breed is not rare, recently, the natural habitat of birds has been destroyed, and the pigeons themselves are caught for sale or used for food. If this continues, this species may disappear. 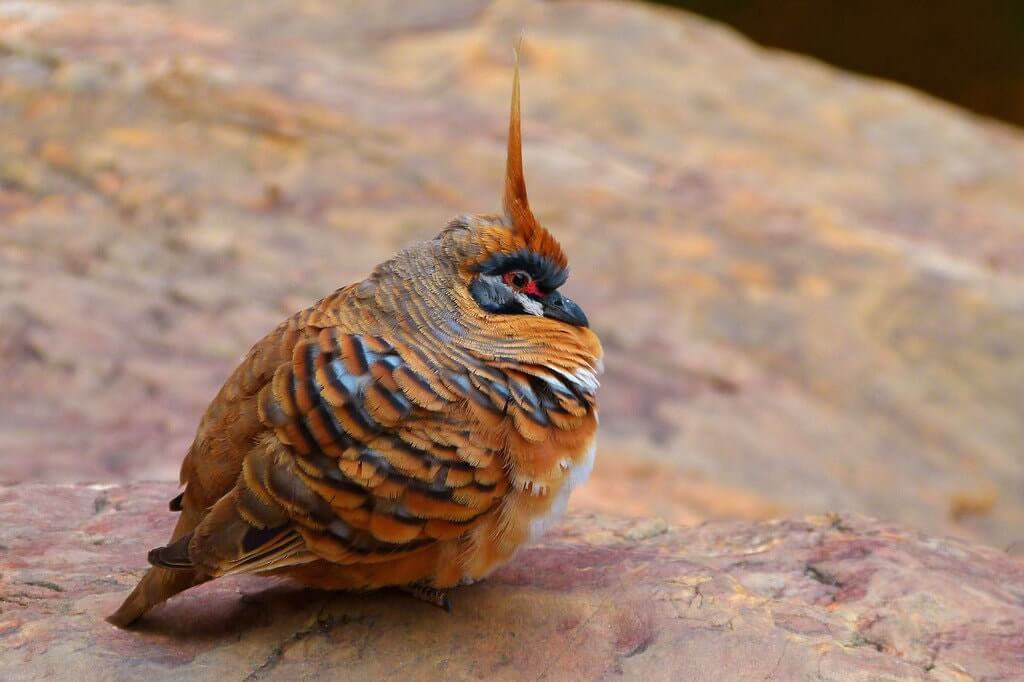 This breed lives in Australia, in the interior of the continent, in the aridest and desert regions. They have a magnificent brown plumage that almost merges with the surface of the stony desert.

The Spinifex pigeon is exceptionally hardy and searches for food in the hottest hours when other birds and animals hide from the destructive sun rays.

After the end of the rainy season, i.e., from September to November, they begin the mating period. The female builds a kind of nest, choosing a secluded place under a rock and enclosing it with grass. There she lays 2 eggs. They are incubated for 16-17 days by both parents. Chicks only take a week to learn how to feed and fly. 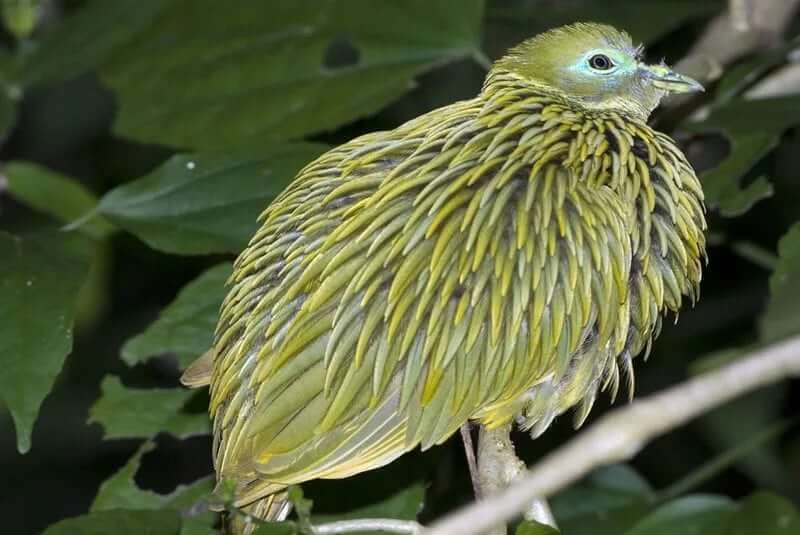 It lives in the tropical forests of the islands of Viti Levu, Gau, Oavlau, etc., belonging to the State of Fiji.

Golden fruit doves are small, only about 20 cm, but they’re stunning. The plumage is yellow with a hint of green. The beak and eye rings are bluish-green. It feeds on insects, berries and fruits. They usually lay 1 egg.

This pigeon breed prefers to lead a solitary lifestyle and rarely gets caught in the camera lens. 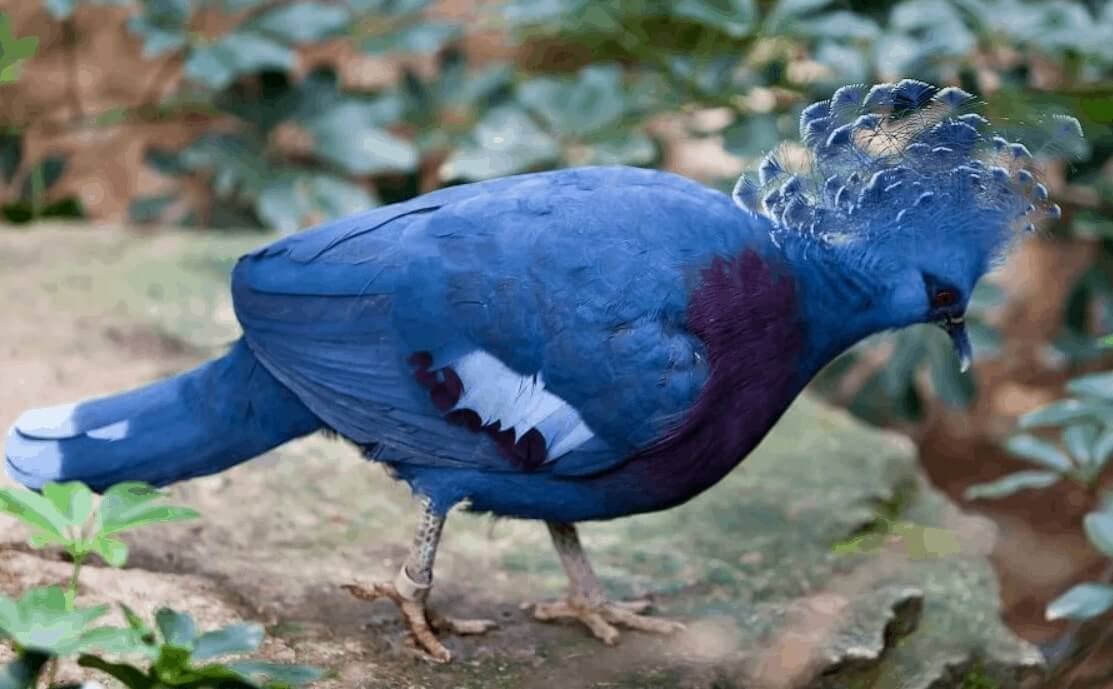 Another feature of it is its size: it weighs about 2.5 kg and grows up to 74 cm in length. It lives in New Guinea and on islands near it. It prefers to stay on the ground, choosing wetlands. If he feels danger, he flies up a tree. It eats seeds, fruits, berries, and young foliage.

The number of these magnificent birds is rapidly decreasing as their habitats are being destroyed, and the pigeons are being hunted. Therefore, this is one of the most expensive and rare breeds; it is almost impossible to find them. 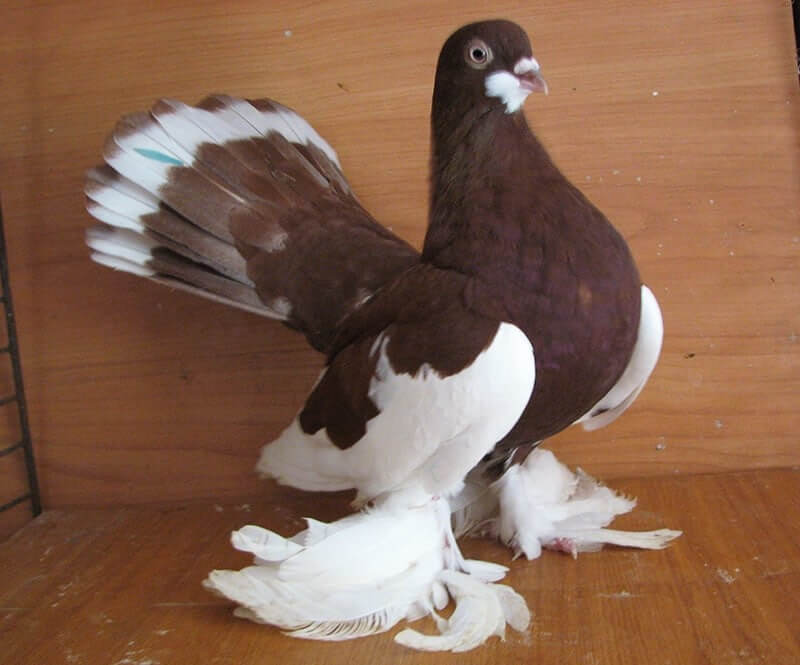 Russian breeders developed the breed in the early 20th century. To do this, they crossed lop-winged pigeons, red-breasted. People called them Volga Tumbler Pigeons because most of them formed in the cities of the Middle Volga.

These are small birds with a stately build, with a beautiful range of plumage. Their color is cherry, sometimes yellow, in combination with a white tint. A distinctive feature is a light strip on the tail, which runs across the tail (1-2 cm wide).

Volga Tumbler Pigeon can show its flight qualities if you deal with it correctly and regularly.

The advantage of this breed is calmness; they always behave with restraint and quiet. These pigeons are great parents.