Top 10 most expensive cat breeds in the world

Most expensive cat breeds: There is an opinion that the fashion for thoroughbred animals appeared relatively recently. It is fundamentally wrong. The desire to emphasize your special status with the help of an animal goes back centuries. But as for cats, they began to be associated with prestige only from the 50s of the twentieth century.

But an animal is not a fancy car or an expensive smartphone; it needs care and love. Unfortunately, the high cost of a kitten is not a guarantee of its happy life.

Before you get a cat, you need to think carefully. When choosing, you should focus not only on external data but also on character. Animals of different breeds differ in their behavior and attitude toward people.

In this article, we have compiled the top 10 most expensive cat breeds; look at their photos and see the prices for kittens. You can find out what distinctive features they have.

These are the top 10 most expensive cat breeds in the world. 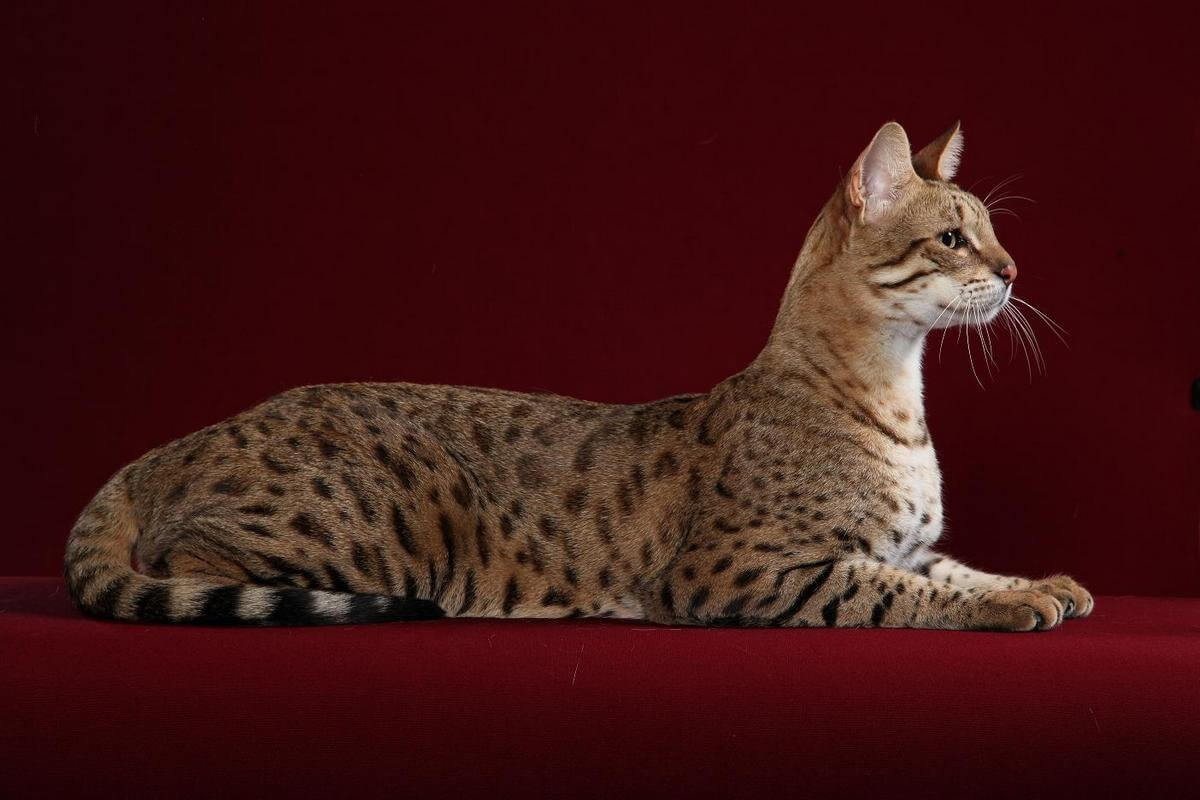 An exotic, expensive, and a rare breed. Ashera‘s ancestors are the Asian leopard, the African serval, and the ordinary domestic cat. It has some similarities with the savanna but is still separated into a separate breed.

The animal’s size is impressive; its weight ranges from 12 to 14 kilograms. They seem somewhat out of proportion, and the rear end looks slightly heavy. The coat is short and mottled.

Personality: Animals have high intelligence; they are intelligent and quick-witted. Ashera cats are friendly and will make friends with all family members and other pets.

They like to play and go for walks. You can only take them outside on a leash. However, this is a good reason to demonstrate your stable financial position. 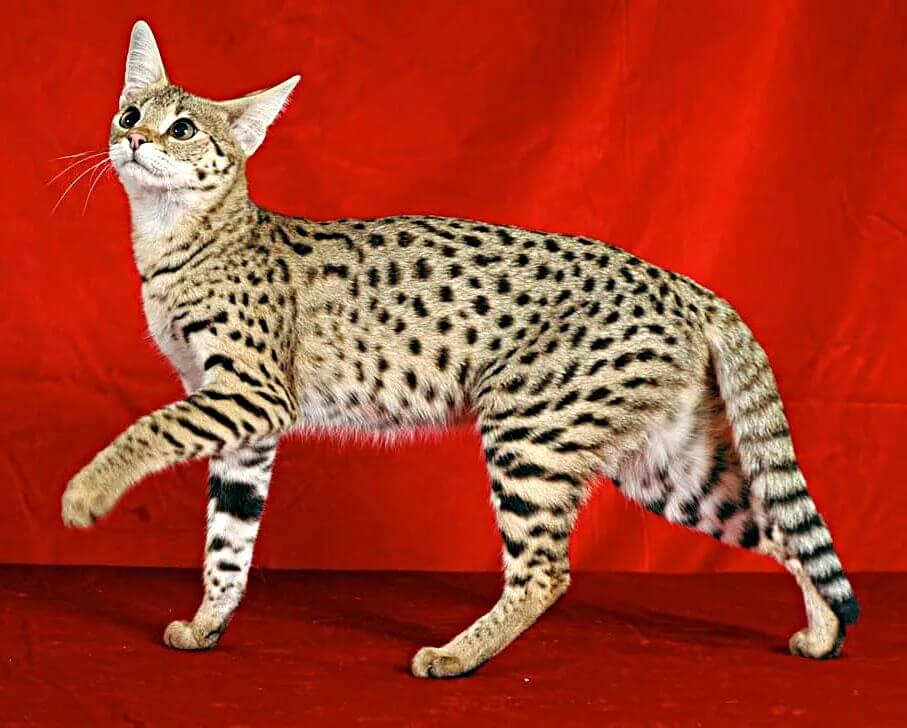 Hybrid of a serval and a domestic cat. The weight of the animal can reach 15 kilograms. Main characteristics: long graceful body, short tail, huge ears. Another feature of the savannah cat is its mottled color, which is the same as that of its wild counterparts.

Personality: A calm, non-aggressive animal. Savannas are usually loyal to their owners. Quickly find a common language with other pets. They are playful, but this is more of a disadvantage than a virtue. During the game, a person can be bitten or scratched, and furniture, walls, and even the ceiling can be damaged. Savannas jump very high, up to 3 meters in height. 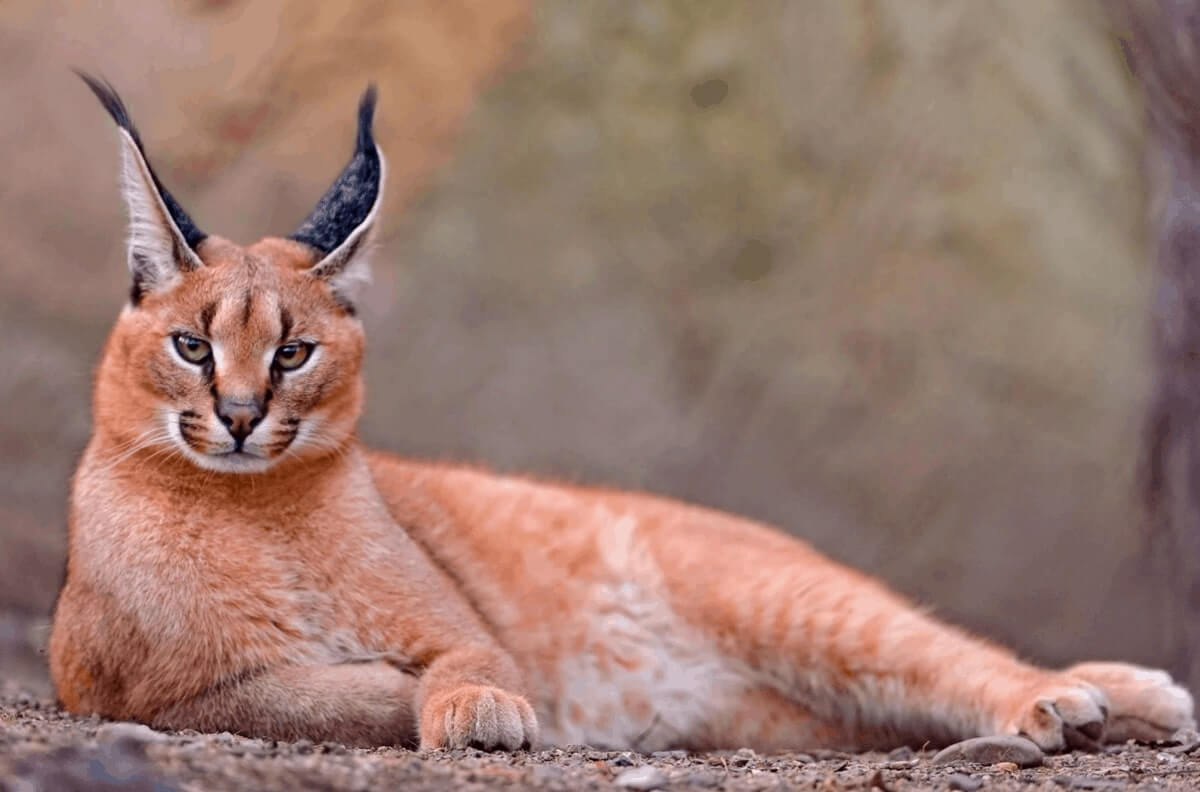 This expensive animal is more like a lynx than a cat. This wild animal, a predator, will require a lot of money, time, and effort to maintain.

You can take risks if you are not afraid of difficulties and have the right amount. In this case, you will not be the only fan of the exotic. There are many examples of “friendly relations” between a Caracal and a human.

Caracals are large animals, the average weight is up to 19, and the maximum is up to 25 kilograms. They have a bright and exciting appearance. The lower part of the body is lighter, the ears are black, and there may be dark spots on the muzzle.

Personality: It all depends on your upbringing. Do not forget that this predator can show aggression at any time. Domesticated caracals do not pose a threat to humans. 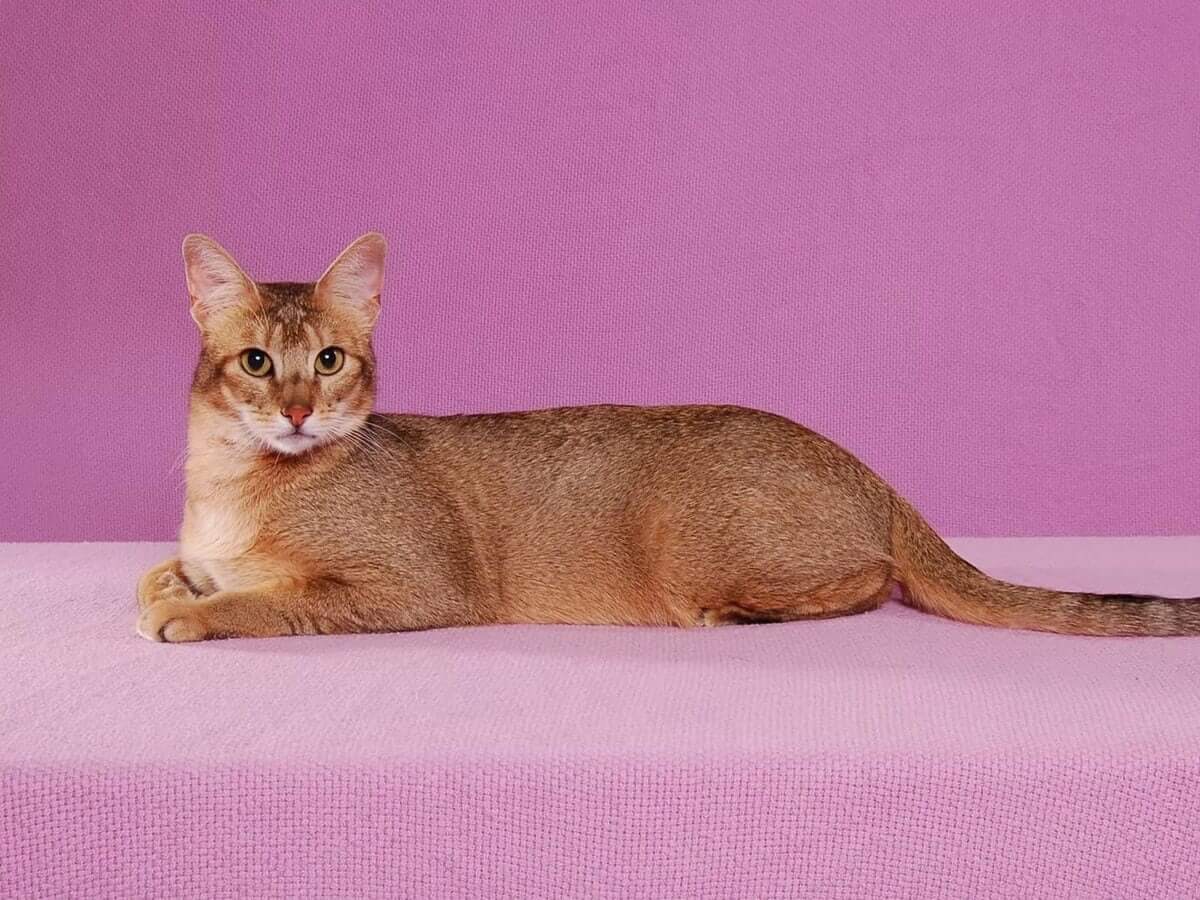 Chausie is a descendant of a wild reed cat crossed with a domestic shorthair. They are much larger than ordinary cats; their weight can reach 15 kilograms, which is not the limit. In appearance, they also differ from the usual pets: a predatory profile and large ears with black tassels.

The real pride of the Chausie is its wool, which is short and shiny. The color combines up to 5 shades. Chausie cats are an exquisite and unconventional breed worth the money asked for them.

Personality: Usually, animals are friendly and love their owners, but they do not tolerate when they are forced to caress and try to take them in their arms. Rebellious, independent, hyperactive, fearless, not everyone can cope with such a cat.

Numerous problems in upbringing will easily be solved by themselves if the owner does not try to subdue the animal but tries to find an approach to it. 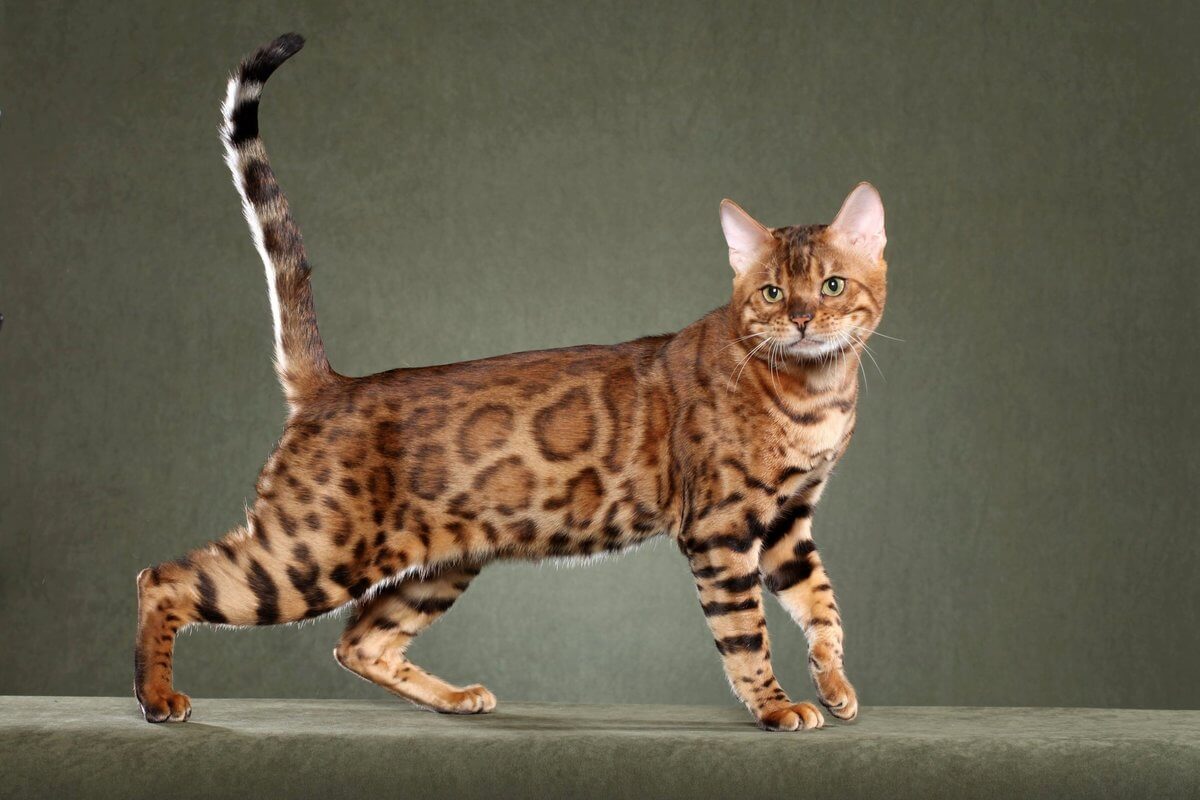 There is a lot of controversy about this breed. Some scientists do not see the difference between safari and Bengal. The safari’s ancestors are Geoffroy’s cat, Siamese, and Bengal breeds.

In large animals, the maximum weight is 13 kilograms, although there were cases when males reached the mark of 17 kilograms. Almond-shaped eyes, thick tail, and dense coat of mottled color-these are the main signs of a safari cat.

Personality: The animal gives the impression of being ferocious and harsh, but do not be afraid; in fact, they are friendly and pleasant. Attached to the owner, but easily tolerate loneliness.

Safaris are playful and have strong hunting instincts, so they should not be kept together with rats, mice, birds, and other small animals. 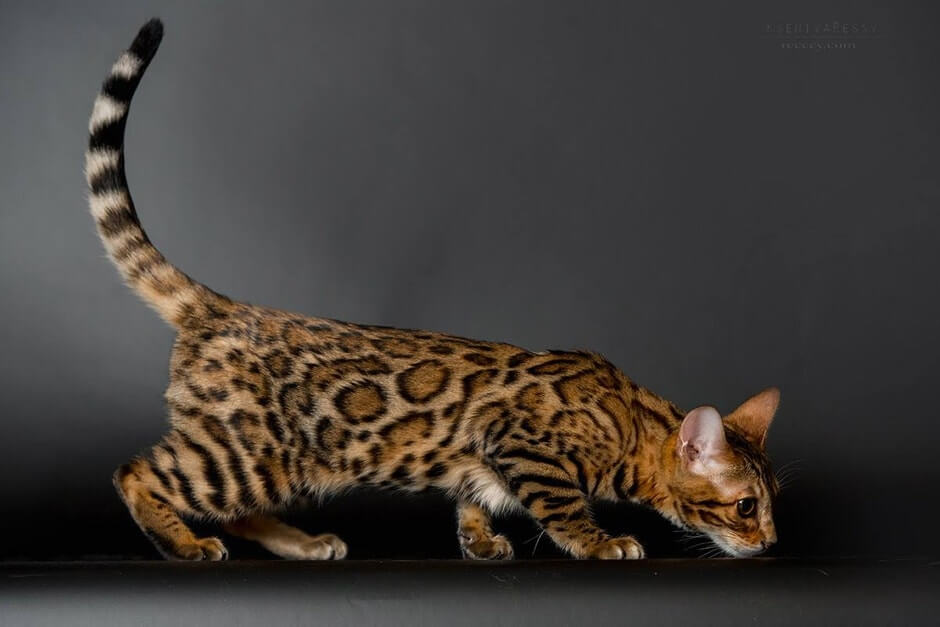 The Bengal breed was artificially bred by crossing the Far Eastern wild and ordinary domestic cat.

Quite large animals, the weight of a Bengal cat can reach 7 kilograms, and females are significantly smaller than males in size. Bengal is easy to distinguish among representatives of other breeds. These animals have a spectacular spotted color.

Personality: Bengal cats are friendly animals. They do not show aggression; on the contrary, they demand love and affection. They treat children well and are playful.

A distinctive feature of this breed is its love of water. They love to swim, frolic, and play with the trickles from the tap or shower. 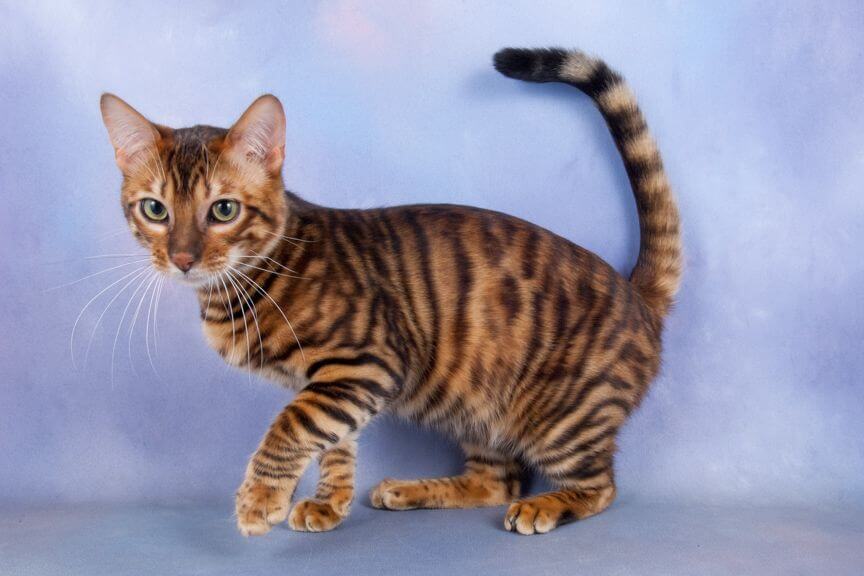 The selective selection bred the breed; the ancestors are Bengal cats. Purebred Toygers are very expensive. In Russia, you can count on your fingers the kennels that breed cats of this breed.

The name of the breed translates as “toy tiger.” Broad-boned, muscular bodies are very similar to wild cats. The maximum weight is 7.5 kilograms. A distinctive feature is stripes, which can be classic rings and various bends or broken lines.

Personality: A Toyger is a companion cat. They have a docile disposition; they are characterized by intelligence. The animals are friendly, love to play and spend time with family members, and adore children. They get along well with other animals. 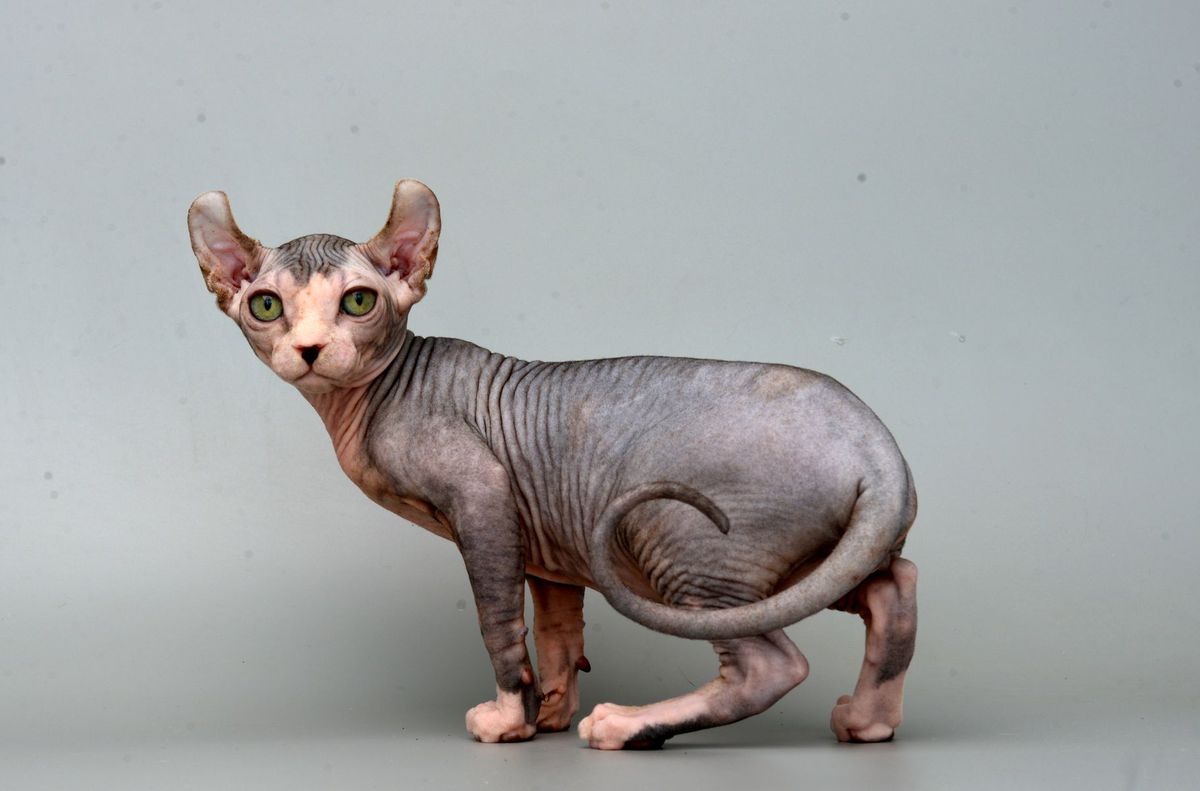 The breed with a beautiful name was bred in 2006 by crossing the sphinx and curl. Elves are ideal for people who suffer from allergies to wool.

The maximum weight is 7 kilograms; the body is muscular with well-developed muscles. As you already understand, they have no wool. Many folds form on the body.

A characteristic feature is the vast ears, broad at the base and rounded to the top. They are cute animals, but not everyone will like this cat because of its unusual appearance.

Personality: One of the most good-natured breeds. The cat is very attached to the owner, loves children, and quickly finds a common language with other pets. Elves are wise; they will not be naughty and like watching their pets. 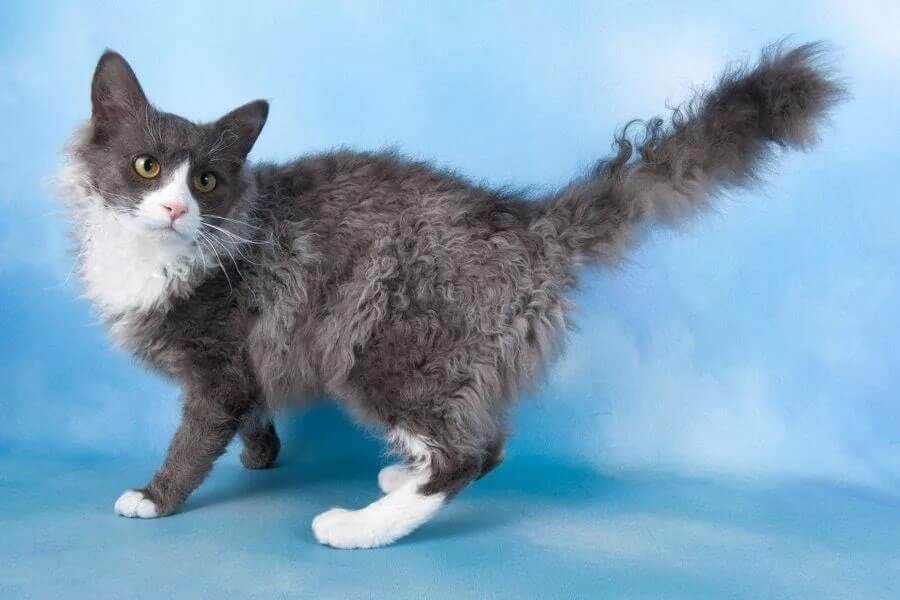 This breed, like many others, was formed by chance. A female breeder discovered that one kitten is different from its siblings. It was curly-haired. After a while, she took part in a cat show. An unusual cat interested the judges. She gave the breed the name LaPerm.

Animals of this breed have small bodies; their weight usually does not exceed 4 kilograms. A distinctive feature of la ferme is wool that resembles mohair; it can be either short or long.

Personality: Cats are curious and don’t like being alone. Communication with the owner is essential for them. These are pretty kind animals; they will not conflict with other pets. They are loyal to children, but they will not tolerate familiarity. 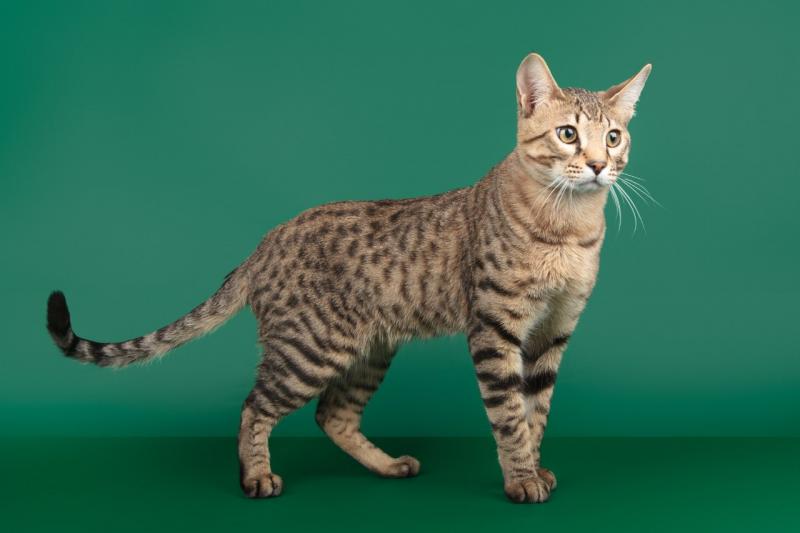 American Karen Sauzman bred Serengeti by crossing Bengal and Oriental breeds. These are large animals (up to 15 kilograms) with developed muscles and long tails. The coat is short and mottled. In appearance, representatives of this breed resemble a serval.

Personality: Stubborn and persistent animals that will never recover from their goal. If the cat decides to play with a ball, you can hide it as much as you want, and it will still find it.

The animal is firmly attached to the person. The feeling of fear is unfamiliar to the Serengeti; they can attack even a large dog. These animals love walking, so they tend to run away.