Top 10 most beautiful parrot species in the world

Most beautiful parrot: Among pets, parrots are especially distinguished. They delight us not only with their singing or talking but also with their beautiful plumage. Bright and colorful, some parrots can cheer up, even if the windows are autumn gray or snowy in winter. Unpretentious, cheerful, never discouraged birds have become best friends for many; they wake up in the morning with their beautiful singing and cheer up during the day by tweeting or chatting.

If you want to buy a pet for yourself or choose a friend for your parents or friends, you should look closely at these birds.

The most beautiful parrots in the world are not demanding on the conditions of detention, they cause much less trouble than a cat or dog, but they delight the eye with their magnificent plumage and bright colors.

These are the top 10 most beautiful parrot species in the world. 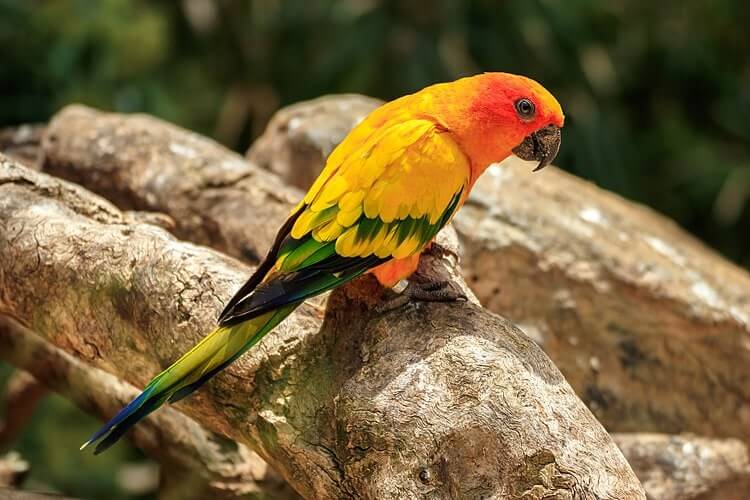 This parrot species is native to Brazil. In terms of plumage beauty, it is one of the leaders because of its bright and attractive coloring; representatives of this species are called “flying flowers.”

The body length of the Jandaya parakeet does not exceed 30 cm, and the color is emerald green; only small areas contain other colors. They have a large and wide beak of pink-beige color.

It feeds on seeds and berries, often causing damage to corn plantations, which is why people began to kill them. In natural conditions, the parrot lives no more than 15 years, but in captivity, it lives up to 30.

A pair of parrots can be very attached; they stay together until death and are rarely separated. 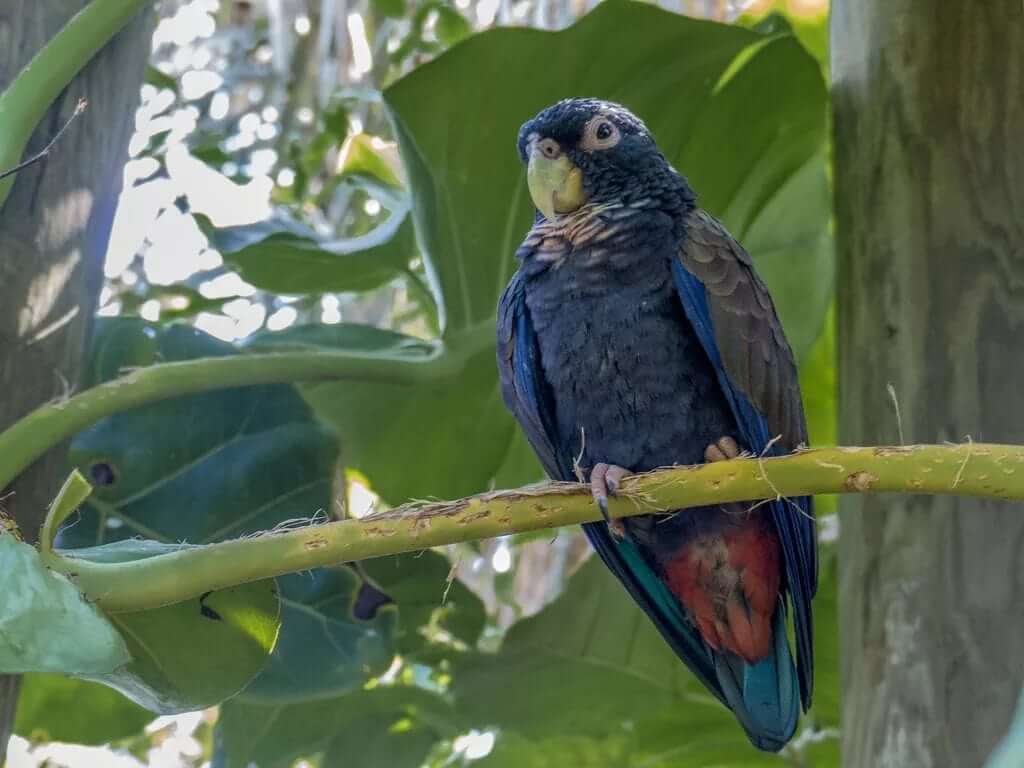 You can find this feathered bird in Peru, Ecuador, and Colombia. It is medium size, about 27 cm. The feathers are colored black with a blue tint, the back and shoulders are dark brown, and the tail and flight feathers are bluish.

In addition to their memorable, beautiful appearance, they are distinguished by high intelligence and curiosity. The bronze-winged parrot can become very attached to the owner and protect the owner from the rest of the family. 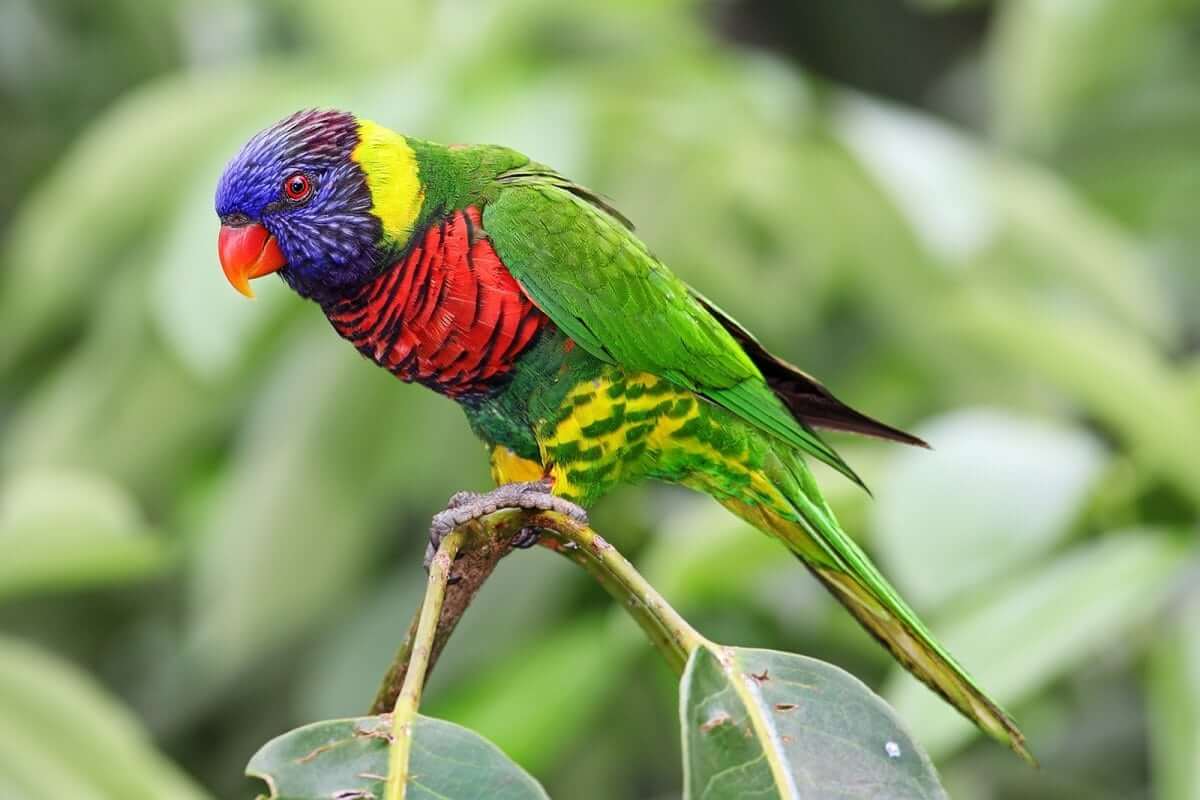 And this parrot can be found in Australia, as well as in New Guinea, in the rainforests. They feed on fruits, seeds, berries, and flowers.

Coconut lorikeet is extremely beautiful. It is small in size, up to 30 cm. It stands out for its color: purple head, dark blue belly and neck, bright red, orange breast on the sides, back, and wings-dark green. In their coloring, almost all the colors of the rainbow are present. 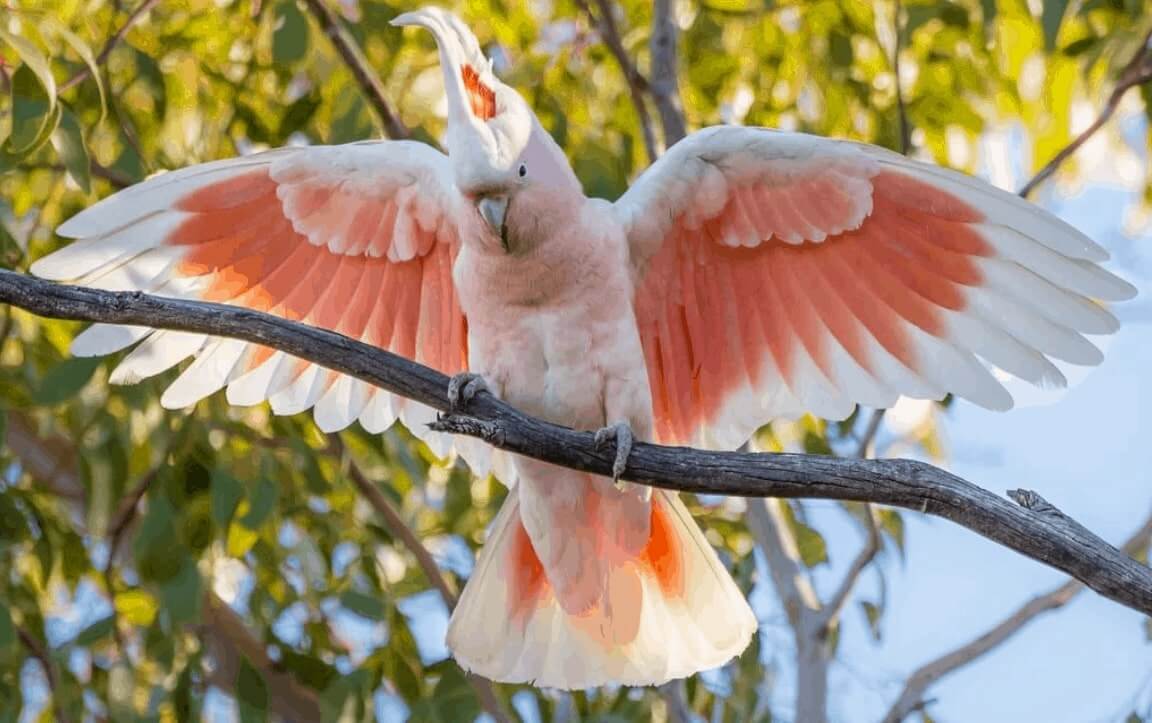 You can meet this bird in Australia. It is medium in size, up to 40 cm in length, and very elegant and beautiful. Major Mitchell’s cockatoo is pinkish-white, has white wings, and its cheeks, breast, and belly are a beautiful shade of pink. These parrots have a magnificent long (up to 18 cm) crest, white, with bright red and yellow feathers.

They have shrill and loud voices. They live in the wild for up to 50 years, in captivity longer. Friendly by nature, they quickly become attached to the owner.

Major Mitchell’s cockatoo needs constant communication. They will scream or pluck their feathers if they are not given at least 2 hours a day. Being attached to one person can show aggression toward other people. 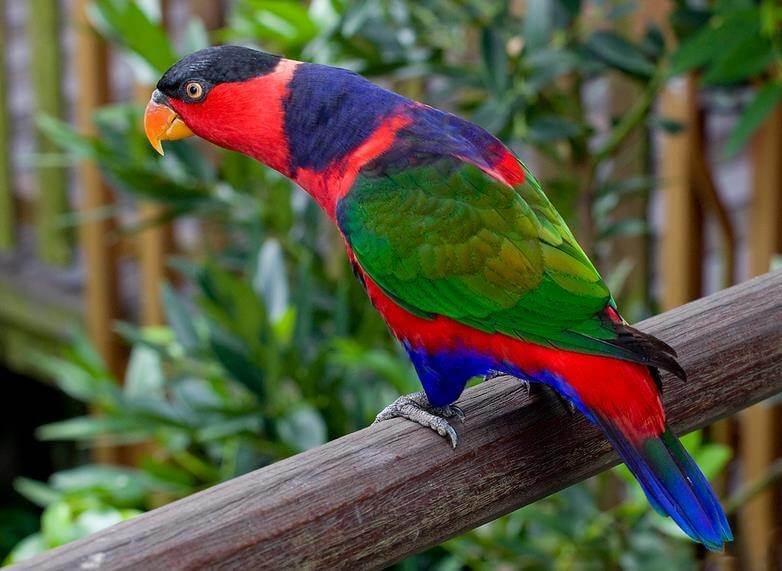 Loriini is one of the most beautiful and colorful birds, whose feathers are painted in all the colors of the rainbow. They are native to Australia and New Guinea. They feed on pollen and nectar from about 5 thousand varieties of flowers, and they also love juicy, soft fruits.

In Dutch, “Loriini” means “clown.” And this name was not chosen by chance: they have multi-colored plumage and a cheerful, playful character. This color scheme protects them from predators because birds spend much time among flowers.

Loriinies are small birds from 18 to 40 cm. In total, there are 62 species of Loric parrots. They are very bright and beautiful; some have up to 6-7 different colors in their plumage.

But despite their attractive appearance, few people keep Loriini at home because they have a shrill, raspy voices. In addition, liquid droppings are the norm for this type of bird, and they spray everywhere. Those who decide to have a Loriini will have to get used to daily cleaning. 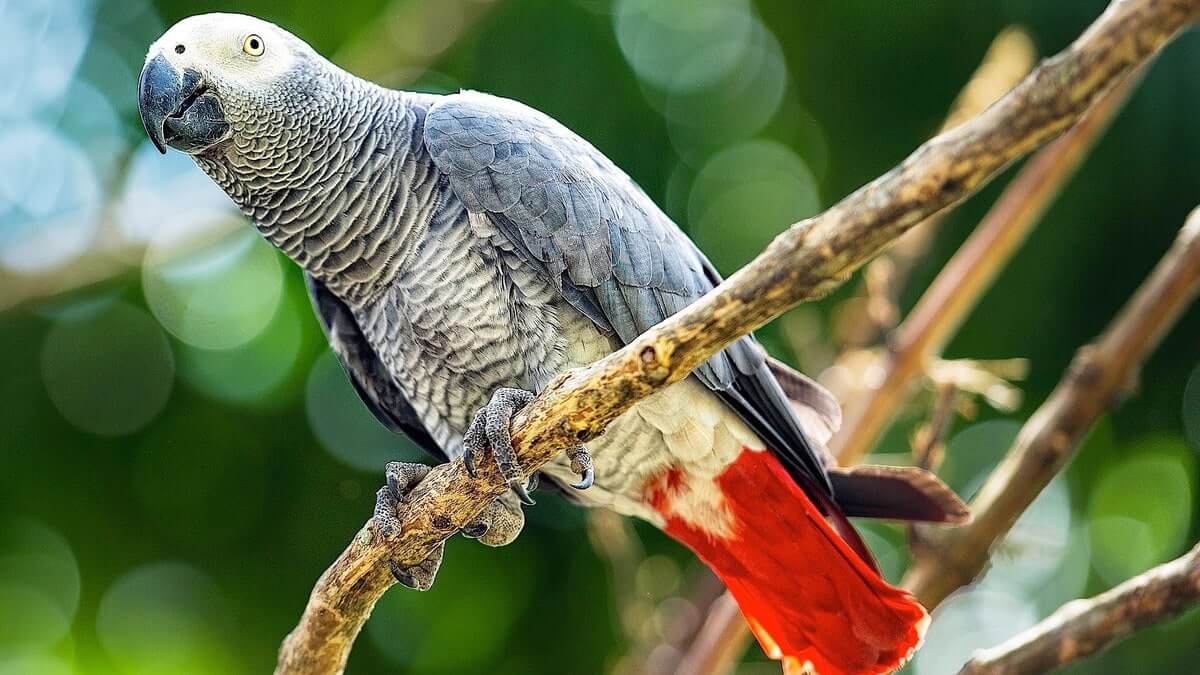 These birds are native to Africa. Grey parrots can not be called bright and unforgettable. The primary plumage color is ash-gray, the edges of the feathers are slightly lighter, and the tail is purplish-red. Their beak is black and curved, and their legs are also gray.

But these are the most talented parrots, memorizing 1,500 words each. They start training at the age of 7-9 months. In addition to human speech, Grey parrots reproduce other sounds: they can scream, squeal, click their beak, and often repeat all the sounds they constantly hear: the sound of a phone, an alarm clock, and the cries of wild birds.

If the Grey parrot is not maintained correctly, it has some psychological trauma or parasitic diseases; it may suffer from self-plucking. 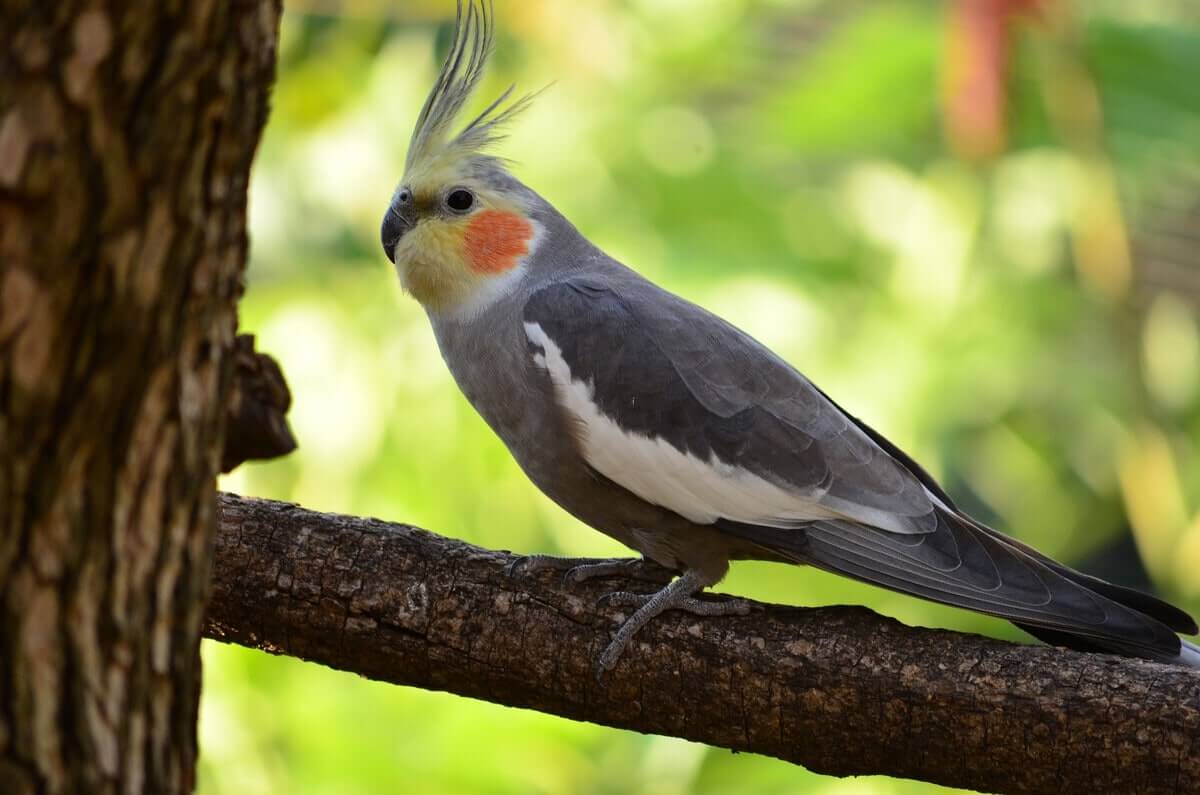 Parrots are native to Australia. Another name for it is the weiro. The Cockatiel is a very bright and exciting bird. It is medium-sized, with a small crest on its head that rises and falls depending on the bird’s mood.

The male Cockatiel is gray, but the crest and head are yellow, with bright orange spots on the cheeks. The female is less noticeable: pale gray, the head and crest it-yellowish-gray, and pale spots of brown color on the cheeks.

These birds are easy to tame and can learn some words and melodies. Males imitate well the voices of street birds: nightingales and chickadees. The Cockatiel is a very kind, naive, and open bird that is not characterized by aggression. 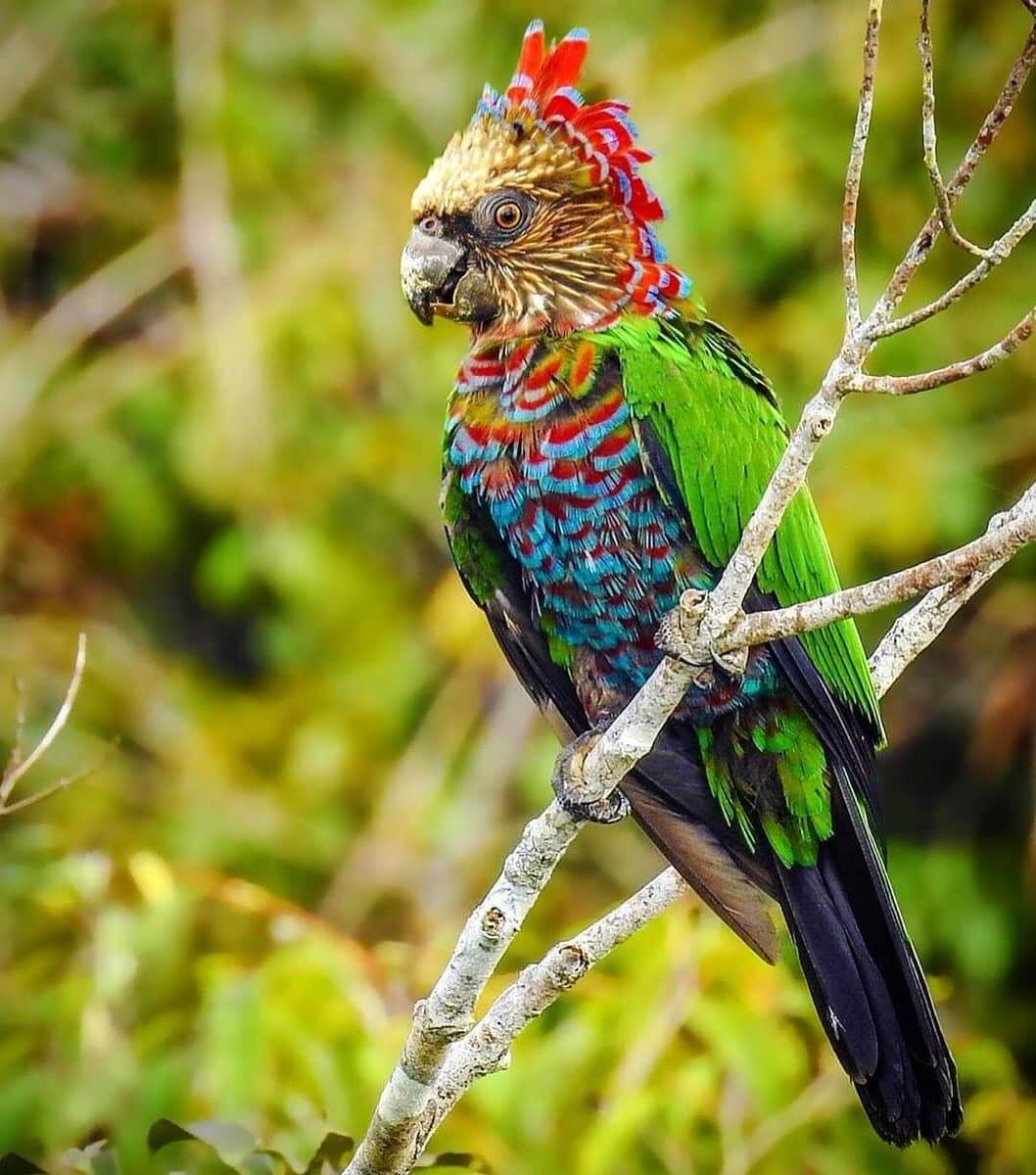 This species of parrot lives in South America, in the Amazon forests. They have unusual mottled plumage. The primary color is green, the back of the head is dark carmine, and the chest is dark red with a pale blue border. The beak is dark brown.

If the Red-fan parrot is irritated, the feathers on the back of the head (long maroon) are raised to form a collar. It opens like a fan, so this parrot picked up this name.

The Red-fan parrot is very friendly and quickly converges with humans. This type remembers no more than ten words, but it can reproduce other sounds: phone ringing, cat meowing, etc. 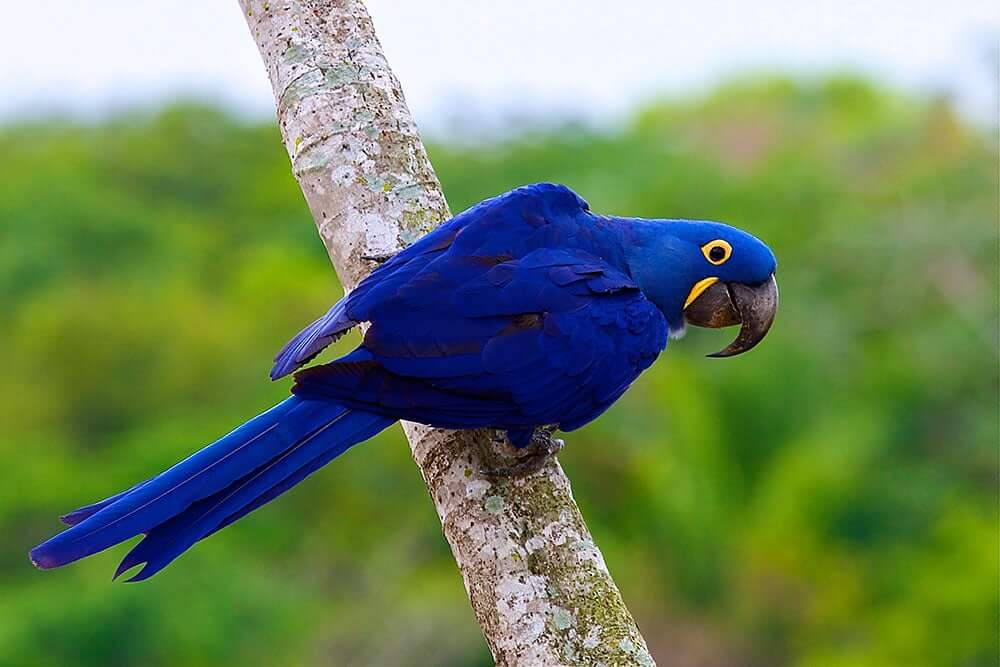 The Hyacinth macaw is a very bright and beautiful bird, one of the largest species of flying parrots. It weighs about 1.5 kg and is up to 98 cm long. They have a unique color: the feathers are blue, and there is a yellow ring around the eyes. The tail is narrow, and the paws are gray. The beak is powerful, black, and gray.

The Hyacinth macaw threatened extinction because people constantly hunted them and occupied the territories of their habitat. Thanks to timely protection programs which has saved this bird species.

The parrot’s voice is booming and harsh. An intelligent bird can reproduce a person’s speech, engage in dialogues with them, and even make jokes. 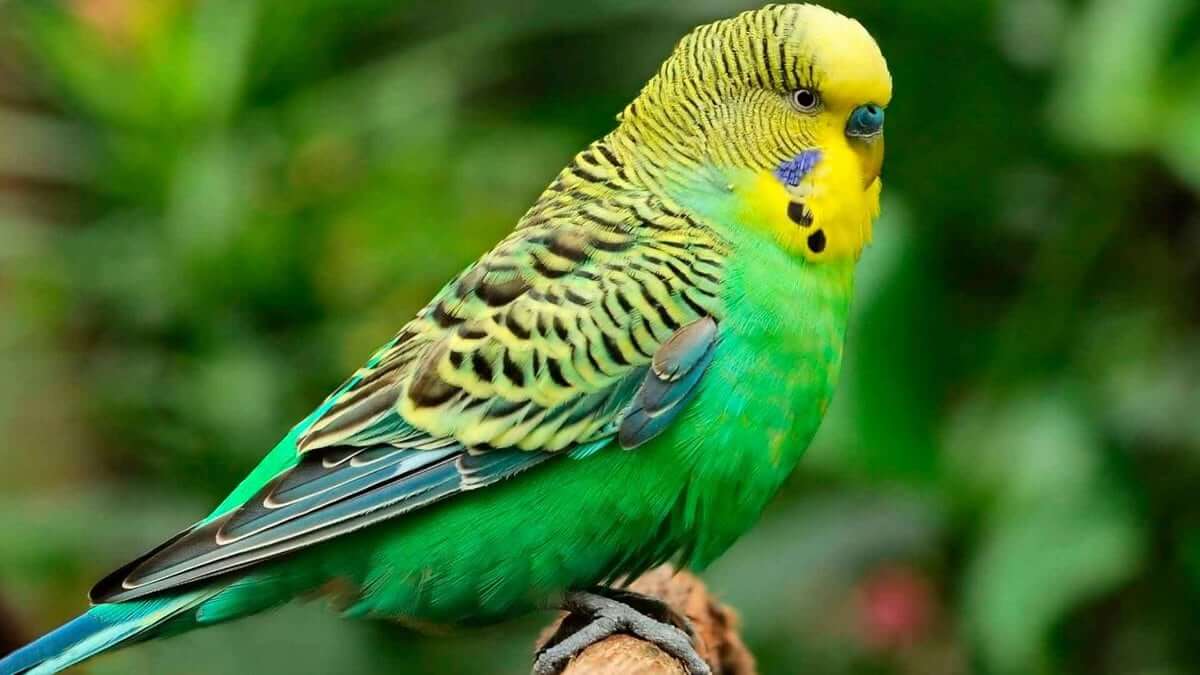 Wild Budgerigar lives in Australia. But the number of birds in captivity is much higher than in nature. And all because they are incredibly charming, funny, and beautiful. Their head and upper back are covered with a dark wavy pattern.

The primary color of parrots is grass-green. In nature, birds of a different color would not have been able to survive, but parrots of different colors have long been bred in captivity: in 1872, yellow birds appeared; in 1878 – blue; in 1917 – white. Now there are even more of these colors, so in the pet store, Budgerigars look like a rainbow-colored chirping cloud, and some of the birds amaze with various colors and shades.