Top 10 biggest jellyfishes in the world

Jellyfishes are the oldest marine life that appeared hundreds of millions of years ago. These underwater inhabitants got their name because they resemble the mythical creature – Medusa the Gorgon. The body of these fishes of the marine world is more than 90% water. Salt waters are their favorite habitat. Translucent creatures are the object of research by scientists. Poisonous and the largest jellyfish are of particular interest. 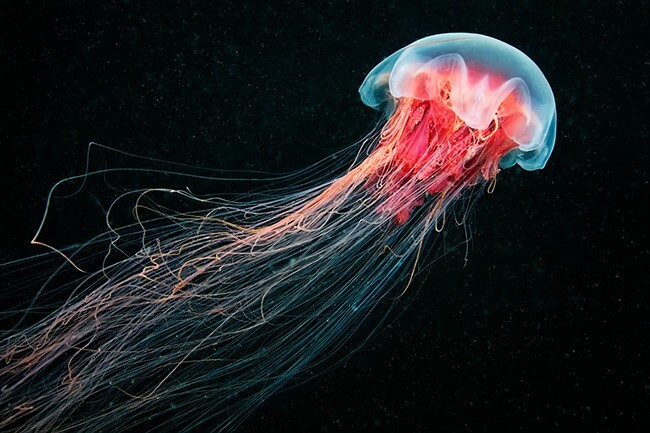 Lion’s Mane Jellyfish ranks first among the biggest jellyfishes in the world. The body of each jellyfish is capable of reaching 2.3 meters, and the length of the tentacles is 37 meters. The main habitat of this species is the seas and oceans. These jellyfish rarely approach the shores and prefer to exist at 20 meters depth. The biggest Lion’s Mane Jellyfish does not pose a danger to humans. Its bite can only cause a burn. Large jellyfishes feed on plankton and other jellyfish. 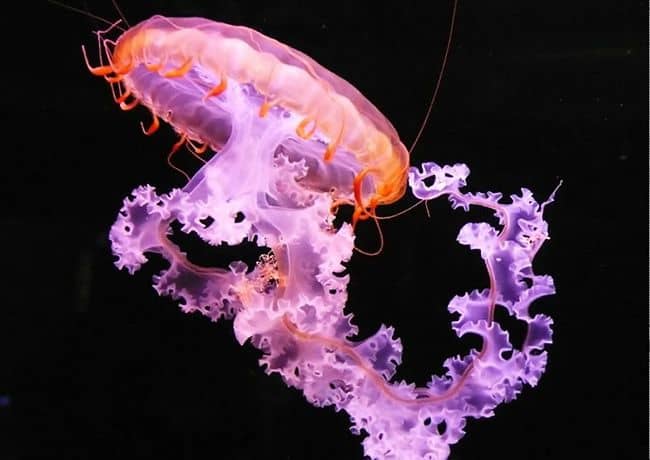 Bell of Nomura (Lion’s Mane) is one of the largest jellyfish species inhabiting the Far East seas. The size of Nomura is 2 meters, and its weight can reach 200 kg. Marine animals harm the fishing industry. The biggest hairy bell hits the nets, tangling them. When the fishermen try to free the net, Nomura stings the man sharply. In case of an allergic reaction to the poison, death from the bite of the Lion’s Mane is possible. From time to time, large-scale accumulations of Nomura are observed off the coast of the Sea of Japan. 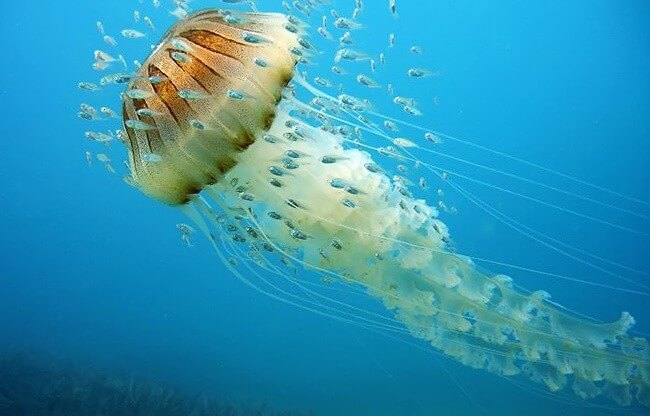 Medusa chrysaor jellyfish (Sea nettle) is an inhabitant of the Pacific Ocean opens the three biggest jellyfish in the world. The body of an adult chrysaor is capable of reaching 1 meter, and numerous tentacles – 4 meters. Tentacles torn from the body can separately exist in the depths of the sea for several weeks and sting.

Sea nettle bites leave fine scars on the skin. The victims experience sharp pain and burning, but they do not pose a danger to human health. chrysaor is one of the most beautiful jellyfish of its species, so the animal is often kept in aquariums and ponds. In the ocean expanses, the sea nettle feeds on plankton and small jellyfish. 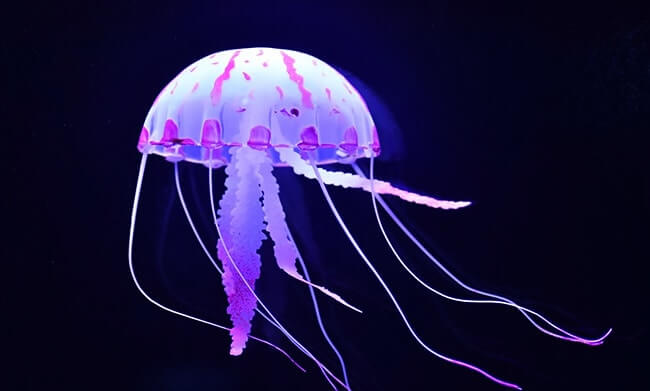 The purple striped jellyfish is one of the largest and most graceful jellyfish found in the Montarei Bay. The dome of the animal reaches 70 centimeters and has a rich color. A bite from a Purple Jellyfish can threaten a person with severe burns. This species has not yet been thoroughly studied by science, therefore there is very little information about the animal. 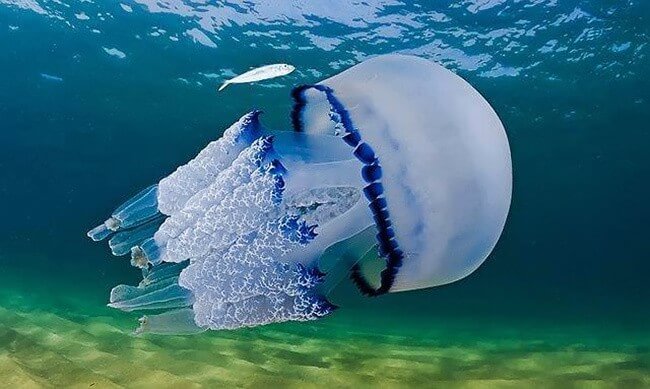 Cornerot is one of the largest marine jellyfish found in the Black and Mediterranean Seas. The weight of a sea inhabitant can reach 10 kg, and the diameter of the dome is 60 centimeters. For humans, Cornerot does not pose a danger and is capable of causing only mild irritation upon contact with the tentacles.

The Cornerot’s umbrella is a “haven” for small fish that hide under the dome from danger. This species feeds only on plankton. Jellyfish are actively used for the preparation of medicines, as well as in cooking. In Japan, Thailand and China, a variety of dishes are prepared from Cornerot. 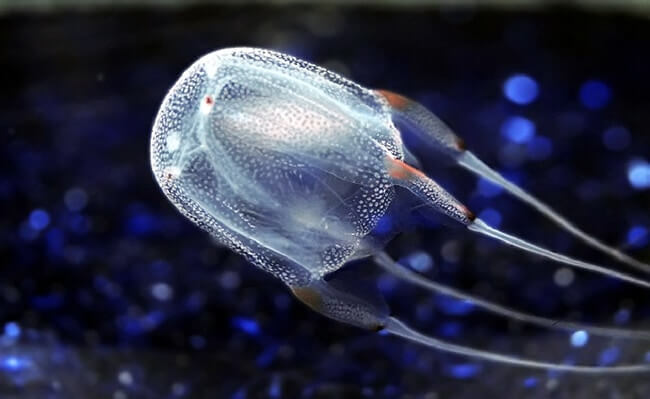 It instantly stings a passing object in several places at once. Death from the bites of a poisonous jellyfish can occur in just a few minutes. A stung swimmer gets enough dose for a heart attack and often drowns. It is quite difficult to notice this jellyfish due to its transparency. The Australian wasp feeds on small fish and shrimps. 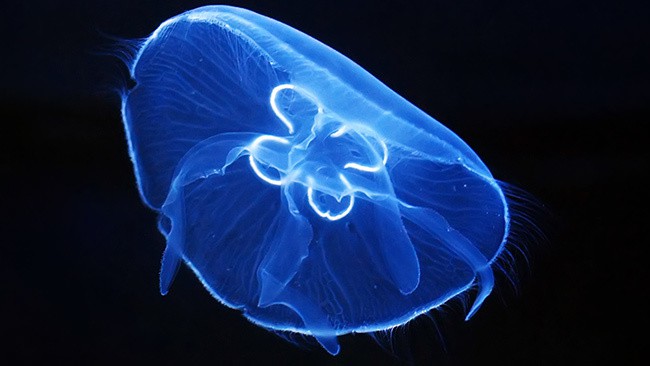 Aurelia (Long-eared jellyfish) is one of the most common large jellyfish species. Aurelia’s body is almost transparent and reaches 40 centimeters. Numerous slender tentacles have stinging cells that attack prey. The four mouth lobes resemble drooping ears, that is why Aurelia was named Eared. This species feeds mainly on plankton and crustaceans. A long-eared jellyfish does not pose a danger to humans, and its bite can only cause a burn. In Asian countries, Aurelia is used to prepare exotic dishes. 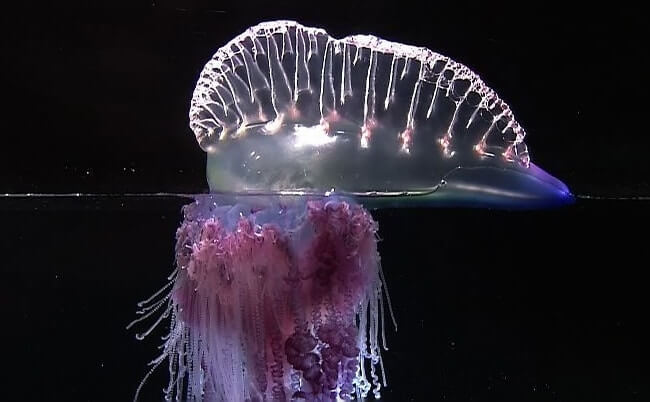 Portuguese boat (Physalia) jellyfish is a bubble in the form of a “sailboat” floating on the surface of the water. The body of the “sailboat” is 25 centimeters, but Physalia’s tentacles can reach 50 centimeters, which she hides under water. Has a beautiful blue or purple color. The Portuguese boat prefers to feed on fish larvae and small squid. Physalia is one of the most poisonous marine jellyfish.

Upon contact with its tentacles, a person receives a severe burn, which is accompanied by acute pain. The injected poison is capable of paralyzing all vital organs, so it is difficult for a stung swimmer to stay on the water, and the person drowns. The Portuguese boat is easy to spot from afar, thanks to its bright and beautiful colors, so you can avoid meeting with it while sailing. 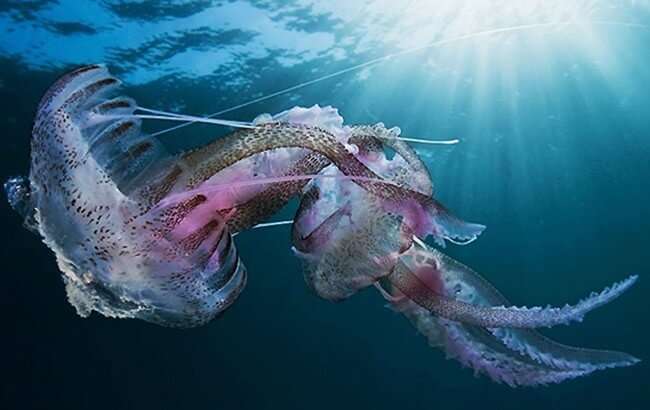 Pelagia noctiluca (Night Light) is one of the most beautiful discome jellyfish, which is common in the waters of the World and Atlantic Oceans, as well as in the Red and Mediterranean Seas. The diameter of the jellyfish’s body reaches 12 centimeters. The color of the umbrella is purple-red and has ornate ruffles around the edges.

In addition to stinging cells and tentacles, Pelagia has four mouths. Medusa begins to glow at the moment of contact with any objects. The main living creature that the Night Light feeds on is benthos, sometimes fry and crustaceans. Jellyfish poses a certain danger to humans, since its injected poison causes burns, and in some cases shock. 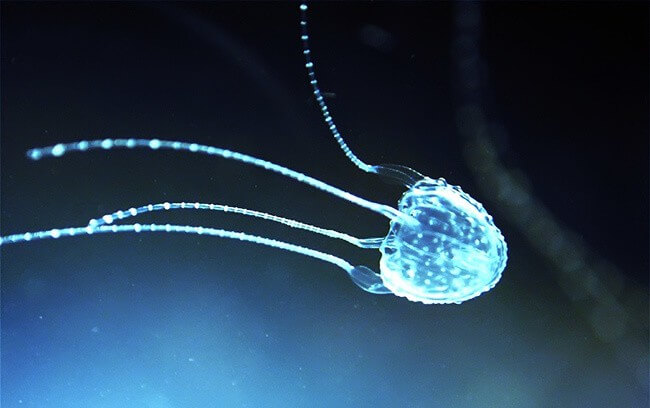 The Irukandji jellyfish is one of the most poisonous Pacific jellyfish. The main habitat is Australian waters. The diameter of its dome is about 10 centimeters. The Irukanji has four tentacles that can reach up to 1 meter in length.

A jellyfish bite is dangerous for humans and can cause a number of unpleasant consequences: pain throughout the body, nausea, vomiting, tachycardia and even pulmonary edema. In rare cases, death can occur. Irukaji’s poison has a slow-acting property, so symptoms can occur within a few days. Despite its small size, it poses a certain risk for swimmers.