What is the internet? history and stages of development

After analyzing the set of existing definitions, I tried to give my best one. (basically not different from the others, but incorporating all the main points of other definitions)

In 1957, after the USSR launched the first artificial earth satellite, the US government decided that in the event of war it would be nice to have a reliable data transmission system. The development of such a system was entrusted to several large universities in America.

The computer network in the project was called ARPANET (English Advanced Research Projects Agency Network) and already in 1969, the network-connected four universities: California, Stanford, as well as the Universities of California and Santa Barbara. All works received funding from the US Department of Defense. Later the ARPANET network was used by scientists from different fields of science – the network grew.

In 1969, on October 29 at 9 pm, the first sessions of the network, located 640 kilometers apart – at the University of California, Los Angeles and at the Stanford Research Institute – held the first communication session. Operator Charlie Kline tried to perform a remote connection to a computer located in Stanford.

The successful transfer of each symbol introduced by his colleague, Bill Duvall, confirmed by telephone. Initially, we managed to send only three symbols “LOG”, after which the network stopped working. The symbols “LOG” were to be the word LOGON (logon command). In working condition, the system was returned to half-past eleven in the evening and the next attempt was successful. This date is also considered to be the day when the Internet appeared. 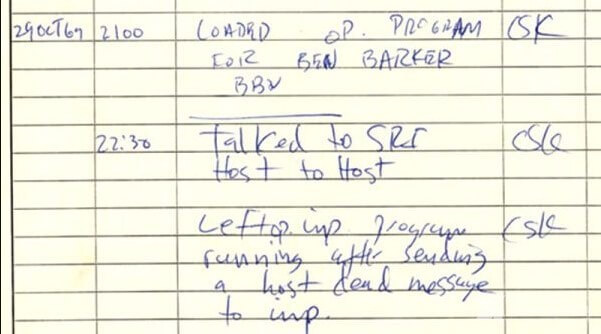 After the first successful transfer of data in the ARPANET network, the next milestone was the development in 1971 of the first program to send e-mail over the network. This program instantly gained popularity

By 1973, the network included the first foreign organizations from Great Britain and Norway through the transatlantic telephone cable. Since then, the network has become international.

In the 70s of the last century, the main purpose of the network was to send the e-mail. At the same time, there are first mailing lists, various bulletin boards, and newsgroups. However, in interaction with other networks built on other standards, there were big problems. The rapid development of various data transfer protocols, as well as their subsequent standardization in 82-83 years and the transition to a “common”, combining the TCP / IP protocol,  solved this problem. This transition took place on January 1, 1983. It was in this year that the ARPANET network consolidated the term “Internet”.

The next stage of development was the development of the domain name system (English Domain Name System, DNS), which took place in 1984.

Also this year there is a serious competitor of the ARPANET network – the inter-university network NSFNet (English National Science Foundation Network ). This network was a combination of many small networks, had a much higher bandwidth than ARPANET, as well as a high dynamic of connecting new users (about 10 thousand cars per year). The proud title “Internet” was transferred to NSFNet.

In 1988, the protocol was announced for the instant transmission of text messages Internet Relay Chat (IRC), and as a result, live chat in real time was made possible on the Internet.

In 1989, the famous British scientist Tim Berners-Lee offers the concept of the World Wide Web. He also develops the HTTP protocol, HTML hypertext markup language, and URI identifiers over the next two years.

In 1990, the ARPANET network, losing in the competition with NSFNet, ceases to exist. Also this year the first connection to the Internet via the telephone line (Dial-up access) took place.

1991 was marked by the accessibility of the World Wide Web on the Internet.

1993 – the appearance of the famous web browser NCSA Mosaic. The rapid growth of Internet popularity.

Since 1996, the World Wide Web ( WWW ) almost completely replaces the concept of the Internet and overtakes the FTP file transfer protocol.

In the 1990s, there was a massive unification of most of the existing networks under the Internet flag (although such networks as Fidonet remained isolated). The openness of technical standards in many ways contributed to the rapid growth of the network. By 1997, the Internet had about 10 million computers and more than 1 million domain names. The Internet is the most popular medium for information exchange.

Now you can access the Internet through telephone, radio channels, cellular communication, communication satellites, cable television, special fiber-optic lines, and even electric wires. And since January 22, 2010, direct Internet access has appeared on the International Space Station.