Top 10 ugliest animals in the world

Ugliest animals: The diversity of the animal world of our planet is so great that sometimes it amazes and surprises us with its wealth and abundance. Among the creations of nature, there are not only cute and beautiful creatures. There are rare species that repel their unattractive appearance and are quite worthy of acting in horror films.

These are the top 10 ugliest animals in the world. 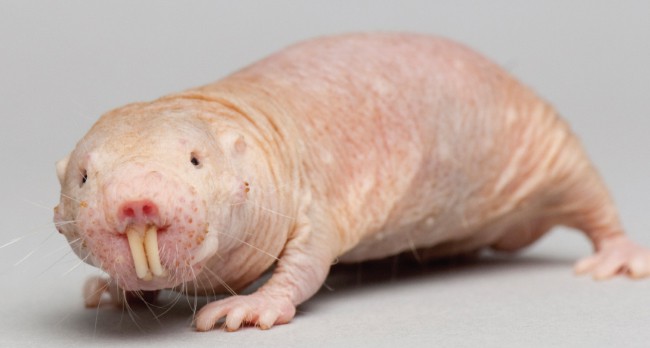 Topping the ranking of the ugliest animals is the Naked mole-rat. The ugly rodent has several characteristics: it is not sensitive to some types of pain and has good immunity to cancer cells. The average life expectancy is 30 years. The body of a naked mole-rat, together with its tail, most often does not exceed 14 centimeters, and they weigh no more than 80 grams.

These underground animals have mighty, developed jaws that help them bite into hard soil and a very keen hearing. Bare wrinkled skin, with practically no hair, has a pink color, sometimes with yellowish tints. Their habitats are in Dry savannas and semi-deserts of Somalia, Kenya, Ethiopia.

The naked mole-rat feeds exclusively on root crops and does not consume water. These rodents live in colonies, which can consist of 80-300 rats. The length of the tunnel occupied by one colony is 3-5 km.

Among the ugliest creatures on the planet, Star-nosed mole is one. A mammal of the Talpidae family can scare off anyone who meets on its way with its appearance. It’s all about the ugly growths on the animal’s face, which together resemble a star. Hence the name is star-nose. These underground inhabitants grow up to 13 centimeters in length. The weight of an adult generally does not exceed 85 grams.

The growths on the animal’s face serve as an organ of smell. With the help of it, it determines the suitability of the product for food. You can meet the star-nosed in the east of North America, which lead an active lifestyle, both during the day and at night. They feed on earthworms, sometimes small fish. 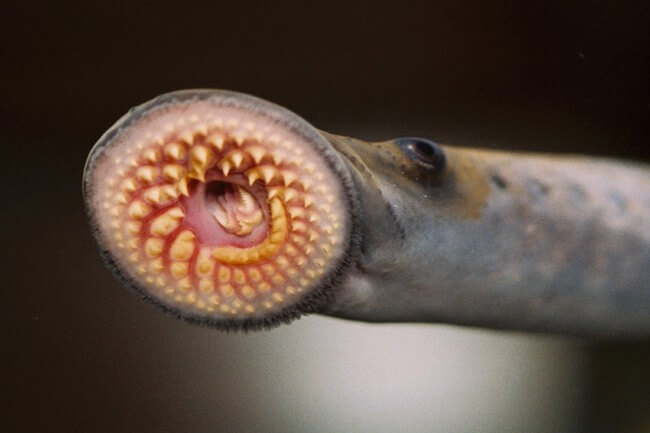 Sea lamprey unlocks the position of the top third ugliest animals in the world. An adult grows up to 1.2 meters in length, and its weight can reach 2.5 kg. It has a cylindrical body with a round-mouth funnel. The teeth are on the tongue of the animal.

Sea lampreys are parasites that stick to fish. As a result, their victims die from an infection or severe blood loss. Animals live up to 3 years. The distribution of sea lampreys are the White Sea, the Adriatic, and the western Mediterranean, rarely found on the east coast of North America. 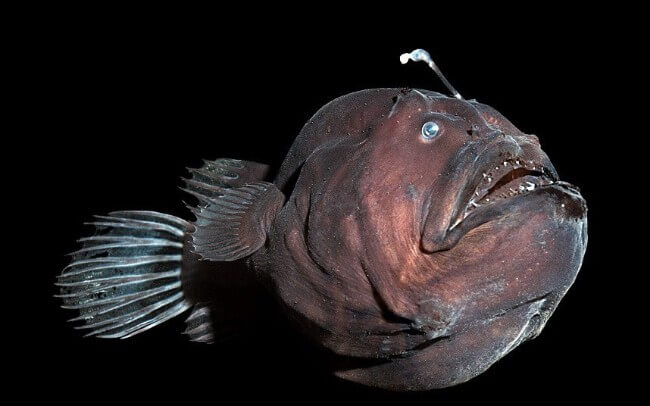 The fourth position on the list of the ugliest animals is the Angler. The giant sea monster can reach a length of 2 meters and weigh up to 57 kg. Angler is an edible fish. Especially dishes made from this meat are popular in France. The habitat of the Angler is quite vast, but most often, it can find off the shores of the Atlantic Ocean. The depth at which the sea creature can inhabit ranges from 18 to 550 meters.

The animal feeds mainly on fish. Fish lurks at the bottom, and at the moment when the victim swims up, swallows it along with the water. Thanks to the hand-like pectoral fins, the Angler can gradually creep up to the victim or even jump, catching it by surprise. 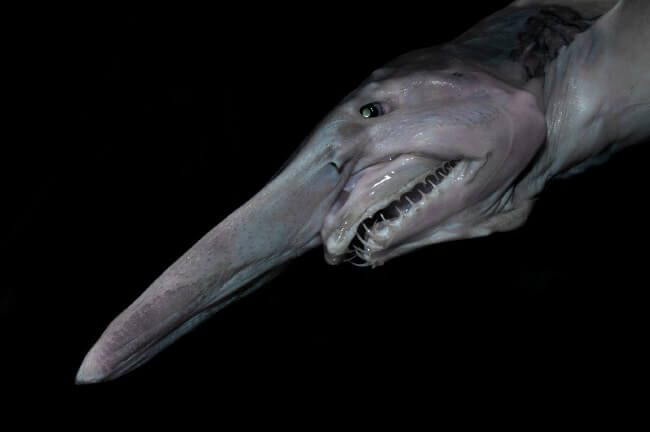 In fifth place among the ugliest animals in the world is the deep-sea Goblin Shark. The giant shark of this species can reach 4 meters in length and weigh 200 kg. Such sharks are familiar from the Australian waters of the Pacific Ocean to the Atlantic.

They live at a depth of more than 200 meters. They feed on fish, squid, and crabs. Goblin sharks have sharp and long front teeth, and their back teeth are adapted for crushing shells. Since the animal lives at great depths, it does not pose a danger to humans since the chances of meeting in the sea are negligible. 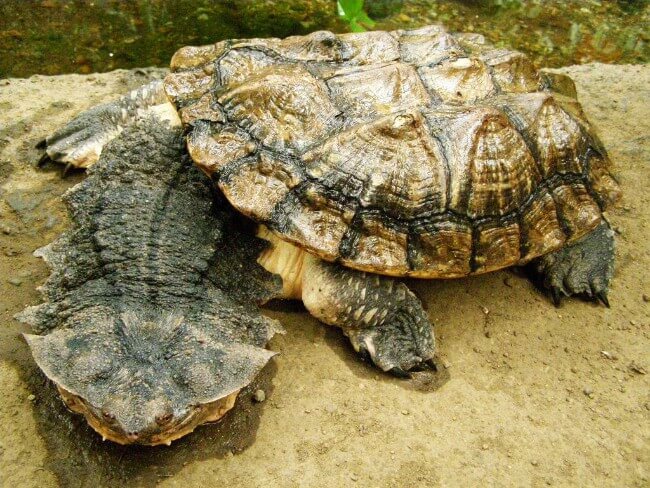 The sixth position among the ugliest animals in the world is the giant tortoise, Mata Mata. These bizarre animals can reach a length of 50 cm and gain weight up to 15 kg. What makes the turtle unattractive is its triangular head with a beak and a long neck with numerous growths.

Mata Mata is quite common; it chooses stagnant waters as its habitat. The diet of a mata mata mainly consists of fish. It loves heat very much. Therefore it chooses reservoirs where the water has a temperature of at least +28 degrees. Under suitable conditions, it can live in captivity. 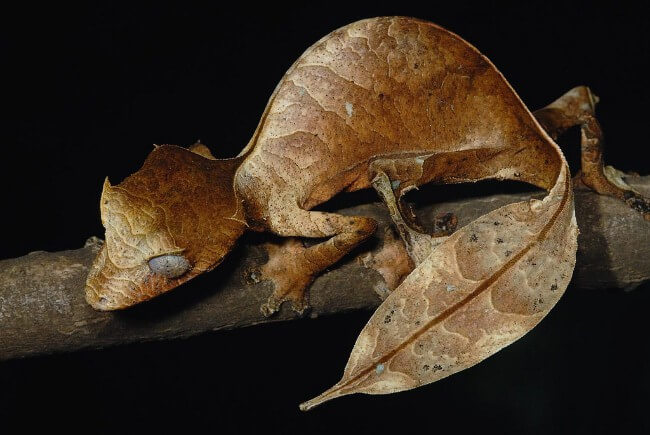 The Satanic leaf-tailed gecko is one of the ugliest living creatures on earth. They live mainly in Madagascar. A unique feature of geckos is their protective coloration, which can change and adapt to the surrounding objects. Adults can reach a length of more than 30 centimeters. Forest dwellers are exclusively nocturnal. Geckos have huge eyes that have no eyelids and use their tongue to clean the visual organ. Animals feed on insects that are extracted from the ground. 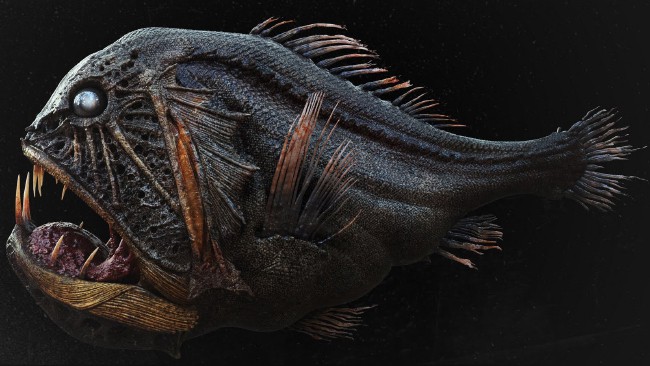 The common fangtooth occupies the eighth position among the ugliest animals. These are relatively small fishes, reaching 15 cm and weighing no more than 120 g. It has a large head, and well-developed jaws have numerous, intimidating canines. The fish’s habitat consists of the Pacific, Atlantic, and Indian Oceans. They live at a depth of 500-700 meters. The sabretooth’s diet consists of fish, squid, and crustaceans. 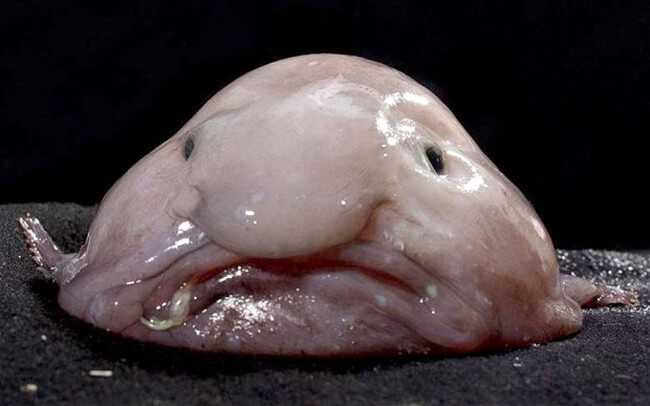 The Blobfish ranks ninth in the list of the ugliest animals. Habitat of these species is considered to be the coast of Tasmania and Australia, where they live at a depth of 600 to 1200 meters. In length, the fish can reach 30 centimeters.

A unique feature of these sea creatures is the lack of a swim bladder, which helps other fish stay afloat. Instead of a bubble, this function is performed by the gelatinous body of a Blobfish, which has a lower density than that of water. These sea creatures rarely move, waiting for the moment when the victim itself will swim by. 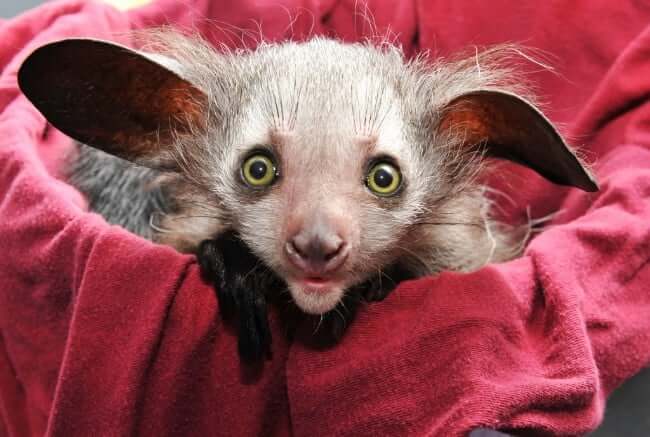 Ends the top ten ugliest living creatures Aye-aye, also known as Daubentonia madagascariensis. It is a scarce animal species listed in the Red Book. It lives in the tropical forests of Madagascar. The animal can reach no more than 45 centimeters in length, and it weighs about 3 kg. The tail exceeds the size of the body and is 60 cm.

The Madagascar Aye-aye has enormous eyes and equally large bald ears. The animal feeds on insects, which it extracts from the bark of trees with the help of claws.