Although Russia is often seen through the prism of cities such as Moscow and St. Petersburg, it has much more to offer. Natural landscapes turn Russia into a paradise for travelers, which to this day is not so wide open to the eyes of the layman. For all passionate travelers, we officially declare the most breathtaking mountains here!

Even if you are not an avid mountaineer or just a mountain climber, visiting these stunning peaks will add adventure to your Russian holiday.

“Is there anything better than mountains? Mountains you haven’t visited yet. ” Ask any Russian and they will surely recognize this famous song by Vladimir Vysotsky. And who can really disagree with that?

Caucasus, Altai, Ural, Siberia, Kamchatka – there are many places in the country where climbers and tourists can experience the magic of mighty peaks for themselves. 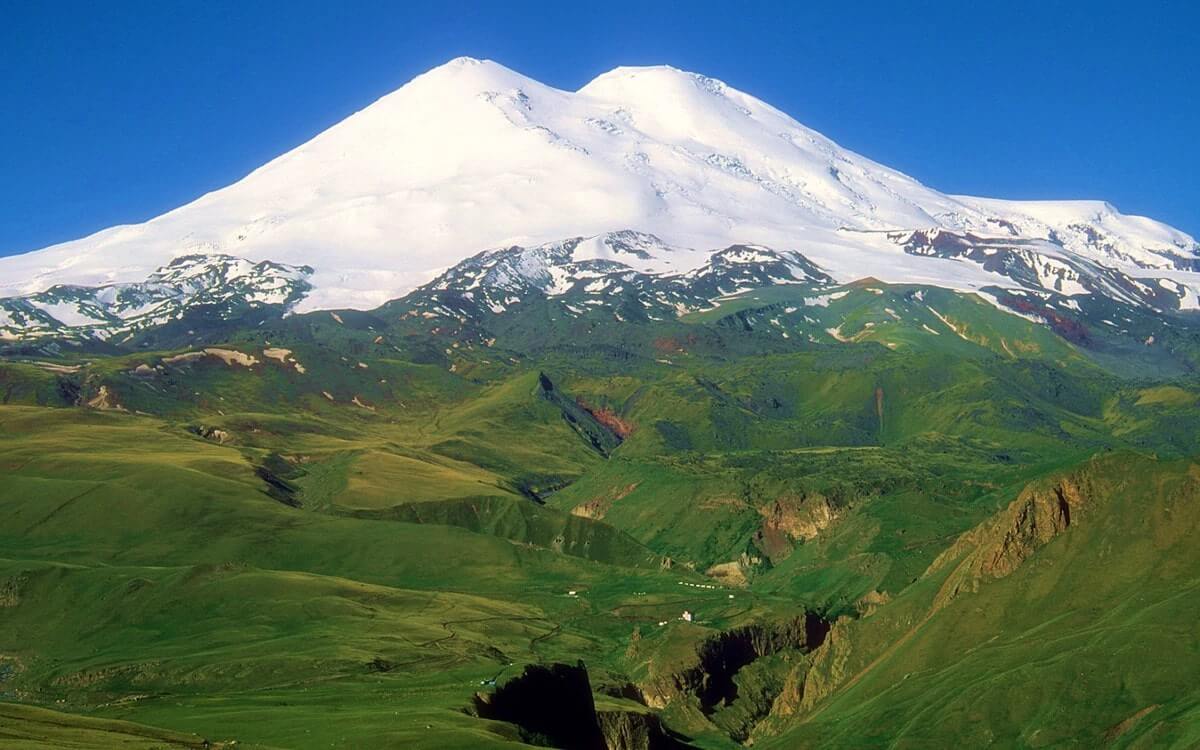 Elbrus is an extinct volcano with two cones reaching 5642 meters and 5595 meters in height. The volcano was formed over 2.5 million years ago. Sulfur gases are still being emitted on its eastern slopes, and there are many mineral springs along the downdrafts.

The total area of Elbrus, 138 sq. Km is covered with 22 glaciers that feed the Kuban River and some of the upper reaches of the Terek. Elbrus is a major mountaineering and tourism center in the Caucasus region. In 1964, an extensive tourist and mountaineering base with large sports facilities was opened. 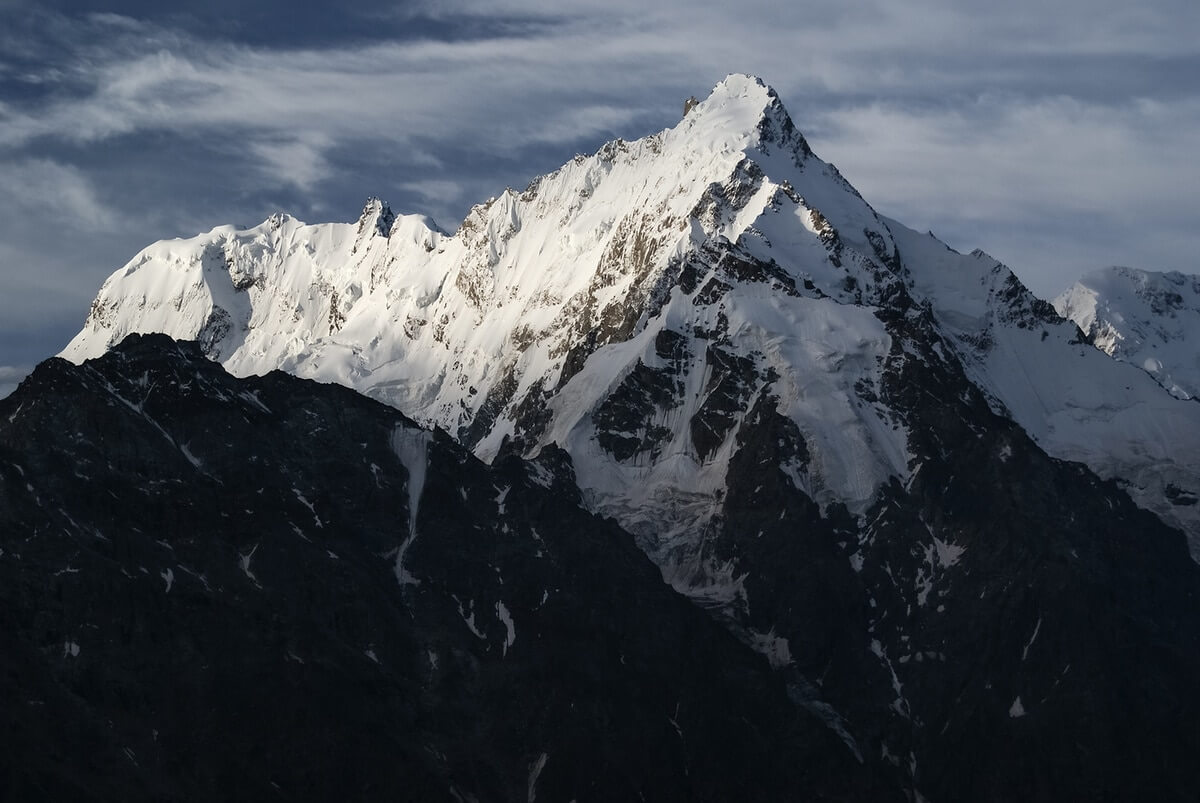 Dykh-Tau is the second largest in the Caucasus Mountains after Elbrus and the second highest in Europe.

This is one of the great Caucasian peaks facing the magnificent Besingi wall across the Besingi glacier. The first ascent of Mummery and Zarflukh in 1888 was a major achievement of that time. Their route up the southwest ridge is no longer used as a regular route. 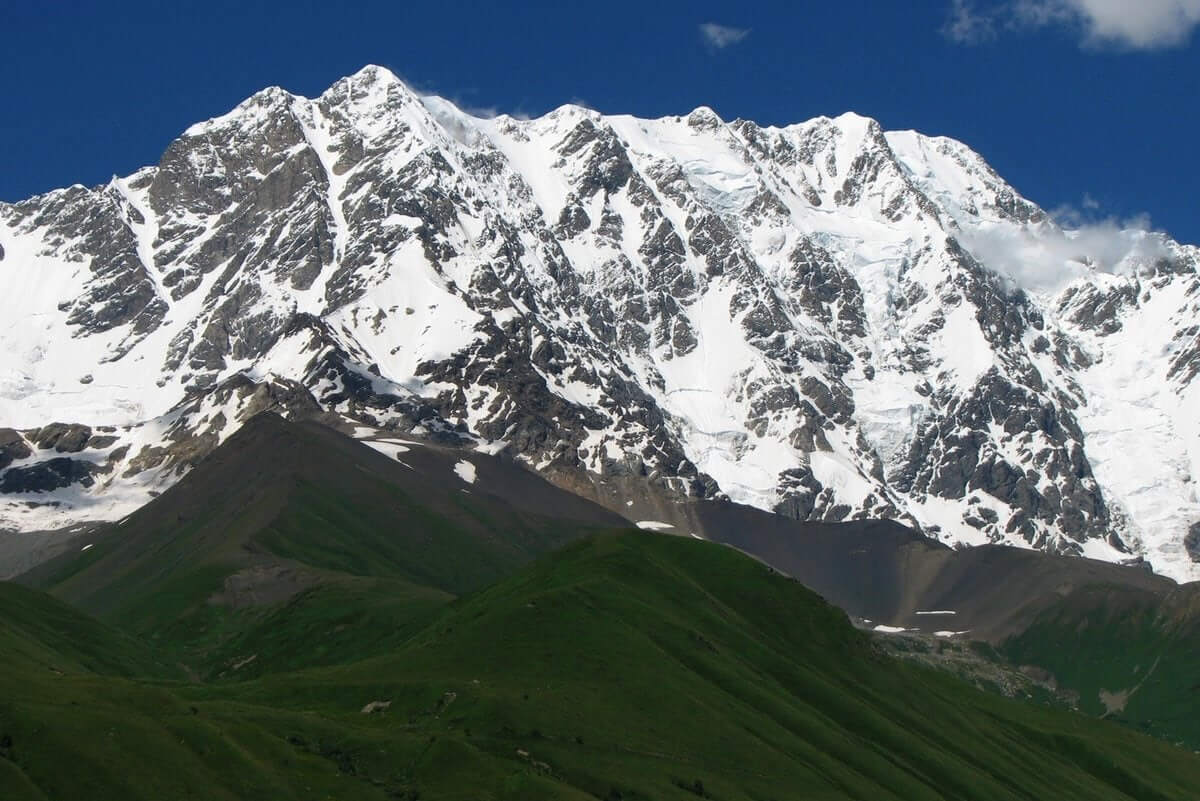 Shkhara is the highest point and eastern anchor of the massif known as the Bezingi (or Bezengi) wall, a 12-kilometer ridge. It is a large, steep peak in a heavily icy region and presents serious challenges for climbers. Its northern side (on the Russian side) is 1,500 meters high and contains several classic challenging routes.

The significant summit of Shkhara in the west, 5193 m high, is itself a climbing target, and crossing the entire Besinga wall is considered “the longest, most difficult expedition in Europe”.

The peak was first raised in 1888 along the route of the Northeast ridge by the British-Swiss team of W. Almer, J. Coquin, and K. Roth. This route is still one of the easiest and most popular routes on the mountain. The first full course of the Bezindzhi wall was in 1931 by the Austrians K. Poppinger, K. Moldan, and S. Shintlmeister. 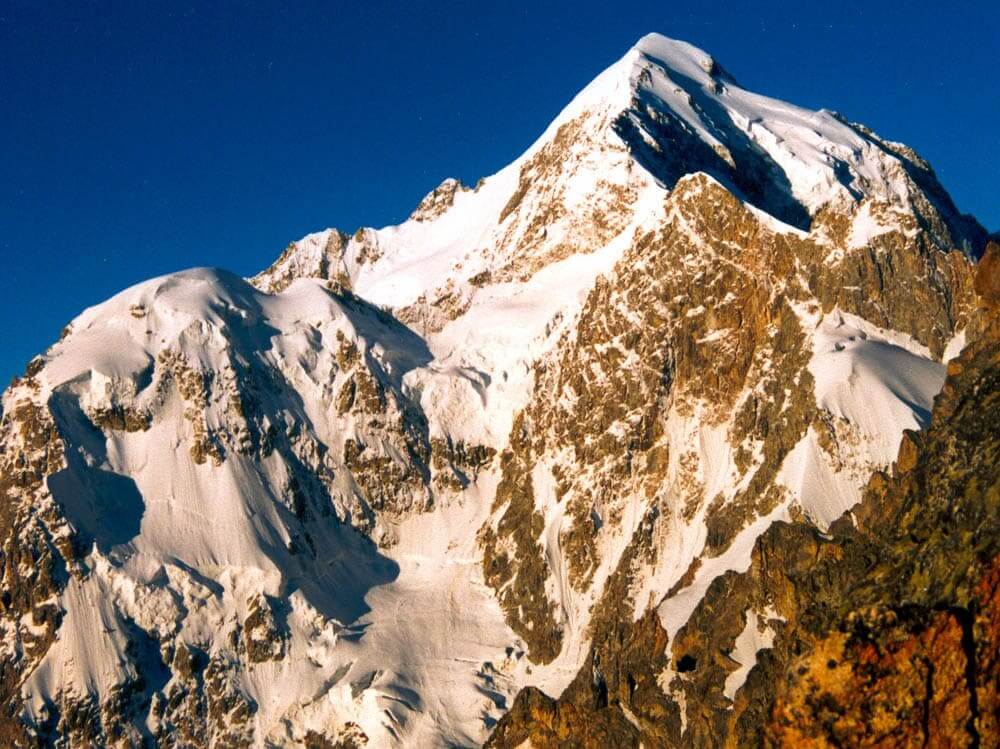 Koshtan-Tau is the fourth highest mountain in Europe. It is one of two “Brothers Bezengi” marking the eastern end of the Northern Massif. The Great Pyramid of Koshtan is impressive, and its northwestern face gives you a good idea of how difficult climbing the Caucasus can be.

The North Ridge route is fairly straight but long. Moreover, the journey to this summit is challenging and arduous as you have to climb three steps of the Mizhirgi glacier.

Most of the other routes at the summit are difficult and dangerous. Several years ago, a whole team of Ukrainian climbers was killed at the summit during a rock climbing competition. The peak is also known as Koshtan-Tau. 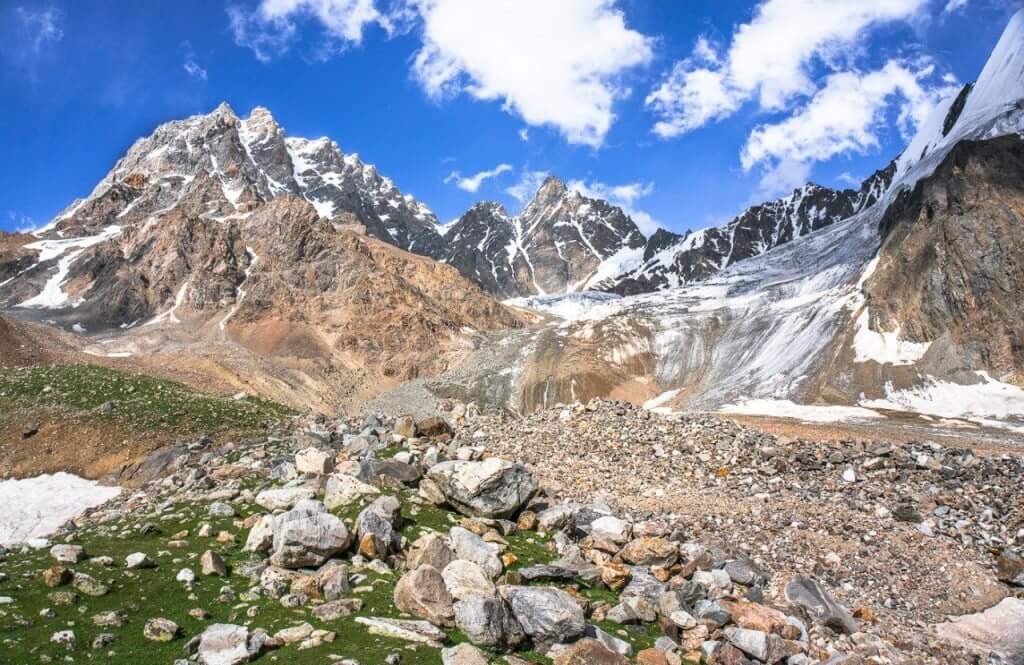 Pushkin peak is located in the Dykh-Tau Bezengi mountain range (Central Caucasus, Russia) between the Eastern Dykh-Tau and Borovikov Peak. From the top of Borovikov peak to the North there is a thin ridge.

Submitted in 1961 by the Spartak team led by Kletsko (3rd place in the USSR championship). The Kletsko route ran to the left of Borovikov Peak to the west of Mijirghi.

There is another track on Pushkinskaya 5B, laid by Kudinov in 1972 (4th place in the USSR Championship), passing more on the right. It walks along the avalanche-dangerous hanging glacier and is dangerous due to the ice collapse from the upper hanging glacier. 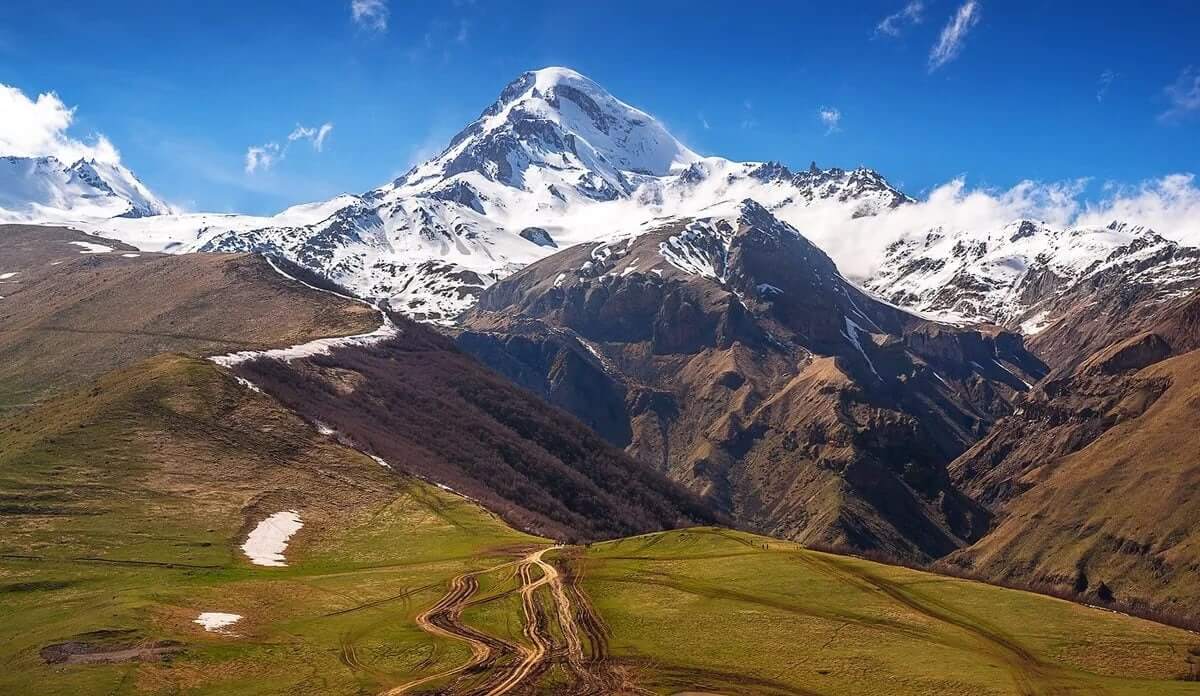 Known locally as Mkinvartsveri or the summit of the glacier, Mount Kazbek rises 5,032 meters above sea level, making it the tallest mountain in eastern Georgia and one of the highest in Russia. The peak is located right on the border with Russia, but the easiest way to climb is from the Georgian side.

Because of the relative ease with which this dormant stratovolcano rises, and the spectacular views from the summit, Mount Kazbek is one of the most popular climbers’ destinations in the Caucasus Range. Most tourists flock to climb it during June and July, but local guides also offer winter skiing trips.

Mount Kazbek was first conquered in 1868 by an expedition of English and French climbers in the Alpine Club, but for a long time, it had cultural and historical significance for the local population.

According to legend, the Georgian version of Prometheus was chained to this mountain as punishment for stealing fire from the gods and then passing it on to mortals. 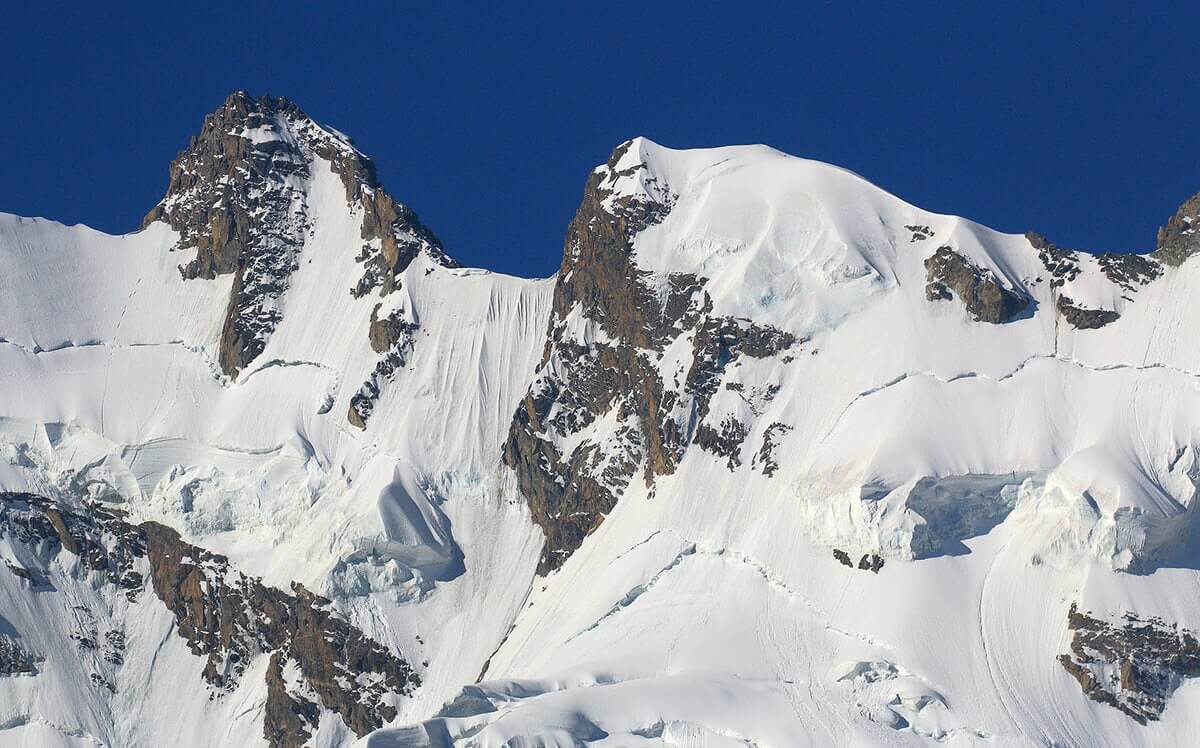 In early January 2009, Sasha Gukov, Sergey Kondrashkin, Alik Izotov, and Viktor Koval made their first winter ascent along the northern ridge of the Eastern peak of Mizhirgi.

Mizhirgi – the eastern auxiliary peak of Dykhtau, on the ridge in the direction of Koshtuntau; its northern side rises almost 2000 m above the basin of the Mizhirgi glacier.

The route was first climbed in August 1952 by a five-man team from Vasily Pelevin in a hard 5B but is rarely repeated due to poor rock and rockfall at the bottom. In 2009, the team experienced a lot of bad weather, making five bivouacs before reaching the summit. 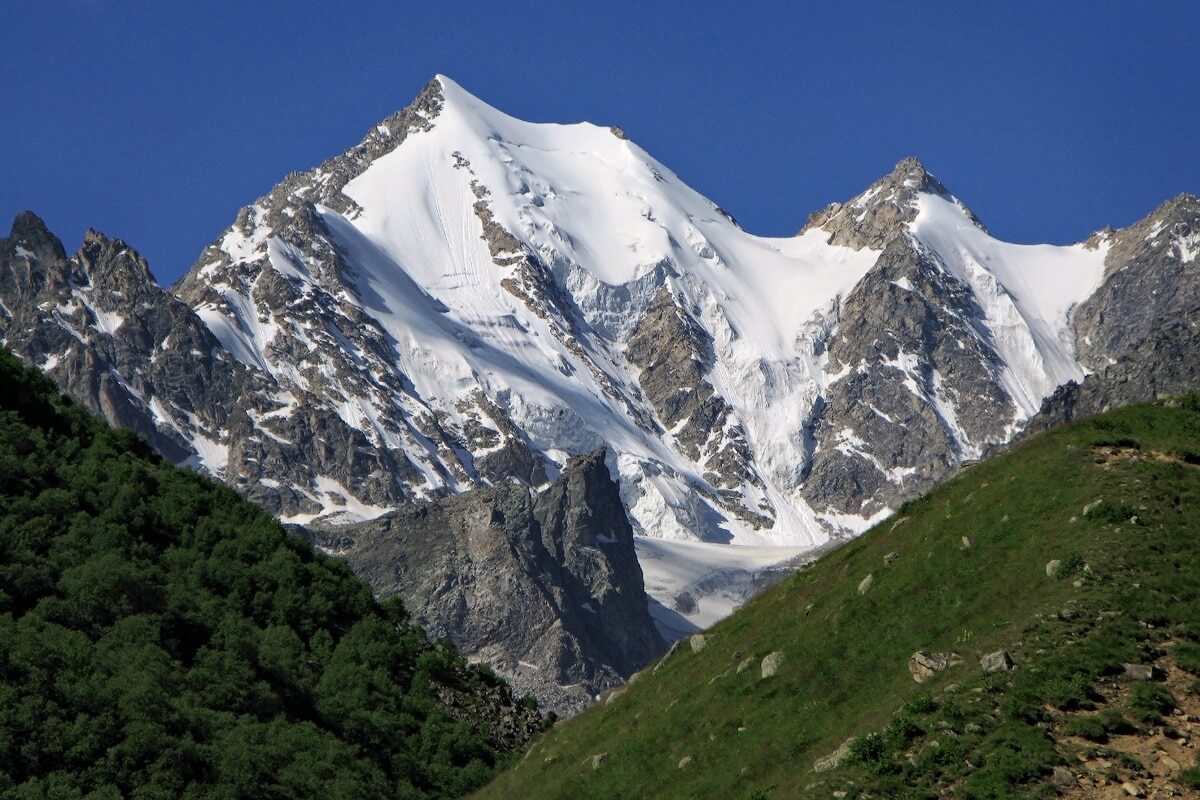 The mountain, better known as Shota Rustaveli Peak, is located in the central part of the Greater Caucasus Mountain Range on the border of Svaneti (Georgia) and Kabardino-Balkaria (Russia).

Shota Rustaveli is usually the ninth-highest point in the Caucasus. The slopes of the mountain are glacial and some of the glaciers descend well into the neighboring valleys. Its name originates from the famous Georgian poet Shota Rustaveli. 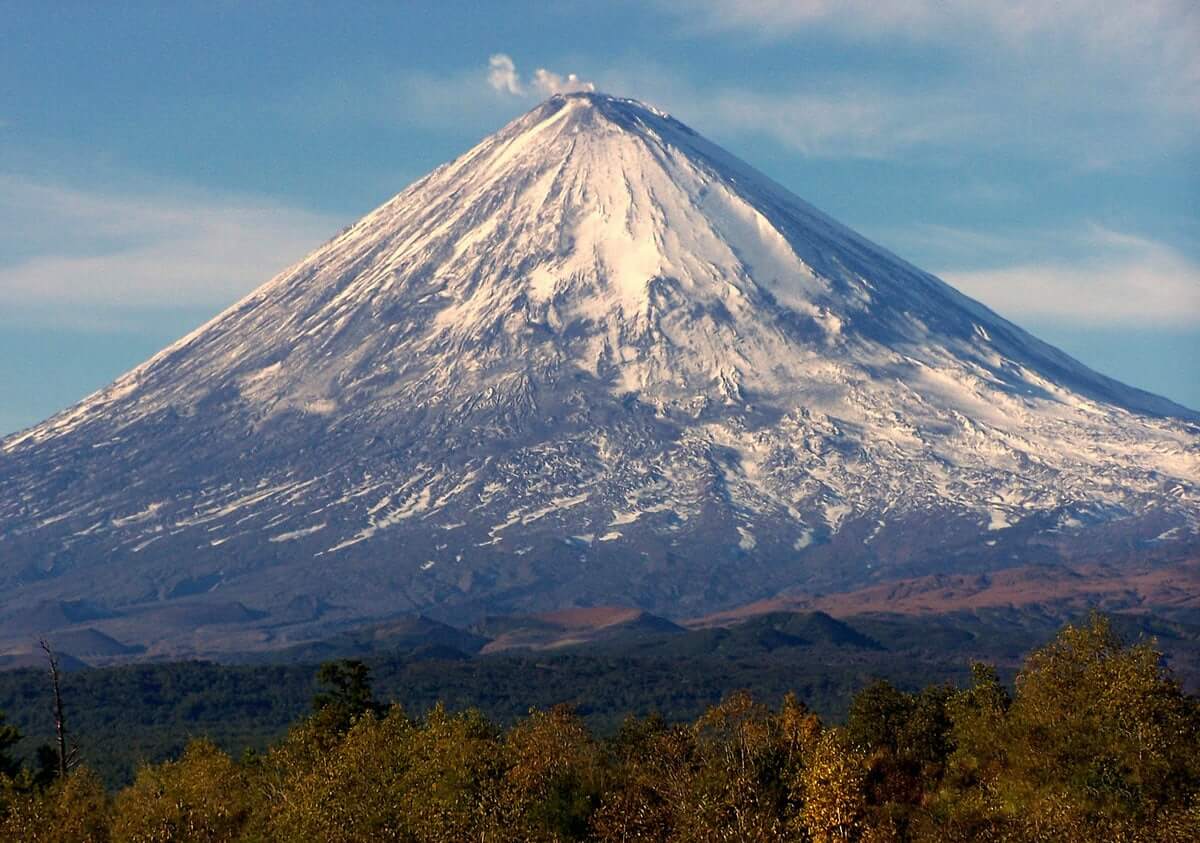 Klyuchevskaya Sopka appeared 6,000 years ago. Its first recorded eruption took place in 1697 and has been active almost continuously since then, like many of the neighboring volcanoes.

The peak was first conquered in 1788 by Daniel Gauss and two other members of the Billings expedition. Other climbs were not recorded until 1931 when several climbers were killed by flying lava while descending. Since such dangers still exist today, few ascents have been made to the summit. 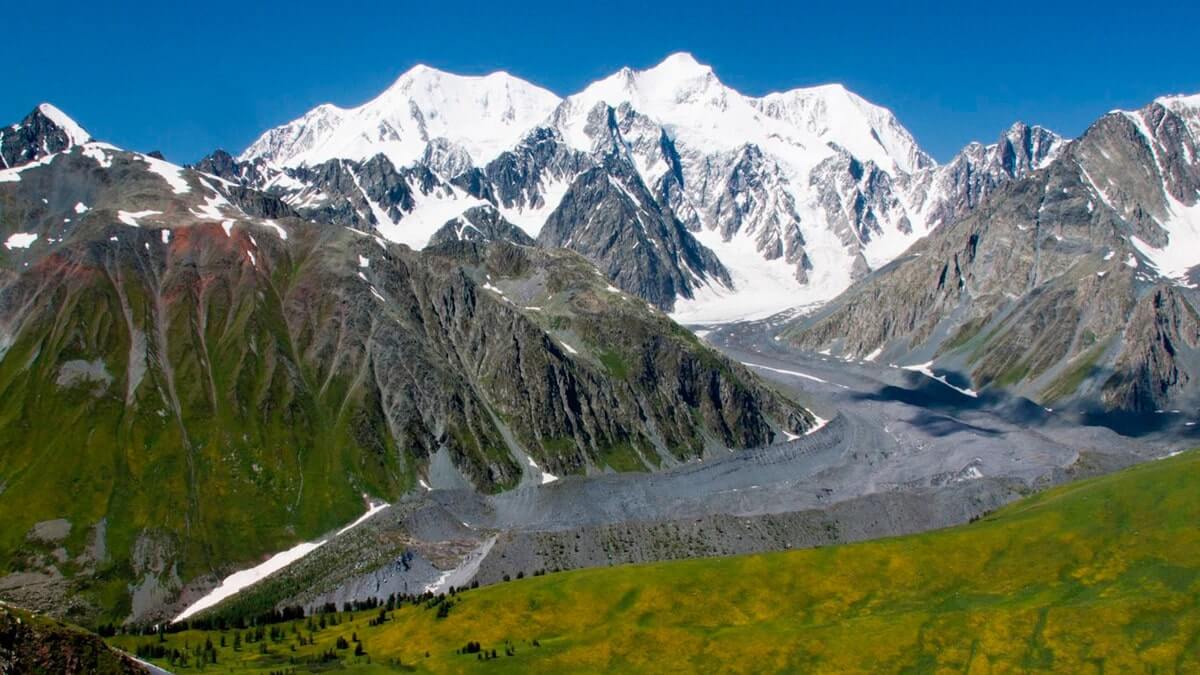 Rising in the Altai Republic, Belukha is a three-peaked mountain range that rises along the border of Russia and Kazakhstan, just a few dozen miles north of the point where this border meets the border of China. There are several small glaciers on the mountain, including the Belukha glacier.

Belukha rose for the first time in 1914 by brothers Tronov. Most of the ascents to the eastern summit follow the same southern route as the first ascent. Although Altai is lower in elevation than other Asian mountain groups, it is very remote and requires a lot of time and planning to approach.