Top 10 smallest birds in the world

The variety of birds is amazing. Among them, there are both real giants, such as African ostriches, which can weigh up to 150 kilograms, and very tiny creatures weighing no more than a few grams.

These are the top 10 smallest birds in the world 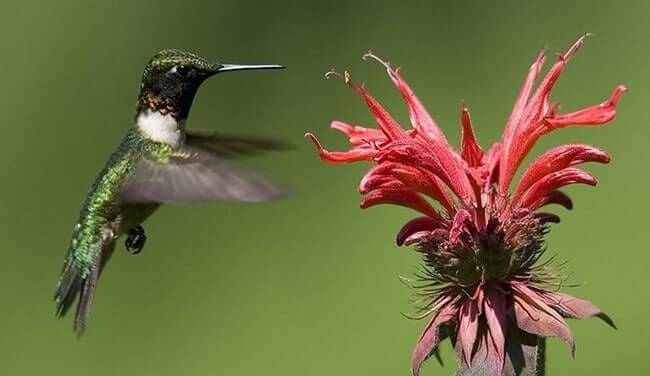 In first place among the smallest birds in the world is the bee hummingbird. This miniature creature is only 5-6 centimeters long. The weight of the crumbs is 2 grams. Two paper clips weigh the same amount. The bee hummingbird is found only in Cuba. It lives in wooded areas rich in vines in several areas of the island. It feeds only on nectar. Bee hummingbirds build nests from cobwebs, lichens, and bark about two centimeters in diameter. There are usually two pea-sized eggs in a clutch.

Bee Hummingbirds are some of the most amazing creatures on the planet. Their metabolic rate is striking. To conserve energy, they have to collect nectar from 1,500 flowers per day. In a calm state, the heart of these babies beats at a tremendous frequency – 300 beats per minute. All hummingbird species go into a daze at night. If the body temperature of babies is 43 ° C during the day, then at night it drops to 20 ° C, that is, by half. With the onset of the morning, hummingbirds “come to life”.

Female Bee hummingbirds take care of their chicks very carefully. It is believed that babies need to be fed every 8-10 minutes, otherwise they will weaken and may die. The female has to take care of the chicks and manage to get food for itself. Surprisingly, almost all hummingbird chicks survive. 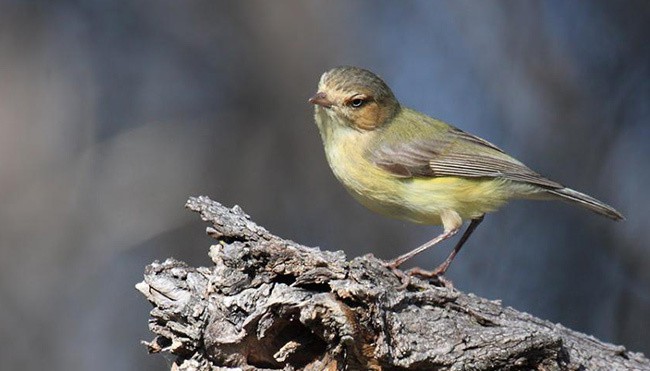 This ranked second in our ranking, the Weebill is one of the smallest birds inhabiting Australia. Body length is 8 centimeters, weight is 6 grams. Lives in wooded areas, preferring eucalyptus forests. 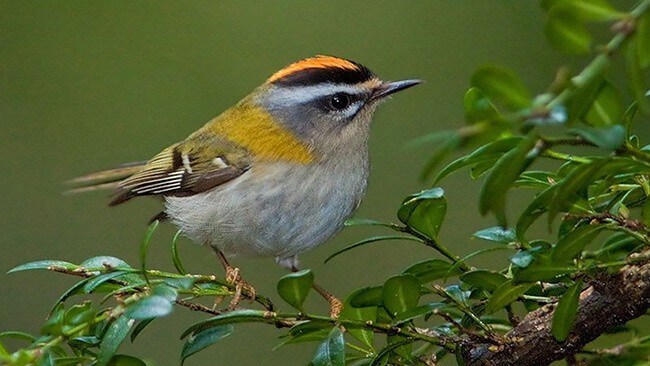 Kinglets are some of the smallest birds on the planet. For their tiny size, they are called “northern hummingbirds”. The body length does not exceed 9 centimeters, and the weight is 5-7 grams. They prefer to settle in coniferous forests. Kinglets are hardy crumbs that can withstand harsh climates. They live in the crowns of tall trees, feed on seeds, eggs, and insect larvae.

All types of beetles have a peculiar appearance that distinguishes them from other birds. Their main feature is bright crests that adorn the tops. The kinglets know how to raise and lower them. These are very mobile birds, in search of food, constantly flitting from branch to branch and sometimes hanging on thin branches upside down. The kinglet has melodious singing, which can be heard during the breeding season or when the bird is strongly excited. 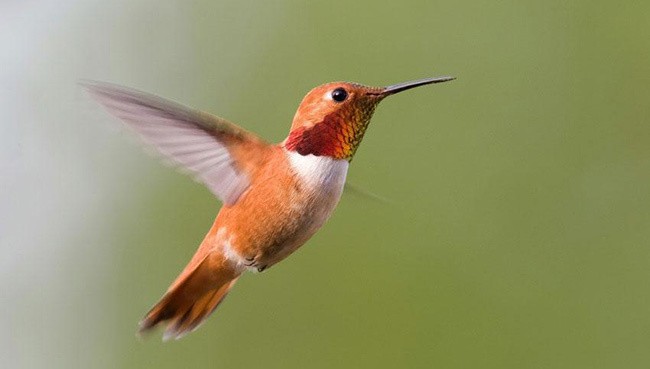 The fourth place in our rating is occupied by the Rufous hummingbird is the only species of hummingbirds, the smallest bird on Earth, which is found in Russia. Body length is 8 centimeters, weight is from 3 to 4 grams. The male has a brighter color – ocher-red plumage, white goiter, and bronze-green cap. The plumage of the female is greenish above, the underside is white, and the sides are buffy.

The bird lives in North America and goes to Mexico for the winter. On the territory of Russia, an ocher hummingbird was seen on Ratmanov Island. There is also information about bird flights to Chukotka, but there is no documentary confirmation of this fact. 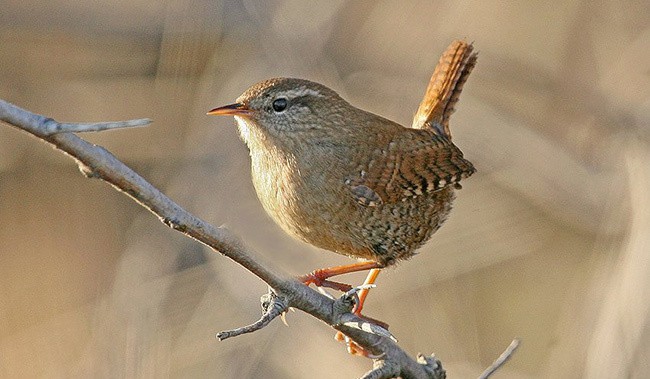 On the 5th place in the ranking of the smallest birds in the world is the wren. Body length is 9 to 10 cm. Externally, the bird looks like a lump of feathers with a perky tail sticking up. It is found in North America, Eurasia, and North Africa. Prefers raw mixed, coniferous, and deciduous forests, ravines, thickets near rivers, heather wastelands. The wren flies reluctantly tries to stay closer to the ground and nimbly makes its way through the thickets.

The wren has a strong voice, similar in beauty to the singing of a nightingale, therefore the bird is appreciated among songbird lovers. 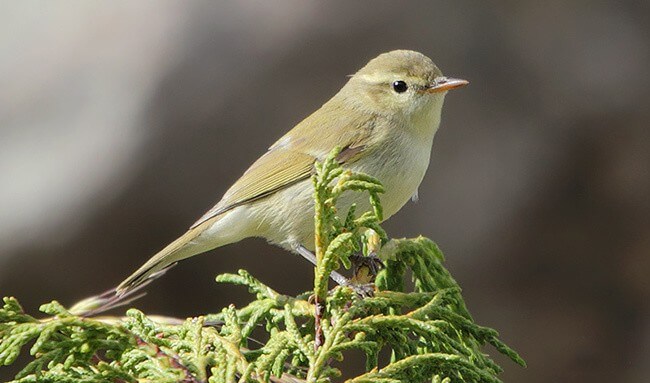 The green warbler is the 6th smallest bird on the planet. This tiny songbird weighs 8 grams with a body length of 10 centimeters. Outwardly, it looks rather inconspicuous: an olive-green back and an off-white abdomen.

The green warbler inhabits the mixed forests of Central Europe, alpine coniferous forests, and the southern taiga. The bird leads a secretive lifestyle, hiding high in the crowns of trees. The diet consists of small insects, spiders, and mollusks. 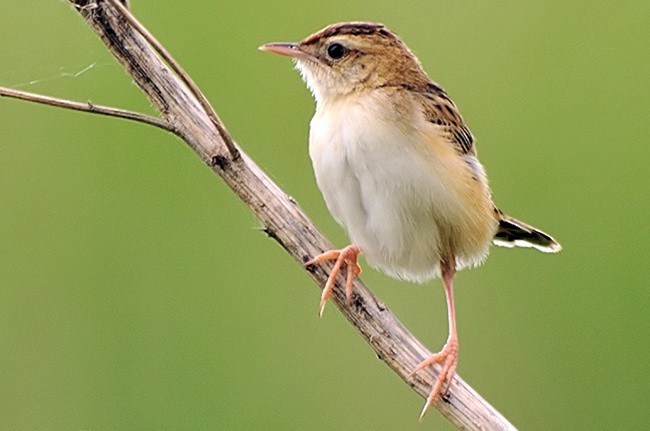 The Zitting cisticola is ranked 7th in our ranking of the tiniest birds on Earth. Body length is 10 centimeters. Distributed everywhere. Prefers to settle in not too arid landscapes near water bodies with vegetation and agricultural land. In India, the bird is often seen in rice fields. 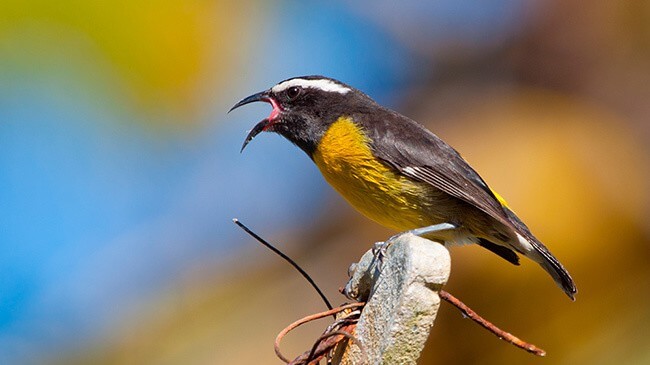 On the 8th place in the list of the smallest birds in the world is the Bananaquit. This adorable bird is 11 centimeters long. It lives in humid forests and gardens of Central and South America. The appearance of the Bananaquit is remarkable. The back is gray, the chest and abdomen are bright yellow. On its head is a black hat. The beak is small and curved downward.

The Bananaquit, like the hummingbird, feeds on nectar, berry juice, and small insects. Unlike hummingbirds, the bird cannot hover in the air. The Bananaquit has a long, forked tongue, covered with plates, adapted for extraction of nectar.

The interesting fact is that the female and male Bananaquit, unlike most other birds, look exactly the same. 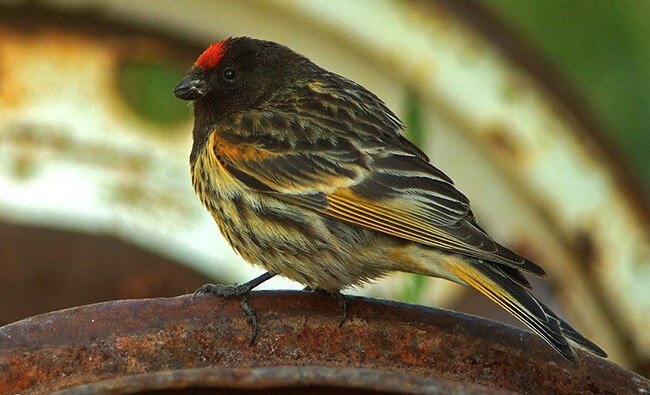 The Red-fronted serin with a body length of 11-12 centimeters is ranked 9th in the list of the smallest birds in the world. This small bird lives in high mountainous regions. Found in the Caucasus, Turkey, Pakistan, Iran, India. Since the Red-fronted serin reproduces well in captivity, it can also be found in Europe. 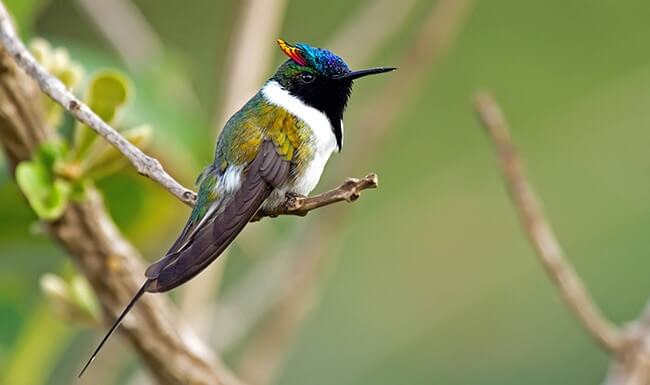 The rating is ended by a bird of the smallest and most beautiful birds which is the Horned sungem. Like all birds of this family, it has a bright and eye-catching color. The plumage is copper-green. The throat and the front of the neck are deep velvety black. The abdomen is white. The body length of one of the smallest birds in the world is about 12 centimeters. Inhabits the steppes of the Brazilian province of Minas Gerais.