Top 10 most unusual amphibians in the world

Unusual amphibians: According to the data, the ocean is not explored by 95%. Many are attracted to space and distant planets, but people do not think about what might be hiding in the depths of the ocean on their planet!

The thing is that the ocean is much more difficult to explore – for example, conditions at a depth of 5 km are more aggressive than in space. And even if experts go in search of something interesting in the depths of the waters, because of the powerful searchlights, the whole fauna will be scared away. Underwater life is amazing and we don’t know much about it.

If many underwater inhabitants are inaccessible to us, then it is quite possible to “catch” amphibians. Look at the animals from this collection, perhaps you will learn about many of them for the first time. What an amazing world surrounds us!

These are the top 10 most unusual amphibians in the world 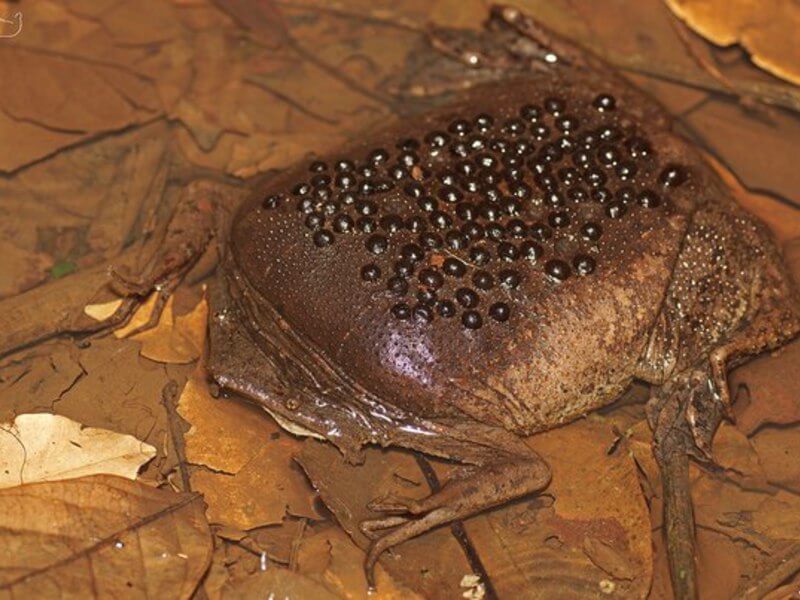 This unique frog carries offspring on its back for three months. It is found in South America as well as in the Amazon rainforest.

The peculiarity of the frog is its appearance – it looks “flattened” as if it has fallen under a skating rink. It can easily be confused with a tree leaf that has long fallen to the ground. Its head is as flattened as its body.

If you look closely, the Common Surinam toad has small eyes. It doesn’t have teeth or a tongue, but it does have tentacle-like patches of skin around the corners of its mouth. Underwater, this amphibian feels confident, lives in warm and turbid reservoirs. 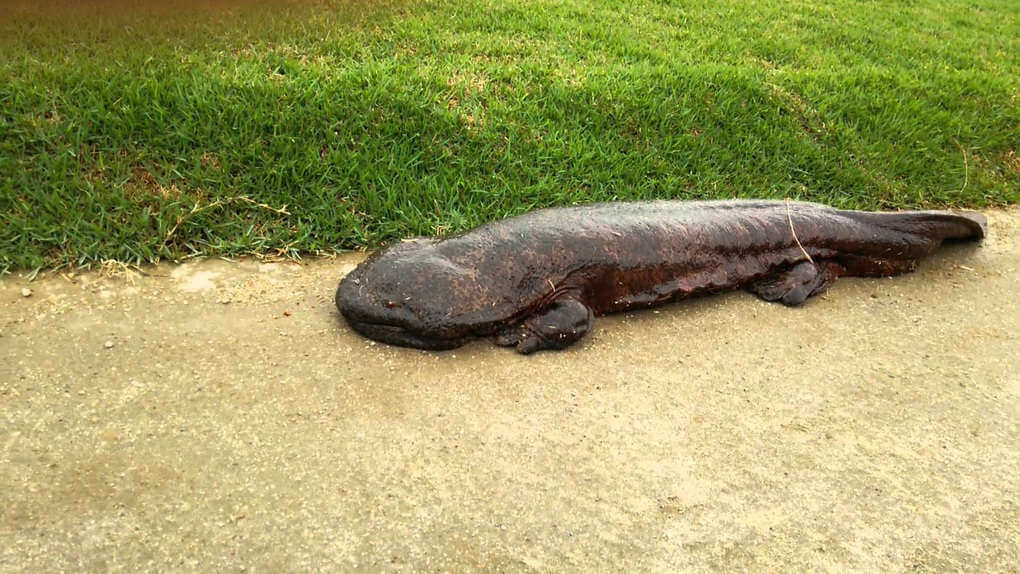 In appearance, it is very similar to a lizard. This Japanese giant salamander is the largest amphibian on our planet, its body length reaches one and a half meters, and an adult amphibian weighs almost about 35 kg.

The giant salamander has a slow metabolism, so it feels quite comfortable without food for a long time.

This amphibian has poor eyesight, which affected the development of other organs, the salamander has good hearing and smell. This animal has one interesting feature which is the ability to regenerate tissues. 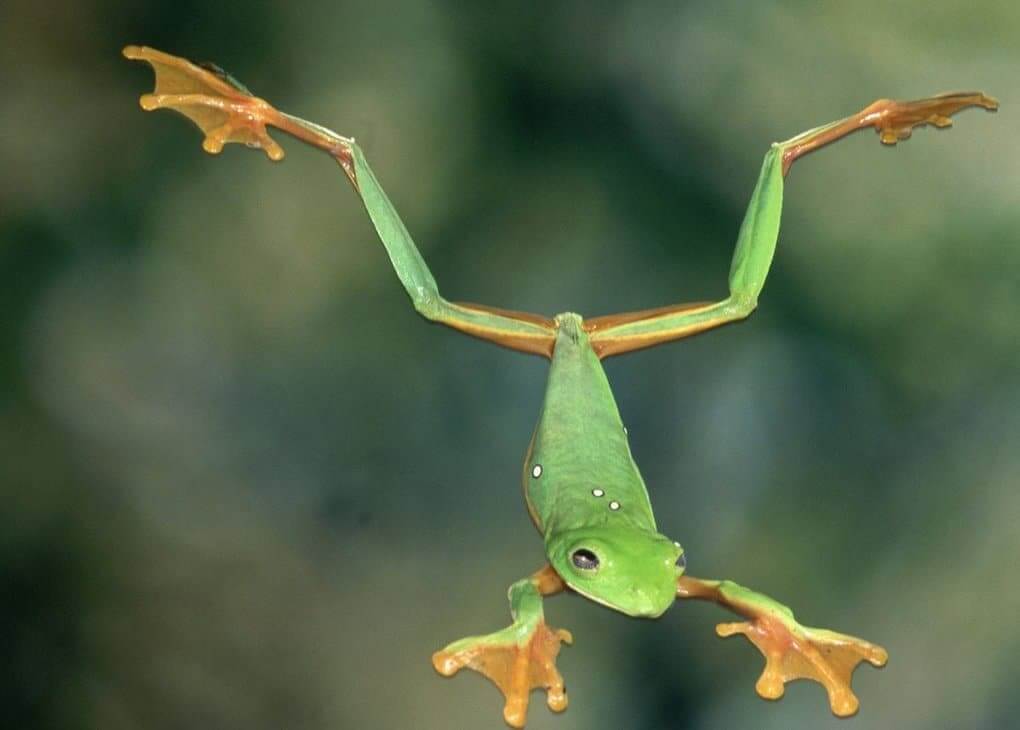 You’ve probably heard the phrase “Born to crawl can’t fly,” which is probably true, but unless you’re talking about a Black-webbed tree frog (flying frog)!

Of course, it can not fully fly, only birds are capable of this, but, using its adaptation, it can easily take off thanks to its membranes, which are located on 4 legs.

It lives in bamboo thickets, humid jungles, and prefers mountain forests (but less often). The frog shows its activity at night, during the daytime it enters a state resembling sleep. 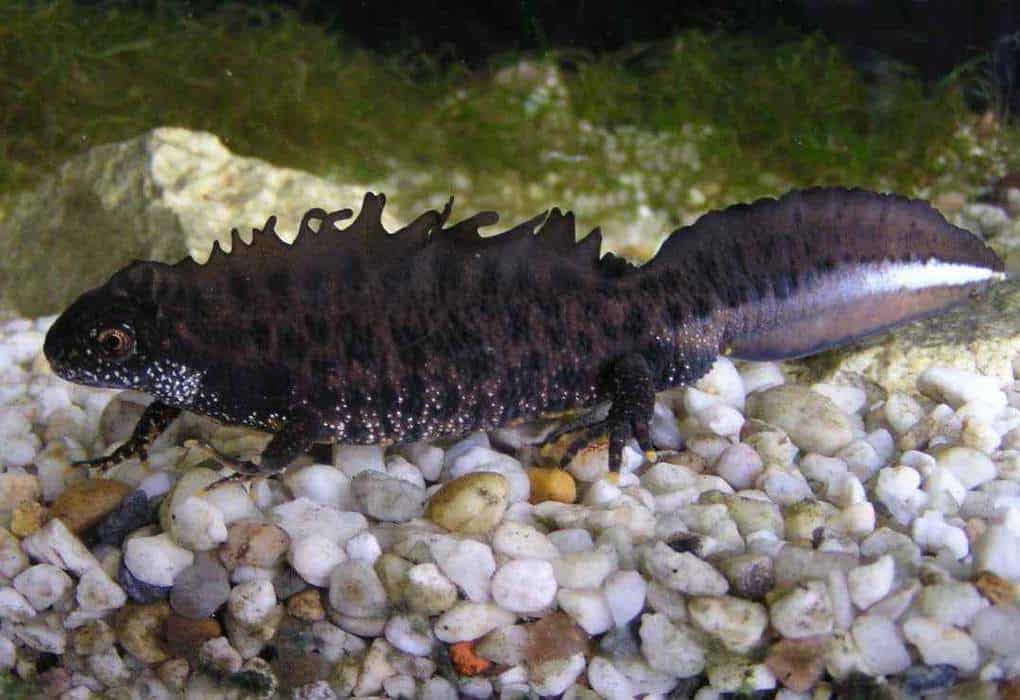 A tailed amphibian of a very attractive appearance was named after the ancient Greek sea deity Triton. In nature, it can be found in Eastern Europe, as well as in Russia. 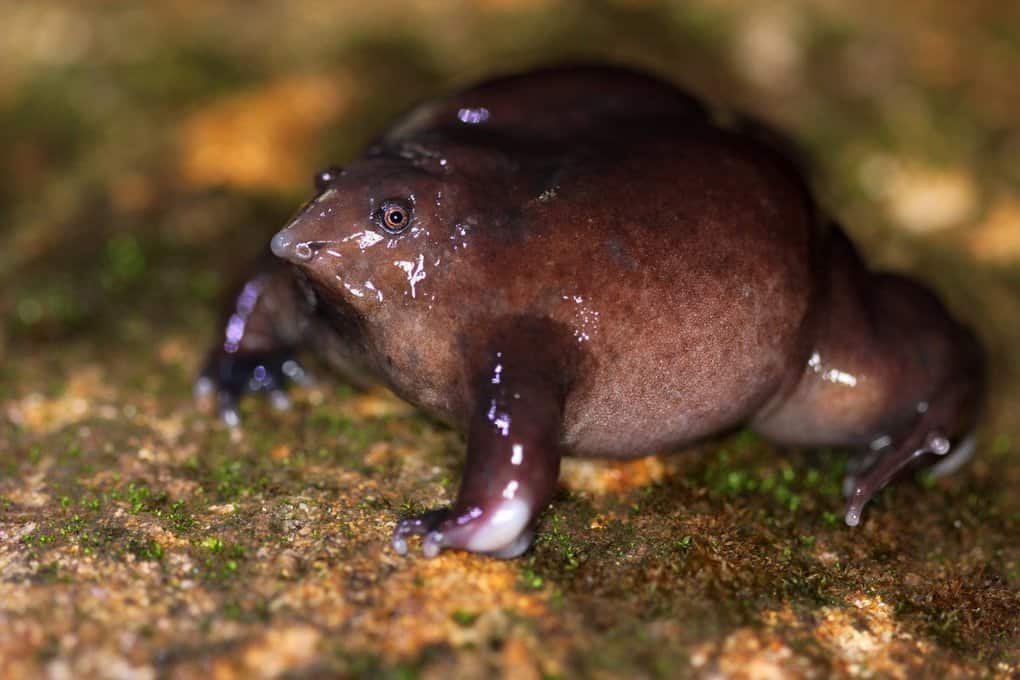 A “strange” frog that was not noticed for a long time – it was discovered only in 2003. This is since the amphibian leads a “reclusive” life most of its time, hiding in burrows and pits.

In appearance, it does not look like a frog – the Purple frog has a very small head with a slightly pointed muzzle, and the body is large and looks like a shapeless mass of iron.

The amphibian is no more than 9 cm long, in just a couple of minutes, the frog can dig a hole 3.7 m deep thanks to its hind and front legs. The frog very rarely crawls out of hiding, as it sees almost nothing. 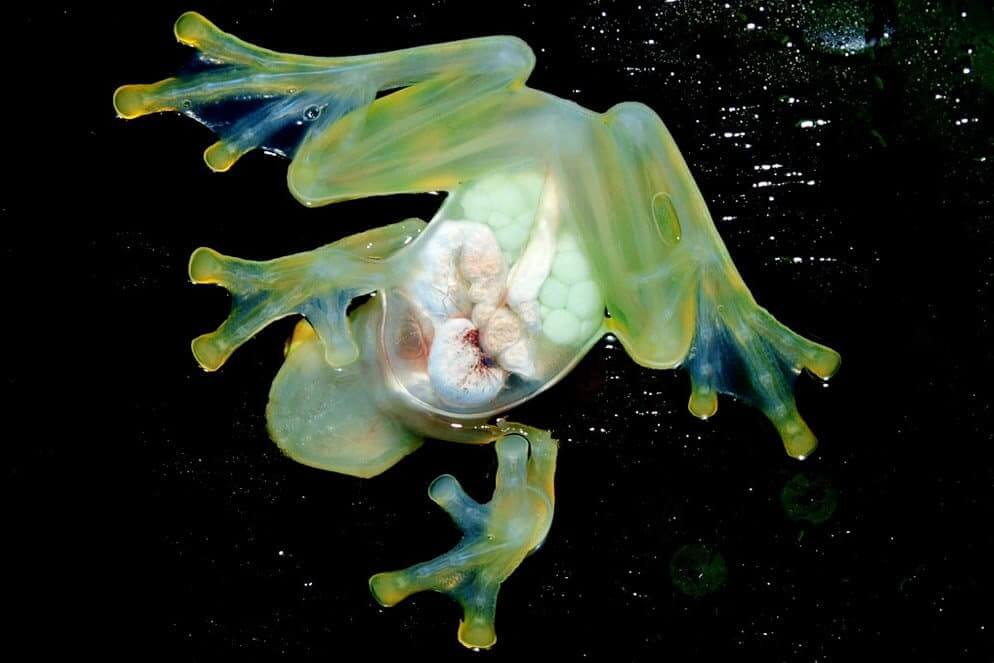 A real miracle of nature! Not only in the underwater world there are transparent animals, for example, such as opisthoproctus fish, crocodile fish, sea salps, etc., they also live on land, and even in the air (glass butterfly).

The glass frog’s internal organs are visible through its transparent skin. You can meet such a miracle in Central and South America, or more precisely – in the rainforests.

Looking at the frog, it seems that it is a craft made of glass, the work of a real master. So it is, only this master is not a people, but nature! 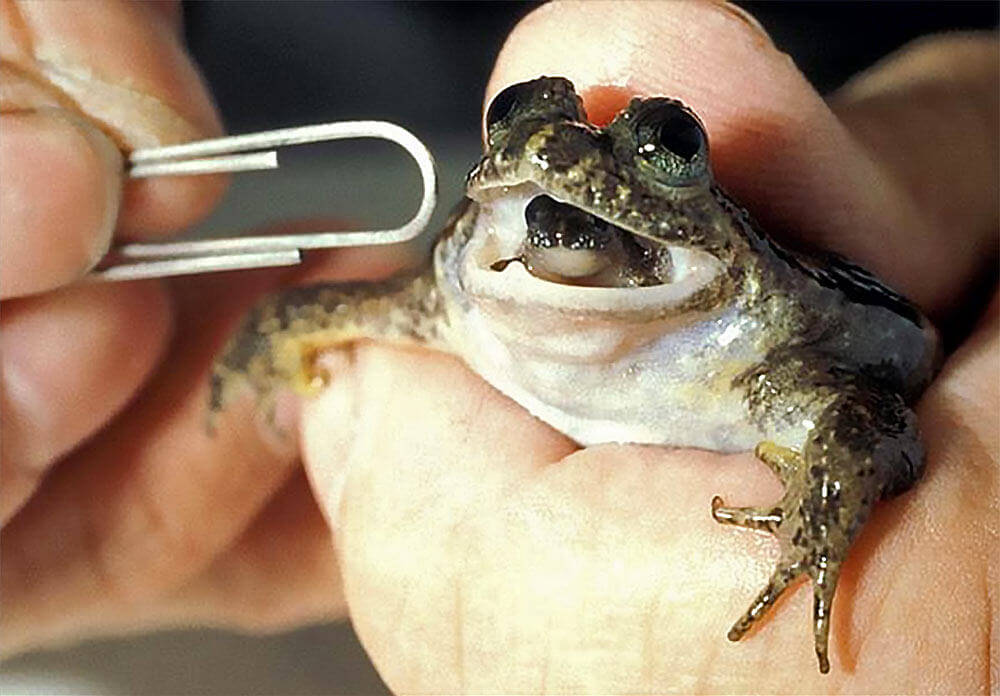 This amazing frog got its name because of its strange care for its froglet after it lays eggs, the adult female immediately swallows them.

A caring frog can block the production of gastric juice, and for 7 weeks its stomach turns into an incubator. During these weeks, the frog does not eat anything, the eggs burst, and the froglet develops in the stomach of a caring mother, after which they are “born again” from her mouth.

Unfortunately, this species of frog is dying out. This is due to their catching for sale in pet stores and the high level of pollution. 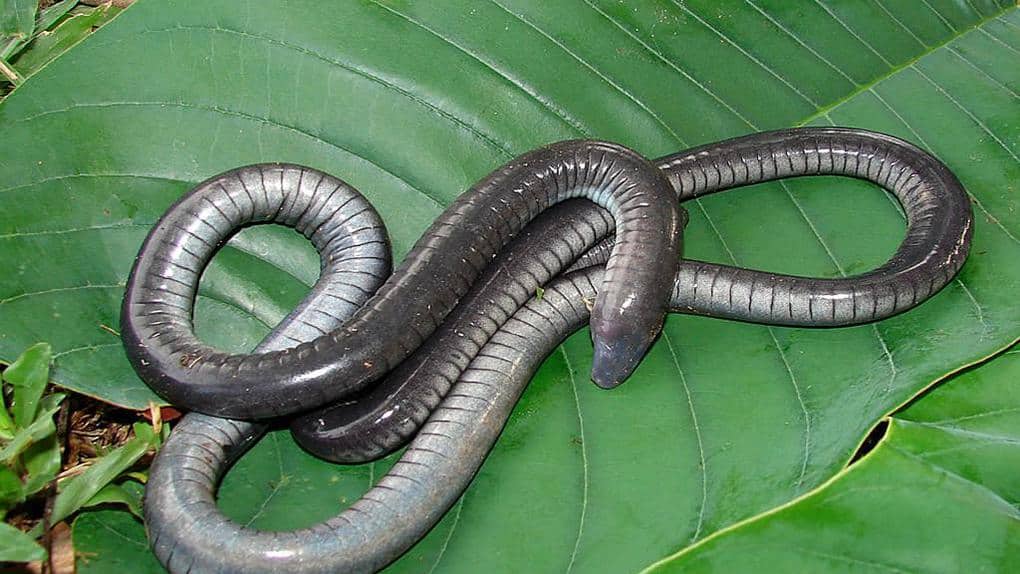 Almost everyone knows what Caeciliidae (worms) are. Some people are disgusted with them. But few people know that on our planet there are amphibians, which are almost indistinguishable from ordinary worms in appearance!

Scientists did not think much about their names and called them Caeciliidae. However, worms are very different from each other – first, the Caeciliidae sometimes reaches 45 cm in length, it has sharp teeth, and secondly, the worm is considered the most intelligent amphibian.

The Caeciliidae’s eyes are reduced, but their weakness is compensated by a sharp sense of smell, and the amphibian has a very developed sense of touch. 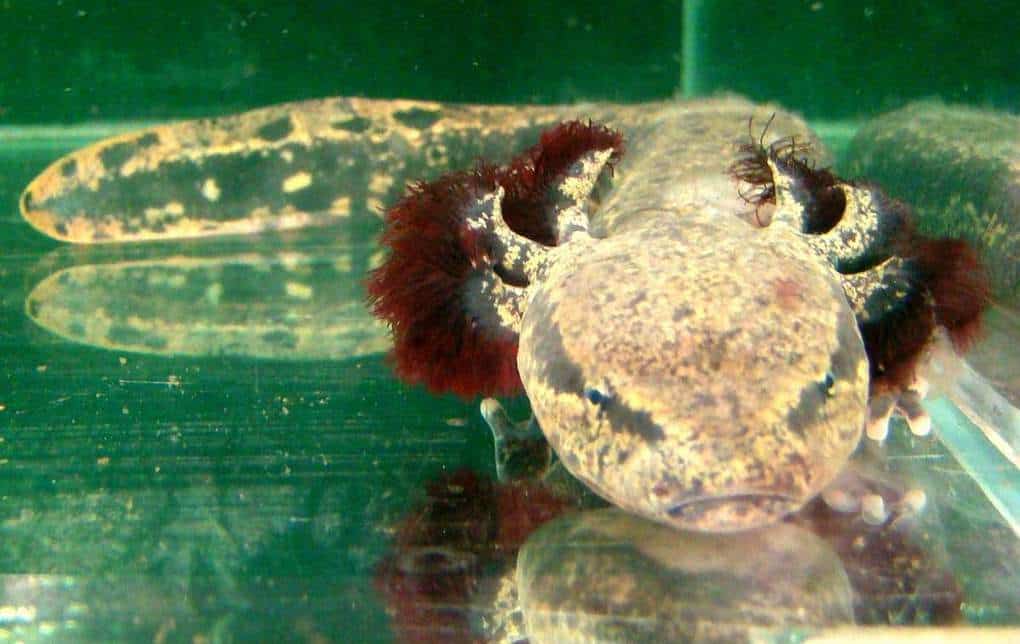 As the name implies, the Common mudpuppy is a fish “with legs” that lives mainly in North America.

It has a large tail and sometimes this amphibious animal reaches 43 cm in length. It is nocturnal, hunts invertebrates, and sometimes eats small fish.

It lives only in clear lake waters, with an approximate life span of 20 years. The animal makes amazing sounds – if you pull it out of the water, the amphibian will make a dog bark! 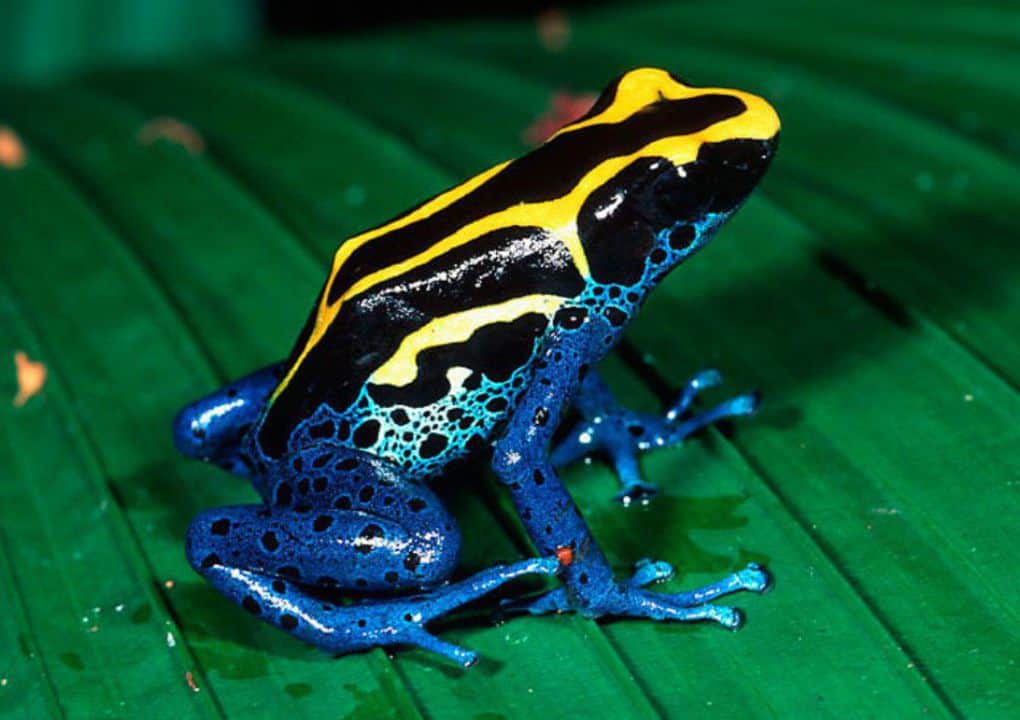 The yellow-blue frog, painted with black spots, is considered one of the most poisonous. But it is unlikely that anyone will come to mind, when meeting it, to think that the frog is poisonous, but such animals have their peculiarity.

Bright colors are a warning sign. In the glands of the skin of this small creature, a dangerous poison is produced is batrachotoxin, which paralyzes the heart and respiratory tract, both humans and animals.

But if you don’t touch the frog and pass it by, nothing will happen. Zimmerman’s poison frog never attacks people.