Top 10 most extended tongues in birds and animals

Most extended tongues: the animal world is diverse and impressive. Each animal has unique abilities and behaviors – bats, for example, are guided by hearing in the dark, catching insects, getting food for themselves, and bears go into “hibernation”.

The tongue is an essential part of the body in swallowing food. But its functions do not always end there, or instead, not for everyone.

Some animals and birds use their language as a tool; it helps them to get food for themselves and ensure their survival. Depending on the type of activity, this part of the body can have a different shape and size.

In this collection, we decided to tell you about the most extended tongues in birds and animals worldwide. It is informative and will be interesting for everyone!

These are the top 10 most extended tongues in birds and animals. 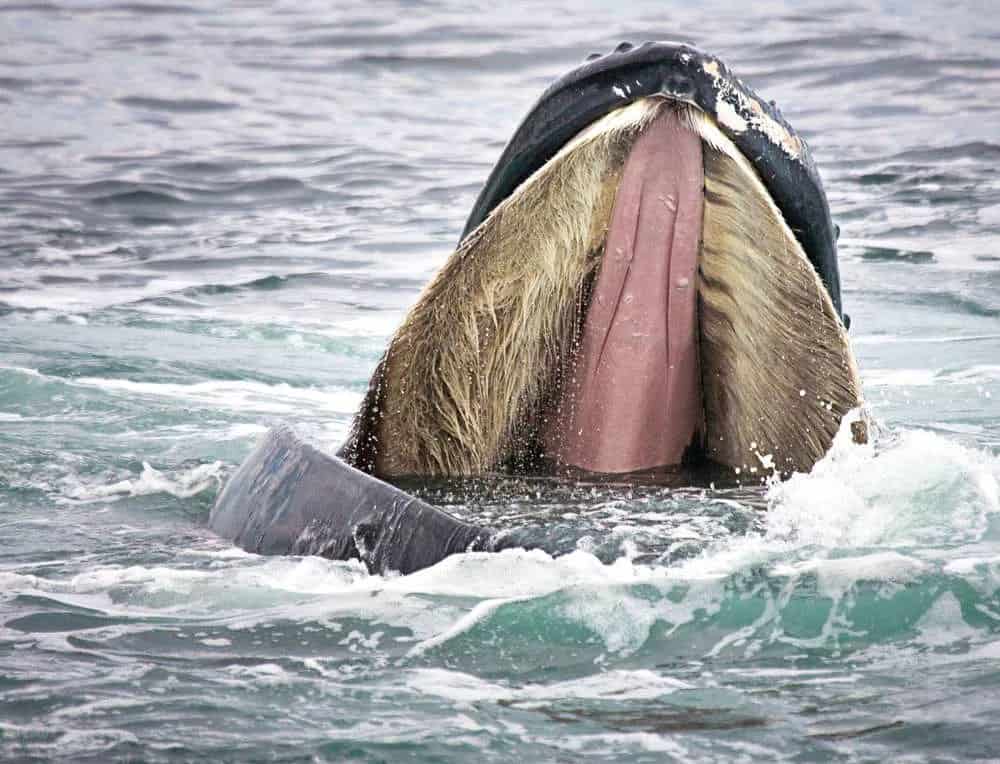 The most extensive tongue is found in the blue whale, which weighs 3 tons and reaches 3 meters. Sometimes the weight of the tongue reaches up to 6 tons! The animal looks quite unusual due to its characteristic appearance – on the lower part of the whale’s head, there are longitudinal stripes that continue on the belly and throat.

Note that 3 meters are not the length of the tongue, but the width, because the organ is a piston, the main task of which is to filter shrimp that enter its mouth with water.

The blue whale is the largest marine animal known to humanity, with an average weight of 150 tons. 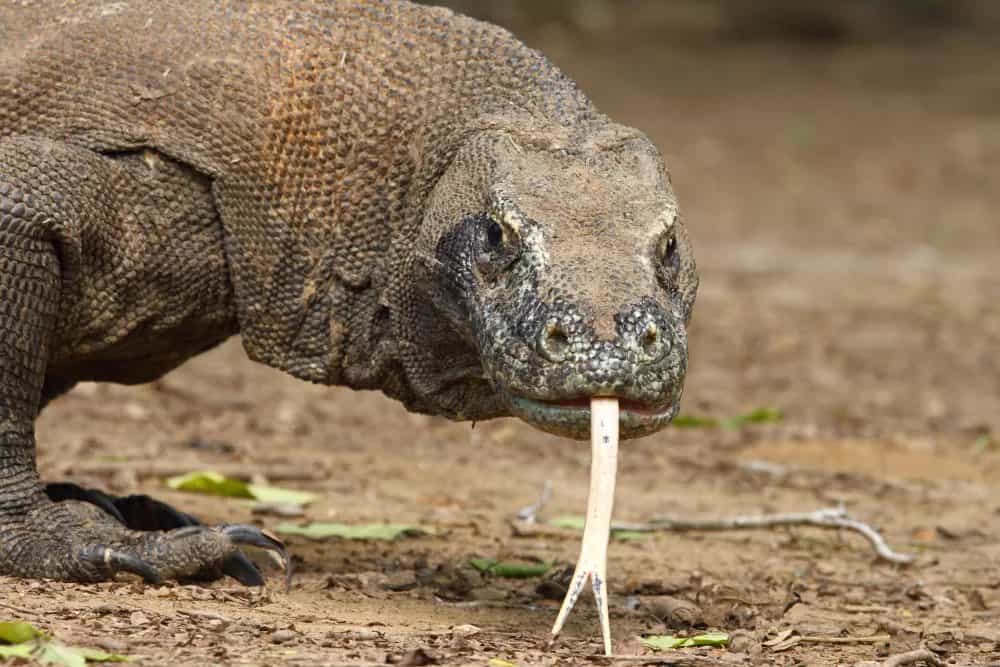 A fantastic animal with a tongue 70 cm long is called a Komodo monitor lizard (Scientific name: Varanus komodoensis). The lizard is the largest among reptiles and has impressive dimensions and a long tongue.

Monitor lizards can grow up to 3 meters and weigh 70 kg (this is their average weight). The lizard may look very cute, but the Komodo dragon is a predator, and they also have venom in their arsenal that is contained in their tongue.

The monitor lizard’s saliva contains rotting products, so the victim becomes infected after the bite. If the reptile bites someone, the victim is waiting for a fatal outcome because the venom gets into the bloodstream. 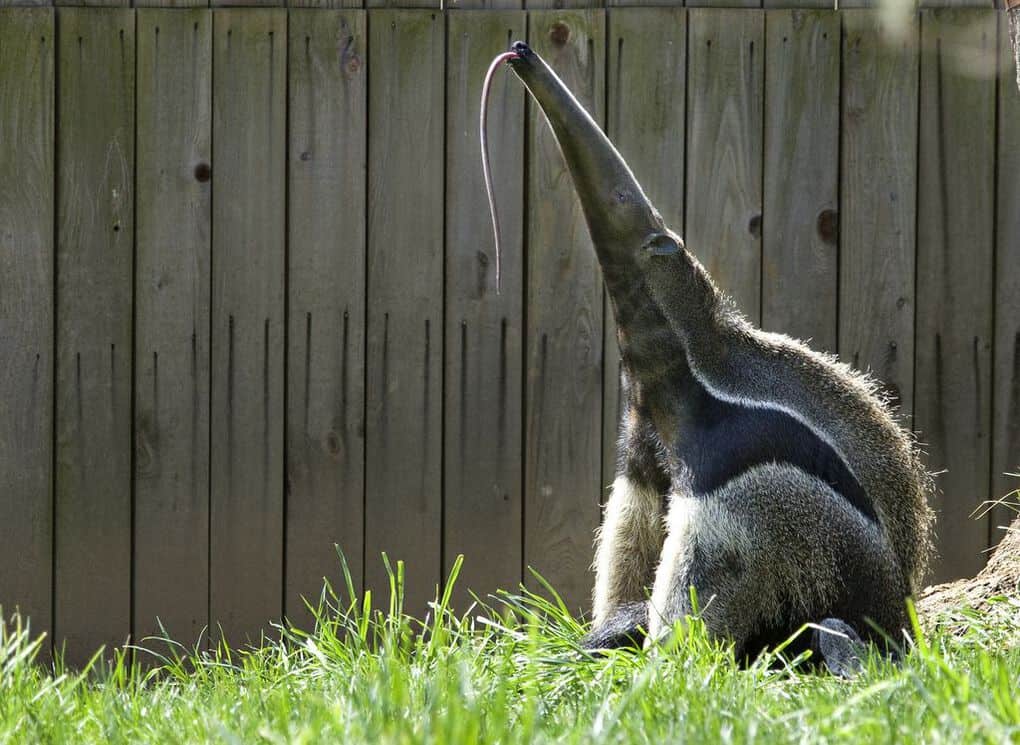 Anteater, scientists gave this name to the animal since it feeds on white ants (they are called termites).

The animal doesn’t have teeth, but it doesn’t need them. However, a long tongue reaching 60 cm is necessary for an anteater because it helps the animal get food. It is covered with a sticky substance, which “collects” insects. The animal launches its organ into the anthill, then removes it back into its mouth.

For reference: the anteater has a small mouth and a worm-like tongue. 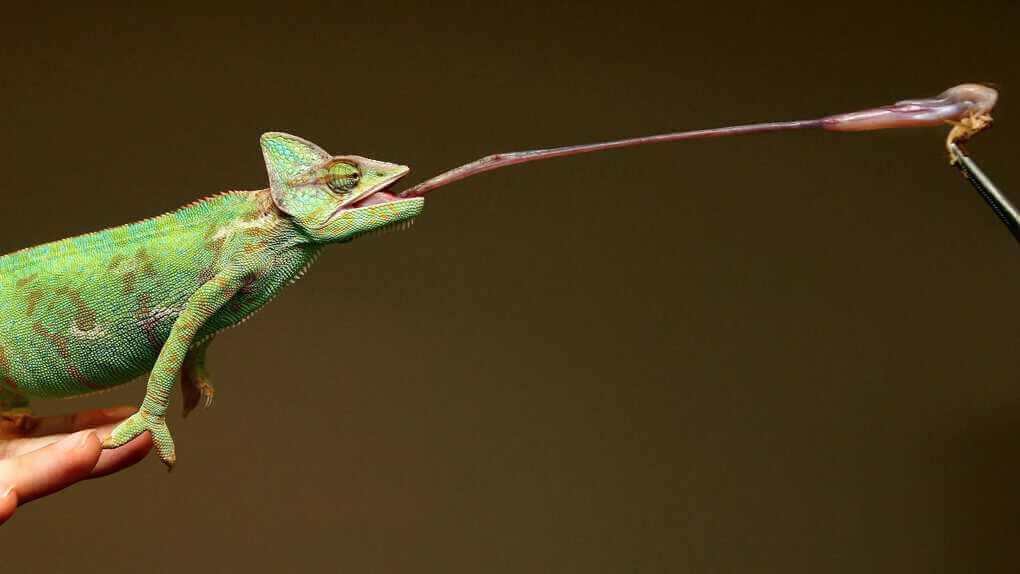 The chameleon‘s tongue is its weapon. An unusual chameleon changes its color and does it quite quickly, but another exciting feature is its tongue. As a rule, it corresponds to the height of the reptile, reaching 50 cm. The longer the chameleon, the longer its vital organ is.

The fact that its tongue is almost impossible to see is upsetting. The reptile sticks out its tongue and puts it back in for a second and a half, so you can only see it in the slow-motion video. With the help of a” shot ” of the tongue, the lizard catches food for itself in an instant. 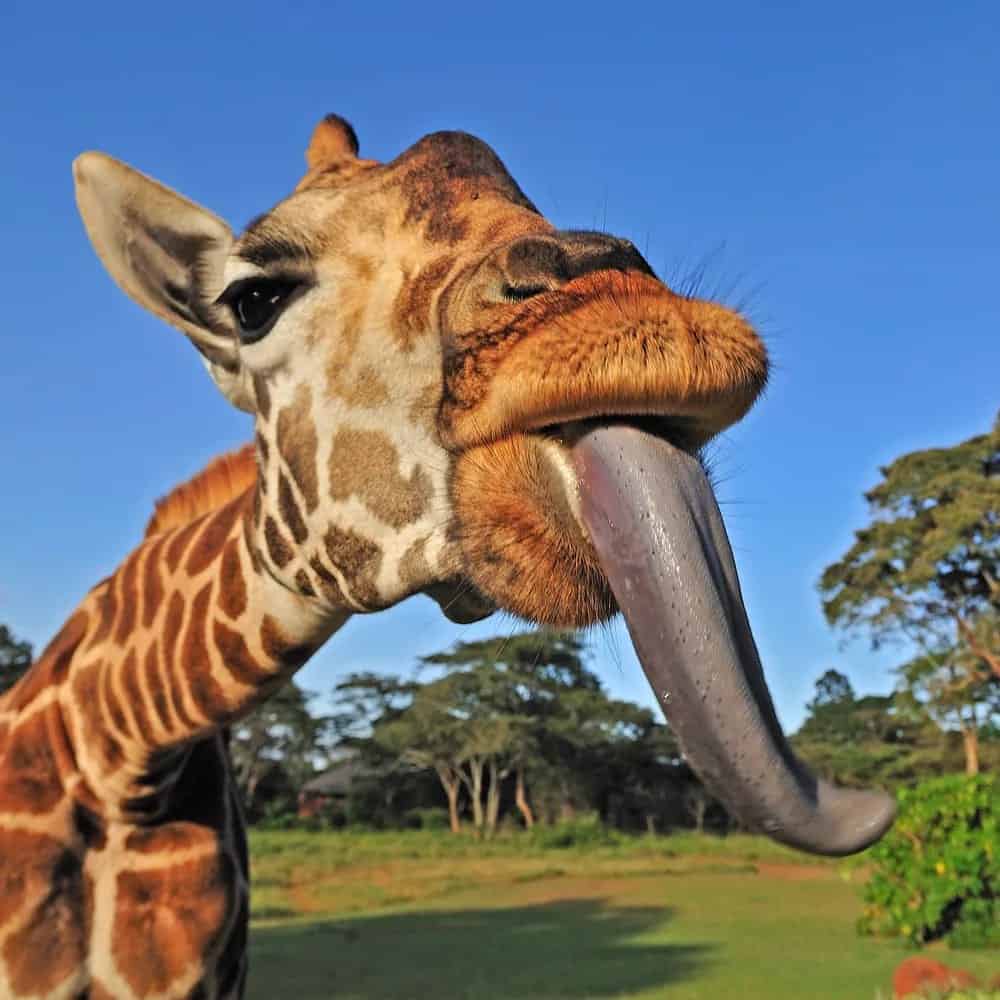 The giraffe is a tall animal, reaching 6.1 m. But oddly enough, the animal with the most significant growth on our beloved planet is not easy.

To reach the leaves (mainly acacia) and juicy tree tops, the giraffe has to stretch high, even above its height. And when it is at the goal, it sticks out its agile black tongue, reaching 45 cm. It helps the giraffe to easily and quickly cut off branches from the tree, and thanks to the structure of an essential organ, its tongue is protected from damage and thorns. 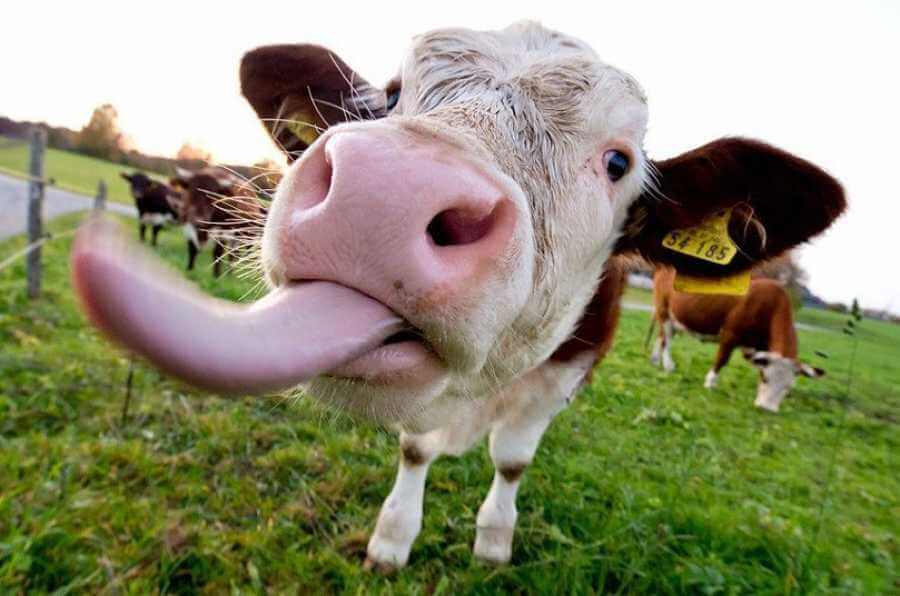 Calves do not have such a long tongue, but it depends on the breed and age. Surprisingly, the cow can reach its back with its tongue.

The long organ is designed so that the cow can grab and pluck herbaceous plants well. The animal mows plants thanks to incisors located on the lower jaw.

An interesting fact: people even have such a saying, “How the cow licked her tongue! “You can” get ” anything with such a long tongue. 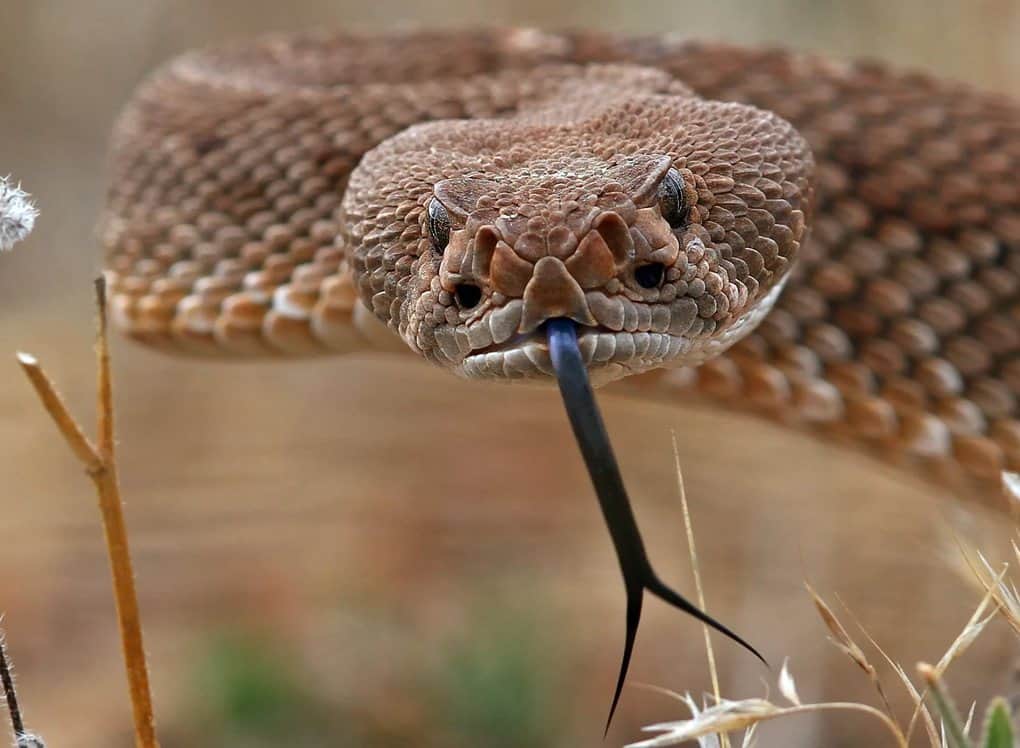 Snakes live on all continents; their tongue is their most important sense organ. It reaches 25 cm. Watching the snake, you notice it constantly sticks out its tongue and swings it in the air. What is the reason for this?

Scientists found that snakes do not see well and do not hear at all, and the tongue is the most important organ for them because, with its help, the reptile maintains contact with the surrounding world. The snake “tastes” what is nearby, catching even the smallest particles of smell. The tip of the snake’s tongue is forked to capture smelling molecules.

By getting information about the environment, the reptile can analyze it and find water, a trace of a victim, or a partner. For example, if a cat runs by, it will leave a trail of smell hanging in the air for several hours. Humans can’t smell it, but snakes can detect it ideally. 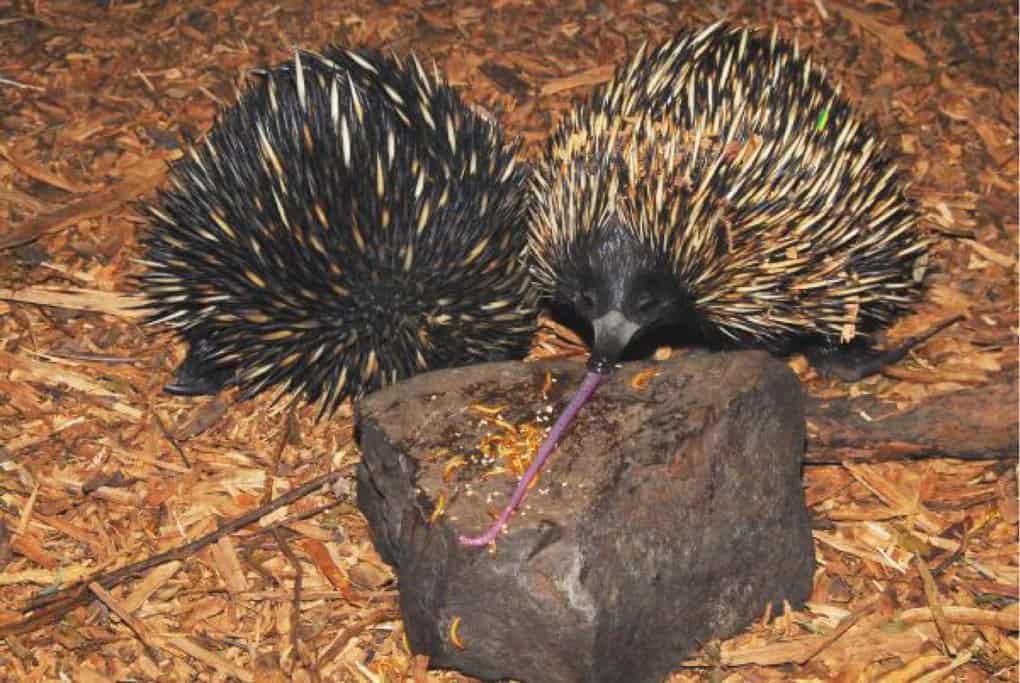 Australian fancy echidna is a kind of creation of nature! Externally, an echidna can easily be confused with a hedgehog because its body is covered with needles.

It is still unknown exactly where these fantastic animals came from, and questions about their life remain open. The tongue of the echidna reaches 20 cm and has a sticky surface.

By the way, the animal prefers a solitary and nocturnal lifestyle and independently gets its food and prey: ants, worms, shellfish, and echidna catches with its long tongue – it sticks it out and then draws it in. Food is held on the tongue due to its sticky surface and then swallowed. 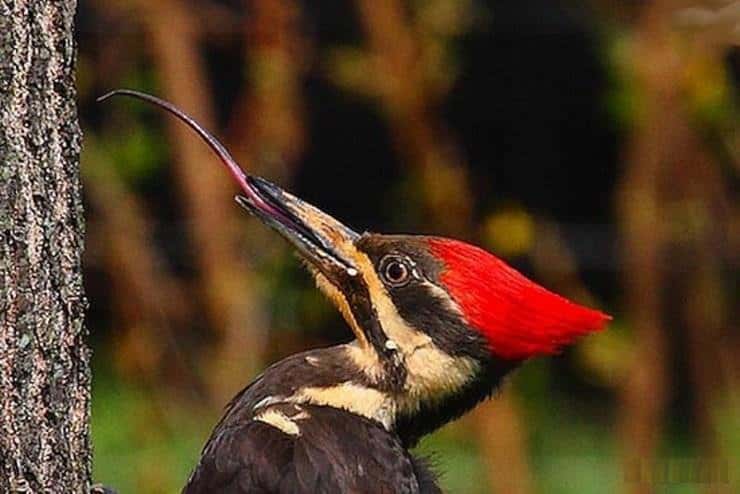 What do you think is the longest-tongued bird? It turns out that the woodpecker has the most extended tongue among birds, reaching 20 cm.

Its structure is interesting – with the help of a functional organ, the bird gets insects that live in the crevices of trees: caterpillars, beetles, etc. The bird’s beak does not exceed 5 cm, and the tongue reaches 20 cm.

Fun fact: the tongue of a woodpecker grows out of the right nostril, and the beak can’t hide it completely, so it goes under the scalp and wraps around the skull. When the woodpecker’s tongue is retracted, the hyoid apparatus is relaxed, thus forming a loop under the skin. When the muscles of the organ contract, the hyoid is pulled up to the base of the skull, after which the tip of the tongue shoots far ahead. 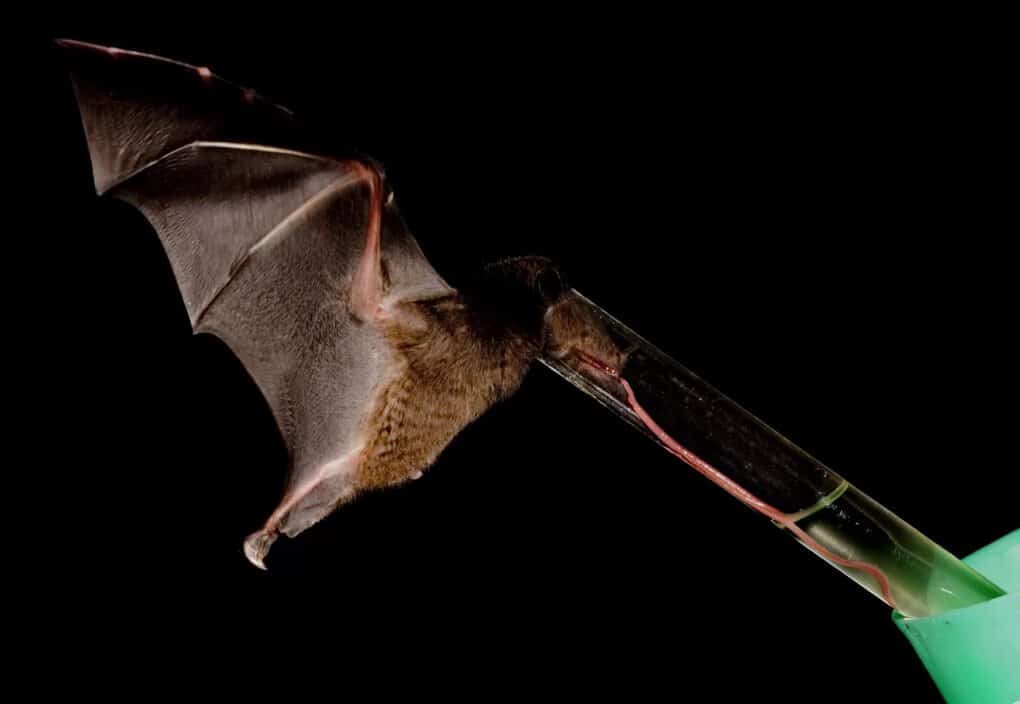 Nectar bat Interesting fact: stubbornly refused to show itself to biologists for many centuries, although in 2005, it was accidentally “caught”.

The mouse barely reaches a length of 5 cm, but its tongue reaches as much as 9 cm! This fact is recognized as a record for the living beings of our beautiful Earth.

Of course, such a long tongue serves a specific function – from a flower with a deep calyx, a nectar bat gets its food, as the name already implies – nectar.