Top 10 most amazing fish in the world

In all the waters of the globe, whether it is an ocean, sea, lake, or river, there are many many living beings. Many people have never even heard of the existence of some of them. For centuries, the study of aquatic fauna was impossible due to the lack of equipment.

The most famous explorer of the ocean, undoubtedly, is Jacques Yves Cousteau. After he invented scuba gear, a closer and more detailed study of the sea and ocean floor became possible. Based on his invention, many other devices for diving into the depths of the sea were developed.

Here are the 10 most amazing fish in the world. 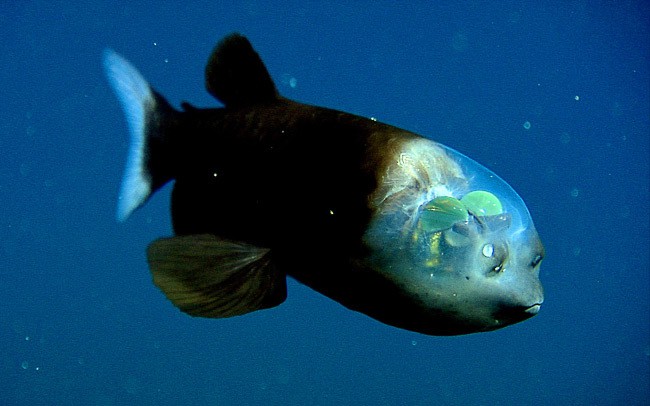 Barreleye fish is unusual in that it has a dome-shaped transparent formation in the head area, somewhat resembling a spacesuit. Although it was discovered in 1939, very little is known about it until today. One of the reasons, the habitat of this amazing fish, large sea depths is generally poorly understood. Until 2009, it was a mystery why the fish’s eyes were directed strictly upwards.

Previously discovered fish were caught in fishing nets, when climbing to the surface, the transparent shell on the fish’s head was destroyed or deformed, which is why the researchers came to incorrect conclusions. But observing the species in its natural environment has clarified this question. The transparent shell is filled with a special liquid that protects the visual organs. 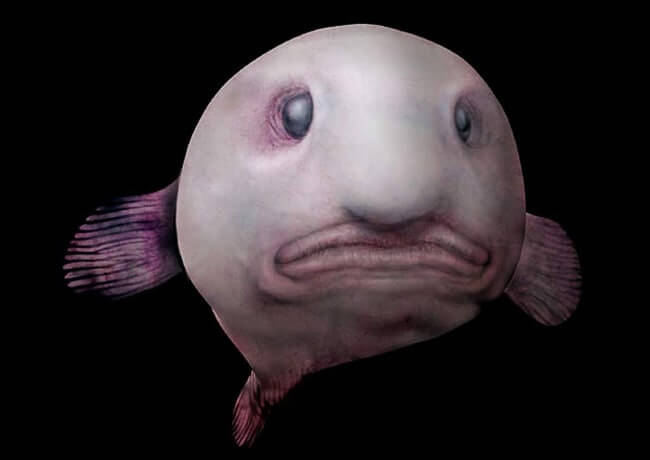 Blobfish is discovered in 1926, this fantastic denizen of the deep sea has been named the ugliest animal in the world. In the water, nothing yet, but on land, jelly is a prominent creature rather unpleasant. The weight of the fish can reach 10 kilograms, the length is about 50 centimeters. It usually feeds on plankton, small crustaceans, or shrimps.

It just lies on the bottom with its mouth open and waits for the victim to swim into it. Although scientists know very little about the reproduction of the “Blobfish“, it was revealed that it is a very caring parent. This type of fish protects its fry until they grow up and start finding food on their own. 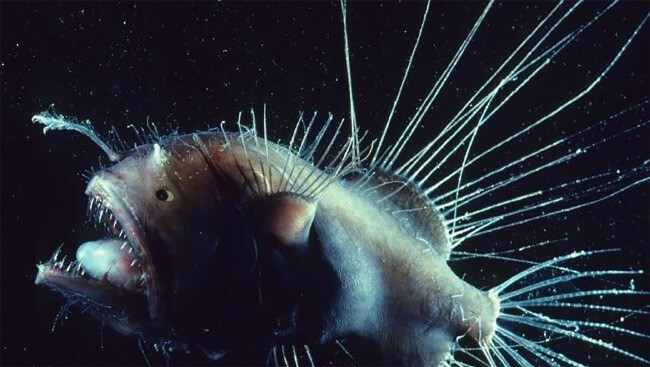 Hairy Fanfin, on the seabeds, especially at great depths, that live very strange and scary animals for the layman. One of them is the Hairy Fanfish, which belongs to the anglerfish family. At a depth of more than a kilometer, where sunlight does not pass, anglers attract potential prey with a glowing growth on the forehead.

Since there are not many animals at the depth, the fish rushes and eats everything that gets in the way, even more, fish from its own family. To do this, it has developed jaws and has sharp teeth. Harsh living conditions dictate their own rules, this even applies to reproduction, the male of this unique fish betrays its secretions to the female through blood. 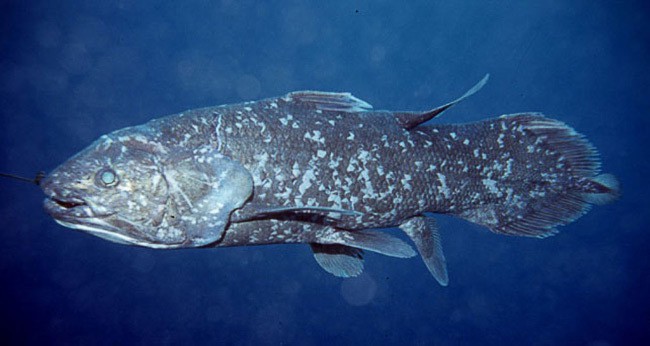 Indonesian coelacanth, Considered extinct until 1999, this amazing fish is the oldest species on the globe. There are two species of Latimeria on earth. Their divergence period is approximately 40 million years. To date, only a dozen fishes have been found. Until 2006, only four fishes were known, two were caught by fishermen and two more fish were observed from the bathyscaphe.

In 2007, a fifth fish was discovered. The fisherman who found it fenced it with a net in the shallow waters of the sea. The fish lived for about 15 hours, although it was believed that in the upper layers of the sea it lives no more than two hours. 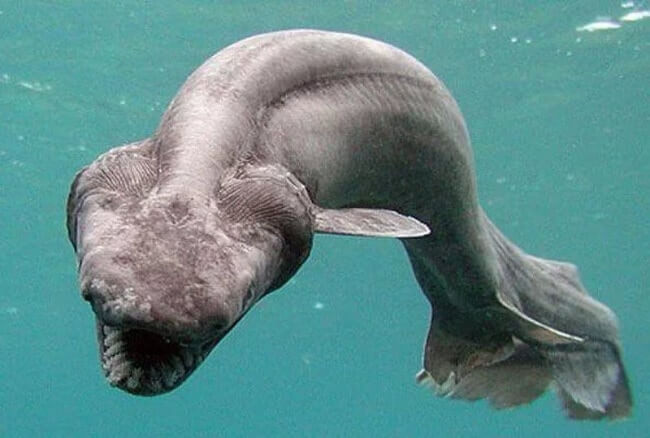 Frilled shark, Another, little-studied species of fish is the Frilled Bearer shark. This type of shark, discovered in 1884, looks more like a conger eel or a snake. This is a very rare species and their number is about one hundred sharks. The shark’s serpentine body is covered with stripes, these are gills hidden by the skin.

The shark has 12 teeth, six on each side. The first pair is interconnected and forms a single cavity. Like other fishes, the Frilled Bear’s jaw is dotted with teeth, but not small ones in several rows. 12 pairs of teeth, each of which is something like a Christmas tree branch, with many sharp formations.

Long-nosed chimaeras, even though the fish was discovered more than a century ago, are extremely poorly understood. Maybe because of its disgusting jelly-like appearance. The chimera’s habitat is the bottom of the Atlantic Ocean. It lies motionless at a depth of about 1.5 kilometers, buried in the sand.

The diet of this kind of fish is made up of shellfish, as well as everything that floats by. It leads to a very sedentary lifestyle. 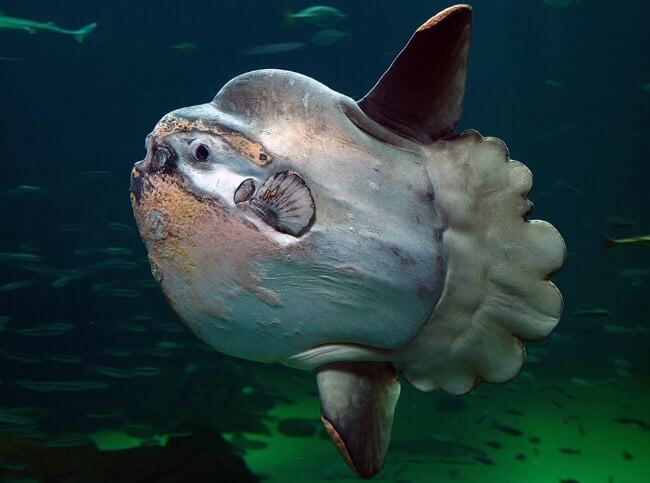 Ocean sunfish, This type of unusual fish was discovered in 1758. The fish was named so because of its body shape. It resembles a disk, the fish is flattened from the sides. The tail is almost invisible, all the fins fused. The Ocean sunfish is very unsuitable for physical exertion, adults can not overcome a strong current.

The fish can grow to a gigantic size and weigh more than one and a half tons. Therefore, in addition to plankton, the Ocean sunfish’s diet also includes jellyfish, eel larvae, and squid. Depending on its habitat, it can also feed on salps (underwater “lanterns”), eel larvae, and ctenophores. 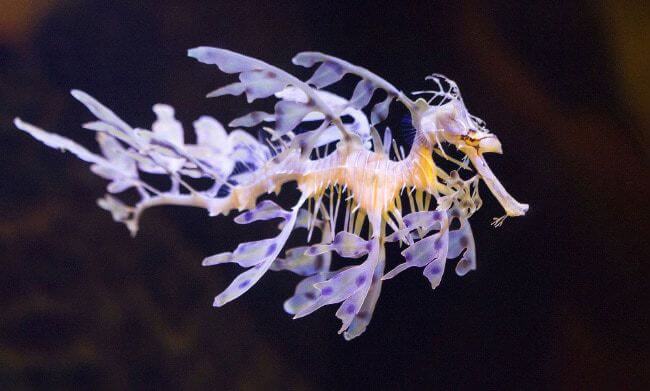 Leafy seadragon, This amazing fish got its name due to its camouflage uniforms. All over the body and head, some appendages resemble the leaves of algae. Some may confuse them with fins, although they have some similarities, they serve exclusively for camouflage. So it hunts small shrimps and hides from other predators.

This species of fish lives off the coast of Australia in the waters of the Indian Ocean. The fish’s diet also includes plankton and algae, among which it actually lives. It has no teeth, so it swallows its prey whole. 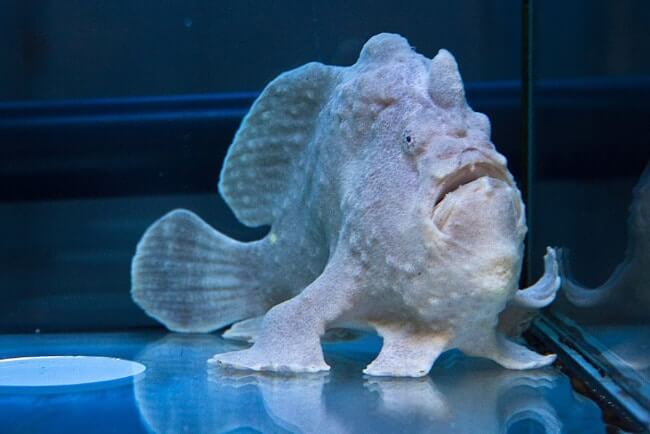 Frogfish, The view was opened quite recently, in 2009. It’s hard to believe that there are still unknown animal species in the 21st century. From the name alone, it becomes clear that this is an unusual fish. It is painted bright orange with white stripes. It is the direction of the stripes that justifies the first part of this name.

A “frog” because the fins and tail of a fish are more like the legs of an animal than a fin. The blue eyes of the fish are directed in front, which gives the impression that it is a mammalian animal. Thanks to its fins, it can crawl along the bottom, as well as push off and move in leaps. 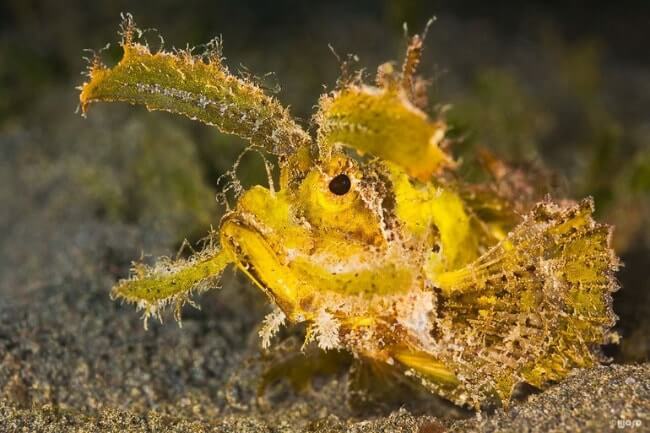 Scorpena Ambona, This fish lives at the bottom of sea waters. It spends most of its life buried in the sand, so it disguises itself and hunts. This amazing fish is easily recognized by its bright yellow color, sometimes turning into pale purple. It can change color, which is a necessary quality for disguise.

And animals are disguised not only to hunt but also to protect themselves from other predators. It was first discovered in 1856. Allocate its growths over the eyes in the form of eyebrows. Once you see it, you will not confuse this extravagant look with anything else.