Top 10 largest turtles in the world

by Sprintally 8 months ago8 months ago
1.5kviews
0
Share via
115 shares

Largest Turtles: Turtles are one of the oldest reptile species. These are unique animals that can survive in the harshest conditions of existence. Some species are well adapted to low temperatures, others to high temperatures. Some subspecies of reptiles can live without food and water for several years, and some can live without oxygen for more than 10 hours. Also striking are their sizes, which can be as small as a few centimeters or reach 1-2 meters or more. 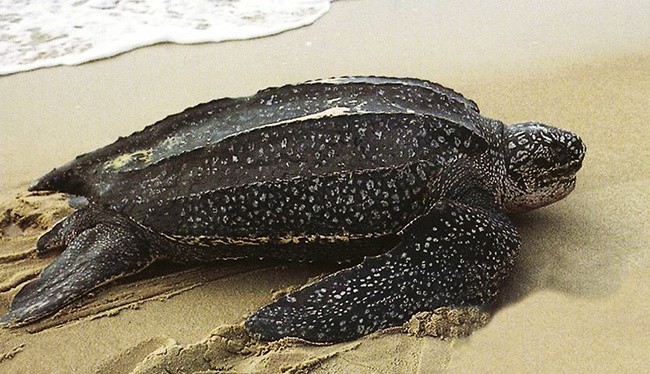 The leatherback turtle (2 m) is the largest species of turtle in the world. The average length of this species is 2 meters. The body of one of the turtles measured 2.6 m! The mass of the turtle reaches 600 kg. The giant lives in the Atlantic and Pacific oceans. It feeds mainly on marine life. With such an impressive size, the life expectancy of animals is relatively short: 20-30 years. The largest turtle species in the world are listed in the Red Book and are under protection.

An animal of this species is listed in the Guinness Book of Records, which scientists gave the name Archelon. The Archelon was over 4 meters long and weighed about 2 tons. This is the largest turtle known to the world. 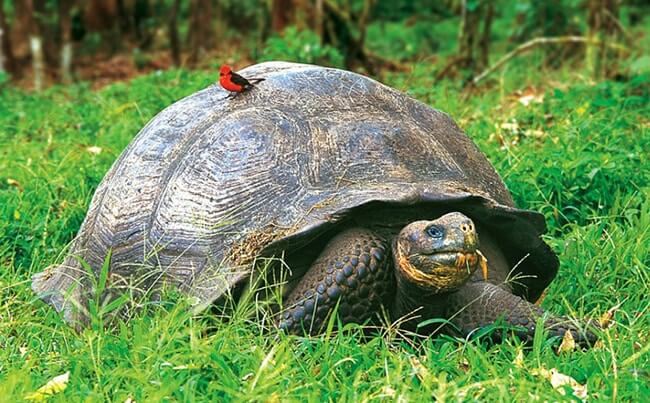 The Galapagos elephant turtle (180 cm) is a real land giant. Its length exceeds 180 cm, and its weight reaches 400 kg! These turtles live in the Galapagos Islands and feed on plants and shrubs that are considered poisonous. Currently, this species is listed in the Red Book, as it is endangered.

Until recently, there were 11 subspecies of this animal. In 2012, the only turtle of the eleventh subspecies, which was nicknamed Lonely George, died. The turtle died at the age of 100 without having offspring. These elephant turtle species can live up to 200 years of age. 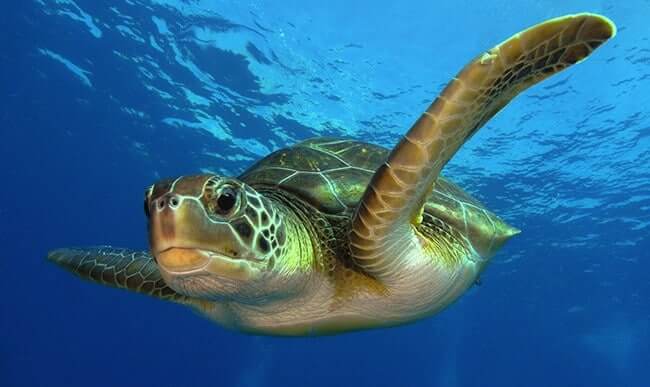 “Green Sea Turtle” (150 cm) opens the top three of the most giant tortoises in the world. The length of the Green Sea Turtle is 150 cm, and the weight can reach 200 kg. The animal got its name because of its olive-green color, but turtles with a dark brown color are often found.

Giants live in the Pacific and Atlantic oceans. The turtle is also called a soup turtle since its meat was used to prepare the first course. But due to active hunting for the species, their number has decreased significantly. Therefore, hunting for green turtles is currently prohibited. On average, a turtle lives for 80 years. 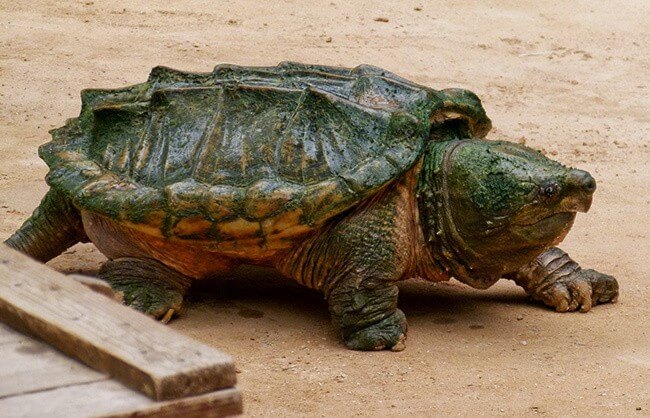 The Alligator Snapping Turtle (140 cm) is similar in appearance to the Cayman Turtle but much larger. The average size of the animal’s shell is 140 cm. The species is common in the southeastern United States. Their mass is relatively small and reaches 60 kg. Freshwater animals feed mainly on fish.

In favorable conditions, some turtles live up to 80 years. The turtle is considered to be very aggressive, especially males during the breeding season. If the giant doesn’t like something, he can bite. This type of meat is used to make turtle soup. This is one of the largest, but lightweight turtles. 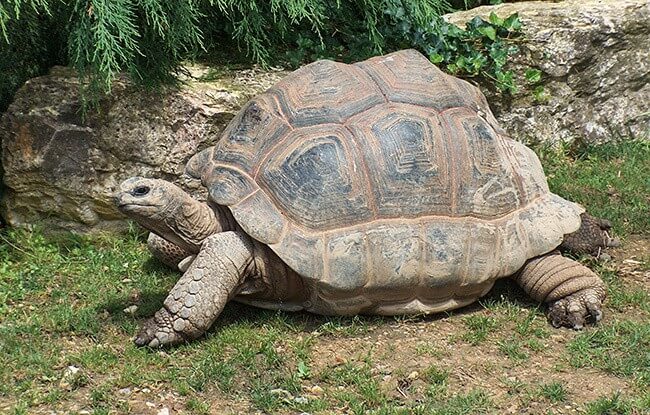 The Aldabra giant tortoise or Adwaita (120 cm) is a rare species of land turtles. The average size of a land animal is 120cm. The habitat is the island of Aldabra. There they can be found in open spaces overgrown with tall grass and shrubs. Giant turtles feed mainly on grass. In captivity, turtles can live up to 150 years. Turtle Adwaita is the oldest turtle of this animal species: it died at the age of 250 years. Therefore, it is not only one of the largest species of turtles, but also one of the records for longevity. 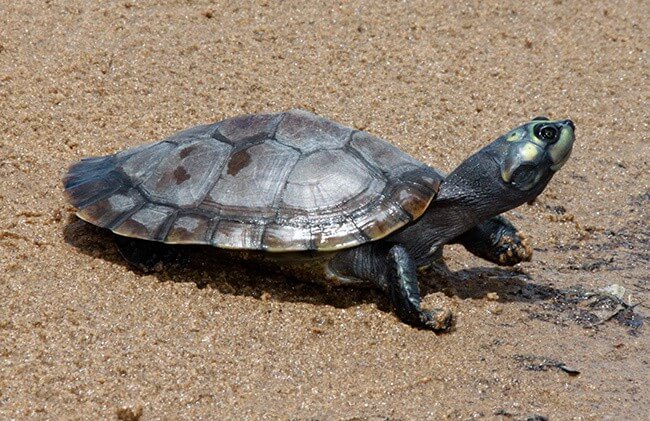 Arrau turtle (1m) is one of the largest freshwater animals found in Brazil, Bolivia, and other northern countries. The average length of an adult turtle is 1 meter or more. The turtle feeds on a variety of plants and insects. Arrau weighs about 70 kg. This species is now being actively studied in the wild, but there is still no data on the lifespan of the Arrau turtle. 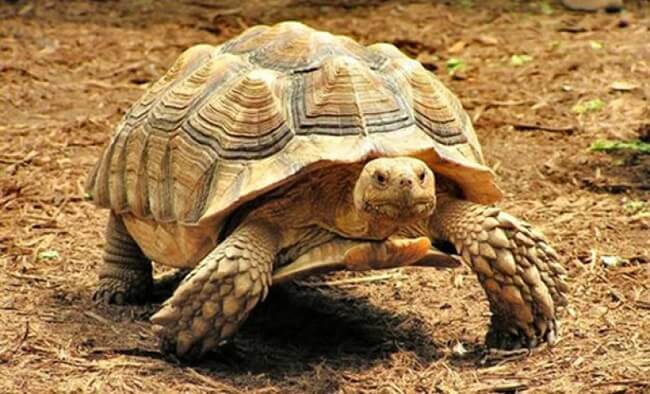 The African spurred tortoise (75 cm) is one of the largest land turtles. The average size of the shell of this species is 75 cm. There is evidence that the tortoise can reach up to 1 m in length of the shell. The weight of the female is about 60 kg, of the males – 100 kg. The habitat of the amphibian giants is the deserts of Africa.

Basically, these are herbivores that can easily go without water for a long time. They grow very quickly and reach the indicated sizes by the age of 20. The number of species has recently been decreasing due to hunting for them and the destruction of habitats. In captivity, turtles can live for more than 50 years. 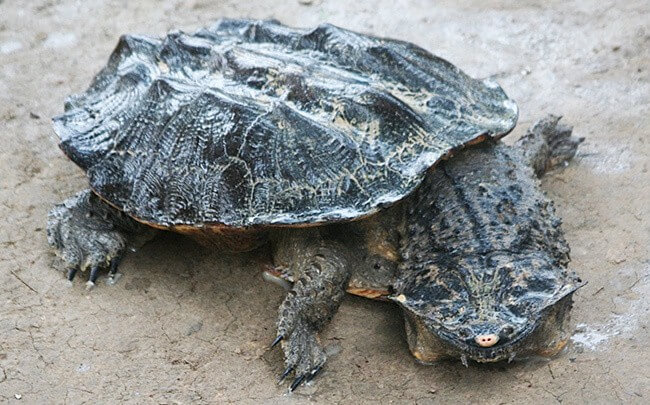 Fringed turtle (40 cm) belongs to the Chelidae family. This species has a rather peculiar and bizarre appearance: a large, triangular head, a nose in the form of a long process, a thin and long neck, and the carapace is a pyramidal shape with growths. The length of the carapace reaches 40 cm, and the weight of an adult is 15 kg.

Another name for the turtle is matamata. The species is common in South America, Brazil, Peru, and many other eastern and northern countries. Choosing a habitat with stagnant water. This species prefers to feed exclusively on fish. Under ideal conditions, mats can live up to 40-75 years. 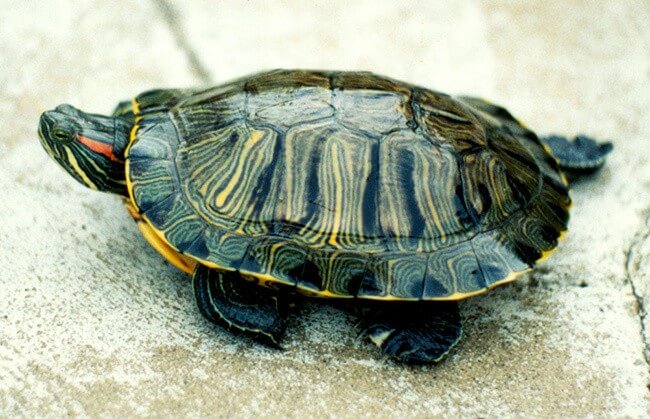 The Red-eared slider turtle (37 cm) is a species of freshwater turtles that is common in America and Mexico. Females are noticeably larger than males: the length of the shell in females is 37 cm, and in males – 20 cm. The turtle got its name because of the red spots located on the side of the head.

The animal chooses a place to live in swampy, muddy reservoirs. Turtles prefer to lead a sedentary lifestyle, but in the presence of danger, they react very quickly and quickly hide. They easily adapt to life in captivity and, with proper grooming, can live up to 50 years. To contain them, you need a 200-liter aquarium. 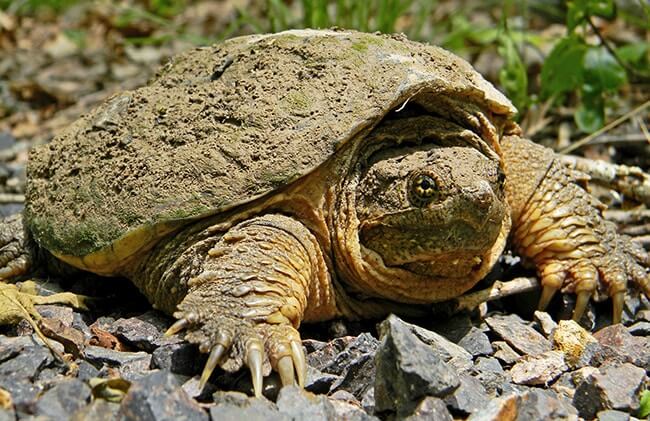 The Cayman Turtle (35 cm) is one of the smallest in size, among the largest. Their length can reach 35 cm. The weight of the animal is 14 kg. Some turtles can weigh up to 30 kg. This species is common in Canada, as well as in the Eastern and Central regions of the United States.

The habitat is reservoirs where there is a lot of silt. This makes it easy for turtles to burrow for the winter, where they hibernate. At the same time, this species is resistant to cold and can move both under ice and on ice in the cold season. Cayman Turtle feeds on small animals of the underwater world, including carrion. The cayman species are often hunted in the United States, as the meat of these turtles is quite popular and edible among the locals.