Archaeology discoveries: Archaeology is one of the most amazing sciences because it allows us to learn many unknown (and sometimes even previously unimaginable) details of human history through the piecemeal remnants of material culture.

An archaeologist is almost a detective, and a criminologist rolled into one. From a couple of bones and a rusty piece of metal, they can tell what happened at this place hundreds, even thousands of years ago.

Our rich history gradually reveals itself: sometimes, a significant discovery alone takes a lot of moral and physical strength and time. So, in the end, the results are more valuable and exciting. 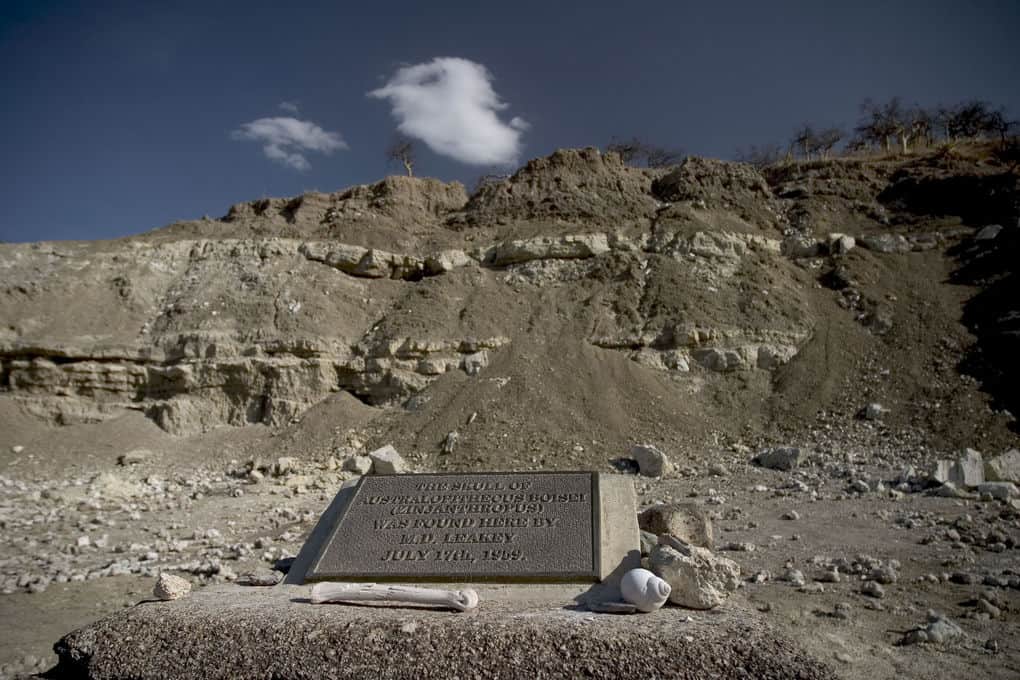 The Olduvai Gorge (a 40-kilometer-long crevice stretching along the Serengeti plains in Tanzania, 20 km from Ngorongoro Crater) is where famous archaeologists Louis and Mary Leakey discovered the bones of the predecessor of modern man, homo habilis, in the late 1950s and early 1960s. habilis), the remains of an earlier great ape species (Australopithecus) and a much later Pithecanthropus.

The oldest remains are more than 4 million years old. That is why Olduvai is considered almost the “cradle of humanity”. By the way, in 1976, Mary Leakey and Peter Jones discovered the famous footprints here in Olduvai, proving that our ancestors walked straight as early as 3.8 million years ago.

Many of these finds are now preserved in the Olduvai Goj Museum of Anthropology and Human Evolution, which was opened in 1970 in the Ngorongoro Nature Reserve by Mary Leakey herself. 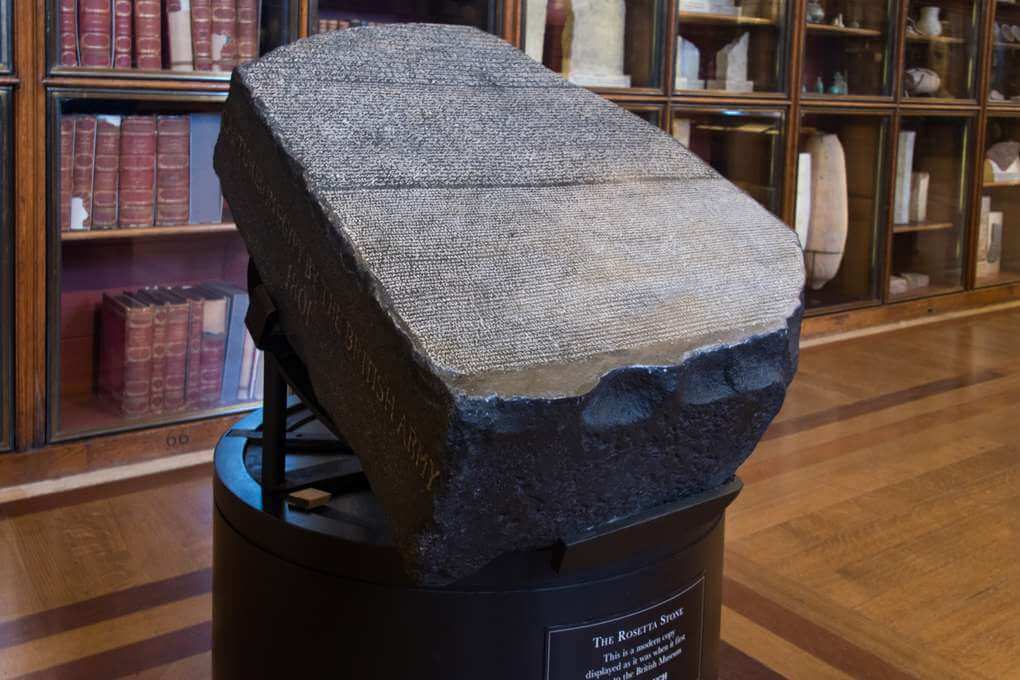 In 1799, near the town of Rosetta in Egypt (now – Rashid), a stone stele was found, the surface covered with text in three languages.

It was discovered by the captain of the French troops (we recall the Egyptian campaign of Napoleon I), Pierre-Francois Bouchard, who led the construction of Fort Saint-Julien in the Nile Delta.

Being an educated man, Bouchard appreciated the importance of the find and sent it to Cairo, to the Institute of Egypt (opened on Napoleon’s orders only a year ago). There the stele was studied by archaeologists and linguists, who found out that the inscription, made in ancient Egyptian (and executed in hieroglyphs), below-in a much later Demotic script, and even lower-in ancient Greek, is dedicated to Ptolemy V Epiphanes and created by Egyptian priests in 196 BC.

Since the meaning of all three fragments was identical, the Rosetta Stone became the starting point for deciphering ancient Egyptian hieroglyphs (using an elementary comparison with the ancient Greek text).

And even though just part of the stele with hieroglyphs was damaged the most, scientists succeeded. Now the Rosetta Stone is kept in the British Museum. 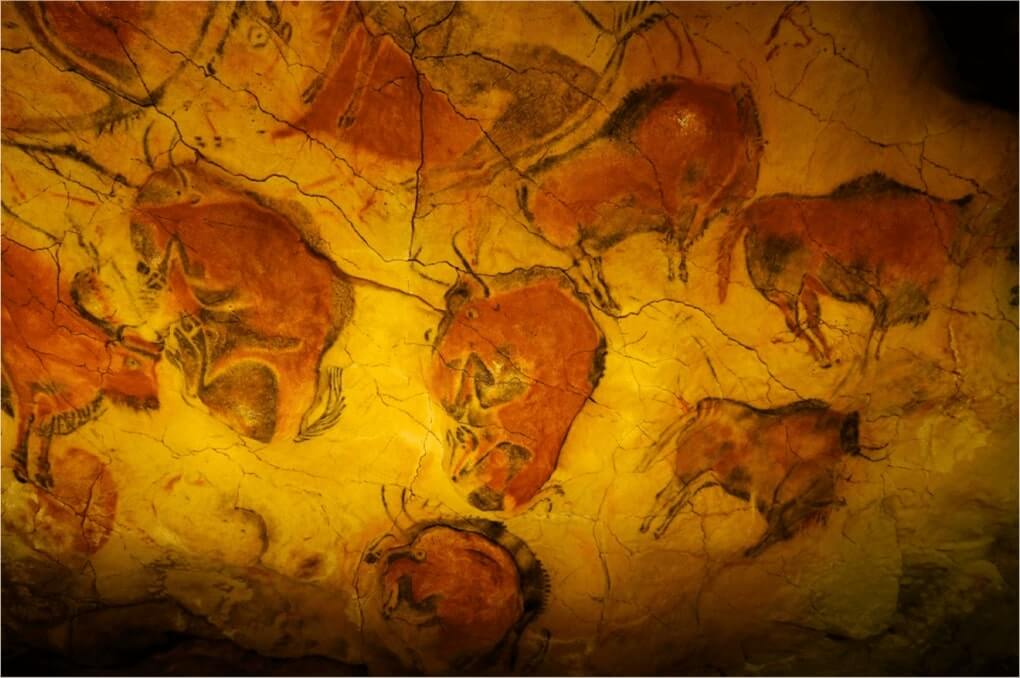 In the Spanish province of Cantabria, there are a considerable number of caves. Therefore, when in 1868, the hunter Modest Cubillas Peras discovered another one near the town of Santillana del Mar (its entrance was almost covered with a landslide), no one paid much attention to this.

But in 1879, the local amateur archaeologist Marcelino Sanz de Southuola decided to study it. His 9-year-old daughter Maria was with him, and, according to one version, she drew her father’s attention to the beautiful polychrome drawings on the ceiling of the cave, exclaiming, ” Dad, bulls!”

It turned out that the bison, horses, wild boars, etc., depicted on the walls and arches of the Altamira cave are from 15 to 37 thousand years old and belong to the Upper Paleolithic era. They painted the “bulls” in charcoal, ochre, and other natural colors.

For a long time, other Spanish archaeologists have tried to prove that Southwala is a fraud. No one could believe that the ancient people could portray animals so skillfully.

Altamira has been a UNESCO World Heritage Site since 1985. 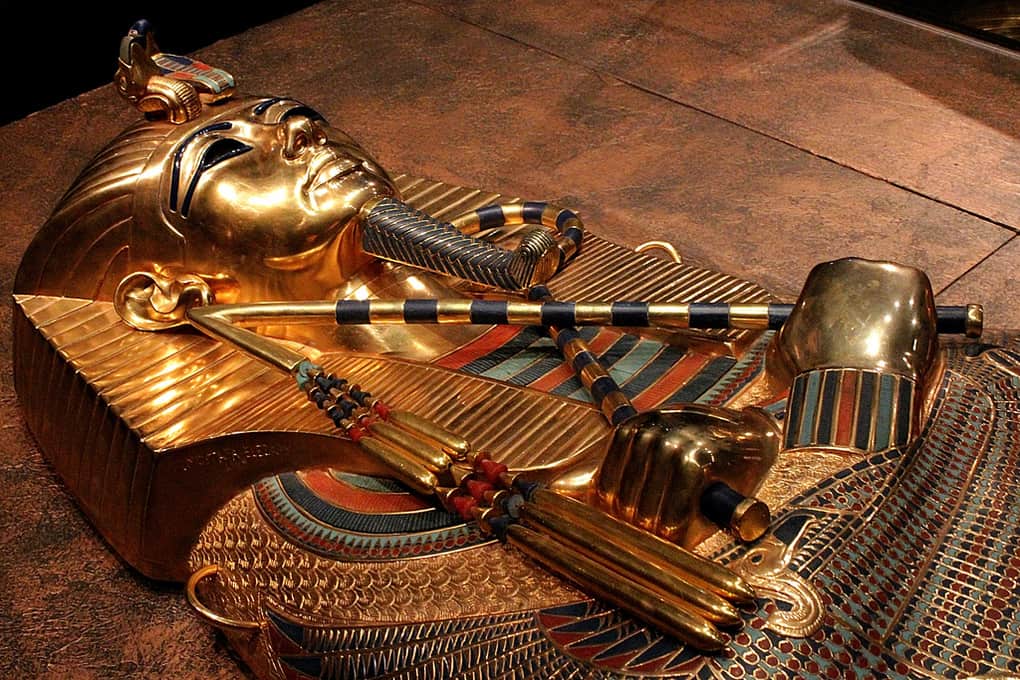 The name “Tutankhamun” is also trendy. Discovered in 1922 in the Valley of the Kings near Luxor, the 4-chamber tomb of a very young pharaoh, which was robbed twice in ancient times, but preserved a lot of valuable items, became one of the greatest finds not only in the field of Egyptology but also in the entire world of archeology.

It contained a lot of jewelry, household items, and ritual objects that accompanied the Pharaoh to a “better world”.

But the main treasure was the sarcophagus of Tutankhamun, in which his mummy was perfectly preserved. The tomb was found by archaeologist and Egyptologist Howard Carter and George Carnarvon, a British lord and collector of antiquities.

By the way, because of disputes about where the found valuables should be stored-in Egypt itself or in Britain (the birthplace of the discoverers), relations between these two countries almost deteriorated, and Carter was practically expelled from Egypt forever. 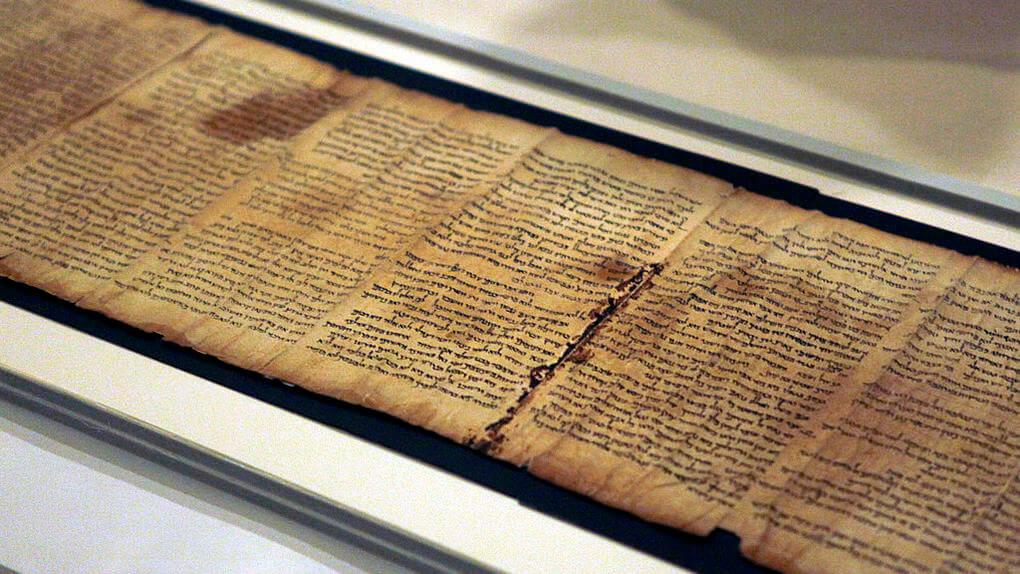 And one more find from the field of “biblical” archeology is of great importance for scientists studying the origins and dogmas of world religions (in this case, Judaism and early Christianity).

Nine hundred seventy-two documents written mainly on parchment (and partly on papyrus) were accidentally discovered by an ordinary shepherd in the Qumran caves near the Dead Sea. A significant part of them was sealed for safekeeping in ceramic vessels.

These valuable scrolls were found in 1947 but are still periodically discovered today. The time of their creation is approximately from 250 BC to 68 AD.

The content of the documents varies: about a third of them are biblical texts, while others are Apocrypha (non-canonical descriptions of sacred history), texts by unknown religious authors, collections of Jewish laws and rules of life and behavior in the community, etc.

In 2011, the Israel Museum digitized most of these texts (with the support of Google) and put them on the Internet. 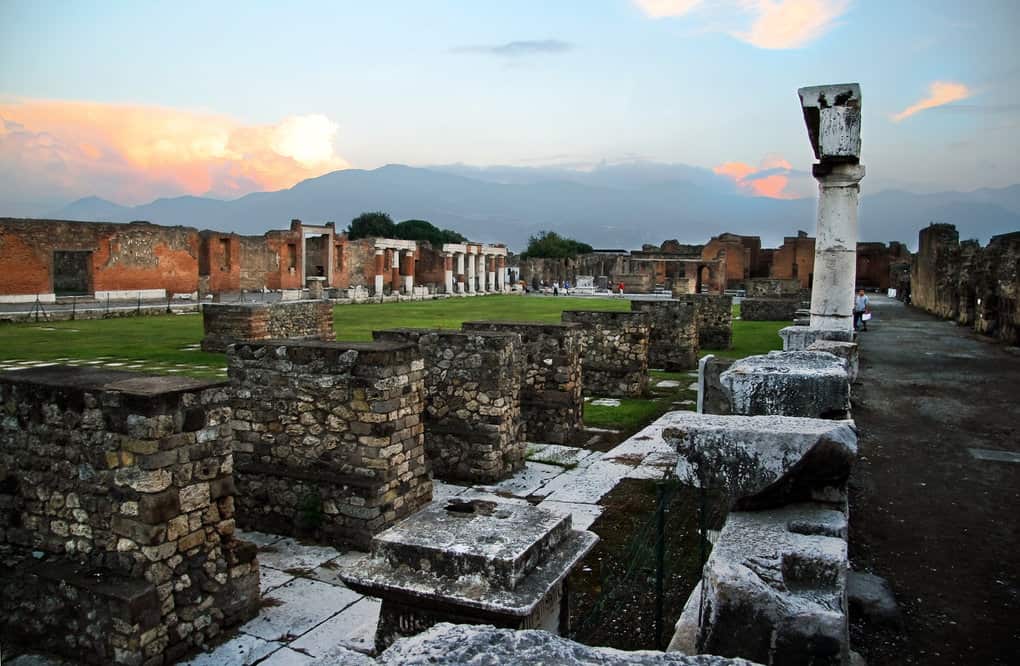 When you mention the name “Pompeii”, someone immediately remembers the famous Karl Bryullov painting” The Last Day of Pompeii” someone the recent film” Pompeii ” with Kit Harington.

Almost everyone has heard about this city, which Mount Vesuvius destroyed at the end of October 79 AD (but not everyone knows that along with Pompeii, two more cities died-Herculaneum and Stabia).

They were discovered purely by chance: in 1689, workers digging a well came across the ruins of an ancient building, on the wall of which there was an inscription with the word “Pompeii”. But then they thought it was one of Pompey the Great’s villas.

It was only in 1748 that excavations were begun at this site, and their leader, the military engineer R. J. Alcubierre, believed that he had found Stabiae. He was only interested in things with artistic value and destroyed the rest (until the archaeologists were outraged by this fact).

In 1763, it finally became clear that the found city was not Stabiae but Pompeii. In 1870, the archaeologist Giuseppe Fiorelli guessed to fill in the voids left on the site of people and domestic animals who had died and were covered with a layer of ashes, thus obtaining their exact posthumous casts.

To date, approximately 75-80% of Pompeii has been excavated. 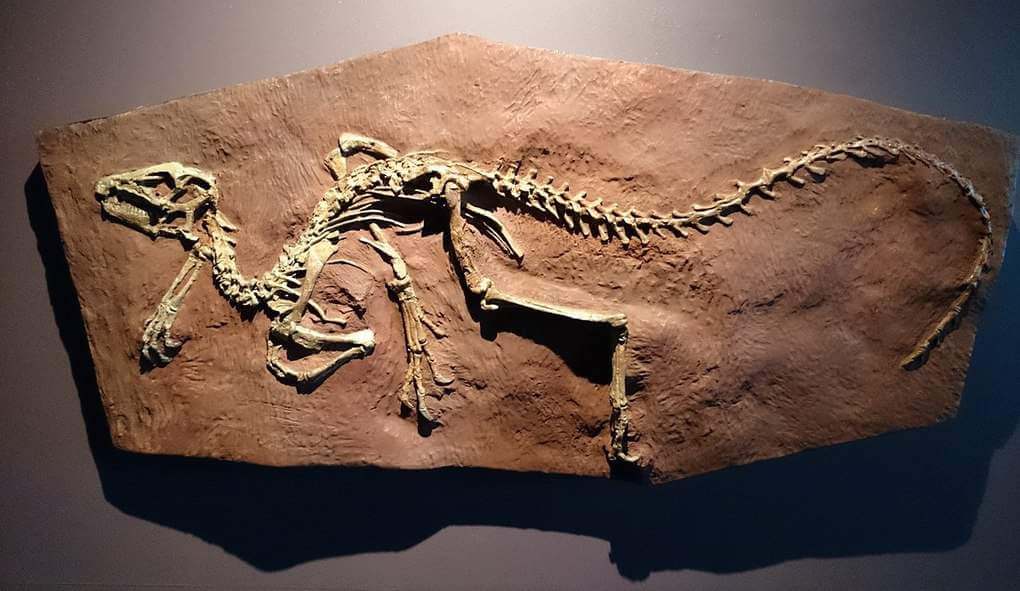 Now no one can say precisely when people found dinosaur bones for the first time. Still, the first documented case of finding the remains of ancient lizards occurred in 1677, when Oxford Professor Robert Plott. Robert Plott got a massive femur of an unknown animal, first decided that it was part of one of the elephants brought to Britain by the Romans, and eventually concluded that They are believed to be the remains of a sinner who drowned in the Great Flood.

(By the way, until the 19th century, people most often considered dinosaur bones to be the remains of biblical giants, but the Chinese, who were closest to the truth, called them dragon bones and even attributed healing properties to them).

People in Europe were very religious until very recently, so they could not imagine that such strange giant creatures once existed on earth (it is unlikely that God created them).

In 1824, the British geologist and paleontologist William Buckland first described and named the dinosaur species he discovered, megalosaurus (the “great lizard”). The very term “dinosaur” appeared only in 1842. 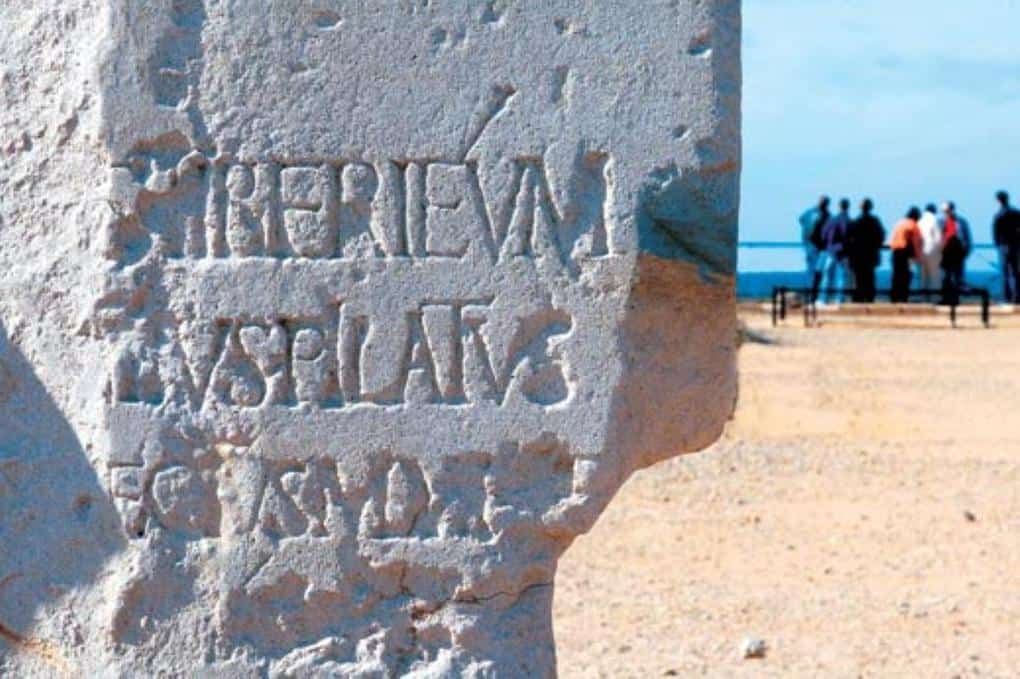 We have all heard the story of the crucifixion of Christ and know who sentenced him to this painful execution. But until 1961, there was no evidence that Pontius Pilate (the procurator of Judea) existed as a living person and was not invented by the authors of the New Testament.

So, firstly, it became clear that Pilate was a natural, historical person, and secondly, that he was not a procurator but a perfect (at that time, however, the duties and rights of the people who held these two positions in the Roman provinces were almost identical).

Now the Pilate Stone is in the Israel Museum in Jerusalem. 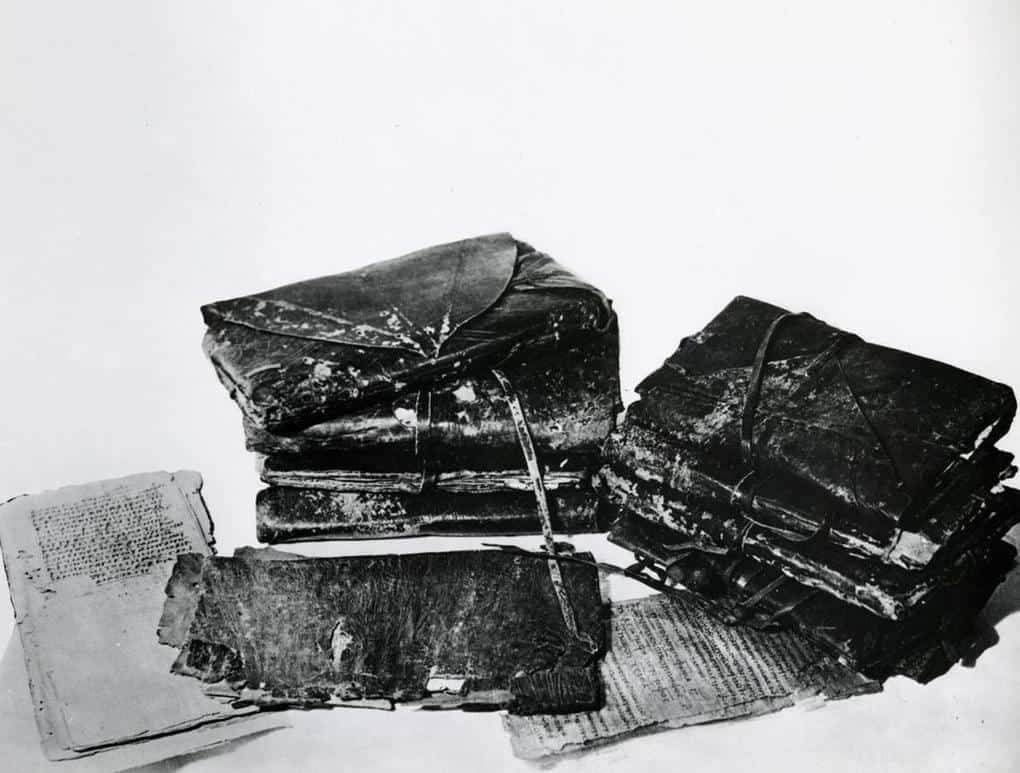 In 1945, a farmer named Mohammad Ali Samman accidentally found a car near the town of Nag Hammadi (Egypt), a collection of 12 ancient codices written on papyrus (only eight leaves of Codex 13 remain), which opened the veil of mystery that shrouded the first centuries of Christianity.

Historians have found that there are 52 texts in the codices in total; 37 were previously unknown, and already saw the rest in the form of translations into other languages, citations, references, etc.

The texts included several Gospels, part of Plato’s book The State, and documents deviated significantly from modern Christian dogmas and contradicted the Bible.

According to historians, these papyri were made in the IV century and especially hidden by the monks of a nearby Christian monastery after the Archbishop of Alexandria, Athanasius I the Great, ordered the destruction of all non-canonical texts. These codices are now preserved in the Cairo Museum.

One of the most valuable recent finds in the field of so-called “biblical” archaeology is the personal seal of Baruch ben-Neria.

Baruch was not only a friend and helper of the prophet Jeremiah (and also, in modern terms, his secretary) but also the author of the biography of this wise man.