Extinct animals: Nature is the first to pay for the tremendous successes of human civilization. Ensuring a comfortable existence for themselves, people become the culprits of the death of entire species of representatives of the animal and plant world. Extinct animals through human fault – how many of them have disappeared forever from the face of the Earth? 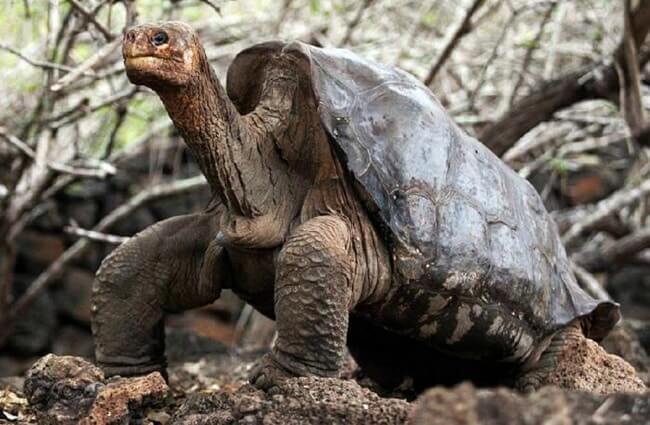 The Abingdon elephant turtle is in 1st place in the sad list of animals that have become extinct due to human fault.

Many have followed the fate of Lonesome George. It was the last member of the Abingdonian elephant turtle subspecies. It spent the last years of its life on Santa Cruz Island, where the Darwin Research Station is located. For many years, zoologists did not lose hope of obtaining George’s offspring by crossing with related species, but the embryos of the eggs turned out to be unviable. On June 24, 2012, the last representative of the giant Abingdon elephant turtles died at the age of about 100 years. Now this subspecies of the Galapagos tortoises is officially extinct.

Humans are responsible for the disappearance of elephant turtles. For hundreds of years, they have been used as live canned food, transported in the holds of ships. 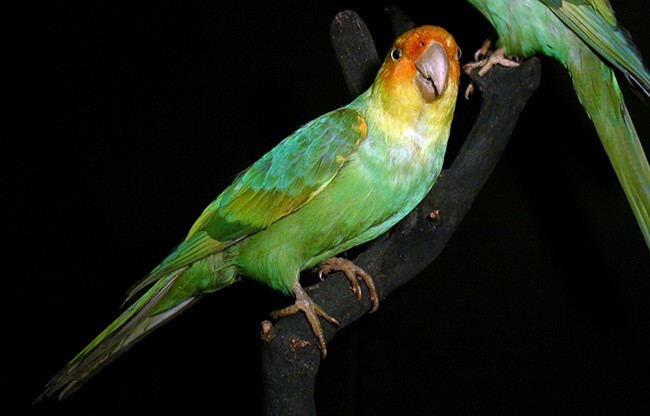 The wandering pigeon is an example of how the most common bird on Earth can be destroyed by humans. Lived in North America. The decline in the population began in the 19th century. This was facilitated by many reasons, among which poaching was in the first place. The pigeon meat was delicious, and the northern states were ruthlessly destroying the birds. The last representatives of the species disappeared at the beginning of the 20th century. 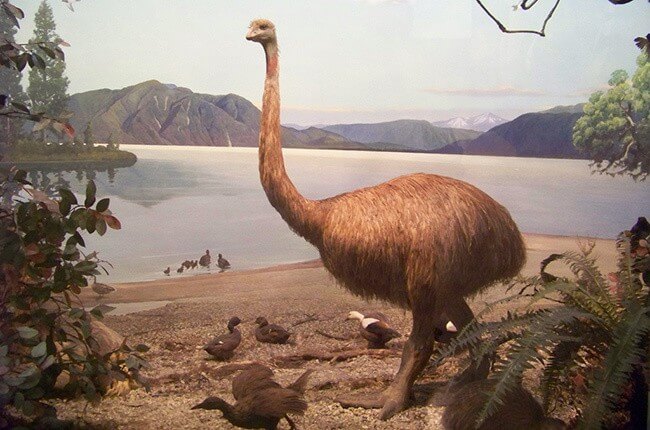 Moa are the giant wingless birds that became extinct due to human fault in the 16th century. Lived in New Zealand. Some species were gigantic in size – up to 3.6 meters in height. Moa were herbivores. They ate fruits, leaves, and shoots. Extinct at the beginning of the 16th century. The majori, the indigenous population of New Zealand, is to blame for the disappearance of these amazing creatures.

The Carolina parakeet, the only member of the genus, has become another sad example of animals that have become extinct due to human fault. Lived in North America and became extinct as a result of merciless hunting. The last Caroline parakeet was seen in 1926. The species is officially extinct. 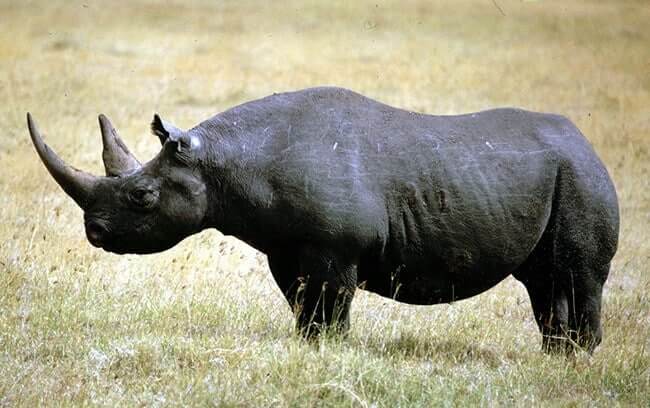 The black rhinoceros (Cameroon subspecies) is another representative of extinct animals due to human fault. Its name is conditional since the color of animals depends on the color of the soil of the area where they live. Until the middle of the 19th century, the black rhino was an ordinary inhabitant of Africa. But then, thanks to the belief in the miraculous power of the horns, they were hunted.

Animal horns were also used as material for dagger handles. Now the total number of black rhinos does not exceed 4 thousand individuals, but the Cameroon subspecies did not survive the extermination by poachers and was declared extinct in 2011. 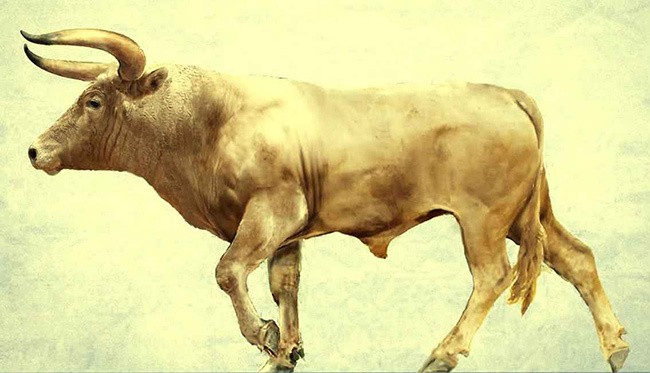 Aurochs are the most famous subspecies of the wild bull, which is another representative of animals that have become extinct due to human economic activity and hunting. The primitive Aurochs were exterminated in Africa and Mesopotamia as early as the third millennium BC.

In Central Europe, its population has been declining since deforestation. By the 15th century, animals were taken under protection, but their numbers were steadily declining. The last round disappeared in the middle of the 17th century. Enthusiasts from different countries are reviving Aurochs. 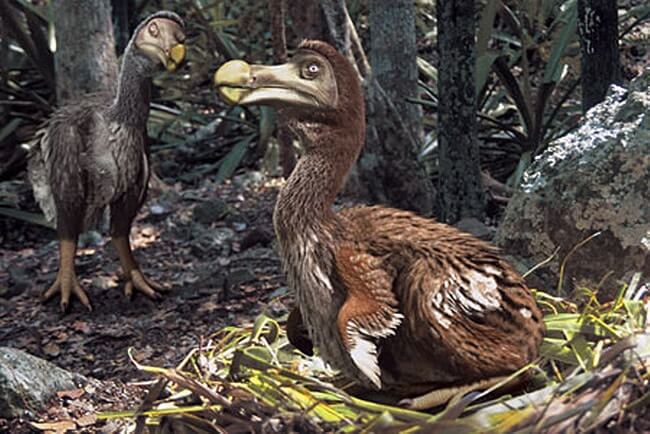 The most famous representative of animals extinct due to human fault is the dodo or the Mauritian dodo. It disappeared so quickly since the discovery of this species of flightless birds by European travelers that for a long time scientists considered the dodo a mythical creature.

Habitat was the island of Mauritius. The dodo was first discovered by Dutch sailors in the 16th century. From that moment on, the bird was subjected to intense extermination and disappeared in the middle of the 17th century. The dodo became famous, thanks to Lewis Carroll, who made him the character of “Alice in Wonderland”. The writer identified Dodo with himself. 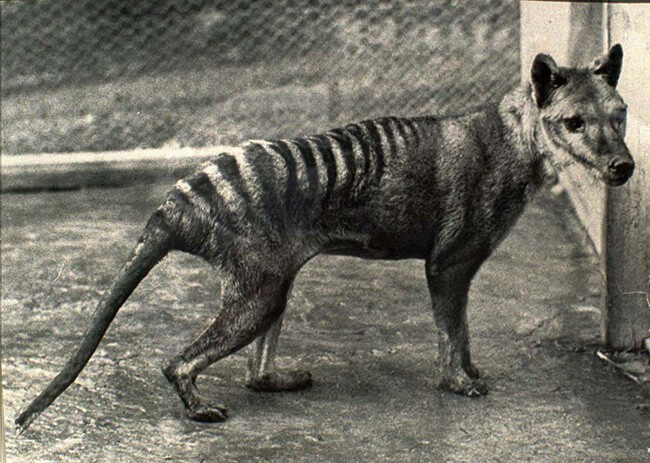 The Tasmanian wolf (thylacine) is the only representative of the marsupial wolf in the world that has been completely destroyed by humans. Habitat was Australia, New Guinea, and Tasmania. Europeans first encountered the Tasmanian wolf in the 18th century. At the beginning of the 19th century, hunting for animals was opened. Farmers considered wolves to be the main enemy of the sheep herd. As a result, few animals survived only in remote places of Tasmania.

In the 20th century, due to the canine plague that broke out on the island, the population of the Tasmanian wolf fell dramatically. Despite this, it was not included in the list of protected species, and hunting for it was not officially prohibited. The last wild Tasmanian wolf was killed in 1930. Scientists suggest that isolated representatives of the species could have survived in the hard-to-reach places of the island. Despite the proposed high reward for capturing the animal, there is no documentary evidence that the Tasmanian wolf is not extinct. 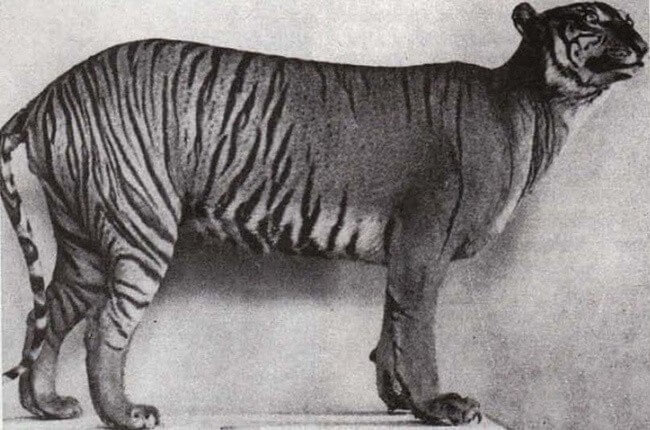 The list of extinct animals due to human fault continues with the Javan tiger. It belonged to the smallest subspecies of tigers. Habitat was Java island. The reason for the disappearance is active hunting and the destruction of the animal’s habitat by humans. By the mid-1980s, only three Javanese tigers survived. It was last seen in 1979. The species is considered extinct, although sometimes there are reports that tigers have been seen on the island of Java. Zoologists are skeptical about this, believing that a leopard is mistaken for a Javan tiger.

Other subspecies of tigers are also on the verge of extinction. For example, the population of the Sumatran tiger today has only 300 individuals. 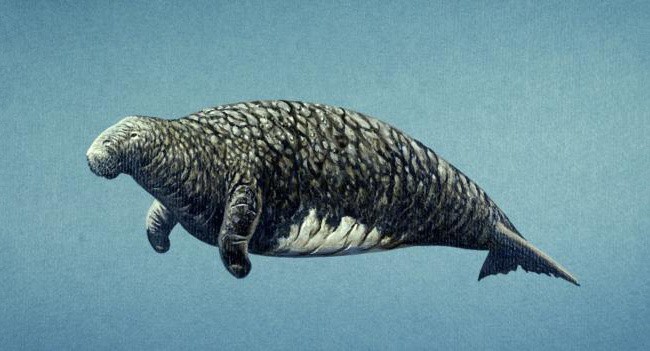 The sea cow is a vivid example of human’s predatory attitude towards nature. The view was discovered by the Bering expedition in 1741. This animal, extinct due to human fault, was distinguished by a sedentary lifestyle and apathy. The sea cow reached an impressive size that is about 8 meters in length.

One of the characteristics of the animal was the complete absence of fear of people. Unfortunately, these sea creatures had delicious meat. By 1768, a modest population of sea cows had been wiped out by humans. The closest relative of the sea cow is the dugong.

The statistics of endangered animal species are terrifying. We lose several species of animals, plants, birds, and insects every day. We are the main reason for the catastrophic death of the animal and plant world of the Earth. Today, 40% percent of living things are on the brink of extinction, and this terrible figure is only increasing.