Top 10 biggest fish in the world

Biggest fish: The reservoirs of the Earth hide real giants – freshwater and marine fish, striking in their size. Some of them are not only completely safe for humans, but they themselves are an object of hunting, while it is better to stay away from others.

We present the top 10 biggest fish in the world

The giants include those fish, the length of which is more than two meters, and the bodyweight exceeds 90 kilograms. 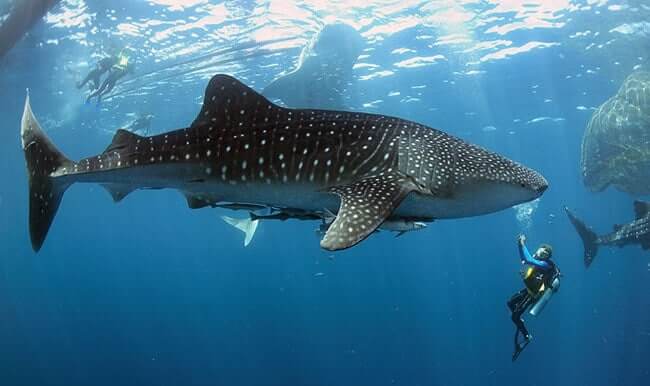 The undisputed leader in our ranking of the largest fish in the world is the whale shark. The average body length is 10 meters, but there are a few over 12 meters long. Scientists do not exclude the existence of larger specimens of the whale shark, reaching 18-20 meters in length. Despite its monstrous size, this marine predator does not pose a direct danger to humans, since it feeds on plankton. The whale shark is so calm that it allows divers to touch itself and even climb onto its back. 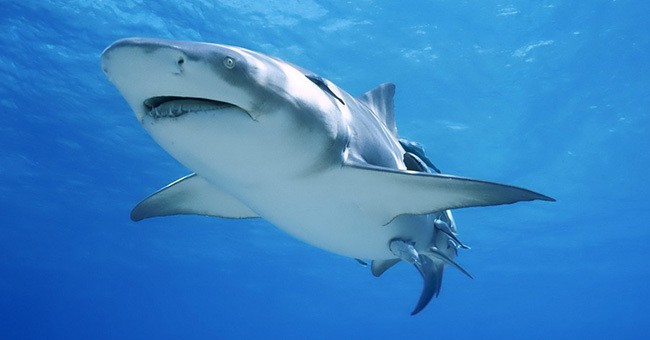 The largest and most dangerous marine predator is the great white shark. The average length of an individual is about 4.6 meters, but there are specimens exceeding 6 meters in length. The weight of such monsters can be more than two tons. The predator is found in all oceans and poses a great danger to humans.

Great white shark prefers coastal waters and often attacks swimmers and divers. Cases of attacks on boats were recorded. The predator hunts for large fish, dolphins, pinnipeds, sea turtles, birds. The white shark is an endangered species with a population of 3,500 sharks. 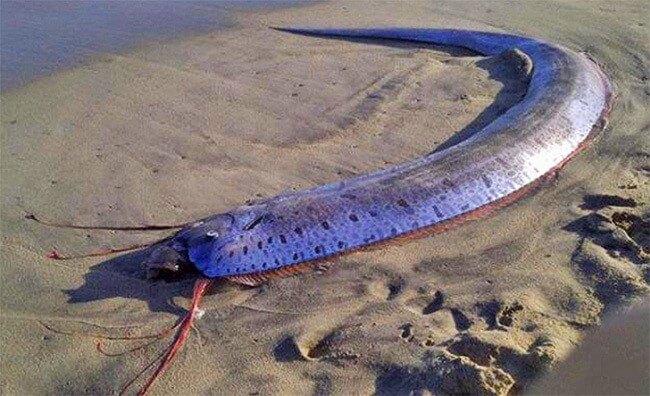 The Giant oarfish or King of herrings is one of the most unusual and longest fish in the world. This fish lives at depths in the Pacific, Atlantic, and Indian oceans. It is often mistaken for a sea snake. This is not surprising – with a body thickness of only 5 centimeters, the length of a fish can reach five and a half meters.

According to some reports, these were found about 17 meters in length. The largest documented specimen was 11 meters long. The second name is the herring king, the Giant oarfish did not receive it by chance. This is often seen floating in schools of herring, and the strongly elongated rays of the dorsal fin form a kind of “crown” on the head. 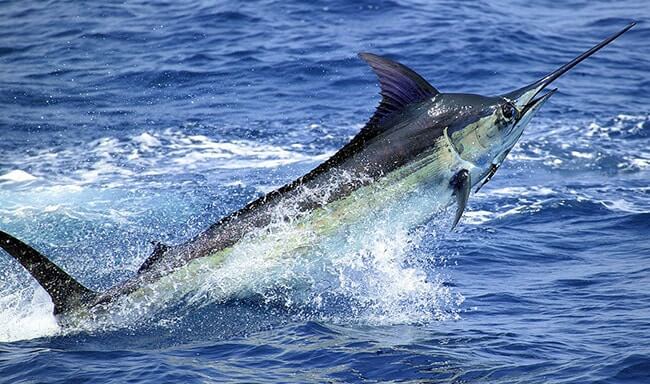 The Atlantic blue marlin is one of the most beautiful and largest marine fish in the world. Reaches an impressive size – 5 meters in length. Moreover, about 20% of the length of the fish falls on its spear. Females are much larger than males. Habitat – Atlantic Ocean. Marlin is a favorite sport fishing target. Catching this is considered a great success. In its famous novel The Old Man and the Sea, Hemingway described a three-day struggle between an old fisherman and a blue marlin. Fourth place in our ranking. 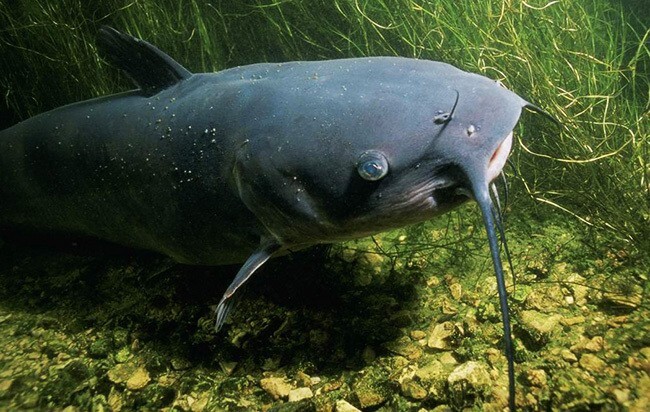 Wels catfish is one of the largest freshwater fish and ranks fifth in our ranking. The body length of the fish can reach 5 meters, and the weight is half a ton. It is an active nocturnal river predator. It hunts for fish, mollusks, crustaceans. Particularly large catfish can attack birds and small animals. There are many stories connected with catfish about the attack of these predators on people, but there is no documentary evidence of this. Although a large catfish is able to drag a person entangled in the tackle under the water. 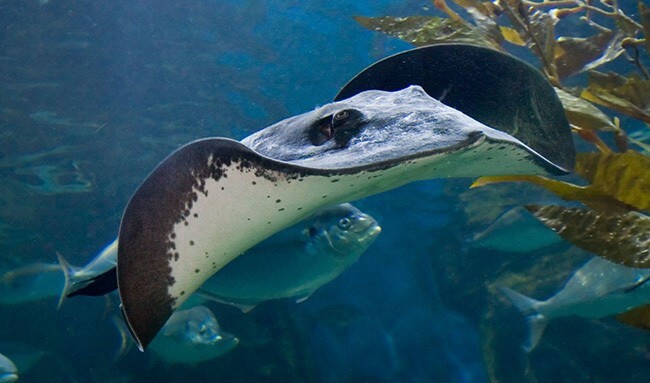 The giant freshwater stingray is the sixth-largest fish in the world. Many have heard of the stingray, but much less is known about its smaller freshwater cousins. In length, the inhabitants of the rivers of Indonesia, Malaysia, and Thailand reach 4.5 meters. The average weight is 450-500 kg. You can find these giants in Australia, New Guinea, and the island of Borneo. For humans, they do not pose a great danger if they are handled correctly.

The giant freshwater stingray is armed with two large spines located on the tail. One of them holds the prey, the second is needed to inject the poison. When catching a stingray, it always actively wags its tail, defending itself, therefore, when catching these giants, you need to be extremely careful. 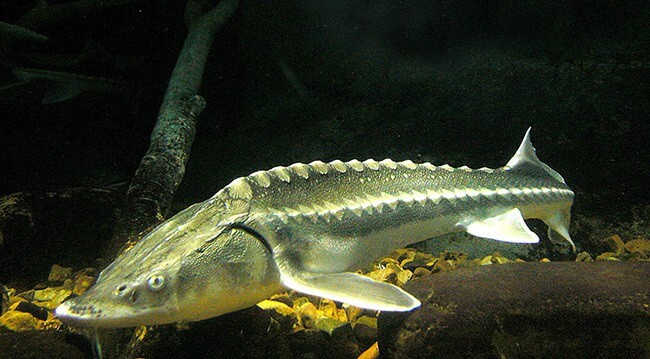 Beluga ranks seventh in the top 10 largest fish in the world. This valuable freshwater fish is now on the verge of extinction. Lives in the Azov, Caspian, and Black Seas. There is ample evidence of the capture of giant belugas. In 1989, a fish with a length of 4.2 meters and a weight of one ton was caught on the Volga. Now its stuffed animal is in the museum of the city of Astrakhan. Nowadays, fishermen come across small individuals, although there are cases of catching beluga weighing 150-300 kilograms.

Beluga is a large predator that feeds mainly on fish. 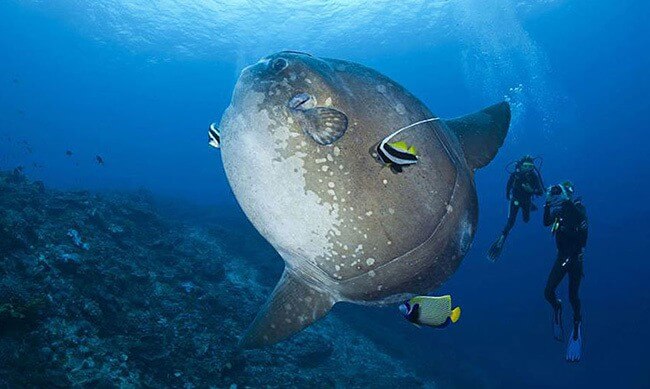 Moonfish is the largest and most amazing bony fish that lives in warm seas everywhere on Earth. You can meet this fish from the Kuril Islands to Iceland. It looks rather unusual: the body of the fish is compressed from the sides and resembles a giant disc. The skin is not covered with scales, but with small bony tubercles. The size of the fish is striking – 2 meters in length. The weight can be up to 1.5 tons. Officially, the largest specimen was 3 meters long, but there is evidence that a moonfish more than 4 meters in size was seen in the waters near Sydney.

Unlike many other largest fish in the world, the moonfish poses no danger to humans. On the contrary, it is actively caught. Eighth place in our ranking. 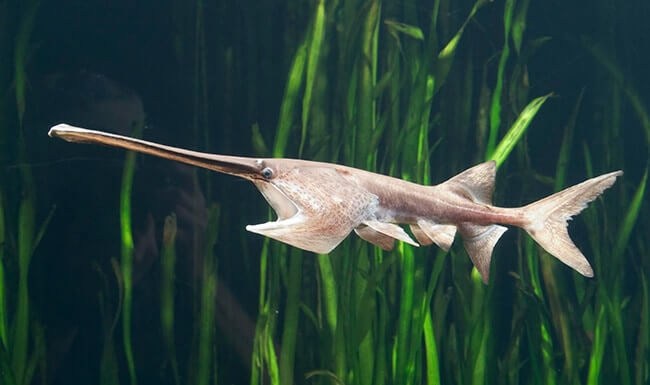 Psephurus gladius or Chinese paddlefish, which lives in the Yangtze River, is the largest freshwater fish in the ray-finned class. Body length can reach three meters, and weight – 300 kilograms. There is information that there are specimens up to 7 meters long, but this information has not been documented.

The Psephurus gladius feeds on crustaceans and small fish. It belongs to endangered species and is not found anywhere else in the wild. The ninth place in the list of underwater giants. 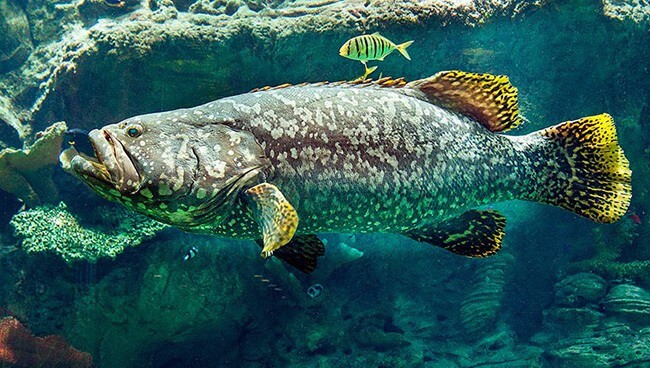 The top 10 largest fish in the world are ended by the giant grouper. Distributed in the tropical shallow waters of the Caribbean Sea, found on the coast of Brazil. It reaches 2.5 meters in length. It feeds on fish, small sea turtles, octopuses. The giant grouper is an endangered species and is prohibited from fishing. This has had an effect – the population of these giant fish is slowly but increasing. Since the grouper is actively defending its territory, it can, while defending itself, attack a person and inflict serious wounds.