Meizu X8: Qualcomm is currently the world leader among manufacturers of chips for mobile devices. For example, a powerful Snapdragon 710 processor that is already perfectly working devices such as the popular Nex and Vivo Xiaomi Mi 8 SE. Energy efficient has great potential and great performance. Not to mention the fact that most companies will soon release new models of devices on the chip.

Yet company officials tight-lipped about exact specifications of the device, and images “live” is almost there in the network. 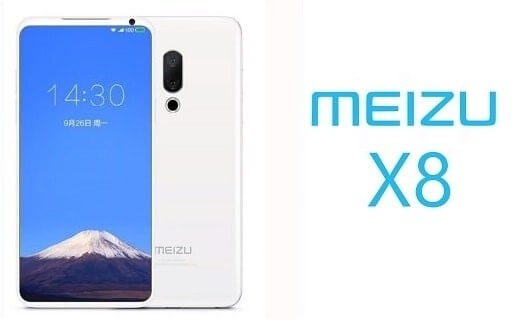 Note that the device Meizu X8 is the first model with a cutout in the top of the screen. There is a neat camera and sensors. The smartphone can be safely considered frameless. The producers promise that it will be thin and compact. The usual button at the bottom of the camera in the style of Mejzu we also do not see, after all, is the display.

Back housing cover must be made of glass, dual camera vertically, there will be a thumbprint scanner.

It is expected several color options:

Meizu X8 will with an elongated display aspect ratio 19:9, FHD+. In the settings screen adjustment color rendering, and a protection mode view.

The two main smartphone camera at 12 megapixels, with the Sony module IMX363, by the way, a sensor is present and the smartphone 8 Mi SE. The sensor could be called subfragment, as shown, clear images are obtained even when lighting is poor. Just to say that there will be an adjustment of advanced settings, photo shooting and video recording in 4K.

As mentioned above, the heart of Meizu will be X8 OCTA-core chip from Qualcomm and Adreno graphics module 616. RAM at 6 GB, and built-in – 64 or even 128 GB. Undoubtedly, this is a camera with advanced features.

Which battery type is not known, the expected capacity of 3000-3500 mAh. Assume that you’ll be able to fast charge. And, of course, the latest firmware Android.

There is no exact release date yet. But we know the approximate cost of the device – 252- 296 dollars. It is much cheaper than other smartphones with similar parameters.