White Island in New Zealand is not quite the island. This is actually an active volcano, much of which is hidden underwater. On the surface, there is only a top with a diameter of two kilometers. The scenery of the island abounds in acidic and unnatural colors, why it seems that he was on another planet. Don’t know whether there were shooting movies, I think this is the right place.

Interestingly, Maori (the indigenous people of New Zealand) sold three times the volcano of European Industrialists. Now the island is private property, you can get here only after obtaining a special permit. The tour is not cheap: our mission cost of $5000. However, the price tag does not scare people: according to the pilot, he flies to the island twice or three times a day. While his company had three helicopters. And in New Zealand a few companies that do excursions to white. In General, it’s good to have the volcano in the ocean.

Today I suggest you save $5000 & and look at the scenery of the island-the volcano in the photo.

To get to the island in two ways – by water or by air. We chose the second option. The flight was very picturesque.

White island – private volcano in the middle of the ocean 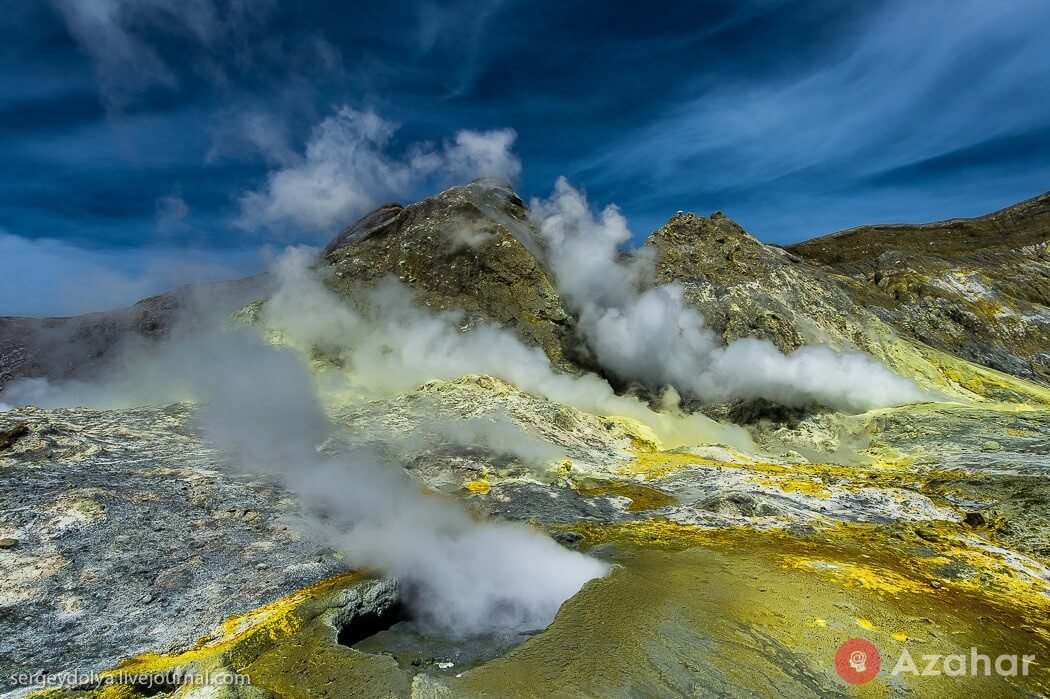 The center of the island is the crater of the volcano. 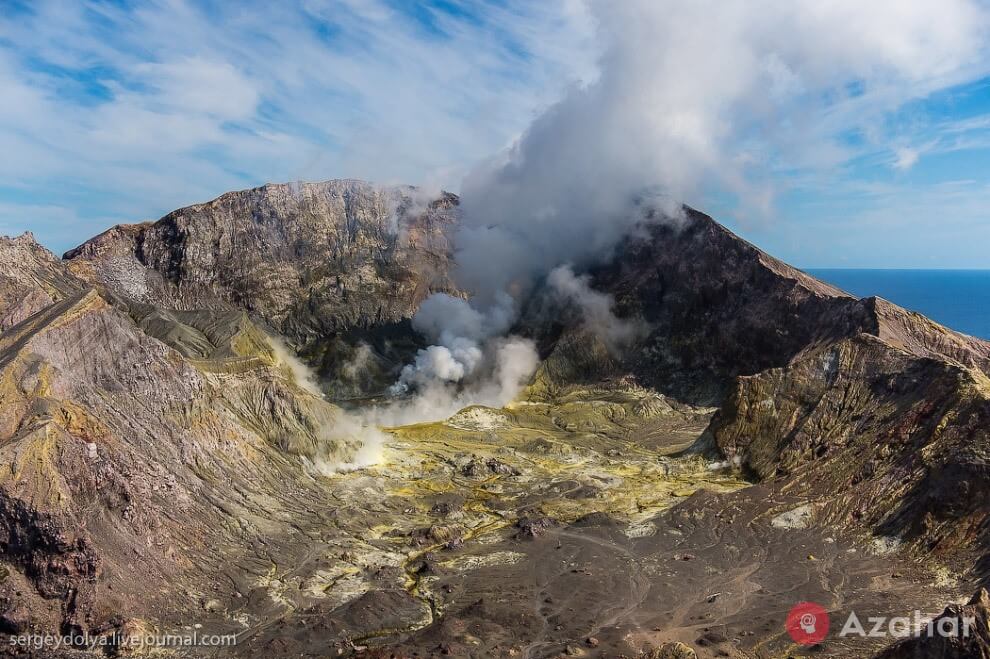 Despite the activity, a crater opened to the public. All tourists are issued respirators have to walk around the crater hard: circle sulfuric geysers, it is impossible to breathe and hurts your eyes. 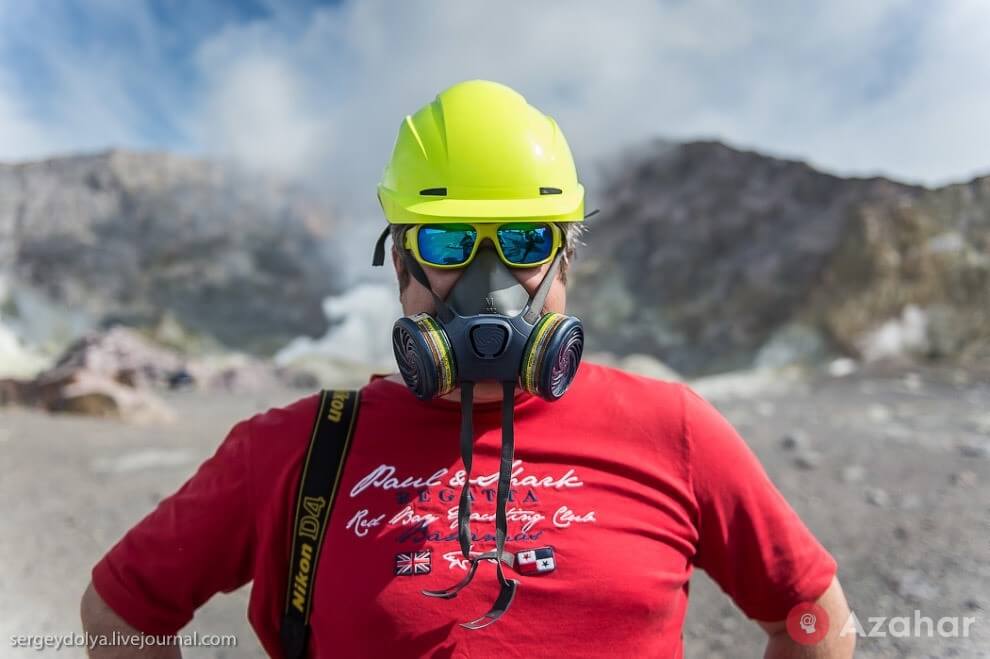 When we arrived, I saw for the next four or five helicopters. 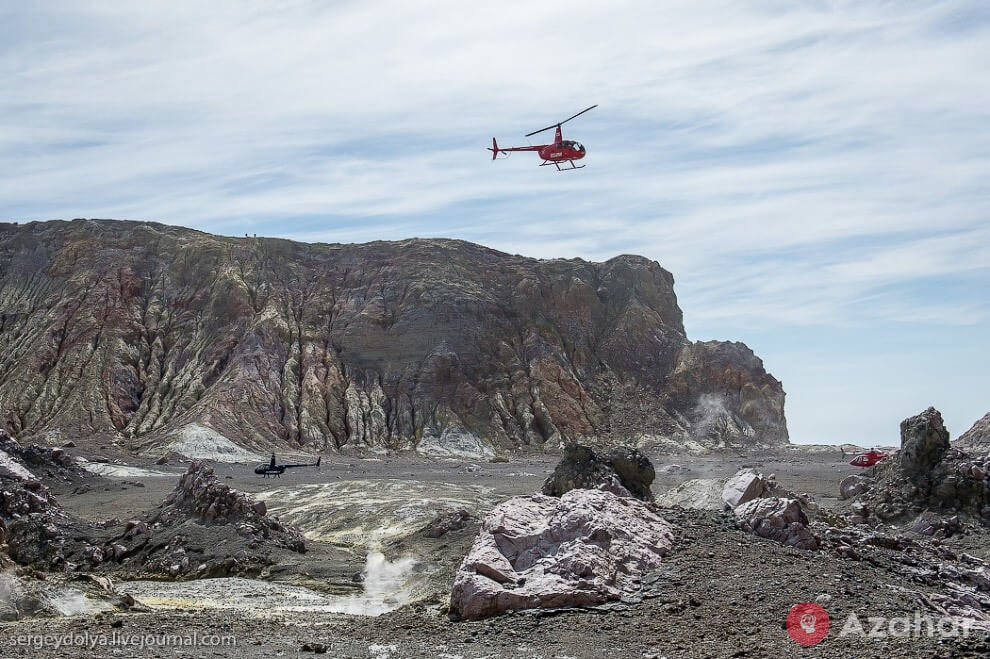 Previously, the island was mined sulfur. Production curtailed after the tragedy in 1914: the volcano awoke and destroyed during the eruption a large part of the factory buildings. 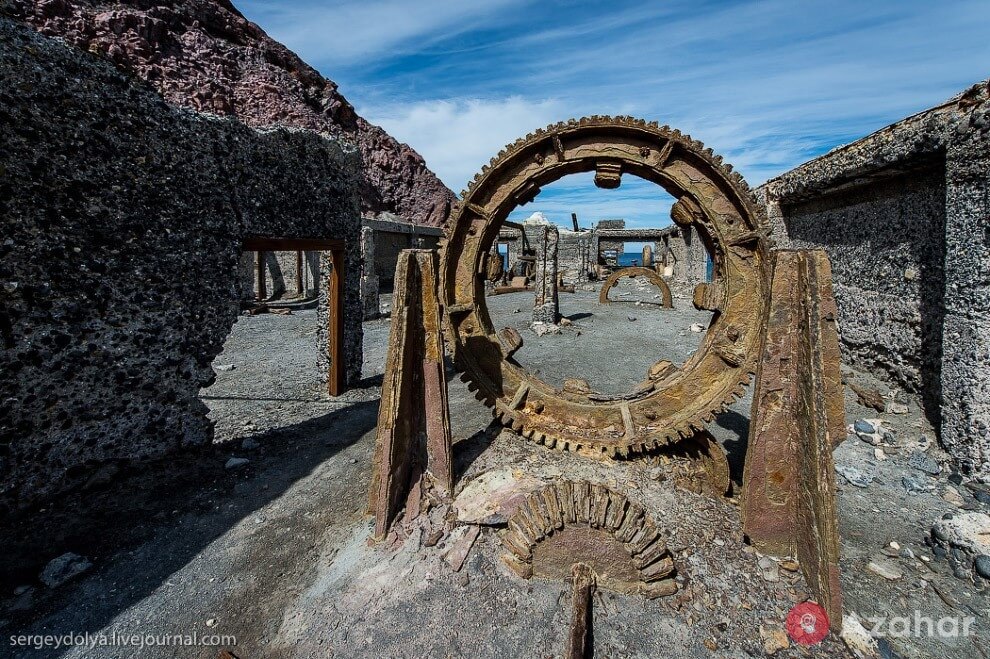 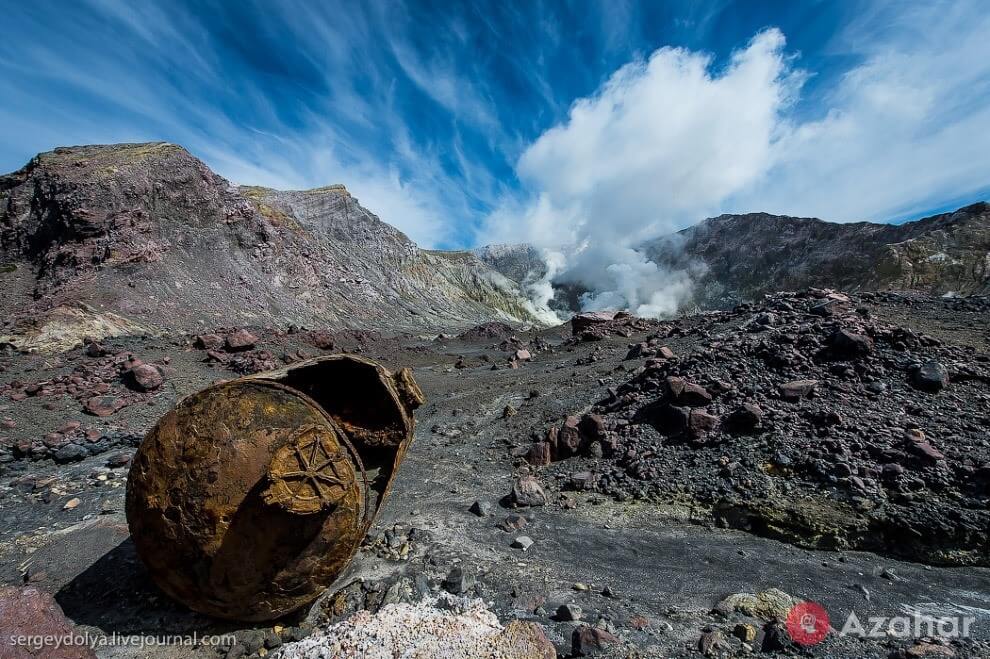 From the shore to the crater walk. 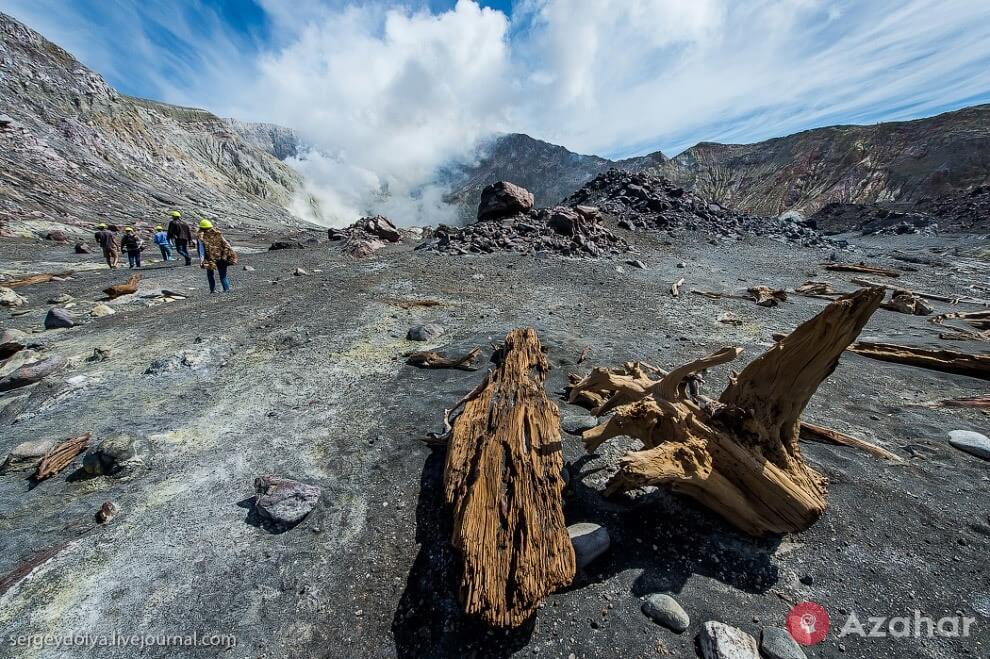 If you look closely, in the center of the frame is a visible trodden path. You can only go to designated routes. 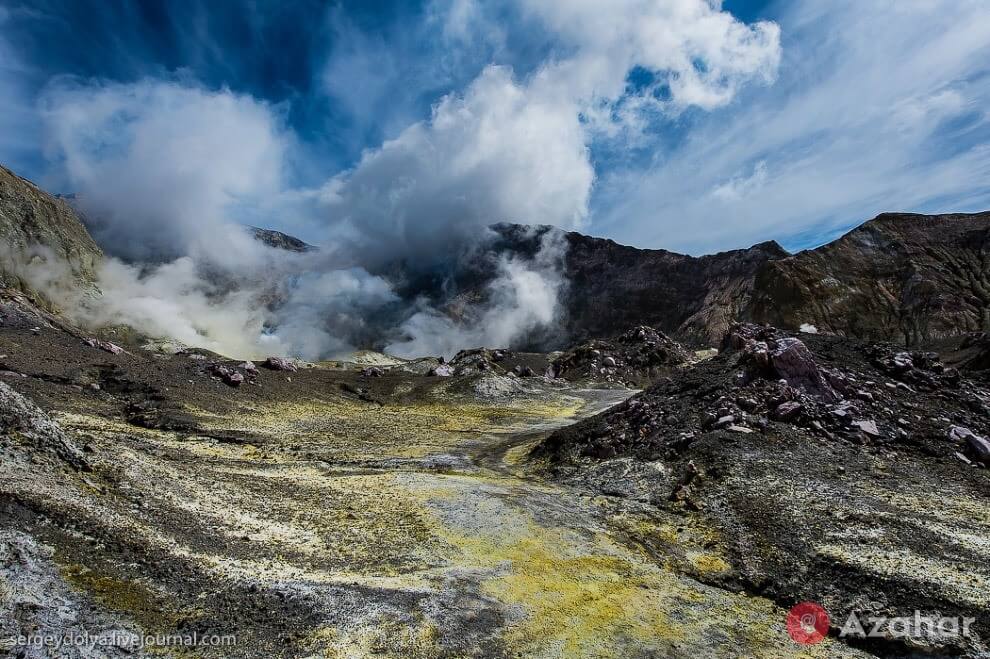 A hole in the ground is one of the sulfur geysers. 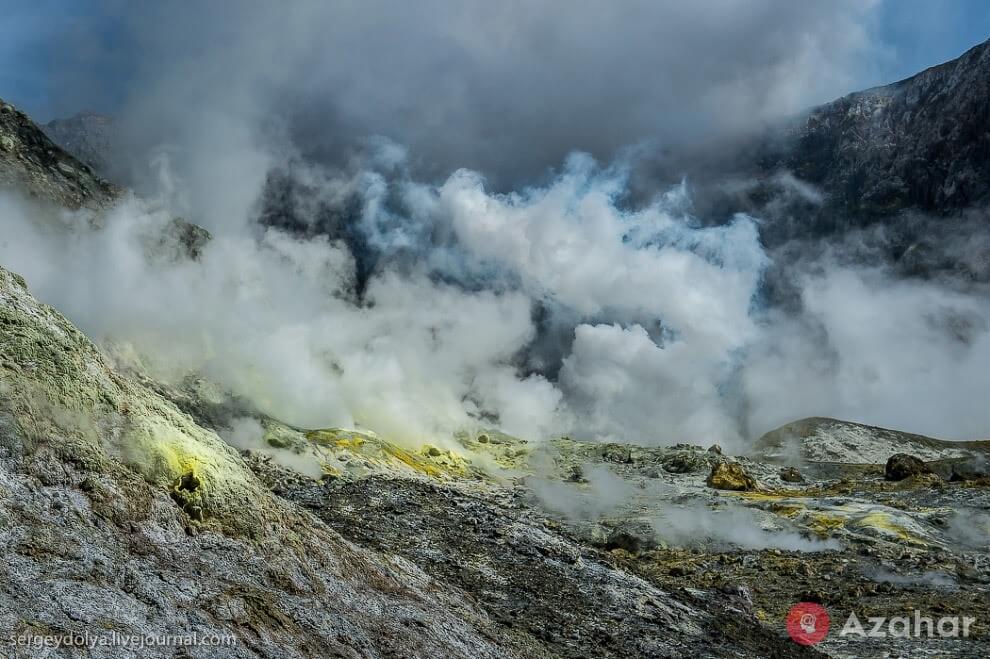 Straight ahead – the center of the crater. It is there that the peak of activity. 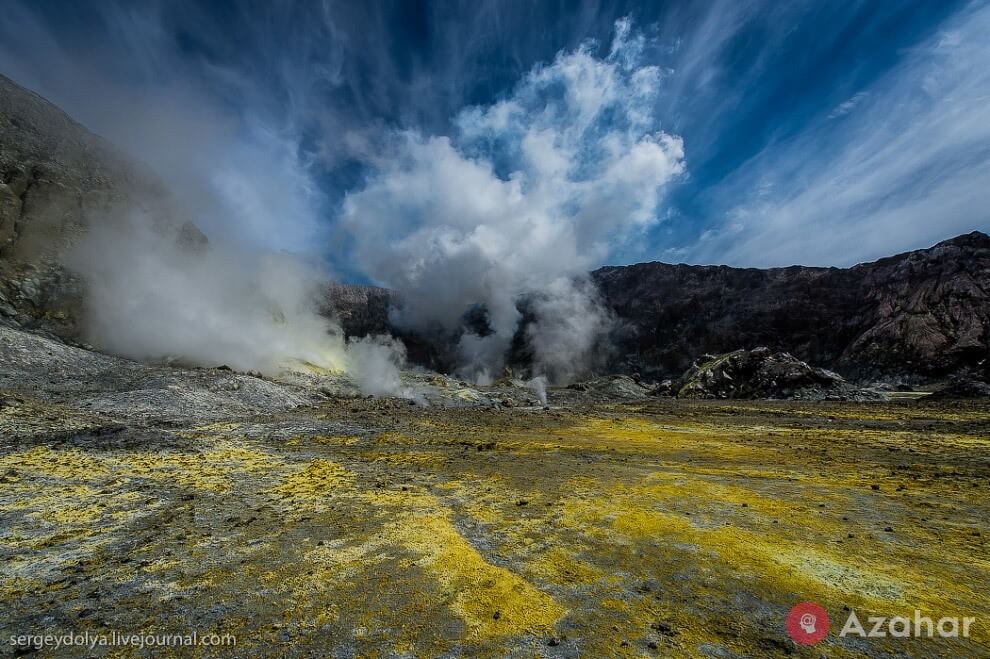 Across the island small river. 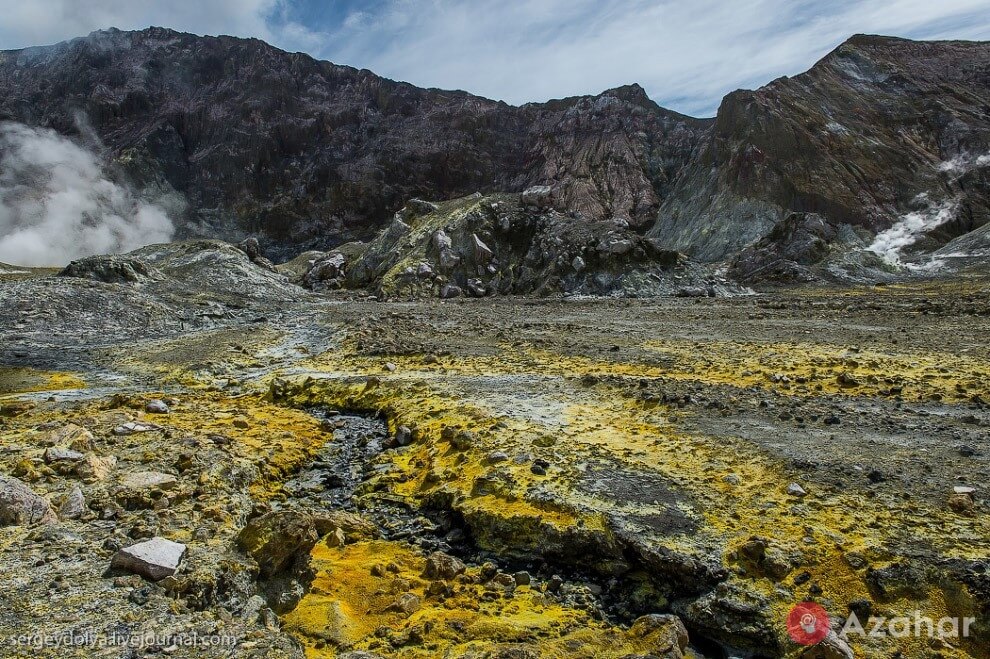 Then, there are mud craters in the ground, and, according to the guides, they are constantly changing places. 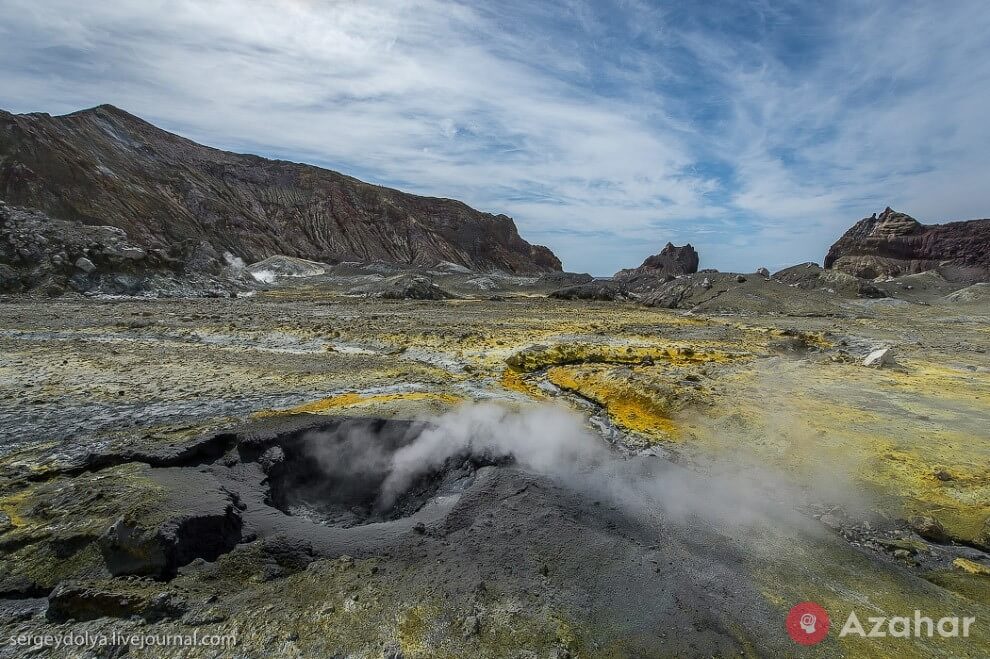 In some failures the bubbling of boiling water. 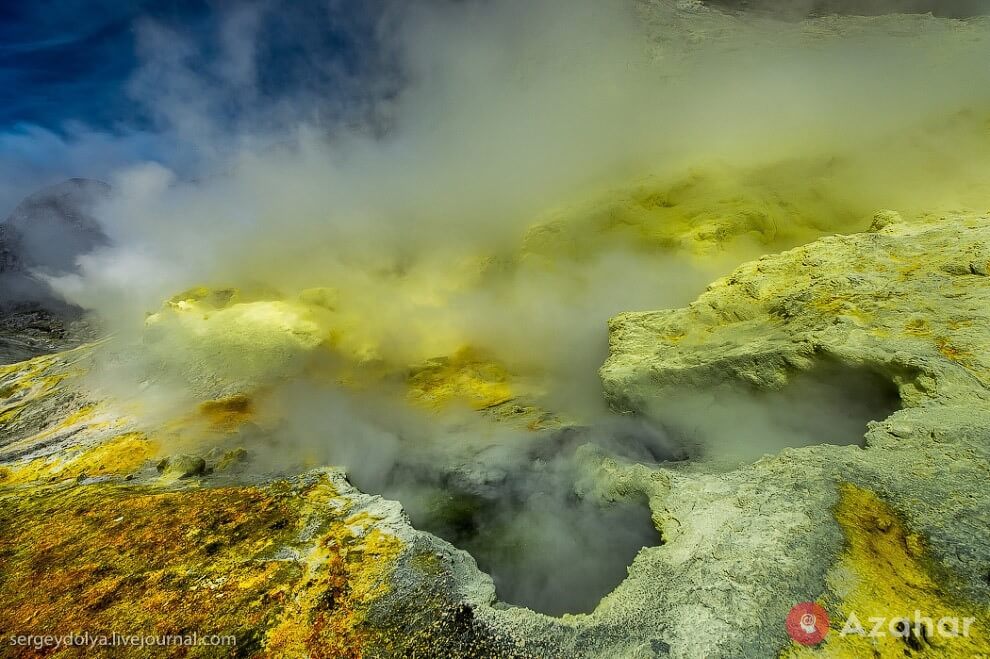 Yellow on earth forms of sulfur. 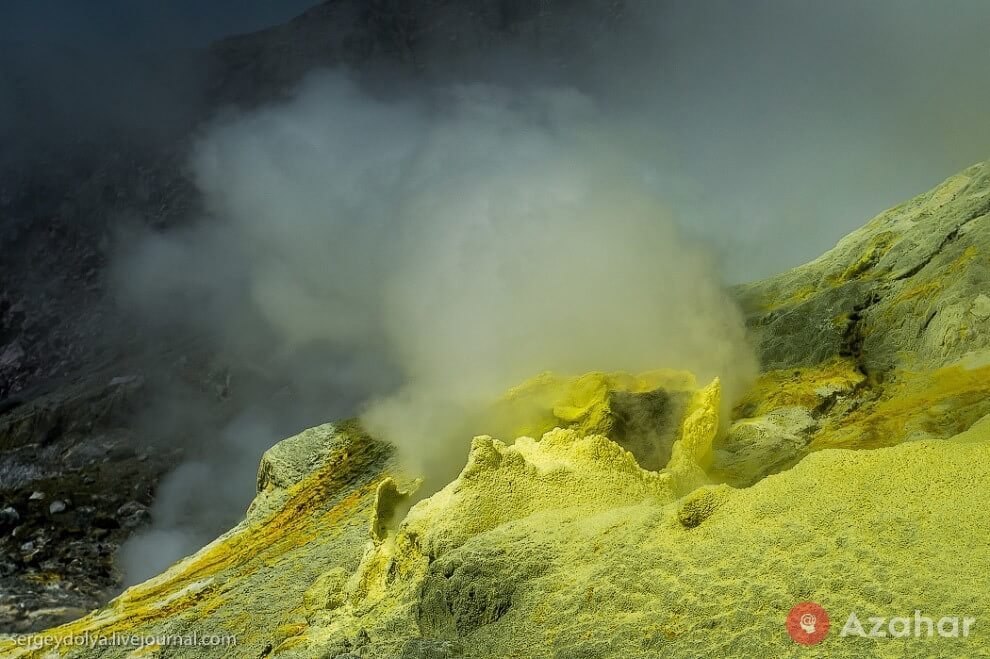 The requirement to walk on the paths caused by just in order not to fall into one of the emerging failures. 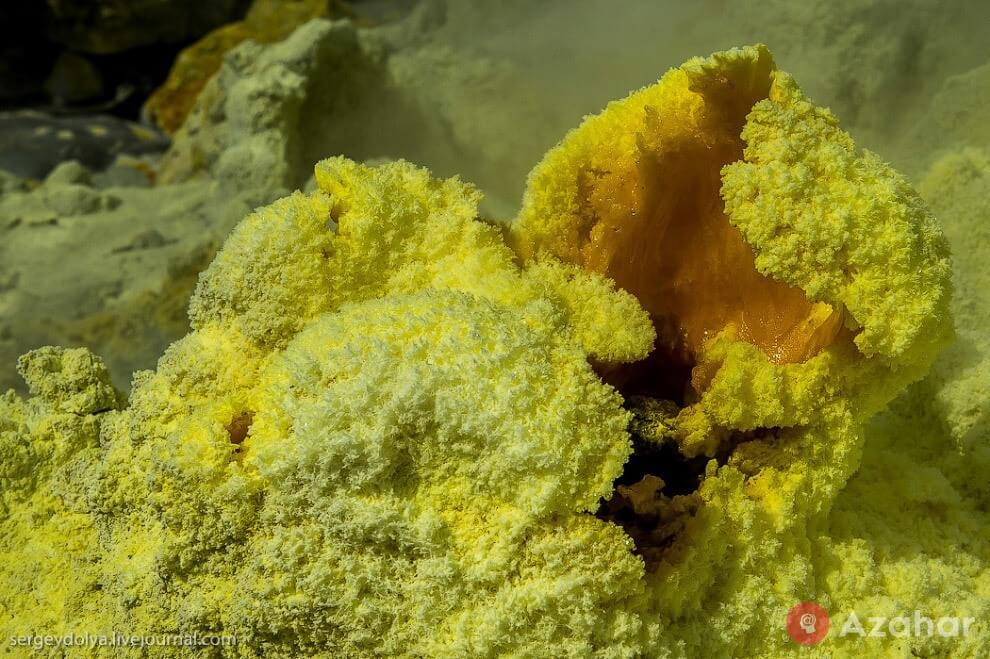 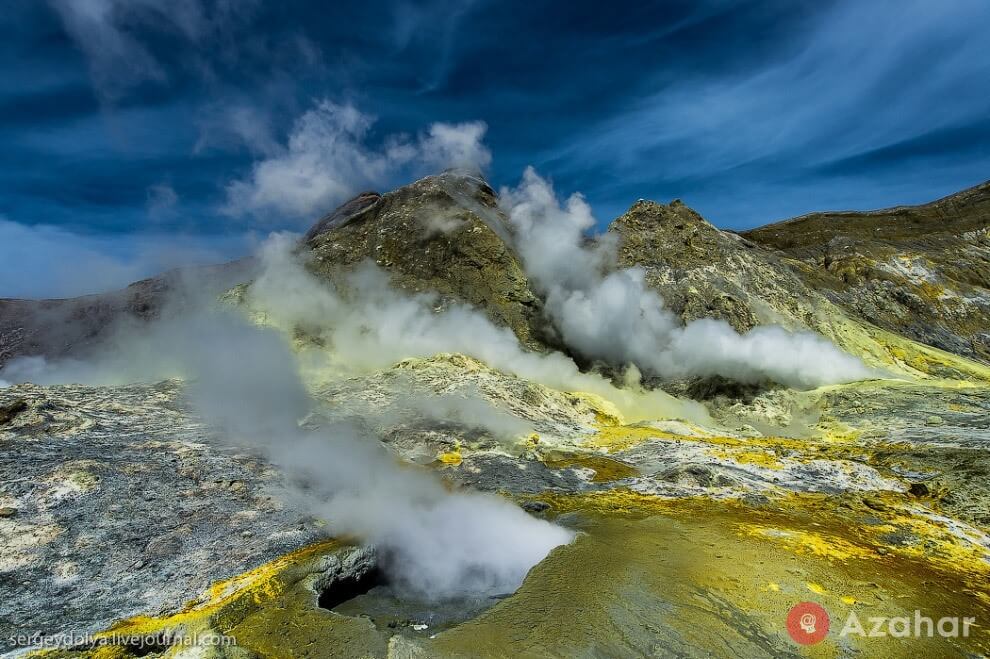 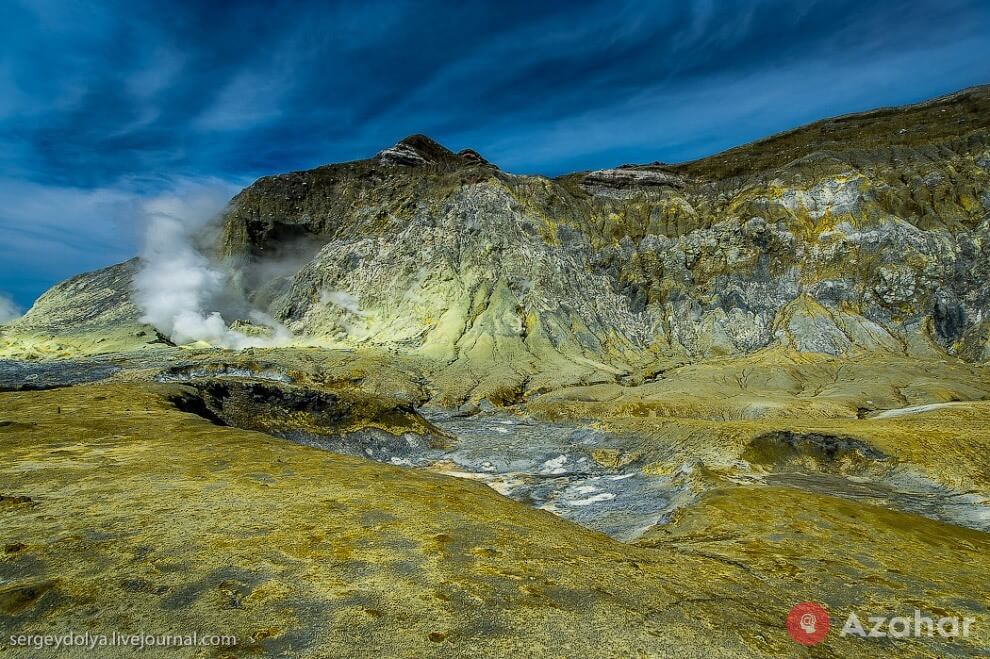 In the center of the crater is a lake. Over its surface the wind howled, pumping, blowing clouds of white steam. 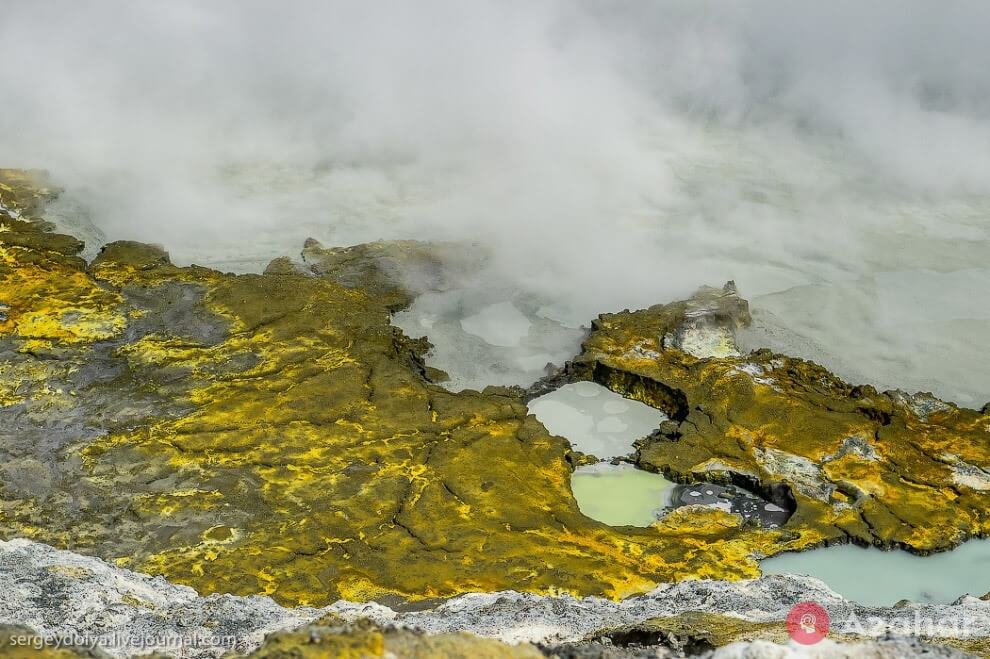 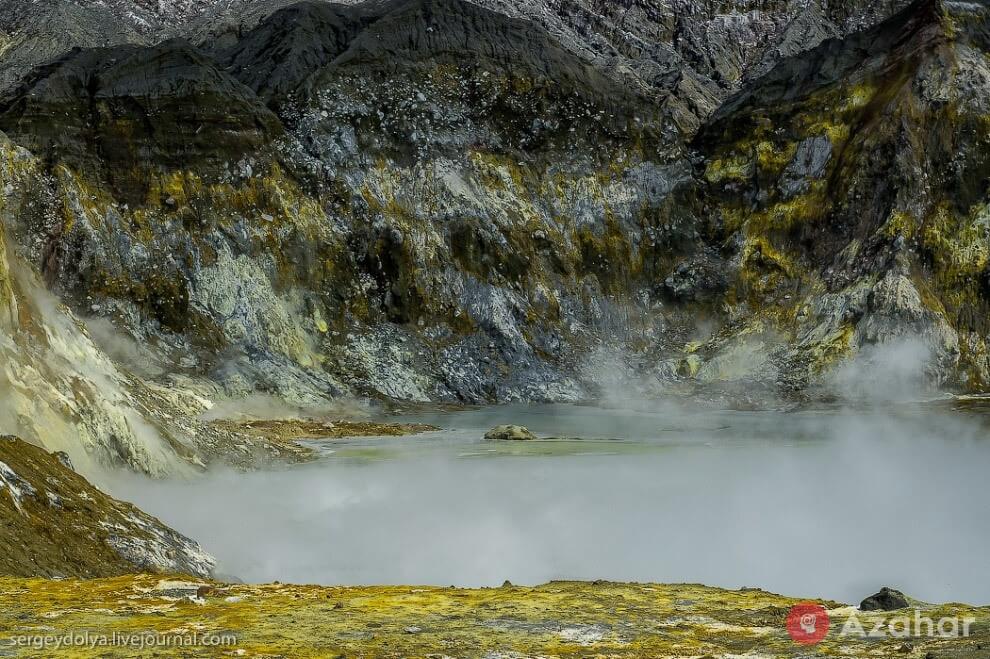 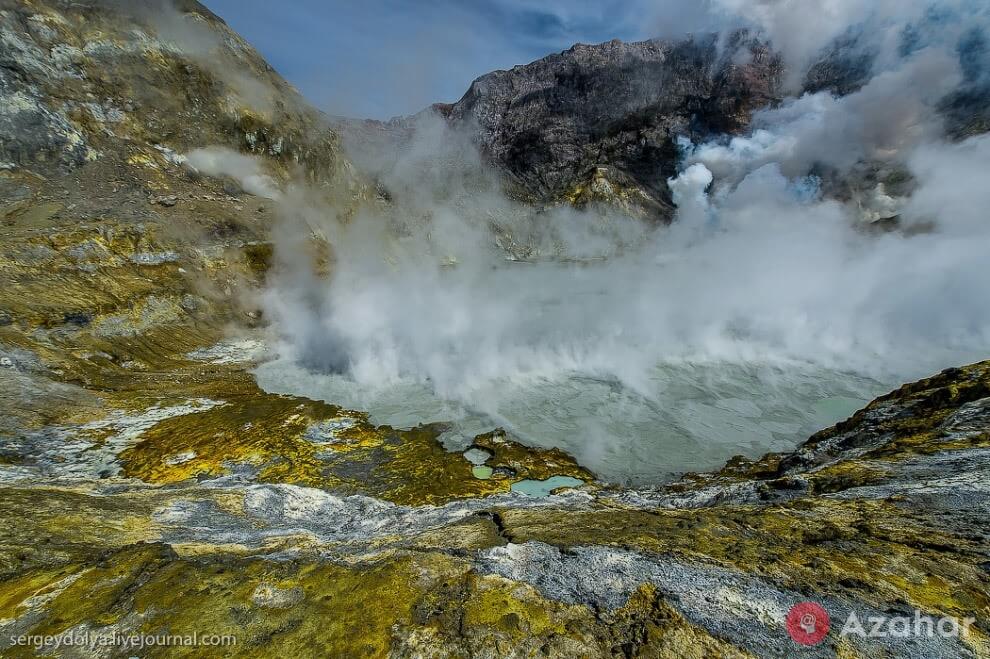 On the way met a group of tourists from the boat. The journey across the water takes about five hours. 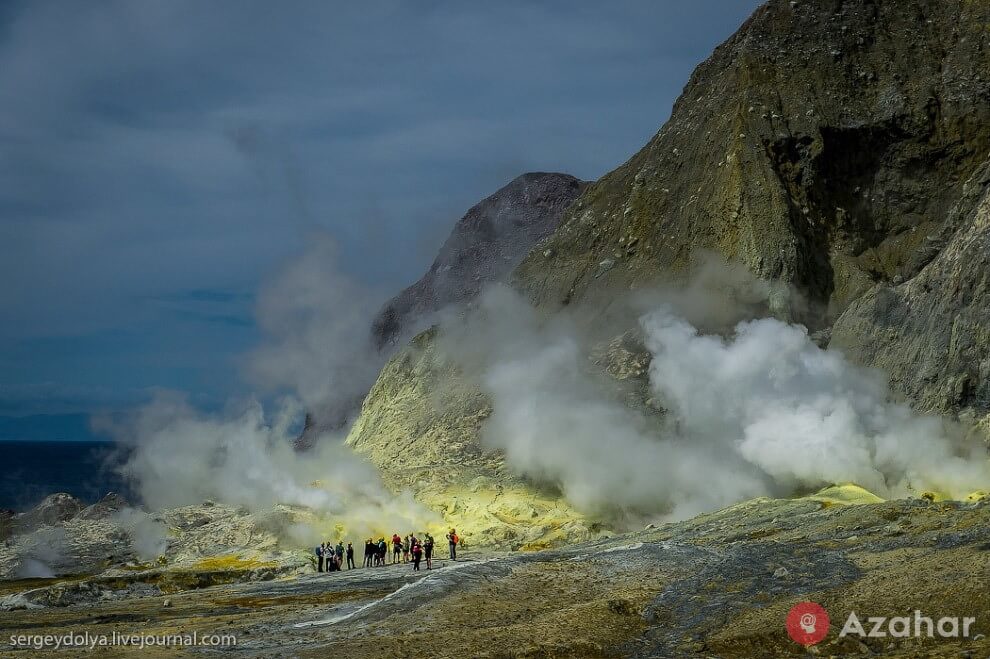 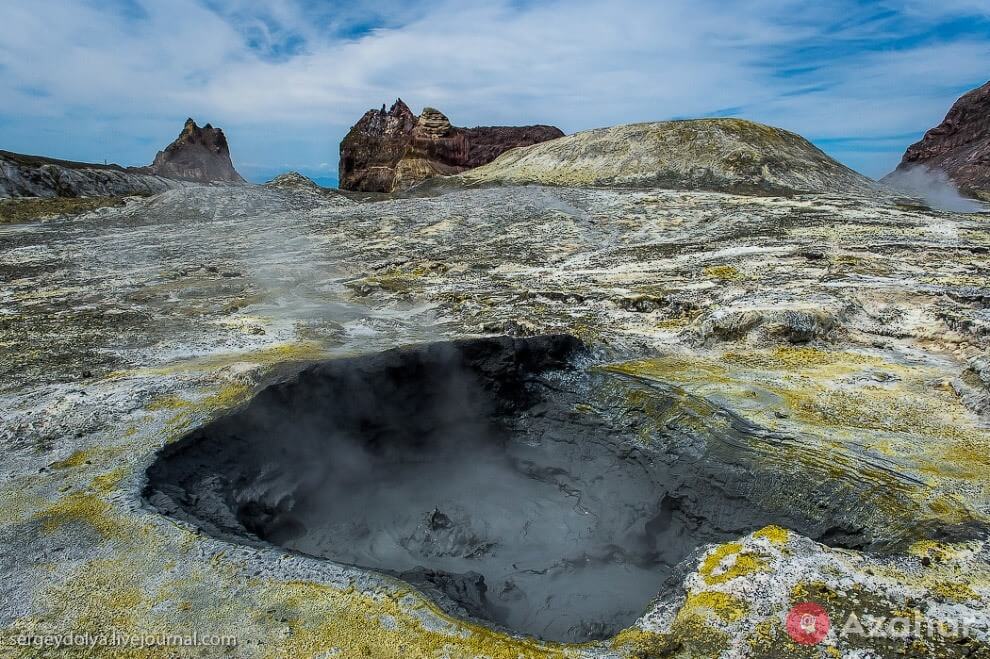 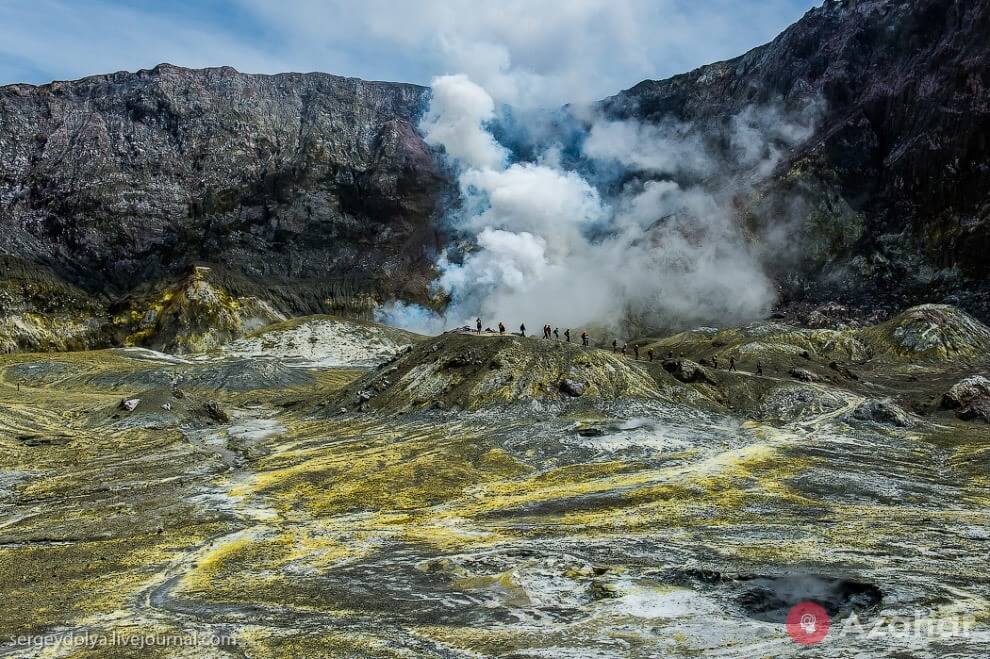 Valley of the crater. 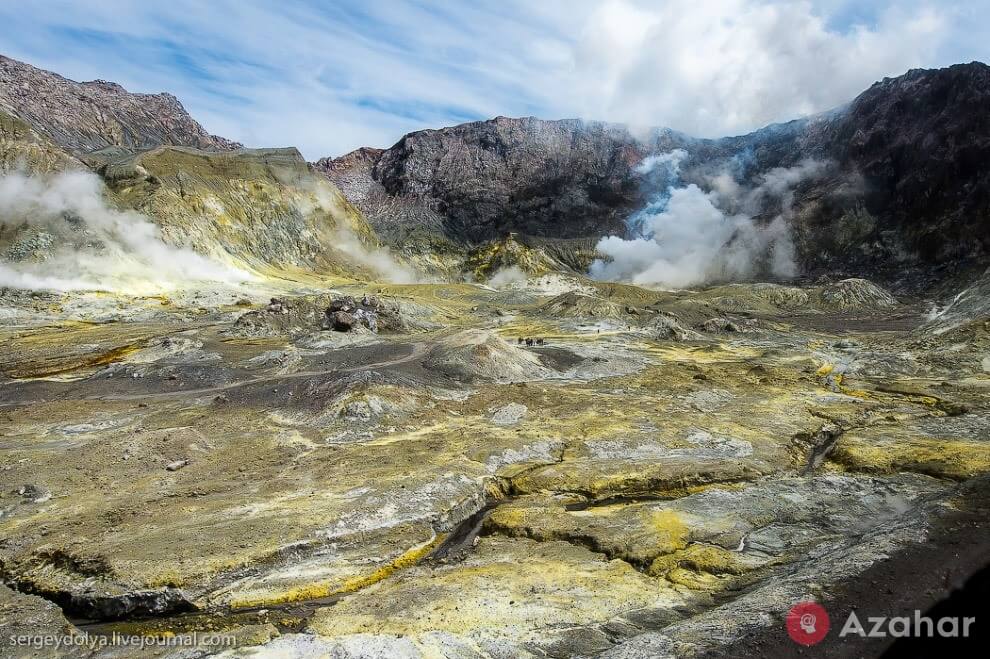 Fly away from the island. Destroyed sulfur plant on the coast. 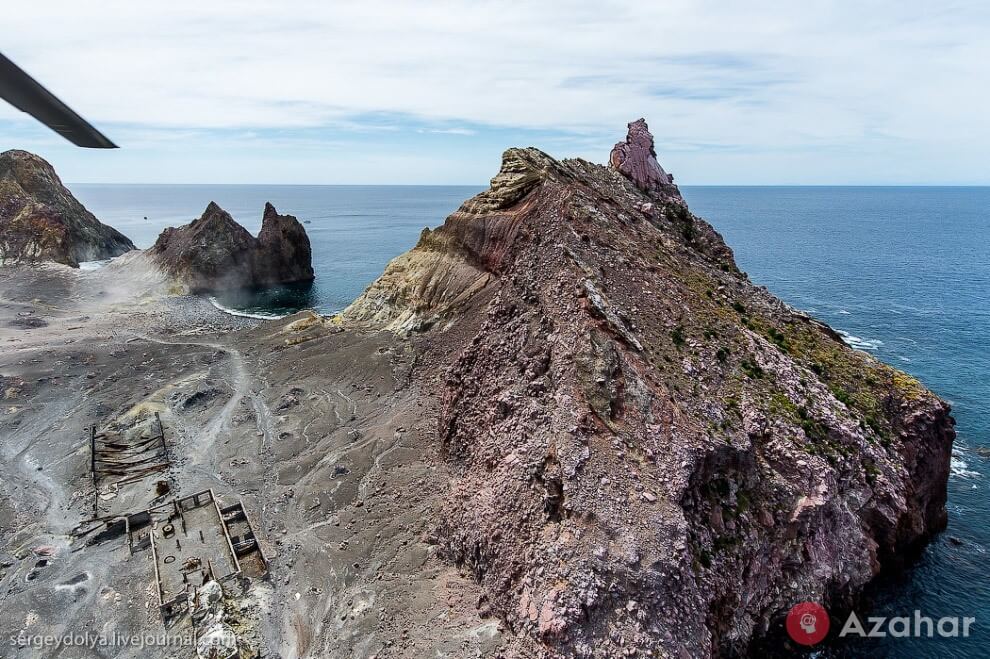 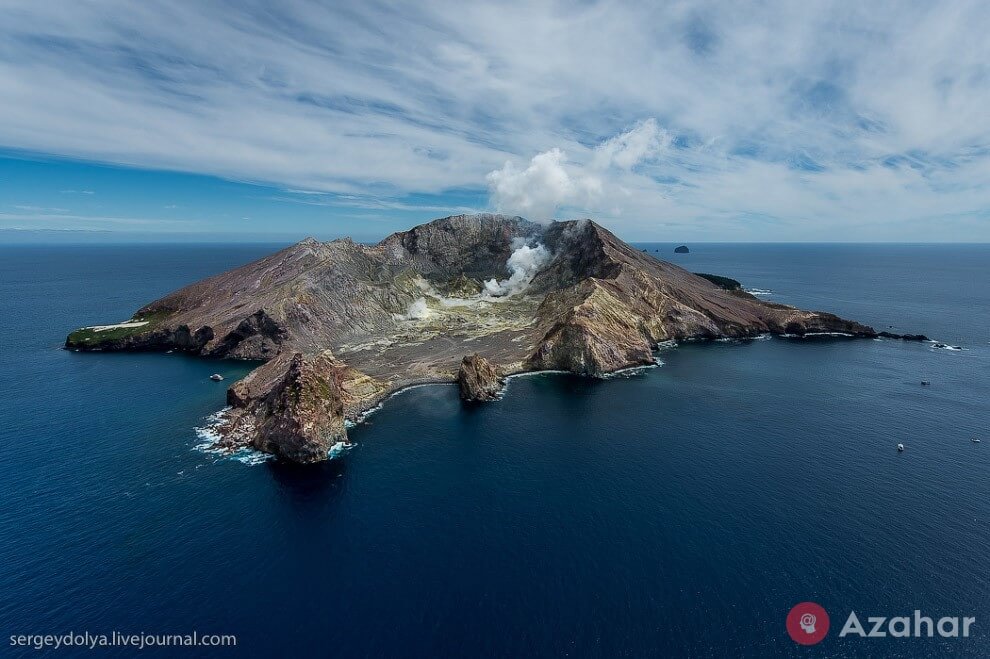