We have installed a public beta iOS 12. Here are...

The iOS 12 public beta can already be installed by anyone who has a compatible device. We checked the most interesting features of the latest version of the Apple mobile system.

Contents of the Article show
The iOS 12 public beta can already be installed by anyone who has a compatible device. We checked the most interesting features of the latest version of the Apple mobile system.
iOS 12 – how to install a public beta?
iOS 12 – what’s new?
1. iOS 12 works faster.
2. iOS 12 – the grouping of notifications.
3. iOS 12 – Time before screen function.
4. iOS 12 – improved Do Not Disturb feature.
5. iOS 12 – automatic updates.
iOS 12 – Any other functions?

iOS 12 was presented just a few weeks ago at the WWDC conference. From yesterday, the trial version can be tested not only by developers but also by ordinary users.

The conditions are two, you need to register in the program on the manufacturer’s website and have one of the devices that will receive iOS 12 in the fall. The list is substantial because it covers the same devices as iOS 11. They are:

After registering in the program or logging in, if you have used it before, we need to download the appropriate profile to your device by clicking on the compatible device in the enroll your iOS device link. Then we get the iOS 12 exactly the way we do it for regular updates.

Traditionally, we do not recommend installing the beta version of the system on the main device. Last year, many users reported problems, including members of the Spider’s Web editorial office. Azahar noted the problem with the WiFi module and factory reset in iPad 10.5. My iPhone 7 turned into a brick one day when trying to return to the regular version of the system.

This year I decided to use i5’s already aged iPhone 5 to test. This is the weakest device on the list of Apple phones that will receive the next version of the system.

This year iOS did not have many significant changes. Already in April, we could read the reports that in 2018 the optimization of the system will be the most important.

iOS 12 is supposed to work much faster on older devices, also on the iPhone 5s presented nearly five years ago. During the WWDC, some attractive statistics were dropped. Switching to the camera mode by shifting on the lock screen is to be up to 70 percent. faster. 50 percent of the keyboard display should be faster. 2 times faster application startup. Is it visible on the iPhone 5s?

Definitely! The old iPhone gained liquidity. If the first launch of the camera in the way described above did not herald that Apple intends to keep his word, then the next time you notice, you can quickly use the camera. The applications run equally smoothly. It’s difficult to measure time because it’s probably milliseconds, but every user should feel the difference in the speed of the older iPhone.

Many owners of Apple devices waited for this function. Clutter in notifications made me just turn some of them off. Grouping will please anyone who has ever seen dozens of notifications about messenger messages after waking up.

How does grouping work? Notifications from a given application form a stack that we can expand after clicking on a balloon. We can re-order the expanded prism by clicking Show less. 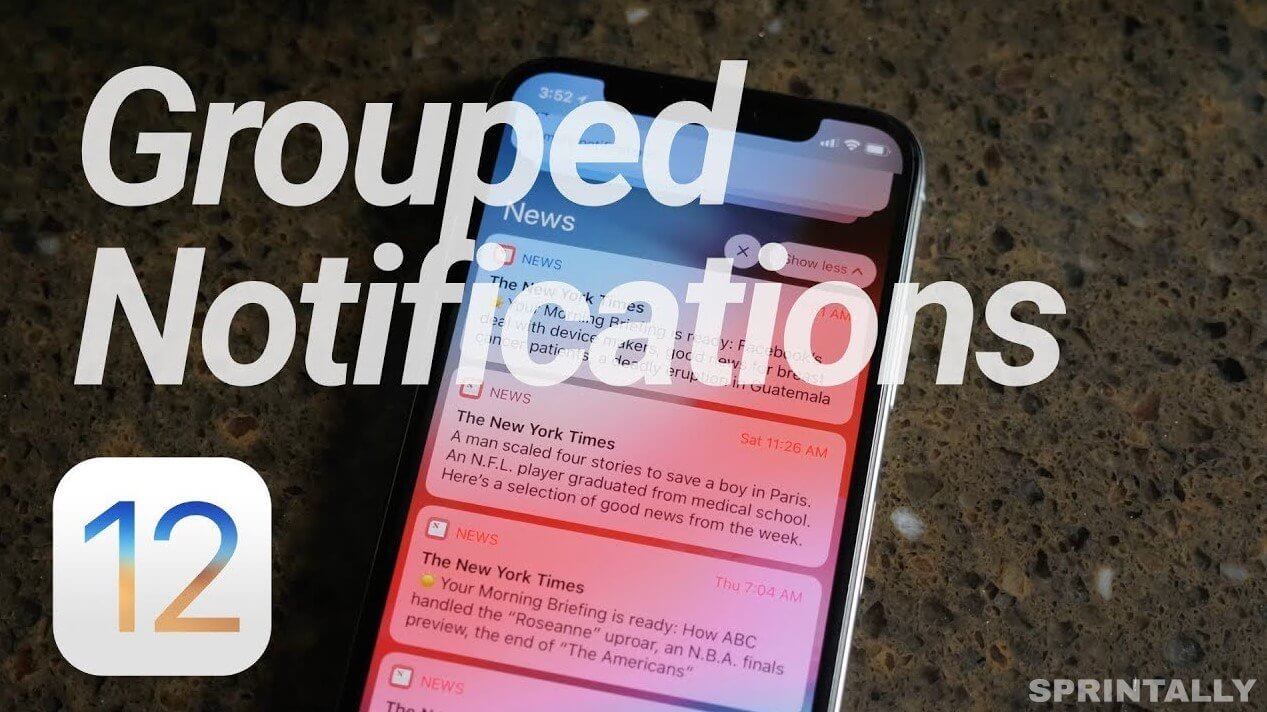 In addition to the option of going to a message, clearing notifications in iOS 12, we also gained the ability to manage notifications. After selecting the option Manage, we can completely disable notifications from the given application, as well as choose the option of delivering them silently, then they will not be displayed on the locked screen. 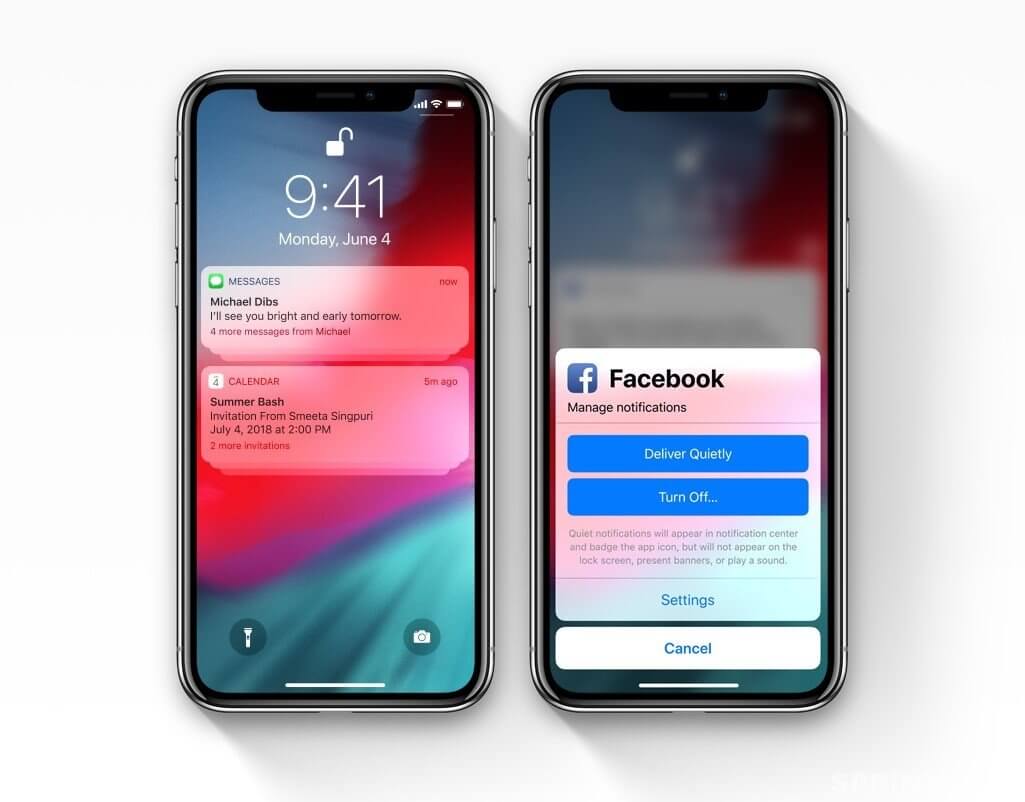 Control of time spent with a smartphone is this year’s theme. First, the company from Mountain View presented the Google Wellbeing function. Later at WWDC, there was a preview of the Screen Time function.

What is it about? We receive reliable statistics on the use of the phone. We can enter the dashboard from the level of the widget or settings. The report received covers the day or the last 7 days and may apply to the device we are currently using, as well as to other devices assigned to our Apple ID. 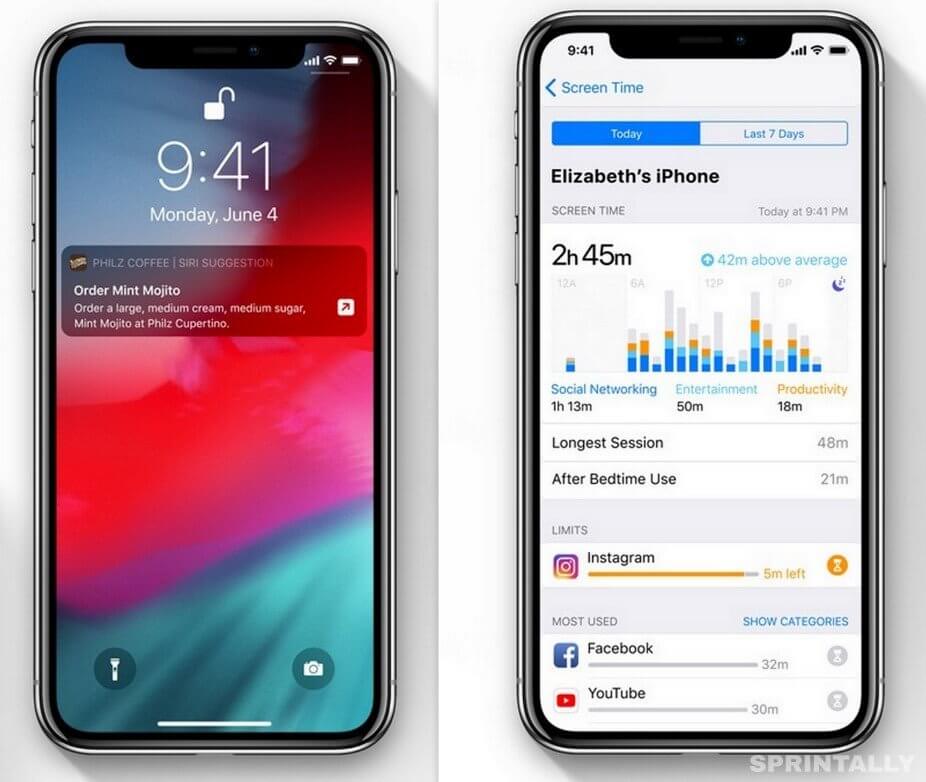 We will see aggregate statistics divided into categories of applications. The list of applications that we use most often. The following information is very suggestive: Activations of the screen will show how many times the display has been turned on, and notifications of the number of the latter in the selected period.

In addition to knowledge, we get several tools. The Time without device option allows you to create a schedule. Only calls and applications selected by us will be available at any given time, added to the Always Allowed list. We can also limit the installed applications. A division into categories has also been introduced here: education, productivity, creativity, entertainment, etc. 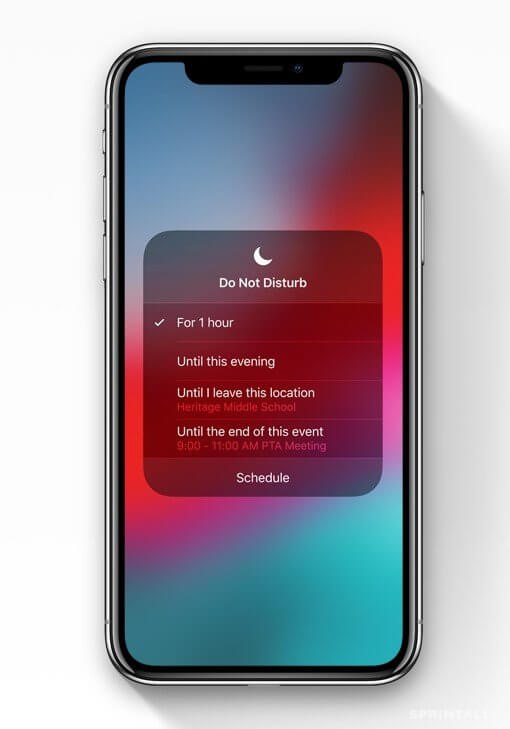 The latest novelty is “small and enjoys”. iOS 12 introduces automatic updates. This means that we will not have to manually update the system to the latest version each time, it will update itself. This option can be turned off. To do this, you have to go to Settings >> General >> Updates >> Automatic updates.

iOS 12 brings more news. Among them, you can mention group calls FaceTime with up to 32 people, new Animoji in iPhone X, improved sharing and photo search. That’s not all: you can find the full list on the Apple website.