10 most amazing and interesting facts about birds

Modern people are increasingly moving away from nature. And, probably, few people pay attention to birds. Although they see them every day, they are always there. They are an important integral part of the living world. It is very exciting to watch them.

Contents of the Article show
These are the 10 most amazing and interesting facts about birds
1. No bird will tolerate intrusion into its home by uninvited guests
2. To keep themselves safe, chickens sometimes pretend to be dead
3. Hawk’s eyesight is 8 times better than that of humans
4. Flamingo could live to be 83 years old
5. Gulls can drink saltwater
6. Hummingbird eats 2 times more than its own weight per day
7. There are 6 species of venomous birds in the world
8. Birds don’t sweat
9. The body temperature of birds is 8 degrees higher than that of humans
10. An ostrich’s eye is larger than its brain

These are the 10 most amazing and interesting facts about birds

1. No bird will tolerate intrusion into its home by uninvited guests 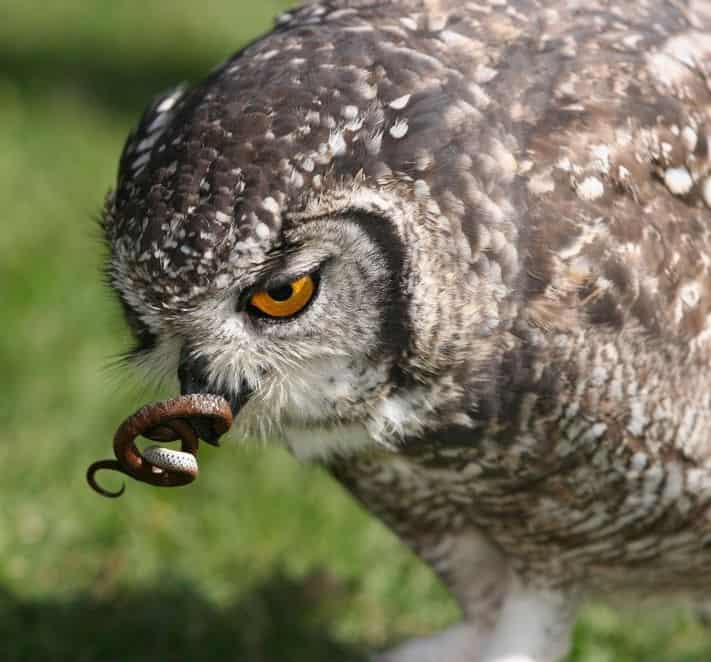 North American scoops are an exception. They especially carry small snakes to their nests. They look like large earthworms in appearance. Plus they are completely blind. Owls feed on mice, beetles. They bring their prey to the nest. Owl food attracts the attention of insects.

Therefore, at night, scoops bring snakes to their nests. Those, in turn, eat flies and ants, which encroach on owls’ food. It turns out a little confusing scheme, but this is how owls save their food from insects.

2. To keep themselves safe, chickens sometimes pretend to be dead 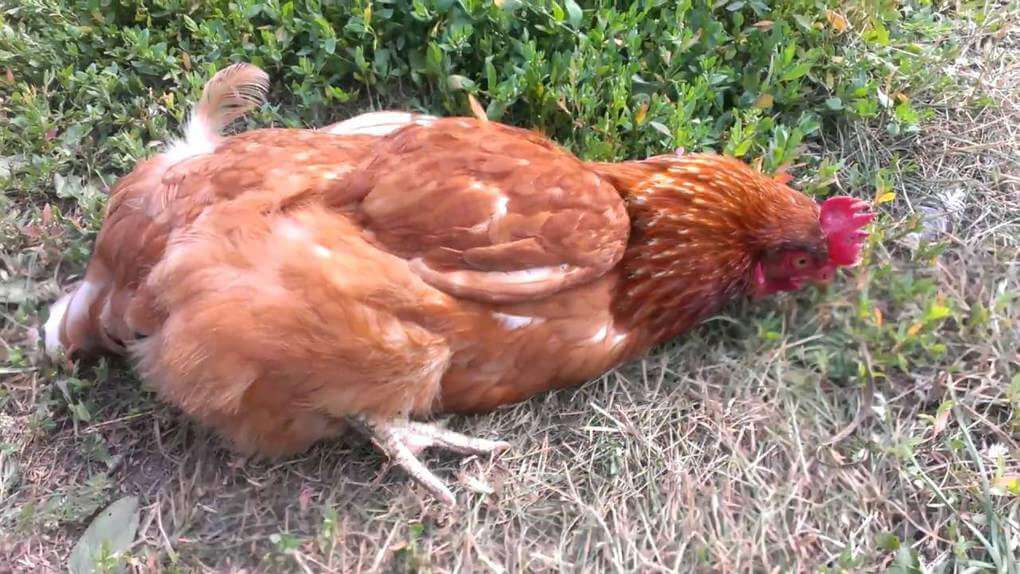 At the sight of danger, the chickens put on a reality show like they pretend to be dead. The purpose of this pretense is clear and understandable. In many animals, the instinct of self-preservation is developed very strongly. But this mechanism cannot be solved even by scientists.

Many people know that a chicken can be hypnotized. To do this, put the bird on its side, hold its paws. It calms down and lowers its head to the surface. At this point, a piece of chalk is brought to its head and they draw a line from the chicken’s beak. It falls into a daze. Of course, this is not hypnosis. The chicken gets scared and pretends to be dead. The fear is so strong that it freezes. Ornithologists attribute this to instincts.

3. Hawk’s eyesight is 8 times better than that of humans 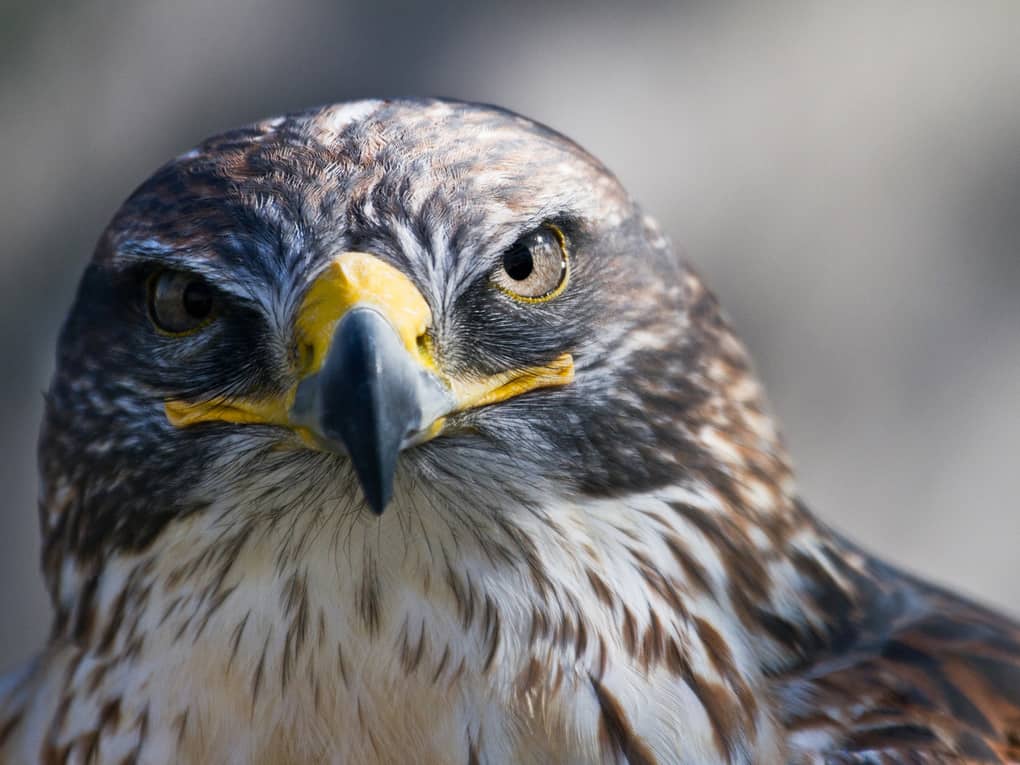 Hawks and other birds of prey have excellent eyesight. They can see at very long distances, they can see the smallest details. The eyeballs are round, which is why they are so farsighted. The hawk retina contains many hypersensitive cells. They have an area of ​​visual acuity – a depression, a central fossa.

It is concave, because of this, the image is enlarged up to 30%. Their retina is 5 times more sensitive than that of humans. In addition, the cornea of ​​these birds is flat rather than convex. As a result, more images are formed on the retina. Hawk sees clear pictures. When moving rapidly, objects do not merge into a blurred spot.

4. Flamingo could live to be 83 years old 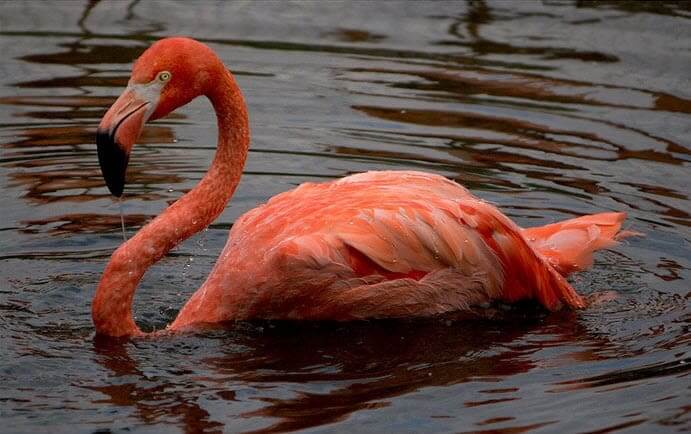 The bird lived in the zoo of the city of Adelaide, Australia. It was the only pink flamingo in the country. Its name was Greater. It appeared at the zoo in 1933, and in 2014 it had to be euthanized. The flamingo’s health was undermined, it suffered. They tried to treat it, but the veterinarians could no longer help.

The deterioration of the bird’s health is associated with an attack on it in 2009. It was committed by some young people. Head, beak, and eye were injured. In natural conditions, the lifespan of a flamingo is 25 years. With good quality of life, care, and safety of the bird, It lives much longer. 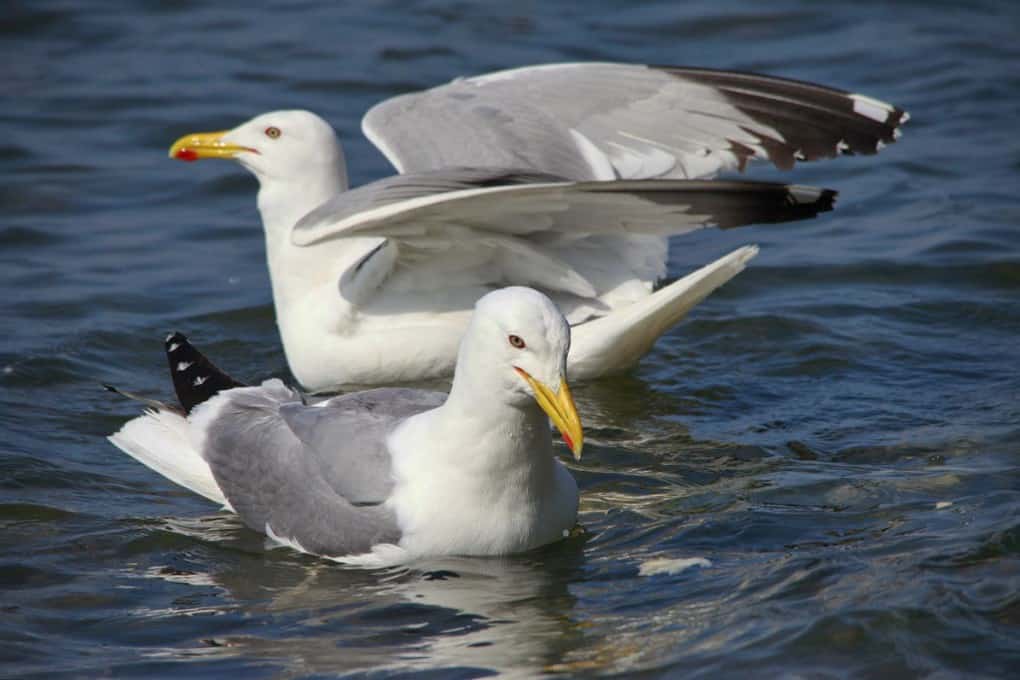 Scientists did not agree with this observation of the sailors for a long time, they assumed that the birds did not swallow it, but only gargle, then spit it out. But seagulls can actually drink salt water. They have a special supraocular gland. It can remove salt from the blood of seagulls, forming a salty liquid. It is excreted through the nostrils.

This ability allows seagulls to live. Otherwise, the birds would have died out long ago or changed their habitats. Of course, if there is freshwater, the gulls will choose it. To process salty, a lot of energy is needed.

6. Hummingbird eats 2 times more than its own weight per day 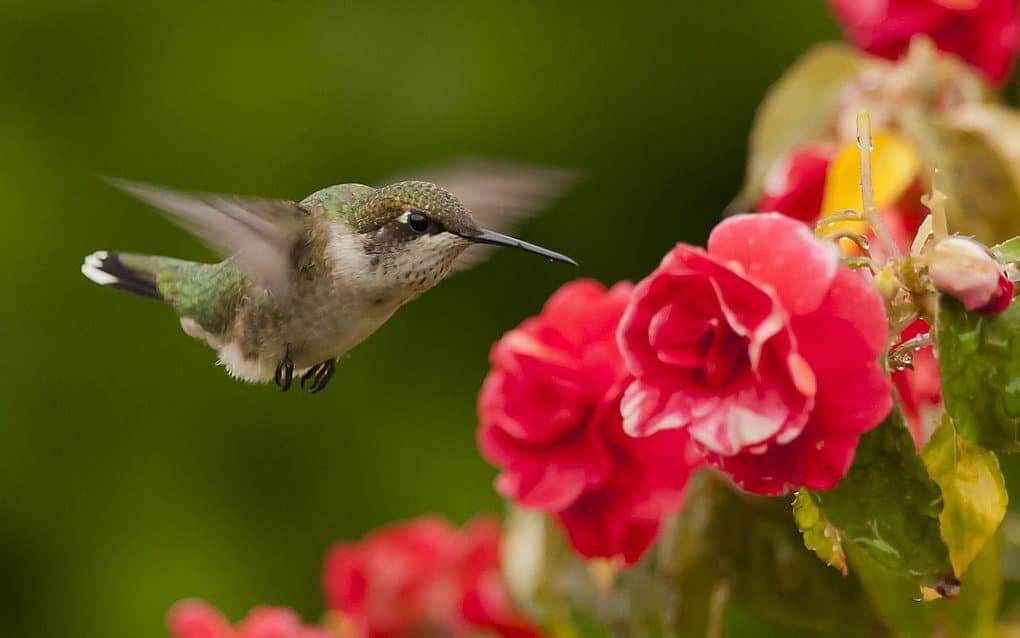 The hummingbird is the smallest bird, weighing 1.6 grams. But its flight speed is very high, reaching up to 80 kilometers per hour. During the flight, it needs a lot of energy, the amount eaten per day exceeds its weight by 2 times. They feed on plant pollen and nectar. They contain enough carbohydrates.

Hummingbirds replenish their protein reserves by eating small insects. There are more than 350 species of hummingbirds. They all feed on the nectar of different plants, so their appearance differs, particularly the shape of cranberries. Their distinctive feature is that birds feed only on the fly.

7. There are 6 species of venomous birds in the world 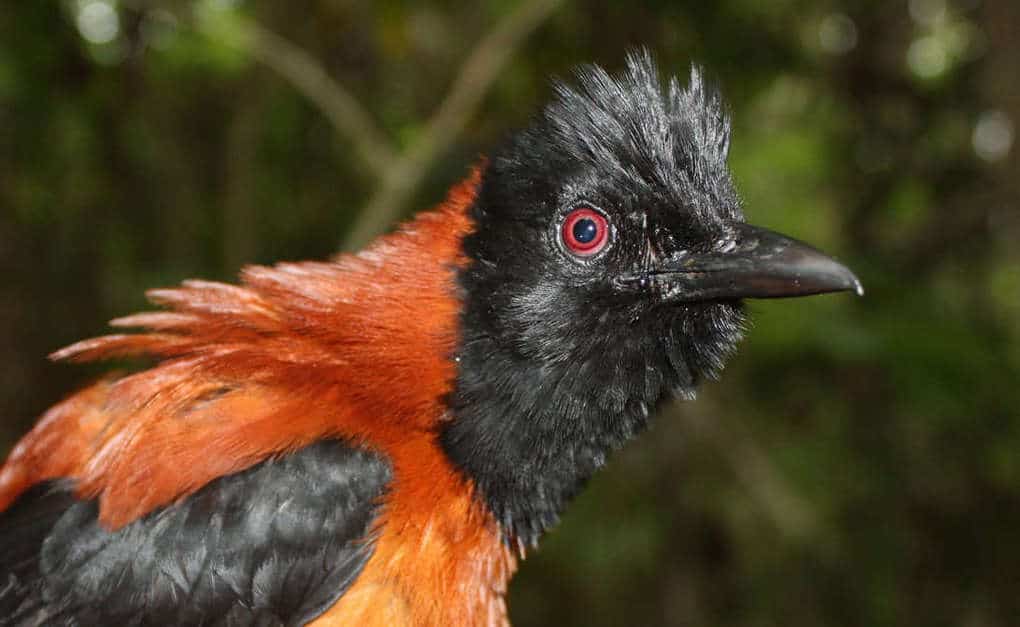 Poisonous birds are quite unusual. There are 6 types of them in total. Their toxicity is “passive”. Harmful substances affect only those who decided to eat those birds. Five species belonging to thrush flycatchers. Their habitat is New Guinea. The poison zootoxin accumulates in their feathers and body. They were first discovered in 1989.

Among the sixth birds, the blue-capped ifrit also lives only in New Guinea. Contact with poisonous birds causes tingling and numbness. They become poisonous due to feeding on beetles containing toxic substances. It does not harm birds, they have developed immunity. 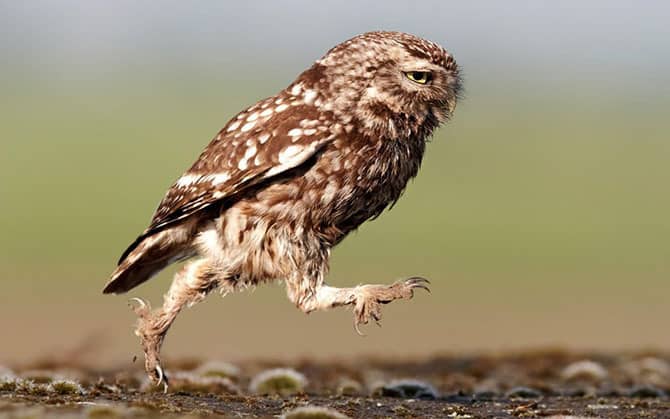 Birds are incapable of sweating either at rest or in flight. Nature has created their bodies as light as possible. The skin is thin and dry. They have no sweat glands at all. There is only one coccygeal secretion – feather lubricant. Body cooling occurs due to a well-developed respiratory system.

We can say that they sweat from the inside out. This is due to the air sacs that are outside the lungs. They are similar to soap bubbles, found in the neck, shoulders, pelvic region, and even penetrate the bones of the limbs. In especially hot weather, the flapping of the wings helps to cool down.

9. The body temperature of birds is 8 degrees higher than that of humans 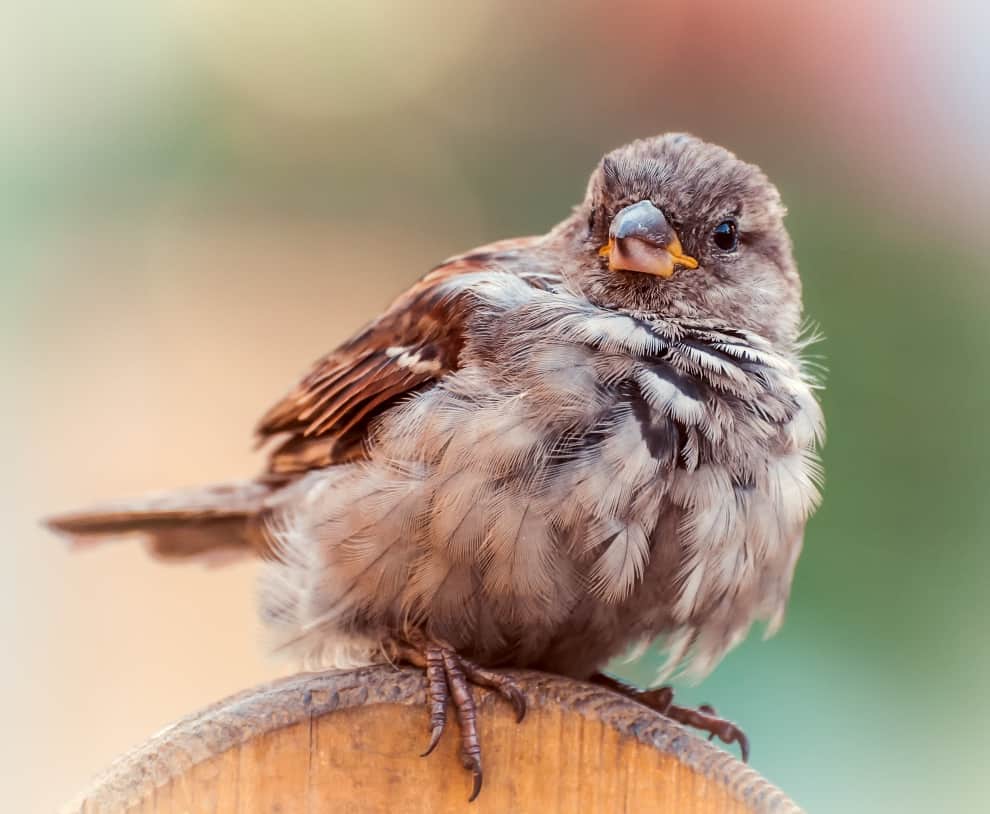 In birds, thermoregulation is well developed, the internal body temperature is always approximately the same. Its value can vary from 40 to 43 degrees. It depends on the type of bird. This feature is explained by a fast metabolism. All processes in them proceed much faster than in humans. The heart rate is increased, muscle fibers are often contracted, they do more work per unit of time. This gives them the ability to fly.

Also, a high body temperature is necessary for incubating eggs. It shortens this dangerous period. The hatched chicks need warmth, their thermoregulation has not yet been established. Adult birds are forced to warm them. Body temperature fluctuates under the influence of external and internal factors. So at night, it is 5-6 degrees lower than during the day.

10. An ostrich’s eye is larger than its brain 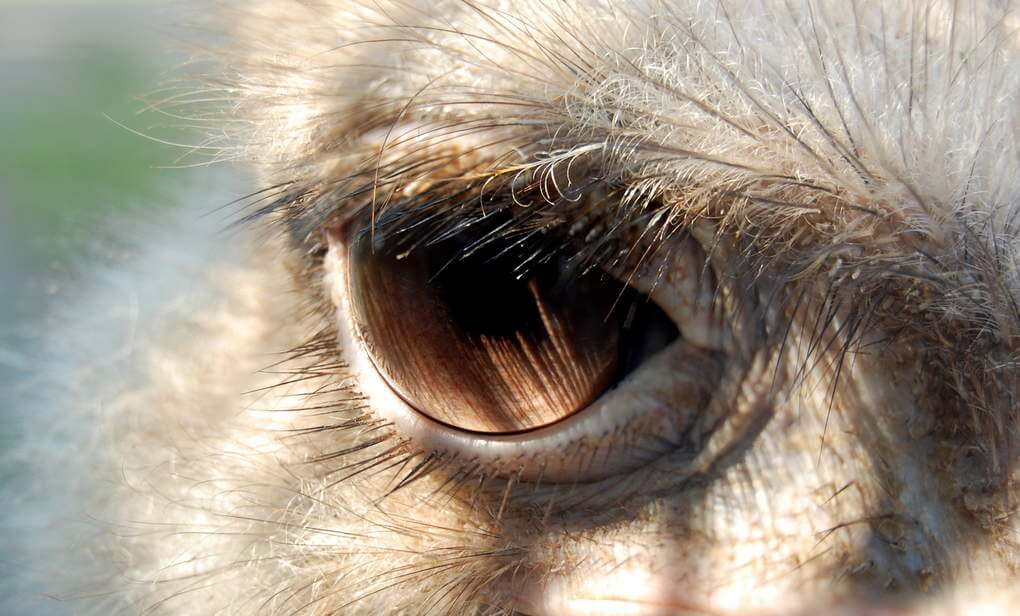 This fact has been confirmed by scientists. The average weight of its brain is 42.1 grams. The weight of one eye is 47.6 grams, of two, respectively, 95.2. They are large in size and can see not only what is in front, but also what is on the sides. They received such an advantage in the course of evolution. To ensure the viability of the ostrich, it is necessary to hunt, at this time enemies can attack it.

This structure of the eyes allows it to simultaneously get food and monitor its safety. Ostriches live by instincts, their brains have no cortex. A small brain volume is enough to ensure the functioning of organs and the manifestation of instincts.