How to photograph the largest snake in Europe – the...

Largest snake: Quite often people ask me how I get one or the other frame. In this article, my experience shooting the yellow-bellied snake and a little bit backstage. In its review of the lower Volga reptiles, I mentioned this wonderful snake. Talking about biology, I will not write, there is a good Wikipedia article. [ The blogger Stanislav Shinkarenko ]

How to photograph the largest snake in Europe

The most important thing in wildlife photography is, in fact, to find the animal. Sometimes it can be difficult. We have snakes it is best to remove at the end of April — early may, at this time they have a mating season, so the activity is at its maximum. In addition, in spring the grass is still low to detect in it the snake is much easier than in the summer. But usually, you have to work hard in the search. Sometimes I walked more than twenty miles and have not seen any snakes, and once at five miles met three.

Is the snake hiding in the grass and it becomes almost invisible. This is the first reaction of the snake to approach. If the snake realizes that she noticed it with a loud hiss of an arrow and takes off running away. However, some large specimens prefer to lie until the last, then to make a surprise shot towards the man, but after most often are also trying to escape. 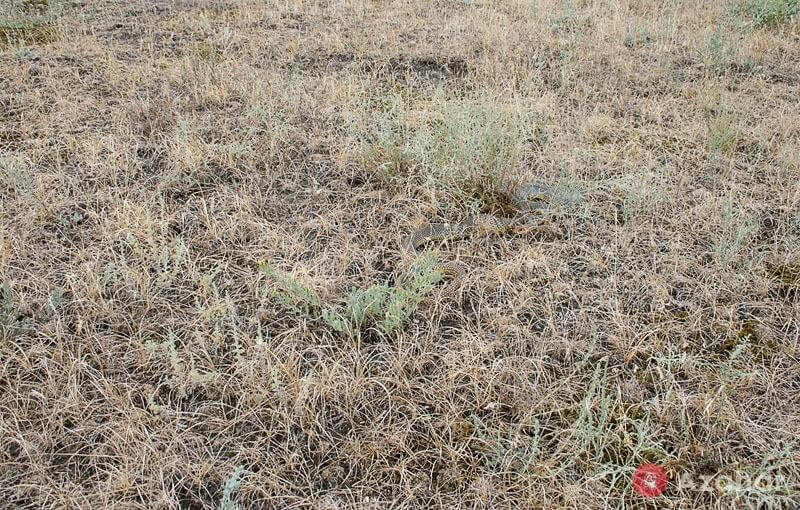 The snake took refuge in the Bush Echinops. 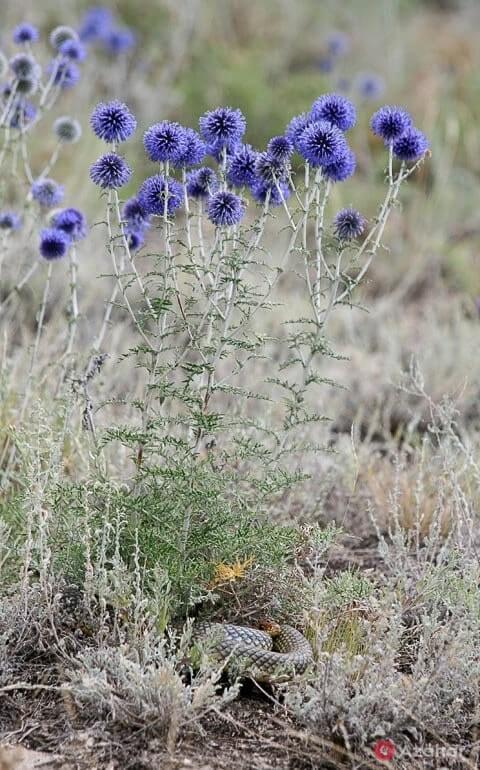 There is only one way out – to catch the snake. Here I have about one and a half meter yellow bilge. 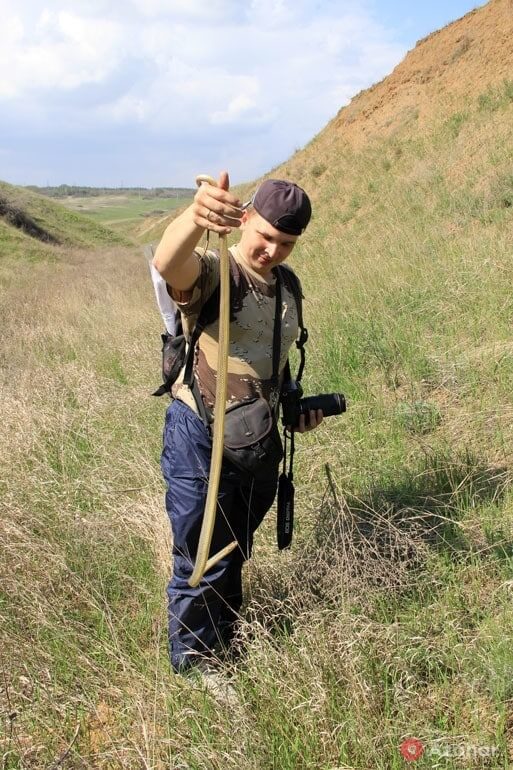 Caught yellow-belly will squirm, trying to bite. The snake is not poisonous at all, but it has small teeth, so it can bite through human skin. It is safe for yourself and for the snake to hold its base of the tail.

And this snake is the largest I’ve ever seen, its length is more than 1.8 meters. 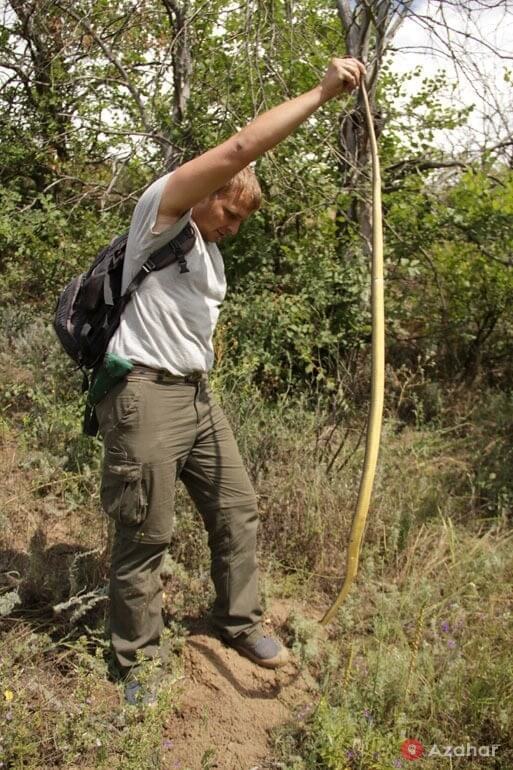 It now remains to release the snake at a convenient shooting location.

But the snake will not have to wait for his cell phone. Most likely, he will try to crawl away. If you stand a snake in the way, she will attack. 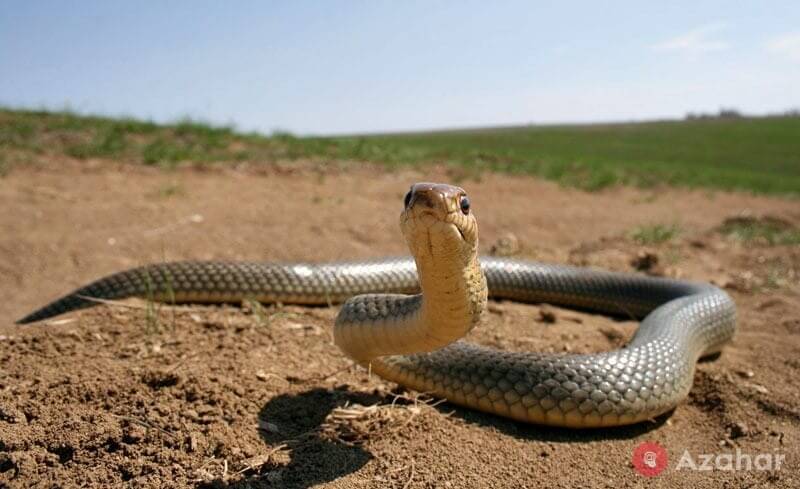 Before throwing the snake is grouped. 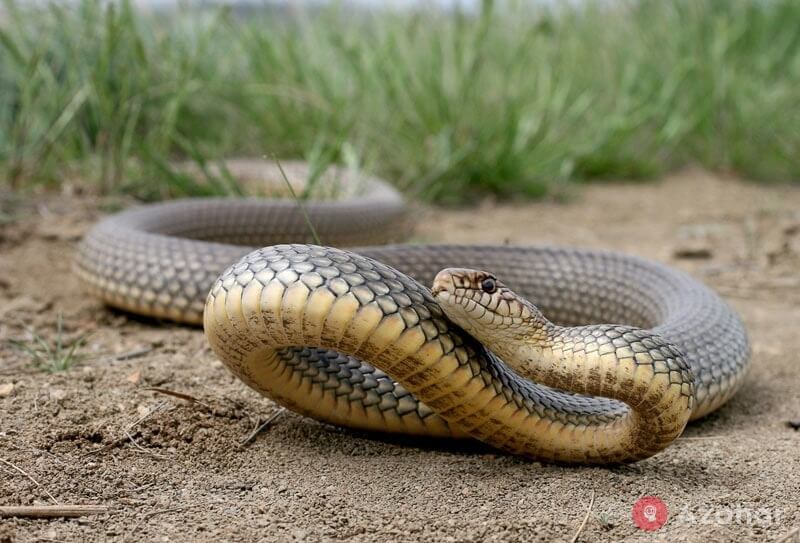 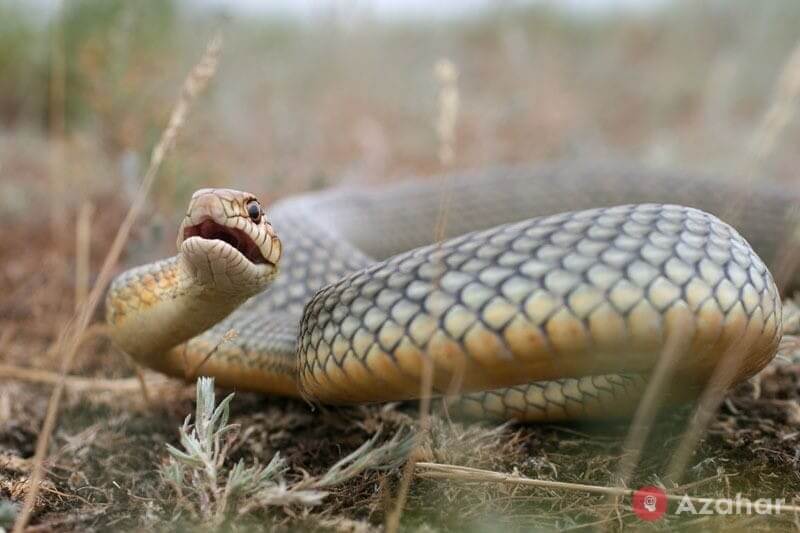 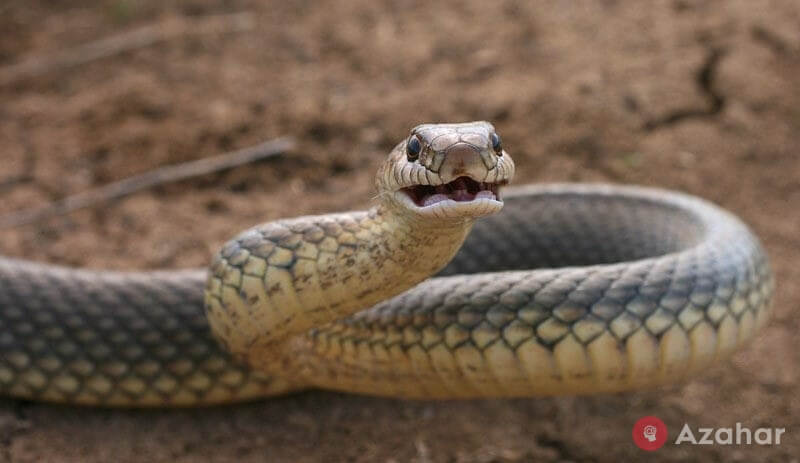 Then rushes straight into the camera lens. 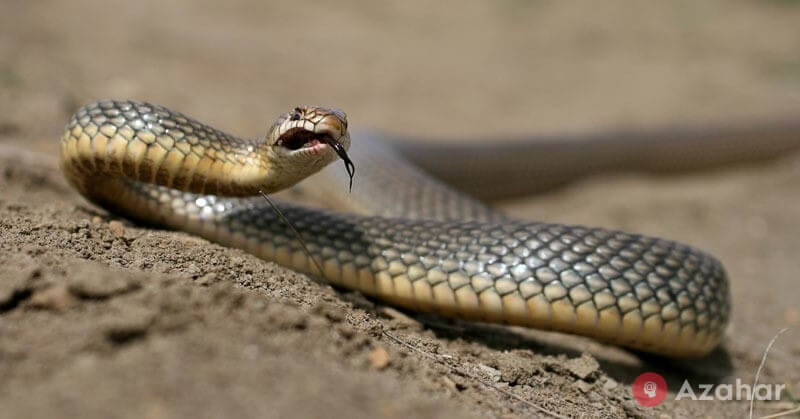 Many times I tried to catch the moment of the throw, but the snake very quickly flies the zone of sharpness. 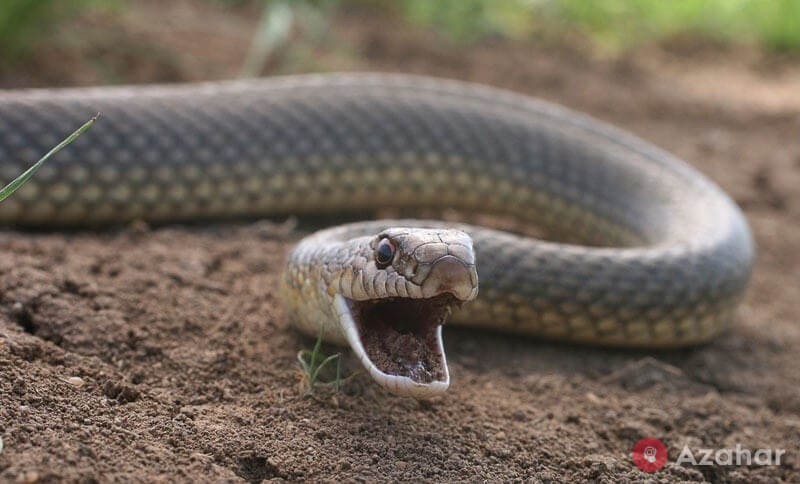 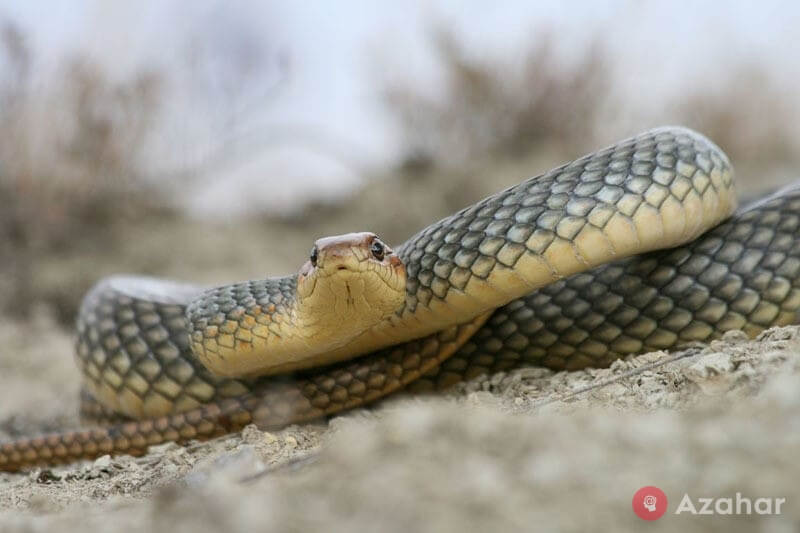 And once with my friend, we caught a very aggressive snake. 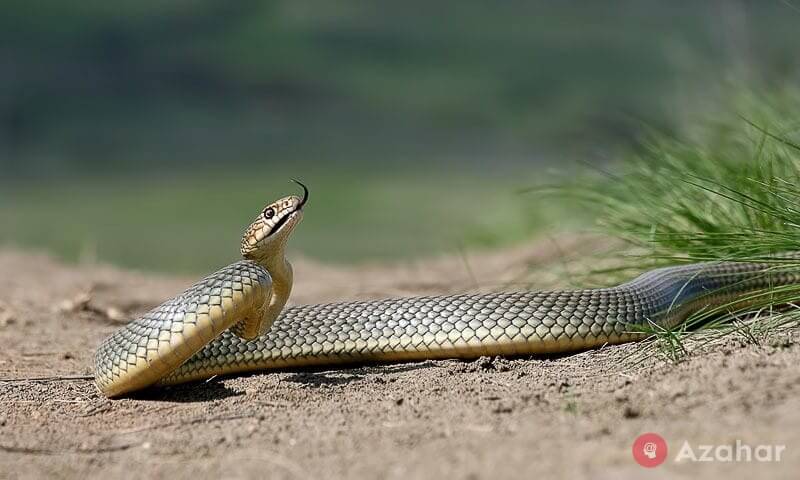 Each distracted the snake and I took a telephoto of her attacks. 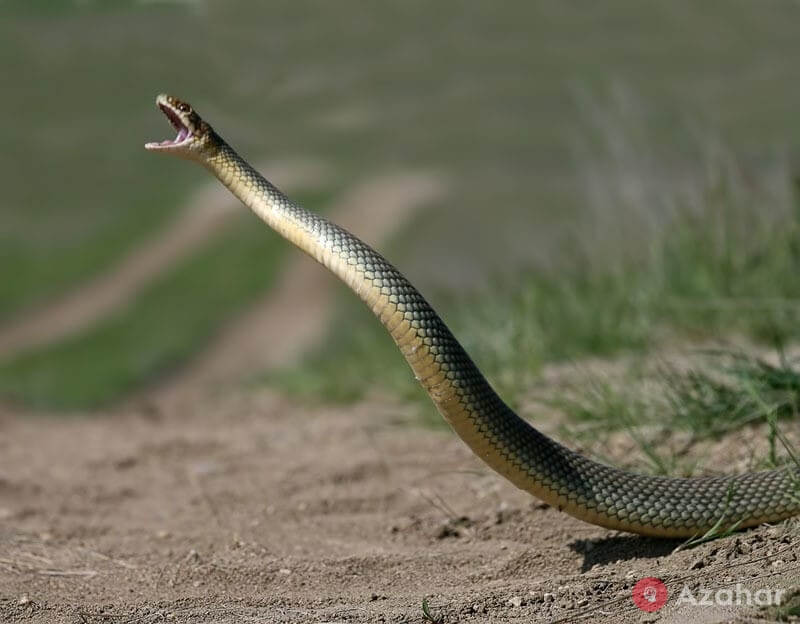 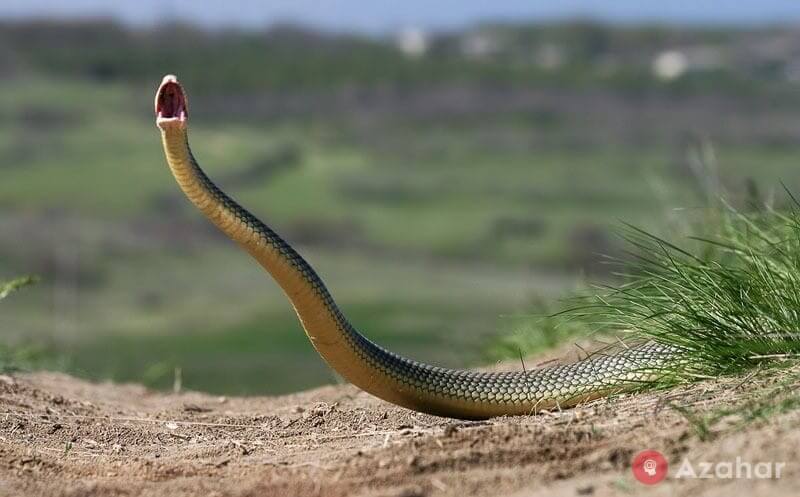 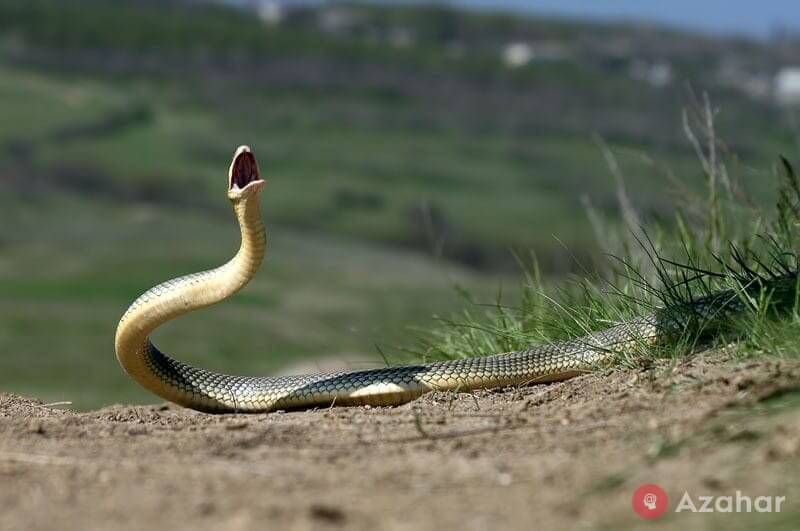 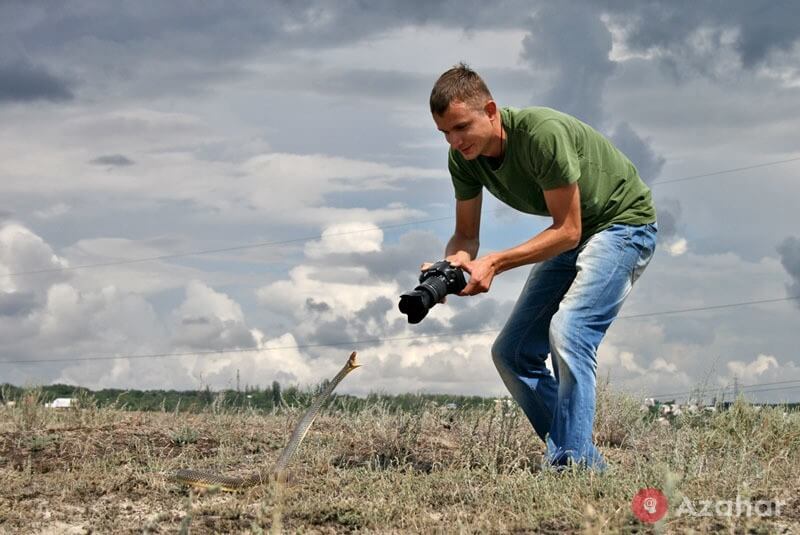 Yellow-bellied snake is a very temperamental snake, there is no need to make the effort, the reptile showed emotions. But to appease the snake — task a little harder. 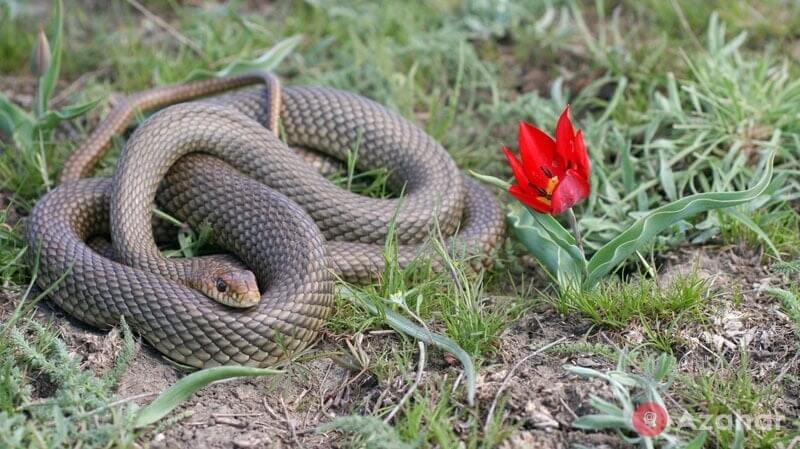 Of snakes to a meter I proceed as follows: gently rolled on the palm of your hand in a spiral, then put in the desired location and cover with palms. Feels like a snake in the shelter. Then slowly raise their arms to shoot is from a few seconds to several minutes. 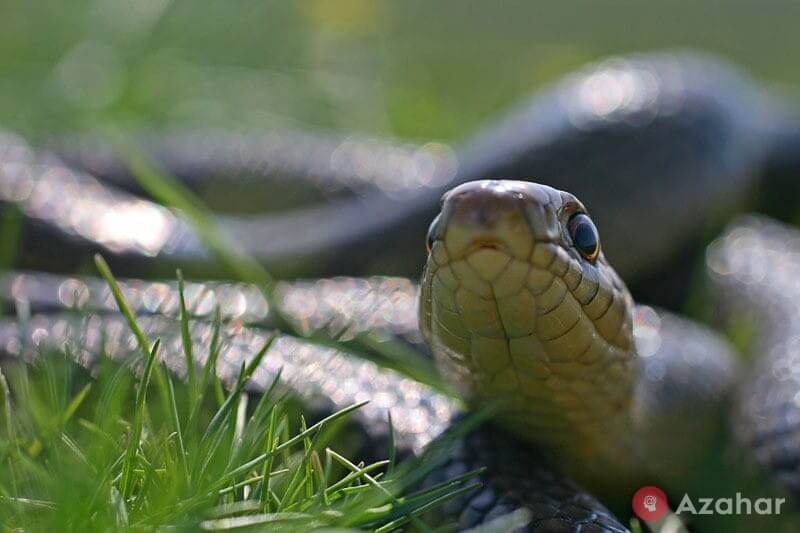 And when dealing with large instances, the cover which is not enough for four of my palms, I use the backpack. The snake voluntarily underlying on the ground the backpack in search of shelter, after that, wait several minutes, lift the backpack, and shoot.

It is important to remember: it is not necessary to torture animals during shooting. And then you must take the snake to a safe place: the Bush gully with cracks in the ground, in the colony of ground squirrels or other rodents to the reptile, was able to recover after experiencing stress.