Feijoa – the composition, the benefits and how to eat

Feijoa is a tropical plant originated in South America. It should be noted that the fruits of feijoa called berries. They have a sweet and sour taste, and they smell like a mixture of pineapple and strawberry.

Feijoa contains essential oil, the taste of which also resembles strawberry and pineapple together. But this taste is fully manifested only in ripe feijoa fruits. Their flesh becomes like jelly. It is then that she will acquire a real taste and aroma. Unfortunately, ripe fruit cannot be transported. Therefore, they remove the immature. Experts believe that the feijoa fruit does not lose its useful properties even with “artificial” ripening.

What is feijoa useful and how to eat it correctly, we will tell you today. 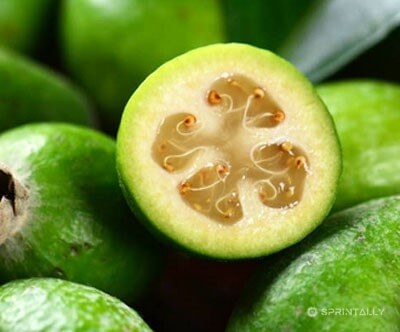 Feijoa is an evergreen tree from the genus Akka. Such a tree in height does not exceed 4 meters. Feijoa fruits are oval and green in color. They weigh 25-50 grams, and they look like small squash. Mature fruits should be soft to the touch.

The historical homeland of this plant is Brazil. But feijoa is also grown in the countries of Central Asia. And in our country – in the Krasnodar Territory.

For the first time, Europeans discovered feijoa in Brazil at the end of the 19th century. By the way, in honor of its discoverer, this fruit got its name. And the man who discovered the feijón was the director of the museum of natural history, João da Silva Feijo.

Feijoa, although a tropical plant, is capable of tolerating low temperatures. Even frost down to -14 degrees does not cause him damage. That is why this plant took root in Europe, where it was first introduced in 1890.

The cultivation of the exotic feijoa fruit at home is now quite popular.

Feijoa has beautiful large flowers that bloom for a long time, as well as leaves of a peculiar silver color. Therefore, feijoa bushes look beautiful and used to be used for decorative purposes. They decorated squares and parks. It must be said that so far with this purpose feijoa is used in some hot countries. 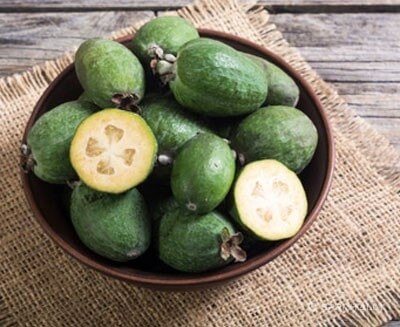 Even before the war, this fruit was introduced in the Caucasus, where he perfectly got accustomed. Therefore, on the shelves of our stores, this fruit usually appears from there. The time of active fruiting feijoa are November and December. Therefore, you can buy it in November.

How to eat feijoa

Of course, when you look at this unusual fruit for us, the first thing you think is, how is it? Now tell.

Feijoa fruit can be eaten fresh, and you can add them to various dishes. Feijoa is great for making any dessert or baking. Often these fruits are made from jam, jam or compote. Feijoa also fray with sugar for long-term storage. This mixture is very useful for improving immunity, an ideal tool for the prevention of colds. The flower petals are also edible in feijoa. They are fleshy and sweet. The immature feijoa fruits are hard and tasteless. Mature fruits have whitish flesh jelly-like consistency. It has a lot of small seeds.

Quite popular are canned food and feijoa fruit drinks. The confectionery industry uses them as fillings for sweets. Feijoa can perfectly serve as a decoration for any fruit salad. Sometimes this fruit is served with meat or even fish dishes (there are lovers of exotic cuisine).

Fresh feijoa are cut across and the flesh must be eaten with a spoon. The peel is separated from the pulp quite simply.

Fresh feijoa can be stored only a little more than a week. After this period, the fruits begin to wither and lose their taste. Therefore, feijoa fruits are often subjected to processing, which allows preserving this fruit for a longer time. 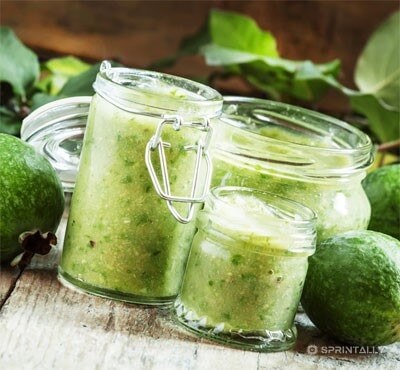 Feijoa can make a very useful juice. For the juice, you need to choose sweet and juicy fruits. For the preparation of freshly squeezed juice should not clean the fruit from the skin. It is traditionally pressed by the press. To obtain nectar, you need to add pure spring water or water from mineral springs to the fruit mass. Feijoa juice can be made at home using a juicer. You can add a small amount of sugar or honey to the juice. Mix feijoa juice well with banana juice.

The benefits of feijoa, as well as the rich medicinal properties of the fruit, are explained by its unique composition.

The feijoa pulp contains sucrose. Fruits have a fairly high acidity. The composition of the mature feijoa fruit includes vitamin C, and its amount increases as the fruit ripen. Feijoa berries contain a lot of pectic substances, fiber, they also have a certain amount of protein substances.

Feijoa has one very important feature. This exotic fruit is the only plant in the world that can compare to seafood by the amount of iodine contained in them. This fruit is able to accumulate water-soluble iodine compounds, which our body absorbs very easily. However, the content of this element depends on where the plant has grown. In addition, not all of its fruits contain the same amount of these compounds.

What else is included in feijoa? Feijoa fruits contain amino acids. They also have a fairly large number of phenolic compounds: catechins and leucoanthocyanins, soluble tannin, etc. These biologically active substances are strong antioxidants. They contribute to the prevention of cancer. It should be noted that these substances are mainly contained in the skin of the fetus. That is why it is so useful to eat it whole without cleaning it.

The rind of feijoa fruit is edible. However, it has a not too pleasant, tart, astringent taste. Therefore, the fruit is usually peeled, and dried and brewed with tea. Feijoa also contains fiber. 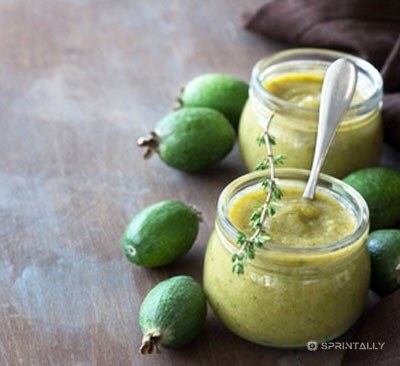 Feijoa exotic fruit has many healing properties for the body, which explains its health benefits.

First of all, as we said above, the feijoa fruit is valued for its high iodine content. Due to this, feijoa fruits are very useful and are recommended to be eaten by people suffering from thyroid diseases associated with iodine deficiency in the body. Experts also recommend eating them with diseases such as gastritis, atherosclerosis, hypo-and avitaminosis, pyelonephritis and inflammatory diseases of the gastrointestinal tract.

In dermatology, feijoa essential oil is used as an anti-inflammatory agent. Feijoa fruit extract has powerful antibacterial and antifungal properties. Feijoa fruits are low in calories and high in minerals and fiber. It has feijoa and high antioxidant properties.

The leaves and bark of these trees can be used as a disinfectant and antiseptics for healing wounds and ulcers. A decoction of feijoa leaves helps relieve toothache and get rid of bleeding gums.

Feijoa is also very useful for rheumatic pains. This fruit is used for the prevention and treatment of scurvy, malaria. It helps to get rid of acne, has a calming effect for painful menstruation. Feijoa helps lower high blood pressure and cholesterol levels. Feijoa is also useful and is often used in the treatment of bronchitis, helps with vomiting and diarrhea, including in children.

Feijoa bark extract protects the heart and improves its performance.

In folk medicine, feijoa fruits are used to treat atonic constipation. It is useful to have feijoa for gout, goiter’s disease. Feijoa and various diet dishes are prepared.