Top 10 most creepy and dangerous animals in Australia

Dangerous animals: Everyone knows Australia not only as a green continent and the birthplace of kangaroos. It is also a well-known fact that Australia is home to a huge number of all sorts of abominations in the form of spiders, snakes, jellyfish, and crocodiles.

Not only do all these animals of the fauna do not look the best, but they are also very dangerous for humans, most of these animals are poisonous. Have you prepared your eyes and nerves?

Here’s a top ten list of Australia’s most dangerous animals. 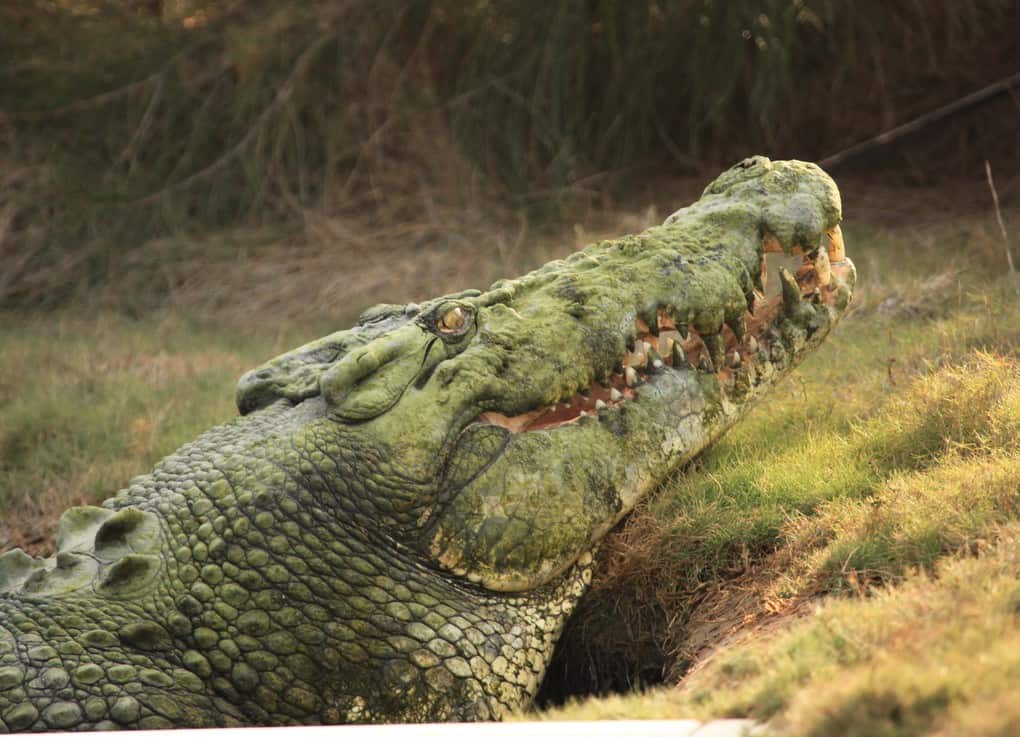 Well, for dessert, your attention is drawn to a real monster, a Triple Crest Crocodile. Although who else will be dessert, just look at the numbers. Triple Crest Crocodile reaches 7 meters in length and 2 tons in weight, deservedly claiming the laurels of the largest predator located in the coastal zone of Australia.

These monsters are not afraid of humans at all. Moreover, crocodiles are not averse to consider a tourist as a real dinner, and, unfortunately, sometimes realize their plan. The best way to avoid being trapped in a Triple Crest Crocodile mouth is to avoid its habitat. That is, if you see a sign prohibiting swimming because there are toothy predators here, believe me – you should definitely not take any risks. 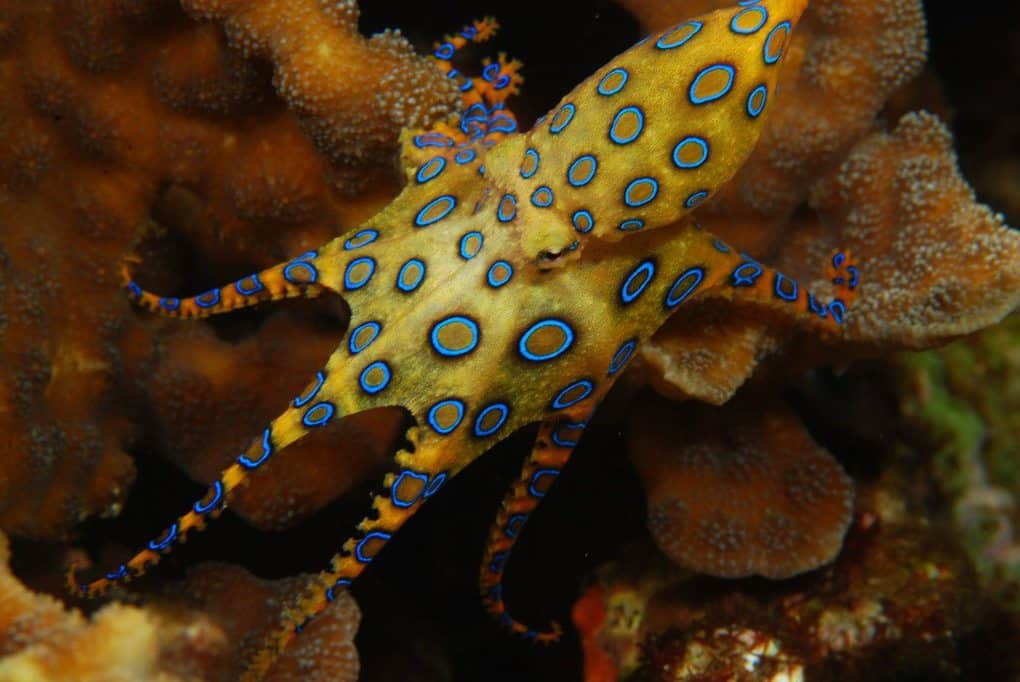 Unlike most of our current heroes, blue-ringed octopuses look attractive. Their yellow skin is decorated with bright rings of black and blue colors. In addition, the small size of the marine inhabitant (about 20-25 cm) also has an advantage. However, the blue-ringed octopus is not in our rating to be touched by it. “Onboard” this beautiful animal has a supply of a nerve agent that can kill a couple of dozen people in terms of toxicity.

The poison contains a bunch of elements, the most active of which is tetrodotoxin. The most surprising thing is that the antidote does not exist to this day, so medical assistance to the bitten person must be provided as quickly as possible. 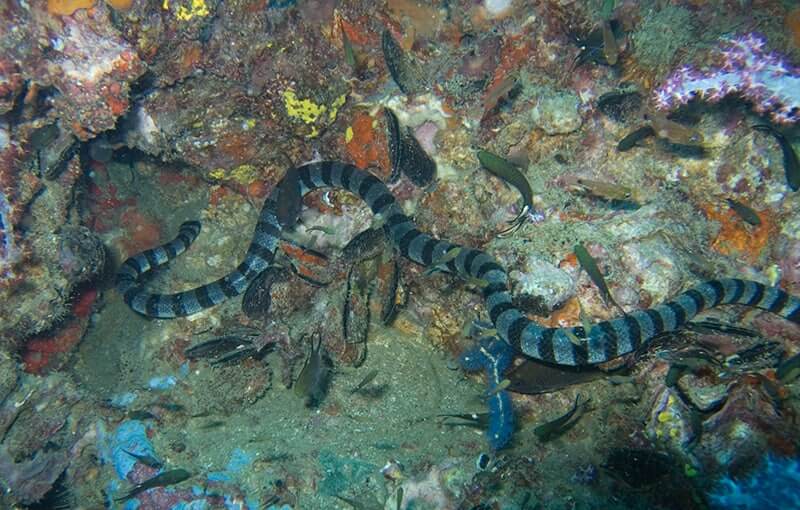 Well, let’s say that you have saved yourself from warts and decided to go on an underwater trip with scuba gear. You will be surprised, but again you will have to be on your guard. There are sea snakes off the coast of Australia. What the hell kind of place is this? However, the fact remains that the Dubois’ sea snake does not just exist underwater, it is also a carrier of highly toxic venom. However, you should not panic too much either.

Even though Dubois is recognized as the most dangerous sea snake, it does not attack humans. On its own initiative, the snake may approach the diver out of curiosity (at this point, you just need to stay calm), but not for the sake of a purposeful bite. Dubois only uses its striking stingers as a defense. 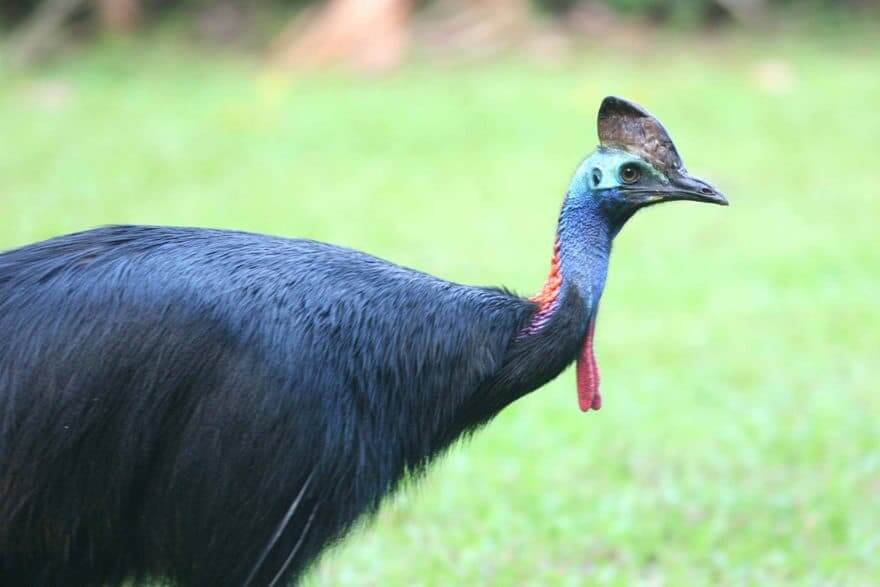 Another animal of the green continent, which does not want the appearance of a person in its life. We are talking about cassowary’s huge flightless birds. For clarity, just indicate the size and weight of the average cassowary: about 160 cm in height and about 60 kg (the parameters are very similar to humans). This, perhaps, is where the paths of large birds and people diverge. Cassowaries lead a very secretive lifestyle, they live in the depths of forests and feel the approach of humans for a long time.

As a rule, the bird prefers to hide and does not show aggression to people. However, if you provoke a cassowary, you can grab it well, the animal hits from both legs at once. It’s not just the force of the blow, but also the huge claws that pierce the skin with amazing ease. A cassowary attack can be fatal to humans. 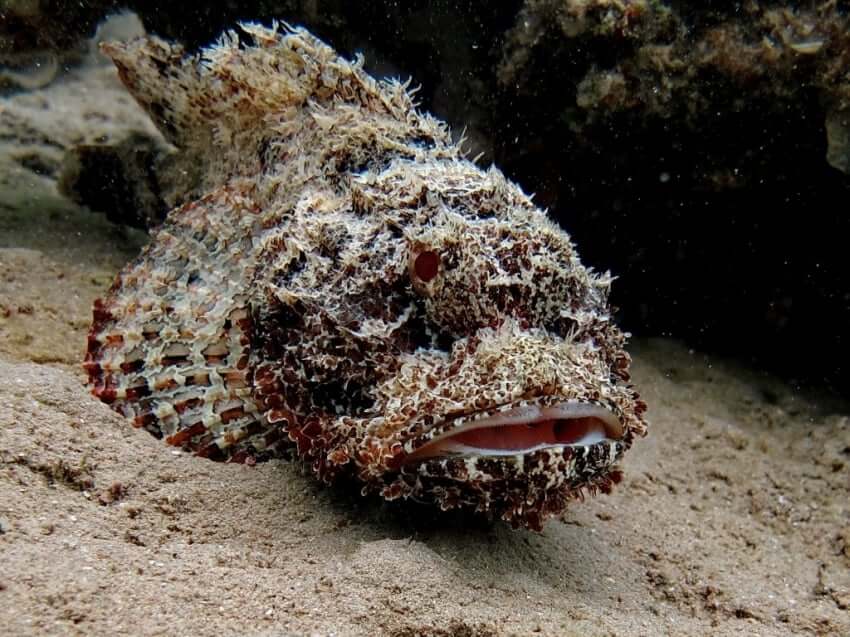 So, everything is clear with the Australian land, but what about the coastal waters? Alas, here you also need to be extremely careful, because very close to the ground lives a Reef Stonefish. The toxic substance is stored in the dorsal spines, which the fish fluffs up at the slightest discomfort. A thorn wound that is not treated in the right time frame can cause death (the poison is so toxic that it only takes a couple of hours to kill a person).

Reef Stonefish masterfully disguise themselves by burrowing into the sand or hiding between rocks, it is almost impossible to notice the fish in advance. In addition, these creatures can also be on land, and in good health (the Reef Stonefish can live out of water for up to 20 hours). 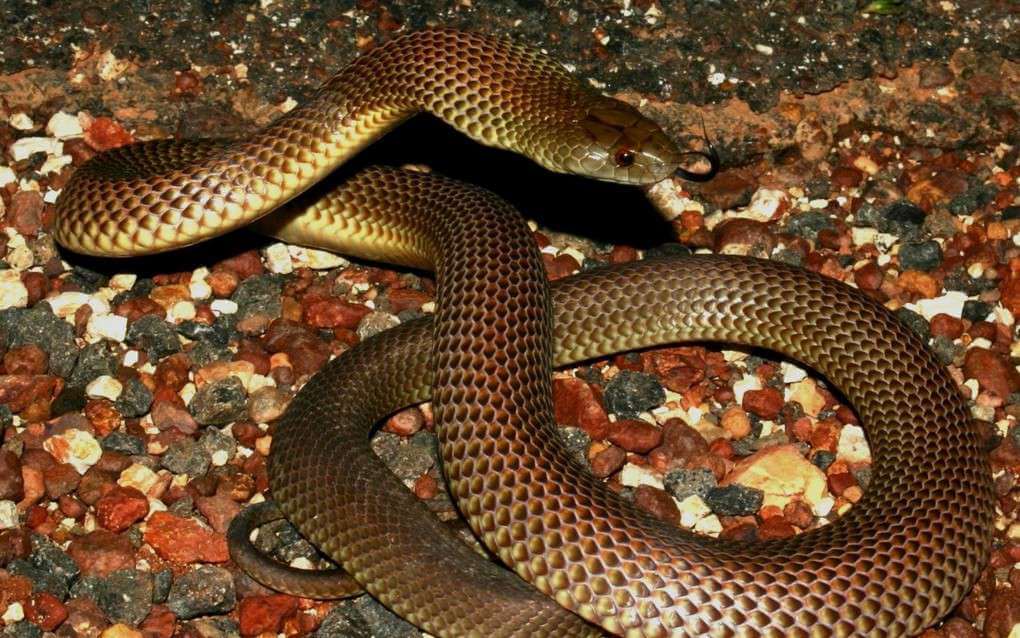 The stronger the weapon, the less often the owner wants to use it. The venom of the eastern brown snake is not too toxic to the poison of Taipan McCoy, but the creature is quite “generous” with it. First, this type of snake does not tend to attack (the bite is applied only when threatened).

Secondly, the eastern brown snake does not want to kill the opponent at any cost, on the contrary, striking bites are very rare. However, snakes still have to defend themselves. Since they live near farms or other places where domestic animals congregate, contact with humans is inevitable. 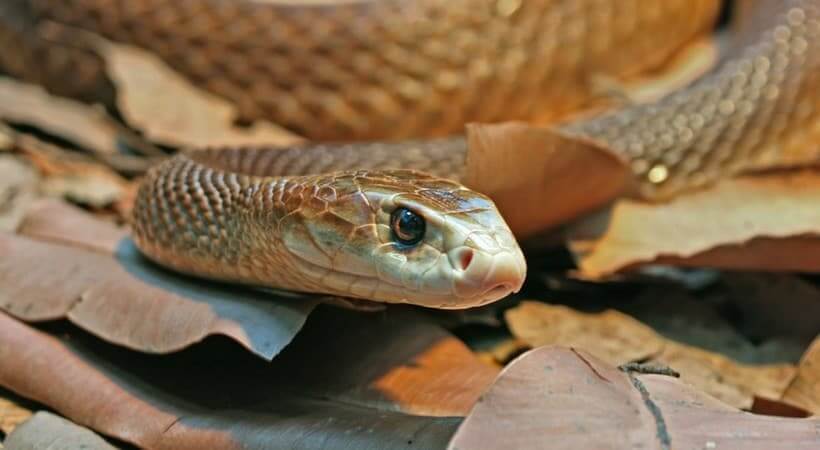 This snake is rightfully recognized as the most venomous of those that live on land. Each snake of the Inland taipan contains about 40 mg of the deadly liquid enough to poison hundreds of people! The uniqueness of these snakes is also that they change color depending on the time of year. That is, the lower the air temperature becomes, the darker the skin tone of the creature.

The inland taipan is quite difficult to detect: snakes not only merge with the environment but also hide in all sorts of crevices. Despite the formidable weapons of the Inland taipan, there is no documented case of a snake-initiated attack on a person only with careless handling. 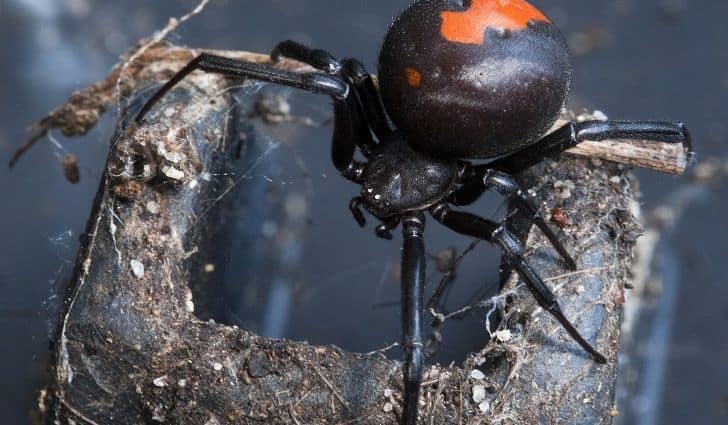 Some more abominations from the green continent. Do you know where the name “widow” came from when applied to spiders? It turns out that during sexual intercourse, the female simply eats her fertilizer. Beeeee, what a nightmare… Well, that’s it. The Australian black widow spider is considered the most dangerous spider in its homeland.

Despite their extremely small size (the length of females is 10 mm, males-4 mm), these creatures are literally stuffed with neurotoxic poison. Again, due to its size, it is difficult for a person to notice a spider, which makes it easy to be bitten. The toxic substance instantly causes severe pain. There is an antidote for the Australian black widow, but the pain takes a very long time. 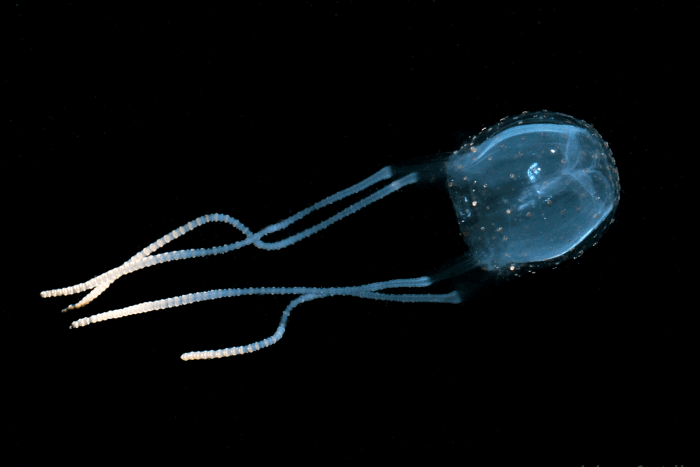 Another creature that I don’t think any of you would want to deal with. Irukandji jellyfish are distinguished not only by the presence of the strongest poison “on board”, but also by their cunning when using it. The fact is that when a jellyfish comes into contact with a person, it throws out a poisonous substance only with the tip of its tentacles, such a bite may seem insignificant to a bather.

In fact, the injected toxic liquid is quite enough for numbness of body parts, pulmonary edema, muscle pain, and tachycardia. The list of consequences of contact with Irukandji jellyfish can go on for a long time – death, by the way, is also included in it. These jellyfish are really very dangerous, so in Australian waters, you should be as vigilant as possible. 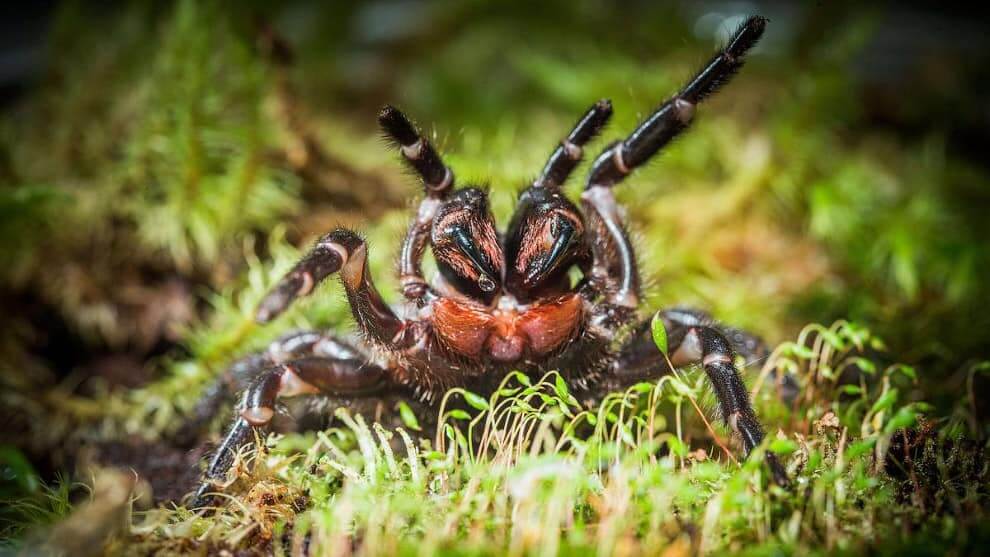 Few people get aesthetic pleasure from the sight of spiders. Moreover, there is a whole phobia dedicated to the human fear of these creatures. And if small spiders, which we can occasionally observe in our homes, in fact, do not pose any danger, then the Sydney funnel-web spider should be seriously feared.

In addition to the frankly disgusting appearance, this insect has a supply of poison hidden in special stings. A Sydney spider bite can lead to numbness of the limb, shortness of breath and if you do not seek help in time, even it can cause your death. The problem is that spiders easily enter homes and hide in clothes or things lying on the floor.