Can i find my love on fast dates?

Fast dates: Once again, having jumped into a hammered minibus in the morning, I hung on the road for 20 minutes (not of my own will, of course) over the girl, in turn, selflessly buried in a smartphone. The beauty and at the same time the lack of modern phones with huge screens is that they perfectly show the pictures not only to their owner but to everyone around him.

Contents of the Article show
Can anyone find my love on fast dates?
Ambulance for lonely hearts
Love ticket
A dozen dates in two hours. Personal experiment

Can anyone find my love on fast dates?

A girl of twenty leafing through the profiles of guys from a dating site. Immediately behind her sat a young man, on the screen of the phone (do not believe it!) – the girls’ profiles of the same site. I wanted to say: “Hey, just look around!”. I – a girl restrained, so silent. But though for a long time …

The increasing pace of life every day makes its own adjustments in the relationship between the sexes. Today we are much more picky and pragmatic than our parents. By choosing the second half, most adults try to approach rejecting all sorts of illusions.

Perhaps someone will condemn such straightforwardness. But there will be those who, in a similar trend, will see a silent attempt by society to ensure themselves against repeated mistakes in choosing a life partner, and perhaps even to save the institution of a family bursting at the seams.

However, awareness and planning when searching for the second half do not deprive this process of romance – at least, the organizers of “quick dates” assert.

Speed Dating – a way to meet men and women, popular in the West. Such dates can be seen in many Hollywood romantic comedies. During the evening, each participant can get acquainted with 10-30 participants of the opposite sex.

Men and women sit down at tables in a cafe and chat on free topics when they change the table from table to table every few minutes. During communication, each notes the number of the interlocutor, indicated on his badge, in his “sympathy card”. In case of mutual coincidence, the organizers will send the contacts to both parties.

The history of Speed Dating is 18 years old. The format of quick dates in 1998 was invented by Rabbi Jacob Devo from Los Angeles. The first party of Speed Dating took place in Beverly Hills in late 1998. Very quickly, such a format of meetings spread around the world, becoming an almost revolutionary way of dating for successful people who do not have enough free time to search for the second half.

For example, in London, where a huge number of businesspeople live, Speed Dating parties gained such incredible popularity that it was almost impossible to get into a quick date area without prior registration. In the US, mini-party parties have become a fashionable trend; they are visited by famous personalities, shown in movies and TV shows (“Sex and the City”, “The Simpsons”, etc.). 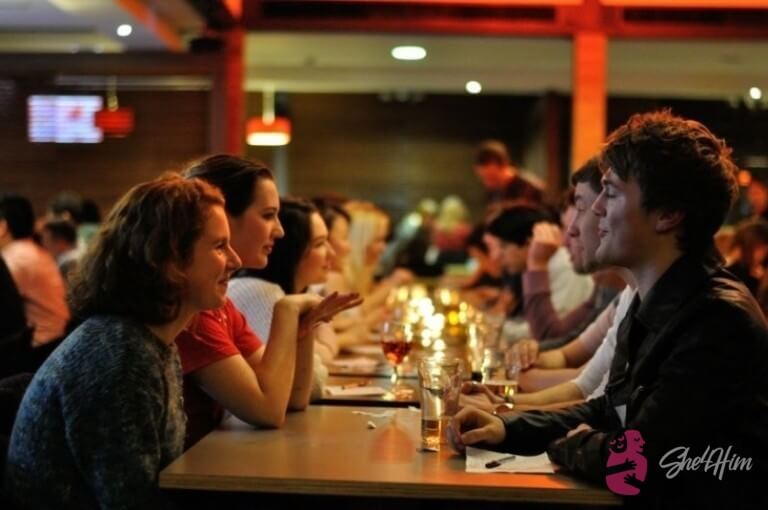 In my hometown, people began to go on fast dates fairly quickly and actively. Lonely hearts were always enough, so the people “swung” quickly. The organizer’s motto is loud: “We give love.” This very love is, by today’s standards, inexpensive: 100 hryvnia per person.

This includes an average of a dozen dates in two hours in a cozy cafe setting and tea/coffee / a glass of wine, so as to be less embarrassed in an unusual setting. In the capital, the price reaches 500 hryvnias, but the organizers promise a whole buffet table – basically, the concept of a paid love search does not change.

“In my opinion, fast dates in the conditions of today’s busy work and city life are the most suitable format for dating people in the modern metropolis,” says one of Speed Dating organizers Timur Amelchakov. Timur says that connecting hearts is his hobby: “I had already introduced all my friends and girlfriends to each other, I was like a matchmaker. Then, when I had a wife, Yana, we decided to implement the idea from the movie. ” According to the guy, each time a meeting results in a minimum of 2-3 pairs. True, the marriage for the 3 years of the event on his memory has not yet been.

“Today, people learn to value your time, knowing that mostly it is spent on career and vocation, that is why Speed Dating is so popular among the successful, busy and value their time people – says Timur. At the same time, a large part of communication in the modern resident of a big city takes place on Internet forums and in social networks.

Such communication rarely allows getting a source of objective and reliable opinion, because on the Internet it is much easier to seem better than we are, and show only your best side. Therefore the main priority of quick visits, I think the possibility of real communication, which allows to immediately determine who is nice to you, and to continue the dialogue on a real date”. 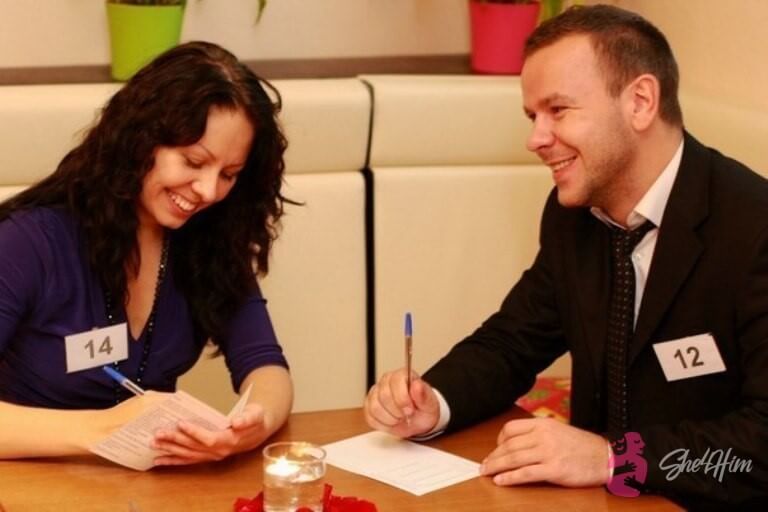 Is it realistic to find the prince of my dream in 5 minutes I decided to check for myself? I was guided rather by professional curiosity, which does not allow any author or journalist to sleep peacefully. As a skeptical girl, it seemed to me that either citizen with a specific sense of humor, or completely disappointed desperate people who have big problems in everyday communication with the opposite sex, want to participate in such an action. My fears came true only in part – everything turned out to be more lively and more optimistic than I imagined.

For reasons of clarity, the ring finger had to be removed (Yes, blush, but really I am married) and imagine that I’m looking for my soulmate. In the cozy cafe – nice music, tables for two, candles. We were each given a badge with the number and form in which it was necessary to put a “rating” of the interlocutor. Options are only three: sympathy, friendship, business (although some might be the business if all came my love to the grave to look for?).

The first companion, I got to talking about literature and discovered a common love for the work of Remarque. The next guy I enthusiastically prophesied that despite their own creative and intellectual profession, I do not care who will be my soul mate, a lawyer, a mechanic or a musician (for the sake of justice I will note that I did not crooked – my husband really has nothing to do with creativity and is doing some routine work with electronics at a private medical center).

Third, the software engineer for industrial equipment, which seemed to be very nice, I blinked her eyelashes and blushing in embarrassment, told me that I am an absolute computer “kettle” and even reinstall Windows alone can not. In General, for the purity of the experiment, I did not spread that came to the cafe from the author’s curiosity.

After the fifth companion, I start to get confused in the names and occupations of potential suitors (most of them were staunch techies) and their own “testimony”. And time for a break is not provided with melting brains and thickly I continued the search for the Prince on a white horse. 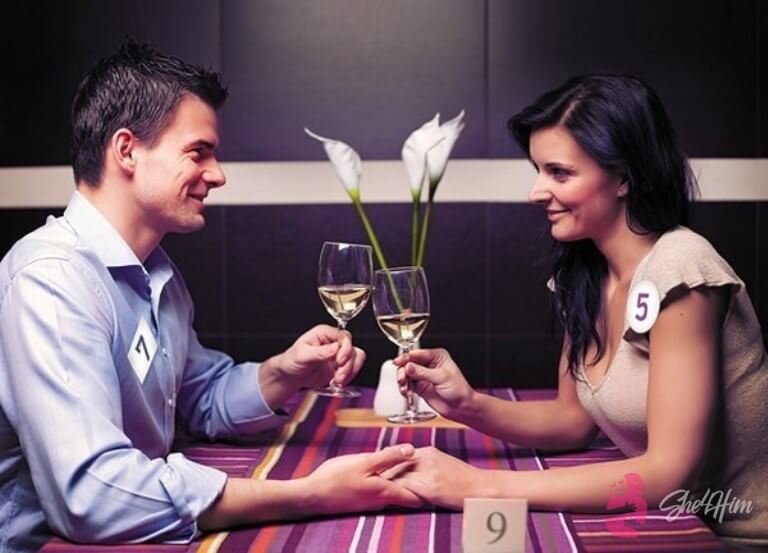 When the 40-year-old biker-psychiatrist found himself at my table, I was at least a little alive and took heart. Agree, not every day you communicate with such a colorful personality. Starting with the washing of the bones of Grandpa Freud, we smoothly switched to the specifics of his and my work and finished with the biker theme.

But with the last interlocutor, an assistant attorney, I had an epic fail. As soon as I saw him, I blurted out that he was a bit like an animated character coming alive. And when he heard that he hates anime, honestly blurted out: “I, too.” Then she carefully asked if he had Oriental roots. And she received in response a description of the richest family history, about which one can write a whole historical volume. Or at least a little thing … At that moment I realized that I couldn’t even throw a professional cockroach out of my head, and hurried to bow.

In any case, for the informative evening to the organizers, I say thank you. With some people, we continued to communicate on social networks. Not love, interesting conversations – it is a good result? 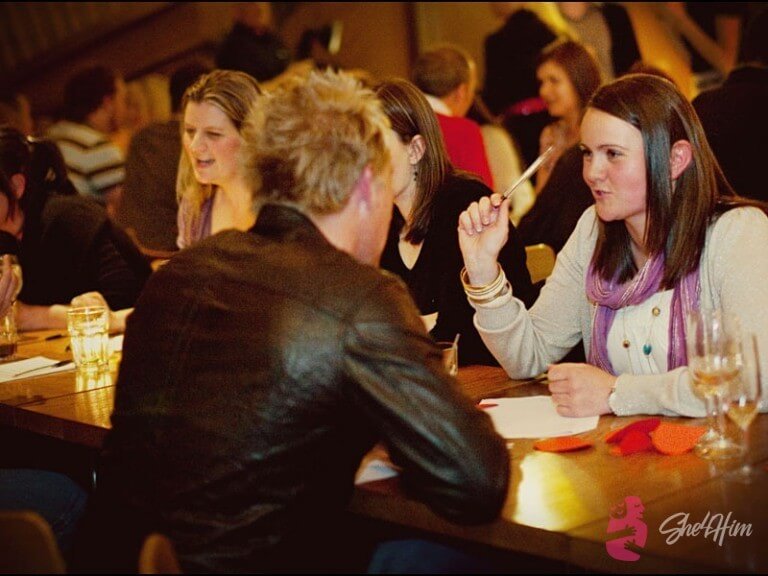 omg
300
omg
We write about the best dating and relationship tips.