At the Google I / O 2018 conference, Google introduced a public beta version of the new mobile operating system Android P. For the first time its announcement took place in early March, but then the main focus was on the opportunities for developers. With the release of the public beta, the company showed several innovations for users.

Contents of the Article show
1. New interface navigation
2. New menu and multi-tasking screen
3. New notification bar
4. Control panel and Digital Wellbeing
5. New Do Not Disturb
6. Change the volume control
7. Integration of applications into the search and quick launch of their functions
8. New utility for taking screenshots
9. Optimizing battery consumption
10. New Material Design
Android P is Popcorn, Peanut Butter, Panna Cotta or Praline?
And where about the cutout of the screen?
Where to download and what smartphones can I put?

In Android P, only two buttons will be used to navigate the interface, not three as of now. Developers will leave the “Back” key, but it will appear only in applications.

All the rest of the time on the screen will be displayed only one button, the work of which is combined with gestures. When you click on it you can still get to the desktop, to open the multitasking window you will need to pull the button from the bottom to the top of the screen, and if you continue to do this, the menu with applications will open. Another way to access the latest programs is to pull the new multitasking button to the right or to the left.

The new application menu in Google is called the App Drawer, in which applications are always displayed in alphabetical order and can be sorted according to the usage profile (at home and at work). 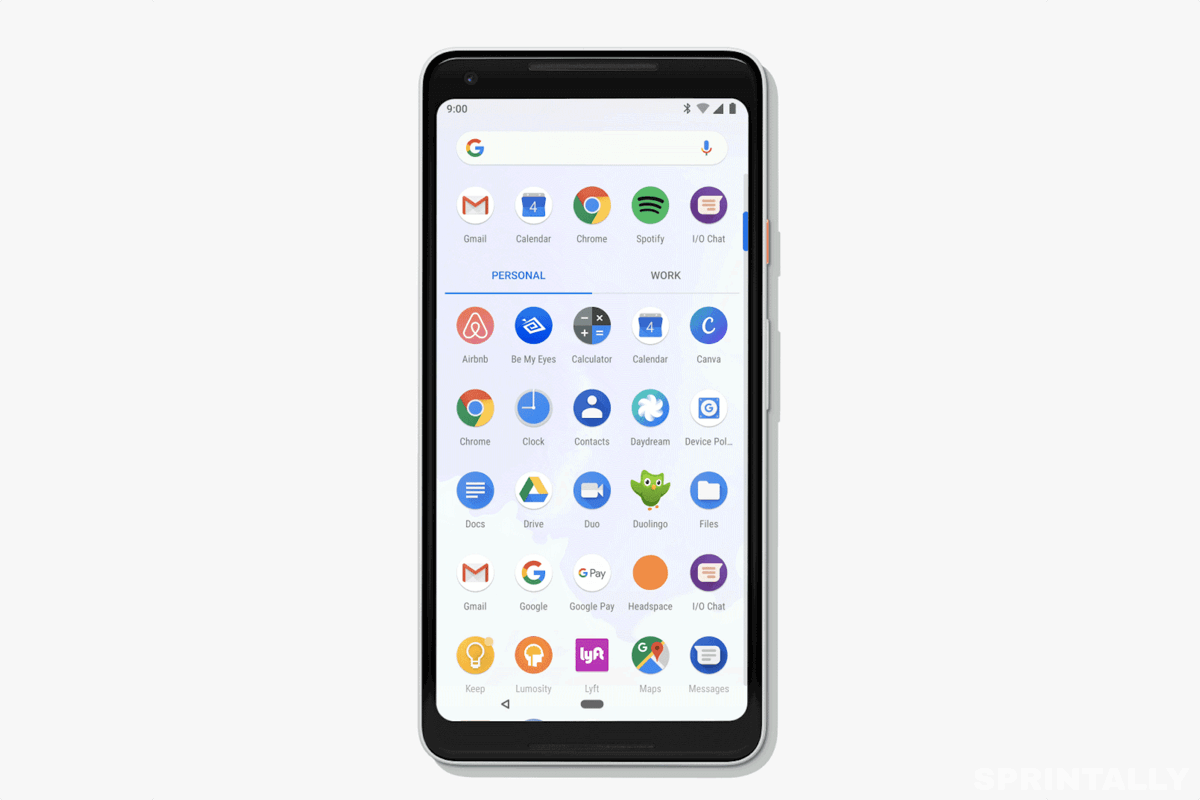 And the new multitasking screen was called Overview, and it now includes a search string and a list of applications offered by the system. 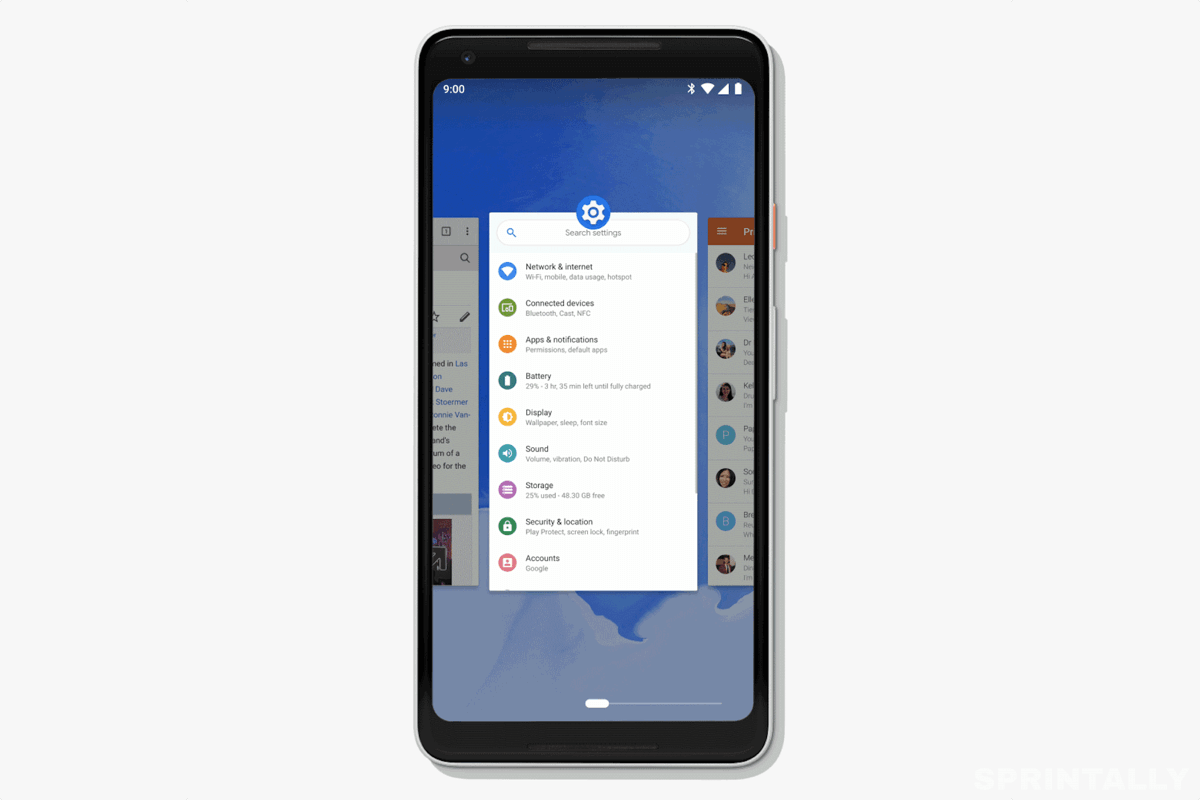 The latter function uses machine learning to try, based on user behavior data, to predict which programs it wants to open next. It is also interesting that on the multitasking screen, application windows are not simply displayed in miniature, they remain interactive, that is, the user can work with their interface or select and copy text.

Together with the update of navigation and menus, the new interface will receive a notification panel, its panels will have rounded corners and round buttons of quick settings. The latter will not show additional options or information any longer but will flip the user to the main settings menu. 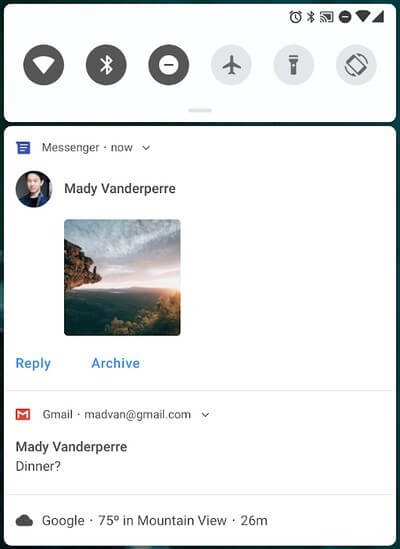 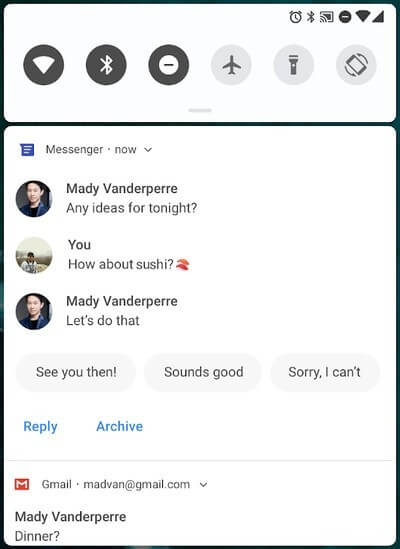 Google also plans to add machine learning when working with alerts. The system will monitor what notifications the user ignores and does not open, and after a while will prompt simply to turn them off.

In Android P, Google added a control panel that collects and displays data on how long the user worked with his smartphone a day, how much time he spent on each application, and how many notifications he received. The company believes that this will help people better understand exactly how they use their smartphones and possibly change habits. In the company this concept is called “Digital well-being”.

But the possibilities of the new control panel do not end there, the parental control function is built in, only for the adults themselves. This means that the user can limit himself the time to use certain programs or games. For example, you can highlight an hour per day on YouTube and 30 minutes on Facebook. When the usage time comes to an end, the user will be notified of this. After that, the application is locked and its icon becomes gray. If you then click on it, you will receive a message stating that the usage time has expired. At the same time, you can not disable the blocking through this notification, you need to enter the control panel.

In addition to strict control over the time spent in applications, the control panel also offers a softer option, called Wind down (a phrase that in English is sometimes meant: gradually reduce the work to a complete stop). After activating it you need to specify when you want to go to bed when this time comes, the system will turn off the notifications, and the Android P interface and all applications will become completely black and white. All functions will remain working, but the color will remind you that you should already sleep.

5. New Do Not Disturb

In Android P will be implemented the more aggressive operation of the “Do Not Disturb” mode. When you turn it on, the smartphone will completely stop displaying alerts, they will not be in the corresponding panel, on the lock screen, or on the always active display. And if you need to receive notifications from certain contacts, you should first note them as important in contacts.

Some Android smartphone manufacturers are already using volume keys just to adjust the sound during media playback. In the stock still Android, these buttons try to be multitasking: change the volume of music, video or sound in games, and in the interface the volume of alerts. In Android P, the volume keys are always tied to the media, the sound of notifications is now only adjusted in the settings. In this case, while using the volume buttons, a key appears on the screen that allows you to put the smartphone into silent mode.

7. Integration of applications into the search and quick launch of their functions

In Android P, Google will allow developers to better integrate their programs with the operating system interface and search. These options in Google are called Actions and Slices.

Actions help users to quickly launch certain application functions directly from the Android P menu. Thus, you do not need to open the program itself.

Slices do the same, but only in the search. For example, instead of opening Google Maps and entering an address, you can simply enter it into the search and the system promptly prompts you to route it to it.

When you create screenshots in Android P, you will finally be able to draw on them. This option is almost all third-party manufacturers of Android-smartphones, but in the clean interface of the Google operating system, it was not. In addition, there will be another way to take screenshots if the traditional combo “volume down + power key” does not work. It will be necessary to pinch the power button and in the appeared menu select the icon for creating the screenshot.

The Android development team has entered into a partnership agreement with DeepMind (which belongs to Alphabet) in order to improve the autonomy of smartphones with Android P using machine learning. This development in Google was called Adaptive Battery, it allows the system to prioritize applications, how often the user opens them. If the program is used rarely, it will close after a while and stop consuming the resources of the smartphone in the background. At the same time, applications that are used more frequently will have priority over background work. Google claims that such a system can increase the autonomy of smartphones by 30%.

In addition, machine learning in Android P will be used to learn how the user changes the brightness of the screen, depending on their environment. This will allow the system to adjust the brightness to a specific user.

Introducing the concept of Material Design in 2014, Google gave developers a general idea of how the design for their platform should look. But the problem was that this concept did not cover all the requests of developers, as a result, not all understood it and adhered to it. However, this year, Google updated Material Design with the new Material Theming concept. Now developers are offered more design options, and the concept itself is designed for web design, as well as mobile platforms Android and iOS.

In Android P and new applications, the company plans to use Material Theming.

Also, Google launched a new material.io site, dedicated to the update of Material Design, where you can find out about all the changes.

While Android P is just a code name. Google reveals the full name of the new version of Android along with the release of its final version. The company traditionally does this closer to the fall, and always calls its operating system in honor of sweets. So it may very well be that Praline.

And where about the cutout of the screen?

Representing the public beta version of Android P in Google did not mention the support of the cutout at the top of the screen, which is becoming more popular among manufacturers. It is likely that, as a number of other changes, this innovation will be shown later, with the release of the following beta versions of Android P.

Where to download and what smartphones can I put?

The beta version of Android P is available for download on Pixel / Pixel XL and Pixel 2 / Pixel 2 XL smartphones. But this time in Google has decided to connect to testing users of devices from other manufacturers. Therefore, for the first time, a beta version of the new Android can be delivered including the following models: Sony Xperia XZ2, Xiaomi Mi Mix 2S, Nokia 7 Plus, Essential Phone, Oppo R15 Pro, Vivo X21, and still not officially unveiled OnePlus 6.

You can download the first public assembly of Android P on the site of the beta testing program Android. But before installing, you need to remember that this is not the final release, and it can have critical bugs. In addition, before you put a beta version of Android P, you should make a backup copy of data on your smartphone.