10 reasons for your cat’s hiss

Cat’s hiss: One of the most common pets is the cat. People love it for the special feeling of comfort that the animal creates in the house. In an apartment where there is no cat, the atmosphere is completely different. Of course, you can ignore the magical astral power of the animal, although this is very important.

Contents of the Article show
Below are 10 reasons of the most common cause of cat hissing.
1. A warning to the owner
2. Cat is in pain
3. Cat defends the territory
4. Unmet feline needs
5. Cat does not trust its owner
6. Preparing for an attack
7. Bad mood
8. Hissing is a variant of intraspecific communication
9. Animal experiences fear
10. Hissing is inherent in this breed

After all, every cat shares its positive energy with its owners and takes away negative energy, but that’s not all. Cats protect homes from rodents. They are soothing, uplifting, and some even treat.

This does not mean that the cat is a weak willed animal that obeys people. Do not forget that this is a predator, even if very small. If the animal is dissatisfied with something, it begins to hiss. At such times, it is better to stay away from the cat.

The animal shows its teeth, assumes an intimidating pose, hisses, and can lash out and cause serious injuries.

If your cat often expresses its dissatisfaction, you will have to look for the reason for this behavior. Our article will help you with this.

Below are 10 reasons of the most common cause of cat hissing.

1. A warning to the owner 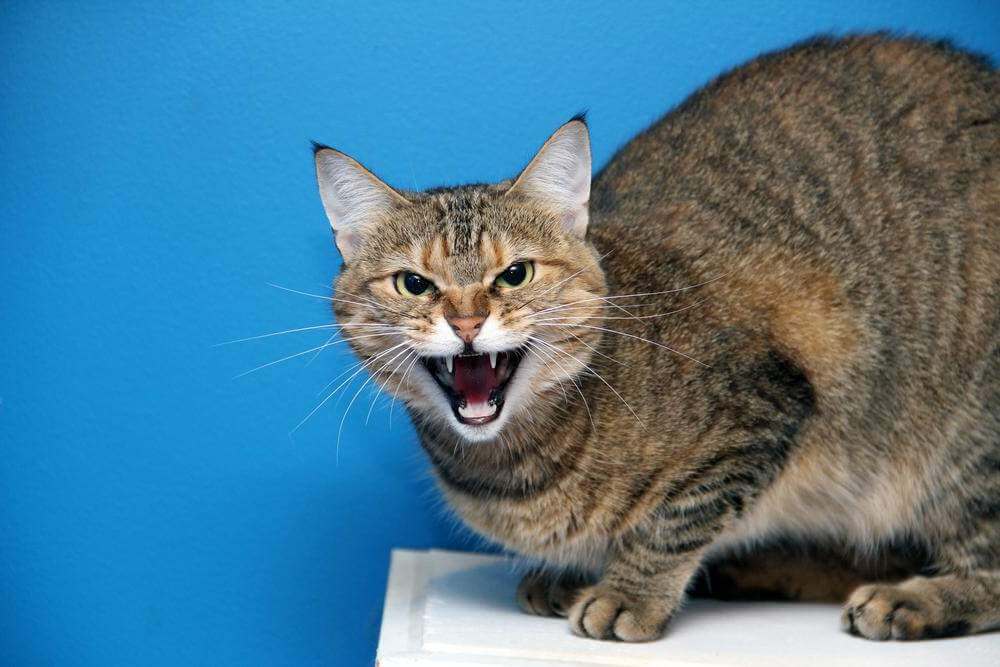 If the animal hisses, it can thus try to warn the owner about some problems. Any small thing can cause stress for the animal.

Do not take hissing as a threat, do not try to raise the animal. First, check whether the cat is doing well in health, whether its needs are met. Even if you don’t believe in the supernatural, don’t rule out the possibility that the cat sees something you don’t. It may be that cat is driving away dark energies with its hiss, but do not disturb the cat. 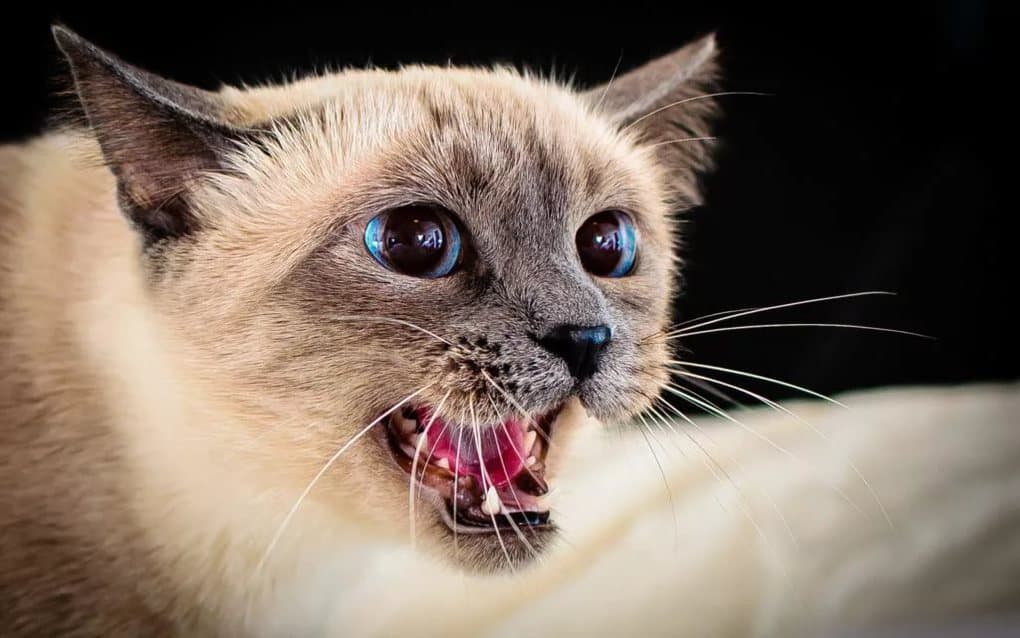 When it seems that the cat hisses for no reason, you need to check its health. The pet can’t say that it feels bad, but it is afraid of pain and expresses its feelings by hissing. Also, cats, trying to calm their pain, begin to purr.

If the cat does not feel well, the owner tries to stroke it, caress it, it will respond with a hiss. No need to be angry at the cat, watch its behavior. If you notice that the animal behaves strangely, do not waste time, go to the veterinary clinic. 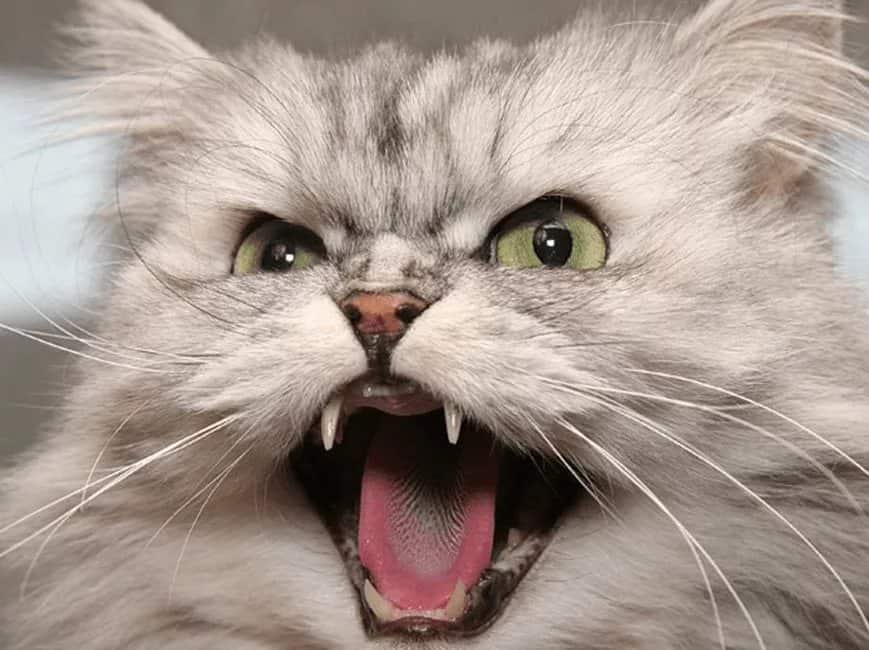 The cat hisses to show that it is the owner here. This happens when a strange person or other animal appears on its territory, it doesn’t matter. Usually, problems arise when a new animal appears.

The cat, which felt like the only pet and mistress in the house, does not know how to react, it begins to defend itself. When a child appears in the family, it is also impossible to avoid problems and long-term adaptation of the animal.

Don’t be alarmed. Most likely, the animal’s aggression will not be directed at the baby, but at the one whom the cat considers its owner.

You need to survive this period, try to pay as much attention to the animal as possible. Soon the cat will get used to the new family member and maybe even make friends with him /her. 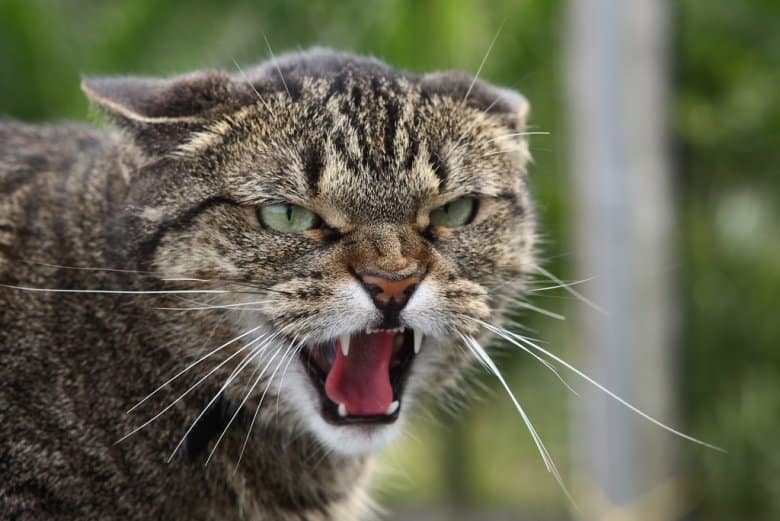 If the owner systematically fails to meet the animal’s needs, this behavior is also possible. If owner doesn’t put food in it, fill it with water, or clean the tray, the cat will start meowing. She says, ” Master, have you forgotten about me? I need you to feed me.”

If the owner continues to ignore the cat’s needs, it will soon start hissing, ” Why are you ignoring me? I want you to fulfill my requirements.” However, not all animals behave this way, but those whose owners paid little attention to their upbringing.

5. Cat does not trust its owner 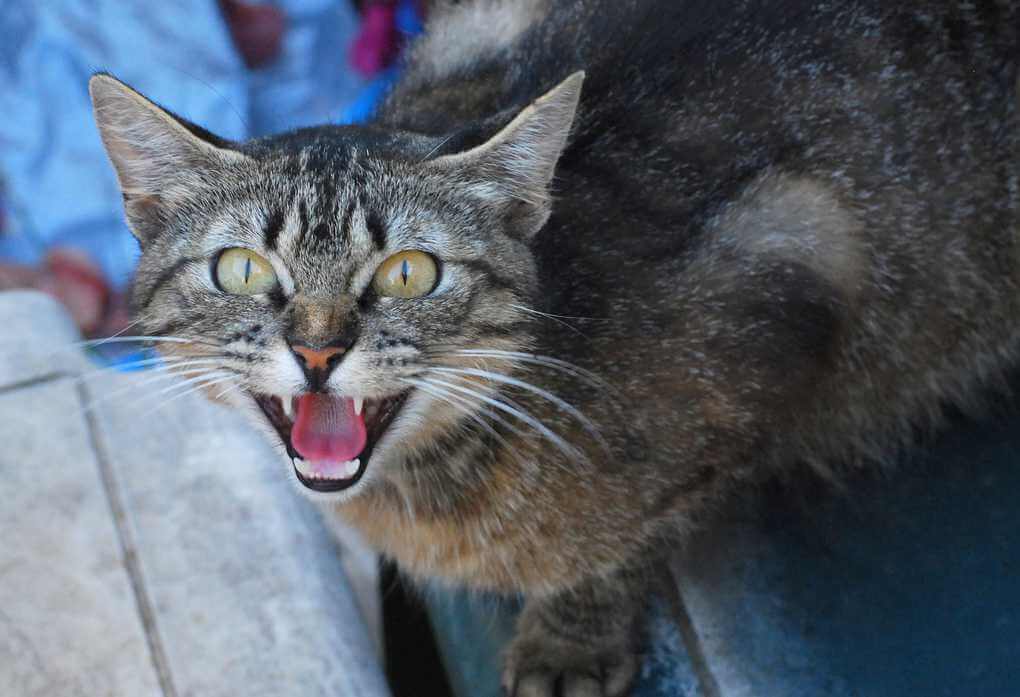 The owner does not always treat the animal well. Some people can afford to kick or push an animal when it “gets in the way”. It is clear that with this attitude, the animal will soon cease to trust the owner.

Problems can occur when a person takes an adult cat. It is not known how she lived before. It is likely that people hurt her, beat her.

It is also difficult for a cat to trust a person if it has not previously had contact with people. For example, a cat that was born in a basement and grew up without any human intervention will have to be socialized. This is not easy, and you need to prepare for aggressive behavior.

6. Preparing for an attack 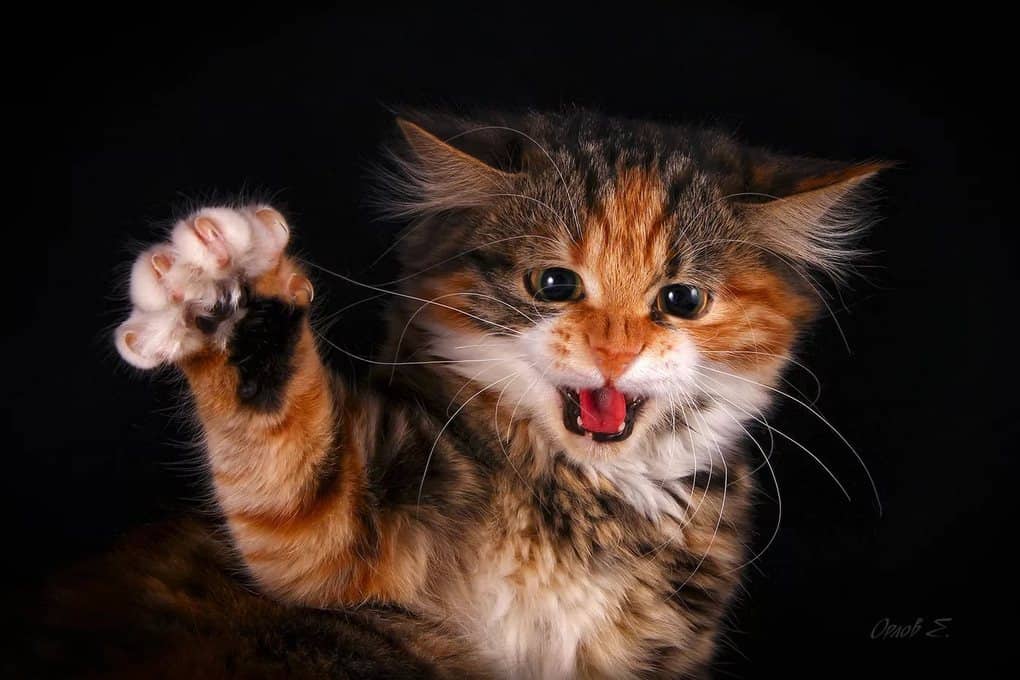 By hissing, the cat indicates that it is ready to attack. If the owner or his guests ignore the cat’s body signals, it may attack. This is such a warning sign before an attack.

Do not think that cat scratches are nothing. Sometimes a pet can cause serious damage to your health.

By the way, it may happen that the cat simply redirects its aggression to you. For example, she will see a cat on the next balcony, but she can’t get it. Therefore, she will have to take out her anger on the person or animal that is always there. 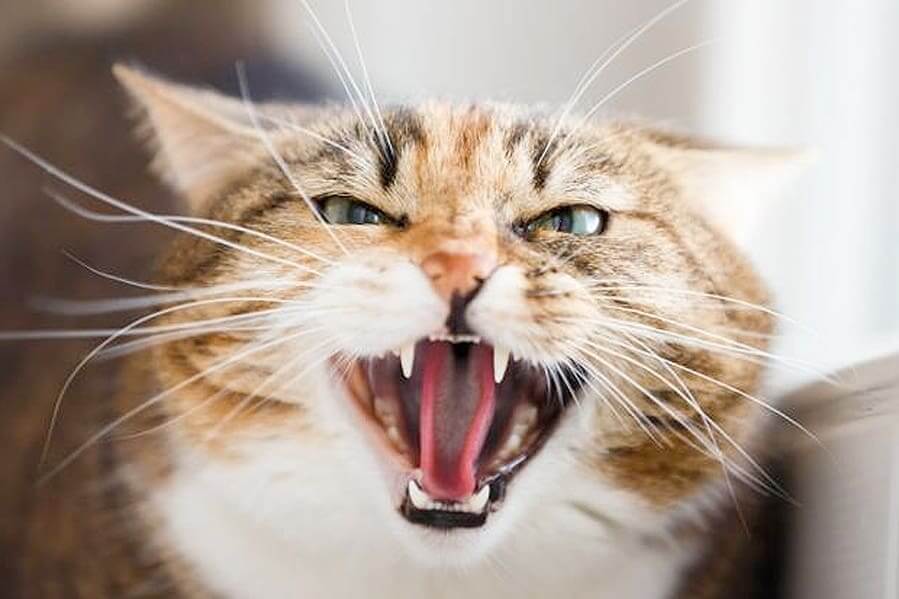 A cat can also be in a bad mood. If she is not in the mood to communicate, is in a bad mood, then it is better not to disturb her. Otherwise, the mood of its owner will deteriorate.

Maybe right now she doesn’t want to be petted, touched, and the owner is trying to show care and love. It is logical that the animal will respond with a hiss, or maybe something more convincing, for example, with a wave of its paw.

By the way, it is quite easy to understand that a cat is in a bad mood. It is enough to pay attention to the expression of her muzzle, the position of her body and ears. If the cat is angry, it is better not to approach it.

8. Hissing is a variant of intraspecific communication 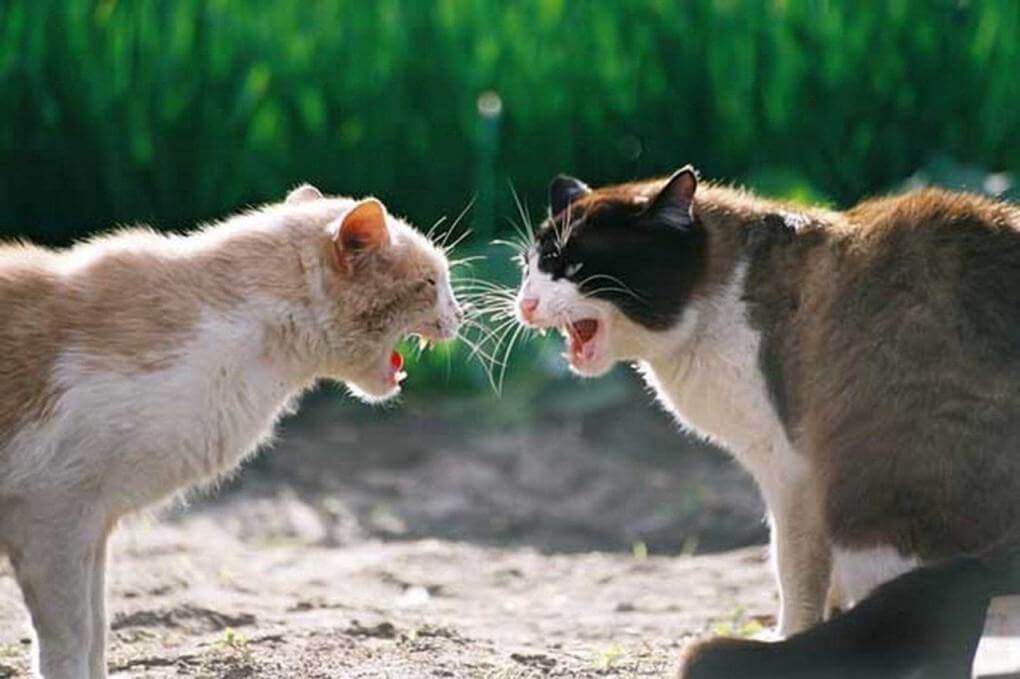 Therefore, the hiss of two cats at a meeting is not always a manifestation of aggression. In some cases, this is the establishment of a hierarchy.

For example, when a kitten pesters an adult cat with games, the cat may hiss at it. This is a kind of lesson for the kitten that it is impossible to disturb the elders.

Accordingly, if the cat is the only animal in the apartment, one day it may try to use hissing when communicating with a person. 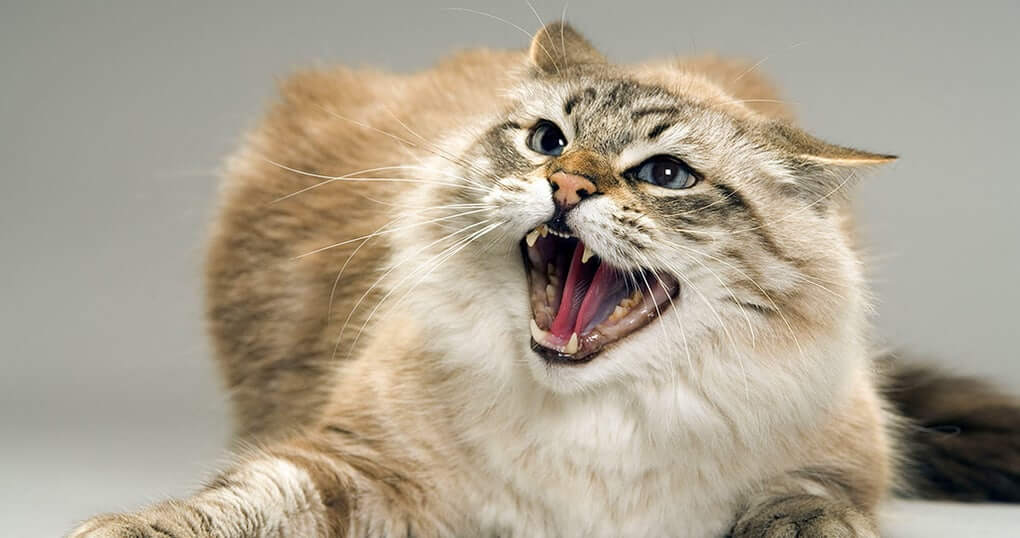 It’s easy to scare a cat. The reason may be a trip to the vet, visiting guests, or a loud sound. Sometimes, it seems that there are no visible reasons, and the animal has nothing to fear, but the cat often sees things that are inaccessible to humans.

She may be afraid of a person who has once harmed her. Maybe he /she stepped on your cat’s tail or tried to pick her up against her will.

In order for the animal to stop being afraid of something, you need to replace the associations, the cat should feel positive emotions. For example, when your friend who has long offended your cat comes to visit, treat her to a delicious meal, stroke her.

10. Hissing is inherent in this breed 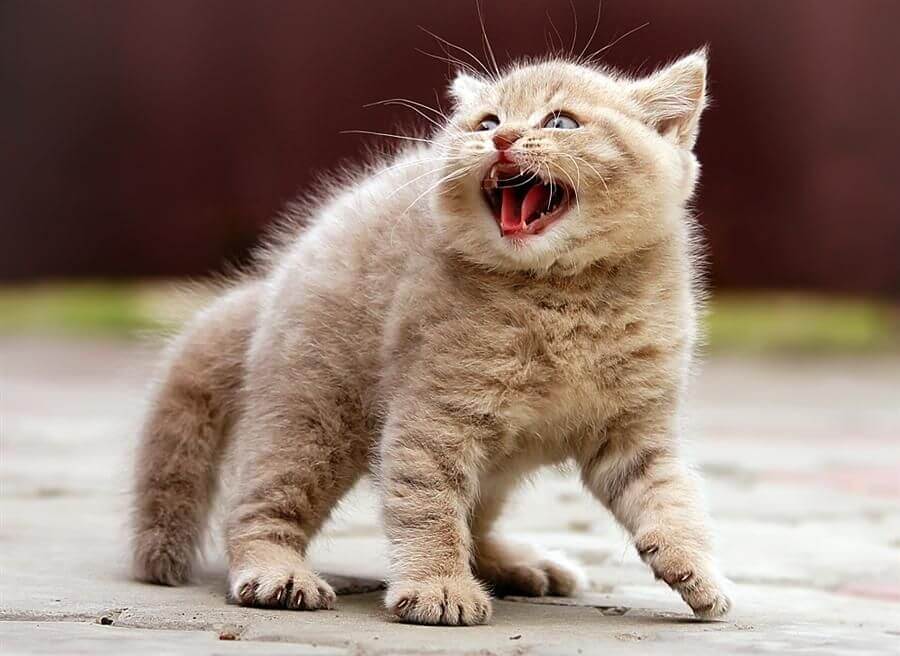 Sometimes a cat’s hiss doesn’t mean it’s unhappy with something. Some individuals hiss constantly. This behavior is typical for certain breeds.

Abyssinian cats, Cornish Rex and other active breeds hiss because they lack exercise. A fluffy cat will definitely express its dissatisfaction if it has just washed its face, and a person starts squeezing and stroking it.

But the hissing of Egyptian cats is part of their communication. Naked cats are very easy to get angry, even the cold hands of the owner can become the reason for their anger. Siamese and Bengal cats have an angry disposition, so they often hiss for no reason.

In any case, do not ignore this behavior of the cat. It is very important to determine the reasons for her dissatisfaction, so that in the future it does not develop into problems with behavior or illness of the animal.