Snakes are mysterious animals. A person does not know much about them, of course, if he /she is not a biologist and does not have a passion for the scaly order. Many people believe in the stereotype that all snakes are deadly. This is not entirely true, there are many more non-venomous snake species than venomous ones. Snake venom is not used for entertainment. Most often they use it for hunting, less often for self-defense.

Therefore, most people who have died or suffered from snake bites are to blame for this themselves. Someone wanted to touch the animal, someone wanted to take a picture with it. Of course, accidents are not excluded when a person accidentally steps on a snake. What can he/ she do in this situation? Just protect himself /herself as best he /she can.

This is the list of 10 most dangerous killer snakes 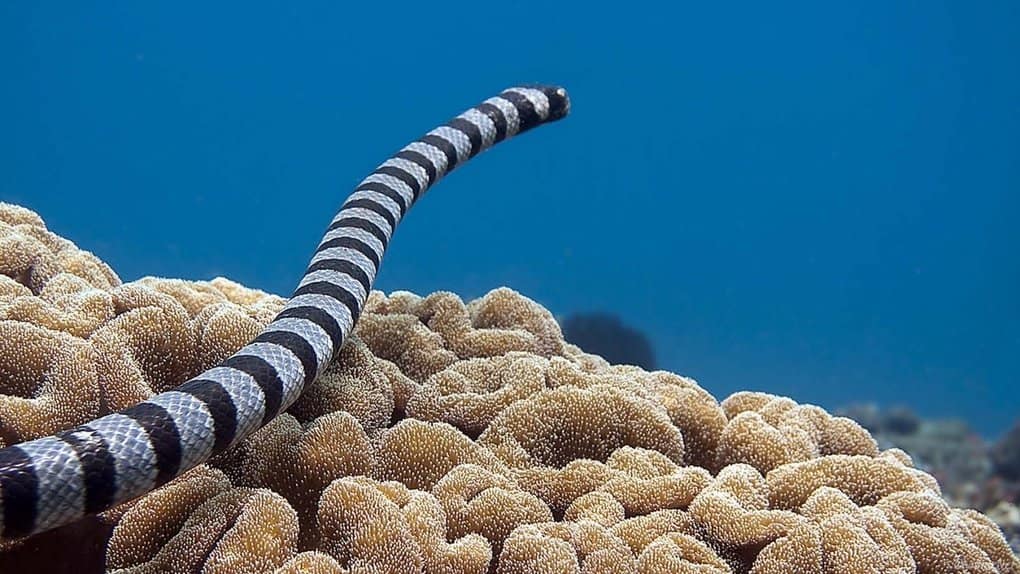 This snake prefers water. It is small in size, reaching up to 1 meter in length. It is painted yellow with dark green stripes. Its habitat is seawater, and it can survive up to 8 minutes underwater. Excellent swimmer, it likes reefs. Belcher is widespread in the Pacific Ocean, mainly on the coasts of Thailand, the Philippines, and several other countries.

Its poison is very strong, 100 times stronger than that of the taipan. However, sea snakes are not dangerous at all. They only attack fishermen when they are caught in the net with the fish. By nature, the Belchers are very calm, so they even wanted to exclude them from the list of the most dangerous snakes. 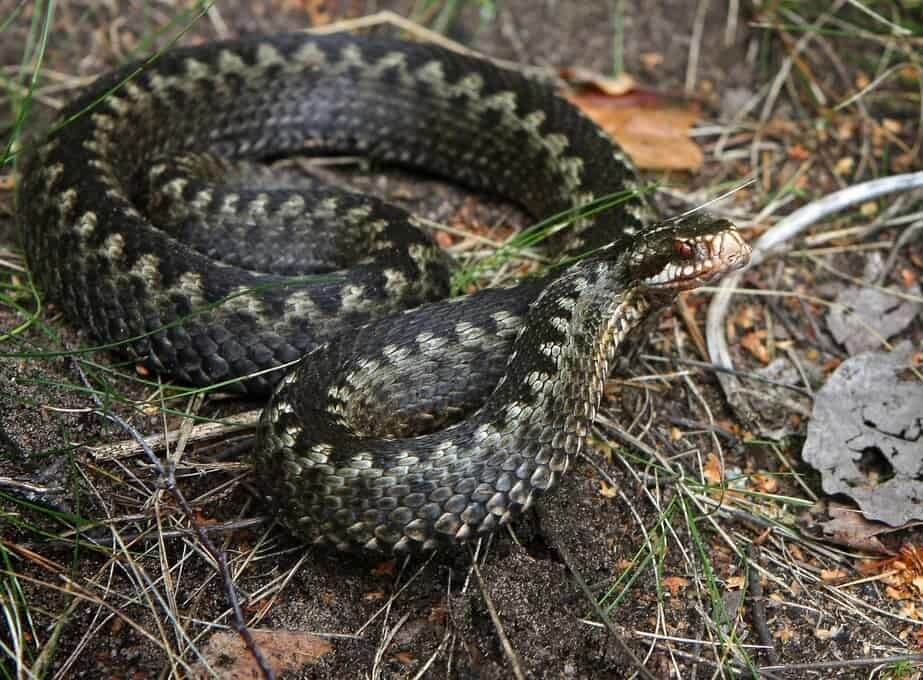 Vipers are usually small in size. In length, they reach no more than 90 centimeters, but such specimens are extremely rare. The color of vipers differs depending on the habitat, they are gray, black, and brown. Unlike other snakes, they are more “hardened”. Their homelands are Europe and Asia and Africa.

The common viper also lives in Russia. It can not be found, perhaps, only in Siberia. But do not be afraid, there are not so many deaths from the bite of an ordinary viper. Most people feel a burning sensation, and there may be swelling. In more severe cases: nausea, vomiting, chills. 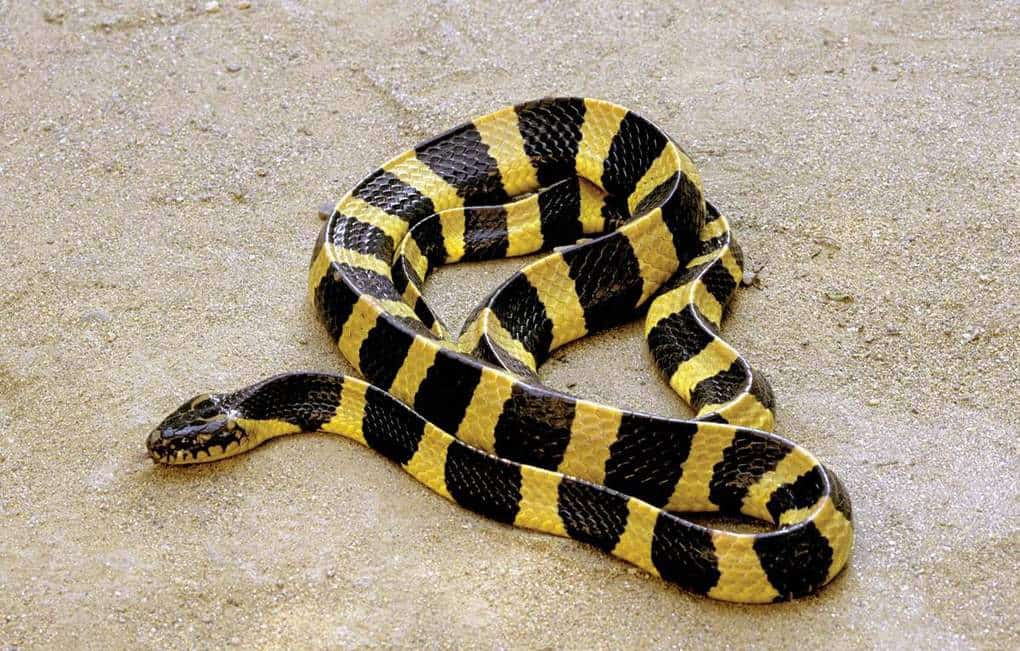 It reaches a length of up to 1.6 meters. The snake has a very interesting color, black stripes on a light yellow background. Its habitat is in Southeast Asia, Thailand, south Bali, Sumatra. Its poison is very toxic. It is not uncommon for a person to die almost immediately after being bitten. If this does not happen immediately, then there is a risk of falling into a coma, dying of paralysis of the respiratory system.

In addition, its venom acts directly on the brain. The Malayan krait is not dangerous if left untouched. These reptiles are active at night, with most attacks occurring in the dark when the snake is out for hunting. 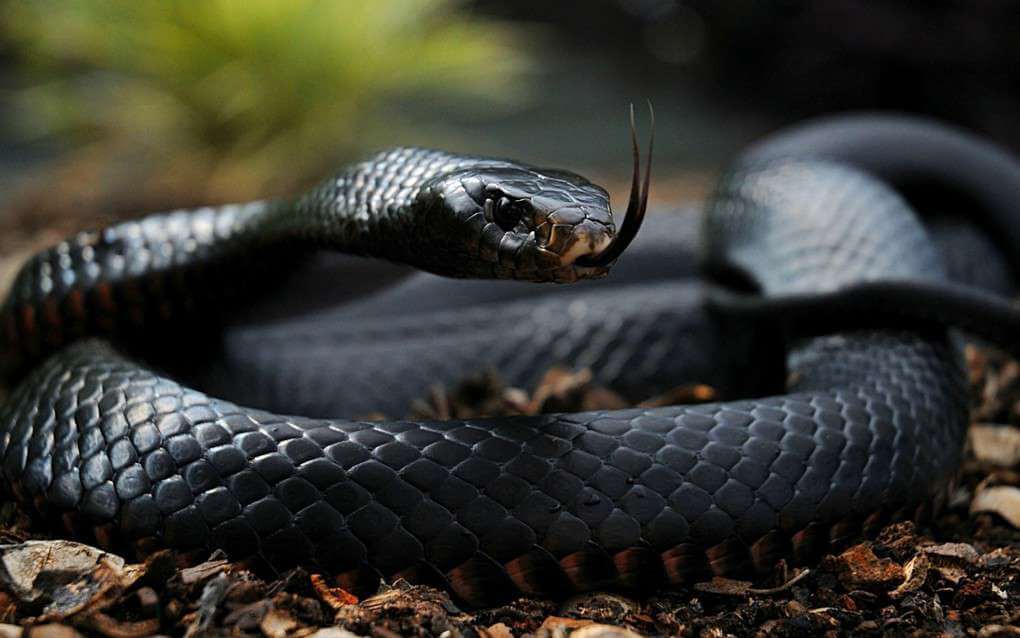 The “Black mamba” is what the people of Africa call it. It is long, from 2.5 to 3 meters, but very light. Its weight does not exceed 2 kilograms. The color doesn’t match the name. Color – all shades of green. The black mamba is common in Africa, but only where the climate is arider, it does not like moisture.

The signs of its bite are similar to those of other snakes. Nausea, vomiting, abdominal pain, paralysis of the respiratory system. Again, the black mamba will never attack a person if it is not threatened by anything. When you meet it, it will try to hide. If you catch the snake by mistake, the bite is guaranteed. 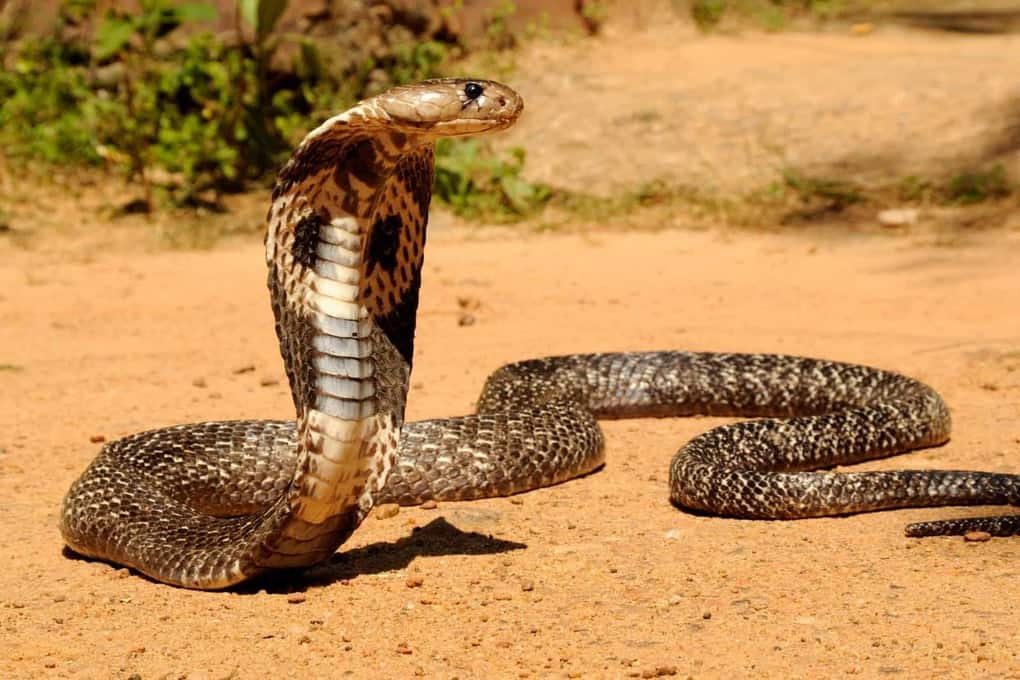 Its second name is the spectacled snake. Rather than a large size, the length can reach from 1.4 to 2 meters, the body is voluminous. The color varies from dark yellow to black. You can recognize a cobra by the pattern of glasses on the so-called “hood”. It can be found in Central and South-East Asia, on the islands of Taiwan and Ceylon, in India.

If a snake bites a person, they can only survive if they receive an antidote within half an hour. Within the first minute after the bite, the victim becomes paralyzed. But an Indian cobra will never bite unless necessary. Not everyone knows that it delivers a warning shot. The reptile sways and hits its head hard. Only then can the cobra bite. 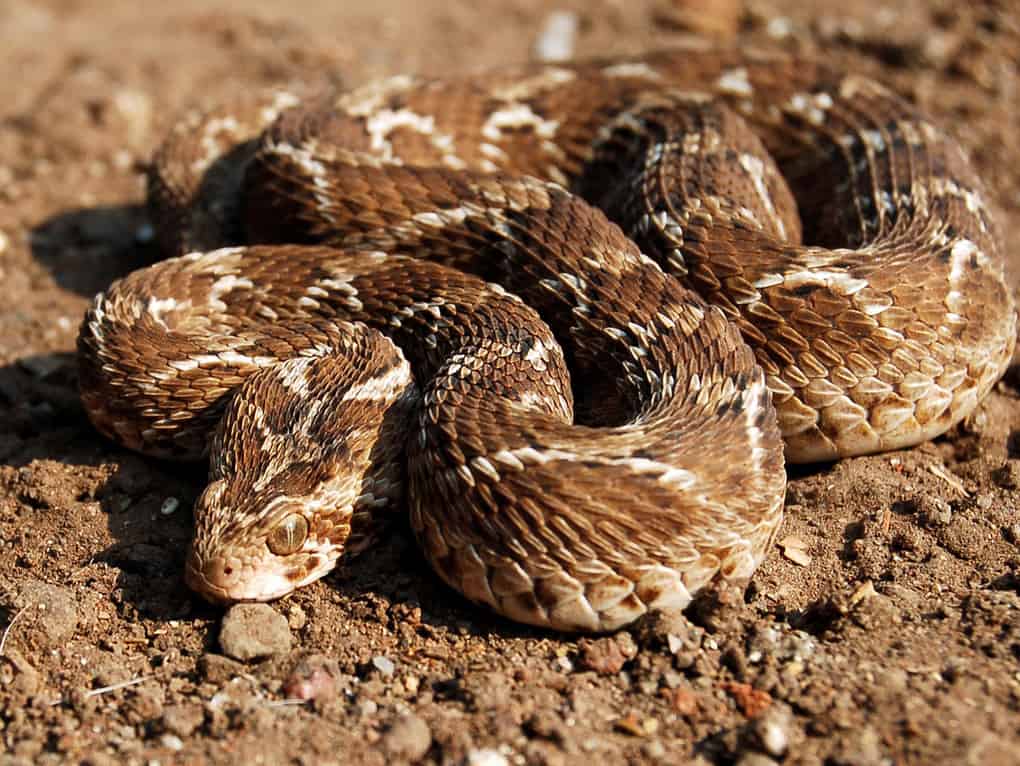 It belongs to the family of vipers. This snake lives in northern Africa and Central Asia. Compared to other snakes, it is quite miniature, reaching a length of no more than 80 centimeters. The color is golden-sandy, large white spots are located along the entire length of the body. The poison of the Echis carinatus can reduce the level of blood clotting.

In case of a bite, heavy bleeding can occur. Although the poison is not the strongest, in the world, every seventh person who died from snake bites was killed by Echis carinatus. But in most fatal cases, it is to blame. Snakes are very fond of abandoned houses. There they settle whole families. Sometimes Echis carinatus settle in the attics of residential buildings. 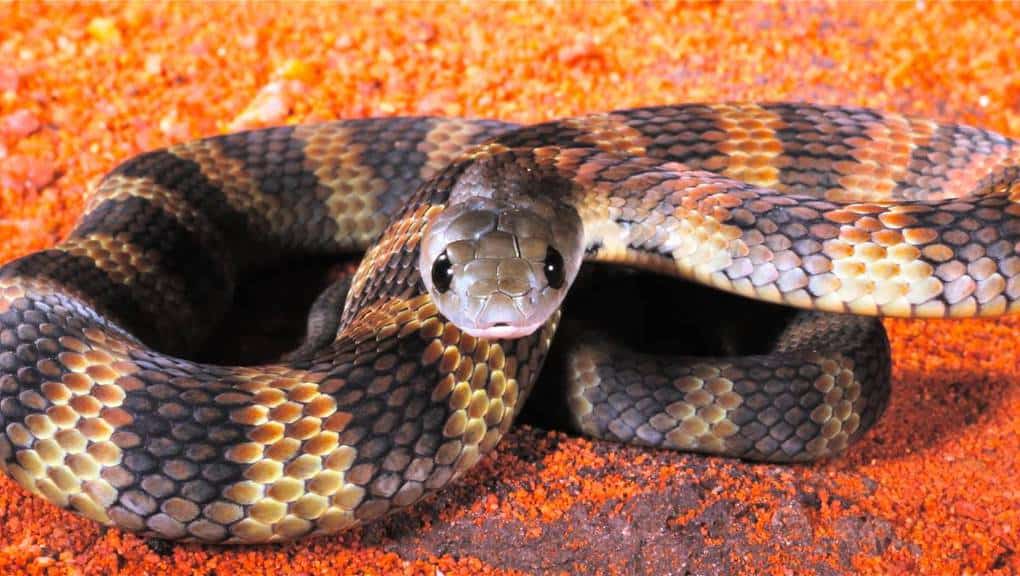 It is found in the southeast of Australia. They are also found in New Guinea and Tasmania but much smaller numbers. Their length usually does not exceed 2 meters. They are distinguished from other reptiles by their brindle color, yellowish rings on a black or gray background. They have a broad head and a massive build.

The tiger snake’s venom is very strong. One snake can kill hundreds of people with its venom. Death comes with lightning speed. The poison causes cardiac and respiratory arrest. But like most snakes, tiger snakes never attack first. They defend themselves if they sense danger. 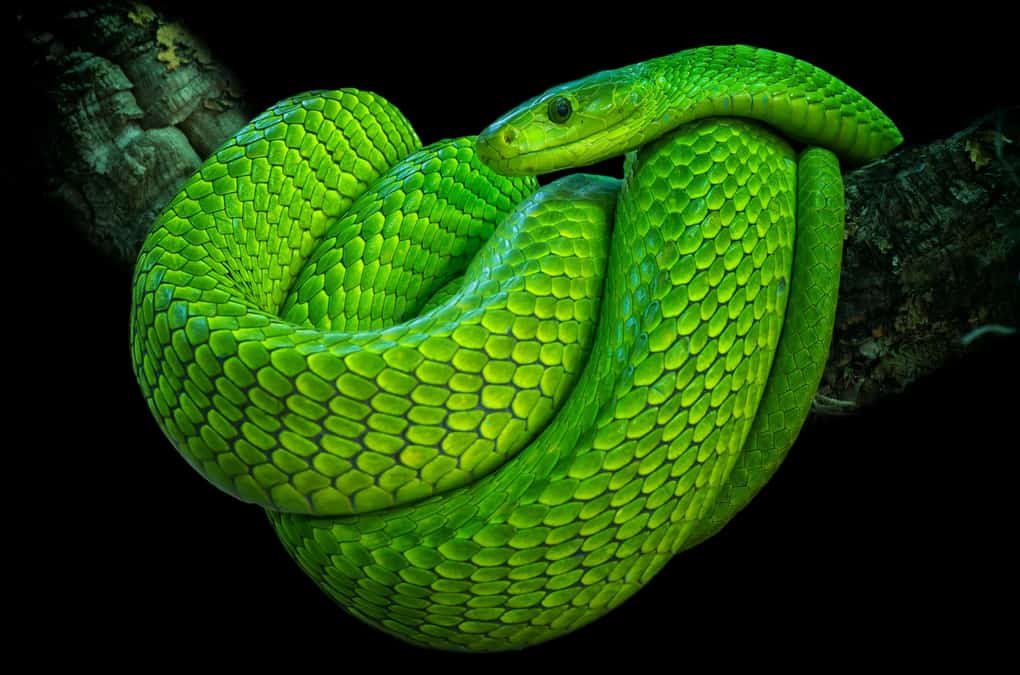 Its habitat is the tropical forests of West Africa. The average length is 2 meters, but there are also larger snakes. They are particularly elegant, the elongated head does not merge with the body, as in most snakes. The color is mostly green. The older the reptile, the darker its skin color. These snakes are very beautiful, but you should never approach them.

Green mambas live in forests, but recently there have been cases of their appearance on tea plantations and even in urban parks. After its bite, a person will live a maximum of half an hour, since the venom of this snake leads to paralysis and necrosis. But it is very timid, and if left undisturbed, it will not harm. 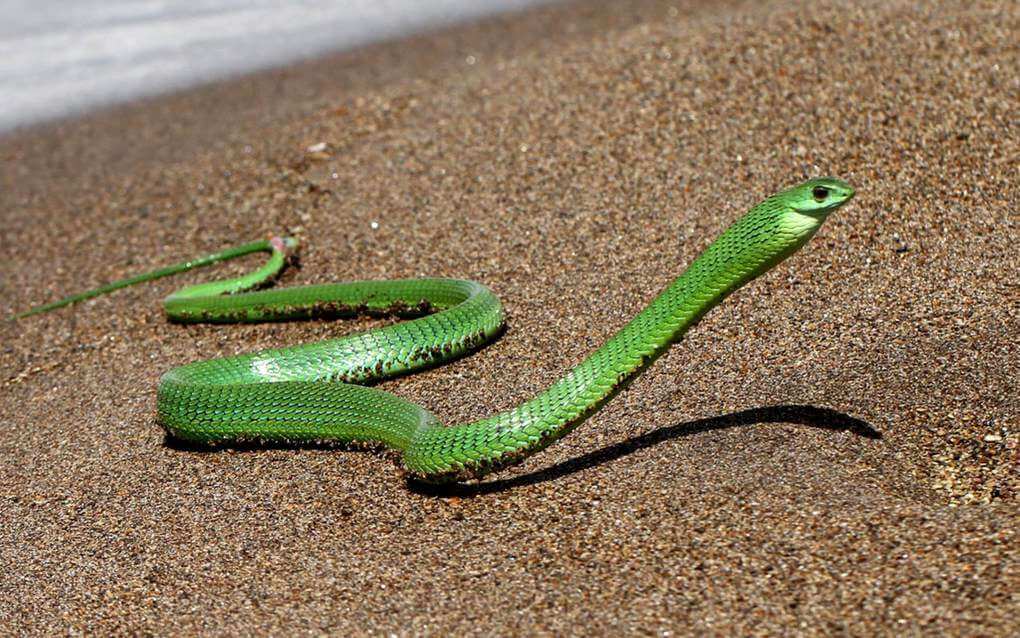 It belongs to the family of grasshoppers. The animal lives in tropical Africa. Their maximum length is 2 meters, but they are usually much shorter. The color varies from light green to olive. There are black, brown colors, or black stripes and spots. This snake is afraid of humans and will only bite if they touch it. If you touch it, you wouldn’t have a chance.

The venom of the African boomslang is very toxic. It enters the bloodstream and will have a destructive effect on the cells and tissues of the body. So, if you meet such a snake on your way, run as fast as you can. 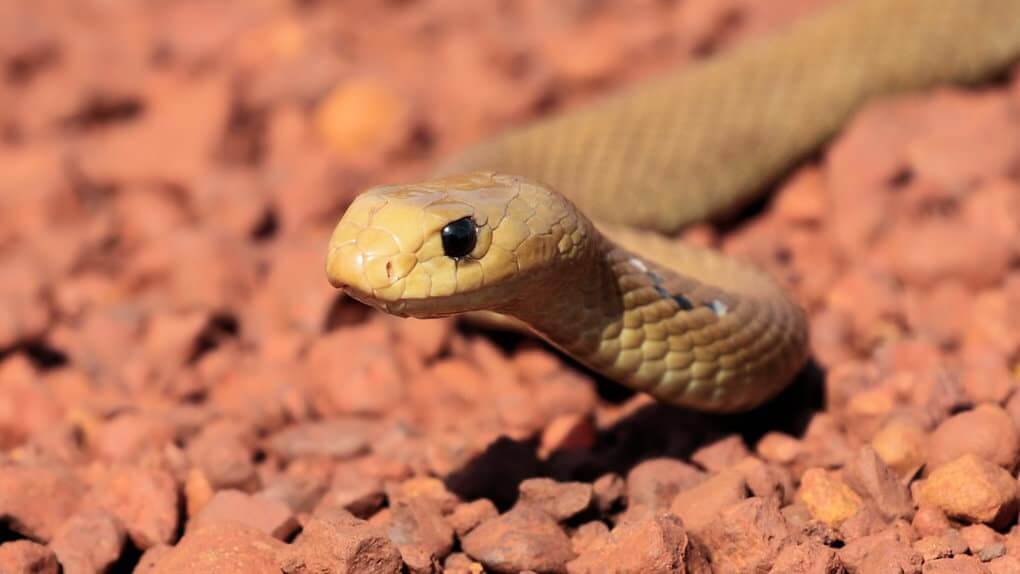 The range of distribution of the animal is mainly the northern part of Australia, it is also found in New Guinea. The length of the snake reaches 2 meters. Usually, Coastal Taipans are brown, only the head is lighter, and the belly is yellow or white. Coastal Taipans are known for their bad temper, they are very aggressive. When the snake changes its skin, as well as during breeding periods, it becomes even more aggressive.

Taipan venom is very fast-acting, a person dies within 4 to 12 hours after being bitten. Although an antidote to taipan venom has been invented, every second person dies from the bite of this snake. The poison causes paralysis of the respiratory muscles. In addition, blood clotting decreases.