Perhaps the most popular mythical creatures among most peoples of the world are the dragons (powerful, terrible, very bloodthirsty, but still inexpressibly beautiful).

In different parts of the world, dragons are represented differently (and therefore they sometimes have very significant differences from each other – both in appearance and in character).

But their common features, as a rule, are a reptilian body structure, phenomenal invulnerability, often-magical abilities, and the ability to control the elements.

Classifying these legendary monsters is very difficult because even in one region, the local mythological tradition can contain descriptions of up to several dozen species and subspecies of dragons (and in different sources, the description of even the same species may not only not coincide, but also be directly opposite).

In addition, the fantasy genre beloved by many of us has recently made its adjustments to the already very difficult situation with the “dragon bestiary”, generously adding a couple of hundred more different dragon-like beasts-from ghostly and magical to metal cyberpunk.

Well, let’s try to choose from all this set of 10 main types of dragons 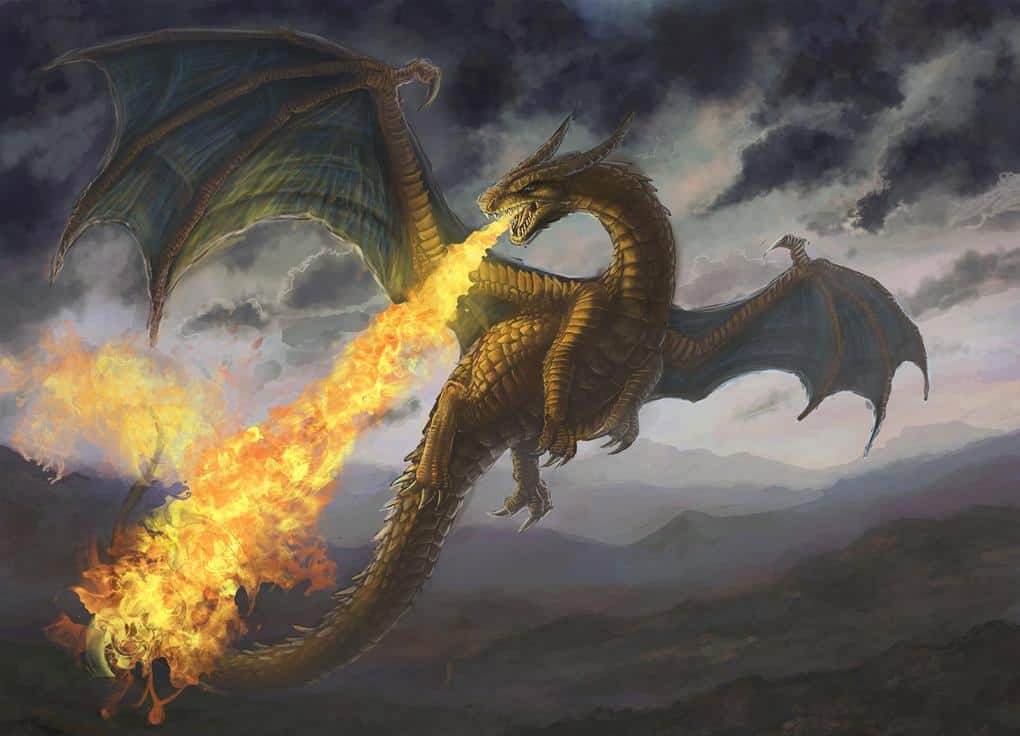 And finally, the most common dragon is the classic European one. Almost all classic dragons are highly intelligent, but still, very often, bloodthirsty, cruel, and mean, because they are accustomed to considering themselves the highest race of terrestrial beings (and, in fact, with good reason!), who are allowed everything. Many people are able (and like) to speak grandiosely.

The appearance of the classic dragon, in principle, we all know. Their size, on average, is 14-15 meters in length, 4-5-in height.

Huge triangular (or diamond-shaped) wings allow them to fly far and fast. They can burn entire villages with their fiery breath in a couple of seconds (and sometimes do this for no particular reason, just for fun).

The classic dragon uses dragon magic both for hunting – for example, it can hypnotize or telepathically lure a victim, and, again, for fun (especially if it meets someone interested in something).

According to some reports, European dragons can temporarily assume human form.

Classic dragons live, most often, in large mountain caves. And, as, again, everyone knows, they are very fond of collecting shiny jewelry there. 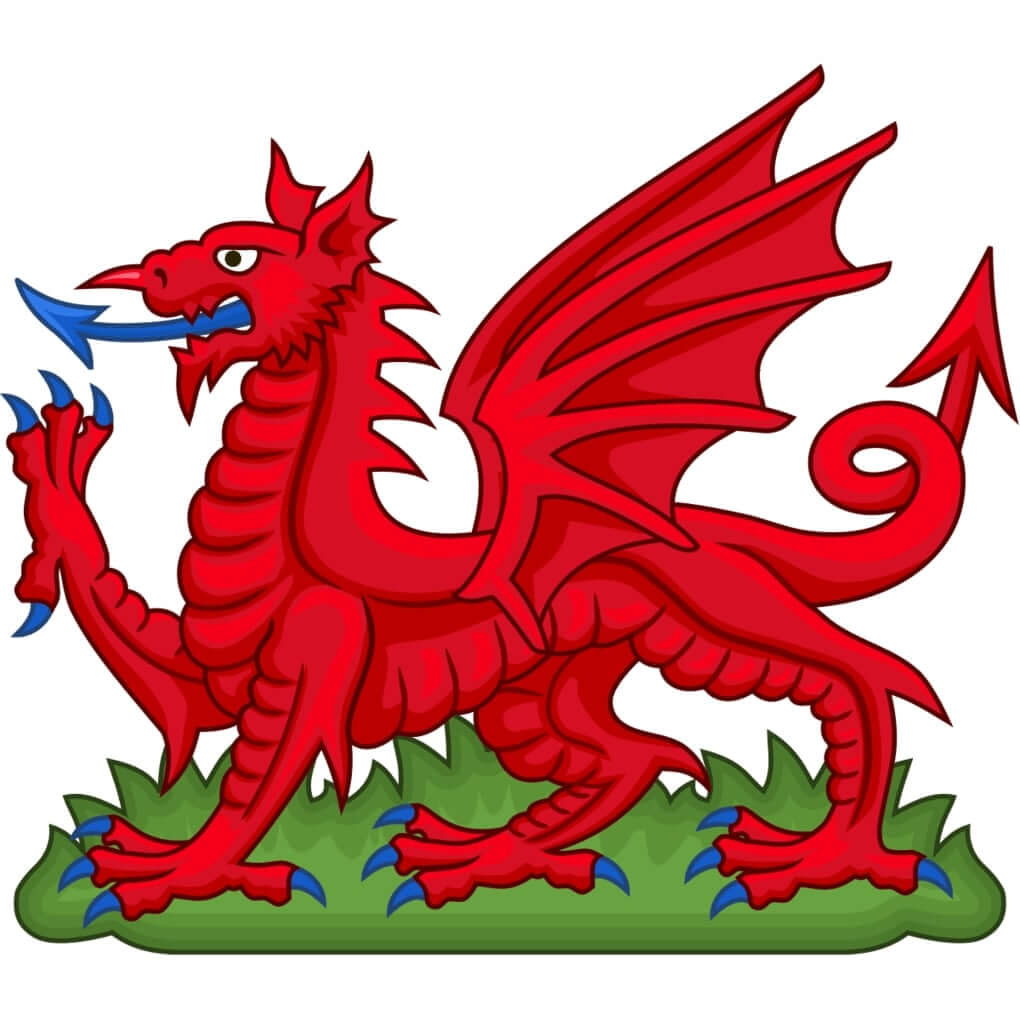 The most dangerous type of dragon, because it has the appearance and some abilities of a classic dragon (magic “chips” like hypnosis and telepathy, fire breath, etc.), but only a rudimentary mind. That is, the heraldic dragon uses all its considerable “natural makings” exclusively “for evil” (mainly for its food).

The heraldic dragon has two pairs of powerful clawed feet, huge fangs, a bony crest along its back, and a venomous “leaf-like” spike at the tip of its tail. In addition, it has rather large wings, but they are almost atrophied, so this dragon can not fly.

The color of the scales (the same diameter as the classic dragon – up to 15 cm each) can be very different, but the most common is dark green, brown, and bright red.

This dragon settles in caves, closer to human settlements – so it is easier to hunt. The heraldic dragon uses magic to draw its prey closer. 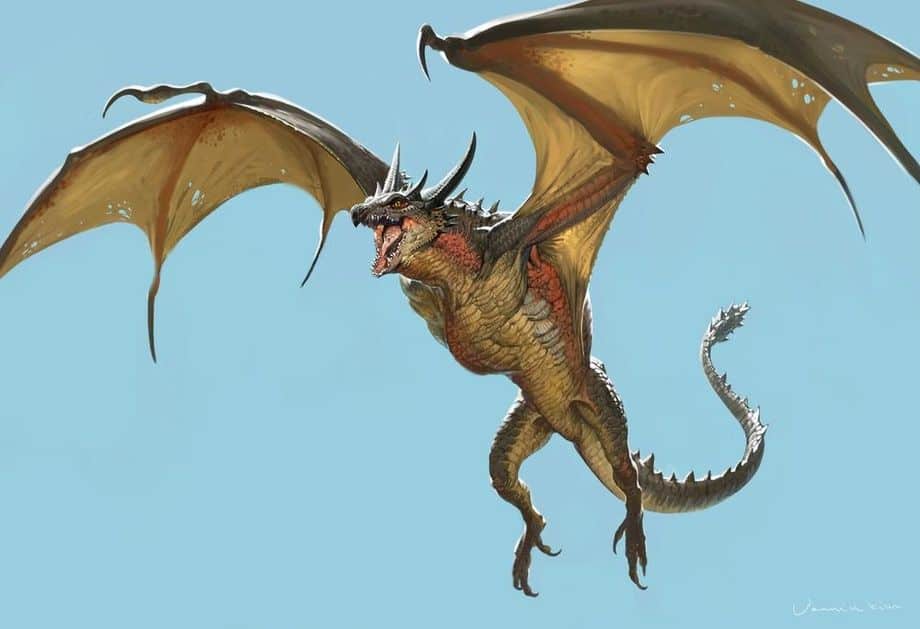 One of the most vicious, cruel, and aggressive creatures (although it has the beginnings of intelligence). The body structure is similar to a huge bird of prey – it has two powerful legs with curved claws and two bat-like wings (at the upper ends of which there is also a long movable claw).

But a wyvern’s head is typically a dragon’s (with two or four horns), and its neck is long and flexible. An even longer and more flexible tail ends in an impressive sting with a sharp edge (with which the wyvern is able not only to pierce its prey, but also to strongly cut it, or even pierce through).

Wyverns range in color from dirty brown and dark green to blue and black. They have very sharp eyesight, can fly very high and fast, while skillfully maneuvering in flight (and therefore it is difficult to hit them with a spear or bolt from a crossbow).

In length, the wyvern can reach 15 meters, in height-6. It nests mainly in the mountains: on cliffs, in caves, etc. It feeds on herbivores, often destroying entire domestic herds. On occasion, it does not disdain human flesh. 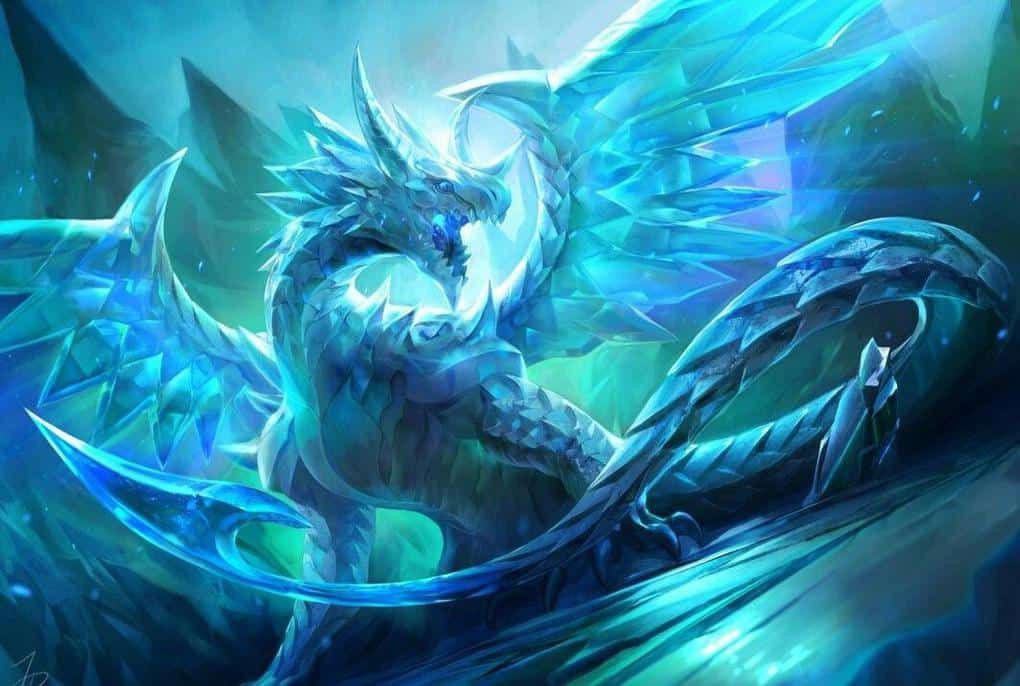 The frost dragon is incredibly beautiful, but also deadly. Its scales, like ice crystals, sparkle dazzlingly on a clear day, and at dusk, it merges with the surrounding shadows.

A long (more than 9 meters) body with four legs has a white (very rarely – with a blue or pink tint) color. The blood of a frost dragon is transparent and has the properties of acid (when it gets on a person’s skin, it burns it).

The main danger of this “reptile” is its icy breath, which can turn any living creature into a frozen block in seconds.

Frost dragons are intelligent and wise, but they are completely self-sufficient (and even selfish), do not get attached to anyone, and therefore never get together.

They make their lair, most often, in a glacier or on an iceberg. They swim well. They migrate from the Arctic to the Antarctic and back. They feed on large marine animals (dolphins, killer whales, walruses, seals, giant squid, etc.), and sometimes on polar bears. 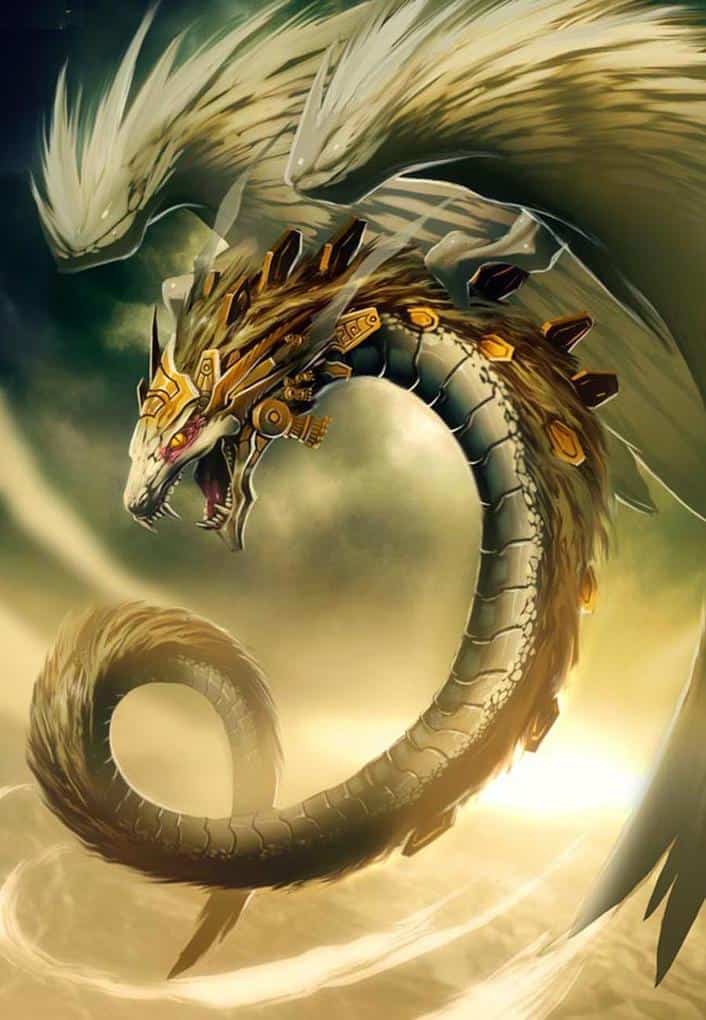 A classic example of Amphiptera is the feathered serpent Quetzalcoatl (one of the gods of the Aztec Indians). The serpentine body of this dragon is covered with long (up to 15 cm) scales, really more like feathers. In addition, it has two large, also feathered, wings (capable of lifting Amphiptera high in the air), as well as very small, undeveloped legs.

Body length up to 14 meters. The head is small, without horns or beard, but with powerful jaws. The color of Amphipteres is most often greenish, but there are also sandy-yellow, “rusty”, blue, and even rainbow.

In addition to Central America, Amphiptera also lives in Africa, in the Nile Valley. They nest, as a rule, in thickets of reeds along the banks of rivers and lakes, often on small islands.

They eat meat and fish. They don’t attack people themselves, but they respond very harshly to aggression. According to some reports, Amphipteres can attack by exhaling fire. 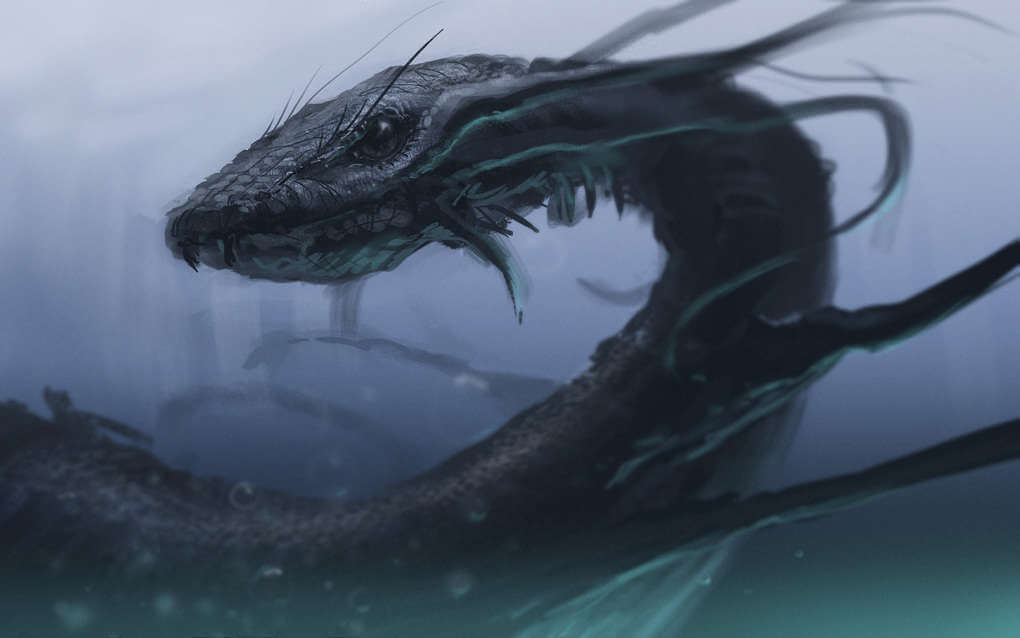 As the name implies, sea dragons live in the sea. They can dive to a very significant depth, but they prefer to spend time on the surface – where you can find much more interesting activities.

Many sea dragons are intelligent, some even know how to talk and like to “communicate” with the crews of passing ships. Communication can consist of both crawling out on the deck and carefully studying everything that is on the ship, and in real conversations with sailors and demands to pay the “transit fee” for the waters of this dragon (with any valuables).

In the case of aggression from the sailors (due to the banal horror of a suddenly appearing monster), the sea dragon can kill several people or break the ship with a blow of its tail (or turn it over).

The length of the sea dragon can be considerable – up to 15-20 meters, color-from pale blue to greenish-blue and blue. More often they do not have limbs (sometimes there are small paws with webs). They feed mainly on fish and marine animals. 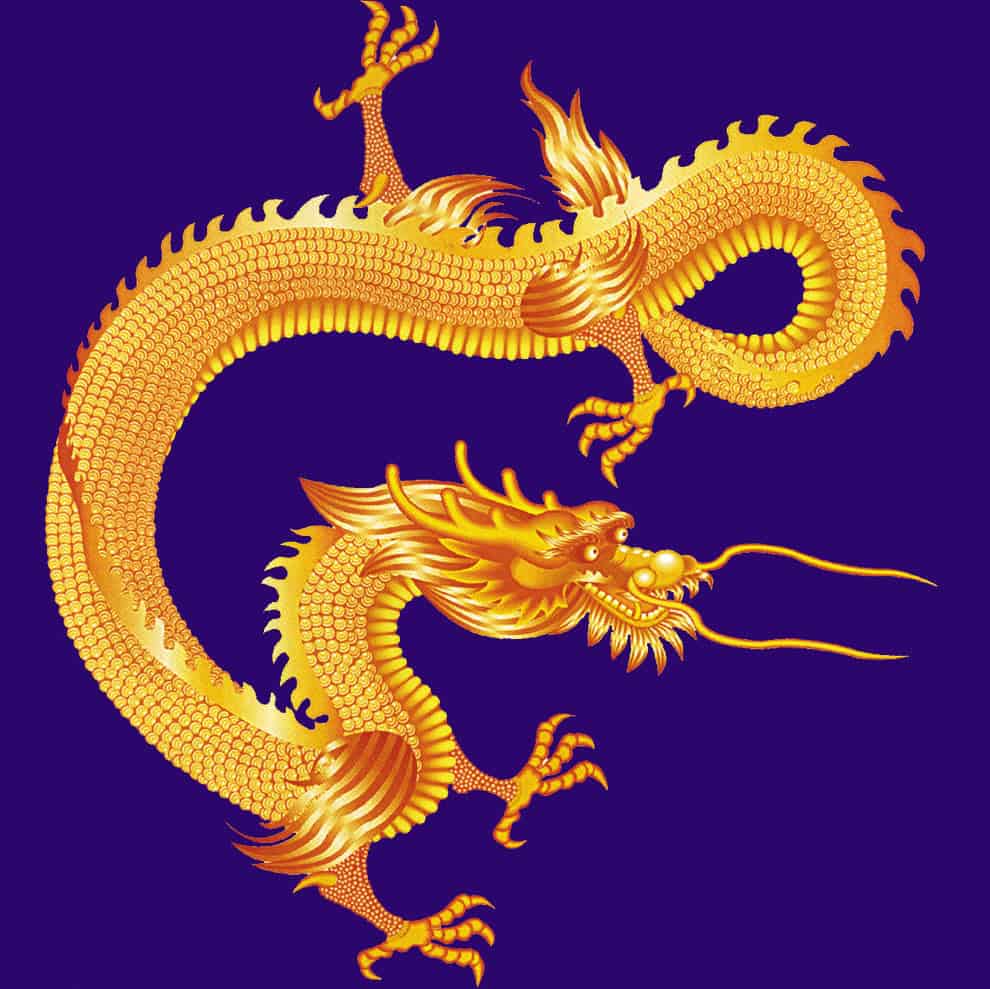 Asian dragons, unlike most Western dragons, are most often not aggressive at all, but on the contrary – wise and friendly (and yes – they have intelligence).

They are depicted in different ways (sometimes with a massive “camel” head, then with a narrow and long muzzle and a protruding snake tongue, then with large ears, etc.).

But, in any case, Chinese, Japanese, Korean, and other Asian dragons always have a long (up to 12 meters) snake-like body with four clawed paws, on the head – horns and a shaggy mane, as well as a very noticeable beard.

They don’t have wings, but they can soar under the clouds because they control the weather. They live in clearwater (in rivers and lakes, sometimes in the sea), feed on pearls and precious stones. They can fulfill people’s wishes. 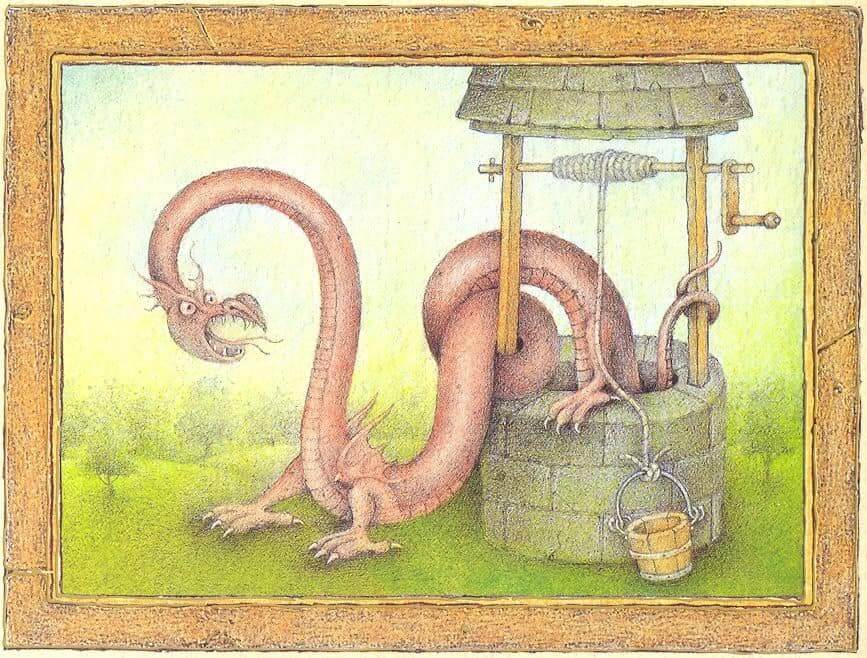 Another dragon is the Knucker. The main differences from Poison Dragon and Lindworm are the presence of two pairs of short legs (but they have powerful claws!) and very small (apparently rudimentary) wings that do not allow flying.

The body length of the Knucker is up to 9 meters, its color is brown-red, brown, greenish-blue. It prefers to settle in old wells, large burrows, and rarely in ponds. There should be many hares, rabbits, or other small animals nearby, which this dragon usually feeds on. But sometimes, in the case of special needs, it can attack livestock and people (especially children).

Another special feature of the Knucker is its venomous fangs, which kill small creatures outright and paralyze large ones for up to 4-5 days. The presence of intelligence is also questionable. 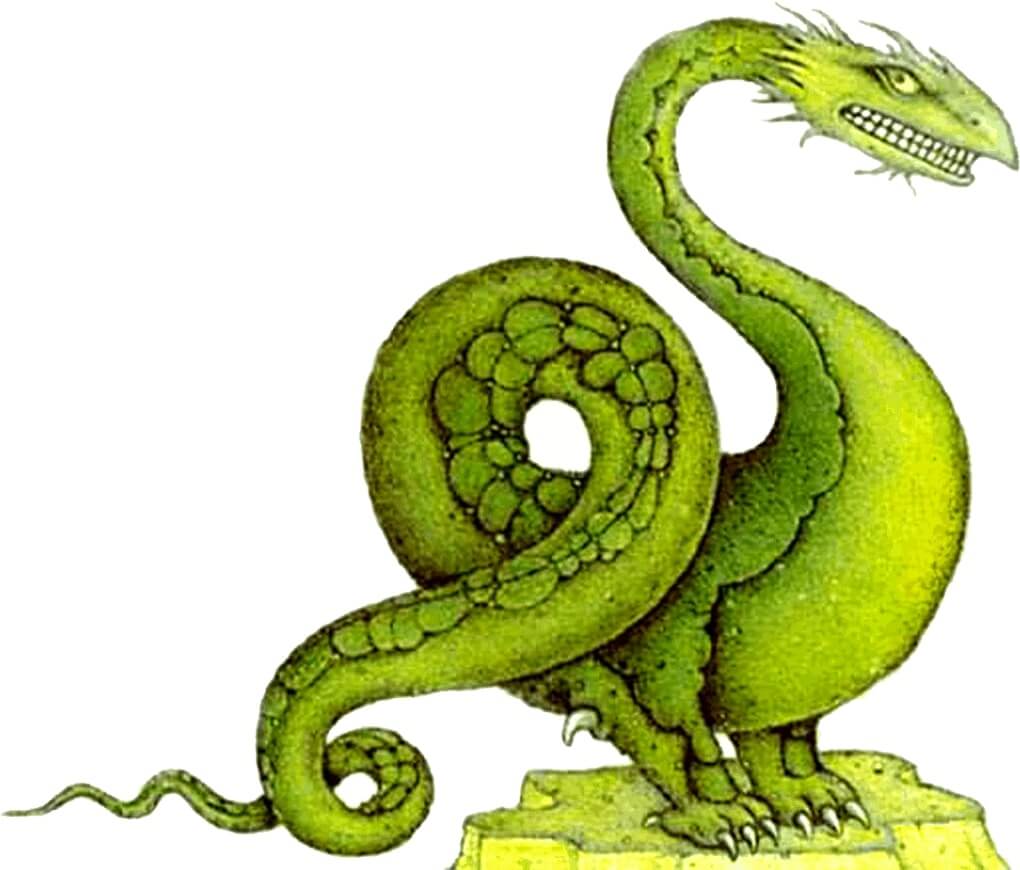 The Lindworm is very similar in appearance to the Poison Dragon (it is also snake-like), but there are several major differences: the Lindworm’s head is smaller and somewhat resembles a bird’s (it has a horn formation similar to a slightly curved “beak”); and in addition, this reptile has two small front legs, on which it can nevertheless move at the speed of a running pony.

Lindworm lives in small depressions in the ground in the steppes and deserts of Central Asia. Its length reaches 9-11 meters, the color of the scales is beige, sand, sometimes greenish or brown.

Lindworm is not intelligent, eats only meat (it usually suffocates its victims), but it rarely attacks people. 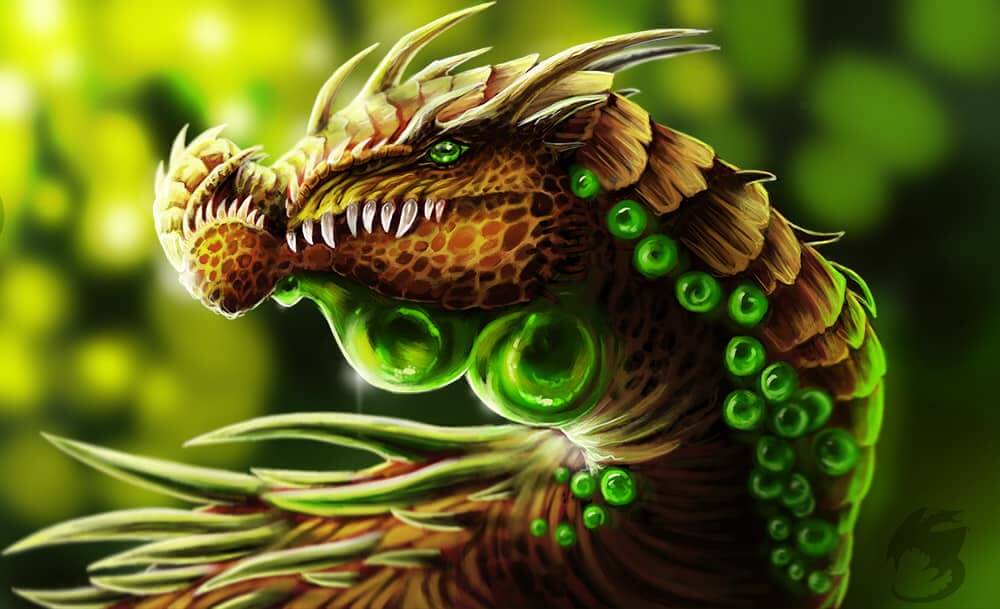 In appearance, the Poison Dragon can easily be mistaken for a huge snake, since it has neither legs nor wings. But his head is typically dragon-like – very massive, with spiked horns and a characteristic “beard”.

The scales of the Poison Dragon (unlike most dragons of other species) are very small, almost fish-like – up to 1 cm in length. Their color can vary from dirty beige and green to blue.

The Poison Dragon’s skin secretes a poisonous slime, and therefore, if it suddenly wants to climb into the well, the water there will be permanently poisoned. In general, Poison Dragon prefers to live in secluded places with stagnant water – in small ponds, swamps, etc.

These dragons are unintelligent, but they are also very vicious and voracious, so they often attack livestock and humans. Poison Dragons are especially dangerous because of their suddenness – they are difficult to notice in advance, they perfectly “merge with the background”.