Well, who doesn’t know Raccoons, so to speak, “in-person”? Any of us will immediately imagine a sly muzzle with a black “Zorro mask”, small paws-grabbers with prehensile fingers, similar to humans, a thick fluffy tail with black and white stripes, and a funny plump ass sticking out. At the same time, the raccoon stubbornly tries to get into some narrow hole (usually to get out of the car). steal something “for lunch”).

Contents of the Article show
Here are 10 interesting facts about Raccoons
1. Domestic raccoons arrange complete chaos in the house
2. Raccoons are omnivores
3. Raccoons have a very high IQ
4. Raccoon paws are a versatile survival tool
5. Raccoons can move quickly even in total darkness
6. Raccoons can descend upside down and jump from a height of 8-12 meters
7. Female raccoons are the most caring mothers
8. Raccoons are immune to most infectious diseases
9. Raccoons love to live in holes, but they don’t know how to dig them
10. Raccoons are native to North America

Recently, many people are trying to get these naughty puffy animals at home, because they are so cute. (What this often leads to, we’ll talk a little later). Do you want to learn more about them?

Here are 10 interesting facts about Raccoons 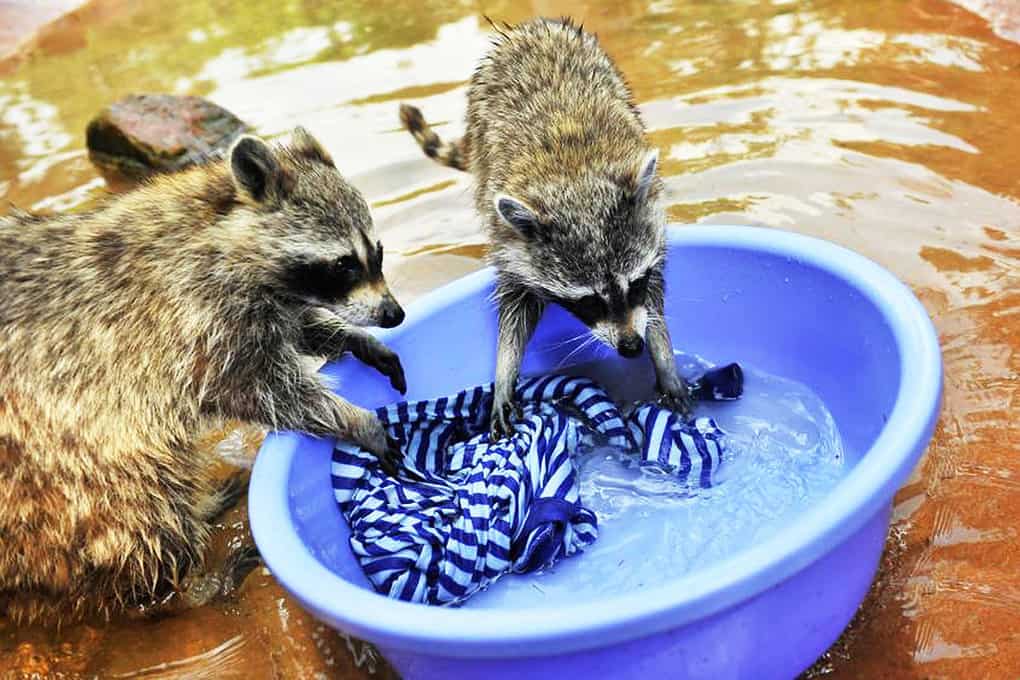 If you still decide to have a gentle raccoon at home, then be prepared – in a couple of weeks, you will most likely want to move out far away, leaving your property to a striped “tenant” in a mask.

Because you can’t stop a raccoon from doing anything – it does whatever it wants. And since its curiosity is boundless, it will open, untwist and gut everything it can reach.

The raccoon will look in all the cabinets and nightstands, check the refrigerator (make no mistake – it will open!), and will constantly run to the bathroom or kitchen to open the water and spend hours rinsing in your things, fruits, and berries, bread, your mobile phone, your grandma’s glasses, baby sister’s doll-yes, everything, what it finds in the apartment and can steal. And before “washing” interesting things for it, the raccoon will also definitely try them on the tooth.

It will hang out on the curtains, suddenly jump on you from the closet, climb under the covers at night and gently (but very unexpectedly) hug you, etc., etc.

Well… If animals could be put in jail, then 90% of the cells would be filled with raccoons – for petty hooliganism. So first thing a hundred times about whether you can bear this pet. 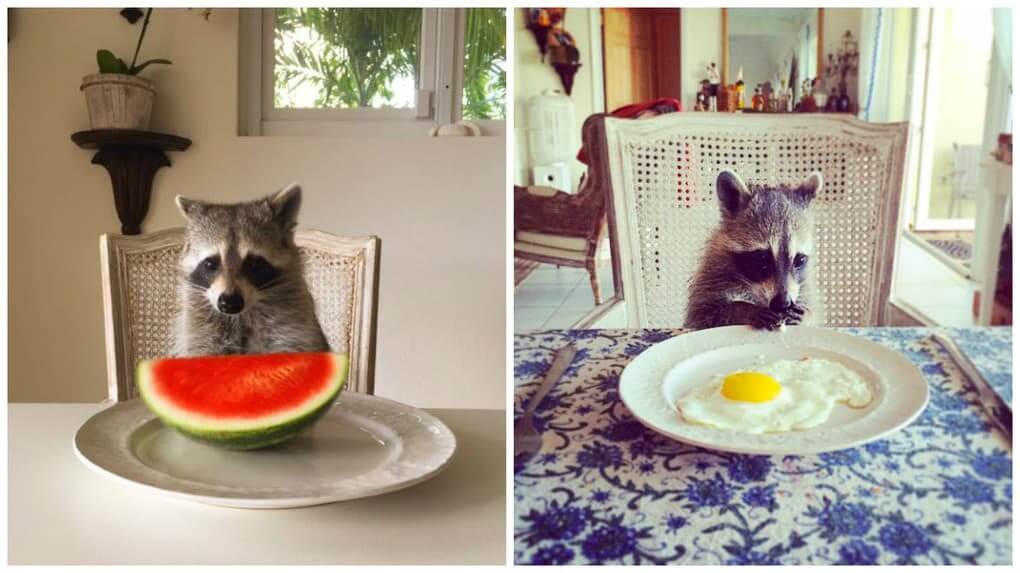 The “inventiveness” of raccoons is especially vivid when searching for food (and this is what they are busy with literally from evening to morning).

Raccoons are considered predators, but in fact, they eat everything. In spring and early summer, these fat-footed robbers prefer a “meat diet” (well, simply because the most delicious fruits and berries are not yet ripe, but they want to eat them every day): with one jump they catch up with small animals – frogs, lizards, crayfish, etc. ., do not disdain beetles and snakes, they can gobble up bird eggs or even chicks.

Well, in late summer and early autumn, raccoons “switch to vegetarianism”: they eat nuts, berries, vegetables, and fruits (and often in the most brazen way they “cover” vineyards and private gardens right before harvesting).

They are not stopped by high fences, nets, bars, or glass or plastic. If the raccoon decided to get something and eat it, then it will do that, you can be sure! Domestic raccoons easily eat macaroni and popcorn (and they like to drink a bottle of beer, right up to the “cut”).

3. Raccoons have a very high IQ 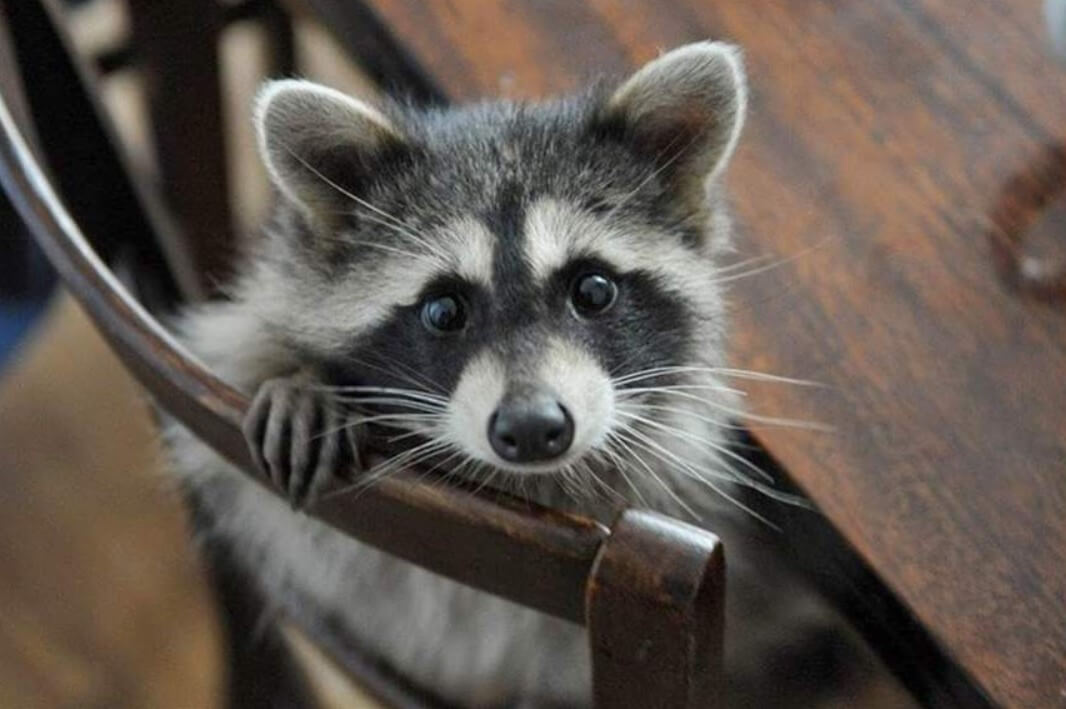 Yes, yes, raccoons are very smart – they are much smarter than cats, and their IQ is slightly lower than that of monkeys. In principle, the fact that these cute puffies are far from fools is even evidenced by their abilities listed just above to “master” a variety of objects in a human dwelling.

Not only that, raccoons are able not only to find ways to get what they like, sometimes even using some kind of improvised (“sub-fingered”) items for this, but also to remember how they did it, so that later someday they will repeat the trick!

In nature, raccoons also behave quite reasonably (well, unless, of course, their habit of sticking their curious nose anywhere and everywhere is not sufficiently reasonable).

In case of danger, they try to quickly leave a suspicious place. And if this fails, then the raccoon gets into a fight, trying to immediately scare the enemy, or uses some other trick (for example, pretends to want to run away in one direction, but it immediately rushes to the other and hides under a snag). Well, if this does not work, then the raccoon falls to the ground and pretends to be dead. 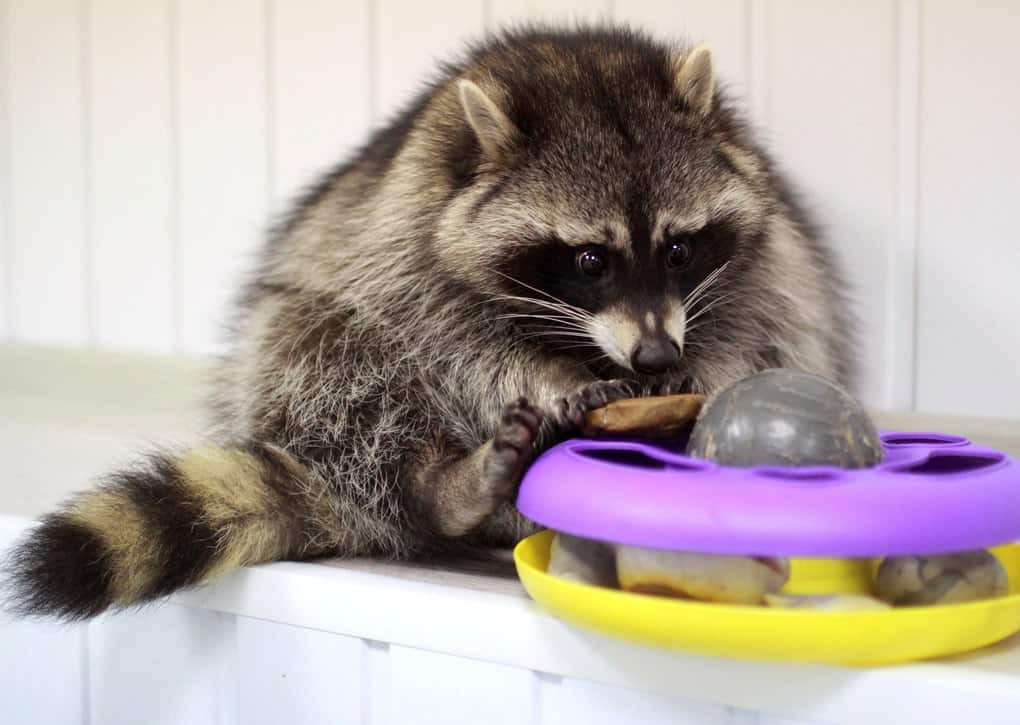 The North American Indians, who noticed that the paws of a raccoon are very similar to human hands, have an old legend that once a raccoon was a man – cunning, unprincipled, dodgy, and thieving.

Once it “got” even the Supreme Spirit with its behavior, it turned the thief into an animal, leaving only its hands as a memory of its human past.

And with these “hands”, the raccoon is able not only to grab and hold pieces of food, catch fish, dig crustaceans and snails in the mud, masterfully hold on to almost any vertical surfaces, etc…, but also easily open container lids, turn door handles and open heck, untie bags, turn water taps and do many other “useful” things.

And, as we have already said, the receptors located on the paws of the raccoon have the greatest sensitivity to the water, so the raccoon checks whether the object found is edible by rinsing it in the nearest puddle (even if it found it in it).

5. Raccoons can move quickly even in total darkness 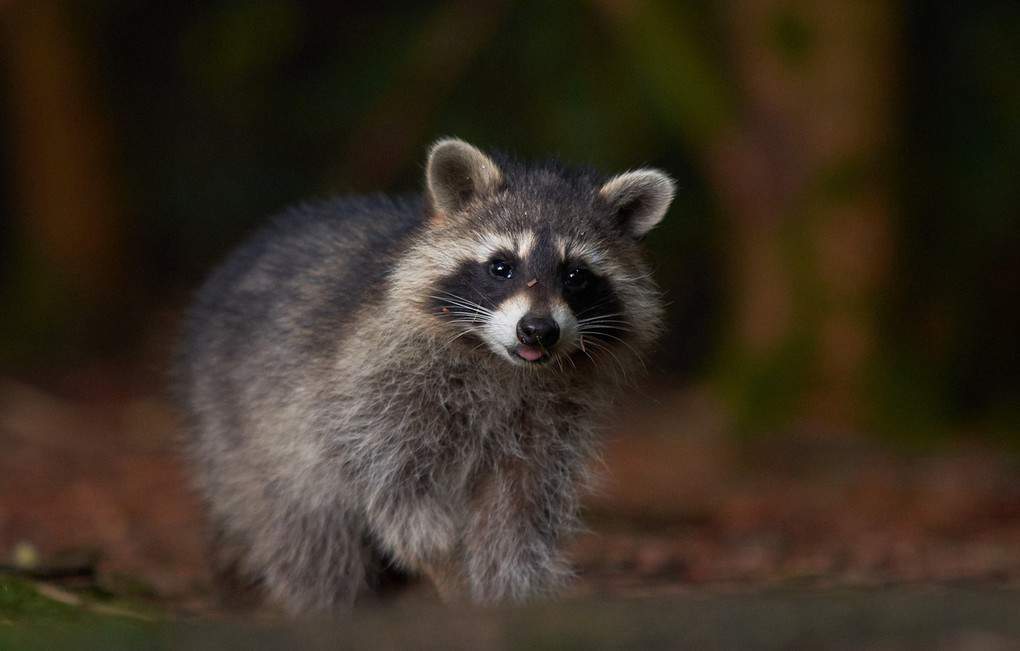 As we said above, raccoons are mainly nocturnal creatures. Moreover, they can rush in complete darkness at speeds up to 25 km / h and arrange real group night “brawls”, rattling garbage cans and trying to get food suspended high above the ground.

And not only (and not so much) special vision and excellent sense of smell help them in this, but also special sensitive receptors located on the stomach, chest, and especially on the paws. They allow raccoons to determine (and with great accuracy!) almost any objects they meet on the way.

That is they do not even have to look under their feet, raccoons can run “by touch”. By the way, these very receptors work best in water, which is why plump people love to “wash” everything so much.

6. Raccoons can descend upside down and jump from a height of 8-12 meters 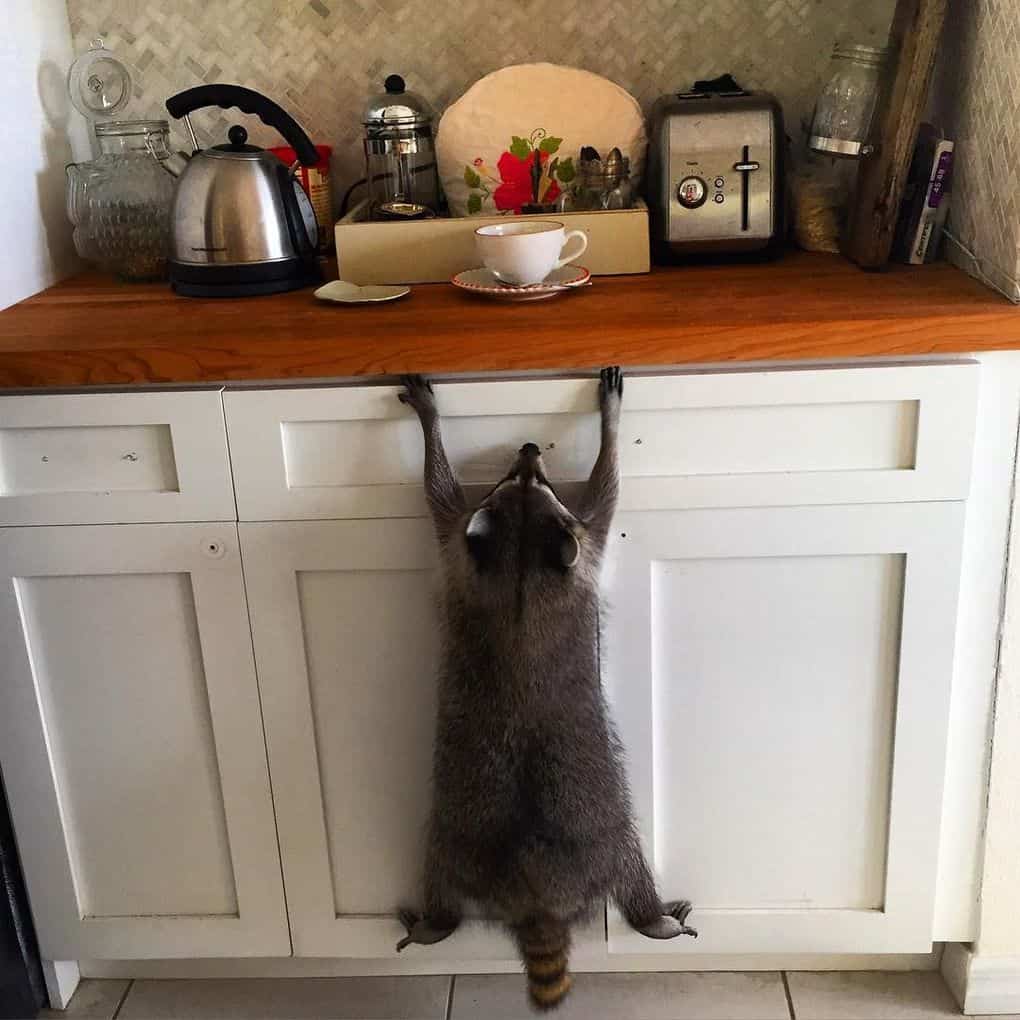 Very dexterous fingers and sharp claws allow raccoons to cling to the slightest ledges and roughness. In addition, the feet on their hind legs are also very mobile (they can turn 180º), which allows these nimble chubby ones to do various acrobatic tricks, including quickly descending a tree trunk or wall upside down, climbing thin branches or along with stretched cables and ropes, etc.

Well, in case of special need, raccoons can jump from a height of 10-12 meters and, without damaging themselves, hide in the nearest bushes (even cats nervously smoke on the sidelines).

7. Female raccoons are the most caring mothers 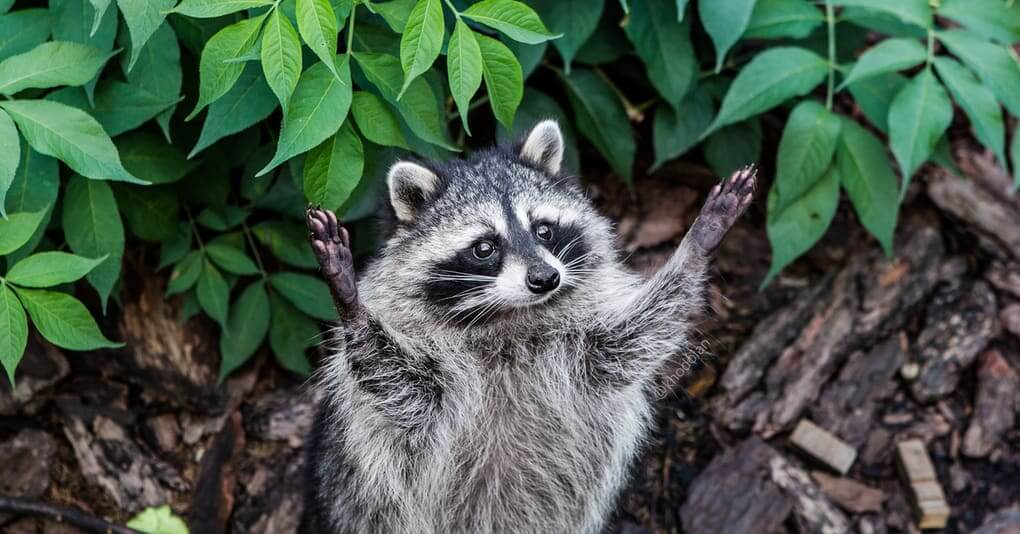 Male raccoons are not engaged in offspring, from the word “completely.” Immediately after mating, the raccoon leaves the female and goes in search of “another love.” Well, the female, having carried from 2 to 7 babies within 63 days, gives birth to them, most often at the beginning of summer, and proceeds to “educate” itself (having previously dispersed all raccoon relatives away).

Little raccoons are born blind and deaf and weigh only 75 grams (their hearing and sight appear only at 3 weeks of age), so, of course, they require a lot of care. Raccoon’s mother feeds them up to 24 times a day. And for an emergency, it sometimes has up to 12 emergency shelters prepared.

Raccoons communicate with their mother using whistles or rather piercing screams (the volume and tone of these sounds depend on what they want – food and warmth or affection). It answers them with rumblings and grumblings.

By two months of age, the cubs are already completely overgrown with fur and become quite independent, and from 4-5 months they are considered adults. If the young raccoon managed to survive its first winter, then it will survive further.

8. Raccoons are immune to most infectious diseases 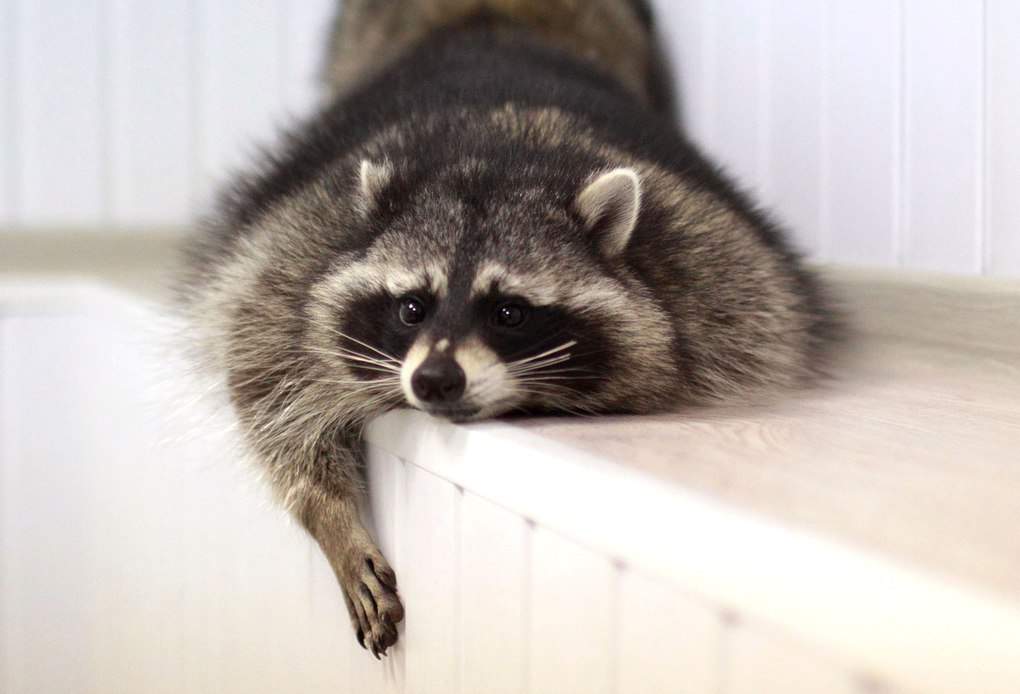 Yes, this is true – raccoons themselves do not suffer from contagious diseases. But, unfortunately, like many other wild animals, they can still be their carriers.

For example, there were cases when raccoons infected domestic dogs with rabies, trying to drive these striped insolent from their territory. One bite in a short fight – and, alas, “goodbye, doggie.”

Therefore, when you meet a cute raccoon in the yard, do not rush to stroke it or, moreover, squeeze and pick it up.

9. Raccoons love to live in holes, but they don’t know how to dig them 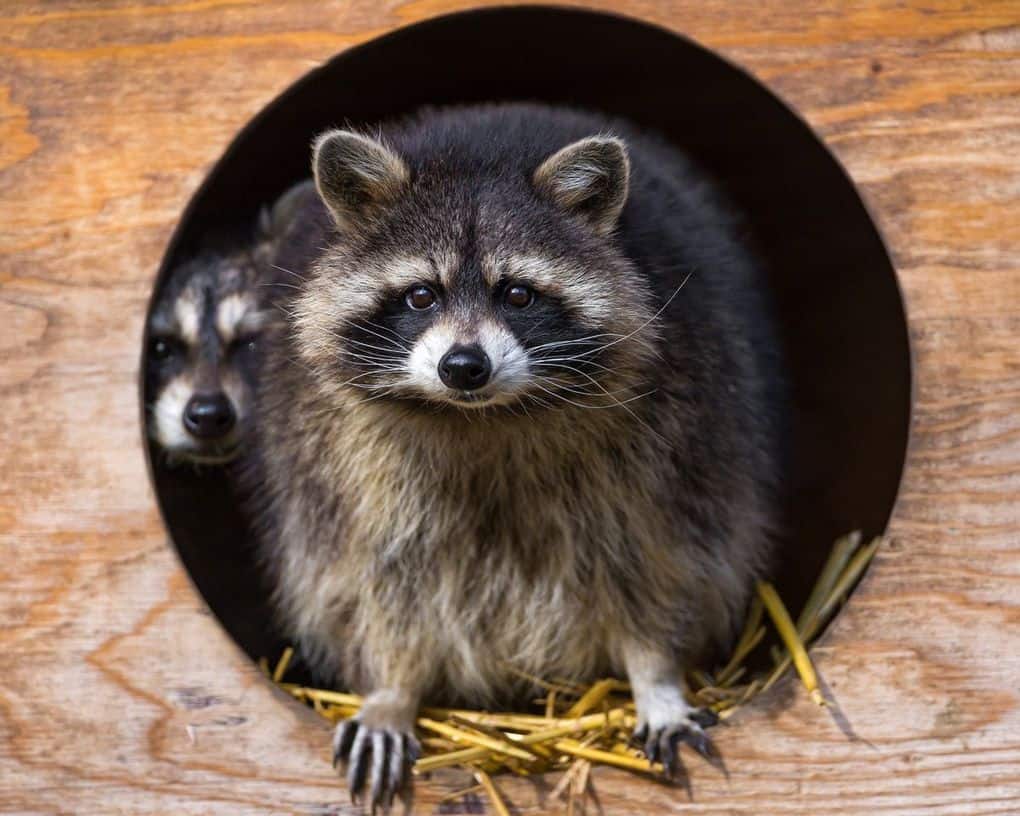 Either raccoon don’t know how to dig holes for themselves, or they are simply too lazy to do it, but at any opportunity, they are happy to occupy someone else’s “real estate”: an abandoned badger hole, a comfortable dry hollow, a roomy and closed crevice in the rock from all sides, etc.

And, by the way, the raccoon prefers to have several such shelters (of course, in case of danger), but it still likes to sleep in the same main thing.

And there must be water somewhere not far from the raccoon’s “estate” – a stream, a pond, a lake (otherwise, where will it rinse its food?).

In their holes or hollows, raccoons sleep peacefully all day (after all, they are, in fact, nocturnal animals), and go fishing late in the evening.

In shelters, they wait out both cold and snowfalls (and striped raccoons living in the northern latitudes hibernate for 3-4 months), sometimes stuffing themselves into a hollow with whole “companies” of 10-14 individuals at a time – it’s warmer, and more fun.

10. Raccoons are native to North America 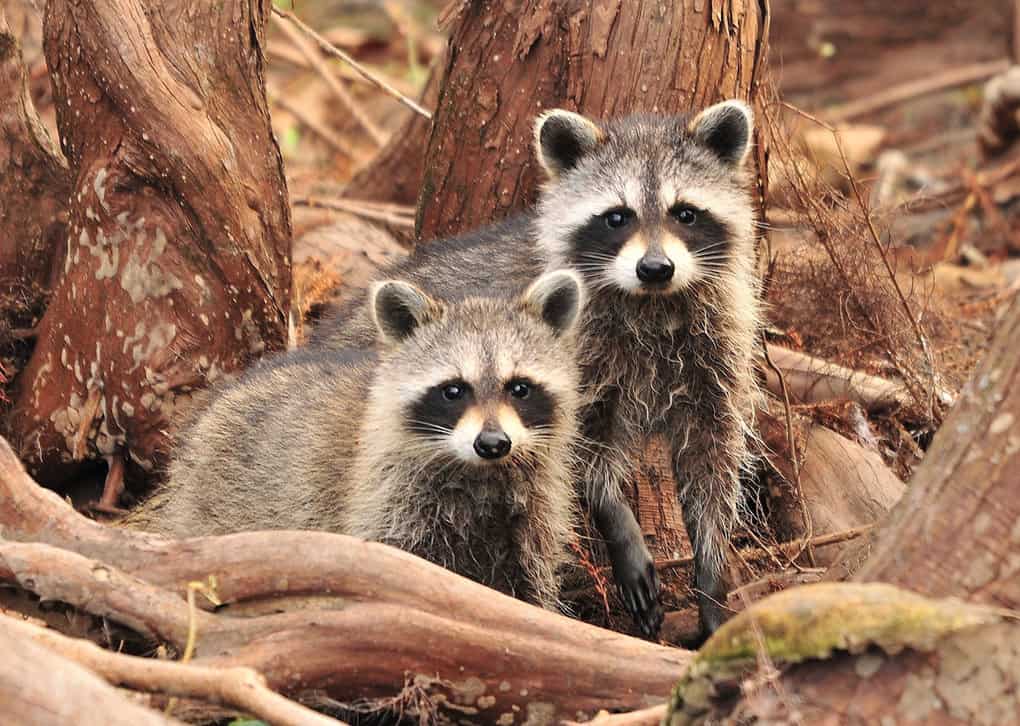 Raccoons were found only in North and Central America. And they are an excellent example of the fact that a person is not only the cause of the extinction of any kind of animal but quite the opposite: raccoons “moved” to other continents thanks to our voluntary or involuntary help.

Often they got to Europe, secretly climbing onto a ship, but more often, of course, sailors and merchants brought these funny and very smart animals quite intentionally.

Now they live in a variety of places – from the tropics to very “cool” latitudes.

Nowadays, raccoons quite often choose forests and parks in the suburbs to live in. Why? Yes, because here raccoons can get a lot more food (and quite easily and simply – there are garbage dumps). For example, in Canadian Toronto, there is a huge number of “urban” raccoons.